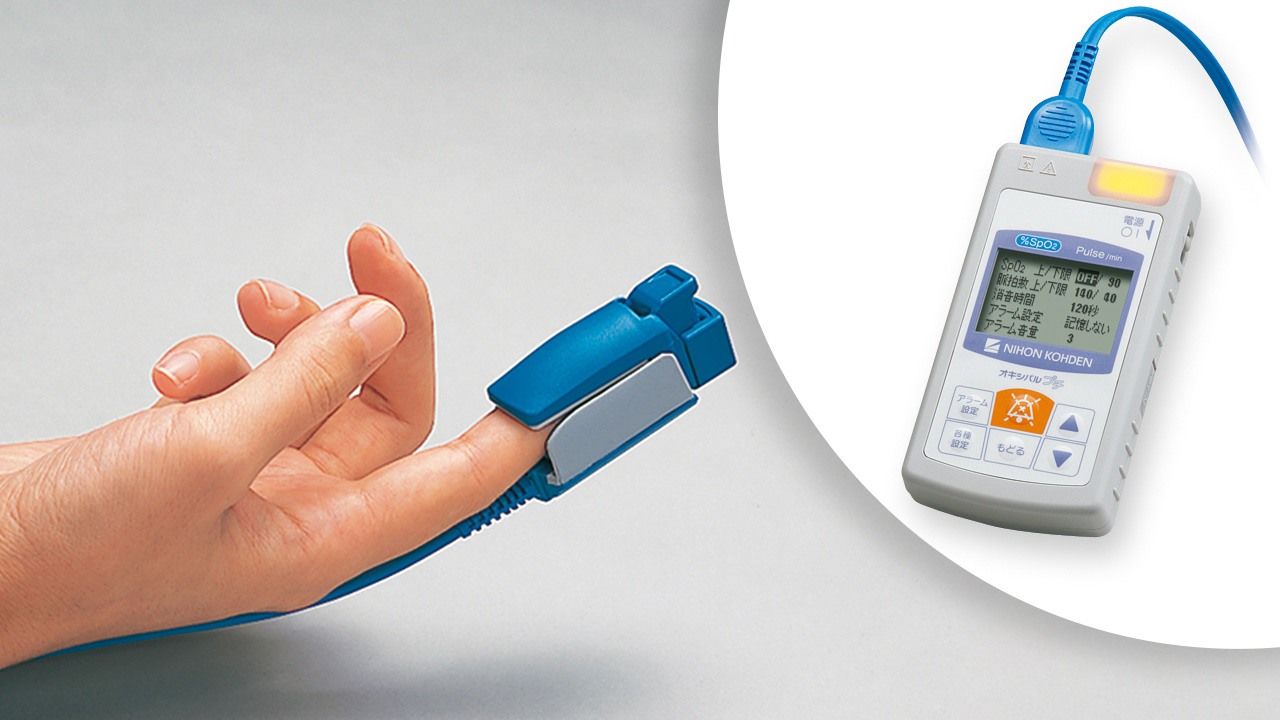 The Japanese Roots of the Pulse Oximeter

Health Technology Dec 3, 2020
Pulse oximeters are gaining attention for their ability to instantly measure blood oxygen levels, a basic yardstick for diagnosing the severity of COVID-19 infection. Here we look at the Japanese roots of their development and the key role of engineer Aoyagi Takuo.

Oxygen as a Key Measure of Health

News of US President Donald Trump’s COVID-19 infection spread around the world, particularly when his medical team announced that his blood oxygen levels had dropped twice, requiring oxygen treatments. Those drops in oxygen would have been caught by a device called a pulse oximeter, which is one of the most widely used Japan-developed medical technologies in the world, though many are unaware of the nation’s role in its history.

A pulse oximeter measures peripheral oxygen saturation (SpO2) in the blood. It works by hitting a fingertip with two different wavelengths of light and analyzing the light that passes through without being absorbed to determine the color of the hemoglobin in blood. More oxygen absorption gives hemoglobin a bright red color, while less absorption leads to a darker red. Quantifying the intensity of blood color offers a direct measure of the concentration of oxygen in blood.

The device itself has become quite compact and easy to use, requiring only a small clip, similar to a clothespin, to be placed on a fingertip. It measures pulse and blood oxygen levels instantly, displaying the numbers on an attached display. Full saturation is shown as 100%, but the average range is 96%–99%. A measurement below 90% is considered a sign of hypoxemia and requires immediate treatment with oxygen therapy.

German Karl Matthes (1905–62) and his colleagues proposed in 1935 a method of measuring blood oxygenation using red and green filtered light passed through the ear. The idea became the basis of an ear oximeter, but the device required the ear to be compressed before measurement and heated during the process. The considerable discomfort this caused stood in the way of widespread adoption.

However, in the 1970s engineer Aoyagi Takuo (1936–2020) developed an independent principle for measuring blood oxygenation. Aoyagi earned his engineering degree from Niigata University in 1958, then joined Shimadzu Corporation. He worked there until 1971, when he moved to Nihon Kohden, which made and sold medical equipment. He stumbled on his blood oxygen measurement concept essentially by accident. His key research topic was based on the idea of medical automation as the ultimate form of patient monitoring, and developing non-invasive continuous measurement was key in approaching that ideal. In other words, he worked to develop equipment that could offer clear numerical medical measurements without the need to draw blood. 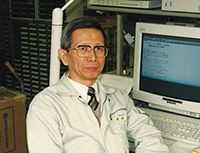 Aoyagi Takuo at a Nihon Kohden laboratory in 1994.

After testing his principle with prototypes in the lab, Aoyagi announced his discovery at a 1974 conference, but it did not garner much attention from medical circles. Its real worth was not recognized for years, in fact. Nihon Kohden developed an ear oximeter based on his principle in 1975, but since its light source was simply a small light bulb, and the light detecting sensor was poor, it was not well received. Still, Dr. Nakajima Susumu at Hokkaidō University’s Research Institute for Electronic Science used a prototype and was the first to publish a paper about it that was later translated into English.

In 1977, Minolta Camera released the world’s first fingertip pulse oximeter, based on independent research. The potential of the Oximet MET-1471 was soon recognized in the United States. Evaluation results indicated that death due to insufficient oxygen levels was unexpectedly common in clinics, that low oxygenation could impact patient prognosis, and that use of a pulse oximeter could allow immediate identification of dangerous changes in blood oxygen levels. It became clear that this equipment would have a major influence on the future of clinical treatment.

The 1980s saw a series of cases in both the United States and Japan where surgical patients under general anesthesia died from low oxygenation, leading to calls for equipment that could measure oxygen levels without drawing blood. At the time, Aoyagi determined that the key challenges in developing a lasting solution would be to craft a device that could stably measure blood oxygen concentration while also being able to respond in real time to sudden changes in that concentration.

In 1980 the company Biox released a pulse oximeter that used light emitting diodes and a computer connection, which solved the stability problem. Anesthesiologist Dr. William New (1942–2017) played a major role in promoting the use of pulse oximeters during anesthesia after he evaluated the Biox device at Stanford University. Recognizing the equipment’s usefulness beyond the respiratory care role that Biox focused on, he established the company Nellcor to improve the devices and promote their use in operating rooms. Nellcor began manufacturing and selling the N-100 model pulse oximeter for surgical use worldwide in 1982.

The path of oximeter development and adoption thus starts with Aoyagi’s discovery, then goes on to Minolta Camera’s release of the fingertip pulse oximeter. Then came Biox’s production of highly stable equipment, and finally Nellcor’s development of more clinically applicable equipment. Arguably, the biggest international recognition came with the commercial releases from US companies.

The Inventor Earns His Recognition

Aoyagi had published papers in Japanese about his work, but never in English. There had been few such examples of Japanese breakthroughs at the time, so the country was not yet known for technological development. Even world-class discoveries can go unrecognized if the discoverer is unable to make the work known to the world, leaving open the possibility that the finds will be overtaken or copied abroad.

Fortunately, Aoyagi soon found an ally in bringing his role in the invention to light. As word of mouth about his achievement spread, Aoyagi came to the attention of the world’s foremost respiratory physiologist, the American John Severinghaus (1922–). He came to Japan to meet Aoyagi in 1987, and then described his achievements in a paper in English. This led to Aoyagi being recognized worldwide as the inventor of the pulse oximeter. 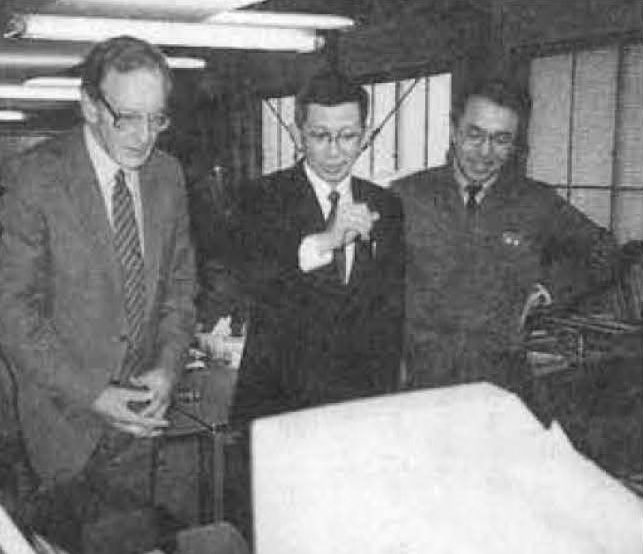 In the 1950s, the rate of fatal anesthesia incidents was one in 2,000. Since the adoption of pulse oximeter equipment, that rate has fallen to one in 100,000. There are roughly 2,000,000 instances of general anesthetic use in Japan every year, meaning that the number of annual deaths fell from 1,000 to 20. This improvement is not due to the use of pulse oximeters alone, but these devices have clearly played a vital role.

Pulse oximeters have contributed to a drop in surgery deaths from hypoxia under anesthesia worldwide. They have also significantly contributed to life-saving improvements in emergency care settings, and have in fact become nearly ubiquitous in the medical field. As the devices have grown smaller, they have grown increasingly common even at small clinics for use in diagnosing colds and other respiratory ailments, and in monitoring posttreatment progress. The Apple Watch Series 6 released in September 2020 even includes a blood oxygenation measurement app to measure oxygenation of the blood flowing through the wrist. It shines green, red, and infrared LEDs on the wrist and reads the reflected light using a photodiode, then uses a cutting-edge algorithm to calculate blood saturation levels based on blood color. It is not sufficient for clinical purposes, but it is still useful for measuring changes in blood oxygenation during exercise. Pulse oximeters are everywhere, now.

In 1997, after giving a speech as special lecturer to the Japanese Society of Pediatric Anesthesiology, Sweden’s Sten Lindahl, a specialist in oxygen biology who was on the Nobel Committee for Physiology or Medicine, said that he wished to nominate Aoyagi Takuo for a Nobel prize for discovering the principle behind pulse oximeters. If the Nobel Prize had been awarded for this invention, it would have been given to Aoyagi for his discovery of the principle behind it, and to Dr. New for helping improve the device and bringing it to worldwide use.

Aoyagi Takuo’s achievements earned him recognition from the US Institute of Electrical and Electronics Engineers, which gave him its Medal for Innovations in Healthcare Technology at a ceremony on June 20, 2015, in New York. Aoyagi was recognized for “changing the face of modern surgery with the invention of pulse oximetry,” and was the first Japanese person to ever win that award. 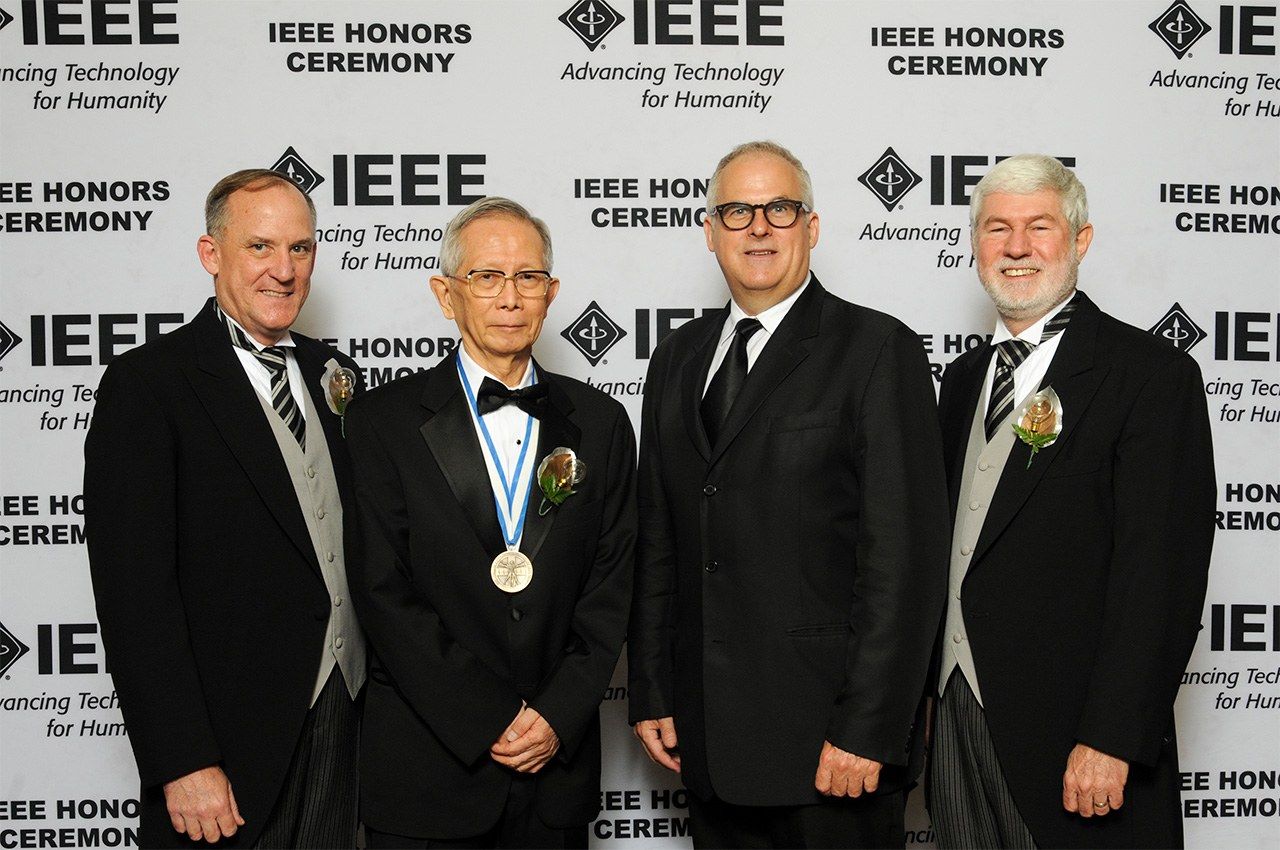 Aoyagi at the IEEE Medal ceremony in 2015.

Saving Lives in the Pandemic Era

Aoyagi passed away on April 18, 2020, when the COVID-19 pandemic was starting to spread in earnest in Japan. He had continued to work on improving pulse oximetry, as well as training those coming after him, up until his last years.

The ongoing pandemic has brought increased attention to pulse oximeters on many fronts. Many patients suffer from what has been called “silent pneumonia,” where they show no symptoms despite their viral infection, until suddenly undergoing dangerous respiratory failure. Medical examinations now routinely use blood oxygen measurements to try to detect this condition earlier. In Japan, when news spread of how light cases of COVID-19 being quarantined at hotels were given thermometers and pulse oximeters to monitor their own condition, household versions sold out at electronics shops nationwide. It seems safe to say that without equipment to simply and accurately monitor blood oxygenation to check illness severity, the number of dead from COVID-19 in Japan could have been much higher.

Aoyagi Takuo’s groundbreaking 1972 discovery continues to resonate around the world today, almost half a century later.

Timeline of the Pulse Oximeter