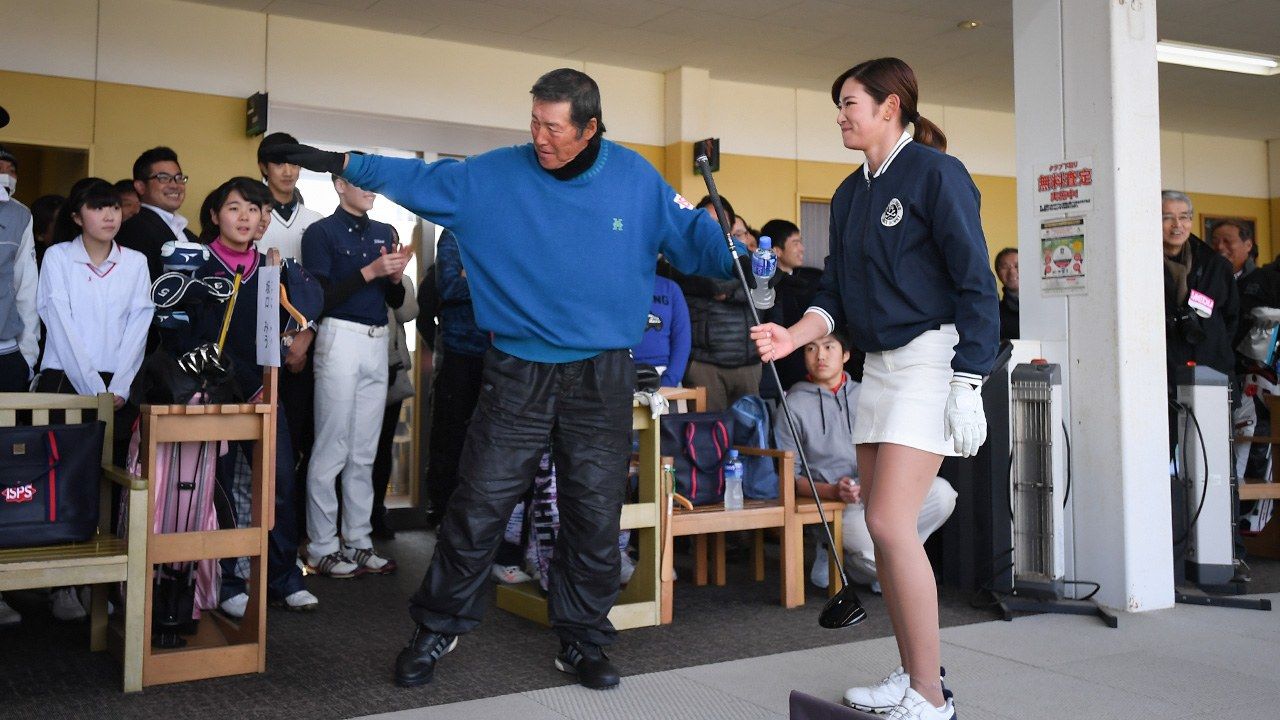 Sports Jan 12, 2021
There is a changing of the guard underway in Japanese women’s professional golf as a wave of young players snap up major titles and climb the tour rankings. Having honed their game under the watchful eye of legendary linksmen Ozaki Masashi and Nakajima Tsuneyuki, these rising stars are set to dominate the Japanese tour.

The 2020 Japan Ladies Professional Golf Association Tour has been one to remember. Teeing off in June after a four-month delay due to the coronavirus pandemic, it quickly turned into a showcase of young talent. Rookies Saigō Mao and Sasō Yūka joined recently emerged stars like Hataoka Nasa and Shibuno Hinako in contending for titles and notching victories to climb the money rankings. The rapid ascension of a new crop of under-25 players has thrilled fans while also drawing attention to the academies where these golf prodigies honed their games.

Two names closely connected with the rise of Japan’s new batch of raw female talent, Ozaki Masashi and Nakajima Tsuneyuki, are legends in their own right. In their heyday, the pair joined Aoki Isao to form the AON trio that dominated the Japanese men’s tour from the 1970s into the early 2000s. Ozaki, who goes by the sobriquet “Jumbo,” is the most successful Japanese player of all time, with a record 113 career wins. Nakajima, better known overseas as “Tommy” Nakajima, is third behind Ozaki and Aoki on the all-time wins list with 48 titles, not including his seven trophies on the senior tour. Since stepping out of the spotlight, the pair have put their decades of experience to work at their respective golf academies, to spectacular results.

Ozaki’s acolytes arguably made the biggest splash on the 2020 circuit. At the June opener, 19-year-old Saigō surprised the competition in her professional debut by remaining in contention before eventually settling for fifth, just two strokes behind winner Watanabe Ayaka. In August, Sasō, who turned 19 in June 2020, snared her first pro title and then went on to notch her second victory the following tournament, making her only the fourth Japanese player to take back-to-back trophies after an inaugural win. In October, Hara Erika powered her way to the top of the scoreboard at the Japan Women’s Open Golf Championship to claim her first major trophy in her third year as a pro, then wasted no time in snapping up her second at the JLPGA Tour Championship in December.

This is not the first time young players trained by Ozaki have impacted Japanese golf. However, up to now most notable members of the “Jumbo army” have tended to be men. Since the golf legend founded his Jumbo Ozaki Golf Academy in 2018 to provide hopeful youths with top-level training during their formative years, though, it has become his female protégés who are thrilling fans with their play. Yamada Ryūta, a pro who coaches at the school, attributes the success of the under-25 players to hard work, saying that “they’ve put in long hours refining their games, and it shows.”

Shibuno, who won the 2019 Women’s British Open in her first appearance in the tournament, and Hataoka set at the head of what some are already calling a “golden generation” of female golfers. But Hara is well on her way to joining their ranks. As a high school amateur she struggled to get results despite her athletic form and her unmatched power in driving the ball off the tee with her 1-wood. Recognizing her unrefined talents, Ozaki took her under his wing when she was in the eleventh grade, and since turning pro Hara has continued to take her game to new heights.

Hara admits to being star-struck when she started training under Ozaki, but insists she remained focused on realizing her dream of being the best player on the pro tour. The first piece of advice from her new coach was about maximizing her clubs. “I hung onto each word,” she recalls. “He told me that the most important thing is to fully commit to my shots.” To do this consistently required her to build strength. 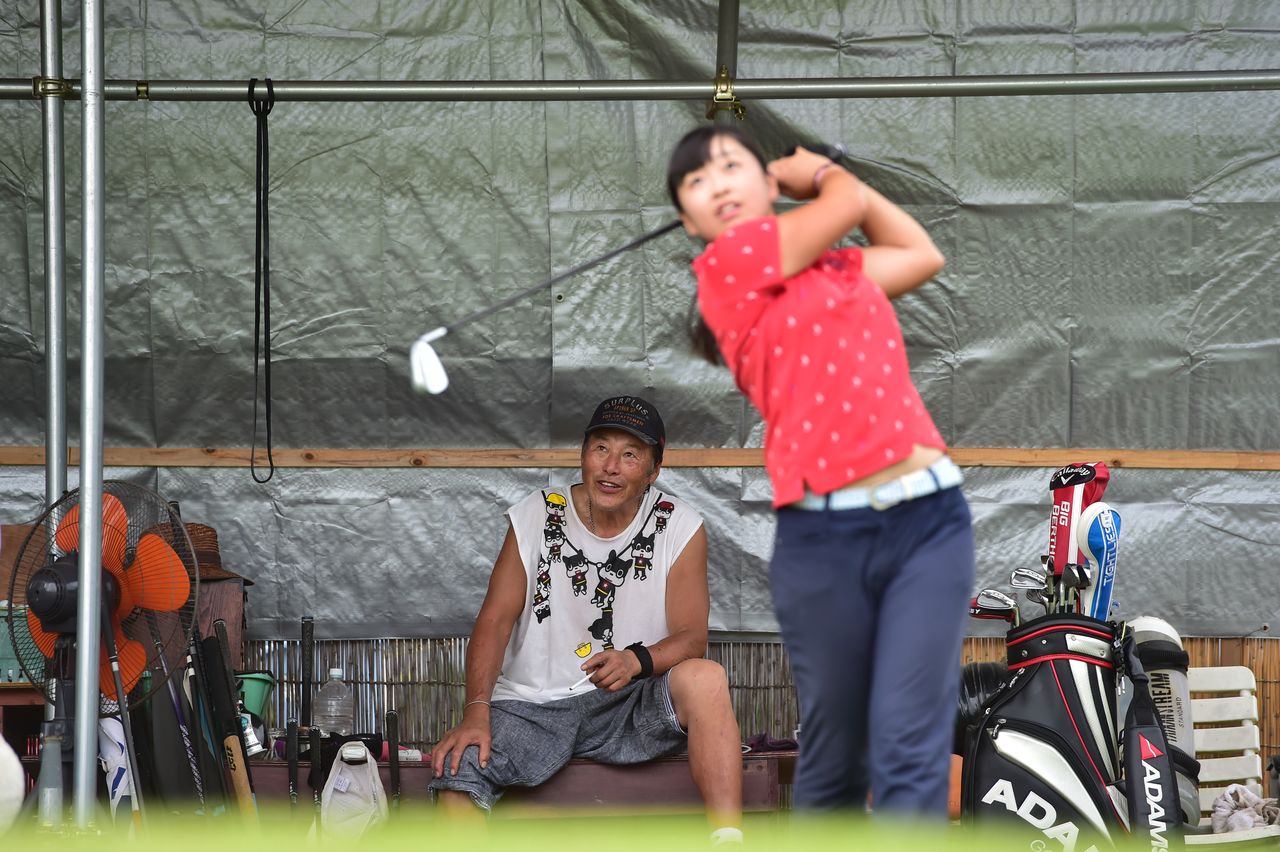 Ozaki has long placed a premium on athleticism over skill. As a tour player, he took the Japanese sports adage “spirit, technique, and strength” describing the three qualities of an ideal athlete and turned it around. “For me, sports start from the body,” he once opined. “It is the foundation on which the other qualities of heart and skill rest.” It is a philosophy he now applies to his pupils.

Players are expected to develop the strength and stamina to swing the club, whether on the tee or the green, with the same power and control for the full duration of training sessions. “Fitness is core to succeeding at the professional level,” states Yamada. The academy coach stresses its importance in preventing injuries and enabling golfers to play consistently over the duration of events. “Someone who is barely making it through practice is never going to win tournaments.”

Hara embraced Ozaki’s approach and jumped right into the same training regime as the male students at the academy. “I don’t think we’ve had a junior player yet who practiced as hard as she did,” Yamada recalls. “Her determination never wavered.”

Ozaki established his golf school, located in Chiba Prefecture, as a way to give back to the sport that has given him so much; a debt he hopes to repay by producing players who will compete at the highest level in Japan and overseas. To this end, he provides his students—who currently number around 40—with every opportunity to develop their game, including access to his private practice facility that boasts a 300-yard driving range, a putting green with bunkers, and even a dedicated space for swing drills.

Practice starts at 9:00 am sharp, with the mornings consisting mostly of strength training like dragging tires and exercises reinforcing basic skills. In the afternoons, students rotate between hitting balls on the driving range and practicing bunker shots.

The rigorous training regime also includes a few “golfing hacks” Ozaki came up with himself. One of these involves players hitting softballs off of batting tees with short, specially weighted clubs to force players to keep their shoulders square. Yamada says the goal is to correct a common habit in younger golfers of dipping their rear shoulder on the down swing and jumping before impact. The truncated clubs, which weigh up to 1 kilogram, do not generate centrifugal force as with standard woods and irons, meaning players must rely completely on their own power to propel the ball.

Although Ozaki is known primarily as a player, he started coaching fairly early in his career. Two of his initial pupils were his own brothers Tateo and Naomichi, both successful pros. His list of past protégés also includes big names in Japanese golf like Meshiai Hajime, Hagawa Yutaka, Higashi Satoshi, Kaneko Yoshinori, and Izawa Toshimitsu.

Encouraging younger players to look to their academy seniors as role models is an integral part of Ozaki’s training approach. As Yamada explains it, a student who goes on to have success on the pro tour inspires younger students to work harder, something he insists has been central to the school producing so many strong female golfers. “I like to hold up Hara as an example for young players. Her dedication to the sport is really phenomenal and shows those still coming up in the system what they can accomplish if they put their minds to it.”

Nakajima, who opened his school Hills Golf Tommy Academy in 2012, takes a different approach to training junior golfers. Along with standard training techniques, Nakajima focuses on drills simulating match scenarios. Each year the school holds several 3-day training camps for junior players ranging in age from elementary to high school students. As part of the practice regime, participants run sprints to get their heart rates up and then head to the course in pairs for rounds of match play.

Nakajima insists that competitive, on-course training adds a level of pressure regular drills lack, providing students with the practical experience they will need to win tournaments. Forcing students to battle it out on the course again and again teaches them to think under pressure and reinforces tactics and strategies necessary to outsmart and outplay determined opponents. 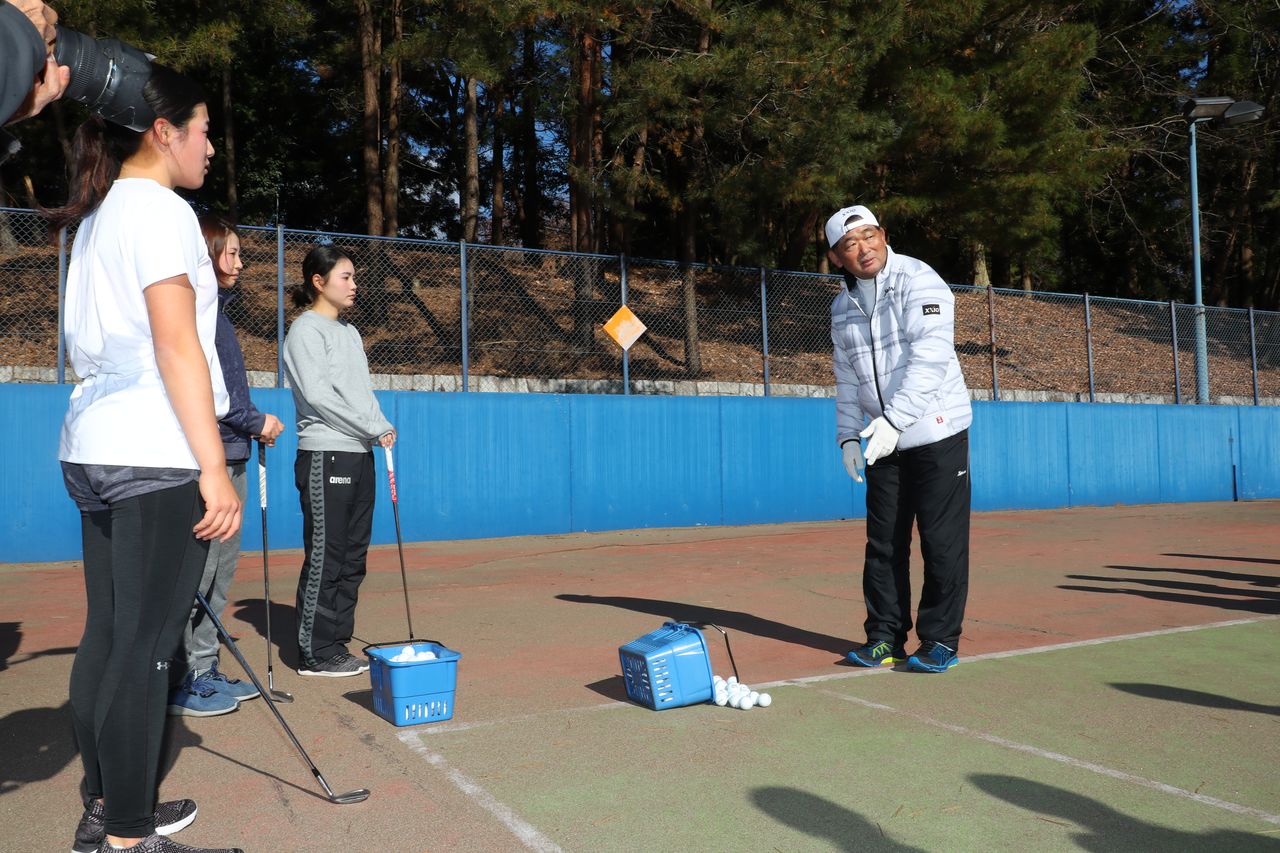 Nakajima instructs a group of students in 2018. At the far left is Yamaguchi Suzuka, who currently plays on the American tour. (© Global Golf Media Group)

Nakajima also emphasizes strength and conditioning. In the past he has brought in Iida Mitsuteru, the trainer of PGA star player Matsuyama Hideki, to demonstrate exercises and offer training tips to young participants. He invited Matsuyama himself to a 2015 camp to show students how a pro playing at the top level of the game stays in shape.

To make the most out of the short training camps, Nakajima works closely with school staff in planning practice menus that will challenge students. He also provides opportunities to learn between camps. Each year when he covers the PGA Masters Tournament in the United States for Japanese television, Nakajima chooses one student to accompany him to the event. While there, the student watches from the gallery as the best players from around the world battle it out for one of the most prestigious prizes in the game. Past participants of this exclusive tour include Kawamoto Riki, who tied with Sugihara Taiga as the lowest scoring amateur at the Japan Open Golf Championship in October 2020.

Many of Nakajima’s graduates have taken their games overseas. Hataoka has three titles to her name since joining the American tour in 2017. An up-and-coming school alumna also playing in the United States is Yamaguchi Suzuka, who turned pro in 2019. Kawamoto Yui, Riki’s older sister, participated in a 2018 training camp and went on to win one event in her 2019 rookie year on the Japanese tour before moving to the US circuit in 2020.

Shibuno’s win at the British Open, the first major title by a female Japanese golfer since legend Higuchi Hisako won the LPGA Championship in 1977, christened a new era in women’s golf. Members of the “golden generation” who have refined their skills under the tutelage of Ozaki and Nakajima are poised to dominate the Japanese tour and have the potential to become top players overseas. Expectations are now building for their male classmates, but for the time being the spotlight remains on Japan’s female golfers.