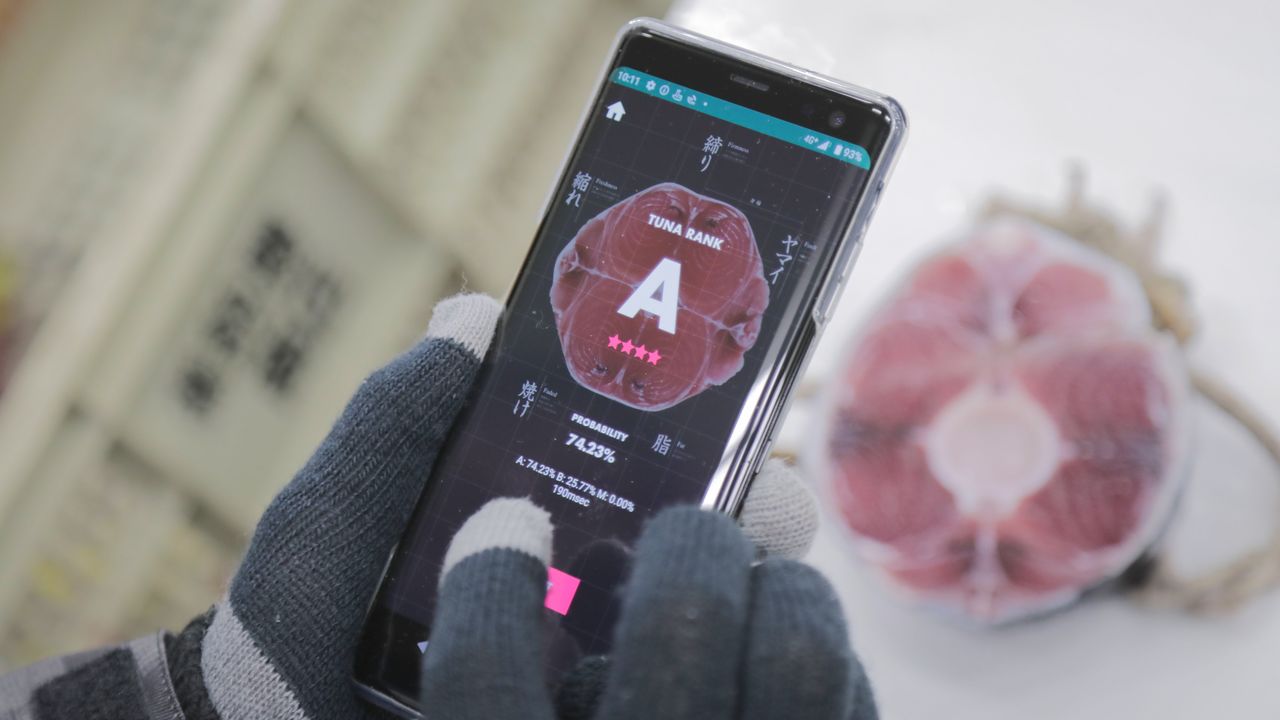 Economy Food and Drink Jan 2, 2021
AI solutions are being rolled out to evaluate tuna quality and to locate rich sanma Pacific saury fishing grounds. With fewer people going into the fishing industry nowadays, technology could lend a helping hand. What do professionals think about the idea?

At the crack of dawn, brokers on the wholesale auction floor at Tokyo’s Toyosu wholesale market carefully inspect the tuna laid out for sale, taking a close look at tail cross-sections and peering inside the fishes’ stomach cavities. Meanwhile, on the open seas, fishers guided by instinct shaped by experience and by their intimate knowledge of weather and sea conditions pilot their vessels in search of fish.

An eye for the finest fish and a nose for fishing grounds are artisanal, purely human skills, but they are increasingly being aided by artificial intelligence. Such skills have depended so much on experience and instinct that many are skeptical whether AI can make inroads. But thanks to technological advances and convenience, even fisheries business professionals are starting to take a closer look at these aids. 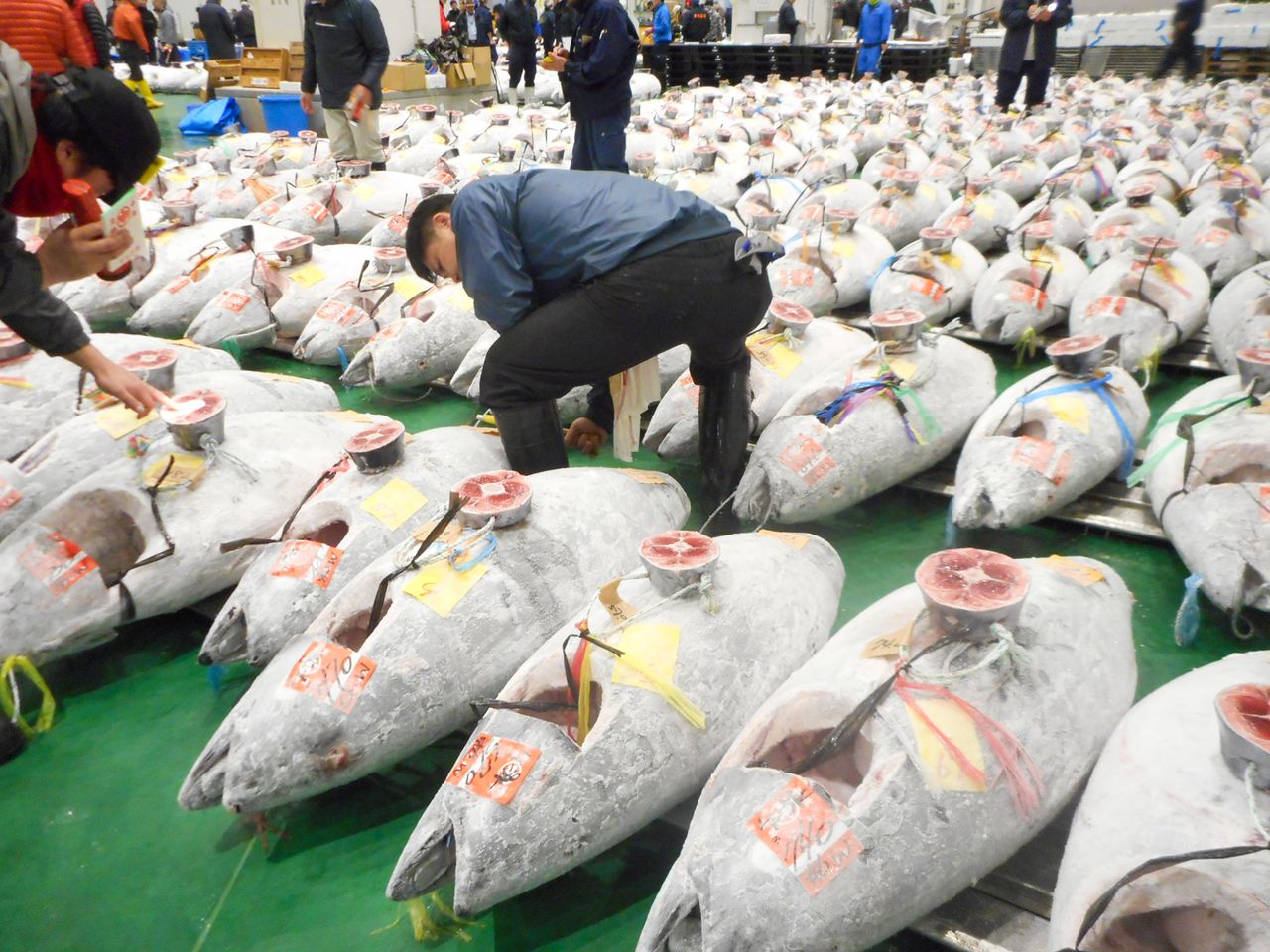 Oyamada Kazuhito, president of Sugibun, an intermediate wholesaler in the tuna business for 50 years, explains how difficult it is to pick out the best tuna. “Even if you’ve been doing it for half a century, there’s still so much to learn. The fatty red meat of the best tuna has great umami, and the flesh, which should be firm and smooth, tastes faintly sweet. Even if the tail cross-section looks dull, cutting away the topmost layer sometimes reveals bright red flesh inside. With frozen tuna, it’s hard to judge the smooth feel of the flesh until you work it for 3 to 5 minutes, and you can’t tell how easily the flesh will discolor until several hours after the tail cross-section has been cut. With tuna, it’s a gamble every time, so I don’t see how AI can do something that human beings can’t.” 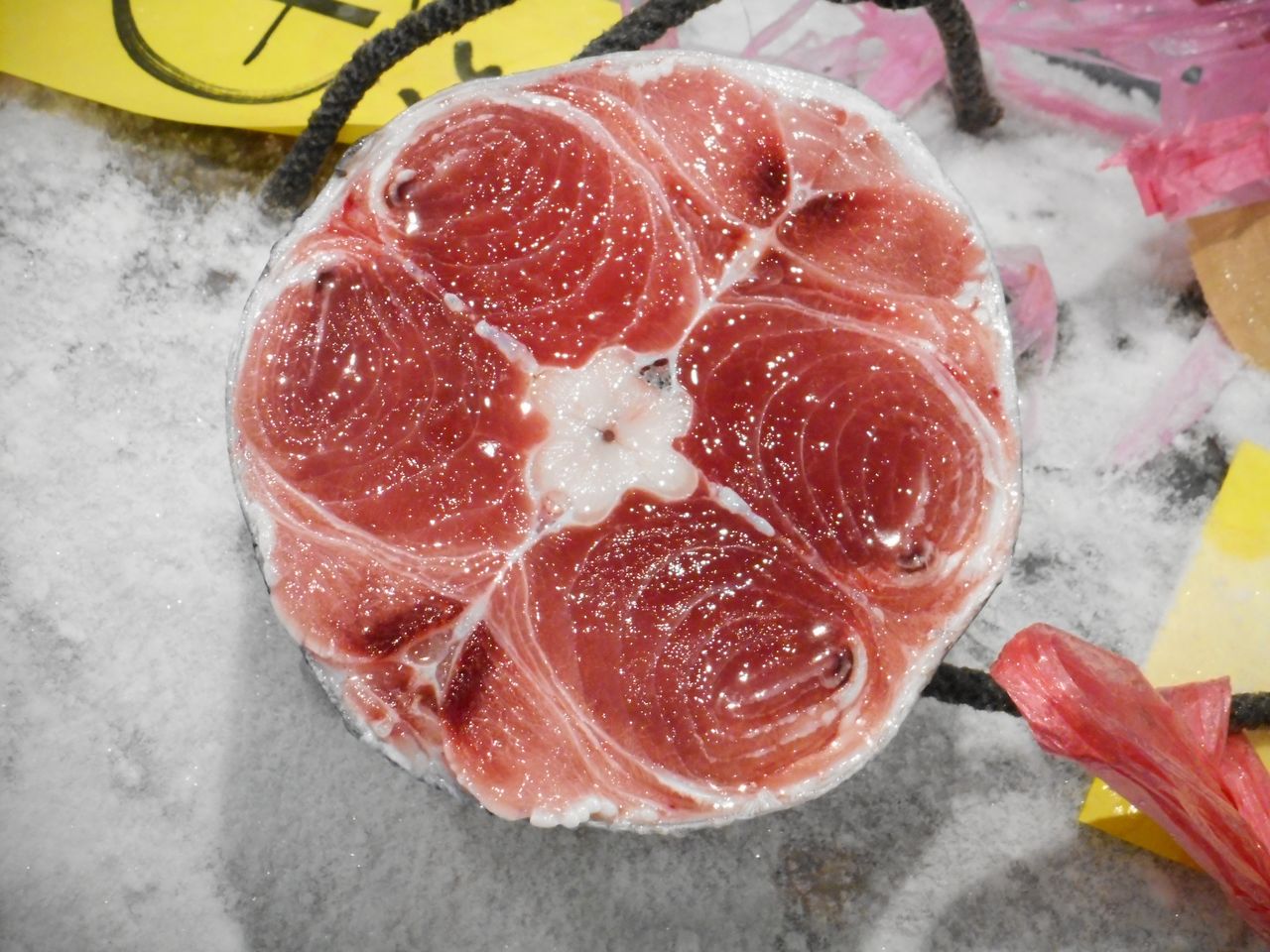 Most Toyosu brokers believe that developing an eye for spotting good tuna is a skill that can only be acquired through experience—and one that can’t be taught. Some even say that they put all five senses to use when selecting tuna, but many other factors in addition to size and flesh quality come into play. For example, brokers need to know whether the fish was wild or farmed and if it was caught in waters near Japan and delivered fresh to the market or frozen for shipment after being caught far from home. The season, location of the catch, and fishing method—whether pole and line, longline, in a set net, or a round haul net—also affect their buying and selling decisions.

At the first auction of the new year, bluefin tuna caught off Ōma, in the Tsugaru Strait between Honshū and Hokkaidō, can fetch hundreds of millions of yen for a top specimen, but even average fish sell for several million yen each. Given such prices, brokers need to carefully evaluate what they are buying.

A Foolproof Tool for Tuna?

When it is so difficult for professionals to properly evaluate quality, it is not surprising that many consumers end up disappointed even after carefully checking out the tuna on offer at their local fish shop. That negative experience spurred development of an AI app, called Tuna Scope, for evaluating tuna.

Dentsū creative director Shimura Kazuhiro has been a tuna lover since childhood. He says, “Tuna is something you buy for a festive occasion, expecting a real treat, but even if you always buy from the same shop, it may disappoint.” After watching a television program showing brokers evaluating tuna at the former Tsukiji fish market by looking at tail cross-sections, Shimura decided that AI had a role to play and set up a project to develop an app.

Working with Dentsū and other partners, after much trial and error Shimura succeeded in developing and commercializing the Tuna Scope app. Simply taking a snapshot of a tuna tail cross-section can yield information about that particular sample’s freshness and fattiness. 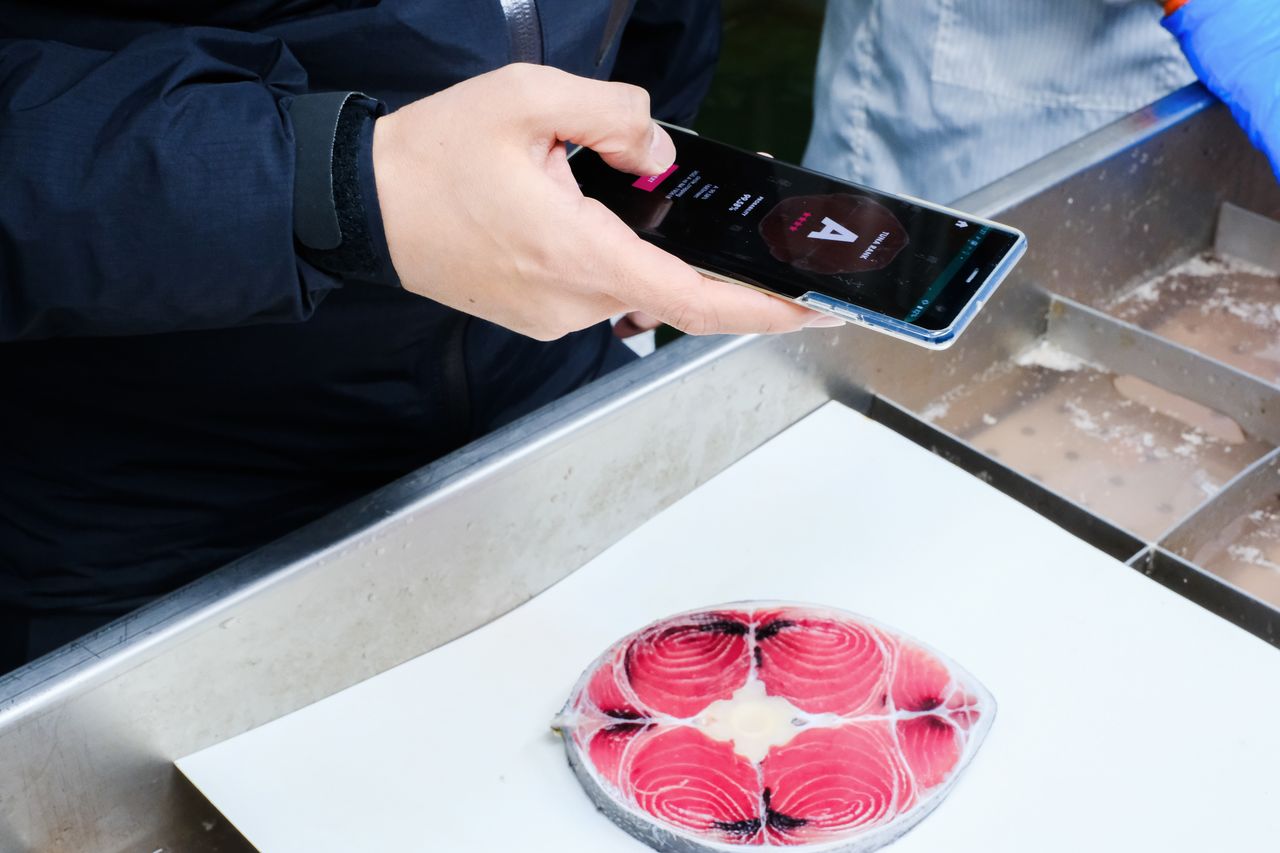 The Tuna Scope app allows buyers to evaluate quality instantly simply by holding a smartphone over the tail cross-section. (Photo courtesy of Dentsū)

According to Dentsū, photos of frozen yellowfin tuna tail cross-sections and experienced graders’ evaluations were entered into a database and AI deep learning was put to work absorbing the database to enable instant grading. Since even inexperienced workers can now grade the fish on three to five different levels simply by holding a smartphone over a tail cross-section, the app is increasingly being adopted in processing facilities. And today, conveyor-belt sushi chains like Kura Sushi are now serving premium-grade tuna rated using Tuna Scope.

In July, Kura Sushi added AI-graded tuna to its menu. The item, called “Premium Matured Tuna,” which sold for ¥200 plus tax per plate, was a hit with customers during the chain’s summer and fall sales campaign. 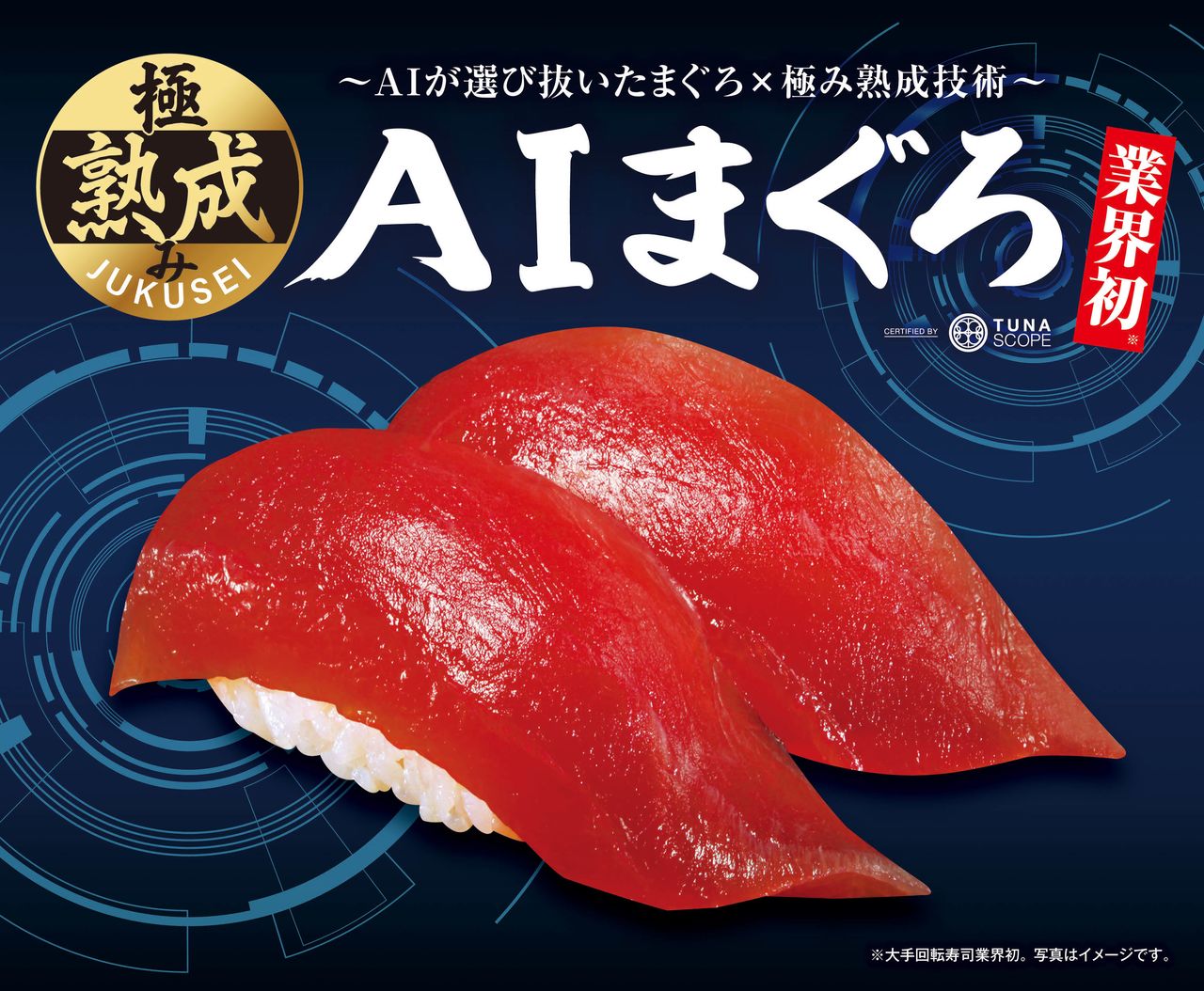 The AI-graded tuna sushi was available at Kura Sushi in summer and fall 2020. (Photo courtesy of Kura Sushi)

With an eye on using the app outside of Japan, Tuna Scope’s Shimura hopes to upgrade its capabilities to allow grading of Pacific bluefin and bigeye tuna. Many fishing operators around the world make their money on large catches, but Shimura hopes to contribute to sustainability by using Tuna Scope to establish global quality standards for tuna that would lessen the need for huge hauls.

It’s unlikely that ordinary consumers will use Tuna Scope to rate tuna themselves. But if supermarkets come to carry “AI certified” tuna, it could take the guesswork out of trying to select the tastiest cuts. The day may come when shoppers will rely on artificial intelligence to always enjoy the best-tasting tuna.

AI Helps in the Search for Fish

AI has also begun making inroads in saury fishing. In response to poor saury catches in the past few years, the Japan Fisheries Information Service Center has successfully developed an AI-aided fish finder, a service inaugurated this season, that alerts fishers to schools of saury by showing their location on maritime maps.

Saury prefer relatively cold waters, and until now, based on knowledge and experience, lead vessels have guided their fleets to promising fishing grounds by examining seawater temperature data. The Ebisu-kun system, which transmits detailed hydrographic and weather data online, is a valuable aid to fishers, and most large vessels use it.

An additional Ebisu-kun service for predicting fishing grounds uses seawater temperature data from the past 15 years and information provided from fishers to provide input on characteristics of yearly changes to saury school formations, the amount of available resources, and seasonal changes to fishing ground locations. Service Center officials say that recent poor catches, fewer vessels catching saury, and fewer fishing sorties mean that that such information is less plentiful nowadays, and hopes are high that Ebisu-kun can compensate for this. 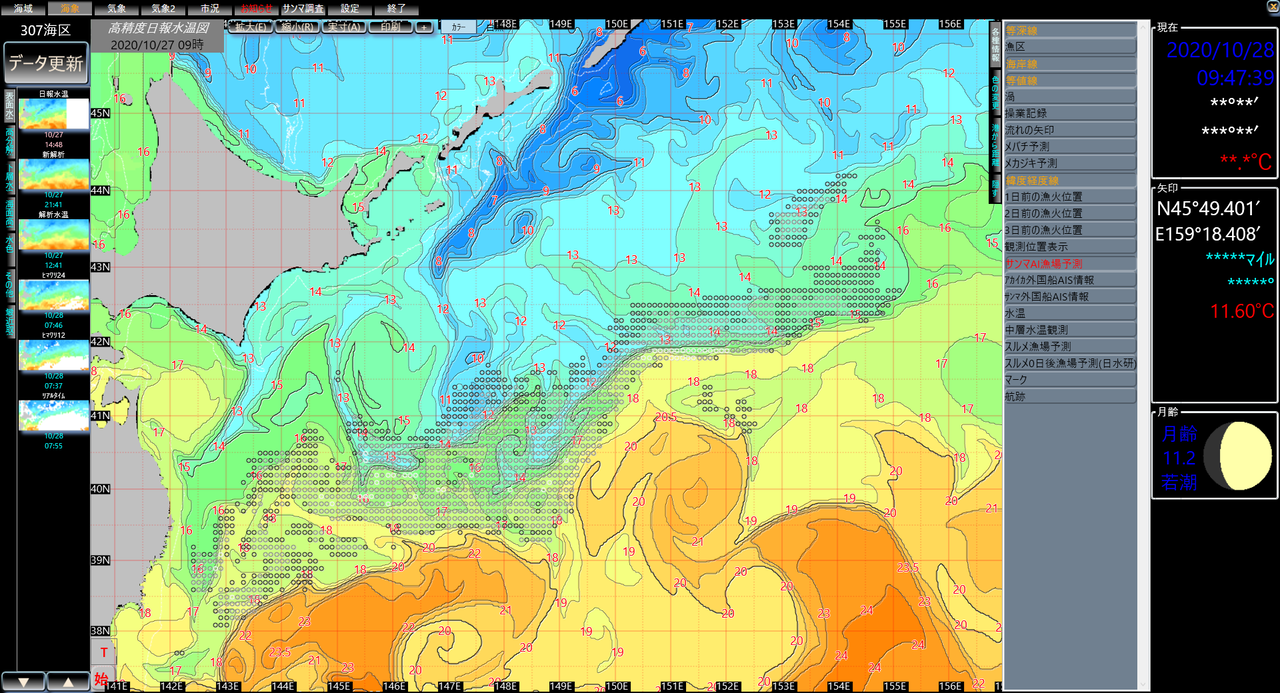 Fisheries officials say that whereas conventional fish finders aboard trawlers can only detect fish immediately around the ships, AI-enabled fish finders, which cover a much wider area, are very helpful. They hope Ebisu-kun will prove its worth as the saury season nears its end without much improvement in catch volume, so that they can finish the year in reasonable shape.

Some believe that effective searches for fishing grounds aided by AI will only hasten the depletion of marine resources. But a fisheries research institute estimates are that only 20% to 30% of saury present in the northern Pacific are being caught right now, including by non-Japanese ships. The Service Center hopes that using AI will not only help speed up locating rich fishing grounds but also contribute to fisheries research and effective measures for managing marine resources.