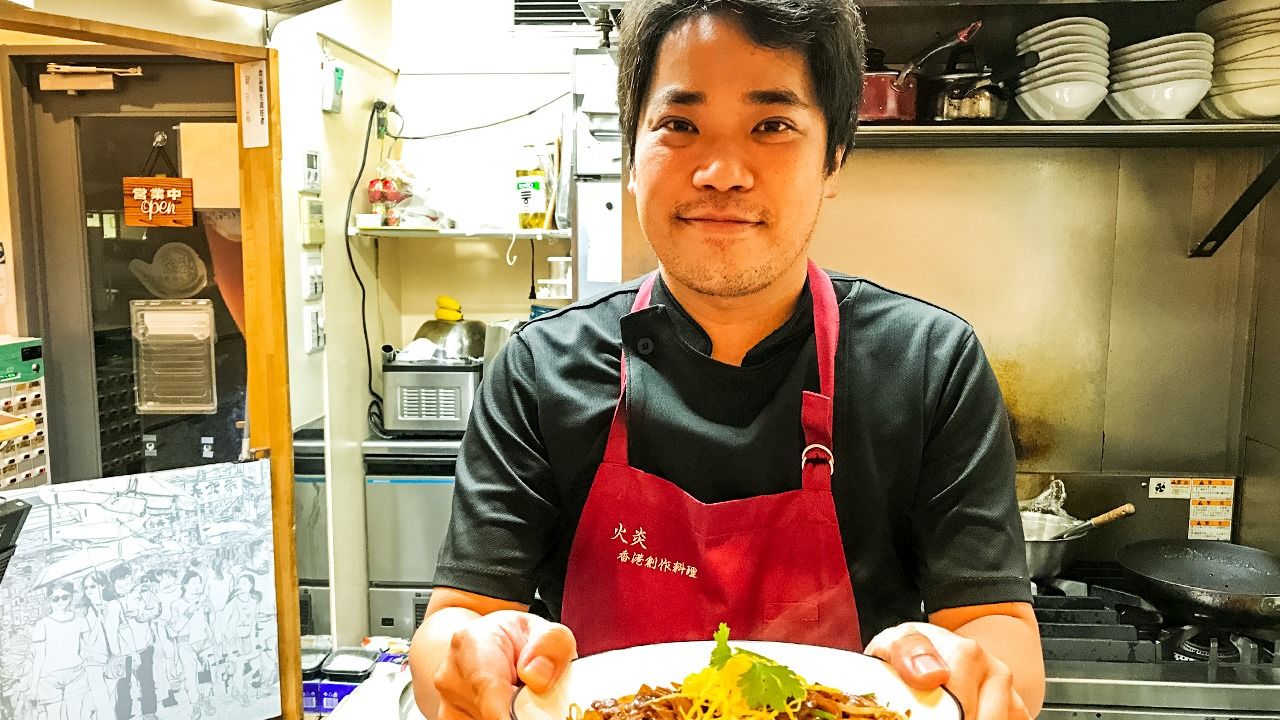 Kaen: A Taste of Hong Kong in the Heart of Asakusa

Food and Drink Society Jan 3, 2021
Hong Kong-born chef and owner of restaurant Kaen near Asakuka’s iconic Kaminarimon serves up authentic Hong Kong cuisine that is worlds apart from what is typically found in Japan.

A Rare Foreign Restaurant for Asakusa

“One order of stir fried rice noodles with beef and one order of black truffle pork dumplings. Coming right up!”

Tang Yat Shing, the 36-year-old owner and chef of Hong Kong restaurant Kaen, receives every order in this same cheerful manner. Seating only 10, Kaen is small, but always seems to be busy, especially during the lunch and dinner rushes when customers can wait 20 minutes or more to be served. In a bustling metropolis like Tokyo, where speed is king, it is risky business to keep hungry patrons hanging on for so long. A little wait is inevitable, though, as Tang is the sole staff, looking after everything from serving to cooking to cleaning up. Few mind the slow service; what brings them is authenticity second to none. Since Tang opened Kaen in the neighborhood of Asakusa in September 2018, it has been a gathering spot for Tokyo’s Hongkongers, who come to savor the tastes of home.

Tang knew there were risks to opening his shop in Asakusa, a mecca of traditional Japanese culture. The neighborhood is the site of the Buddhist temple Sensōji with its sprawling shopping arcade and iconic vermilion gate, the Kaminarimon, that draws crowds of tourists from around the globe. Most visitors look to dine on Japanese fare like shabu shabu, grilled eel, and tempura heaped over bowls of rice rather than foreign food, much less the niche flavor of Hong Kong cuisine.

The two years since Tang opened the shop have been rocky at times. “The month after opening wasn’t bad, but things got tough after that,” Tang recounts with a laugh. “There were spans when I didn’t even get ten customers in a week.” Unphased by the slow start, he was certain that word of the restaurant would eventually get around.

The shop scraped through its first year and a half, but as its reputation grew, so did its customer base. Then the novel coronavirus struck. Kaen saw its hard-earned momentum dissipate as regular patrons stayed away when the government declared a state of emergency in April 2020. Business only began to trickle back once the declaration was lifted more than a month later. 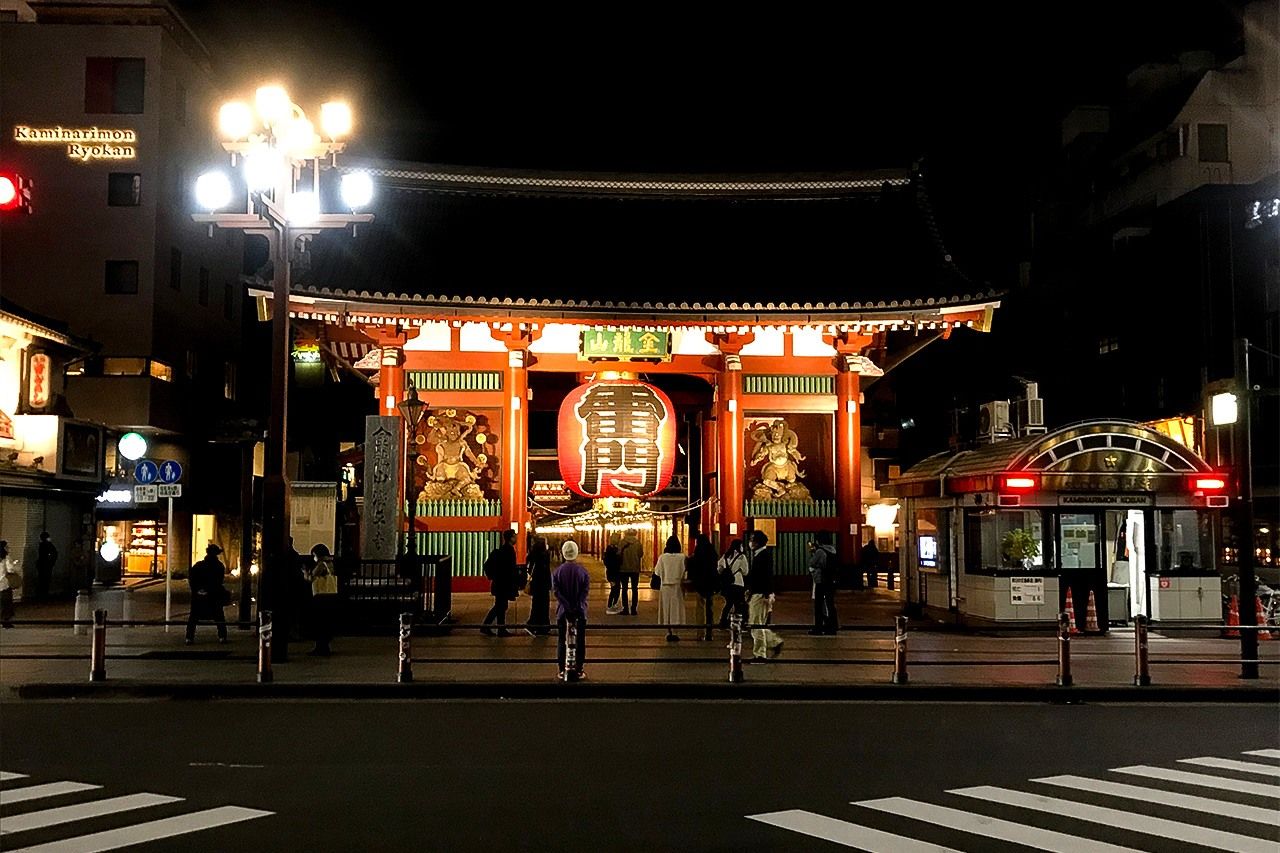 The Kaminarimon is one of Asakusa best-known landmarks.

Tang has lived in Japan for a better part of a decade, having first came to study confectioner at culinary school in Tokyo. Homesickness set in soon after arrival, and to alleviate his blues he scoured the metropolis for restaurants serving up Hong Kong cuisine. To his disappointment, few shops offered the authenticity he longed for. So he took matters into his own hands, turning to YouTube to learn how to make Hong Kong cuisine at home. His ambitions grew from there.

Tang combines his love of his native cuisine with his experience at culinary school in running Kaen. Everything is hand-made, even the rice noodles in the shop’s flagship dish, . The time and cost involved is significant for this dish and Tang can only offer 10 servings a week . He also wraps each of the popular pork dumplings by hand every morning, but limits the quantity to what he thinks he can sell in a day. 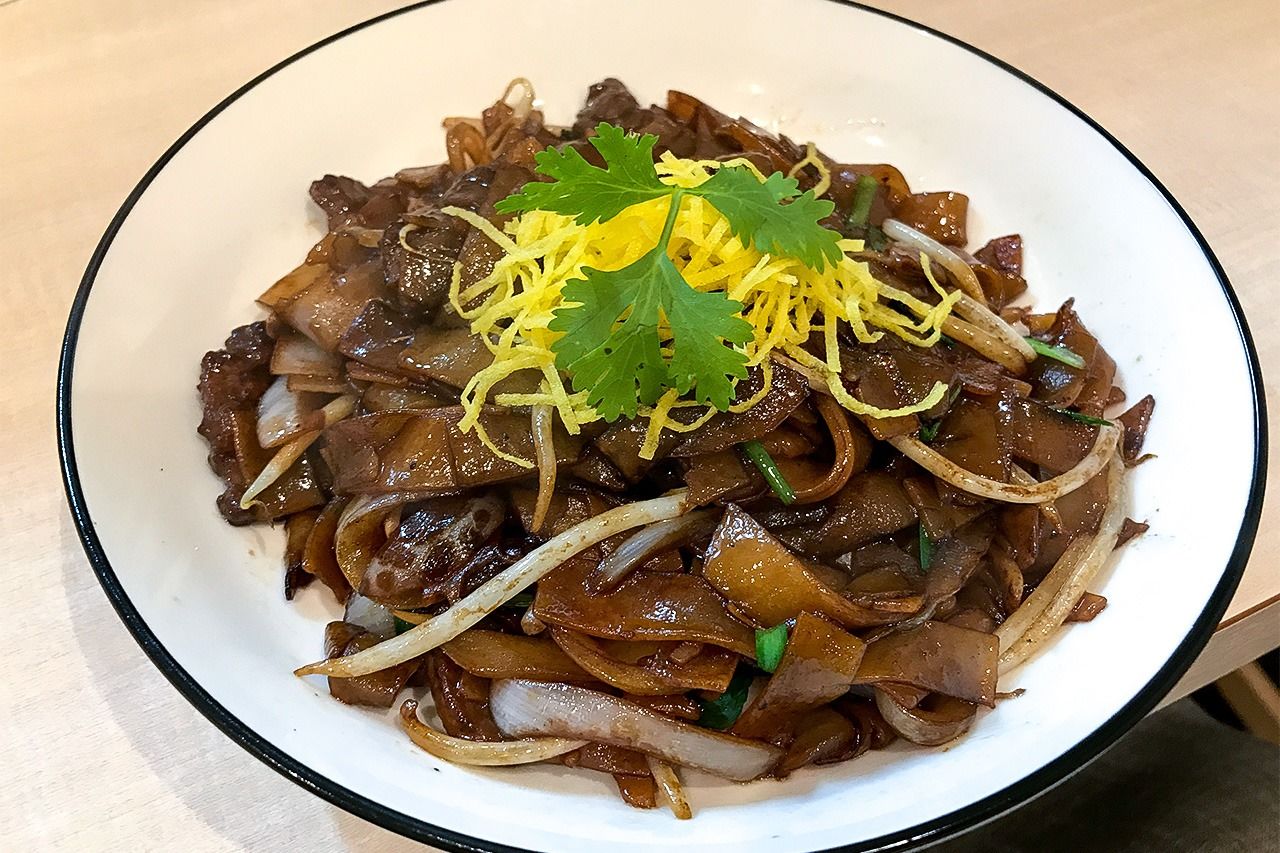 Tang’s ambitions are modest. Rather than bringing his native cuisine to the world, he says he just wants to serve people who know what good Hong Kong food tastes like, no matter where they are from. Most of his Japanese customers have traveled to or worked in the city before, but for some Kaen is their first taste of Hong Kong. Tang is a patient teacher. Grinning, he says that “occasionally I get people who think Hong Kong is in Taiwan.” He also notes a tendency of Japanese to see Hong Kong cuisine as basically the same as all Cantonese cooking. The difference, he explains, is that Hong Kong is a cultural melting pot. “A lot of Western cuisine was brought in during British rule, producing a culinary tradition that fused Western and Eastern food.”

There are numerous dishes that have been influenced by cuisine from places like Britain and India. The most obvious example is barbecued pork pie, a mouthwatering treat featuring crisp pie crust filled with Cantonese barbecued pork. A meal at Kaen is not only satisfying, but also provides insight into the Hong Kong’s own multicultural history. 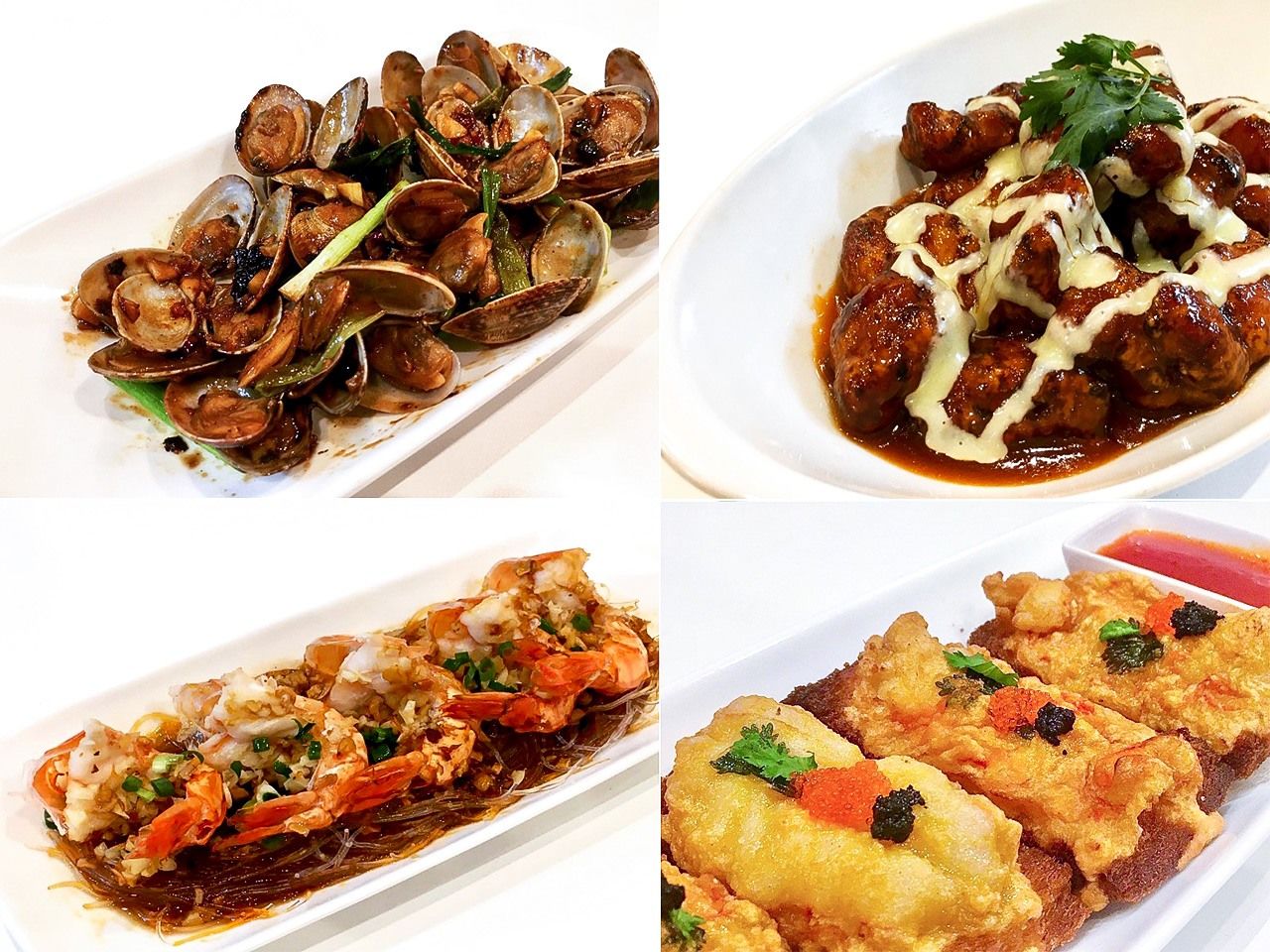 The question arises as to why Tang chose to open his shop in Asakusa rather than somewhere like Ikebukuro or Shinjuku that boast an array of Chinese restaurants and other eateries.

Opening a shop in Japan is always a challenge for foreigners. The task that was made even more difficult by the fact that Tang had no personal connections at all in the country. He turned to a Japanese broker for assistance in looking for a property, but many landlords baulked at renting to a non-Japanese citizen and even threw up roadblocks as deterrents. In one instance, Tang was just about to sign the contract on a reasonably priced shop facing a major thoroughfare when the owner inexplicably raised the rent at the last minute. Unable to afford the ¥1 million monthly cost, Tang had to continue searching.

Tang’s enthusiasm eventually won over the broker, who put in extra effort in trying to sway owners. The pair finally stumbled on a long-established restaurant in Asakusa that was preparing to close. Set in a quiet residential neighborhood, the location was not ideal. But the rent was reasonable, which sealed the deal for Tang. In naming the restaurant, he chose two characters that mean “fire,” which in the traditional Chinese art of divination have an auspicious ring while also evoking the fighting spirit he brings to the shop.

He admits that at the beginning his neighbors viewed him with suspicion. “One time I saw another shop owner smoking and chatting outside with customers, and I could hear them badmouthing my soup dumplings.” As disheartening as this was, Tang remained upbeat. “It was obvious the guy had never been to the shop,” he recounts with a chuckle. “If he had, he would’ve known that I don’t even serve soup dumplings here.”

Over the last two years, Tang has earned the trust and respect of the locals and fellow shop owners in the area. There is a tradition of mutual aid in Hong Kong’s close-packed neighborhoods, where people come together to help deal with problems when they arise. Tang hopes to foster that same closeness in his adopted community. 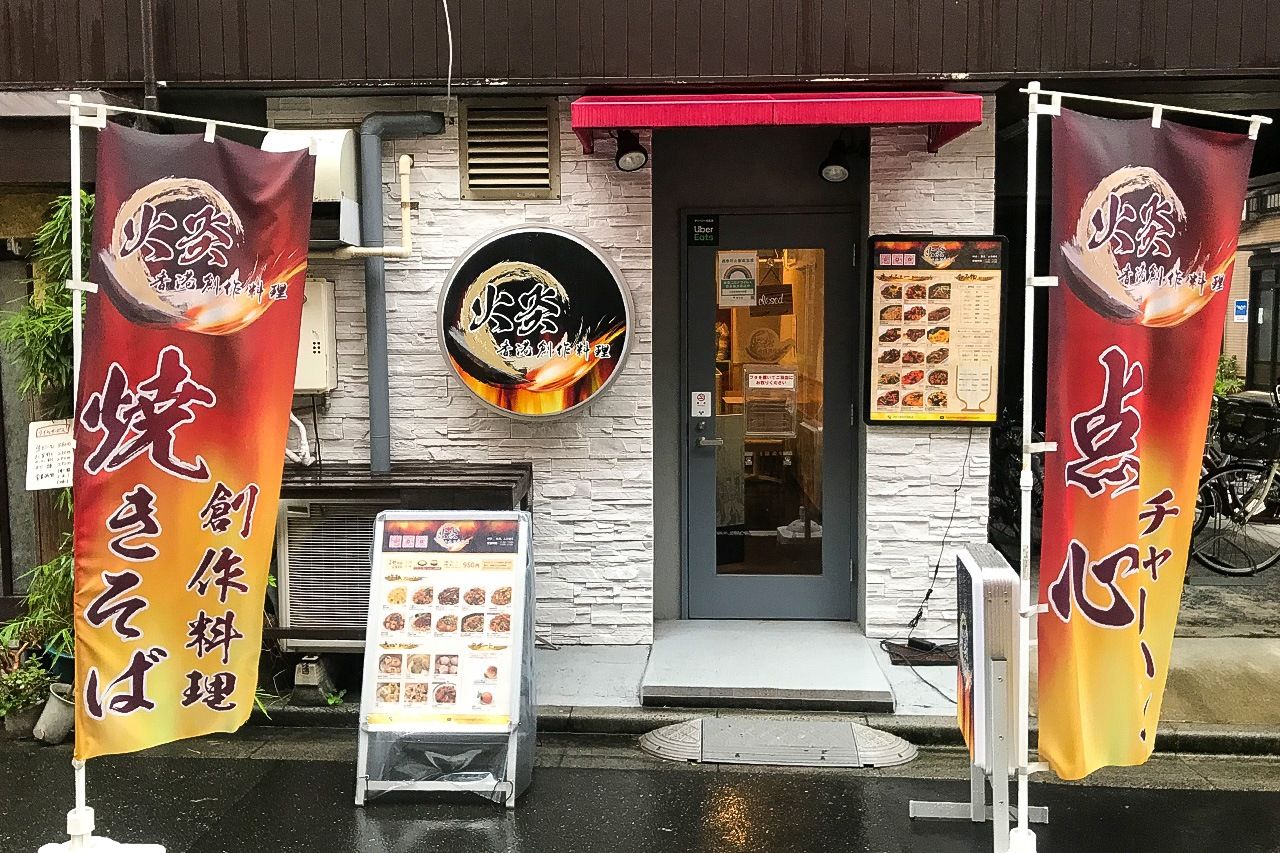 Kaen sits in a quiet Asakusa residential neighborhood. The location was once a Western-style restaurant.

Starting Out at A Famous Hong Kong Cafe

Although Tang came to Japan with zero cooking experience, his family runs the famous cafe Australia Dairy Company in Hong Kong’s Jordan area. The shop is an example of Hong Kong’s cha chaan teng style restaurants, which fuse Chinese tea cafe tradition with Western dining. Established in 1970, it is one of the city’s oldest cafes. in the restaurant, and having grown up in Jordan, Tang spent time working with the staff and helping out at the register.

The shop once had a reputation on the Internet for its rude staff, something that Tang explains away. “It’s not that the staff are rude, per se. But the job pressure is enormous. Hong Kong is all about making a quick profit, and so staff just focus on speed and efficiency.” Rapid-fire service is a must, and staff who fail to keep up a good pace get scolded. Out of necessity, workers talk fast and loudly, which comes across as rude.

Tang notes that the rough image of cha chaan teng shops has led to rumors of ties to organized crime, something he resolutely refutes. “The owners are just regular people. They go home after work and spend time with their families and go to the beach on their days off. Just like anyone else.”

I asked Tang if he had any intention of bringing Hong Kong’s cha chaan teng culture to Japan. He replied  that it might be hard to carve out a niche for East-West fusion dishes like macaroni soup or Hong Kong French toast in Japan’s firmly established food culture.

Tang does not claim to be trying to spread Hong Kong’s culture with his opening of Kaen, though. He attributes the success of the restaurant to winning over Japanese fans to his melding traditional Hong Kong cuisine with original, creative cooking.

Since the restaurant opened, Tang has been too busy to return to Hong Kong for a visit. He considered going back in 2019, but his family recommended he put it off when demonstrations sparked by the passing of the 2019 Hong Kong Extradition Bill started to intensify. With the COVID-19 pandemic dominating 2020, he has decided to put off travel to Hong Kong for the time being. However, Tang is not pessimistic. He intends to continue offering the Hong Kong cuisine that he loves and learn more recipes to bring even more authentic Hong Kong flavor to Japan. 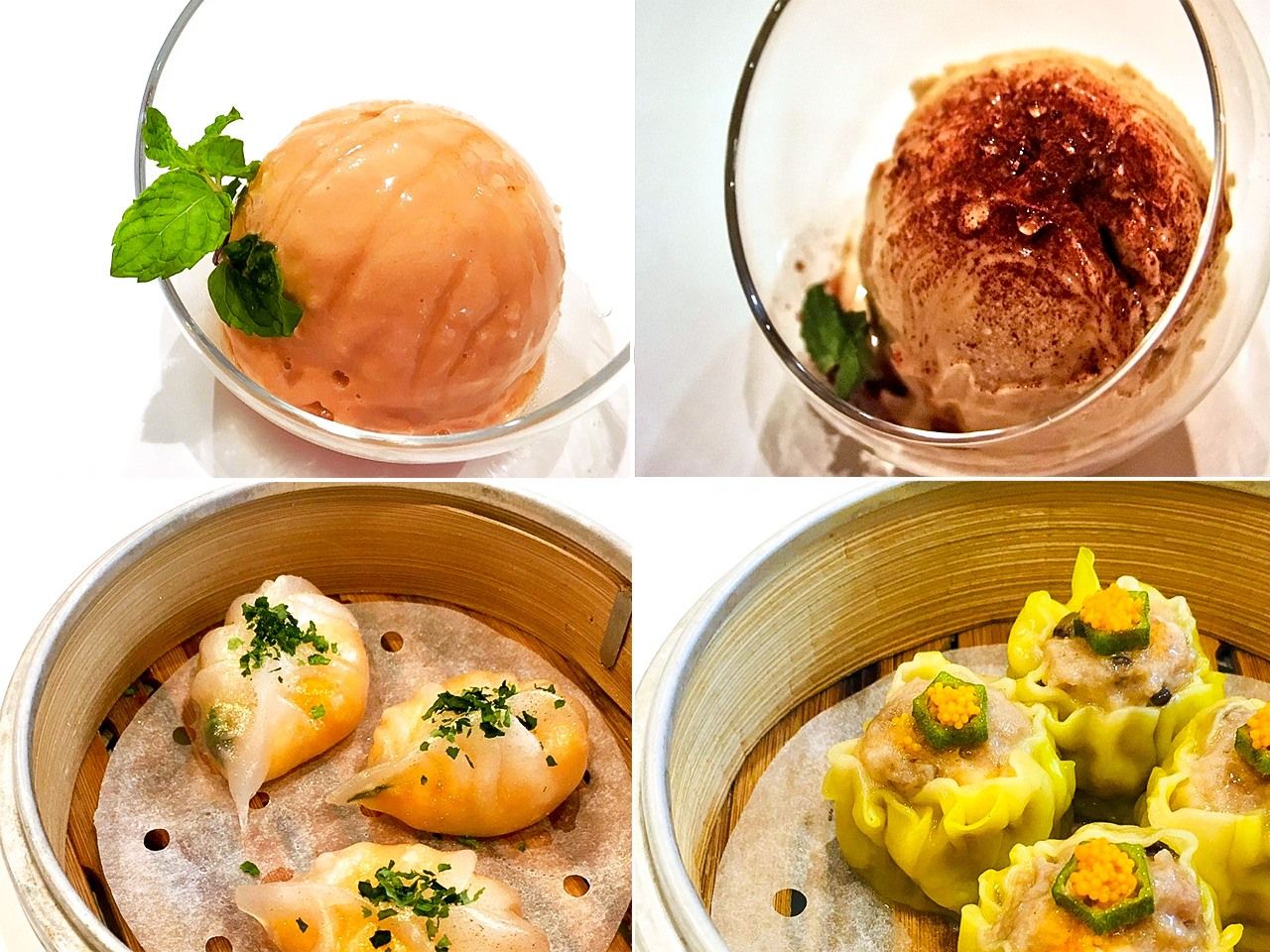 More menu items from Kaen, all of which Tang makes by hand.