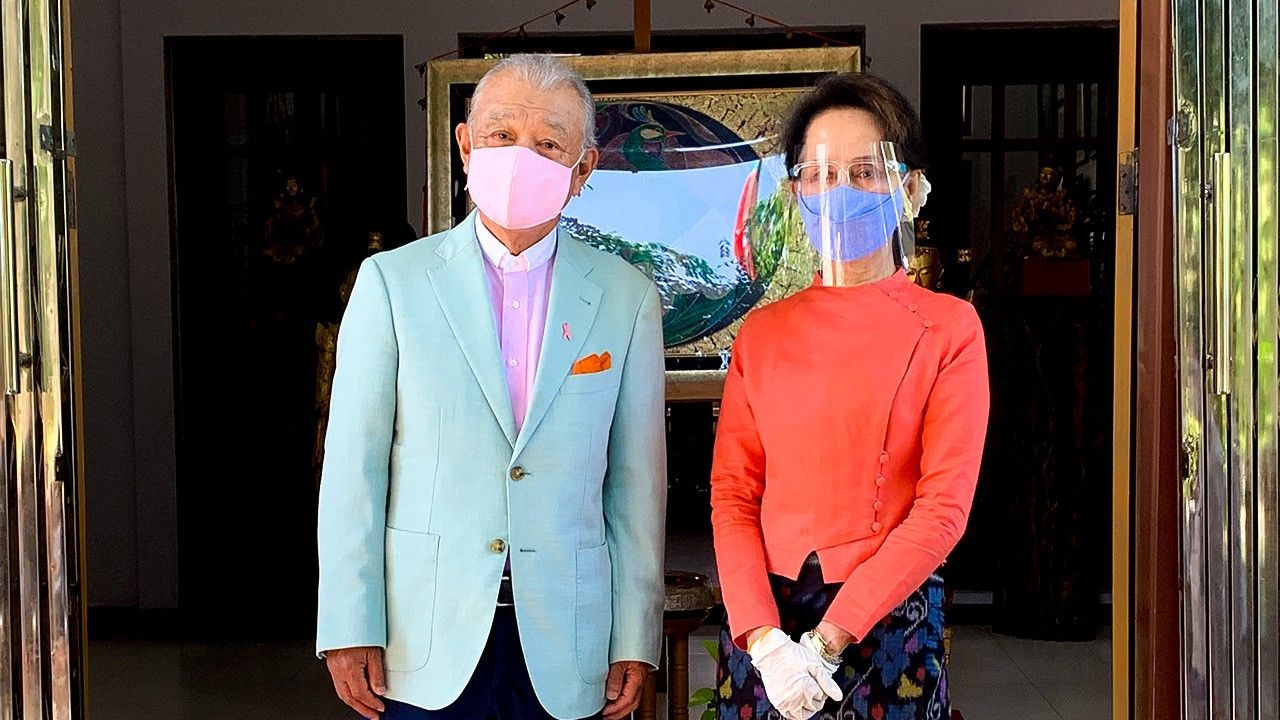 Politics World Nov 26, 2020
Myanmar’s general election took place on November 8, 2020. We spoke with Sasakawa Yōhei, who headed a Japanese election observation team in his role as Japan’s envoy for national reconciliation in Myanmar, about his meeting with the country’s leader, Aung San Suu Kyi, and the prospects for peace among its minority groups.

The NLD Comes Out on Top

In the general election held in Myanmar on November 8, the ruling National League for Democracy won 396 of the contested seats in both chambers of the country’s parliament, a victory rate of more than 80% and an improvement on the 390 seats it took in the last elections—the first held in a quarter-century—in 2015. Voter turnout was high at more than 70% nationwide.

The rules governing Myanmar’s elections, held every five years, prevent competing parties from directly criticizing their opponents during campaigning. This leads to an almost complete lack of meaningful policy debate, and indeed, the 2020 election became largely a popular vote of confidence in Aung San Suu Kyi, head of the NLD and, as state counsellor, effectively the country’s leader alongside the country’s powerful military.

Prior to the voting many observers predicted that the NLD would lose seats due to dissatisfaction with the last five years of stagnant negotiations to settle civil conflict in the nation and sluggish economic growth. The results, however, signal reconfirmed public confidence in Suu Kyi’s leadership, alongside expectations for continued democratization in Myanmar. The military-affiliated Union Solidarity and Development Party and a number of parties representing minority ethnic groups failed to make gains. Even when these opposition seats are combined with the 25% of parliamentary chairs allotted to the military, they fall far short of the NLD’s majority in both houses, a sign that the latter party should enjoy a stable foundation for its administration over the next five years. 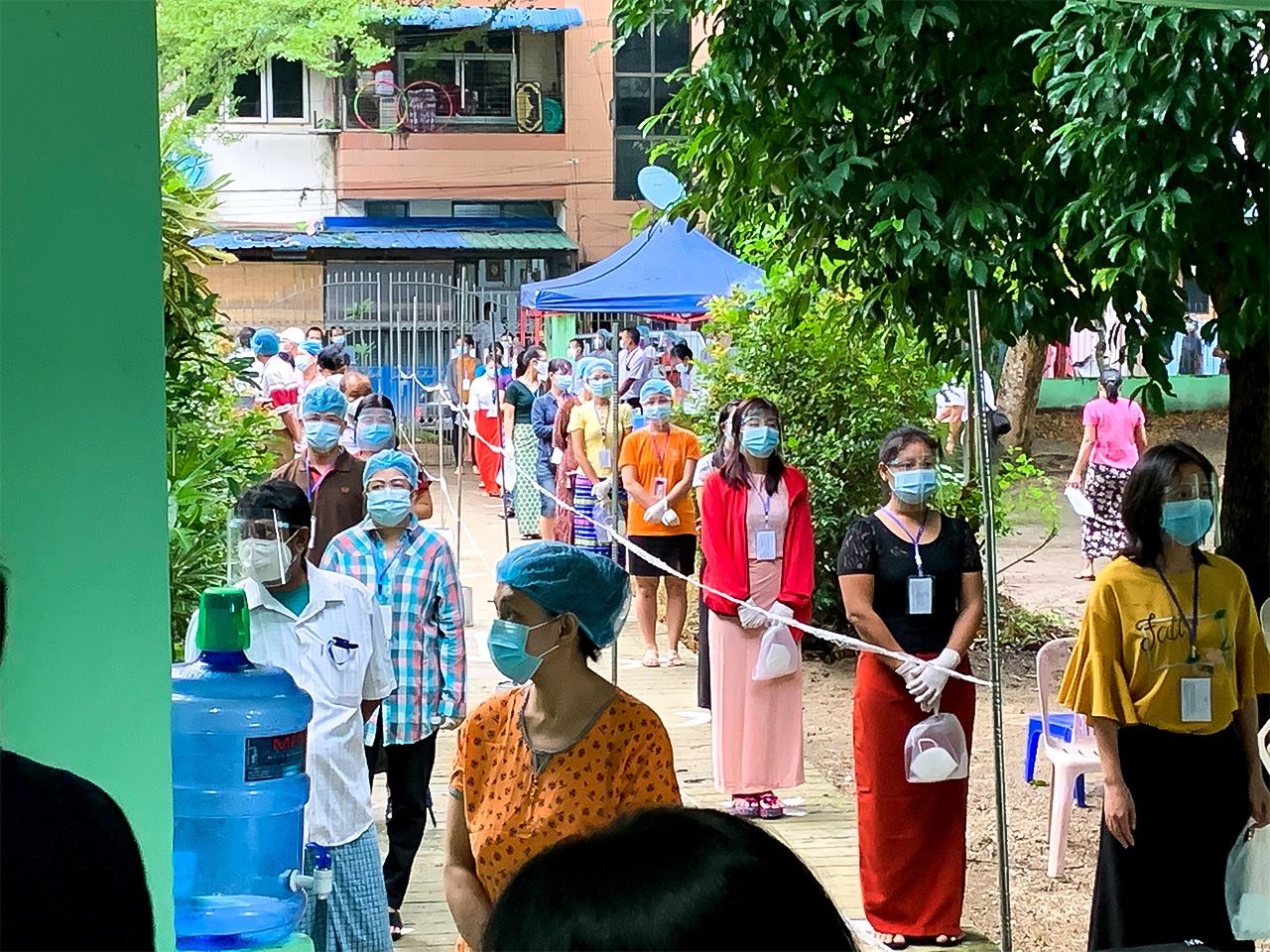 Voters maintain distance while waiting to cast their ballots as part of COVID-19 prevention measures. (Courtesy of the Nippon Foundation) 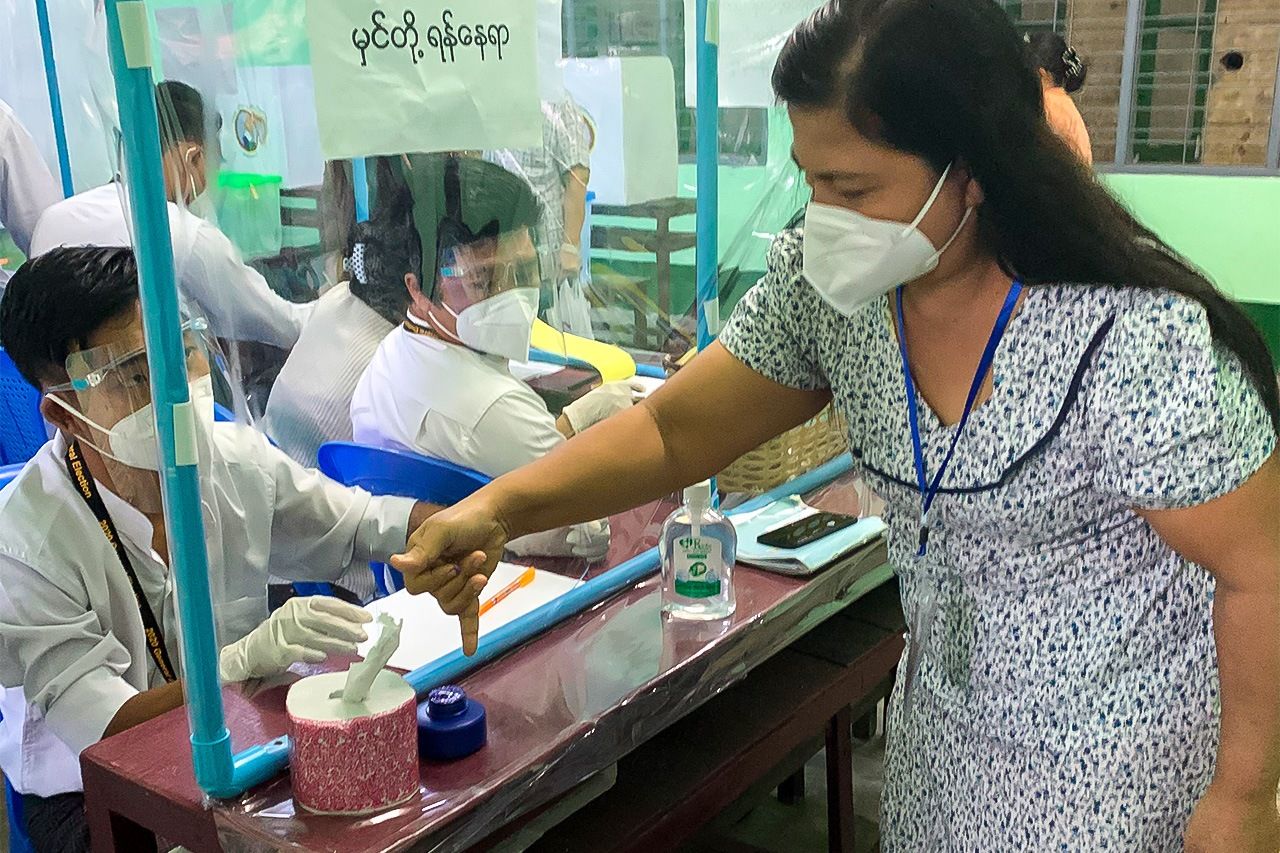 A voter dips her finger in indelible ink to show that she has cast her ballot, a way to prevent double-voting. (Courtesy of the Nippon Foundation)

On November 10, Suu Kyi met in the capital, Naypyitaw, with Sasakawa Yōhei, special envoy of the Japanese government for national reconciliation in Myanmar and chair of the Nippon Foundation. “The state counsellor is taking a level-headed view of her party’s victory in the election,” Sasakawa recounted in a November 16 interview with Nippon.com.

During its last five years in power, the NLD has shown a halfhearted approach to negotiations on reconciliation with the country’s minority groups. “In Rakhine State on the country’s western coast,” explained Sasakawa, “an armed ethnic group called the the Arakan Army is seeking to carve out an independent territory. This is a perilous situation, given the possibility that it will touch off similar movements among other ethnic groups in Myanmar. Major General Aung San, Suu Kyi’s father, hoped to see peace among all groups in the nation, but his dream is now in danger of spinning into a complex, fractured condition. Our hope is that the Myanmar government will make national reconciliation its key theme over the next five years.”

“I helped to convince the nation’s army to end hostilities unilaterally, in a ceasefire that has gone on for eleven months now,” said Sasakawa. “It’s most unfortunate that this period saw no progress in talks on a more lasting peace between the two sides. I hope that the government and military will share information going forward, and that we’ll see some expedited dialogue as soon as possible.” After expressing this hope for further work toward peace, he said, Suu Kyi agreed to make these efforts. An announcement from the Myanmar government, meanwhile, notes that Suu Kyi told Sasakawa that she would make vigorous efforts to drive the peace process forward.

The Rohingya situation continues to attract the most international attention in Myanmar. Conflict involving this largely Muslim ethnic minority in the west of the country, particularly in Rakhine, has destabilized the area and increased fears that the Arakan Army, composed of extremists from among the Arakanese peoples in Rakhine and nearby states, will grow as a threat to national stability. Following troubles including the abduction of an NLD candidate, voting was canceled in some parts of Rakhine.

On November 6, two days before the election, Sasakawa also met with Senior General Min Aung Hlaing, commander in chief of the Myanmar Armed Forces. The two shared their views on the Rakhine situation. 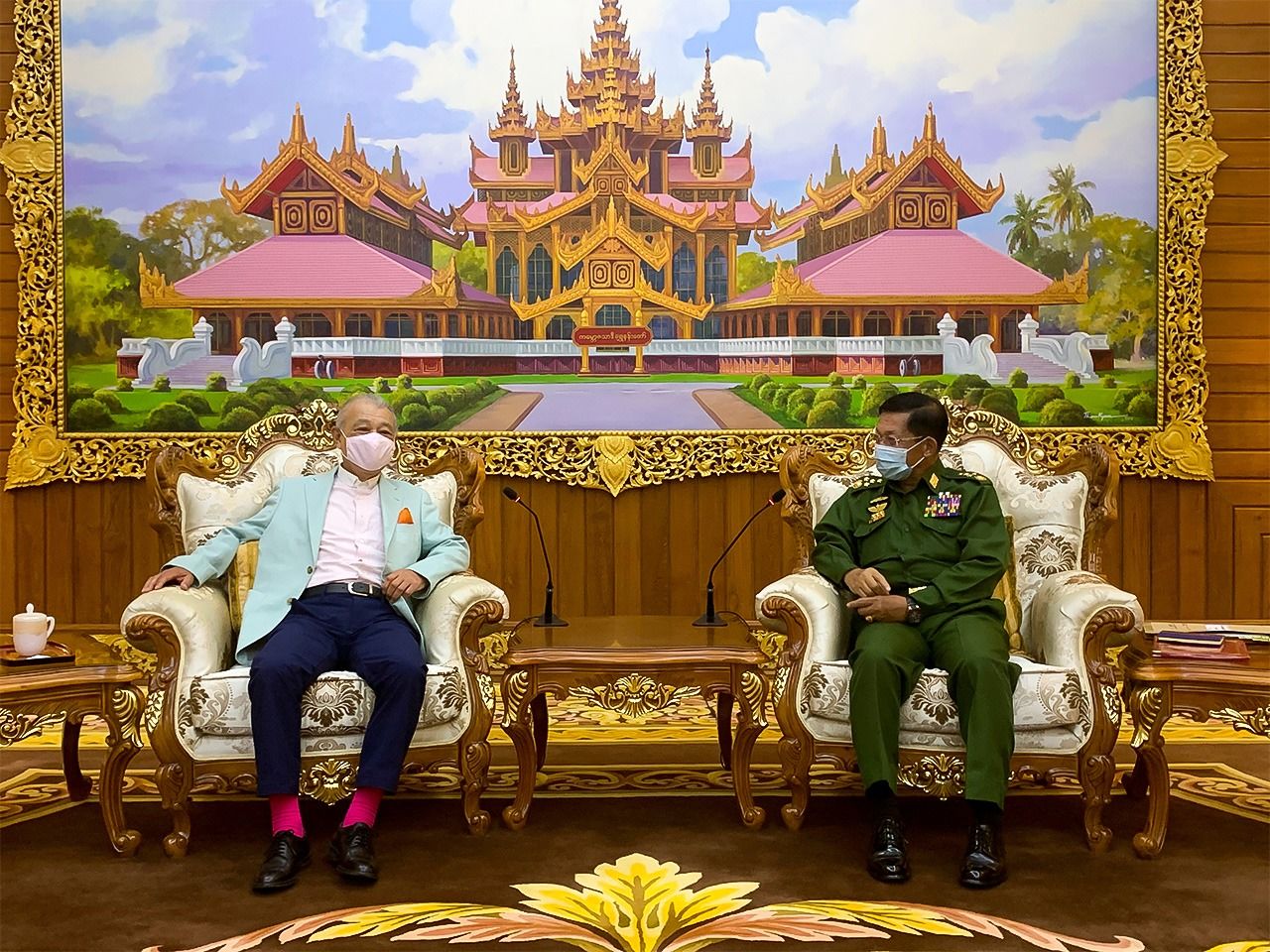 Senior General Min Aung Hlaing, at right, meets with Sasakawa Yōhei ahead of the election. (Courtesy of the Nippon Foundation)

Japan a Rival to China in the Myanmar Arena

As part of its Belt and Road Initiative, China is seeking new routes to ship resources from the Indian Ocean to its interior. One of these is an oil pipeline, now under construction, that terminates at the port of Kyaukpyu in Rakhine. At a time when Western corporations are hesitant to move into an area whose stability is threatened by the Rohingya issue and the rise of the Arakan Army, China is moving to expand its influence in the area through projects like this pipeline and an additional plan to build a rail link between China and Myanmar.

As things stand now, Japan is the only potential rival to China in terms of its influence on Myanmar. As Sasakawa explained, “Suu Kyi has considerable expectations of Japan. Tokyo has already forgiven 500 billion yen in development loans to Myanmar, and next year the Japanese government is planning to extend economic assistance worth 1.2 billion to 1.3 billion dollars. Japan is a significant donor partner with a major presence in Myanmar, and Suu Kyi knows this well. She thanked me for the assistance and cooperation the Japanese have provided to date and hoped that her country would continue to be able to depend on Japan for help in bringing about reconciliation among Myanmar’s peoples and aiding its economic development.”

Some international commentators have voiced concerns about unfair practices seen in this year’s general election, but Sasakawa, who watched voting take place at several polling stations in Yangon as part of an observation team, spoke confidently: “This election was carried out in an extraordinarily fair manner, and the Myanmar military has accepted its results.” The indelible ink used to mark voters’ fingers once they cast their ballots was provided by the government of Japan. 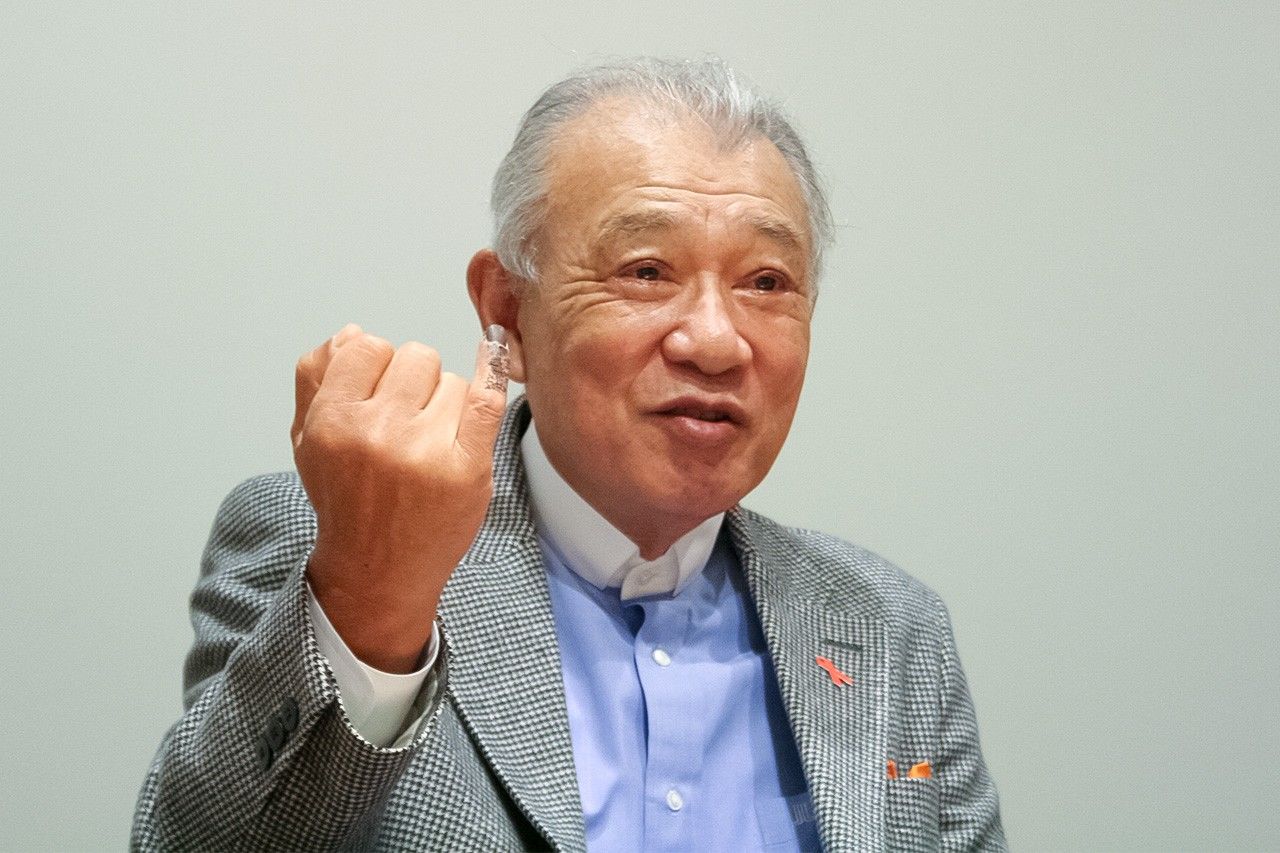 At our November 16 interview, Sasakawa shows a finger he dipped into the ink meant to prevent double-voting. “It’s supposed to come off in a few days, but more than a week later it still looks like this!” he laughs.

(Originally written in Japanese. Banner photo: Myanmar State Counsellor Aung San Suu Kyi, at right, with Special Envoy of the Government of Japan for National Reconciliation in Myanmar Sasakawa Yōhei on November 10, 2020, in Naypyitaw, Myanmar. Courtesy of the Nippon Foundation.)