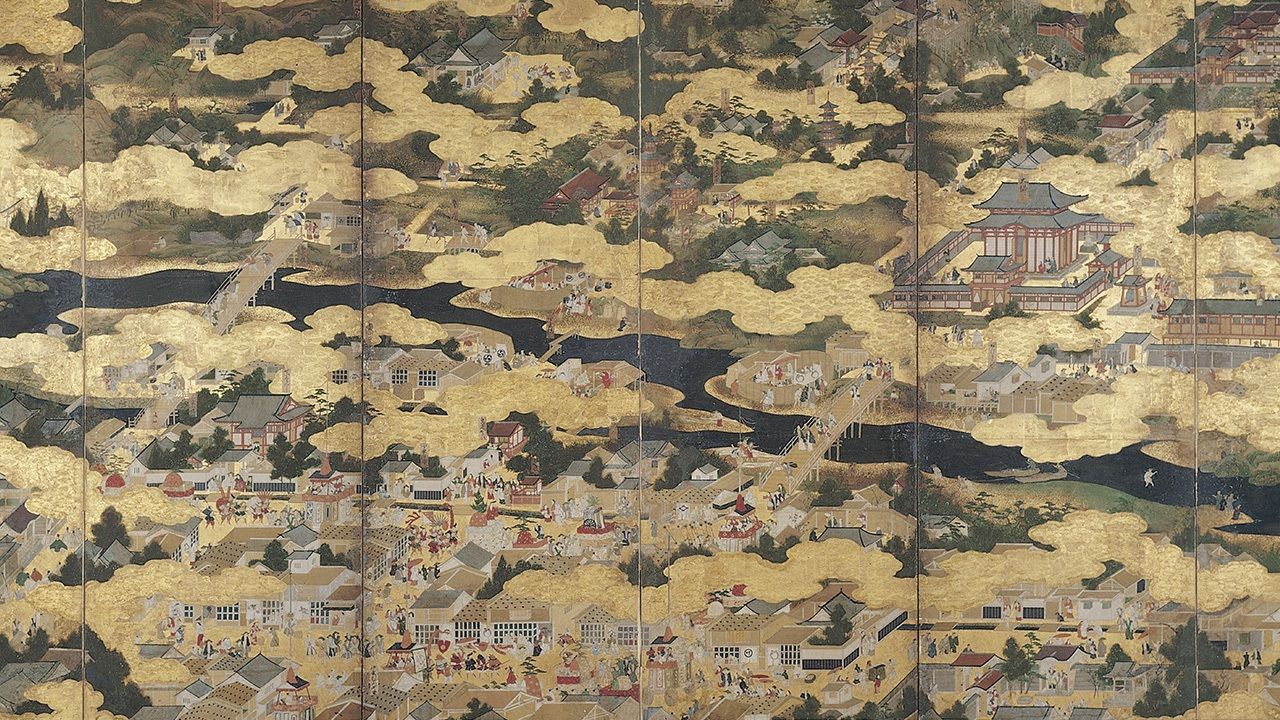 Culture History Disaster Jul 6, 2021
Kyoto was Japan’s capital for more than 1,000 years, over which time it developed rich architectural and artistic traditions. An architectural historian surveys some of the major events that shaped the city over a millennium.

In 2020, the COVID-19 pandemic forced restrictions on movement that affected people across the globe. Japan’s historic former capital of Kyoto, known as a magnet for tourists from around the world, was no exception. From spring to summer, domestic and international visitors disappeared from its celebrated sites. In the autumn, Japanese travelers began to return to a subdued city. But even in 2021, it will be some time before the streets are again bustling with people from various countries.

This is by no means the first time that Kyoto has been threatened by disease. A deadly wave of pestilence led to the imperial court conducting a purification ritual called the goryōe at the temple Shinsen’en in 863. At the time, outbreaks of infectious diseases were thought to be caused by the lingering ill will of vengeful spirits of the dead. By offering prayers to Gozu Tennō, a manifestation of Yakushi Nyorai, the Buddha of healing and medicine, court officials hoped to preserve public health and bring an end to the epidemic.

Further disasters were to follow, though. Mount Fuji erupted in a major event in 864 and the Jōgan Earthquake of 869, the scale of which has been compared to the 2011 Great East Japan Earthquake, spawned a tsunami that devastated large swaths of northern Japan. Coming amid the ongoing local epidemic, these catastrophes only added to anxiety in Kyoto. Courtiers erected 66 hoko (halberds) to appease the spirits—the number representing the regions in Japan at the time—and conducted the goryōe again. This ritual was repeated every summer and eventually developed into the famed Gion Festival, which is associated with worship of Gozu Tennō at Yasaka Shrine and features floats called hoko named after the original halberds. 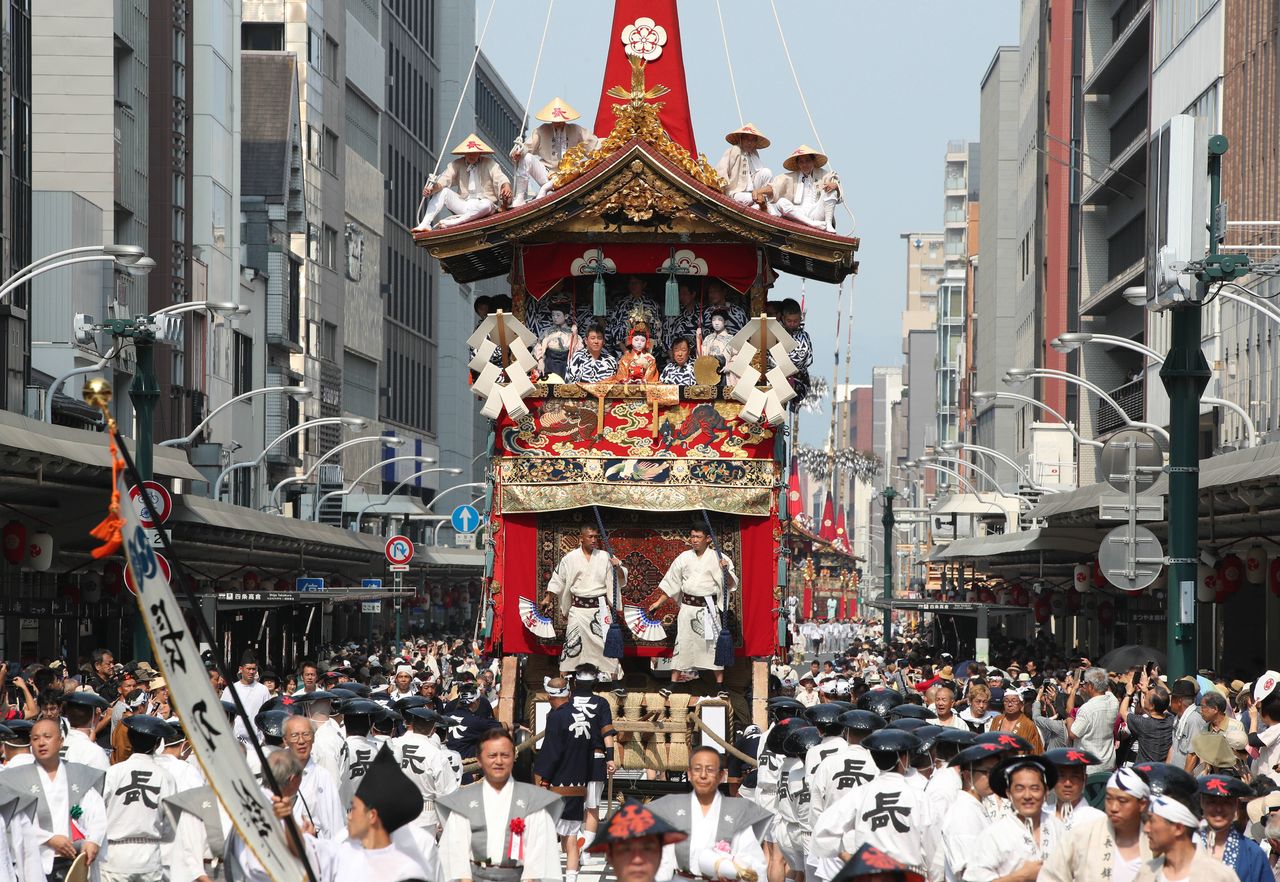 A float is pulled along a crowded street during the 2018 Gion Festival. The event is arguably Japan’s most famous festival, and a symbol of summer in Kyoto. (© Shimogyō Ward, Kyoto/Jiji)

In their beliefs and traditional events, the people of Kyoto remember their ancestors’ battle with disease, more than 1,000 years ago. By learning the origins of major festivals, we can share the experiences of people in the past, reflect on their hardships, and achieve an empathy that crosses time and space.

The Capital of Peace and Tranquility

Kyoto has surmounted disease and disaster in its long years as Japan’s cultural center. It was founded in 794, when Emperor Kanmu (737–806) issued an imperial decree relocating the capital to a new site, which was modeled on Chinese capitals like Chang’an and Luoyang. An 84-meter avenue called Suzaku-ōji served as the north-south axis with grids of streets laid out symmetrically on either side. At its northern end was the daidairi (outer palace grounds), which contained the imperial palace and government offices. At the southern end was the Rajōmon (or Rashōmon) gate with the Buddhist temples Saiji and Tōji to its west and east. The city was divided into square districts, approximately 120 meters in length, and western and eastern markets supplied daily goods.

The new city was initially named Heiankyō. According to one theory, it was constructed following Chinese feng shui, so that each compass direction was guarded by a different mythological creature. Under this hypothesis, the hill to the north Funaokayama represents the turtle-snake Genbu, the Kamogawa river diverted to flow in the east stands for the dragon Seiryō, the western San’indō highway the tiger Byakko, and the southern Oguraike pond the phoenix-like bird Suzaku (after which the city’s main avenue is named).

The name Heiankyō expresses the founders’ hopes in its literal meaning, “Capital of peace and tranquility,” but in reality, it was regularly ravaged by the flames of war. Notably, the streets were the main battlefield of the destructive Ōnin War (1467–77), which ushered in the Warring States period (1467–1568). At the end of the sixteenth century, Toyotomi Hideyoshi, having succeeded in unifying the state, turned the city into a castle settlement centered on his Jurakudai palace, and reorganized the temple districts. The rebuilt city was the prototype for modern Kyoto. 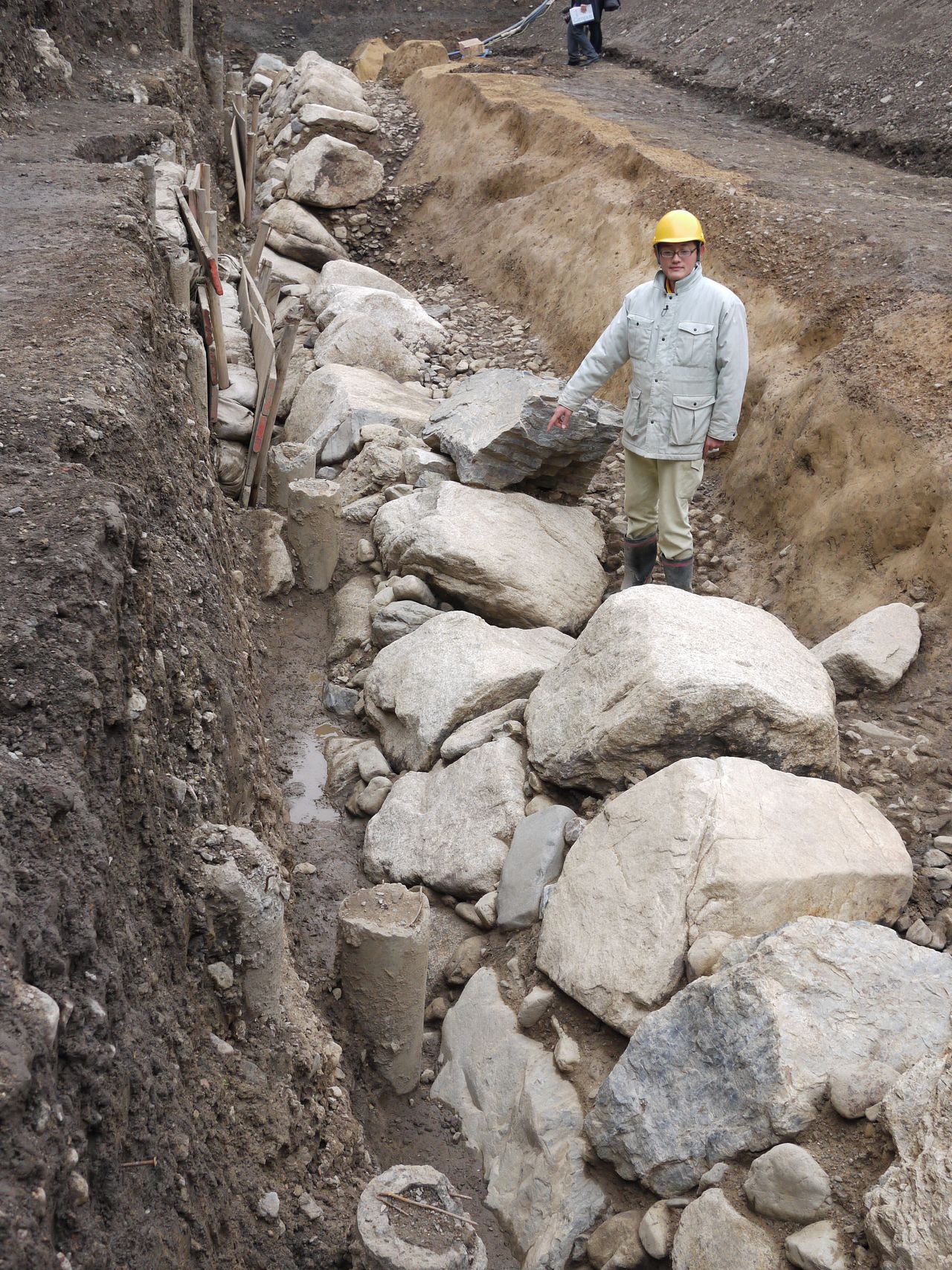 A stone wall from the inner compound of Jurakudai, discovered in Kyoto in 2012. (© Jiji)

The early modern period saw many major conflagrations. In 1788, the Great Fire of Tenmei raged through the city for two days and nights. In 1864, four years before the Meiji Restoration, clashes between forces from the provinces of Chōshū and Aizu sparked fires that consumed some 30,000 buildings.

Kyoto remained the political center of the country even when shōguns set up governments in far off cities like Kamakura and Edo (now Tokyo). This changed in 1869, however, when Emperor Meiji moved east to recently renamed Tokyo, which became the new capital.

The city of Heiankyō, written 平安京, was often referred to simply by its last character 京, pronounced miyako and meaning “the capital.” It was widely considered to be the cultural heart of Japan. It was also known by various other names, including Kyoto, long before that became established as its official name.

Kyoto cultural traditions developed from the rituals of court nobles and samurai warriors as well as customs of commoners and show a rare depth, diversity, and level of sophistication.

The repeated destruction of the central districts by fire meant that the flower of cultural creation was often found in the outskirts of the city. Aristocratic villas, detached palace buildings, and Buddhist temples dotted around the edges of Kyoto show the glories of former ages, not only in their architecture, gardens, Buddhist sculptures, and sliding door and wall paintings, but also in arts like the tea ceremony and flower arrangement.

Uzumasa, a base for a clan that came from the Asian continent in ancient times, is known for the temple Kōryūji with its famous statue of the bodhisattva Miroku. Sagano has the temple Daikakuji, formerly a palace for Emperor Saga. Cultural properties now cluster in Okazaki, which was once the location for a group of temples including Hosshōji, built by Emperor Shirakawa (1053–1129). 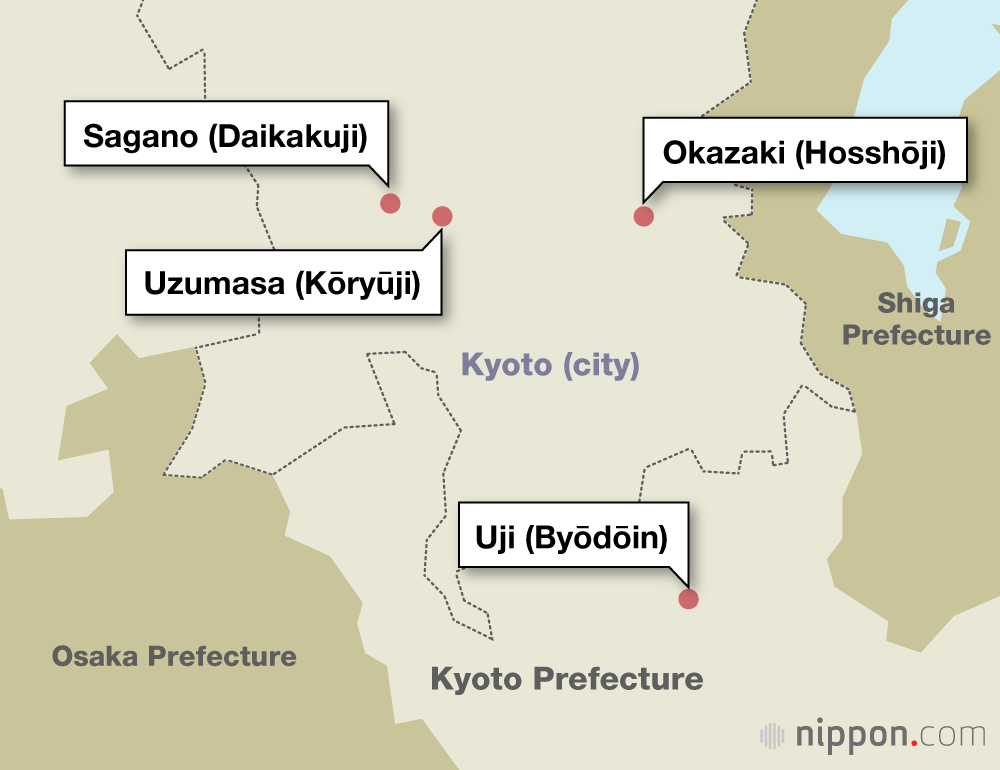 In Uji, the Phoenix Hall at Byōdōin is a symbol of how Japan transformed Chinese antecedents into its own distinctive culture. Together with the elegant Amidadō at Hōkaiji, it shows the fervency of the worship of Amida among the aristocracy toward the end of the Heian period (794–1185), when there was a widespread belief that the world had entered the degenerate age of mappō or “latter days of the Buddhist law.” 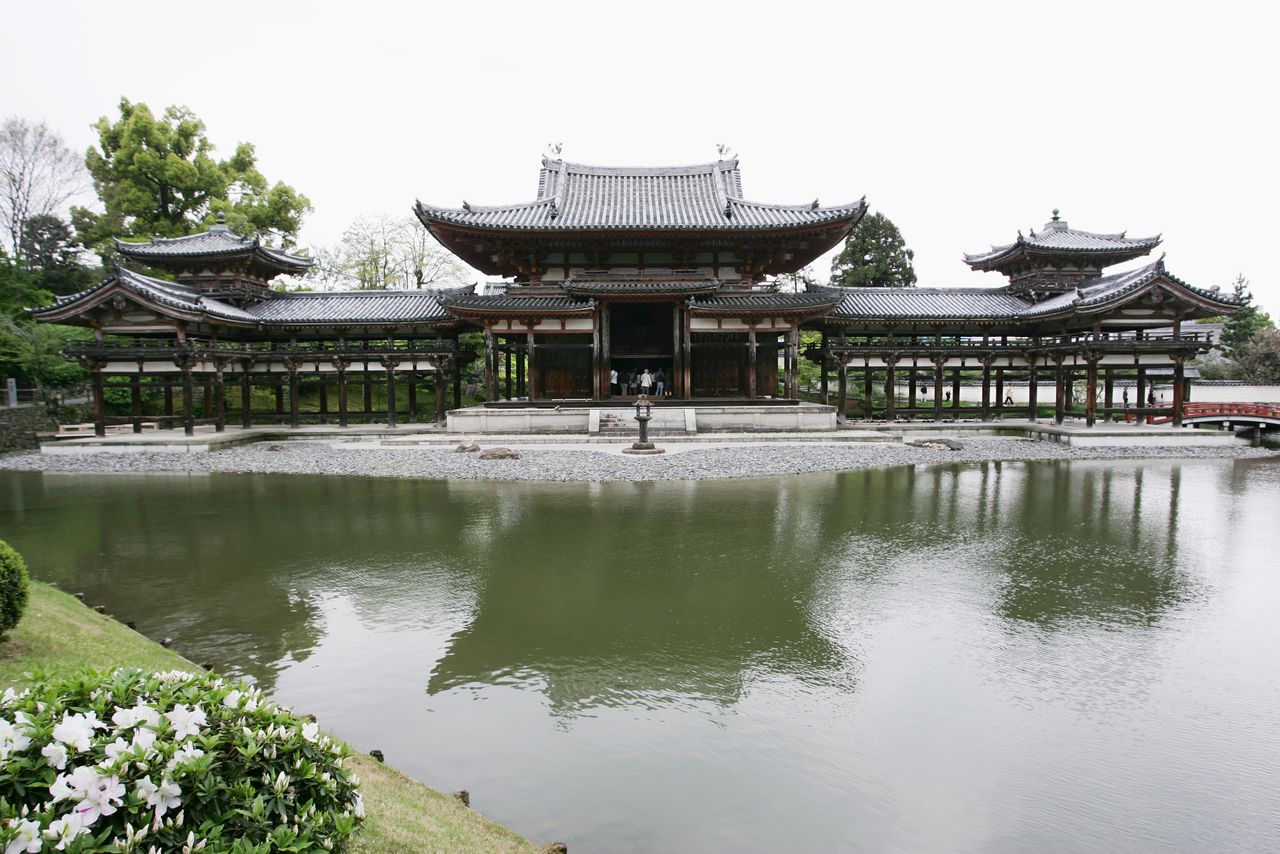 The Phoenix Hall at Byōdōin in Uji, Kyoto Prefecture, is a classic example of a hall dedicated to Amida. Photo taken in 2006. (© Jiji)

In the Muromachi period (1333–1568), shōgun Ashikaga Yoshimitsu sought to combine samurai and court esthetics into what became known as Kitayama culture. The golden pavilion at the temple of Kinkakuji (officially Rokuonji) incorporates the traditional shinden-zukuri architectural style together with the new Zen (Chan) style imported from China. 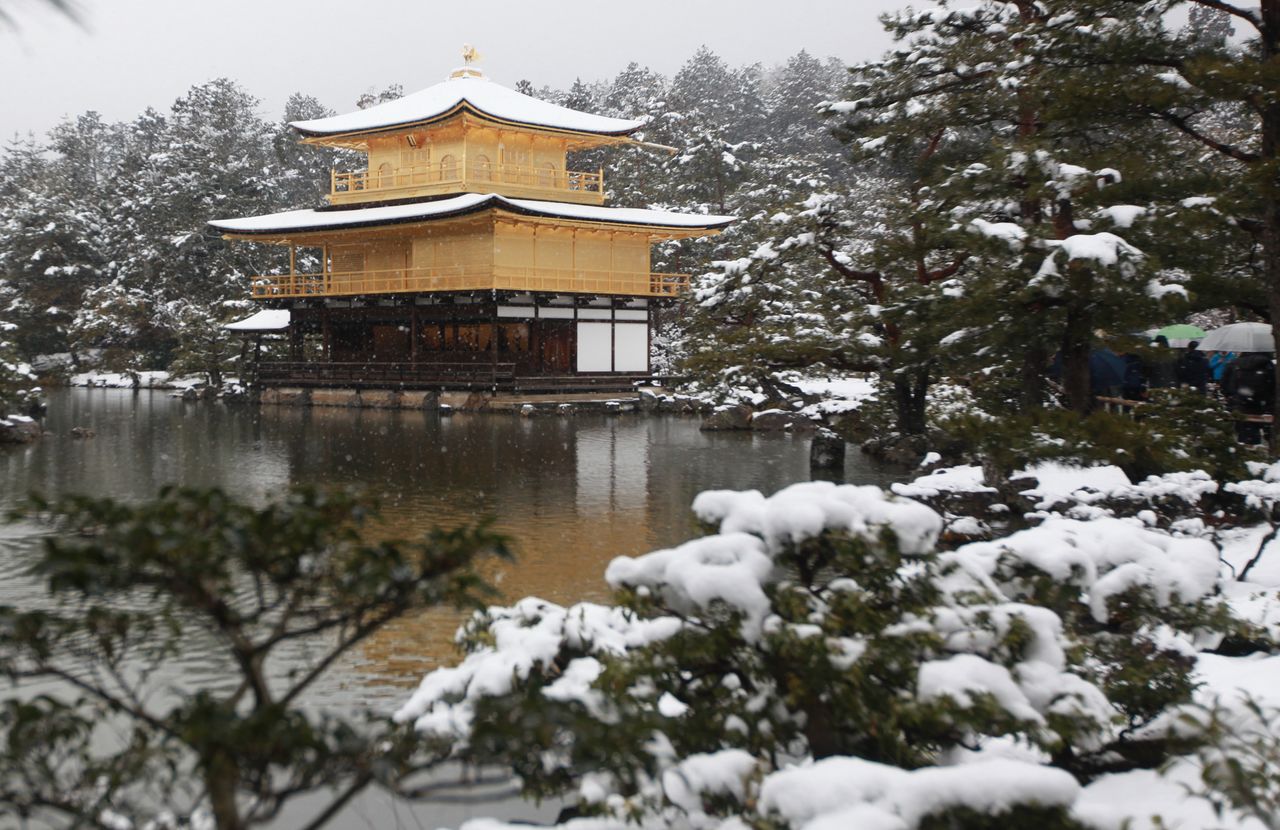 The golden pavilion at Kinkakuji in Kyoto. Shōgun Ashikaga Yoshimitsu bought the site as a villa from the Saionji clan and ordered that it should be converted into a temple after his death. Photo taken in 2014. (© Jiji)

By contrast, the temple Ginkakuji (officially Jishōji) is the symbol of Higashiyama culture, which flourished under shōgun Ashikaga Yoshimasa. In the kaiyū-style garden centered on a pond, the hall Tōgudō is the prototype for the shoin-zukuri style that became the standard for “traditional” buildings and rooms. Quintessentially sukiya architecture also remains in many buildings around Kyoto, such as the Manshuin temple, the Katsura Imperial Villa, and the Shūgakuin Imperial Villa. 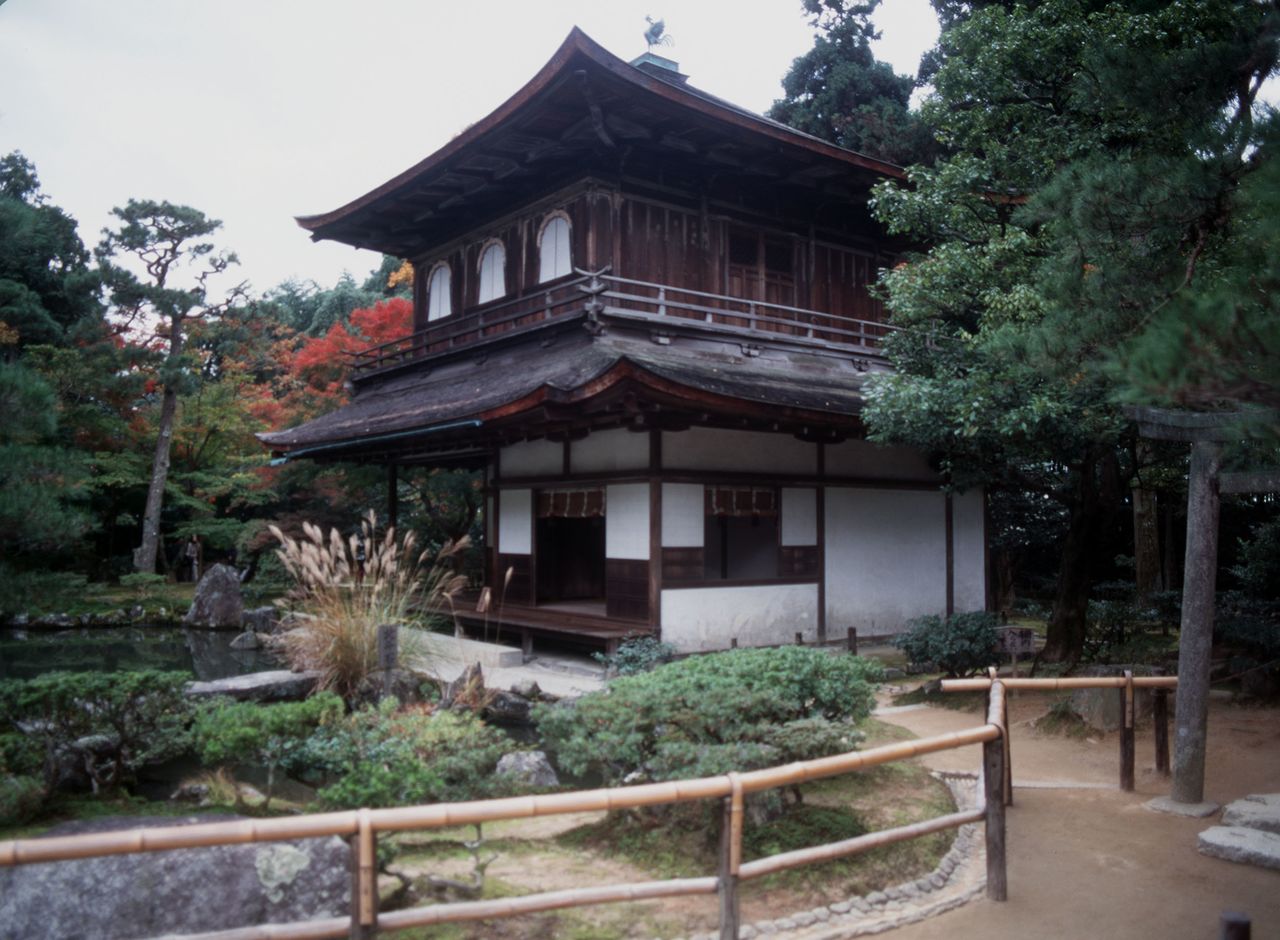 Ginkakuji in Kyoto became a temple after the death of Ashikaga Yoshimasa. Photo taken in 1998. (© Jiji)

After Hideyoshi built his fortress and improved the residential areas, the citizens of Kyoto generally called the area covered by Heiankyō rakuchū and the fields and nearby hills outside it rakugai. These names derived from a shortened form of the Japanese pronunciation of Luoyang (rakuyō) taken as a synonym for the capital city and meant “within the city” and “outside the city,” respectively. Together rakuchū rakugai referred to the whole area, from the streets of merchant families to the rolling fields.

Through the generations, Kyoto developed Japanese culture from overseas elements. By combining and refining, it created new styles that became emblematic traditions.

(Originally published in Japanese on April 20, 2021. Banner image: A bird’s-eye-view of Kyoto and its environs as it appeared in the Muromachi period. © Aflo.)