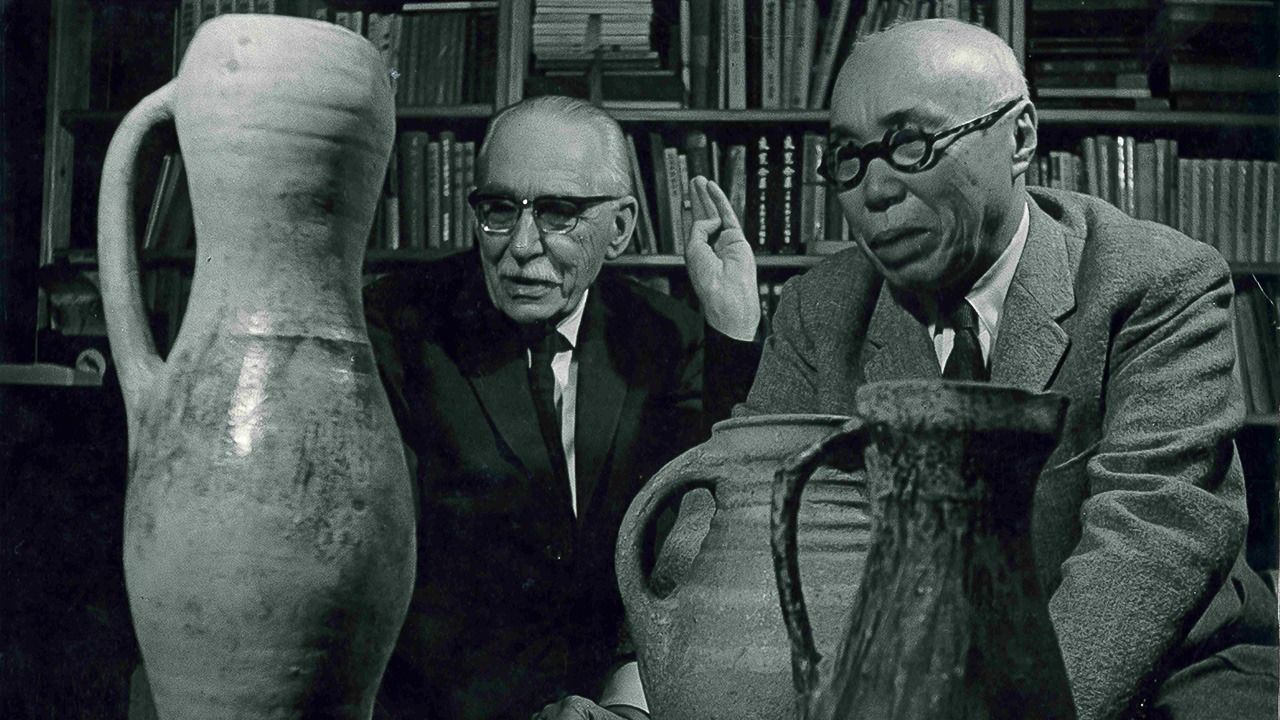 Art Global Exchange Dec 24, 2020
In 1920, Bernard Leach and Hamada Shōji made the long journey from Japan to Britain. There, in the seaside town of St. Ives, they built a kiln and workshop and launched the famous Leach Pottery. One hundred years later, there are still thriving cultural links between UK and Japanese potters, and the anniversary is being marked by lovers of ceramics on both sides of the world.

Celebrating a Century of Exchange

As the seagull flies, the small coastal town of St. Ives is only 22 kilometers from the very southwestern tip of England—but it is nearly 10,000 kilometers from this town of about 11,000 people to Tokyo. Nonetheless, it was here that the renowned Japanese potter Hamada Shōji came in 1920, along with his good friend Bernard Leach, to set up a kiln and workshop. In the decades since, scores of potters have trained at the famous Leach Pottery, helping shape studio pottery movements in Britain, Europe, North America, and across the world.

Leach in turn influenced Japanese pottery through his friendship with Hamada and other significant Japanese art world figures, such as Kawai Kanjirō and Yanagi Sōetsu. Together they founded the mingei folk arts movement, a reaction to Japan’s rapid early-modern industrialization and Westernization, and a return to the simpler, more human values of handmade objects. It’s an aesthetic that’s more relevant today than ever, particularly among those concerned about the environmental consequences of rampant consumerism and cheap industrial goods. 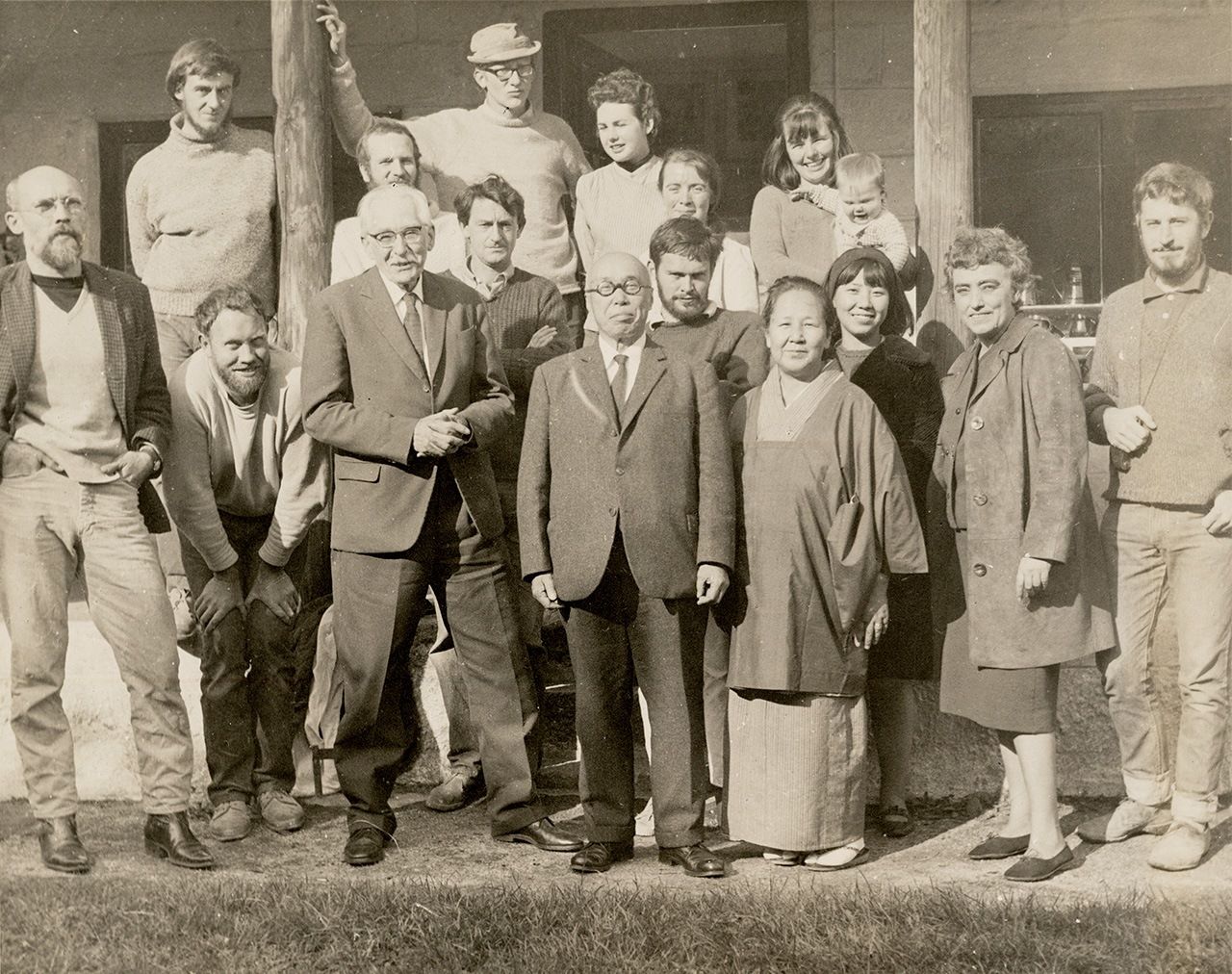 Bernard Leach (third from left, at front) and Hamada Shōji (at center, next to him) at the Leach Pottery with the facility’s staff, c. 1960. (Courtesy of the Crafts Study Center)

And 100 years on, Japan-UK cultural links are still going strong. The Leach Pottery reopened as a trust after restoration in 2008 and is now actively supports exchange activities between St. Ives and Mashiko, the Tochigi Prefecture city where Hamada Shōji set up his own pottery and that remains one of Japan’s main ceramics centers.

Not surprisingly, the coronavirus pandemic has caused considerable disruption. “We had a lot of plans!” says Leach Pottery Directory Libby Buckley of the Leach 100 program of events, residencies, commissions, symposiums, community engagement, and more. “We’ve had to cancel or postpose nearly all of it. The plan is to try and do as much as we can next year.”

One plan was for two potters from Mashiko to come to St. Ives for an artistic residency, and for the Leach Pottery’s lead potter Roelof Uys to travel to Japan. Also, in each of the last 10 years, children from Mashiko have visited St. Ives, and 2020 was to have been the first year that children from the British town travelled to Mashiko. Buckley is hopeful that this will be rearranged for the future.

But other online projects have gone ahead, in particular the Pottery and People campaign, which encourages members of the public to upload short videos about their favorite pieces of pottery. David Kendall—an educator and artist and grandson of Bernard Leach—chose a Korean-influenced teapot made by his own father at the Leach Pottery. 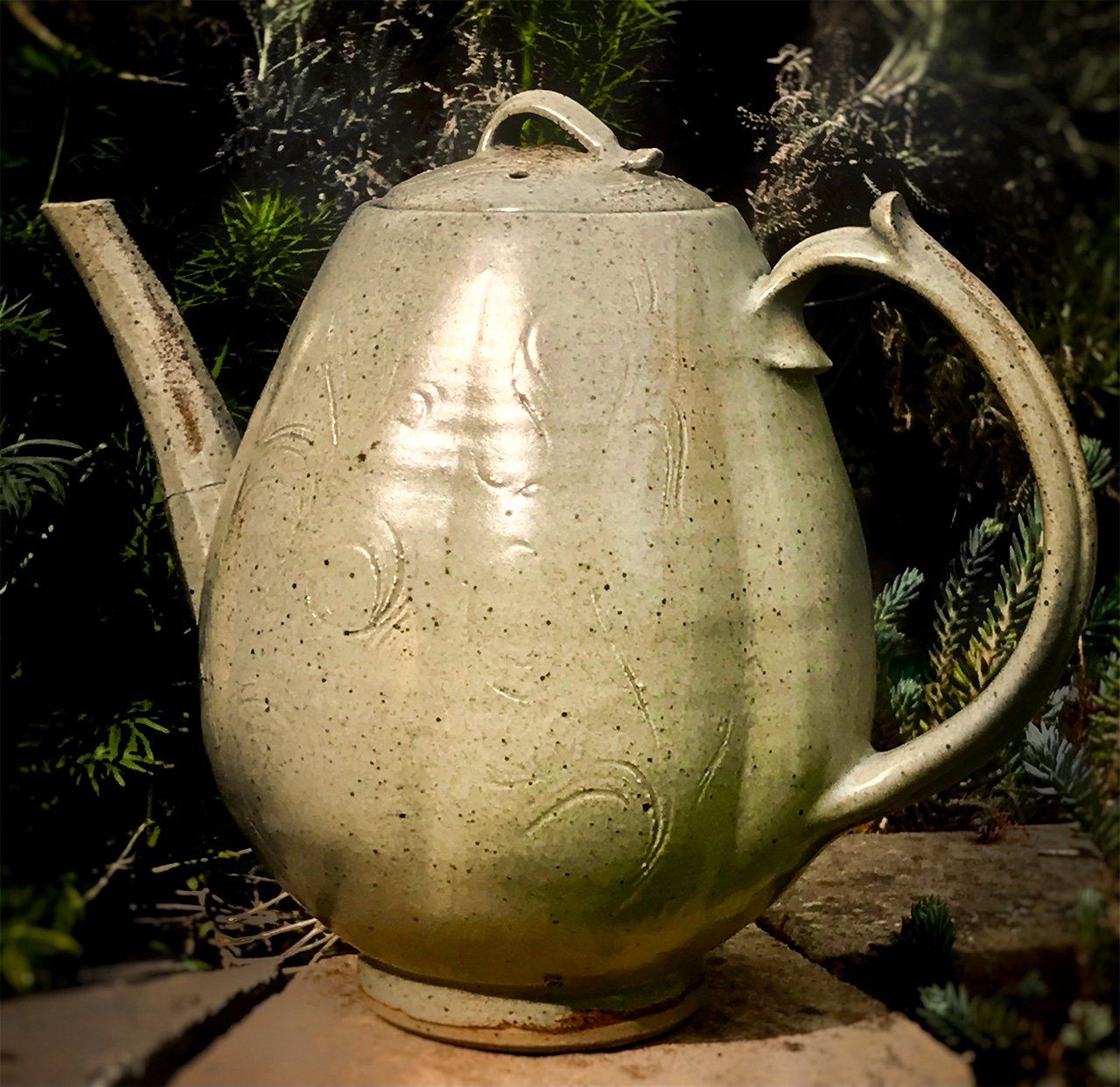 “It has been knocking about in the family for as long as I can remember,” says Kendall, pointing out that at some point the teapot’s spout was broken and repaired. “It has such a glorious form . . . understated, a very cohesive, holistic design.”

“There is something about picking up a pot and holding it in your hands,” says Kendall of pottery in relation to two-dimensional fine art, which doesn’t expect to be touched. “Pots in the main are made to be used. . . . They have a quietness about them that reaches one in quite a fundamental way.”

As a child, Kendall was conscious of his grandfather’s links with Japan. During Hamada Shōji’s time at the Leach pottery, he had made his own bed, carving the tops of the bedposts. Many years later, as a boy, Kendall had slept in that bed, and after it had reached the end of its life, he kept a piece of the carved bedpost, which he still has to this day. “It’s remarkably beautifully carved . . . very sharp on a simple piece of pine,” he says.

St. Ives wasn’t the only place Hamada visited in Britain. The small town of Ditchling, around 60 kilometers south of London, was home to an influential community of artists and craftspeople called the Guild of St. Joseph and St. Dominic. Founded in 1920, the same year Hamada and Leach travelled to St. Ives, the guild was active right up until 1989. Hamada visited Ditchling three times, meeting with many artists and craftspeople, including the sculptor Eric Gill, the artist Frank Brangwyn, and the weaver Ethel Mairet. 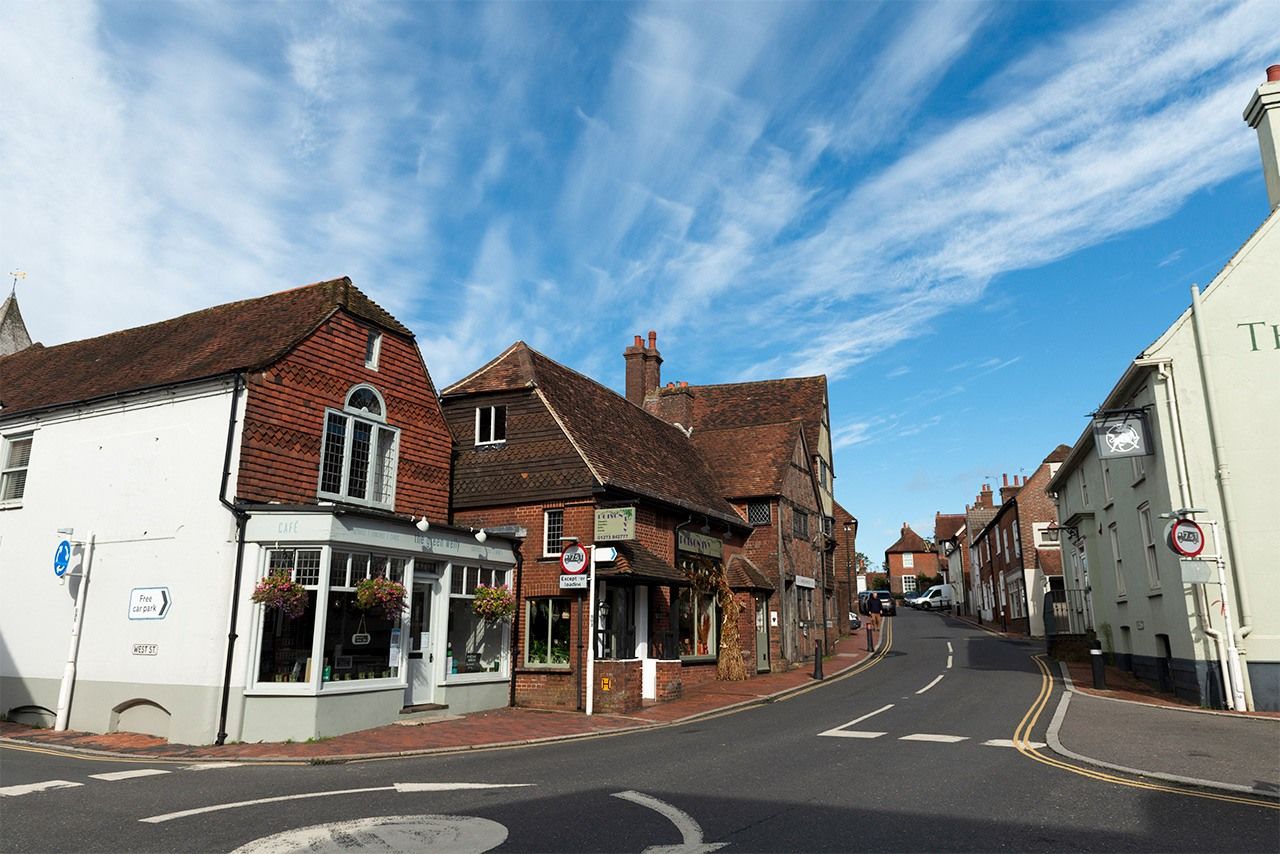 The town of Ditchling. (© Tony McNicol)

The Museum of Art + Craft based in Ditchling is planning to hold an exhibition on Hamada and Ditchling in 2021, the anniversary of his first visit.

“Hamada was very impressed by the style in which they lived,” says museum Director Stephanie Fuller. “They had good quality things and used them every day.” 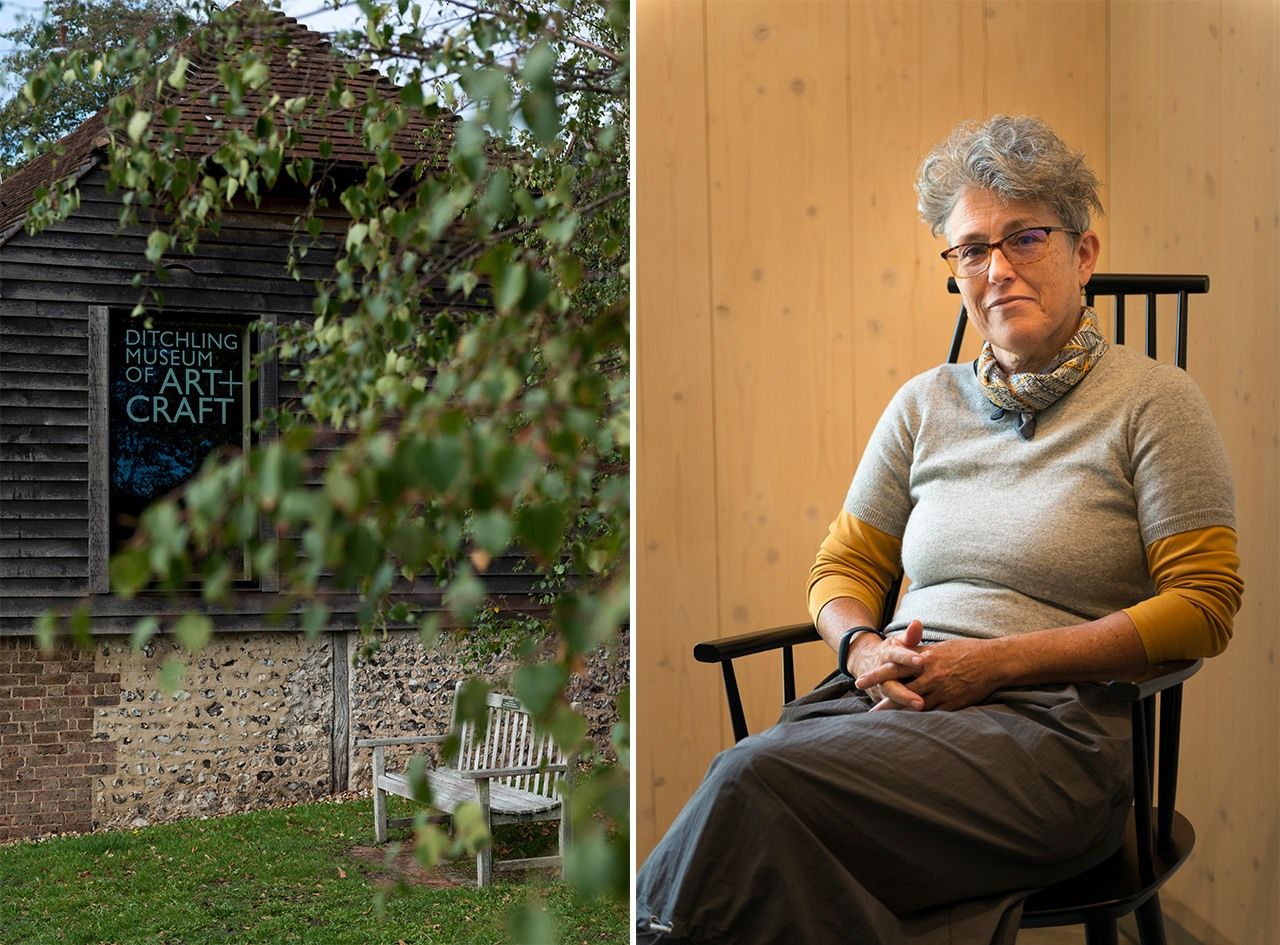 On one visit Hamada bought tweeds from Ethel Mairet and was so fond of them that he wore a tweed suit for his own wedding in Japan instead of the traditional kimono. He was also interested in the merging of home and work life that the guild attempted, and in how the community was based in the countryside, yet close to the city.

“He was very aware that from here you could easily nip to see a dealer in London or go to a lecture,” says Fuller. “The Ditchling visits were what crystalized his decision to move out to the countryside . . . and in the end to settle in Mashiko.”

“Copying the West Is Not Good.”

Hamada and Leach remained friends until their deaths within 16 months of each other in 1978 and 1979. Hamada settled in Mashiko and Leach in St. Ives, although both traveled much as part of their work.

In 1977, the UK-based photojournalist Katō Setsuo visited Leach at his home in St. Ives, becoming the last Japanese journalist to interview Leach, by then well-known in the UK and a revered figure in Japan. 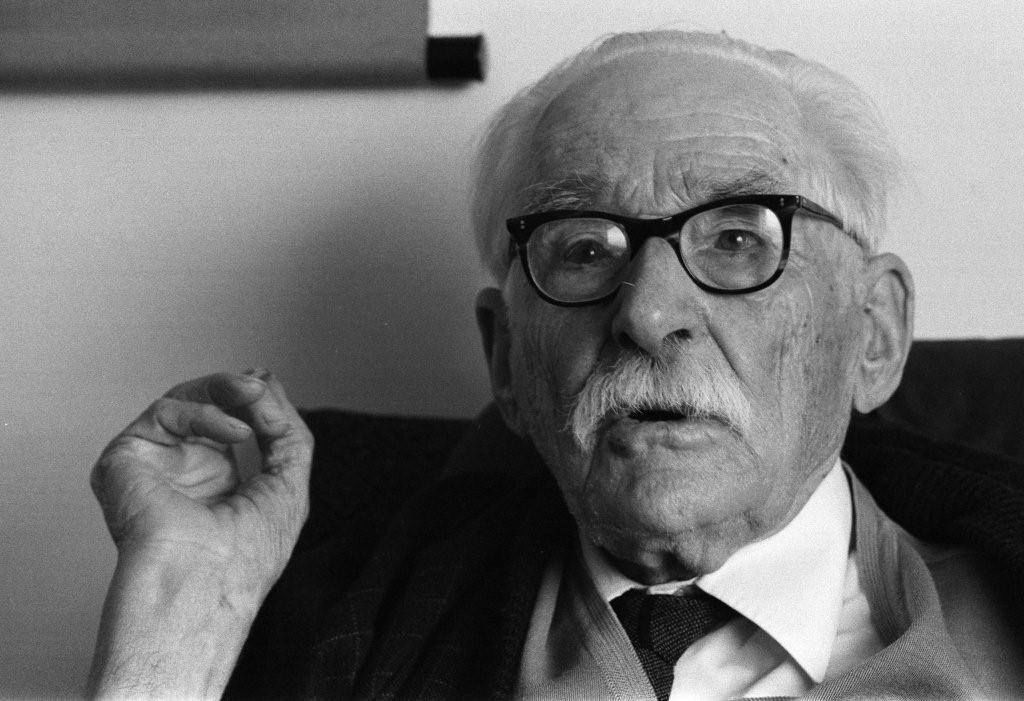 “My first impression was that he looks like a philosopher rather than a potter,” says Katō. Aged 90, Leach was already blind, but it was a rare opportunity for him to chat with a Japanese guest.

“When I saw him, he said yoku irrashaimashita [welcome] in Japanese,” recalls Katō. “We spoke in English . . . and he talked, talked, and talked. I interviewed him in the morning, after lunch, and in the evening.”

They also spoke about his Japanese companion. “Leach said that Hamada Shōji was a very ‘well-balanced’ man. That means body and soul were physically well-balanced, that he had never seen Hamada angry.” 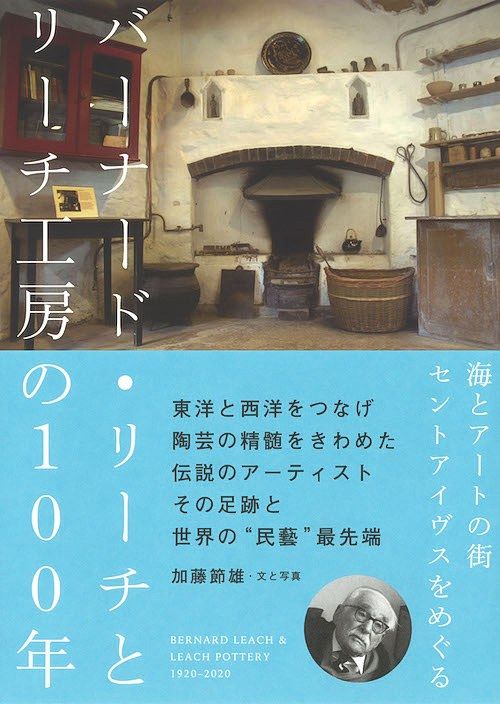 They also discussed pottery and the mingei movement, while Leach lamented the ubiquitous mass production of high-growth 1970s Japan. “He told me that Japan had industrialized too much and had forgotten how important handmade things are. He was a bit worried about where Japan was going and said that copying the West is not good.”

In 2003, Katō became the Japan liaison officer for a project to restore the Leach pottery and helped raise funds from Japanese sponsors. Then, in 2020 he published a book in Japanese about his experiences meeting Leach and being involved in the restoration project. It includes many of his own photos. Despite being released just as Japanese book shops closed due to the coronavirus, it has enjoyed considerable attention, a testament to the ongoing interest in pottery links between Britain and Japan.

Those links that began with a world-spanning friendship, have echoed down the generations. Early this year David Kendall, the grandson of Bernard Leach, travelled to Mashiko and met Hamada Tomoo, a potter and the grandson of Hamada Shōji.

“There was straight away a warmth between us. Somehow, we had a past that had been running in parallel all these years. It was like finding a distant relative,” says Kendall.

Since then he has been in contact with Hamada via Instagram, a medium that Hamada and Leach could surely have never imagined. “Japan is a place I long to return to,” says Kendall. “I feel a great sense of connection.”