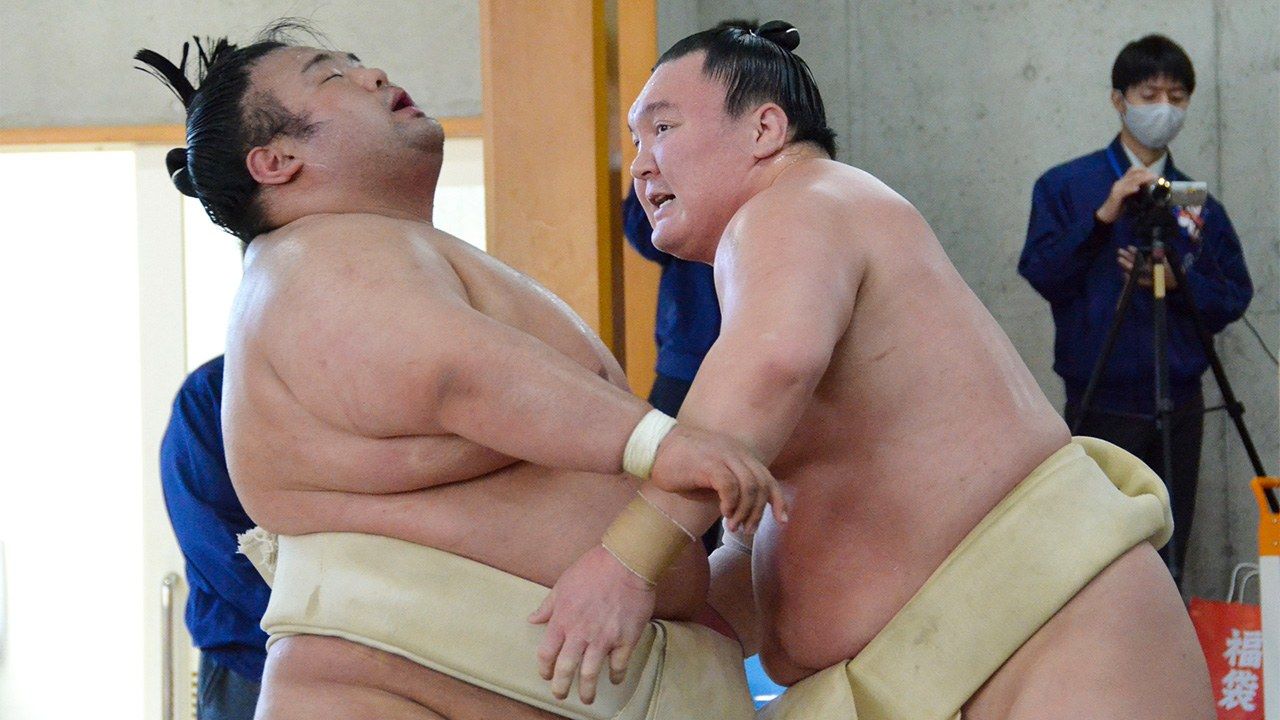 Changing of the Guard in the Sumō World

Sports Culture History Mar 12, 2021
In 2020, there were several upsets in the five Grand Sumō Tournaments that were held, with bottom-ranked rikishi winning two of those basho; the tournaments were also won by a different wrestler each time. One reason for this was the poor condition of the two top-ranked yokozuna, Hakuhō and Kakuryū, and the second-ranked ōzeki. This feels like a changing of the guard, but the wrestlers’ increasing physical bulk is also affecting the sport.

The coronavirus pandemic wreaked havoc on the 2020 sumō tournaments; one of the six annual gatherings was cancelled and another was held without spectators. A different kind of havoc happened on the dohyō. Two bottommost-ranked rikishi in the top makuuchi division, Tokushōryū and Terunofuji, won the January and the July tournaments, respectively. At the September tournament, Sarutobi, newly promoted to the makuuchi ranks, came within a hair’s breadth of being the first top division newcomer to win a tournament in 106 years. And at November’s tournament, bottommost-ranked Shimanoumi held on until the last few days as a contender to win.

Fans were thrilled by the performances of newcomers and veterans alike, but the upsets seen last year are a matter of significance in sumō, a world in which ranking, determined solely on the win-loss records of rikishi in previous tournaments, is counted on to serve as a guide to who are the reliably superior wrestlers.

Last year’s surprising results can be ascribed to the poor condition of the topmost-ranked rikishi. These top-of-the-marquee names, who usually set the pace, sat out or withdrew from most tournaments, especially the November tournament, where ōzeki Takakeishō was the only one among the two yokozuna and two ōzeki to make it onto the dohyō. It was only by chance that Takakeishō won that tournament, a face-saving development for the top ranks, but for days on end, the final bout of the day—a slot usually given to a yokozuna—was between Takakeishō and lower-ranked wrestlers.

Hakuhō and Kakuryū are both 35 now and have absented themselves from matches more and more frequently due to injuries. At the March tournament, held behind closed doors, they both lasted until they faced off in the final day’s match to determine the tournament winner. The May tournament was cancelled, and in July both rikishi pulled out partway through. In September and November, for two consecutive tournaments, they chose not to fight at all. There has been no yokozuna ring entrance ceremony since the thirteenth day of the July tournament.

After the November tournament, their nonperformance earned the two yokozuna a warning from the Yokozuna Promotion Council, exasperated over their repeated absences from the ring. Subsequently, Hakuhō, who had been all set to return to the ring for the January 2021 tournament, was diagnosed with COVID-19 just a few days prior and was sidelined. Kakuryū also decided not to participate, due to lower back pain and other issues. This means that yokozuna have now been absent for four consecutive tournaments.

Given the yokozuna no-shows, that left the three ōzeki, the next-highest ranking rikishi, as the focus of attention. They were all expected to compete in the November tournament, but fans were again disappointed. Asanoyama, promoted to ōzeki after the March tournament, bowed out due to a shoulder injury from the third day onward and Shōdai, promoted after marking the first tournament win of his career at the September tournament, withdrew on day five after failing to recover from an ankle injury sustained in a bout against komusubi Takayasu on the third day.

Each trying to gain advantage over the other at the tachiai (face-off), Asanoyama and Shōdai have concentrated on upping their weight. But it is clear that their lower body fitness has suffered, likely due to lack of practice opportunities because of the ban on degeiko (visiting other stables for training) due to the pandemic.

Over the years, the physical stature of top division rikishi has increased. At the September 1953 tournament, average height was 177 centimeters and average weight was 114.5 kilograms. At the September 2020 tournament, those figures were 184 centimeters and 156.9 kilograms. In other words, over a span of nearly 70 years, rikishi have gotten an average of 7 centimeters taller but over 40 kilograms heavier. Among currently active rikishi, Ichinojō, who at one time weighed over 220 kilograms, is the heaviest at 198 kilograms. None presently weigh more than 200 kilograms, but 14 exceed the 170-kilogram mark. In contrast, only one top division rikishi weighs under 100 kilograms: Enhō, a relative featherweight at just 92.

The presence of non-Japanese rikishi is one reason for increased height and weight throughout the ranks. Hawaii-born Takamiyama, the first foreign wrestler to reach the top sekitori grouping, paved the way for other behemoths: Konishiki, a fellow Hawaiian who reached the rank of ōzeki and weighed over 270 kilograms, and Akebono (Hawaii) and Musashimaru (American Samoa), who made it all the way up to yokozuna.

The next cohort of non-Japanese to feature prominently in sumō have been wrestlers from Mongolia. Similar in physique to Japanese, with a strong lower body and a healthy appetite for winning, they have been dominating the top ranks. Rikishi like Kyokushūzan, who won high marks for technical expertise, and Kyokutenhō, known for being the oldest rikishi ever to win his first tournament in the makuuchi division, were the pioneers for this group. Mongolians making it to the top yokozuna rank have included Asashōryū, Hakuhō, Harumafuji, and Kakuryū.

Several Eastern Europeans, many of whom had experience in wrestling, also made a name for themselves in sumō. These include people like Kotoōshū and Baruto, who made it up the ranks to ōzeki. As sumō has become a more international sport, Japanese rikishi have tried to increase their bulk to be on a more equal footing with the bigger overseas competitors. In addition to practicing traditional sumō fundamentals like shiko (leg-raising from a crouch) and suriashi (sliding feet along without their leaving the ground), Japanese rikishi are also using equipment to work on muscle-building. Now that the emphasis has shifted to getting the upper hand at tachiai, matches are over very quickly and there is less tactical maneuvering.

This change is also reflected in winning technique data. In 2018, records show that for the first time in 15 years there were more wins by oshidashi (pushing an opponent out of the ring with the arms) than yorikiri (a force-out using the entire body) in the makuuchi division. In 2020, wins by yorikiri and oshidashi were more or less even, at 350 versus 336. In contrast to 1978, when there were 528 wins by yorikiri but only 199 wins by oshidashi, it’s clear that sumō relying on greater arm strength is ascendant nowadays.

Other figures tell the same tale. Compared to 1978, there were 134 wins by uwatenage (overarm throw) versus 62 in 2020 over five tournaments, and 73 wins by tsuridashi (frontal lift out) in 1973 but only 3 in 2020, again over five tournaments, indicative of a general lack of variety in winning techniques employed today. Since sumō now relies so much on weight, it’s no surprise that serious injuries are on the rise in the sport.

Caught Between Tradition and Competition

Changing lifestyles have also been responsible for the increasing physical bulk of Japanese wrestlers.

Traditionally, life in a sumōbeya, the “stable”where wrestlers live and train, sees them getting up early and spending the morning training. Around noon, they will have their first meal of the day, a hearty chankonabe stew of meat and vegetables. After the meal, they spend the afternoon napping. Including dinner, they usually eat only two meals a day.

The distinctive daily rhythm of sumō—training, eating, sleeping—made sense as a way of getting heavier. In the past, many youngsters from poor families with many mouths to feed joined a sumōbeya. Stablemasters would take care of feeding, housing, and clothing them, and most aimed to become strong wrestlers.

But in the decades since the country became a leading economic power, Japan has enjoyed an age of plenty, and fewer boys have been pushed by a burning desire to win. Nowadays, most youths entering the sumō world come from ordinary nuclear families and have never been short of food in their lives.

Once they adopt the daily rhythm of sumō, these well-fed young people place themselves at risk of developing lifestyle-associated diseases; it has even been said that in sumō, diabetes is an occupational hazard. In fact, in May 2020, a 28-year-old diabetic wrestler, Shōbushi, died after coming down with COVID-19. There have also been many early deaths from diabetes, cancer, or heart disease among oyakata sumō elders.

Doctors at the sumō health clinic at the Ryōgoku Kokugikan advise wrestlers to stay away from sugary drinks, snack foods, and so on to avoid developing lifestyle diseases, but that is the extent of their involvement in managing wrestlers’ health. This is because sumō traditionally leaves the management of every aspect of wrestlers’ lives, including nutrition, to stablemasters.

But given the number of absences from tournaments due to injury and the growing risk of exposure to new infectious diseases, I believe the time has come for the Nihon Sumō Kyōkai to be more proactive in rikishi health management. Kyōkai head Hakkaku (former yokozuna Hokutoumi) pledged, when he took the position, to expand the clinic’s functions and improve rehabilitation facilities for injured rikishi, but no concrete steps have been taken so far.

The Nihon Sumō Kyōkai became a public interest corporation in 2014. Its articles of association state that the purpose of the corporation is to preserve, pass on, and promote the system and traditions of the “way of sumō.” Sumō became established as a culture with an element of religious rite. Recognized as this country’s national sport, sumō in some ways cannot be regarded simply as a competitive pastime.

Looking back in history, since ancient times the sight of large men engaged in a wrestling match was viewed as a symbol of abundance and became linked with religious rites to pray for a good harvest. Rikishi used to be thought of as the embodiment of good health. Surely it is not the Nihon Sumō Kyōkai’s intention that sumō be equated with poor health in the minds of the public today.