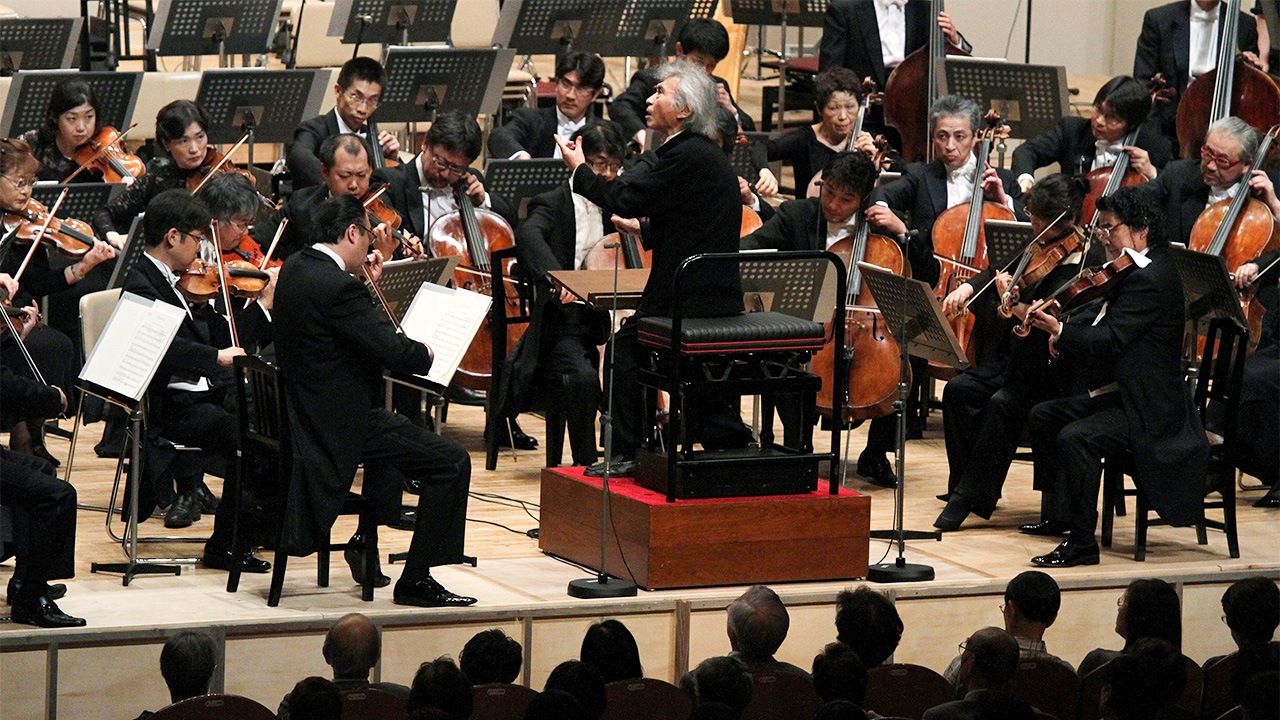 Culture Entertainment History Music Apr 13, 2021
Japan has finally secured a place among the great nations of classical music. This accomplishment is in no small part thanks to the enormous contribution of Jewish musicians. When Western music in Japan was still in its infancy, Joseph Rosenstock, a Jew who fled persecution in Germany, came to Japan, where he helped build the foundations for orchestral development. The seeds planted by such people helped produce world-recognized classical music talent in this country.

What would happen to the classical music world if all Jewish musicians declared a strike? There would be chaos.

Germany’s Berlin Philharmonic would be deprived of the services of its chief conductor and the Netherlands’ Royal Concertgebouw Orchestra of its artistic director. Vienna’s Musikverein would struggle to find a conductor for its annual New Year’s Concert. Daniel Barenboim, James Levine, and Michael Tilson Thomas, who have all previously conducted, are all of Jewish descent. The Vienna Philharmonic could hardly rely on Riccardo Muti—already almost 80 years old—to fill the gap every New Year.

Orchestras worldwide would also be at their wits’ end to find concerto soloists. Pianist Martha Argerich and cellist Mischa Maisky would not report to work. Violinist Gidon Kremer, conductor Maxim Vengerov, pianist and composer Evgeny Kissin, and pianist Hélène Grimaud would not budge an inch. Major orchestras count many Jewish musicians among their members. Music stands worldwide would sit vacant. In some cases, entire sections of the orchestra would be silent.

For many years now, the classical music world has relied strongly on Jewish talent. Despite the trauma inflicted upon Jewish people in the World War II Holocaust, their talented musicians have once again risen to great heights. During their lifetimes, the music world was awestruck at the talent of the pianist and composer Vladimir Horowitz, the pianist Arthur Rubinstein, the violinist Jascha Heifetz, and the conductors Carlos Kleiber and Lorin Maazel, all of Jewish descent.

But what is the relationship between Japan and such Jewish musicians? Before we look at that question, we should consider classical music in Japan as a whole.

Japan is now one of the world’s great classical music nations, yet until the late nineteenth century, it had been closed to the outside world for nearly 200 years, having no interaction with most Western countries. As a result, Bach, Mozart, Chopin, and their music were virtually unknown.

Instead, Japan had its own unique musical culture, played on instruments such as the mandolin-like shamisen, the tsuzumi hand-drum, which the drummer rests on their shoulder to play, and the recorder-like bamboo shakuhachi. Japanese music also used a musical scale differing from the 12-tone system of the Western tradition.

Yet Yamaha produced Japan’s first piano in 1900, just a few decades after the country opened to the West. Just 100 years later, in 2002, the Japanese pianist Uehara Ayako won first prize in the twelfth International Tchaikovsky Competition, playing a Japanese piano—again, a Yamaha. In 2010, the Russian pianist Yulianna Avdeeva played a Yamaha when she won the first prize in the sixteenth International Chopin Piano Competition.

But Japanese brilliance in the music world is not limited to its instruments. Japan has more than its share of musical talents, including the celebrated conductor Ozawa Seiji, who conducted the Vienna New Years’ Concert in 2002, and violinist Gotō Midori, who debuted in New York at the age of 11. And many world-renowned Jewish musicians also host performances in Japan, such as Martha Argerich, who directs the Beppu Argerich Music Festival, held annually in the famous hot spring town in Kyūshū. Tokyo has seven major orchestras, including the NHK Symphony Orchestra, which Jewish-descended Vladimir Ashkenazy directed from 2004 to 2007, and for which André Previn was appointed principal guest conductor in 2009.

What brought about these extraordinary developments?

Naturally, they did not occur overnight. Conductor Asahina Takashi was not even aware of the existence of multiple versions of the works of Anton Bruckner until he traveled to Europe to perform. There is even the heartbreaking story of a Japanese pianist who took her own life in Europe in 1925 when confronted with the gap in her abilities and those of the West. Despite those bitter experiences, Japan has evolved into a force to be reckoned with, in no small part thanks to the contribution of Jewish musicians.

Jewish conductor Joseph Rosenstock fled to Japan to escape persecution in Nazi Germany, and went on to conduct the New Symphony Orchestra, predecessor to the NHK Symphony Orchestra, from 1936 to 1946. Previously, he had conducted the Metropolitan Opera in New York City, and at the Mannheim National Theater. Under Rosenstock’s strict hand, the New Symphony Orchestra matured, in this country that, less than 100 years earlier, had been closed to the West. If the orchestra’s timing erred, or the ensemble was in disarray, he would vent his anger before locking himself in the antechamber. At those times, the cellist Saitō Hideo, who spoke fluent German, would pacify him. Later, Saitō founded the Tōhō Gakuen School of Music, where he taught conductor Ozawa Seiji.

In 1951, the orchestra received financial support from Japan’s public broadcaster and became the NHK Symphony Orchestra. Like the famous US-based NBC Symphony Orchestra, it grew through its performances broadcast on radio and television. The orchestra toured Europe on numerous occasions, showcasing Japanese soloists including the pianist Nakamura Hiroko. Interestingly, Nakamura went on to study at the Juilliard School, a private performing arts conservatory in New York City, under the Jewish pianist and renowned teacher Rosina Lhévinne.

Had Rosenstock instead moved to the United States to conduct, the NHK Symphony Orchestra would not be as we know it today, and Ozawa may never have taken the world by storm. Had Rosina Lhévinne not taught at Juilliard, Nakamura may not have won fourth prize in the Seventh Chopin Piano Competition in 1965, the same year when Argerich came in first.

The story of Ingrid Fujiko Hemming, another star Japanese pianist, also has a Jewish connection. She studied under Jewish pianist Leonid Kreutzer at the Tokyo Music School, which later merged into the Tokyo University of the Arts Faculty of Music. Kreutzer previously taught at the Berlin Academy of Music, but he too fled persecution in Nazi Germany, teaching piano and conducting in Japan, where he spent the remainder of his life. After Hemming moved to Europe to perform, she met and played before the Jewish composer, conductor, and pianist Leonard Bernstein, who was then in Vienna. He created the opportunity for her to give recitals in that city.

Bernstein was also influential in Japan in other ways. It was he who selected Ozawa as assistant conductor of the New York Philharmonic, where Bernstein was at the helm. Conductor Sado Yutaka was another disciple of Bernstein who went on to conduct the Berlin Philharmonic. Ōue Eiji, another conductor, also studied under Bernstein, later conducting Tristan und Isolde at the Bayreuth Festival in 2005.

The Kansai region has four major orchestras, the most famous of which, the Osaka Philharmonic Orchestra (formerly the Kansai Symphonic Orchestra), was established in part thanks to a Jewish conductor, Emmanuel Metter. Metter moved to Japan in 1926, where he conducted the orchestra at Kyoto Imperial University (now Kyoto University), and taught conducting to Asahina Takashi. Asahina went on to conduct the Osaka Hōsō Kangen Gakudan (Osaka Radio Symphony Orchestra), then later founded the Kansai Symphonic Orchestra, greatly contributing to the development of classical music in the Kansai region. Asahina was succeeded by Bernstein’s disciple, Ōue Eiji.

The Tokyo Music School employed other Jewish instructors in addition to Leonid Kreutzer. One of them was the opera composer and conductor Manfred Gurlitt. In 1939, he moved to Japan, marrying the opera singer Hidaka Hisako and becoming conductor of the Fujiwara Opera, established by the tenor Fujiwara Yoshie. Gurlitt also provided guidance for the Tokyo Nikikai, a group formed mainly by graduates of the Tokyo Music School to develop opera in Japan. He was also closely involved in two other major organizations that continue to lead the Japanese opera world.

These are but a few of the celebrated Jewish musicians who played a crucial part in Japan’s growth into a classical music giant, building its foundations in piano, operatic, and orchestral performances. We should take a moment to give them a standing ovation.