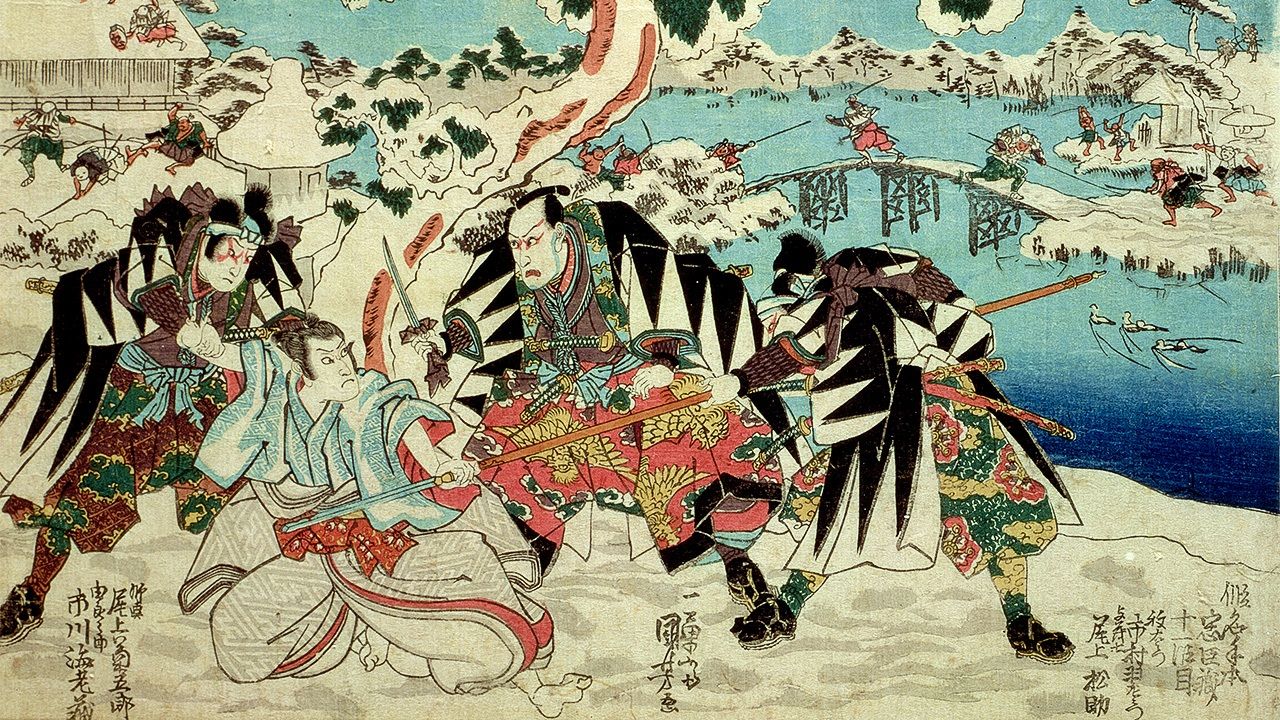 Samurai Vengeance: The Undying Popularity of the 47 “Rōnin”

Culture Entertainment History May 27, 2021
A real-life act of group vengeance in Edo at the start of the eighteenth century inspired highly popular puppet theater and kabuki dramas, and the story is still being adapted for television and film today.

In a notorious historical act of vengeance, on January 30, 1703, a group of 47 rōnin (leaderless samurai) raided the residence of Kira Yoshinaka in Edo (now Tokyo), killing Kira and 28 of his retainers. It caused a sensation in the city, which had enjoyed a century of peace since the start of the Edo period (1603–1868). In today’s terms, the assault by an armed group on the home of a government official would be described as terrorism.

Almost two years, earlier, in the spring of 1701, Asano Naganori, the leader of the Akō domain (now Hyōgo Prefecture), had cut Kira with his sword while in Edo Castle, and was thereby ordered to kill himself by seppuku. Kira was in charge of teaching protocol at the castle, and he lied to and abused Asano, who drew his weapon when he could stand it no longer.

The reason for Kira’s attitude toward the visiting domain leader is unclear. Suggested explanations include that he wanted more payment for his instruction, that Asano would not share the domain’s lucrative method for making salt, that he would not show Kira a secret scroll, or that there was a dispute involving heterosexual or homosexual desire. Following Asano’s enforced suicide, the domain of Akō was confiscated by the shogunate, but 47 of his former retainers, led by Ōishi Kuranosuke, settled the score by attacking Kira’s residence. Their killing of their former master’s enemy won admiration from many as exemplifying the spirit of bushidō (the way of the warrior).

A kabuki version of the event was performed 12 days later. In an age without the Internet and mass media, people who wanted to know what really happened sought to find out from a dramatic recreation. But because the truth was still obscure, the writer could give free rein to the imagination in producing an exciting story. After another three days, however, the production was shut down. While the public was keen to discover the reasons for such a large-scale act of vengeance, the shogunate did not want the uproar surrounding an assault so close to its seat of power to get out of hand. Throughout history, the powerful work to bring the media into line and cover up scandals or other embarrassing happenings.

Later retellings disguised the narrative by setting it in earlier historical eras. In 1748, the ningyō jōruri (puppet drama) Kanadehon chūshingura (trans. Chūshingura: The Treasury of Loyal Retainers) was first performed. This 11-act masterpiece lasting more than 10 hours became a standard for puppet theater and kabuki adaptations, such that the title Chūshingura became shorthand for any fictional account of the story.

Nearly half a century on, the powers that be were likely not as concerned to censor depictions of the events. Even so, the story was transposed to the fourteenth century setting of the classic war tale Taiheiki, with Kira renamed as Kō no Moronao and Asano as En’ya Hangan. These were purely cosmetic changes; everyone knew it was about Kira and Asano. The lead character Ōboshi Yuranosuke was a version of Ōishi Kuranosuke, but the use of a character from his real name (蔵) in the phrase Chūshingura (忠臣蔵), which could be translated as “the loyal retainer Kura,” offered a broad hint as to his real identity.

The play was performed repeatedly as puppet theater and kabuki, and gained a reputation in the kabuki world as a surefire way of bringing in spectators during lean spells. Later fiction, kōdan storytelling, film, television drama, and traditional and popular songs based on Chūshingura also became hits with the Japanese public.

Why is Chūshingura so popular? The aesthetics of bushidō may explain part of its draw, but it also includes several elements that particularly appeal in Japan.

The first of these is hōgan biiki, or sympathy for a tragic hero. In this phrase, hōgan refers to Minamoto no Yoshitsune, the most distinguished of the military commanders during the Genpei War (1180–85) against the Heike clan. After the Heike were defeated, Yoshitsune fell out with his brother Minamoto no Yoritomo and was driven into exile and ultimately to his death. There is a tendency in Japan to support such tragic heroes. Asano’s bullying by Kira and the hardships of the rōnin fit this pattern, so many wish to cheer on the group of retainers who have to put up with so much. The Chūshingura story skillfully encourages these sentiments, and when the rōnin finally kill Kira—after long months of subterfuge, leaving their families and pretending to fall into drunkenness and dissipation, so he would let his guard down—it feels like a fitting reward for all they have been through. Even today, one can feel a desire to support the underdog.

The second factor is teamwork. This is not the tale of one mighty hero. Japanese people tend to enjoy hearing about weak individuals coming together to form a powerful group. This kind of teamwork is not only seen in sports like rugby and baseball but also children’s anime and games where friends band together to fight, as well as television dramas that win fans through stories where background figures make contributions, rather than the hero doing everything. While there is one central character in Chūshingura, he is always backed up by the 46 other samurai.

The third aspect the story plays into is the aesthetic of transience, a beloved trope in Japan. Although the rōnin cut Kira down, this is not a happy ending, as they are ordered to commit seppuku by the shogunate—a death penalty imposed for their criminal attack. Yet they win the honor of warriors, and what is seen as a noble death. The fourth characteristic of self-sacrifice is seen not just in the warriors, but in the many women and subordinates who help the rōnin as well.

The fifth key component is the poetic justice of kanzen chōaku, (rewarding virtue and punishing evil). In Chūshingura, Kira is painted as a villain, but he is actually said to have been regarded fondly in his territory in Mikawa province (now Aichi Prefecture) as a leader who rode around on a reddish-brown horse and talked with the local farmers. He was also a man of culture, well versed in the tea ceremony and art. However, all that is forgotten. The Kira of Chūshingura is corrupted by avarice and lechery. In the story, the villains have to be rotten to the core to catch the audience’s interest. Among the rōnin from Akō are some who refuse to take part in the revenge plot and flee. Ōno Kurobei, for example, is portrayed as a wily coward who comes to act as a spy for Kira in Chūshingura: The Treasury of Loyal Retainers. Apparently, he was actually a proficient financial official.

These kinds of themes all have their appeal for Japanese people, and also for many in other countries too.

There were some 300 samurai in the Akō domain. Of these, 47 participated in the vengeance plot, so what happened to the other 250? Their stories are the hidden secrets of Chūshingura’s popularity.

Of the 11 acts in Chūshingura: The Treasury of Loyal Retainers, the first four act as prologue, taking the plot up to the seppuku of En’ya (Asano).

The next two acts are centered on Hayano Kanpei, a samurai who was not among the 47 rōnin. While he was one of En’ya’s retainers, he was not present at the incident that led to En’ya’s suicide as he had an assignation with his lover Okaru. Ashamed of his disloyalty, he runs away to Okaru’s family home, where he becomes a hunter.

Sensing Kanpei’s desire to join the vengeful rōnin and vindicate his honor, Okaru resolves to sell herself to a brothel to raise the funds for him to do so. Her father is carrying the money home along a road at night when he is attacked by the bandit Ono Sadakurō, who seizes the gold and stabs him to death.

Sadakurō is then shot accidentally by Kanpei, who is out hunting a boar. Not knowing who the victim is in the dark, Kanpei searches him and finds a purse of riches. He decides to give the money to the vendetta group, and runs back home with it, but then comes to think that he killed his father-in-law and is so conscience-stricken that he commits seppuku. This takes events through the fifth and sixth acts. The seventh act is about Okaru, now in Kyoto’s Gion entertainment district, and Ōboshi Yuranosuke.

Kanpei dies before he can contribute to taking revenge. Sadakurō, the robber he killed, was also one of En’ya’s retainers, but he was disinherited by his father Ono Kudayū (Ōno Kurobei), an adviser to En’ya, and was reduced to becoming a bandit. In the seventh act, it is discovered that Kudayū is reporting secretly to the enemy Kō no Moronao, and Yuranosuke kills him. Three acts, or around a quarter of the play, center on people like Kanpei, Sadakurō, and Kudayū, who do not take part in the assault on the residence.

There are others, including those who die, become sick, find new positions to support their families or lovers, or simply flee. There is even someone who oversleeps on the day of the assault. In real life, Ōishi is said to have prepared a separate force in case the initial attack failed. These various episodes provided rich material for later works. Chūshingura is not simply a tale of righteous heroes, steeped in bushidō. The stories of those who do not take revenge, and might commonly be seen as disloyal, are also fascinating.

Thus, an event of three centuries years ago has continued to be talked about for the rich narrative seen repeatedly in arts and entertainment. In Japan’s militaristic period, it was used to laud the spirit of selfless devotion in dying for justice, while I hear that in other countries, it has been a path to knowledge of bushidō and Japanese aesthetics. In the twenty-first century as well, Chūshingura continues to be an endlessly compelling story that transcends its era.