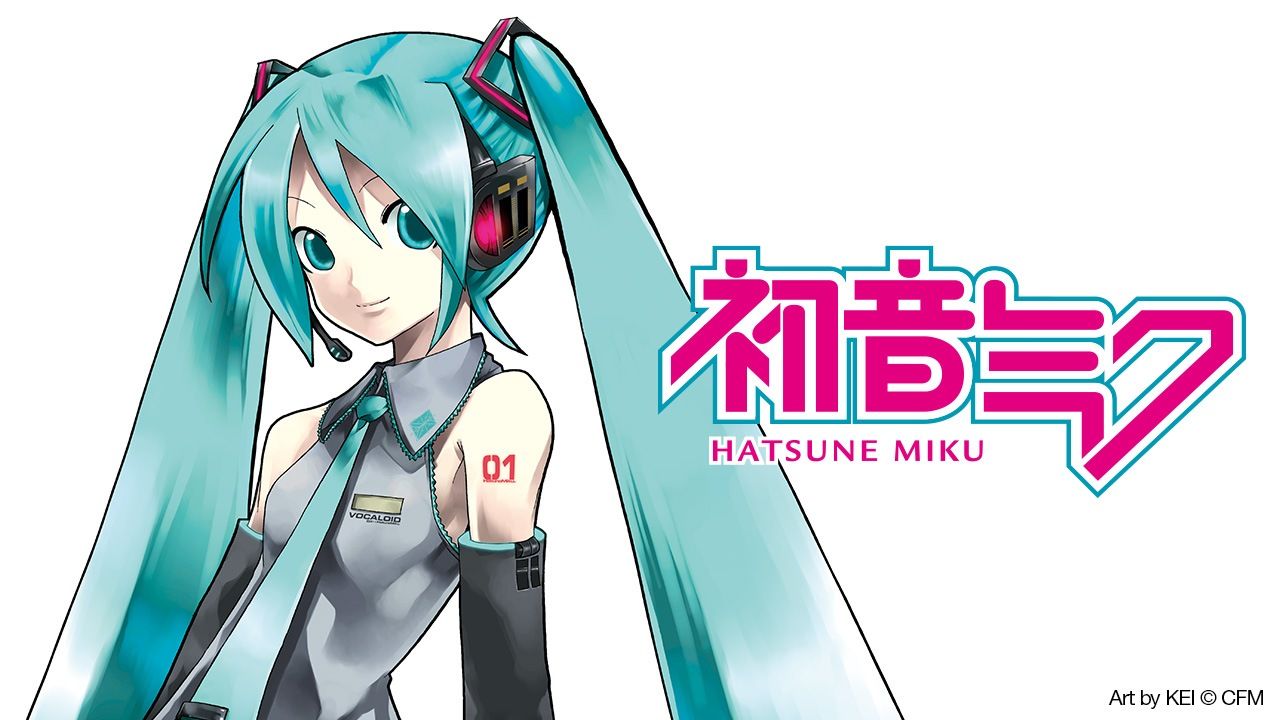 Culture Entertainment Music Apr 28, 2021
A new wave of artists who use Vocaloid singing-synthesis software, such as Yonezu Kenshi and Yoasobi, are transforming the Japanese pop scene. The wellspring of their creativity is the cyber diva Hatsune Miku—an anime-styled digital star whose success has been driven by countless creative users. This article traces the roots of this made-in-Japan musical revolution.

A New Wave of Artists from the Vocaloid Scene

The “Vocalo P” are transforming the Japanese music scene. Vocalo P refers to producers who use Vocaloid singing-synthesis software to create music and upload it to the internet. Long a subcultural phenomenon, now songs created by this new type of recording artist are climbing the Japanese pop music hit charts and going mainstream.

Perhaps the most well known is the singer-songwriter Yonezu Kenshi. His latest album, Stray Sheep, came out in August of 2020 and secured the #1 spot on the Billboard Japan hit chart. Yonezu began his career as a Vocalo P in 2009, posting his original Vocaloid songs under the name Hachi. In 2012, he launched a new career as a vocalist under his own name. Today he represents a mainstream Japanese pop artist.

Yoasobi is another example. This duo’s big break came from the Vocaloid scene. Their December 2019 debut single “Yoru ni Kakeru” reached #1 on the Billboard Japan chart, catapulting the pair to national popularity. Yoasobi consists of the composer Ayase, known for his activity as a Vocalo P, and the singer Ikura. Other popular artists such as Yorushika, Eve, and Suda Keina launched their careers from the Vocaloid scene as well.

Why are Vocaloid-affiliated artists enjoying such success in the current Japanese pop scene? The answers can be found in a revolution whose seeds were nourished in the thriving online culture of the twenty-first century.

The birth of the movement can be traced back to August 31, 2007, the date that the very first Hatsune Miku software went on sale.

Hatsune Miku was created by a company called Crypton Future Media based upon Yamaha’s Vocaloid 2 singing-synthesis technology. It allowed users to input melodies and lyrics, which would then be output as synthesized vocal tracks. A huge hit from virtually the moment it went on sale, Hatsune Miku took off among amateur musicians who created music on their personal computers and uploaded it to the internet.

Until that moment, the only way a would-be star could release a pop song was by finding a singer and recording them, or singing and recording themselves. Even before the arrival of Hatsune Miku, a variety of products utilizing Vocaloid technology targeted this same demographic of musicians.

What made Hatsune Miku so revolutionary was its use of a character – the eponymous Hatsune Miku. Based on the voice of singer Saki Fujita, it sounded far more natural than any synthesis software that had come before, hooking fans with its charming singing voice.

That made Hatsune Miku more than just composing software. It was a product that allowed anyone to try their hand at producing a singer. Thus the ability to freely manipulate the title character played a major role in its success. The first release of the software featured a colorful illustration of a character with a streaming green “twintail” hair style, who was 16 years old, 158 centimeters tall, and 42 kilograms in weight, and whose favorite genres were idol singing and dance-pop. The software allowed users to customize Hatsune Miku to their preferences, changing clothing, appearance, and personality to suit the music they made. 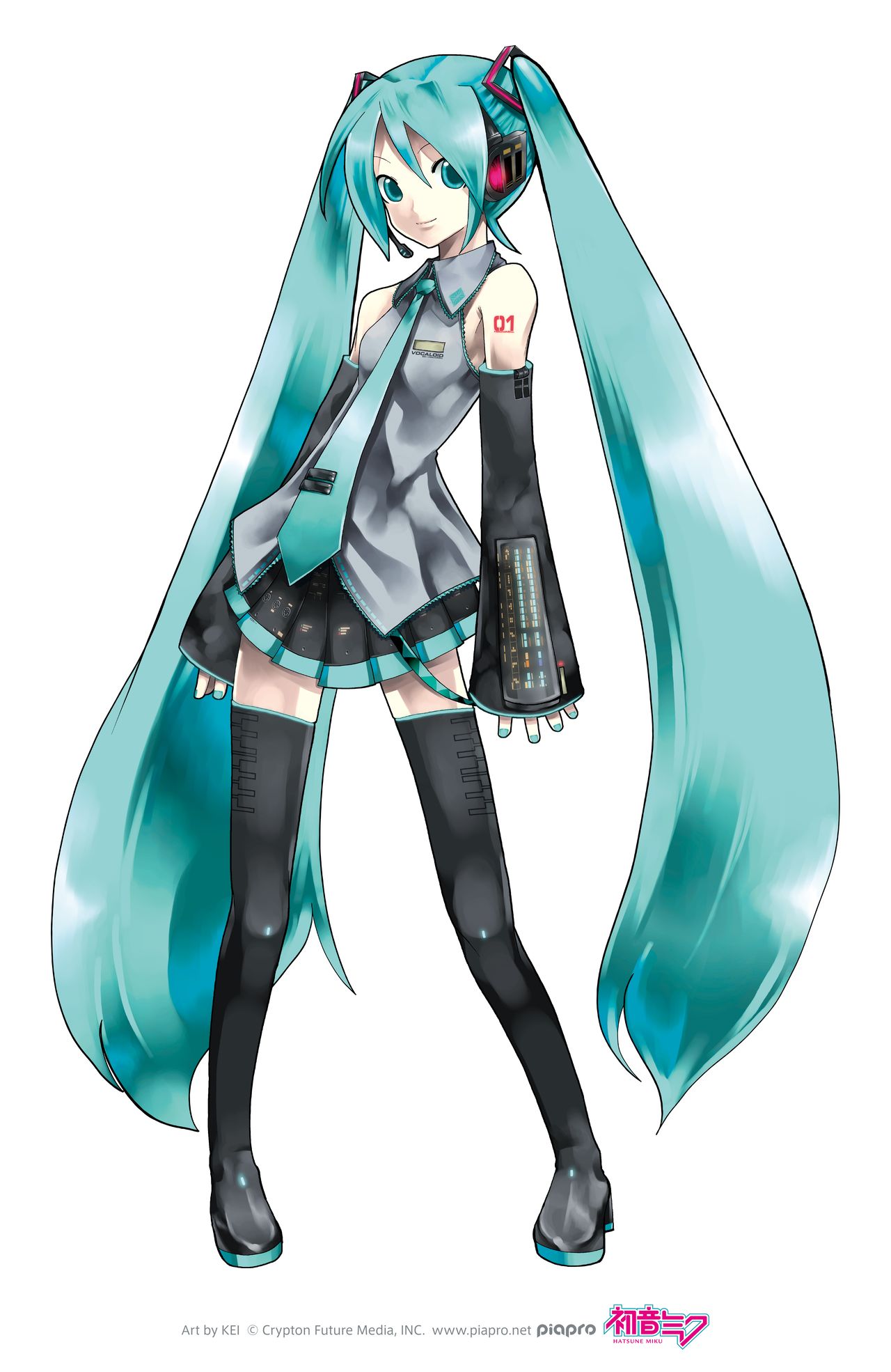 The Hatsune Miku boom isn’t only about musicians; it is fueling the creative efforts of a wide variety of artists. It is proving particularly appealing to illustrators, who continue to generate a great deal of art based on the concept.

The majority of musical creators who use Hatsune Miku to compose songs post their work on streaming sites such as NicoNico and YouTube. These songs can inspire artists to create illustrations, which in turn inspire animators to create music videos. Sometimes other singers then perform covers, or choreograph original dance moves, or even pen novels based on their readings of the lyrics. Quoting and remixing, users collaborate in a cycle of creative energy.

Crypton Future Media has played a major role in promoting the propagation of these secondary works. On December 3, 2007, it launched Piapro, which outlined guidelines for character usage. By instituting an open-source copyright system (similar to software such as Linux) it made its characters freely available for private, nonprofit applications. Piapro also provided a platform for users to upload their creations and make contact with one another.

Originally positioned as a “cyber diva,” Hatsune Miku’s success wasn’t driven by anime styling. Rather, it was the confluence of the creative energies from countless users that swirled and merged online, propelling the fad into a movement, and then into a totally new form of cultural expression.

In this way, fans began responding not only to Hatsune Miku as a character but to the creative efforts of the individual Vocalo P songmakers as well. One of the triggers for this phenomenon was the release of the track “Meruto” in December 2007, created by Ryo (Supercell), a creative collective of the composer Ryo with other illustrators and designers. The song proved hugely popular among users, breaking 3 million views in just a year.

Popular songs spawned popular covers posted by users who tried singing them themselves; at one point so many original songs and related videos crowded the NicoNico rankings that it caused a minor scandal. “Meruto” marked a turning point from early efforts that centered heavily on Hatsune Miku, such as “MikuMiku ni Shite Ageru” and “Koisuru Voc@loid,” to more authentic pop songs of the sort actual idol girls might sing.

Ryo (Supercell)’s major label debut in 2008 represented the fruit of this new movement. From 2009 to 2010, a variety of new artists began making names for themselves on NicoNico. Chief among them were Yonezu Kenshi, then working as Hachi, and Wowaka, from the rock band Hitorie.

A New Genre of Japanese Music

In the 2010s, the phenomenon spread into the mainstream. Key to this transition was a song called “Tell Your World” by Livetune, a creative unit centering on the veteran Vocaloid creator KZ. Originally written for a commercial for the Google Chrome Global Campaign, the release of this song in March 2012 by “Livetune featuring Hatsune Miku” symbolized the growing popularity of the Miku movement.

This represented a new potential for creative efforts centering on digital singing technology. The internet allowed for remote collaborations across regional and even national lines, and provided a space where even the unknown were given a shot at competing for the eyes and ears of fans. This was a new world, where anyone with a personal computer could make a global debut – a musical revolution sparked by Hatsune Miku.

Supported by countless creators, the Hatsune Miku creative movement refuses to fade. Now it has spread to younger listeners, whose first contact with pop music in the form of Vocalo P rather than human performers is fueling the rise of a new “Vocalo-native generation” of creators.

The Vocaloid scene has now established itself as a unique new form of Japanese musical culture, and I predict it will continue to produce a great deal of new artistic talent in the years to come.