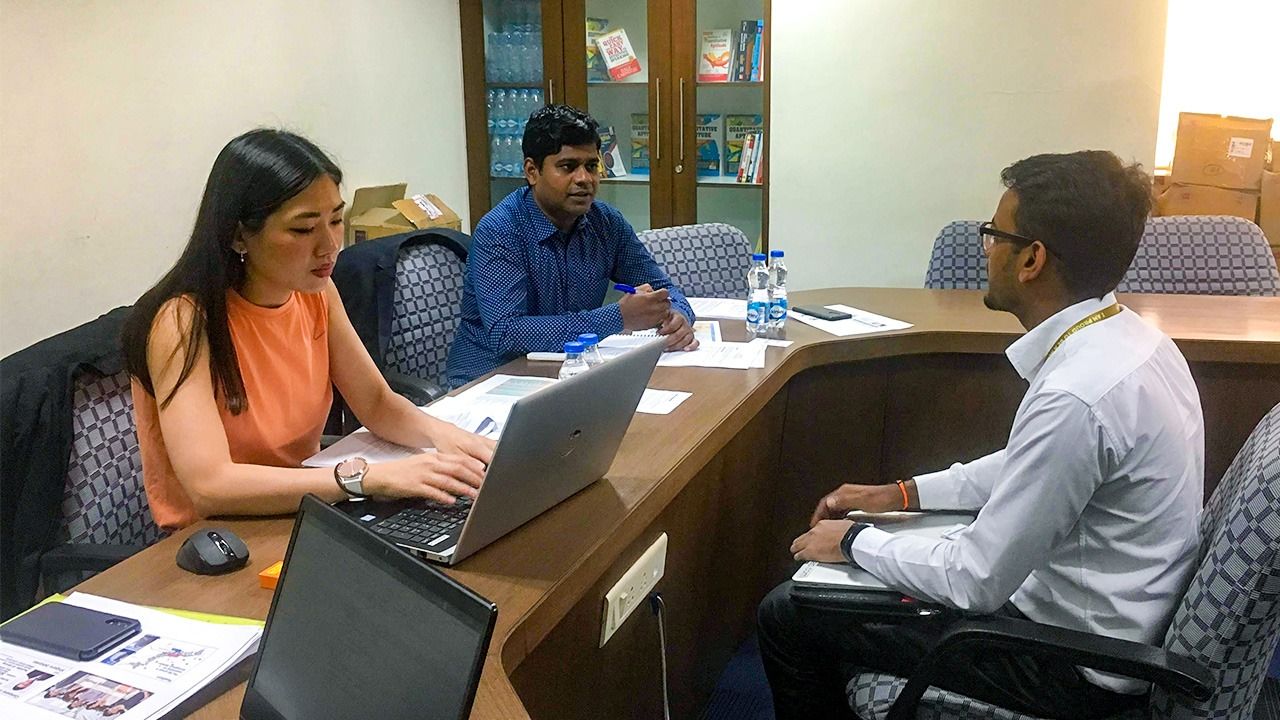 Society Work Economy Apr 2, 2021
Japanese companies are increasingly looking to India to meet rising demand for IT engineers as Japan ramps up digitalization.

Japanese Prime Minister Suga Yoshihide has made the digitization of society a priority. However, efforts to accelerate the process, including Suga’s plan to establish a new digital agency, face a serious challenge: not enough IT engineers. An April 2019 survey by the Ministry of Economy, Trade, and Industry found that demand for IT workers in Japan would exceed supply by 300,000 in 2020, a shortfall that is expected to swell to 450,000 by 2030. 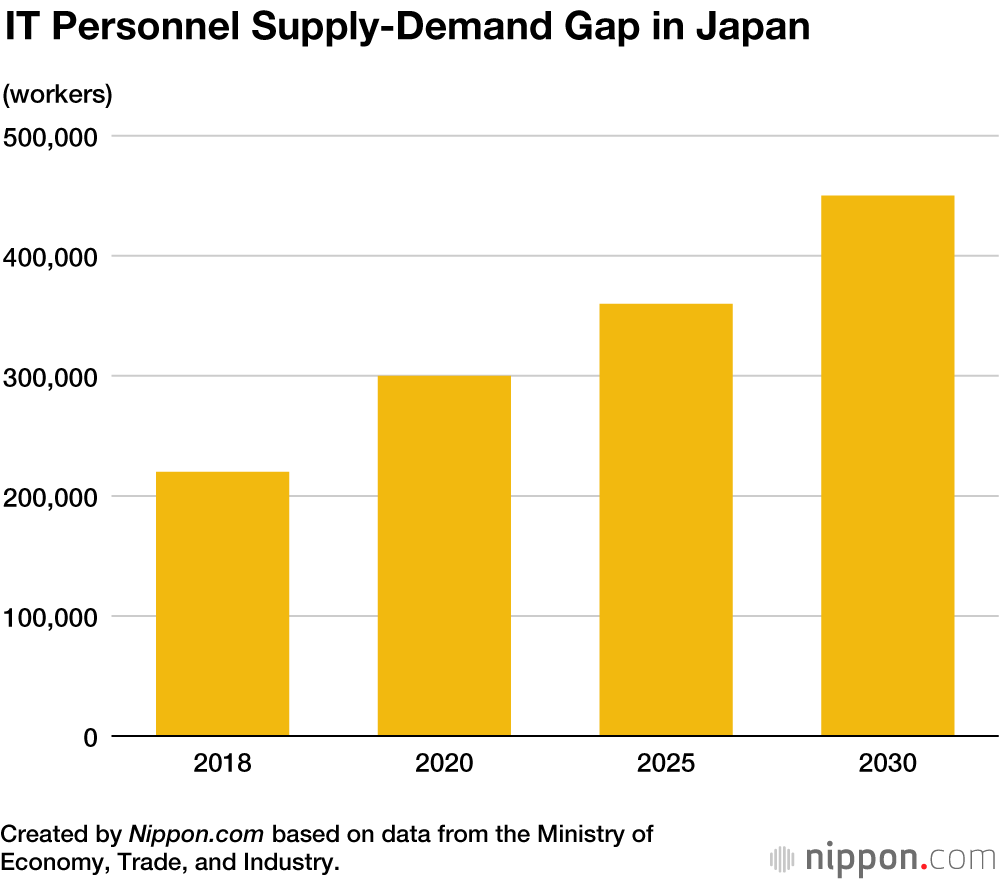 Japanese recruiters looking to make up the shortage of IT workers in Japan are increasingly turning overseas. However, Kimura Yūichi, the diversity head in the e-marketing department of Zenken, an IT and language education firm, insists that more needs to be done to secure global talent to meet rising needs. “Japan’s employment market remains relatively insular,” he says. “This has hampered attempts to fully tap into the broader pool of foreign engineers.”

Zenken started recruiting foreign talent for Japanese companies around three years ago as a way to invigorate Japan’s international job market. While the company’s activities are not limited to a specific field, the growing demand for engineers has made IT a core sector from the start. 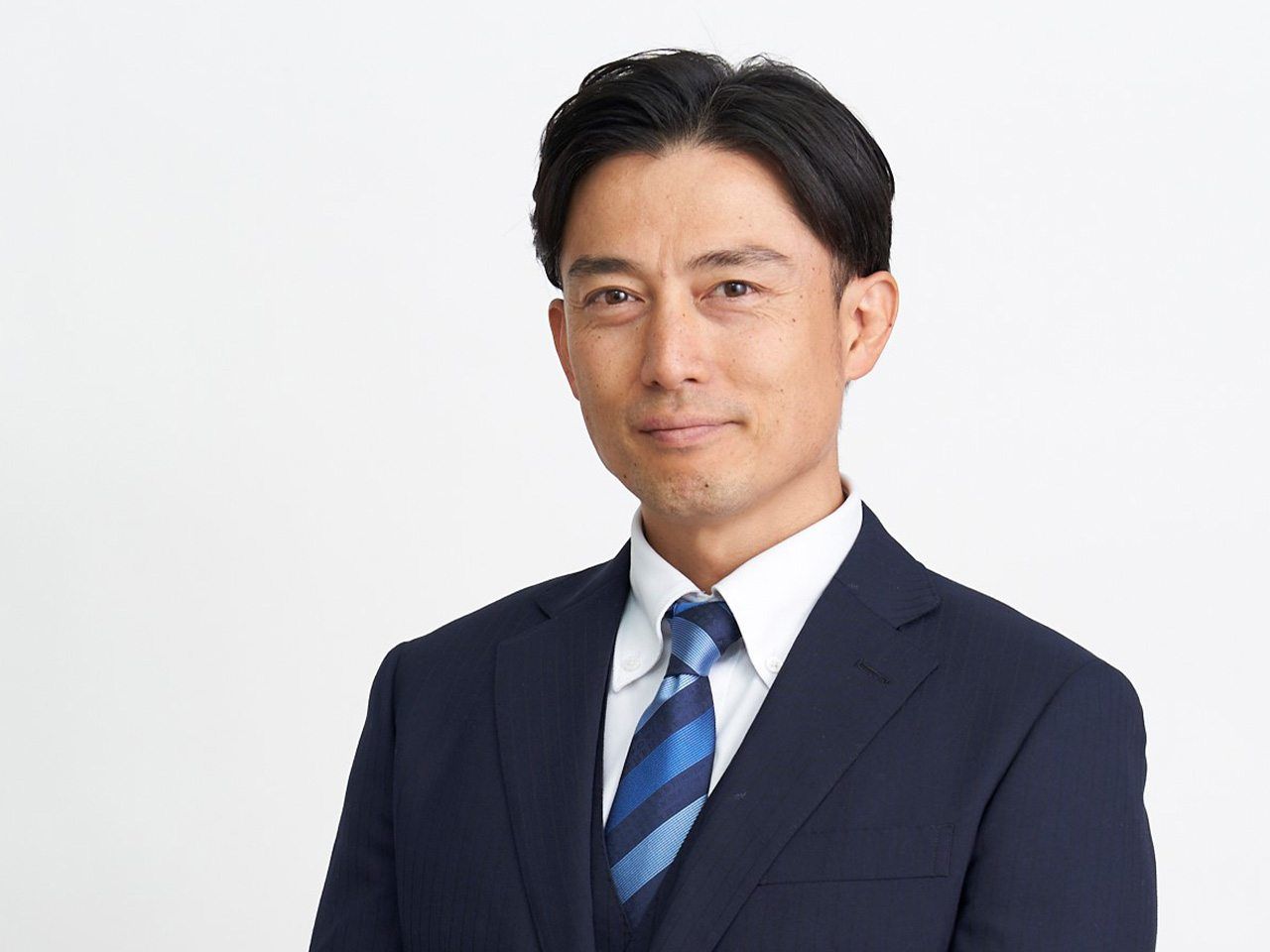 Kimura says that the firm focused its efforts on three factors: quality, quantity, and motivation. “We examined countries with large pools of highly skilled engineers and assessed the level of interest of workers in coming to Japan,” he explains. “We drew up a list of around ten nations—including India, Vietnam, and Bangladesh—and went to investigate conditions on the ground.”

The research was far from perfunctory. Zenken interviewed foreign candidates and had them take the same IT engineering tests as Japanese applicants. By comparing results, the firm determined students in India provided the best match of skills and ability, leading it to focus its efforts there.

One factor in Zenken choosing India is the country’s capacity for nurturing IT talent. According to the All India Council for Technical Education, a government body in India, the country has more than 10,000 universities of technology and other institutions training IT engineers. By comparison, Japan has fewer than 800 universities in total, not all of which have engineering departments. “India also has 250 million people in their twenties,” says Kimura, “many of whom see a medical degree or a career as an IT engineer as the only paths out of poverty.” He attributes differences in the motivations of IT students in India compared to their Japanese counterparts as being fundamental to the country producing so many brilliant undergraduates and young engineers. 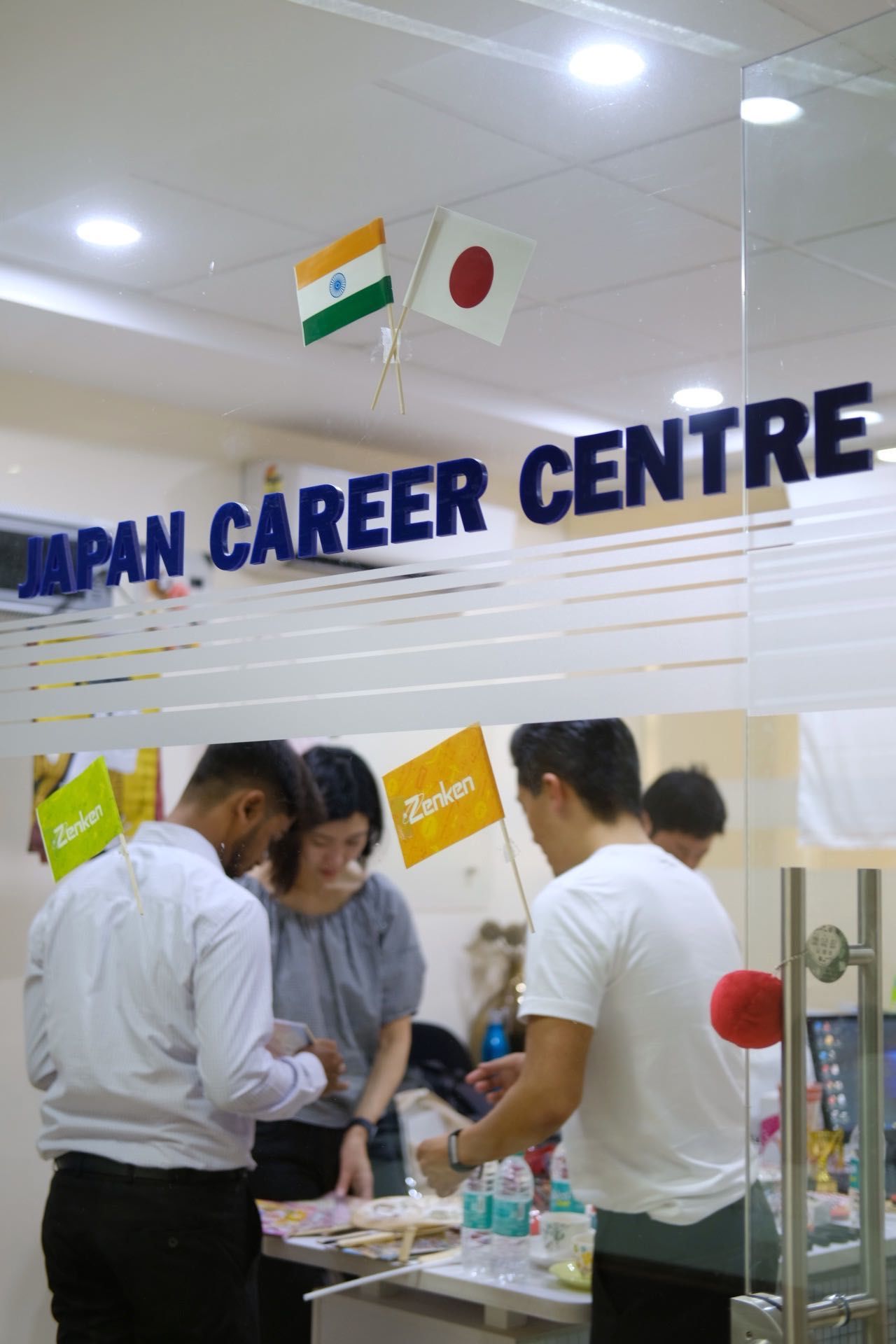 For recruitment, Zenken zeroed in on Bengaluru in the state of Karnataka in southern India. As a national center for high-tech industry, it is home to many IT companies and well-regarded engineering colleges.

Given Japan’s need for IT engineers, Japanese companies and recruiters might be expected to be hard at work signing up local talent. However, Kimura points to several reasons why this is not the case. “Most Japanese companies lack the connections needed to recruit directly,” he explains. “Those that do are typically large corporations, and they deal mainly with leading recruiting agencies in India who are keen to introduce students of the very highest ability by international standards.” Companies must offer top salaries if they expect to draw from this narrow pool, which has hampered recruitment of Indian IT engineers for small and medium-sized Japanese firms.

Kimura says that India has a deep pool of excellent IT engineers, even leaving aside the small number of elite workers, and that companies need not offer huge salaries. “We ask firms to pay Indian engineers around 3.3 million yen, which is the average for new Japanese graduates,” he says. By comparison, a recently graduated IT engineer can expect to receive the equivalent of ¥30,000 a month if they sign on with an Indian firm, making Japan an attractive choice.

A Need for Mutual Understanding

One of Zenken’s clients is IBJ, a pioneer in the matrimonial matchmaking industry. Established in 2000 in Tokyo, the firm independently developed its IT system to manage information on members and consultation offices across the country, relying on it to customize services, including its matchmaking website, reception planning business, and to provide introductions via its network of marriage consultation offices. Indian engineers play a central role in building and maintaining the system that is the beating heart of the company.

Utsumi Kana of IBJ’s HR department says that of the group’s 1,050-person workforce, around 100 are IT engineers. She explains that one of the largest appeals of hiring from India is the high ability of recruits. “Japanese universities tend to focus on the basics in terms of specific IT skills. As a result, new employees need about three years before they are real assets to the company. India, on the other hand, is second only to the United States as an IT giant and has a high standard of education, so Indian hires can be expected to contribute from day one.” 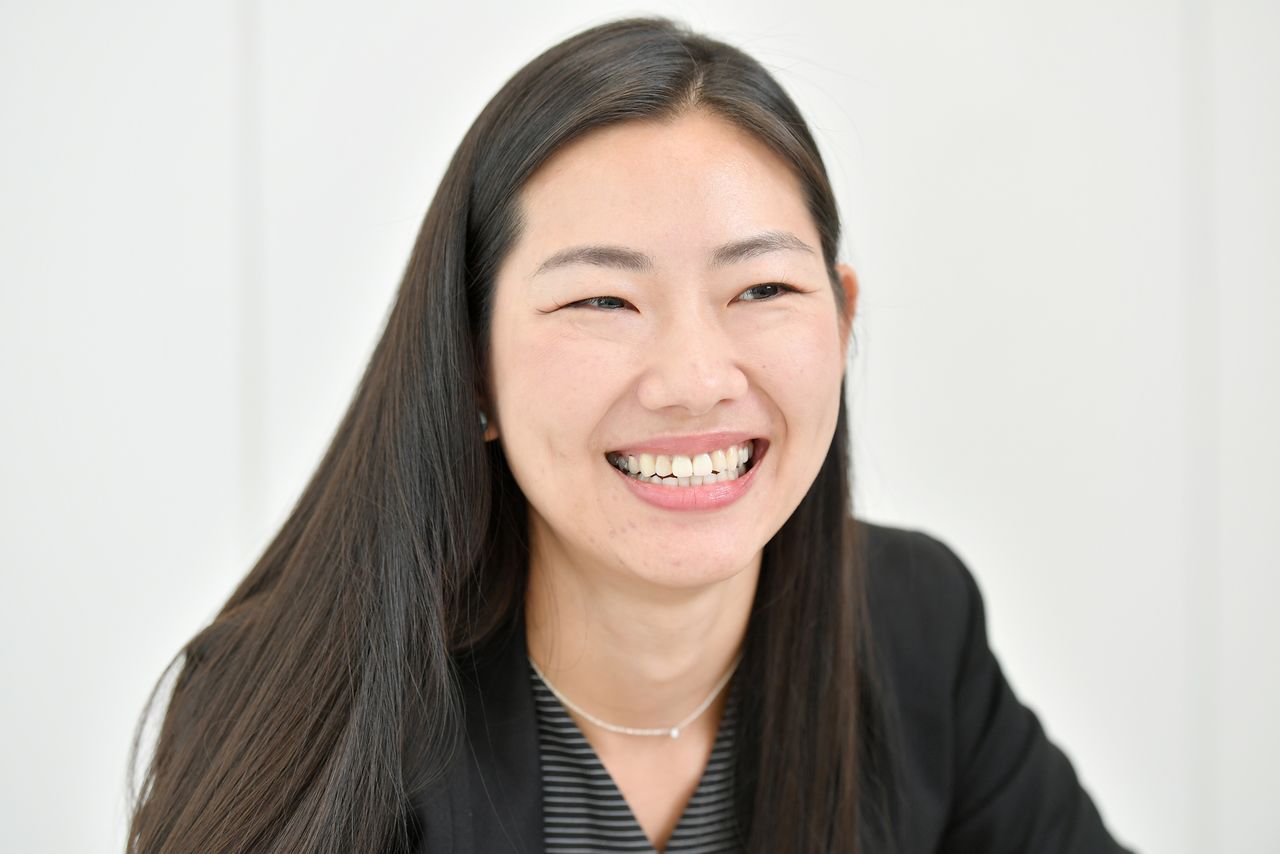 Utsumi Kana of IBJ says companies need to be willing to adjust. (Photograph by Ikazaki Shinobu)

She notes, however, that Indian employees tend to take a different approach to work than their Japanese colleague and she advises firms to be open minded and willing to adapt. “Indian workers, for instance, prefer not to spend more time in the office than is necessary,” she says. “They have a strong idea that ‘I’ve done my work for the day, so I’m going home.’ This is hard to take for many Japanese , but it’s important to acknowledge differences in thinking and work styles.” She says interactions are key for building mutual understanding, and to improve communication, Japanese employees at IBJ make every effort to talk to their Indian colleagues and create an atmosphere that encourages conversation.

To overcome language barriers, IBJ has its Indian workers set targets for learning Japanese and provides support in achieving these. “Experience greatly affects speaking and listening ability,” Utsumi says. To facilitate language acquisition, IBJ requires Japanese employees to talk to their Indian colleagues in Japanese and to use it for work-related emails and chat messages.

IBJ first decided to take on four Indian students as IT engineers in December 2018, although due to factors like Indian university graduation ceremonies taking place in May and preparations for travel, they did not actually start working in Japan until October 2019. As prospective employees, though, they were required to study Japanese at classes run by Zenken, with IBJ footing the bill. India has 22 official languages, so being multilingual is nothing unusual, and Utsumi notes that recruits quickly picked up Japanese.

In their first year, the Indian engineers received annual salaries of ¥3.3 million—the same as new Japanese hires. Utsumi says pay increases will also be in step, adding that “as well as having excellent engineering skills, they’re proactive about making suggestions. I’m hopeful that going forward we can prepare them for leadership roles at the company.”