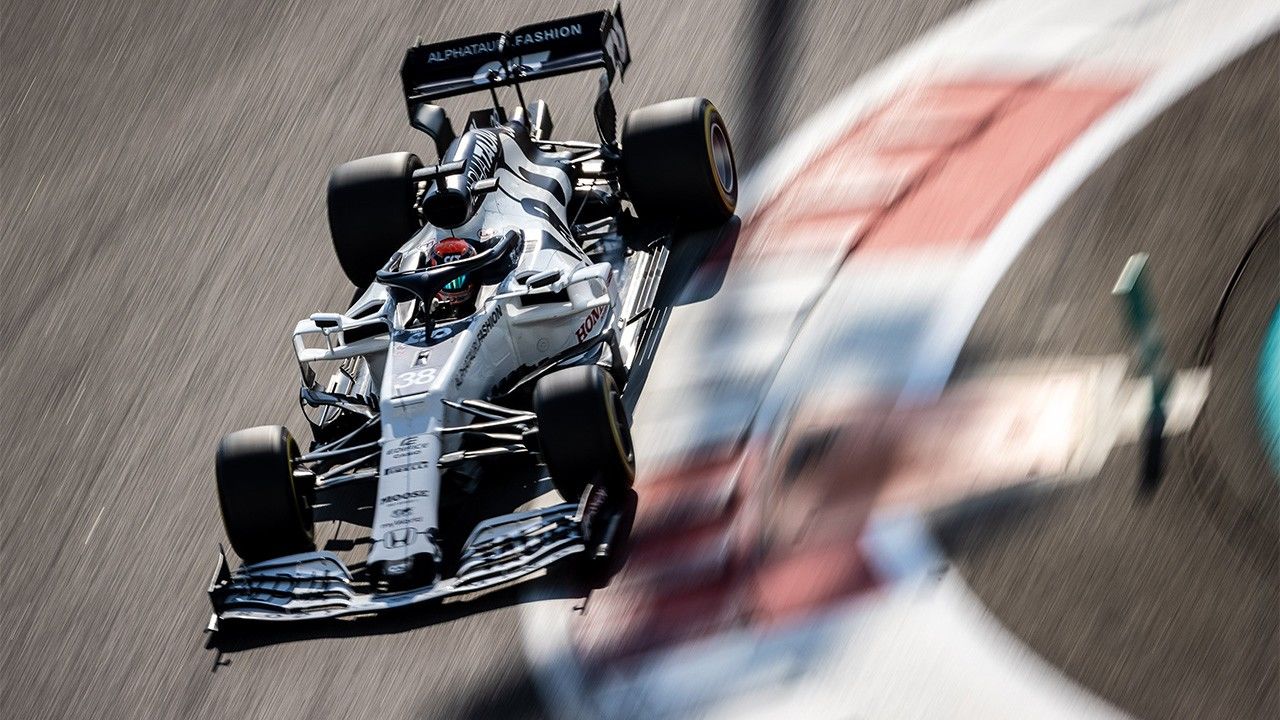 Sports Apr 27, 2021
Twenty-year-old Tsunoda Yūki, racing for AlphaTauri Honda, made his Formula One debut in March at the Bahrain Grand Prix. This article takes an inside look at a record-breaking driver with his sights set on the top spot.

A Young Racer Makes His Mark

Tsunoda Yūki might change the course of Japan’s Formula One history. This season, the driver made his Formula One debut with Faenza-based Scuderia Alphatauri Honda. The 2021 season kicked off with the Bahrain Grand Prix, which held its last race on March 28, at which Tsunoda made the first F1 appearance by a Japanese driver since Kobayashi Kamui seven years earlier. Tsunoda, finishing in ninth, was the first Japanese racer to win points in his debut competition.

The reason there is so much excitement about Tsunoda among Japanese F1 fans is the perception that he has potential that none of his predecessors did. This is partly because of his age. Competitors in every sport are getting younger and younger, and F1 is no exception. Last year’s champion Sir Lewis Hamilton (Mercedes), holder of the record for most F1 victories, competed in his first tournament at the age of just 22. Meanwhile Max Verstappen (Red Bull Honda), regarded as Hamilton’s biggest rival, began competing when he was only 17, making him the youngest F1 competitor ever.

In the past, Formula One racing tended to be the pursuit of a few wealthy young men who were lucky enough to be given a spot in the driver’s seat. These days F1 is big business, though, and many major auto manufacturers train their own teams of drivers from which the best are selected to compete. This approach has further accelerated the trend to younger drivers. 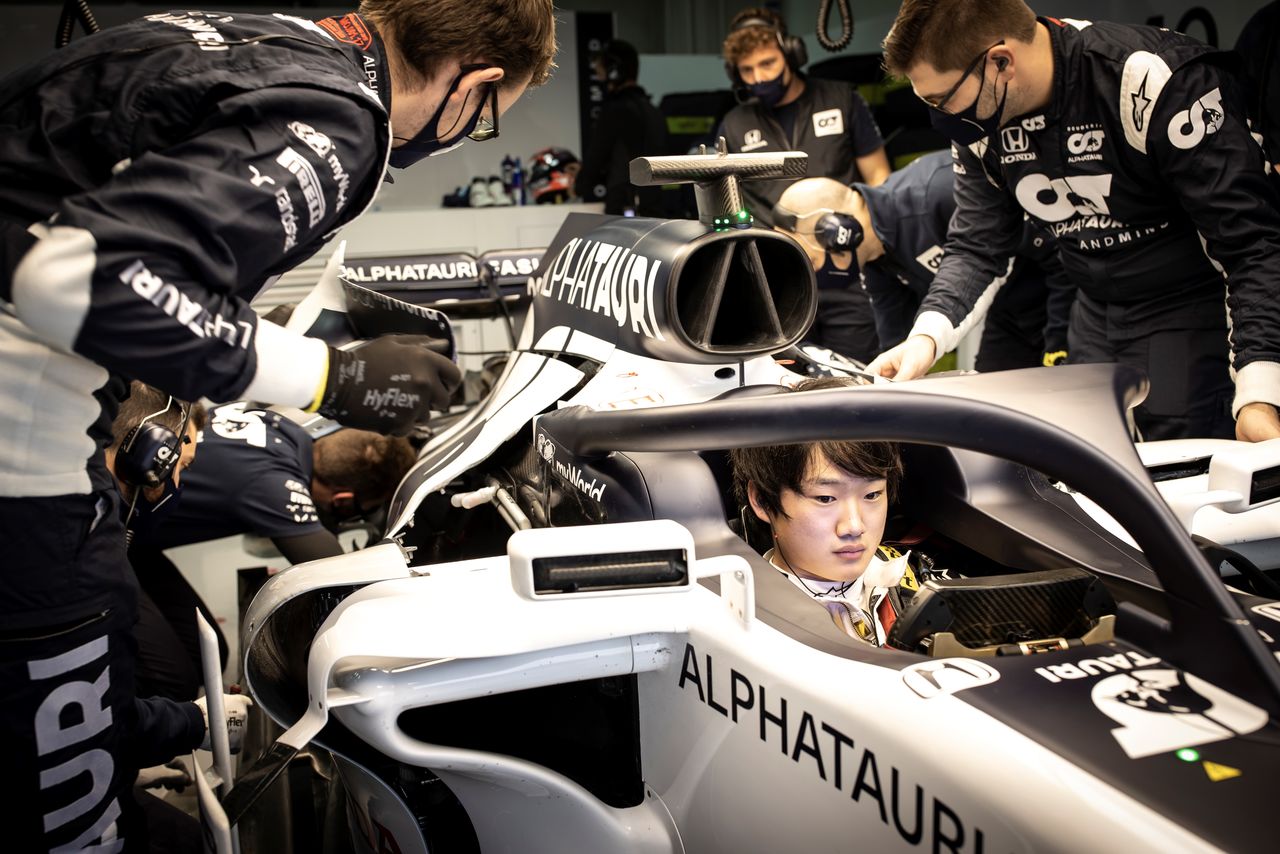 Tsunoda prepares for his first test run in a Formula One car during the 2020 offseason on Italy’s Imola Circuit.

Skills Endorsed by a Top Team

Tsunoda, who was the youngest Japanese national ever to compete in a Formula One race when he was just 20, was one of those racers given the chance to compete.

“When I began riding go-karts at the age of four, I always wanted to go faster,” he says. “Back then, however, all I could think about was getting to the next step. Formula One was a world away.”

It was Honda, which at that point had 30 Formula One seasons under its belt, that recognized Tsunoda’s potential and trained the then Suzuka Circuit Racing School graduate into a driver able to take on the world.

Tsunoda’s next big chance came from Red Bull, a company that has been involved in Formula One since 2005. In 2019, Tsunoda joined the Red Bull Junior Team and moved to Europe. With greater expectations also came greater scrutiny, however.

“Red Bull juniors receive generous financial support, but at the same time, if you don’t perform, you are kicked out of the program straight away,” says Tsunoda.

In a world in which the only thing that matters is your performance on the track, Tsunoda survived, qualifying in 2020 for the Fédération Internationale de l’Automobile F2 Championship, the precursor to Formula One competition. Despite still being a rookie, Tsunoda achieved pole position four times and won three of his races. Coming in third overall and vindicating the faith placed in him by Honda and Red Bull, Tsunoda at last made it behind the wheel of an F1 car.

Coming in third in an F2 championship was an unprecedented achievement for a Japanese driver, as was Tsunoda’s performance in the GP2 feeder series and the International Formula 3000 series that came before it. But the young driver achieved this feat in his first year of competition, giving him a reputation as a performer.

Last year, Tsunoda was named FIA Rookie of the Year, an honor awarded to the overall best driver in any category, including F1. He was the first ever Japanese national to win this award.

Tsunoda’s greatest weapon as a driver has been his superior ability to react to his car and his environment. These qualities are a major advantage in F1 competition as well.

The Formula One category is unique in the way that new racecars are released every year in accordance with the changing regulations. What’s more, the machines themselves evolve during the tournament, as spoilers and suspensions are swapped out after each race. At the root of Tsunoda’s ability to keep pace with this process of evolution lies an aspiration to keep honing his abilities. 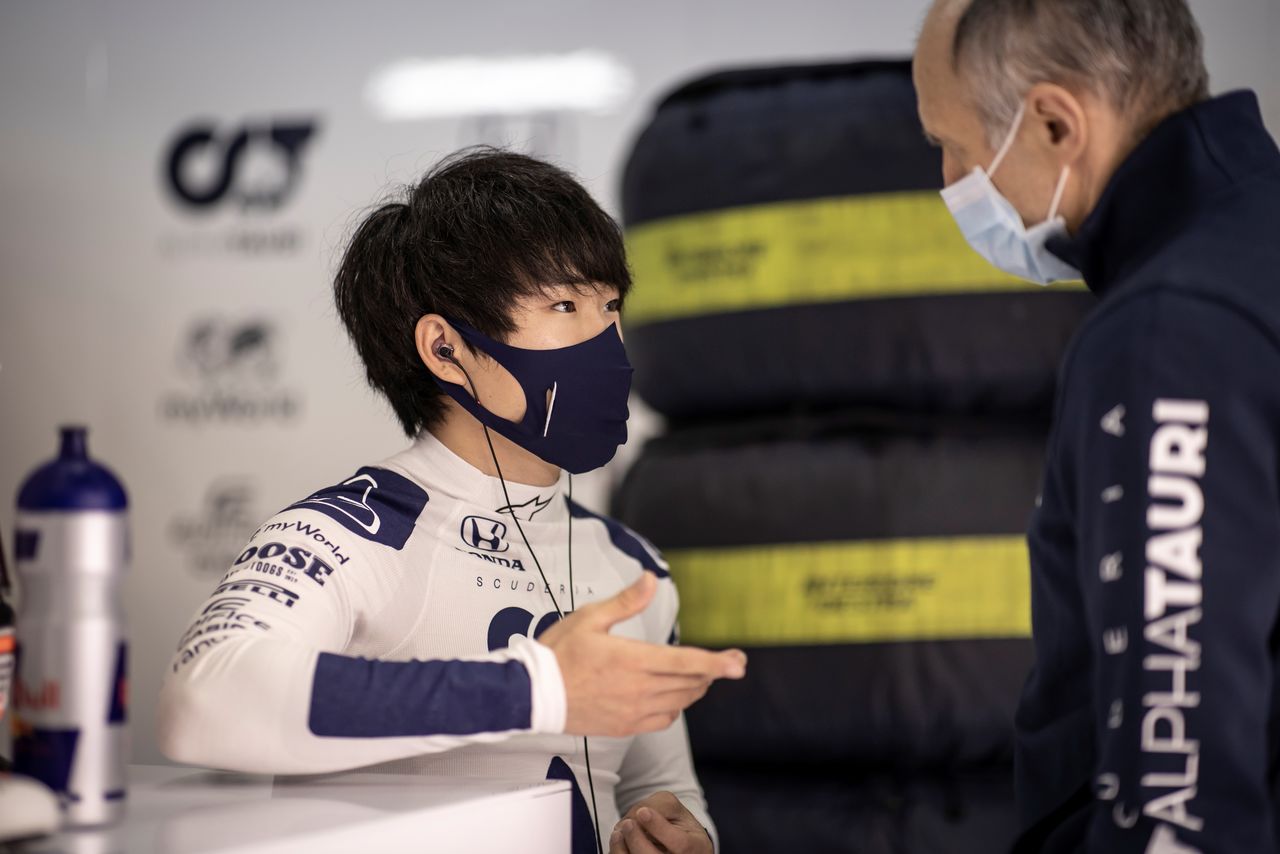 Tsunoda has now lived overseas for over two years and is able to communicate comfortably with race engineers.

Ask anyone who works for the Mercedes team about current world champion Lewis Hamilton, and they will say that no one matches him when it comes to putting in effort in areas that go unseen. But the same can be said of Tsunoda, too.

Yamamoto Masashi, Managing Director of Honda’s F1 program and an avid watcher of Tsunoda’s career, has continued to monitor Tsunoda’s efforts off the track.

“After every race, he reflects on what went well and what didn’t go well, and takes those lessons into the next race. I got a real sense that grows every race—not only as a driver, but also as a person,” says Yamamoto.

The highest placing ever achieved by a Japanese driver in a Formula One race is third: Suzuki Aguri in 1990, Satō Takuma in 2004, and Kobayashi Kamui in 2012 all had their moment on the podium. Meanwhile, the best overall ranking for a season was eighth, achieved by Satō in 2004. Of course, Tsunoda is aiming much higher than this.

“If I’m still driving in Formula One races in 2030, it will mean that I’ve shown what I’m capable of in F1 and have won several tournaments. Personally, I want to keep driving until around 2035. Last year Lewis Hamilton won his seventh title, which places him on a par with Michael Schumacher. I’d like to beat that record,” says Tsunoda. 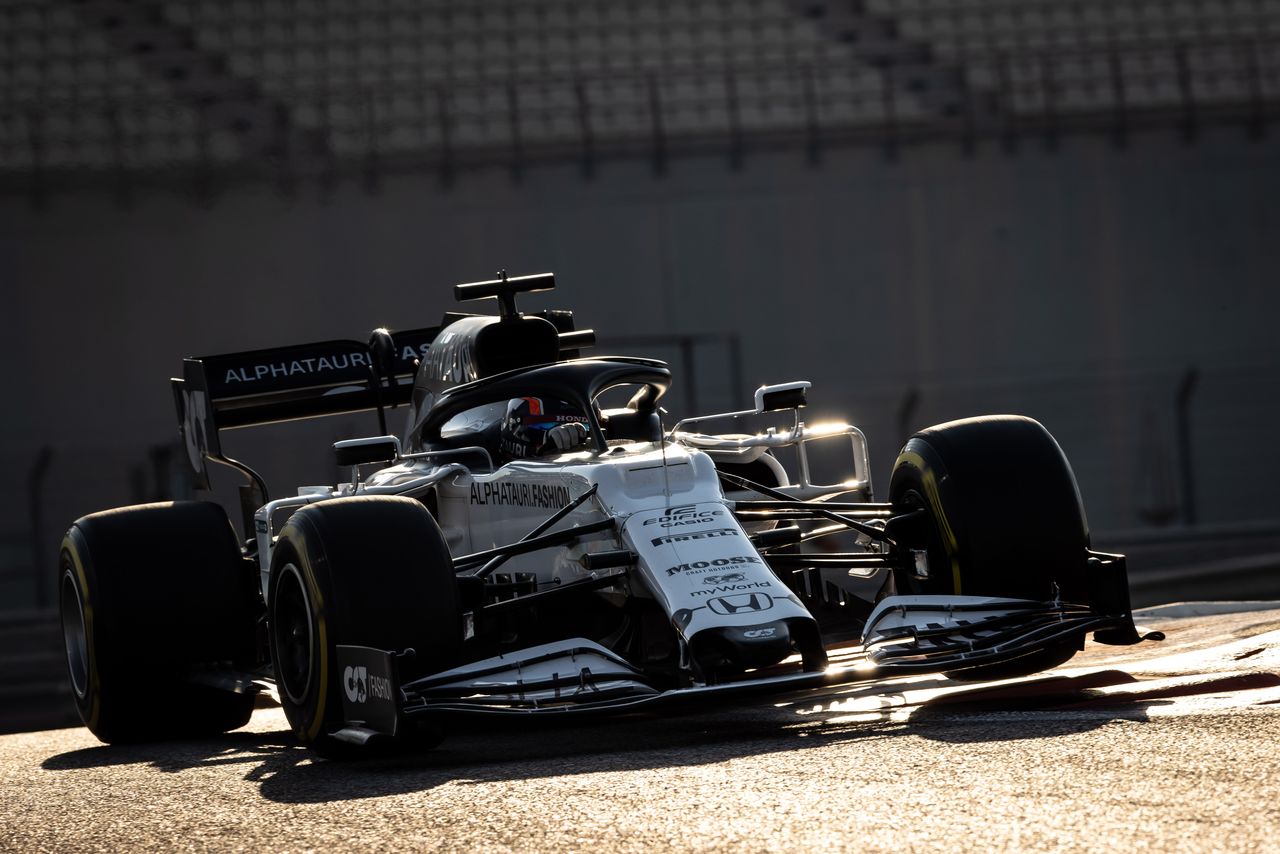 Tsunoda performed impressively in his second Formula One test run in Abu Dhabi.

Honda takes a special interest in Tsunoda’s career because 2021 is the automaker’s last year contesting Formula One. Tsunoda is only too aware of the huge expectations that are riding on him.

“For me, driving in Formula One means carrying the hopes of all the fans who support me in Japan. I am going to give my all to making those dreams a reality,” he says. 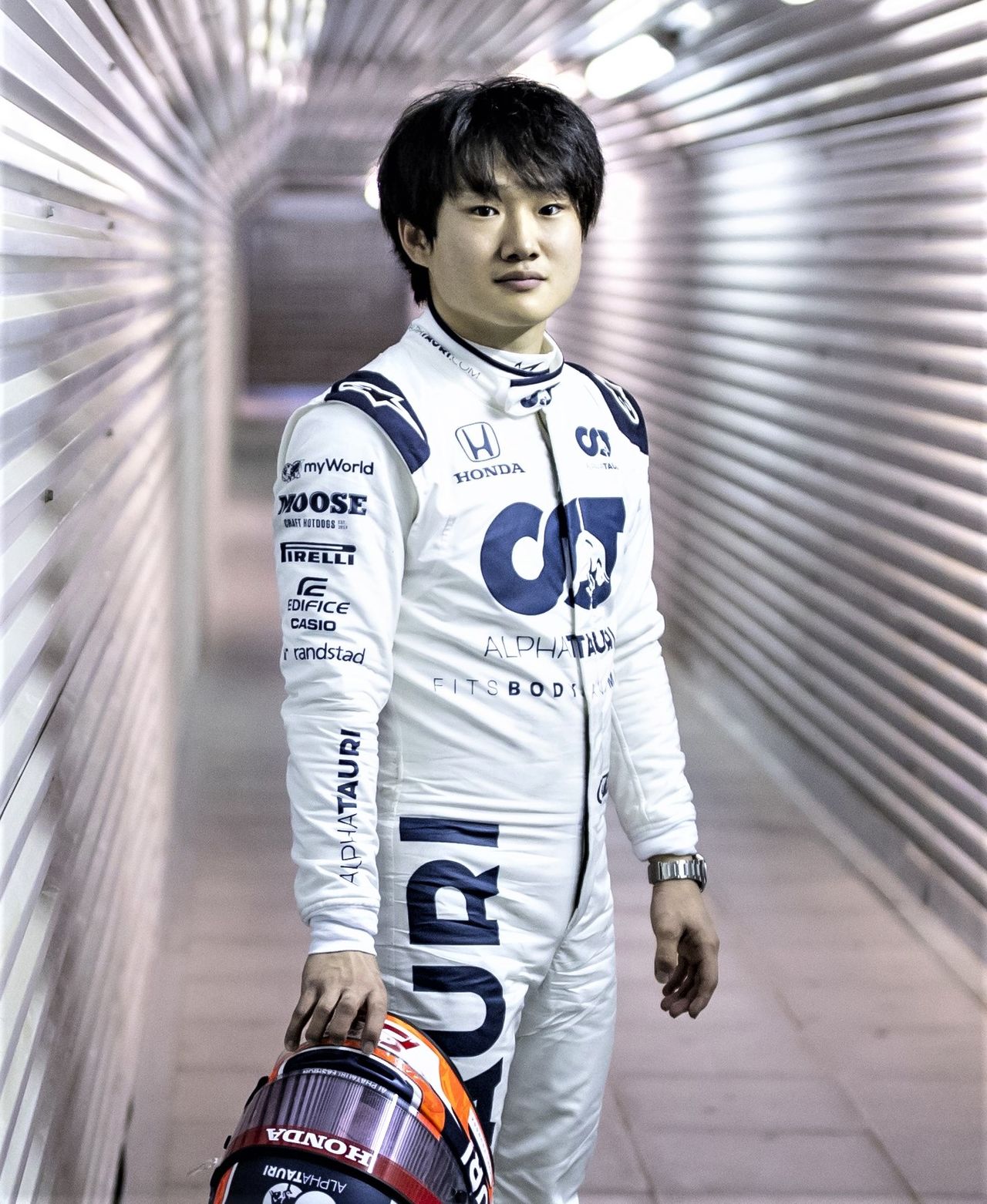 Born in Kanagawa in 2000. Influenced by his father, who raced in gymkhana competitions, Tsunoda began go-kart racing at the age of four. He enrolled in the Suzuka Circuit Racing School in 2016 and went on to compete in the FIA-F4 Championship in 2017, becoming series champion in 2018. In 2019, Tsunoda joined the Red Bull Junior Team and started competing in F3 tournaments in Europe. In 2020, he competed in his first FIA-F2 Championship, coming in third overall. In 2021, Tsunoda made his Formula One debut with AlphaTauri Honda.