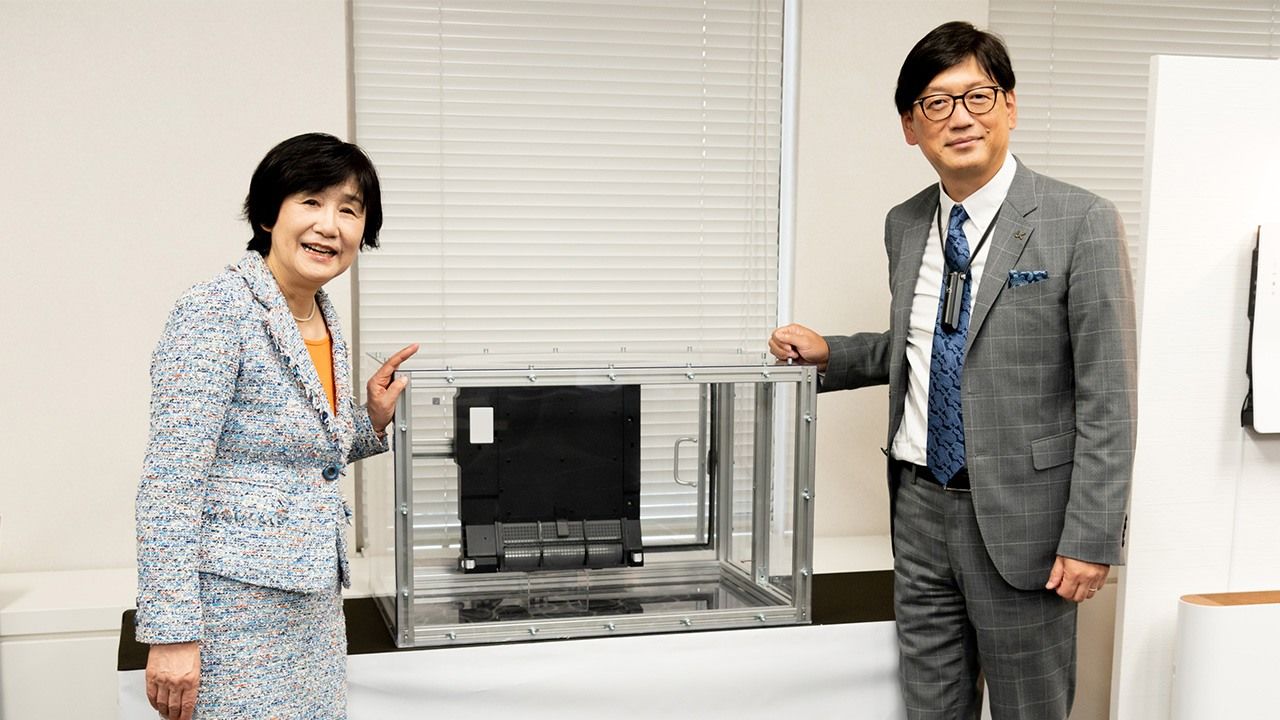 Science Economy Health Work Technology May 12, 2021
In October 2020, the Osaka-based venture capital firm Kaltech successfully trialed its unique LED disinfection device to eliminate the COVID-19 virus. In tests conducted with the Nihon University School of Medicine and the research institution Riken, this approach eliminated 99.9% of the virus in 20 minutes. Can Kaltech’s success suggest a new path for Japanese manufacturers?

The current COVID-19 pandemic has thrown a spotlight on a discovery made by Japanese researchers half a century ago: photocatalyst technology.

Photocatalysts are materials that induce a chemical reaction under photoirradiation. Titanium dioxide, the most widely known, causes strong oxidation when exposed to light. Photocatalyst technology leverages this phenomenon to decompose harmful or odor-causing substances into materials like water or carbon dioxide.

Fujishima Akira, the former president of the Tokyo University of Science, was studying for his PhD at the University of Tokyo when he made this discovery. In 1972, after finding that titanium dioxide oxidizes in water when exposed to strong light, Fujishima published a paper on the photocatalytic reaction in the influential British scientific journal Nature.

Since then, photocatalytic technology has been applied in self-cleaning operations, for home and office building walls and roofs. Titanium dioxide is used for cleaning of the exterior of Marunouchi Building, a skyscraper built adjacent to Tokyo Station in 2002; and for the enormous white GranRoof, added to Tokyo Station’s Yaesu Exit in 2013.

In mid-October 2020, Osaka-based venture capital firm Kaltech caused a stir with its announcment that the photocatalyst used in the its disinfection and deodorization device was successful in rendering COVID-19 inactive. Kaltech described tests conducted with Nihon University School of Medicine and research institution Riken, where the device was placed in a 120-liter tank containing droplets including COVID-19. Within 20 minutes, 99.9% of the COVID-19 virus was rendered inactive. 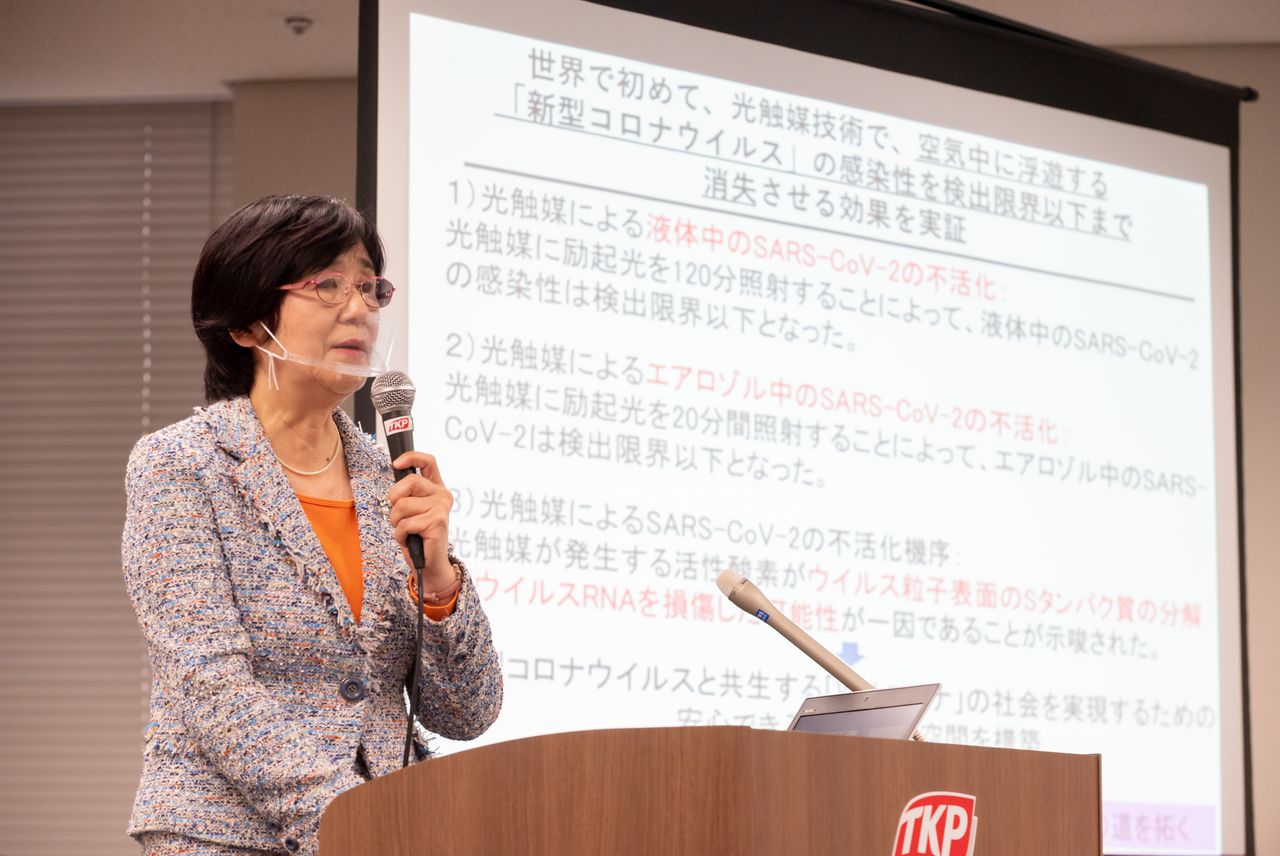 The findings were surprising for two reasons.

Firstly, although the tests were conducted in airtight conditions, unlike environments where their disinfection and deodorization device would typically be used, it did demonstrate the potential for photocatalytic technology to inhibit COVID-19.

The other surprise was that the company behind the success was a relatively young start-up. Kaltech was launched in April 2018 by its president, Somei Jun’ichi, formerly an engineer at Sharp, and colleagues from the same company.

What led him to leave a major firm like Sharp to develop the potential of photocatalysts from scratch? Why choose a start-up over a big corporation?

In the press conference, Somei described barriers faced by large firms and the role which start-ups can play, explaining his belief that start-ups are the key to Japan’s revival.

A Shocking Experience in Sri Lanka

Somei first conceived of commercializing photocatalytic technology around 10 years ago, after working at Sharp for 25 years. He had known of photocatalysts, and adored them, since technical college. Even after he graduated college and joined Sharp, he retained a keen interest. Nevertheless, he threw himself into the work he was assigned—television tuner development and the LED business. “But photocatalysts stayed in my heart, like a secret infatuation.”

He was transferred to Sharp’s B2B Promotion Center (later the B2B Business Division), responsible for developing new business. This was a turning point in his career. As team leader, Somei was expected to propose new avenues for business. He suggested the commercialization of environment purification products using photocatalysts—a technology that was advancing rapidly. He was certain that the technology was ripe for the market.

One influence was the time he had spent in Sri Lanka, where Sharp was cooperating with the Japan International Cooperation Agency on a project assisting farmers by supplying LED lights that repel insects. Somei, who was responsible for the light’s design, was sent to monitor the situation. He was shocked to witness serious health problems caused by government-supplied agrochemicals used by farmers to boost productivity. Many, including children, were dying from chronic kidney disease.

He wondered if photocatalysts could be used to purify water that had been polluted by agrochemicals, thereby saving the lives of children. After this visit, Somei grew more conscious of the potential for photocatalysts to not only clean buildings, but to save lives.

But Somei’s proposals were repeatedly knocked back. Sharp produces a range of air purifiers, air conditioners, and ion discharge devices under the Plasmacluster brand. The products discharge hydrogen ions and negative oxygen ions using proprietary air purification technology. Forces within the company, particularly in sales, worked to prevent interference in this business field.

“My proposals were constantly shot down. Even if management was interested in my ideas, they were trampled by sales and product design before reaching fruition. To a degree, I could understand their stance. When I demonstrated the exceptional potential of photocatalysts, they inevitably asked if they were superior to Plasmacluster. It was only natural that the sales and product design divisions would harbor concerns. I suggested that photocatalytic technology be used in the background for disinfection and deodorization, but this was also rejected.”

Somei continued making such proposals for two years, but none were realized.

“It was then that I thought about leaving. If I could not have the technology commercialized by Sharp, I should launch my own business. I stayed for another two years before making my final decision. My doubts vanished once I resolved to start my own company.”

A Brave Decision at 56

At the time, Sharp was struggling to adapt to changes in its business environment. Fierce competition in its key markets of LCD televisions and flat panels eroded the company’s profitability. Its excessive reliance on and investment in these fields became an impediment, and the company suffered huge losses. Taiwan’s Hon Hai Precision Industry (Foxconn) bought Sharp, and the company’s B2B Business Division was disbanded.

Somei left Sharp in March 2018, at the age of 56, launching Kaltech the following month with seven other former Sharp employees.

At first, their work with photocatalysts hit roadblocks, thwarting plans to employ the technology. But in December 2019, the company launched its first product: a wall-mounted air purifier. The following October, it released a portable model, with a neck-strap. Both relied on the company’s proprietary photocatalytic technology. Sales boomed, and the current sales forecast for the year to September 2021 is ¥10 billion. In the future, Somei hopes to expand photocatalytic technology to water purification. 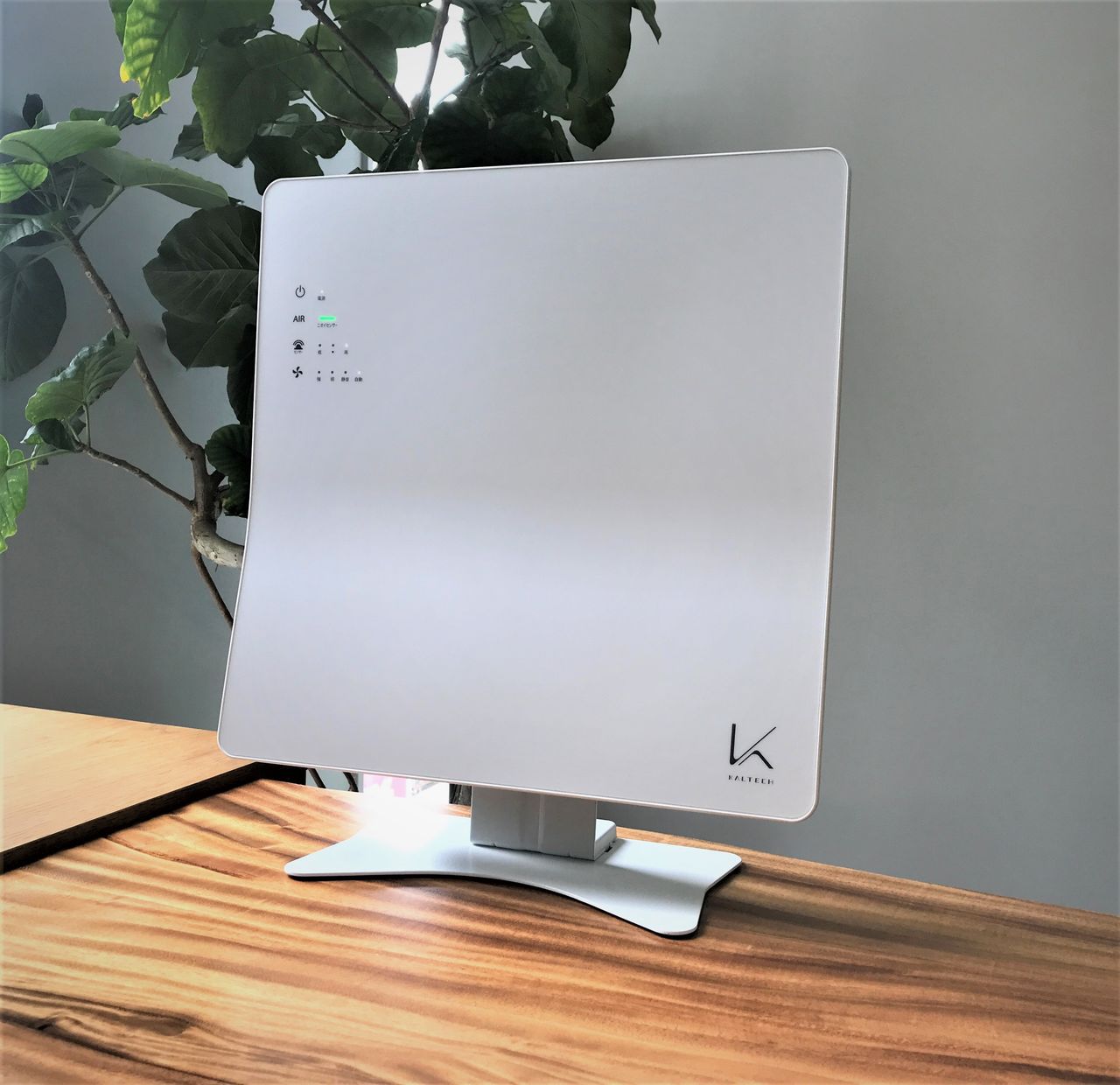 Still, the question remains—why choose a start-up over a big company?

Somei’s experience suggests that Japan’s biggest firms suffer from increasing inflexibility, and are losing their dynamism—their approach to business is neither progressive nor enterprising.

Due to Sharp’s corporate structure, Somei’s proposals were seen as a threat to existing business. This gives an insight into the sorry state of big corporations, where the interests of specific divisions are prioritized over the whole, impeding the company’s overall growth.

Overall Optimization is the Key

Issues with his former employer’s top management at the time cannot be overlooked. The fact that the sales team saw photocatalytic technology as a threat was their admission of its potential. If upper management had objectively weighed the risks of internal competition against the potential for long-term growth, perhaps the outcome would have been different.

It is managers’ responsibility to dismantle internal barriers. If they cannot, the firm will go into decline. Existing business areas all eventually reach maturity, and constantly face price competition that threatens profitability.

These problems are common among big Japanese corporations. Many promising business proposals never see the light of day due to internal power struggles. Many employees with great ideas are stuck in suffocating positions, simply performing their assigned tasks. Entrepreneurship in Japan is hindered by the corporate environment, which erects barriers to procurement of human and financial resources, and cultivation of partnerships.

Entrepreneurs like Somei, meanwhile, are in the minority. Few have been able to muster the courage to gather like-minded people to follow their dreams and achieve success.

Japanese corporations need to regain their dynamism, while the country also needs to reduce barriers to entrepreneurship. This would generate the rivalry needed for Japan’s corporate restoration, as suggested by the rapid success of Kaltech.