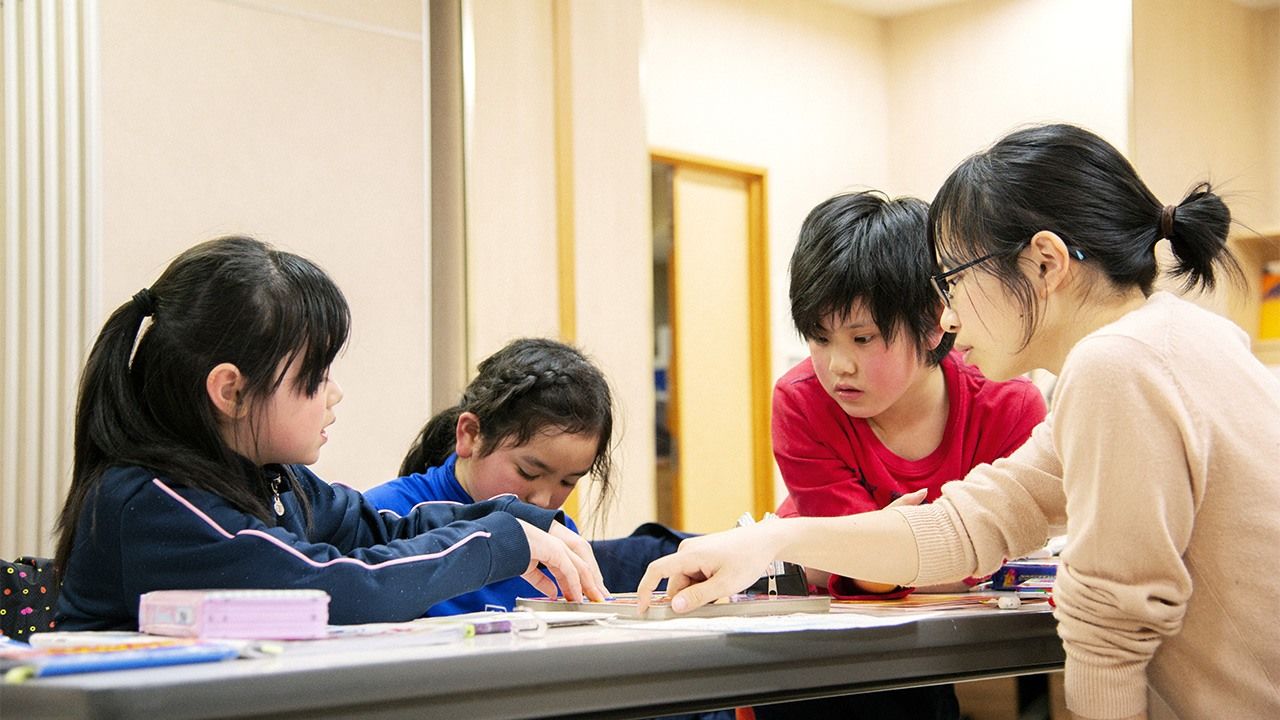 Society May 11, 2021
Ainu people still struggle against racial discrimination and socioeconomic disparity. After generations of marginalization, Ashizawa Mitsuru of the Ainu group Etekekampa Association says that Japanese society is finally starting to change.

Arata Yūki started attending the Tokachi Etekekampa Association, a private tutoring school for Ainu students in the Hokkaidō city of Obihiro, because his older brother was going there. Known affectionately as Eteke, the school was established in 1990 to provide local Ainu youth a place to learn and interact. “We used to catch rides with Asshii,” recalls Arata, referring to Ashizawa Mitsuru, a founding member and current head of the organization.

Eteke alumni Sakai Manabu has similar fond memories of Ashizawa. “I am who I am today thanks to Asshii,” he declares. “I even stayed at his house for tutoring. He cared about me more than my school teachers did. He understood what I was going through.”

Manabu’s wife Sakai Mari, also a former Eteke student, remembers getting in trouble with Ashizawa for neglecting her schoolwork. “I went to Eteke just to play,” she recounts, “but Asshii got after me to study. I was annoyed at the time, but now that I’m older, I’m grateful he did.” 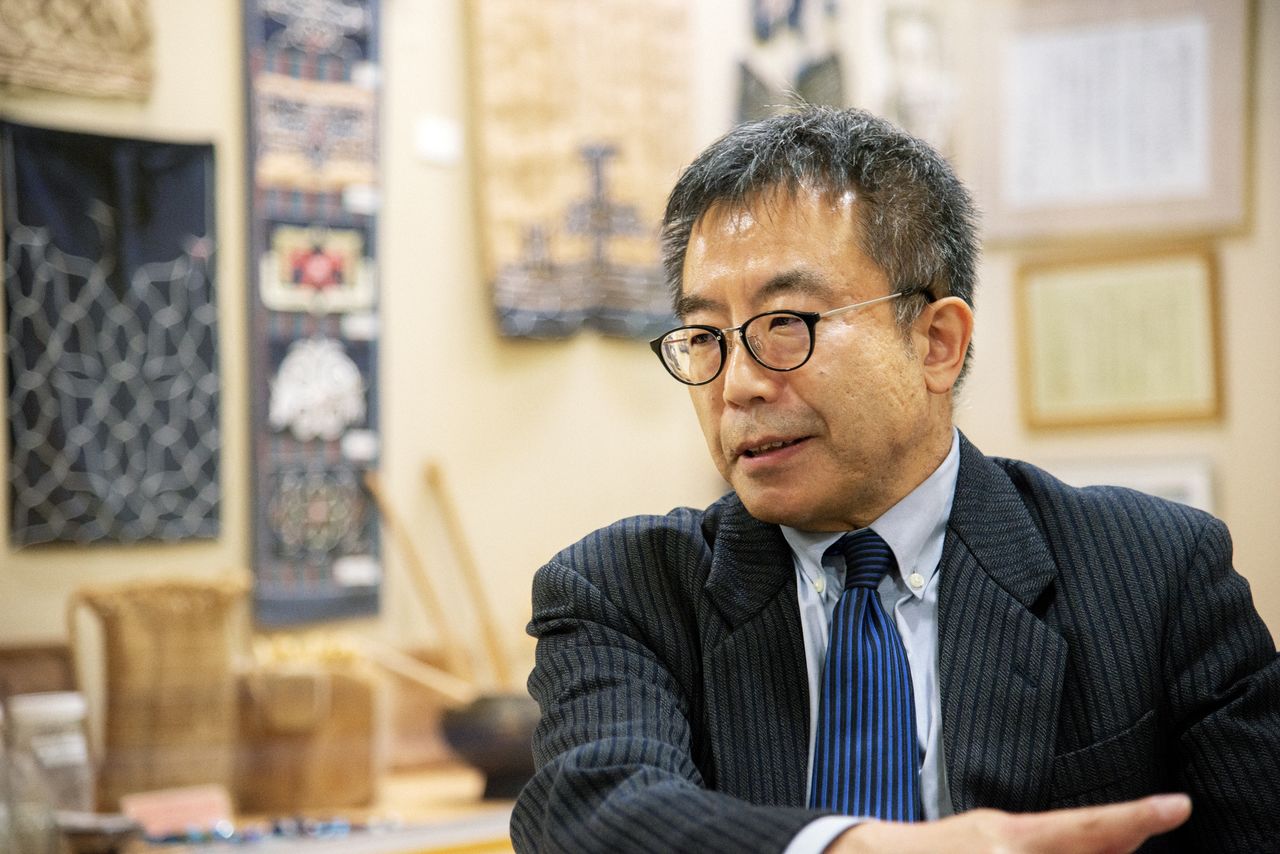 Ashizawa grew up in Nayoro in northern Hokkaidō. As a high school student, he was moved by the heart wrenching images of starvation coming out of Africa, the result of a humanitarian crisis in countries like Ethiopia. Inspired by the efforts of high-profile charity groups Band Aid and USA for Africa, he dreamed of providing agricultural support to alleviate the suffering of people in affected areas.

In 1987, two years into his studies at Obihiro University of Agriculture and Veterinary Medicine, he attended an agricultural symposium in Sapporo with other participants from around Hokkaidō. It was there that he saw a presentation by an elderly Ainu women that changed the course of his life. “She covered a range of topics,” recalls Ashizawa. “What I remember most, though, is that she ended her talk by stating, ‘Japanese people, get out of Hokkaidō!’ Not being Ainu, I was outraged.”

The following summer, Ashizawa traveled to Canada, taking various farm jobs and working at a research center of Christian organization to support himself. He then travelled to the United States, staying until his savings ran out. He says that during this period he gave little thought to the Ainu woman’s words, but that finding himself alone in New York around Christmas time, they came back to him like a thunderclap. “It occurred to me for the first time that by virtue of having been born in Hokkaidō, I might be complicit in the oppression of the Ainu,” he explains. “The idea tormented me to the point that I lost the will to live. The woman’s words had cut deeper than I realized.”

In 1989, he had a chance encounter with two Japanese exchange students in Minnesota. Their conversation turned to the movie Cry Freedom, set in South Africa during Apartheid. He recounts how one of the students argued that black South African should accept white residents of the country. “The words struck me like a hammer. I felt that if I had the acceptance of the Ainu, I could return to Hokkaidō with peace of mind. Later, I learned that the woman was herself Ainu.”

After returning to Japan, Ashizawa was approached by a teacher at a private high school in Obihiro to tutor two Ainu students attending the institution. It was through his involvement with the students that he met Kimura Masae, who at the time helped arrange financial support for single-parent Ainu families. Together, the unlikely pair—Kimura was 41 and Ashizawa a 24-year-old college student—would help found Eteke. 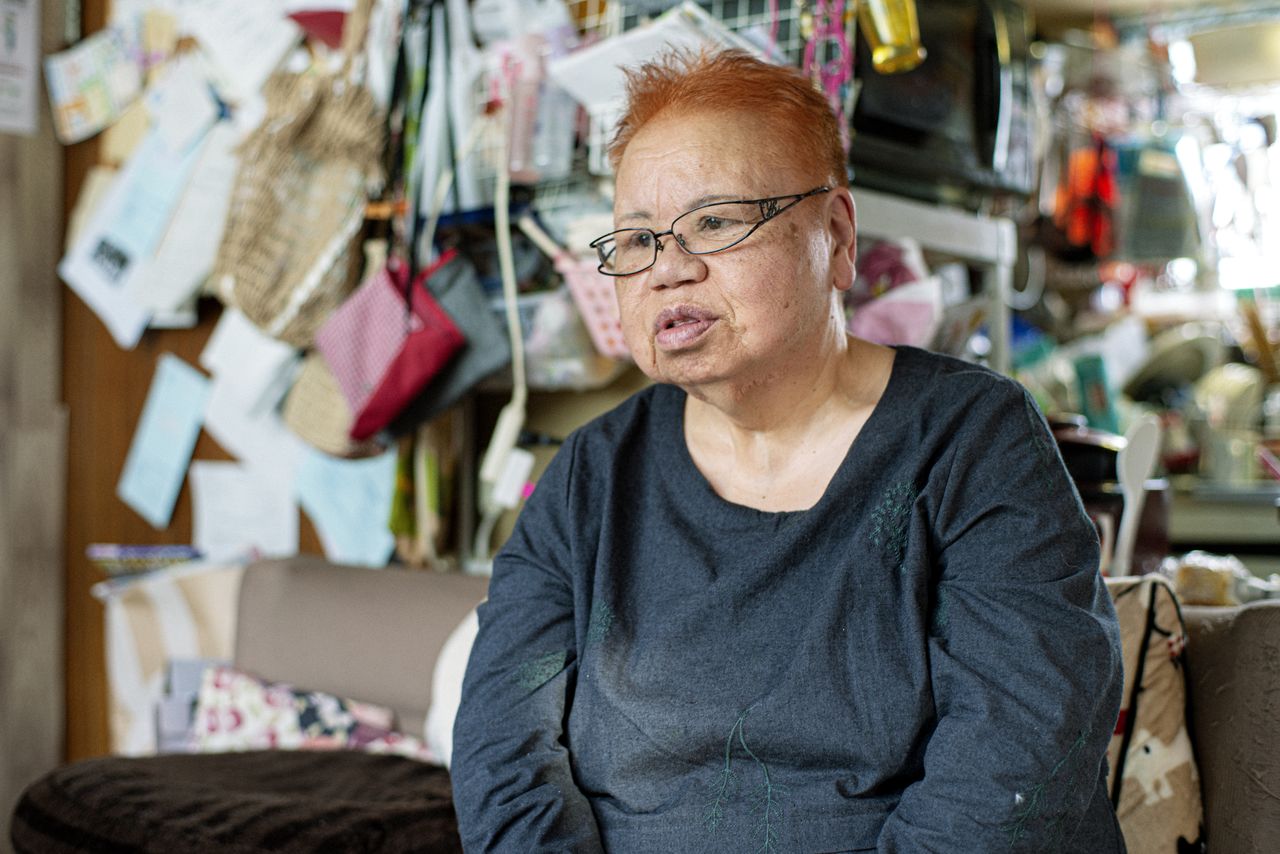 Cases of discrimination against Ainu were common at local schools and Kimura and Ashizawa were kept busy dealing with incidents. Kimura recalls confronting the homeroom teacher of a girl who stopped attending class because she was being bullied. “We came right out and asked if the teacher thought it acceptable that the girl couldn’t attend school just because she was Ainu, but I didn’t get a straight answer.” Infuriated by the instructor’s reticence, she pushed harder. “I told the teacher that it was obvious they didn’t care about the girl’s plight or they would have taken action instead of encouraging the bullies by doing nothing.” Faced with Kimura’s indignation, the teacher burst into tears.

As a university student, Ashizawa often visited the homes and schools of Ainu children. Although he held on to his dream of working abroad, these encounters were unknowingly pointing him down a different path. In 1991, a university mentor helped him land a teaching position at a private high school in Obihiro. Even with his new duties, though, Ashizawa continued his work at Eteke, including occasionally excusing himself during school hours to handle unexpected trouble.

He remembers one time arriving at a school to find a bullied Ainu child staring dejectedly at the ground. “Someone had written ‘Die, Ainu!’ on the blackboard,” he explains. It was a disturbingly common occurrence. “We’d found the same words scrawled in a park near where I lived.” Although deeply troubled by the incident, Ashizawa could also relate to the difficulties teachers faced in the classroom. “Teachers often expressed to me their uncertainty about the best approach to take with Ainu students.”

Early on, Ashizawa says that many mothers insisted Eteke not teach their children Ainu-related content. Surprised by this, he bided his time. “I was convinced that Ainu children foremost needed a solid education,” he says. “This would enable them to appreciate their heritage and stand up to bullying and ostracism. From there, they could continue to high school and even university. I wanted to provide them a solid education that would open new opportunities, help them find happiness, and fulfill their birthright.”

Connecting with other Indigenous People

Later, at Ashizawa’s insistence, Eteke expand its activities. The school organized overseas trips for Ainu children to meet other Indigenous people. Groups traveled to Canada in 1995, 1998, and 2001, and to Taiwan in 2010.

Arata Yūki participated in the third trip to Canada, an experience he says made a huge impact on him. “I made friends with a boy my age who belonged to the Heiltsuk nation,” he recounts. “We had a lot in common, including bad experiences at school.” When the different groups performed traditional dances for each other, Arata was impressed by his new friend’s enthusiasm. “He performed barechested and cried out as he danced. I belonged to a well-known Ainu cultural preservation society, but had mainly come along for fun. Seeing him made me question my attitude.” After the trip, he says he started taking his participation more seriously.

Ashizawa says the impact the trips had on his charges exceeded his expectations. “Everyone said they felt a connection through being indigenous. That’s something I couldn’t relate to as I’m not Ainu, but it was enough to see the children through their sharing develop an awareness as Indigenous people.

Sakai Manabu and his wife Mari also visited Canada with Eteke. Their twin sons have attended the school since they were first graders. Now that the boys are in high school, the couple hopes their sons will also visit Canada and have the same unforgettable experiences.

Changes Locally and Across Society

Thirty years have passed since the founding of Eteke. Many of the students who have attended over the years lived at the local public housing complex, the Ōzora apartments. However, resident numbers are on the decline at the complex and others like it around the city, which has affected enrollment. Some 30 children attended Eteke at its peak, but due to Japan’s declining birthrate and other factors, there are currently only around 10 students, ranging in age from elementary to high school. All of them attend school regularly, a boast that was almost impossible to make in the past.

“Society has changed,” reflects Ashizawa. “Every year I see Ainu children enrolling in school and proudly declaring their Ainu heritage. This never would’ve happened in the old days.”

Students at Eteke. The group meets every Thursday, with regular events for children and their families, including camps, sports days, and excursions.

In 1997, Japan replaced the Former Aborigines Protection Act, an antiquated piece of legislation dating from 1899, with the Act on the Promotion of Ainu Culture. Ashizawa believes the law greatly impacted education. “After the law passed, elementary schools in Hokkaidō started including Ainu cultural content in curriculums,” he says. “Ainu people are invited to give talks to students, and some elementary schools have children perform traditional dances at their arts festivals. Teachers who once struggled to include Ainu-related content now have more options.”

Ashizawa is enthusiastic about the changes he sees in the community. “It’s hard to believe, but even the mothers who once forbade me from teaching their children indigenous culture now attend Ainu embroidery classes at the community center.”

In October 2020, the Foundation for Ainu Culture in recognition of Eteke’s history of providing educational support presented the group with the Ainu Cultural Promotion Award. Ashizawa does not attempt to hide his emotions. “Even now, I feel gratitude and joy each Thursday when I see the children,” he proclaims. “Coming together invigorates the students and teachers. The bonds are close.”

The struggles and efforts of people over the years to address the discrimination Ainu face has brought gradual yet clear social change. Still, there is more that needs to be done. A stark reminder of this occurred in March of this year when a morning news program aired a racial slur against Ainu people on national television. The broadcast sparked a slew of posts on social media rife with bigoted comments, abusive language, and misinformation.

When I visited Eteke, children shared their thoughts and dreams with me during break time. I was moved by the innocence of their aspirations, such as working at McDonald’s, practicing badminton, and playing tag with their classmates. I wonder how we can ensure the happiness of these children. Bigotry is not something for victims to resolve alone—it must also be dealt with on the side of perpetrators. All of us should lend a hand. 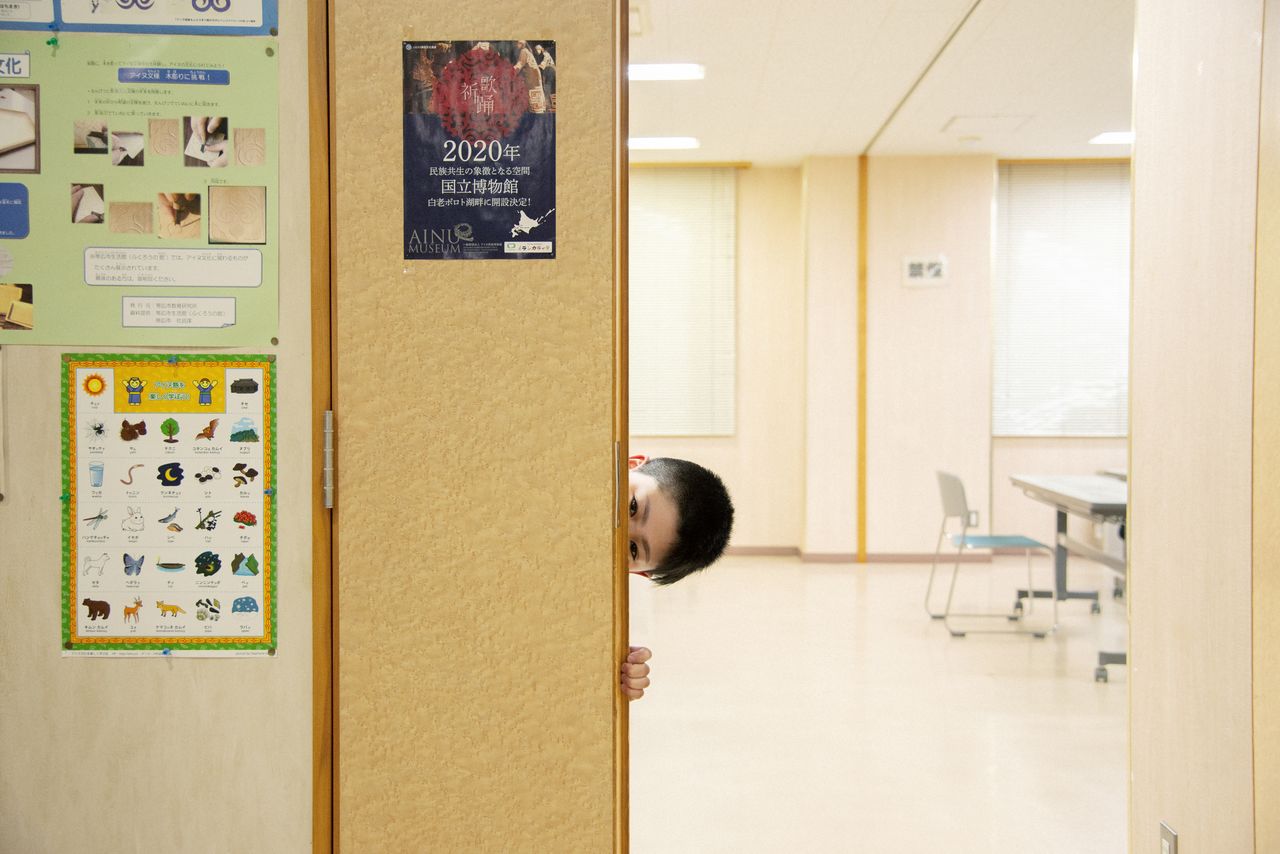 (Originally published in Japanese. Banner photo: A student from Obihiro University of Agriculture and Veterinary Medicine tutor children at the Etekekampa Association. All photos by Ikeda Hiroshi.)