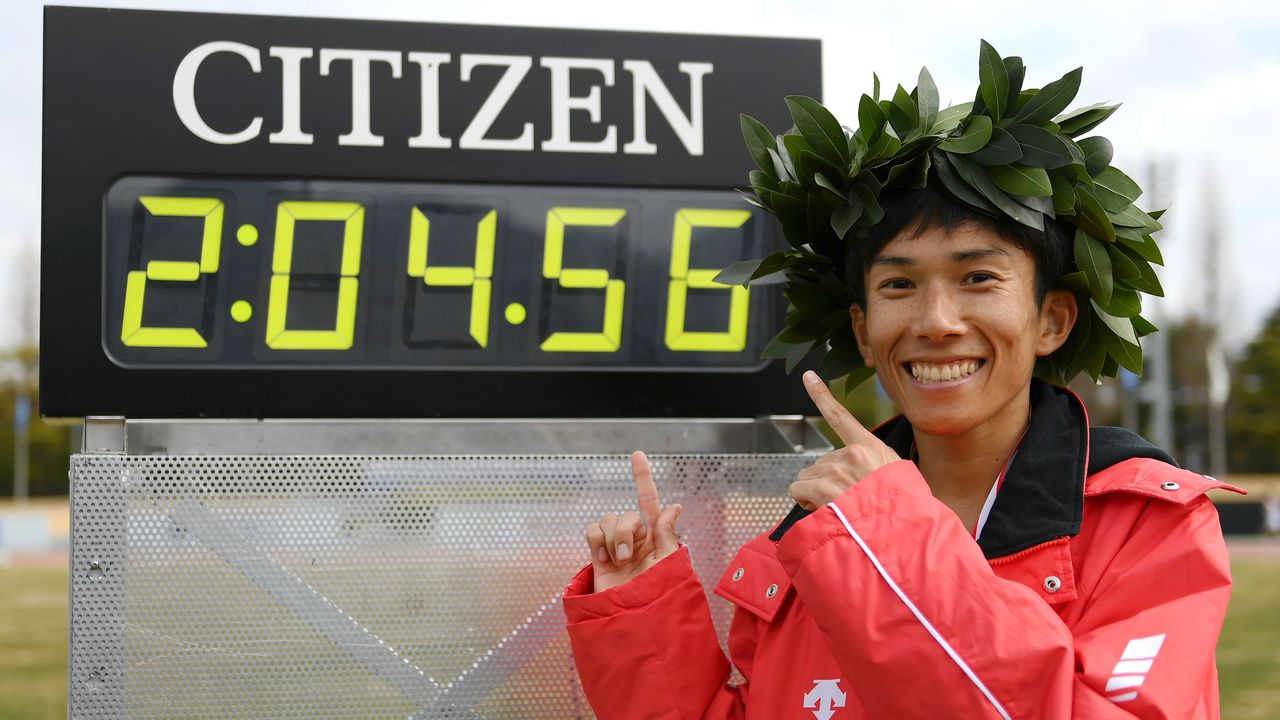 Vaporfly and a Seismic Shift in Marathon Running

Sports May 24, 2021
Cushioned shoes like the Nike Vaporfly have taken Japan’s long-distance running scene by storm, helping runners renew the national men’s marathon record three times in four years. Some 90% of competitors in the 2021 Hakone Ekiden wore thick-soled soles, which contributed to a shakeup of the university leaderboard. Some big names in Japanese athletics talk about the dramatic changes seen in the men’s marathon.

The aim of the marathon is the conquest of long distances. After watching the marathon at the 1908 London Olympics, the fourth ever modern games, Osaka Mainichi Shimbun foreign correspondent Sōma Kanjirō wrote,

The following year, the Osaka Mainichi Shimbun newspaper hosted its inaugural marathon from Kobe to Osaka. In 1912, Kanakuri Shizō took part in the marathon event at the Stockholm Olympics. He would later lead a Japanese squad to participate in the 1953 Boston Marathon, where one of his runners, Yamada Keizō, won the race. Along with Japanese winners Tanaka Shigeki (1951) and Hamamura Hideo (1955), Yamada was an inspiration to Japanese citizens rebuilding the nation from the ashes of war. The idea that while we might lack speed, no one could beat us on endurance, grew marathon racing as a sport, with fervent support from Japanese race watchers.

In February 2021, the Lake Biwa Mainichi Marathon was won by 25-year-old Suzuki Kengo, who set a new Japanese record with a time of 2:04:56. The previous record was 2:05:29, set by Ōsako Suguru at the 2020 Tokyo Marathon. While Suzuki Kengo is the first runner of non-African descent to finish under 2:05, the most surprising thing about the February race was not Suzuki’s time, but the fact that an extraordinary 42 athletes (of whom 40 were Japanese) ran “sub-ten” times of less than 2:10. One of these runners, 2018 Boston Marathon winner Kawauchi Yūki finished his 109th marathon in under 2:08. Kawauchi says he believes this feat was partly attributable to the fact that he switched to thick-sole shoes for the race.

An ace runner for Kanagawa University, Suzuki Kengo recently came an impressive eighth in the 15-kilometer Zevenheuvelenloop (Seven Hills Run) in Nijmegen, the Netherlands. While Suzuki’s talents were definitely enhanced by the revolution in sneaker tech, athletics insiders take a more cautious view of the result. They say that if the Tokyo and Fukuoka Marathons, in which registrations were heavily restricted in 2020 due to COVID-19, had seen their usual numbers of runners, there would not have been such a concentration of runners in the Lake Biwa race. Similar times would have been set, but dispersed between a larger number of competitions. 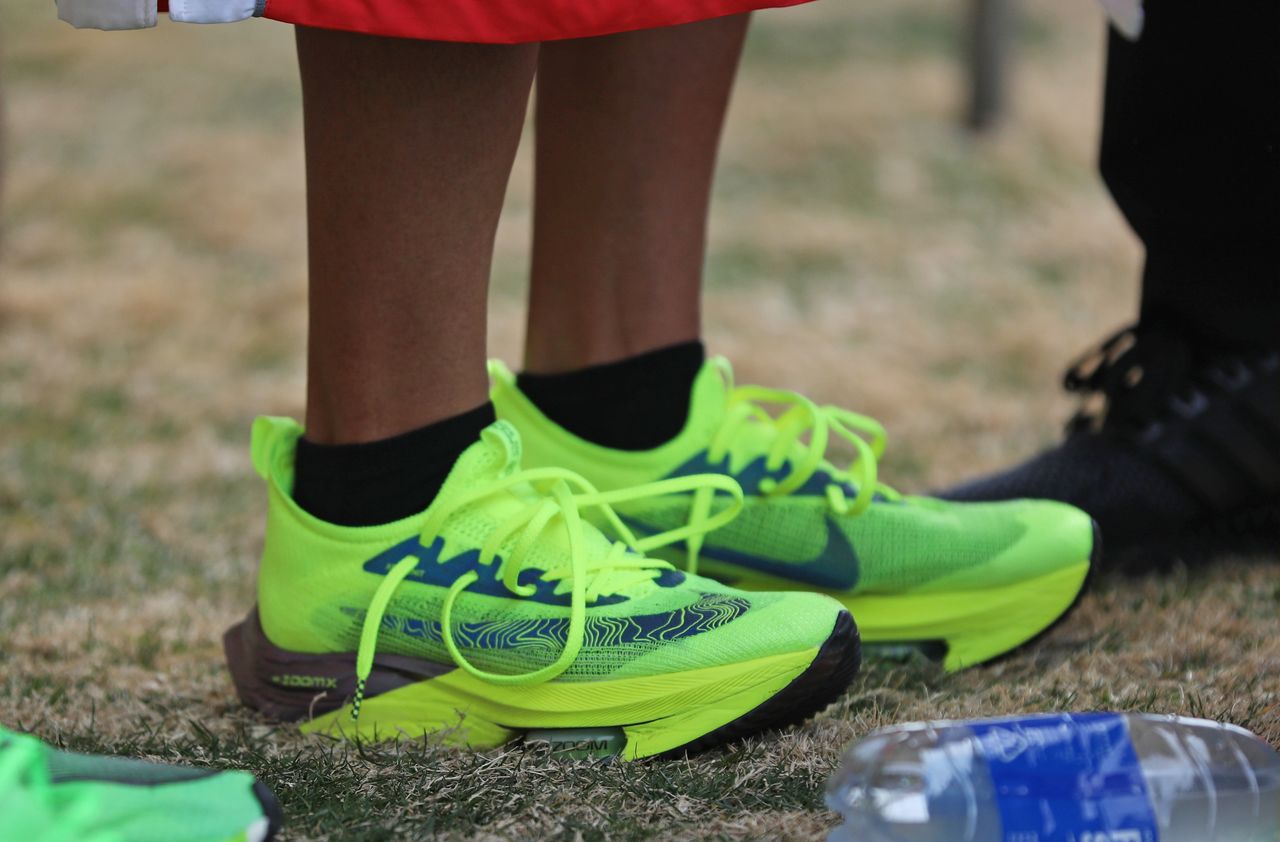 A look at the top 100 times achieved in each year shows that while seven Japanese marathoners ran times that placed them in this category in 2018, none did do in 2019. In 2020, though, Japan was the third-most represented country on this list (17 record times), after Ethiopia (44) and Kenya (20). Marred as this year’s achievements have been by the sharp decrease in events due to COVID-19, of the year’s 100 top performances as of March 2021, an incredible 84 were by Japanese runners.

While cushioned running shoes are now produced by all manufacturers, the original thick-soled running shoe is the Nike Vaporfly, developed for long-distance running. When developing the Vaporfly, Nike incorporated a carbon fiber plate into a lightweight sole to add bounce. Ōsako Suguru was one of the first Japanese marathoners to use this new weapon under the supervision of distance-running legend Alberto Salazar, after transferring to Nike’s Oregon Project.

In the February 2018 Tokyo Marathon, Shitara Yūta set a new Japanese record of 2:06:11 wearing Vaporflys, a record that was broken by Ōsako at the Chicago Marathon in October that year, with a time of 2:05:50. Ōsako failed to make the cut for the Japan Olympic Team at the qualifying marathon in September 2019, but he went on to run a 2:05:29 at the 2020 Tokyo Marathon, breaking his own national record. When no other Japanese runner surpassed his time at the March 2020 Lake Biwa Mainichi Marathon, Ōsako secured his Olympic berth for the men’s marathon, causing his Vaporflys to receive a lot of attention.

Further adding to the buzz was the highly popular Hakone Ekiden long-distance relay race. In the 2019 Hakone Ekiden, Adidas-sponsored Aoyama Gakuin University, a perennial favorite, was beaten by the Tōkai University team, who ran in Nike Vaporflys. The following year, Aoyama Gakuin created even more of a buzz when they switched to Vaporflys themselves and reclaimed their title. At the 2021 Hakone Ekiden, 90% of the 200 competitors from 20 universities competed in thick-soled shoes, a phenomenon that saw the emergence of some new up-and-coming powers among the collegiate teams participating.

A focus on speed in what is generally thought of as an endurance event has been around for years. Ever since the 1952 Helsinki Olympics, when Czechoslovakia’s Emil Zátopek, nicknamed the “Czech Locomotive,” won gold in the 5,000-meter, 10,000-meter, and marathon events, the “speed marathon” approach has often been advocated in Japan as well. This has not led to an improvement in times, however.

Unlike shorter track events, marathons are held on various courses and in a variety of conditions. For this reason, World Athletics did not officially recognize “world record” marathon times until 2004, rather referring to “world best” times. The marathon requires stamina more than speed, and there was a demand for shoes that were as light as possible with paper thin soles, so as not to put additional strain on the body.

Usui Tetsuo, who was a long-distance candidate for the 1964 Tokyo Olympics and is known for his commentary on the Hakone Ekiden, says: “In speed events of up to 10,000 meters you use a kicking style. Back then, we wore spiked shoes on dirt tracks, which invariably put strain on the legs. Most athletes injured their Achilles tendons. Tsuburaya Kōkichi and I both did. The Achilles tendon is a bundle of hair-like fibers—surgery did not help.”

Fellow marathoner Tsuburaya, who won bronze at the Tokyo Olympics, also came in sixth in the 10,000 meters—he had a background in track events. People still talk about Tsuburaya’s tragic suicide after the failure of an Achilles tendon operation that he underwent aiming to make a comeback. In long-distance road races like marathons, heel striking is more effective than forefoot running. Running at the same speed in a marathon as you do in a shorter race on a track is easier said than done, and attempting to do so is inherently dangerous, as the two types of event are mutually exclusive. In the mid-1980s, however, Nakayama Takeyuki burst onto the Japanese marathon scene like a comet, apparently with an answer to this problem.

Says Nakayama: “I didn’t have the speed of Seko or the Sō brothers [identical twins Shigeru and Takeshi] on my side, and would never have beaten their times if I had adopted the same running style. This realization led me to adopt a kick-based tiptoe running style like that used by Kenyan runners. While mastering this style was not difficult per se, incorporating it into a marathon without injuring myself was a different story.”

The style of running on tiptoe, in other words, the forefoot style, involves landing on, and then bouncing off, the side of your right little toe. Nakayama says that to reduce the impact of the “kick,” he searched for a way to strike the ground with a band of his foot, rather than a single point.

“This is not baseball or tennis. We marathon runners don’t have moves we can show off. I wanted to run in a way that looked elegant. I trained furiously to perfect a style that was both elegant and fast and would enable me to keep running professionally.” 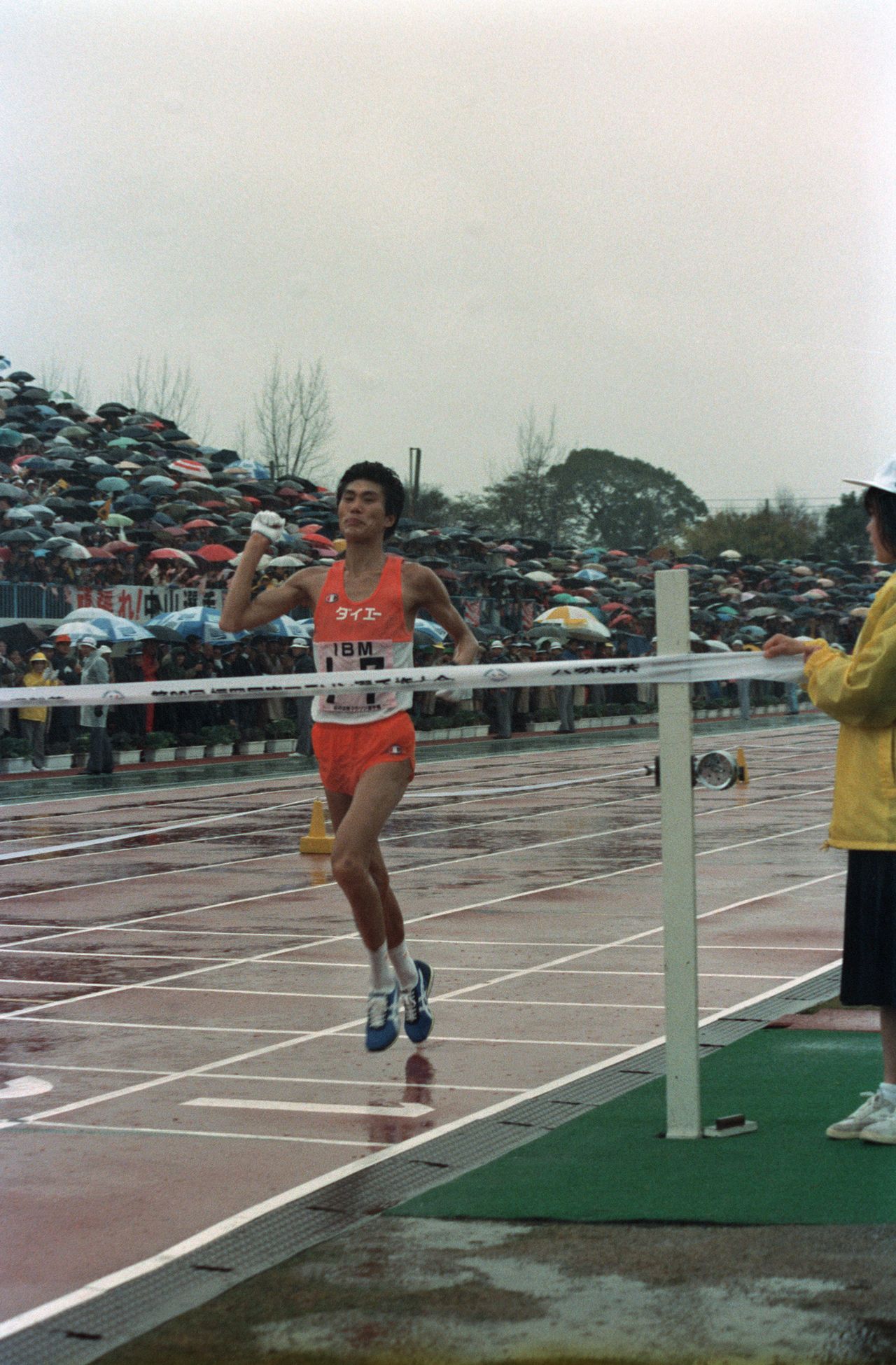 During track training, Nakayama would run 25 laps of the track, timing himself to the tenth of the second on each 400-meter lap, and striving to compensate for his lack of speed with his running technique. Nakayama says that when he watched footage of Ōsako breaking the Japanese record, he realized that Ōsako’s form was exactly the same as his own. In Ōsako’s case, it was lighter materials and carbon plates that enabled him to ditch the heel-strike style. In other words, the barrier that Nakayama worked so hard to overcome in the 1980s has now been removed by shoe manufacturers.

According to Kurosaki Yū of the pioneering running magazine Runners, “Despite costing around double the price, thick-soled shoes are extremely popular with amateur runners, especially the younger ones. Amateur runners all have their own goals, however—someone with a marathon time of four or five hours is probably not so fussy about shoes. Switching shoe type can create a risk of injury as well. At higher levels, though, while the whole world has benefited from these new shoes, Japan seems to have benefited more than most.”

It’s not all good, however. Usui warns: “Runners need to do the right kind of training, or we will have more injuries. The forward shift in your center of gravity can result in knee injuries.”

Aoyama Gakuin coach Hara Susumu echoes this, saying he only allows his runners to wear thick-soled shoes in races.

It is precisely because marathon running enjoys unparalleled popularity in Japan that advances in shoe technology have led to better times. After all, outside the Olympics and the World Championships, Japan is the only country to hold women’s marathons and marathons exclusively for “elite” runners. And nowhere else in the world will you find marathons broadcast in their entirety live on terrestrial TV. These events always enjoy double-digit ratings, as well. An overseas friend of mine once asked me with a straight face, “Don’t you find this boring?”

In 1951, before Japan had opened up to the rest of the world, Tanaka Shigeki won the Boston Marathon at the age of 20. Tanaka was followed by Yamada Keizō, Hamamura Hideo, Shigematsu Morio, Kimihara Kenji, Unetani Yoshiaki, Seko Toshihiko, and, three years ago, Kawauchi Yūki. Until Kenya’s rise to prominence in the 1990s, Japan produced more champions than any other country in what could be called the world’s most traditional sport. It was this pride in our athletes that gave rise to Japan’s love affair with the marathon—this idea that you hang in there even when the going gets tough and never give up, while exercising self-control. Terasawa Tōru versus Kimihara Kenji, the Sō brothers versus Seko, Seko versus Nakayama, Nakayma versus Morishita Kōichi: Far from being “boring”, these two-hour-long battles brought us all together—male and female, young and old. Along with baseball, marathon running was the sport that sustained the Japanese public as their country rebuilt from its defeat in the war.

As athletes continue to run better times, the gap between Japan and the rest of the world will continue to narrow. In the immediate future, however, we are competing against the clock, and technology is the star competitor. One cameraman covering a marathon course recently remarked that it suddenly occurred to him that all the runners “looked and sounded different.”

The Lake Biwa Mainichi Marathon, which prided itself on having notched up more competitions than any other Japanese marathon, was held for the last time this year, finishing with Suzuki’s record time. It has also been announced that 2021 will be the last year of the Fukuoka International Marathon, Japan’s most prestigious. Thus, the Japanese institution that is the marathon is entering a new age with the sound of a new footstep.

(Originally published in Japanese. Banner photo: Suzuki Kengo after winning the Lake Biwa Mainichi Marathon and breaking the Japanese record with a time of 2:04:56. © Jiji.)