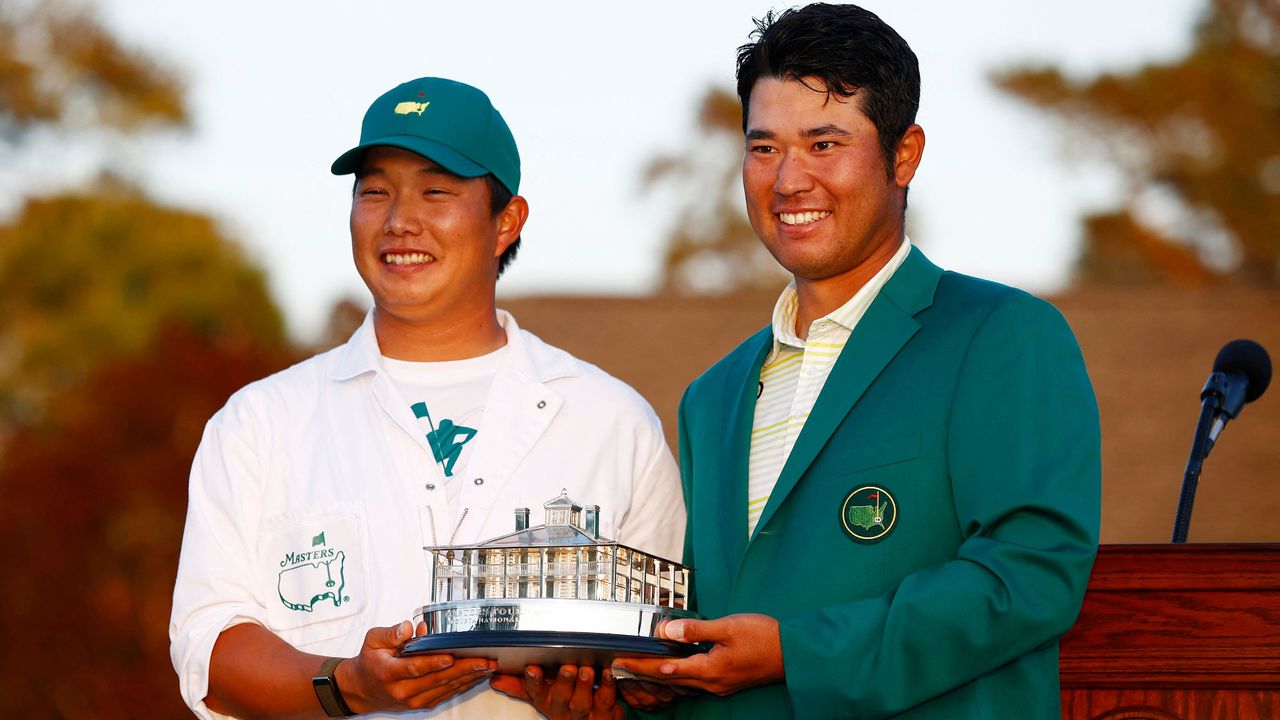 Sports May 28, 2021
Matsuyama Hideki’s unprecedented Masters win, a dream 85 years in the making, was a victory for men’s golfing in Japan. This article looks back on the golfer’s journey to the green jacket.

I find it extremely difficult to accurately describe Matsuyama Hideki’s Masters win. A feat? An accomplishment? A milestone? A great success? Everything seems to come off as a cliché. In attempting to sum up the scale of what he has done, my words end up sounding hollow and trite.

Taiwanese-born Chin Seisui and Toda Tōichirō were the first golfers to play in the Masters for Japan, way back at the third tournament in 1936. In the 85 years since, 33 Japanese golfers, including Matsuyama, have taken their shot at the coveted green jacket. In 133 attempts, all have failed, until now.

I became a golf writer in 1989, and every time I travelled to Augusta National Golf Club where the tournament is held, I would end up writing big, ambitious sentences like “so-and-so is aiming to become Japan’s first ever golfer to win a major title by taking the green jacket.” Sometimes, my hope for a victory was so strong that it overwhelmed me.

In the end, though, the players who built Japan’s golden age of golf, including the trio of Aoki Isao, “Jumbo” Ozaki Masashi, and Nakajima Tsuneyuki, known collectively as AON, along with Ozaki Naomichi and Maruyama Shigeki, all headed home from the Masters emptyhanded. After decades of unmet expectations, to witness a Japanese player slip on the green jacket leaves me speechless.

When Jumbo Ozaki described the victory as dai igyō, a “massive achievement,” for the golf world and Nakajima, shedding tears of joy, confessed on television that he never thought this day would come, I know exactly how they felt. I can imagine these two legends who have played the Augusta course saying to me, “You’re not a golf pro, what could you possibly understand?” So, let me simply offer my heartfelt congratulations to Matsuyama and express my happiness at his victory.

Encouragement from Victims of the Great East Japan Earthquake

The Masters, the US Open, the British Open, and the PGA Championship are collectively called the “majors” in golfing. Among the four, the Masters is viewed by many as the most prestigious. Nakajima has described the Masters as the one tournament every pro wants to win. This is not hyperbole. The tournament attracts all the best players in the world. Australian Greg Norman, the strongest player from the late 1980s to the mid-1990s, Scotland’s Colin Montgomerie, the European Tour’s top prize winner for seven consecutive years, and Ernie Els, the South African genius, were among the many greats who coveted the title but ultimately failed to ever don the green jacket. Norman once held a six-shot lead heading into the last day, only to be upset by Nick Faldo on the final round, showing just how tough the competition can be.

Matsuyama’s success holds another layer of sentiment in Japan, as well. This year marks the tenth anniversary of the Great East Japan Earthquake. Matsuyama had won the Asia Pacific Amateur Championship and qualified for the Masters in 2010, but during that unforgettable March of 2011 he was overcome with worry sitting in the dormitory of his golf club at Miyagi Prefecture’s Tōhoku Fukushi University. The disaster ravaged Miyagi. Having witnessed the devastation with his own eyes, Matsuyama found himself struggling to muster the spirit to face the Masters and doubting whether he should go at all.

The people of the region, however, ended up offering Matsuyama the encouragement he needed. Words of support came flooding in by telephone and email. One particularly stirring message read, “Matsuyama, you have to go to the Masters. Just go, it will be fine.” The outpouring of support convinced him to go. At Augusta, he lived up to their expectations, finishing twenty-seventh to become the first Japanese player to win the Low Amateur title at the tournament. Then, once he returned home to Japan, he went to areas affected by the disaster to volunteer in a clear demonstration of his integrity and character.

Even when being interviewed about his latest and greatest victory, his thoughts were still on those in the disaster area. Wearing the green jacket, he said, “I believe I’ve changed in the decade since I first competed at the Masters. I don’t know if ten years is early or late, but I’m happy if this helps repay everyone who encouraged me back then.”

At a remote press conference immediately after his return to Japan, he offered more words of thanks to the people of Tōhoku, saying, “I haven’t forgotten the gratitude I felt when you sent me over the first time ten years ago, even with all the difficulties everyone was facing.”

There is no need here to go over all the success Matsuyama found after his confidence-building debut at the tournament, so I will skip that period. However, it is important to remember that his path to the championship was not always an easy one.

The period after his 2017 win at the WGC Bridgestone Invitational was particularly difficult. He injured his left thumb in 2018, and suddenly this powerhouse, who had built his own success by out-practicing everyone around him, was unable to bring all his strength to bear. Many leading players have been forced to retire due to similar injuries, and some say Matsuyama even feared he would never be able to golf again.

His injury eventually healed with intense support from trainer Iida Mitsuteru and his staff, but Matsuyama’s worries about his swing continued. I heard stories that he was suddenly failing to drive the ball the way he visualized in his head, so he began reviewing footage from his amateur days, searching in vain for a way to solve his issues. Even so, he still managed to maintain a play record every bit as good as any in Japan’s golf history. That was not enough to satisfy uncompromising Matsuyama, though, who always strives for highest possible level of performance.

Team Matsuyama, made up of staff including trainer Iida and caddie Hayafuji Shōta, were constant sources of support in his path to the Masters. There were troubled moments, though. At the Valero Texas Open, the week before the Masters, Matsuyama started strong, but then suffered a series of setbacks. His irritation showed during play, including lashing out at Hayafuji, with his behavior drawing consternation from other members of his team.

However, he eventually settled into his game. “I wondered what I was so angry at, and suddenly realized I was just upset with myself,” Matsuyama recounted later. He was able to keep tighter control over his play and a more even keel once he arrived at Augusta. “I decided that I had to get through the week without getting angry and just accept my mistakes. It was my team that really helped me get hold of myself even with all the pressure, and just before the Masters, I realized I was lucky to have them.”

One new member of the team this year, coach Mezawa Hidenori, has been a particular source of strength. Mezawa previously coached professional women players like Kawamoto Yui and Arimura Chie. Before his arrival, Matsuyama handled all technical decisions himself, but the two now work these matters out together.

It took some time for results to show, but they went through data and old footage to solve each of Matsuyama’s lingering issues. “I had been doing it all on my own and convinced myself that my methods were right. Mezawa brought an outside observer’s perspective and really helped set me in the right direction.”

Once he had a clear path before him, Matsuyama was more emotionally stabile. He found the wherewithal to smile even when he made mistakes in the middle of a fierce competition under the eyes of golf fans all around the world.

Matsuyama’s victory became a top story on all of America’s major media outlets. In an AP News article, 18-time major winner and king of the golf world, Jack Nicklaus, was quoted as saying, “I just think you’ve just seen the start of what’s going to be truly one of your world’s great players over the next ten to fifteen years.” That comment actually dates from when Matsuyama won the Memorial tour in 2014, where Nicklaus was the host, and his latest victory showed the truth of that remark.

Nicklaus reacted to Matsuyama’s Masters victory on Twitter, saying, “I’m not only very happy and pleased for Hideki, but also the whole golfing world of Japan,” continuing, “Hideki will also now forever be a hero to his country.”

Matsuyama managed to break through a barrier that had thwarted Japanese athletes for 85 years, and now no one can deny that he has risen to the next level of play. According to Nakajima: “Now [Matsuyama] can approach the majors with a new level of confidence. He has become a different player, and others in the game have more to fear from him.”

Matsuyama, who is still only 29 years old, now dreams of achieving a grand slam of all four major titles. So far only five people have accomplished the feat, among them Nicklaus and Tiger Woods. I look forward to seeing the legend that Matsuyama will build.