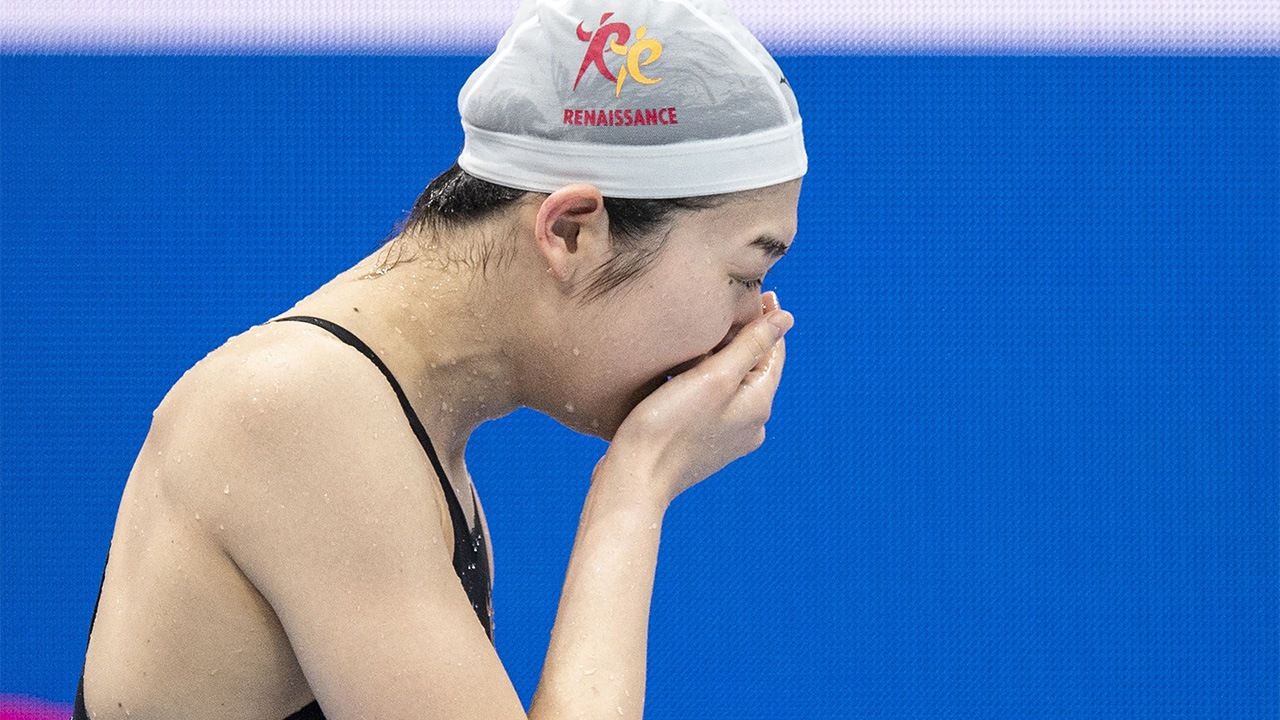 After Illness, Ikee Rikako Reasserts her Dominance in Dramatic Return to Swimming

Sports Tokyo 2020 Jun 22, 2021
Swimmer Ikee Rikako came back in monumental fashion following treatment for leukemia by winning all four of her events at Japan’s national swimming championships in April. The 20-year-old secured a spot on Japan’s Olympic team, thrilling fans who had closely followed her struggle against the disease and her hard road to recovery afterward.

Ikee Rikako’s moment came on April 4, the second day of the national swimming championships, Japan Swim 2021. Looking up from the water at her time after winning her first event, the 100-meter butterfly, she wiped tears from her eyes and took longer than usual to climb from the pool.

The tears did not stop once she got out, though. “I’m so happy right now,” Ikee exclaimed. During her long battle with leukemia, there were moments when the swimmer’s return to competition seemed too impossibly far off to contemplate. But here it was at long last.

Ikee was diagnosed with leukemia in 2019 at the age of 18. The startling news moved the public and sparked an outpouring of support from people from all walks of life who shared her pain and sympathized with her frustrations as she battled her way back to health. Her dramatic win after such a grueling ordeal brought waves of joy to fans, who celebrated alongside the swimmer. Adding to the excitement was that Ikee, her hopes of making the Tokyo Olympics once dashed, earned a trip to the games as part of women’s medley relay team.

It has been just over two years since Ikee made her illness known to the public, an exceedingly long time for an athlete in their prime. Her unrestrained tears were certainly warranted, her reaction expressing all that she had been through to return to competition. 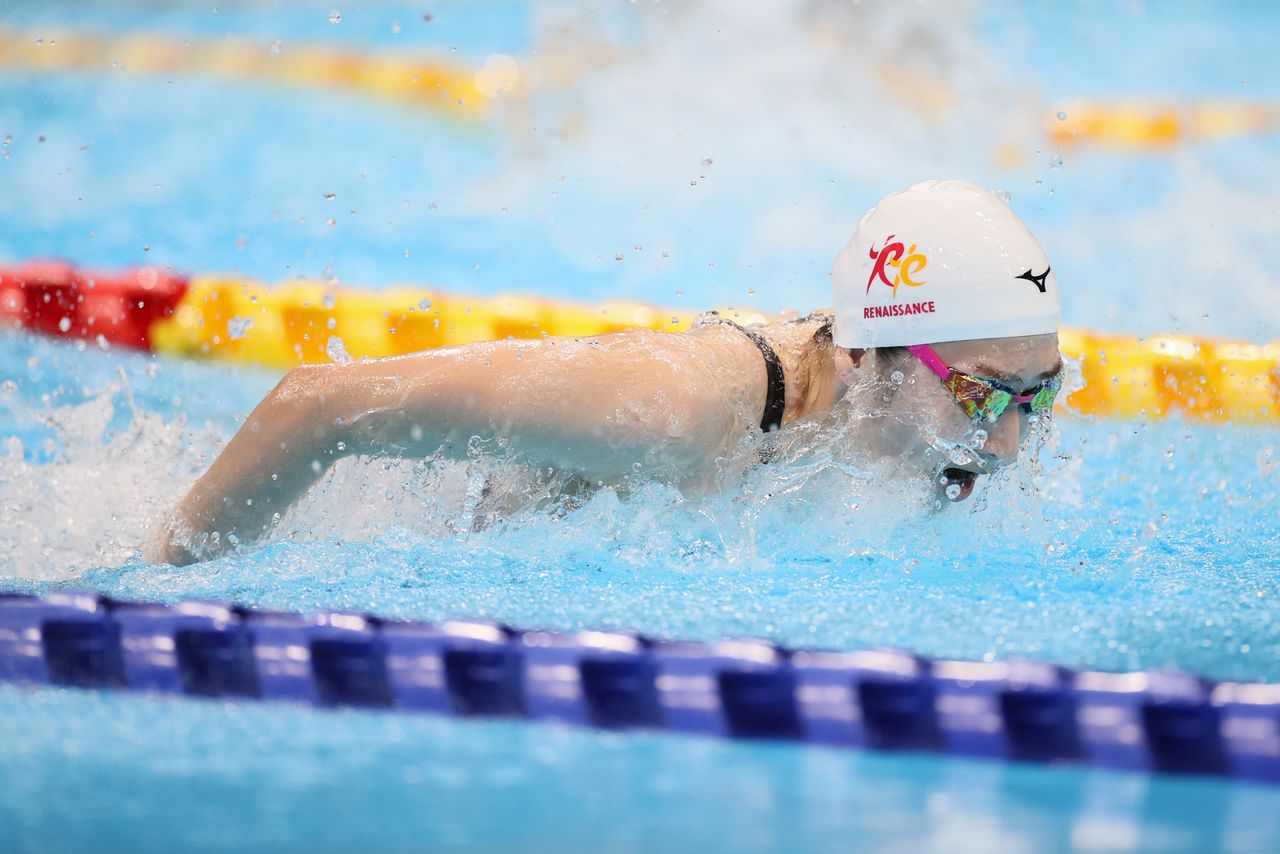 Ikee Rikako leads the final of the 100-meter butterfly at the national championships on April 4, 2021. (© Jiji)

Ikee, whose impressive list of victories established her as a top competitor on the international stage, started swimming at the tender age of three. She says she cannot recall exactly what drew her to the sport, but that family influence might have played a factor as her older brother and sister also swam. She insists the final decision to get into the pool was all her own, though.

She was an active little girl and showed enthusiasm for a wide range of athletic pursuits aside from swimming, something her family supported. For instance, her parent had a bar installed in a room of the house for her to play on. “I would hang upside down, do chin-ups, and other stuff,” Ikee recalls. “It wasn’t as if someone was telling me to do it, either. It was just part of my nature.” As an added outlet for their daughter’s limitless energy, her parents also installed a set of monkey bars, on which Ikee played daily.

It was not many years after starting swimming that Ikee’s talents in the water took her to new heights. As a junior high student she began competing in national swim meets, and when she was in the ninth grade her performance at the nationals earned her a spot on Japan’s national relay team for the world championships. Her selection marked the first time in 14 years for a junior high school student to make the national team.

Climbing the Olympic Stage at Rio

Ikee emerged as a force to be reckoned with while on the swimming circuit in 2016, her freshman year of high school. At Japan’s national swimming championships, which also doubled as the qualifying trials for Japan’s national team heading into the Rio Olympics that same year, she posted a string of impressive times swimming the butterfly and freestyle, including setting seven new high school records and a new Japanese record. Her outstanding performance earned her a berth on the national team in four events.

Following strong performances at competitions in May and June, Ikee decided to take on seven events at the Olympics, the most ever by a Japanese swimmer.

In Rio, she swam an astounding 12 races, including qualifying heats, semifinals, and finals. In one qualifier, she broke the Japanese record for the 100-meter butterfly, her specialty, and then went on to best it again in the semifinal and final. She fell short of a medal, though, finishing sixth on the day but fifth overall following a swimmer being disqualified for failing a test for banned substances.

The newly turned 16-year-old Ikee captured the spotlight with her raw talent. There had been other teenage swimmers who performed brilliantly in the past, but they had competed in the breaststroke and backstroke, whereas Ikee competed in the butterfly and freestyle, arguably more difficult events to break through in international competitions. The experience of being able to hold her own and successfully compete on the Olympic stage raised her confidence along with fan expectations.

Her ability to post strong times in multiple events at the same competition, such as at Rio, also served as a catalyst for Ikee’s rapid rise. Swimming in international meets on a seemingly daily basis, the superstar would sometimes appear effortlessly climbing onto the medal podium after completing different races only minutes apart. Japan had never had an athlete like her before.

By rewriting the history of competitive swimming in Japan, Ikee stirred the hopes of Japanese fans. She has continued to fuel expectations, taking her performance to greater heights. 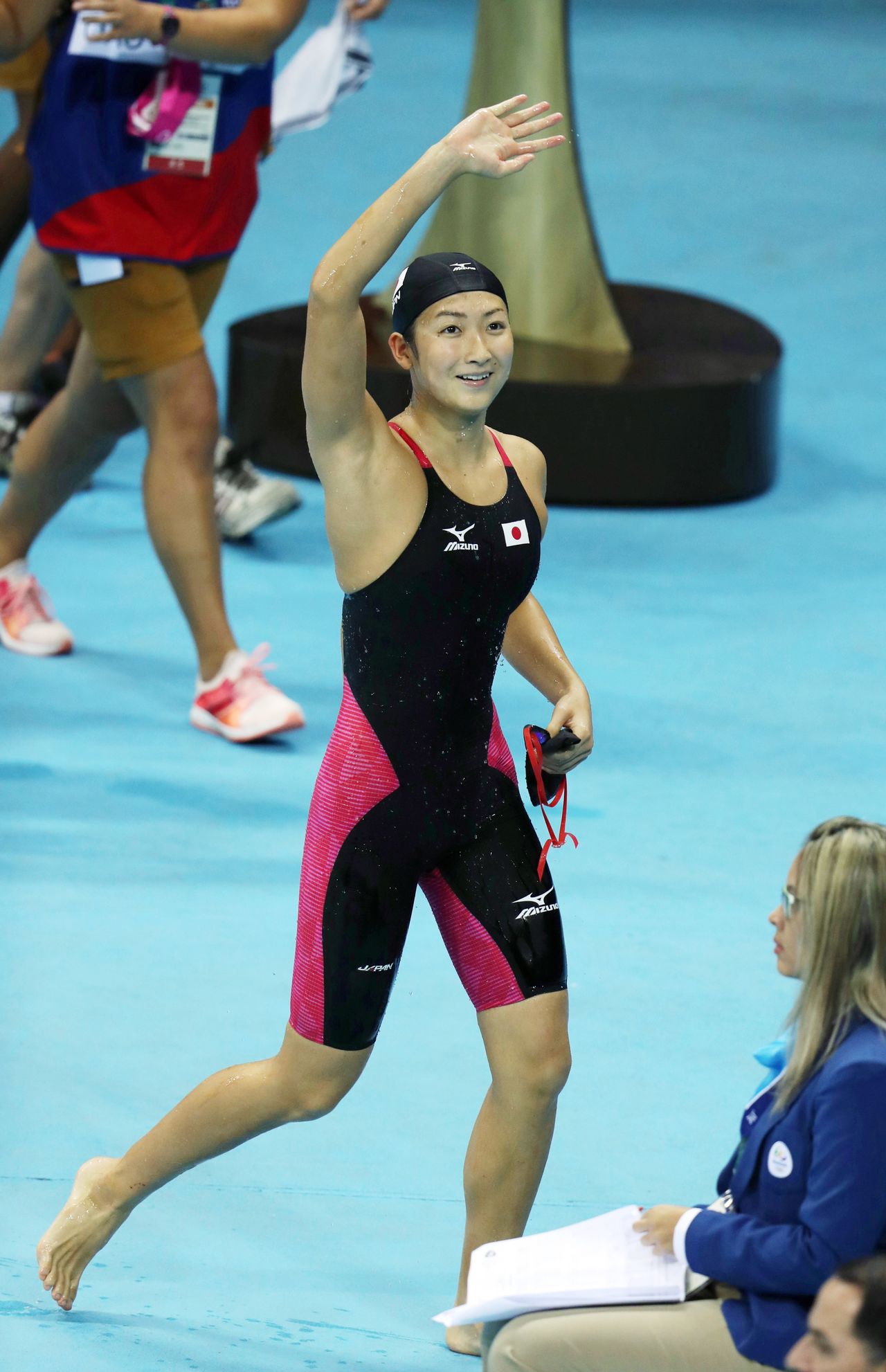 A 16-year-old Ikee waves to the stand following her fifth-place performance in the 100-meter butterfly on August 7, 2016, at the Rio Olympics. (© Jiji)

At the 2017 Japanese national swimming championships, she competed in the 50-meter, 100-meter, and 200-meter freestyle as well as the 50-meter and 100-meter butterfly events. Over the course of the four-day competition, she won all of her 10 races on her way to capturing a record five individual medals.

At the 2018 Asian Games in Jakarta, Indonesia, she competed in the 50–meter and 100-meter freestyle, the 50-meter and 100-meter butterfly, the 400-meter free relay, and the 400-meter medley relay. She won each of the events, becoming the first Japanese athlete to earn six medals at a single competition and was also selected as the tournament’s MVP. Looking at her performances in the Olympic-length 50-meter pool that year, in both the freestyle and butterfly events, she set new national records an astonishing 28 times.

Although blessed with natural physical ability, more than anything else, Ikee’s growth was the result of her overwhelming love of swimming. An episode from 2016 illustrates her competitive spirit.

Upon returning to Japan from Rio, Ikee went straight to Hiroshima from Tokyo’s Haneda Airport to compete in the Japan High School Aquatics Championships, which got underway the following day. She then went on to participate in events every week, including the Junior Olympics and the national swimming championships. It is normal for an athlete to rest after a string of major competitions, but Ikee’s nonstop schedule left most people shaking their heads in disbelief.

I once asked her if she feels the effects of competing so frequently, to which she replied, “I don’t really think it’s so tiring, or that I’m tired. I feel it right after a race, but once the competition is over, I look ahead to what is coming up. Once I’m home, I get really excited for the next event.”

A force unto herself in so many ways, Ikee finished out a successful 2018. Speaking about her future aspirations for the coming year, she commented, “I’m looking forward to 2019 since I’m going to be a university student.” Naturally, she also had the 2020 Tokyo Olympics in her sights.

In January 2019, Ikee went to Australia for a training camp to start preparing for the new season. However, on February 7, it was announced that she was cutting her training short and returning home because she was not feeling well. Just a few days later, on February 12, she made the shocking revelation on social media that she had been diagnosed with leukemia. She withdrew from all upcoming competitions and devoted herself fully to treatment and recovery.

The news sent shockwaves across Japan as well as the international swimming circuit, with the story receiving wide coverage in the foreign press.

Ikee remained in the hospital until December 2019. Following her release, she characterized her long battle by saying that it was “a miracle to be alive.”

Having expressed her intention to sit out the Tokyo Olympics, Ikee started training again in earnest with the goal of competing at the 2024 Games in Paris. She made her return to competitive swimming at the Tokyo Special Swimming Tournament on August 29, 2020, after 594 days away from the sport.

She concentrated on getting back into fitness in steps, practicing her start every day and competing in several competitions. Some seven months after her return to the pool came the national championships. She won her first event—the 100-meter butterfly—clinching a spot on Japan’s national team for the Tokyo Olympics, which had been postponed due to the pandemic.

After her final race—the 50-meter freestyle—she had a smile on her face. “I anticipated I wouldn’t start winning at domestic events again until next year,” she said later. “But I beat my own expectations. I’m proud of myself.” 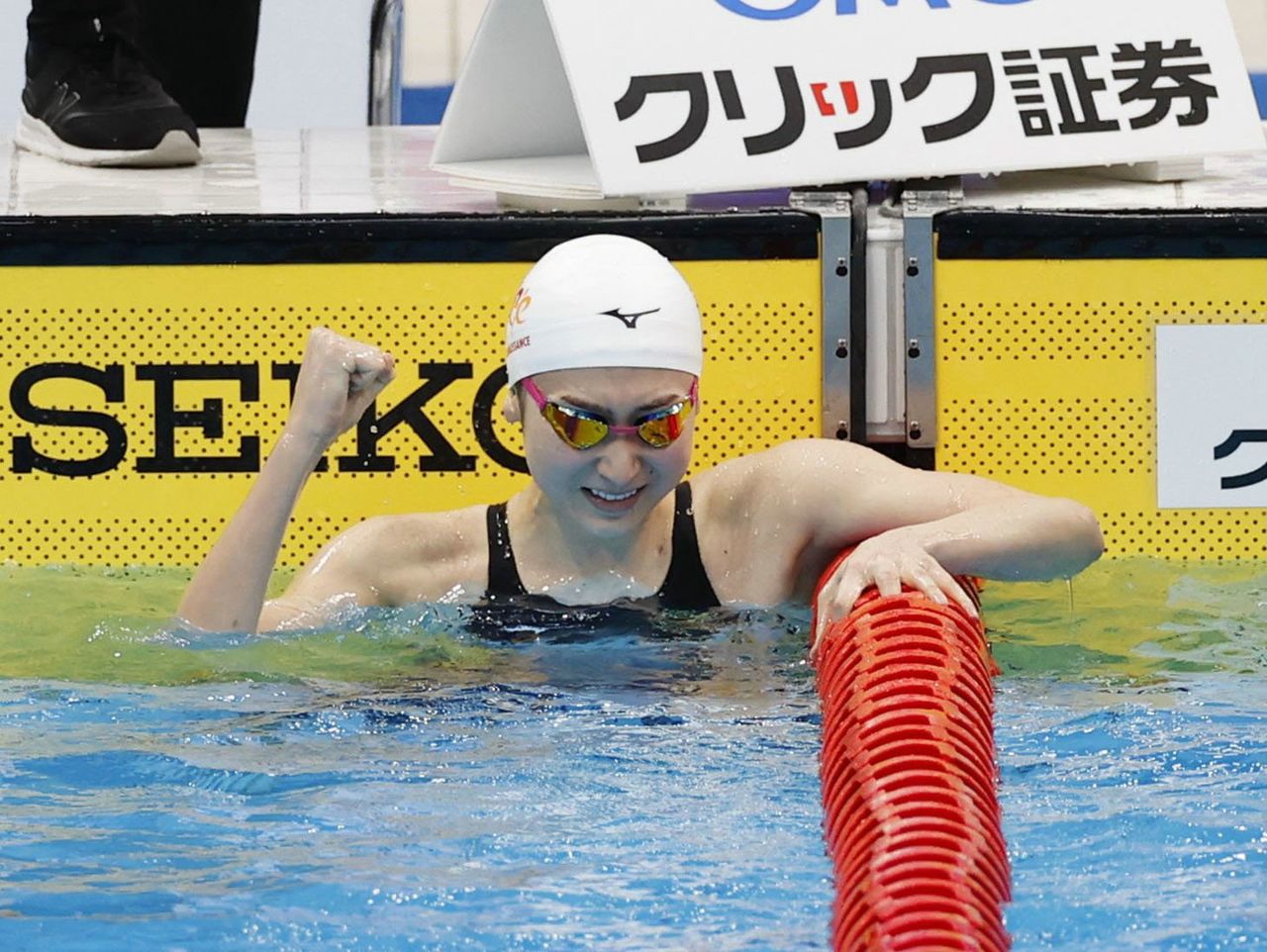 Ikee pumps her fist after winning the 100-meter butterfly at the national championships on April 4, 2021. (© Jiji)

Looking back on the hard road Ikee has traveled, I again wonder what inspired this tale of recovery, touted as a “miracle” by the national and foreign media. If I were to give one reason, I would take a clue from her own words after the Rio Olympics in 2016 when she said: “There are really tough things to deal with. But there are also many things that I’m grateful for. I believe that I’m here because of swimming.”

Ikee loves swimming. It is an inseparable part of her being. In returning to the pool and competition, she returned to the place where she is most herself. This single-minded desire inspired the great comeback story that has touched the hearts of many.

If held as planned, the Tokyo Olympics will start in July. It will be exciting to see how much closer Ikee will be to her previous top form and what she can achieve in the water. 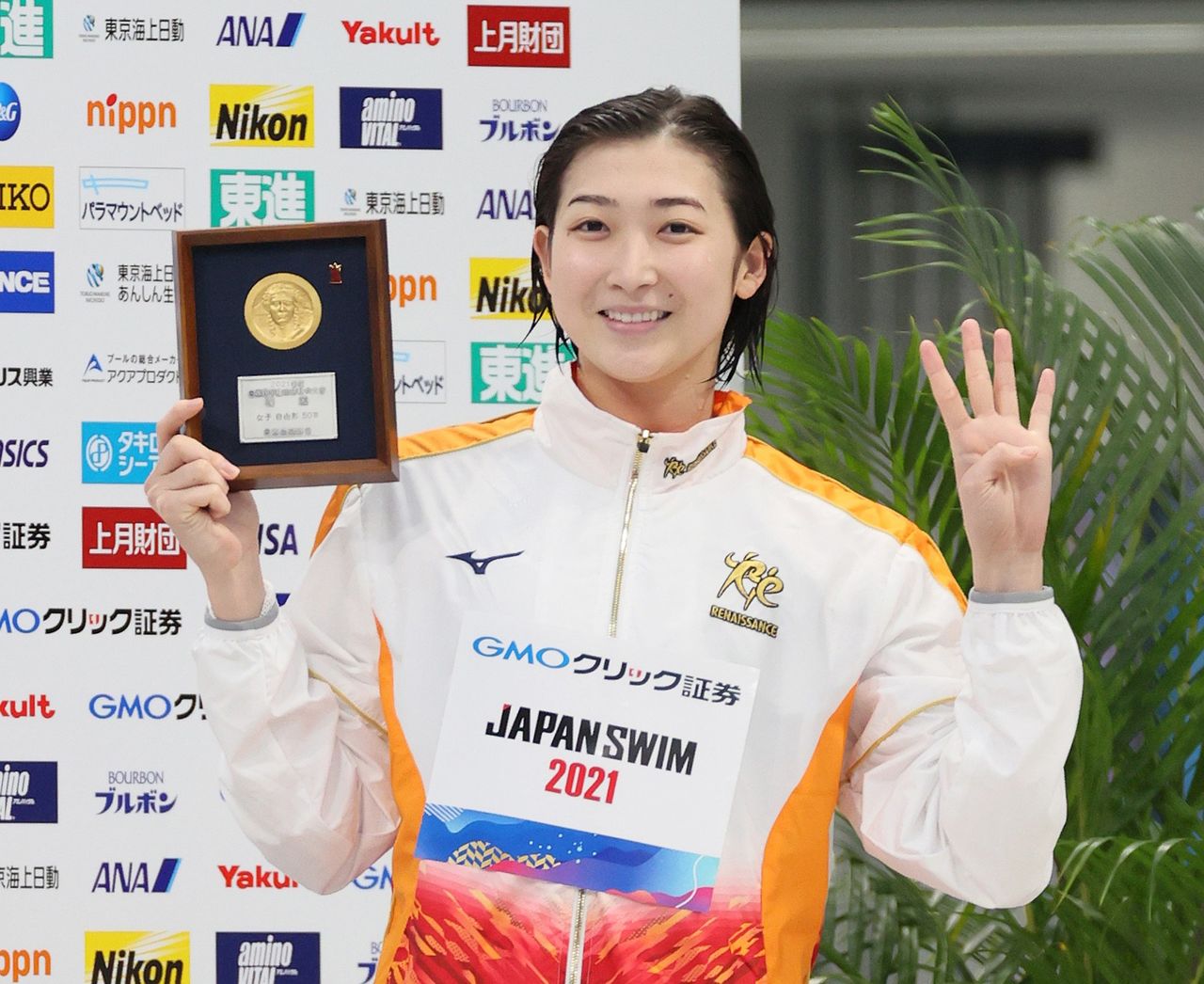 Adding a win in the 50-meter freestyle, Ikee celebrates her fourth title at the national championships on April 10, 2021. (© Jiji)