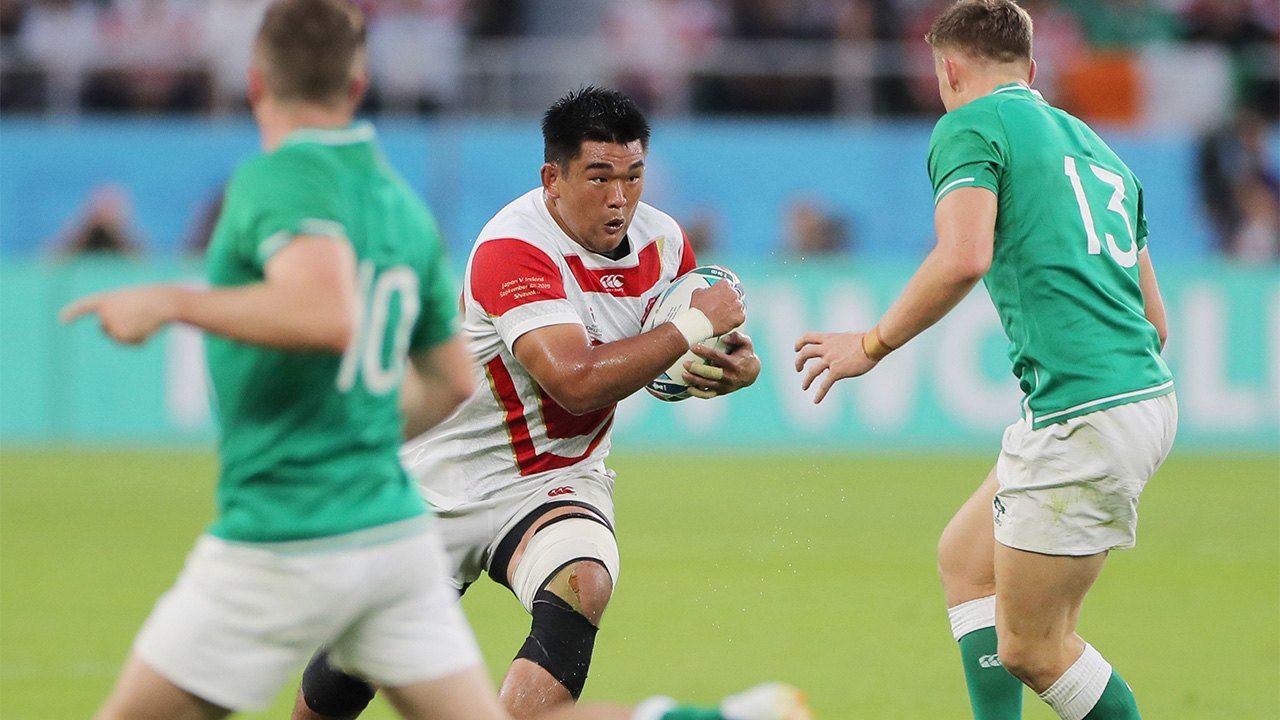 Sports Global Exchange Jun 3, 2021
Koo Ji-won, a 26-year-old rugby player in Japan’s Top League and son of former South Korean rugby champion Koo Dong-choon, was a key player on the Japanese team in the 2019 Rugby World Cup. In a surprising move, given historic relations between Japan and Korea, he acquired Japanese citizenship—motivated by his rugby ambitions.

Picture an international championship match between neighboring countries with complicated historic and political relations. Now imagine that a key player in the victory had a son who followed his father into the sport before becoming a player for his father’s former rival country.

Such stories are surely uncommon anywhere in the world. But this is the tale of one member of Japan’s rugby squad. It would be unthinkable, at least in South Korean soccer or baseball, to find the son of a champion, known for his victory over Japan, to be sporting the red and white flag of the rival.

That player is Koo Ji-won, born in Seoul in 1994. He started playing rugby as a sixth grader, as third prop, whose role is to help stabilize the scrum. In the 2019 World Cup, he helped Japan to reach the final eight—a first for the national squad. Ji-won’s carefree personality and charismatic smile belie his 183-centimeter, 118-kilogram frame. To some fans, he is known affectionately by the nickname “Gū-kun.”

His father, Koo Dong-choon, born in 1963 in the South Korean naval port of Jinhae, started rugby in junior high school, as the first prop. He was chosen for his country’s national squad while still studying at the prestigious Yonsei University, and played on the team for 12 years. He was an imposing force in the scrum against the higher-ranked Japan at the 1988 Asian Rugby Football Tournament, held in Hong Kong. South Korea triumphed against Japan 17–13 in the final round to finish as champions. Incidentally, Japan’s coach at the time, Hibino Hiroshi, took responsibility for the loss and resigned from his post.

Quest for a Greater Challenge

What led the younger Koo to play for Japan, rather than South Korea?

Ji-won and his brother, Koo Ji-yoon, two years his senior, began playing rugby at the same time. Their father sent them for an 18-month homestay in Wellington, New Zealand, a country known for its prowess in rugby, believing that the more competitive setting would help them to become better players. After New Zealand, the brothers set their sights on Japan.

Reflecting on their move, Dong-choon observed that “Rugby was only a minor sport in Korea—where soccer and baseball are almighty. Japan seemed like the only option for them after New Zealand. I knew that the rugby environment was far better in Japan than in Korea.”

Dong-choon once played for the Honda Motor Suzuka Factory Rugby Football Club, the predecessor to the Honda Heat, where his sons now play and he coaches. [On May 29, Koo Ji-won announced he would leave the team at the end of the 2020–21 season.—Ed.] “Even practice games attract spectators—this would be unthinkable in Korea.”

But the Koo brothers faced a hurdle to studying in Japan—few schools accepted rugby exchange students from South Korea. Dong-choon asked his contacts, and his sons finally found placements in Ōita Prefecture, although they knew no one there.

The boys studied at Tsuruya Junior High, in the city of Saiki, and lived in the school’s dormitory. They continued on to Nippon Bunri University High School before entering Takushoku University, in Hachiōji, Tokyo. Throughout their school and college years, neither brother displayed any outstanding performances in national tournaments. Ji-won, the younger of the two, however, was chosen to play on the national U-20 and youth squads while still in high school, and earned a reputation as a strong prop, gradually gaining wider attention.

Reflecting on his teens, Ji-won says that “When I first came to Japan, I couldn’t even speak the language. I faced challenges every day, but people were always helping me out. I was so lucky to have their support, so I could focus on my rugby. I enjoyed the rugby so much. Soon after coming to Japan, I knew I wanted to play in the top league someday. I always aimed to join the national team.”

Some may wonder how Ji-won, a Korean national, could play for Japan. But World Rugby, the international governing body of Rugby Union, stipulates that players can play for a national team if they fulfill any of the following conditions:

(1) They were born in that country.

(2) One of their parents or grandparents were born in that country.

Ji-won joined the Honda Heat after graduating Takushoku University, in 2017. His debut for Japan was a match with Tonga held in Toulouse, France, that November. It was a dream come true. At one point, he was plagued with injuries, but subsequently secured a position for numerous matches. He gained the trust of Jamie Joseph, then the Japan side’s head coach, and was selected as a squad member for the World Cup, held in Japan in 2019. He was fortunate to play in five matches, against Russia, Ireland, Samoa, Scotland, and South Africa. It was the ultimate opportunity—every rugger’s dream.

“I was adamant that I wanted to play in the tournament ever since joining the national squad in high school, and it finally happened. We gained so much support from those four victories—I’ll never forget it. Rugby became much more popular in Japan. Even after our defeat, people encouraged us and expressed their support. I was ecstatic.” 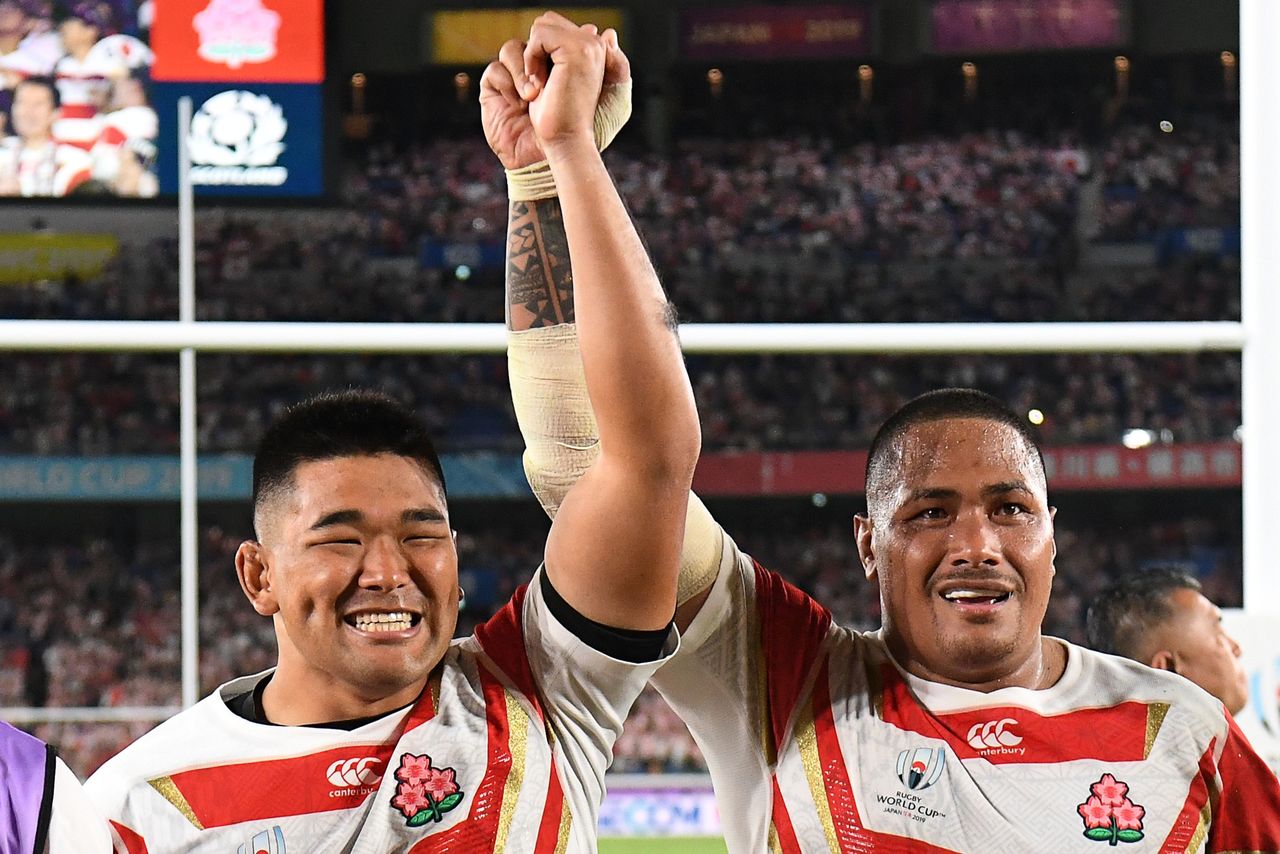 Koo Ji-won (left) and teammate Valu Asaeli Ai when the Japanese team was confirmed in the final eight for the 2019 Rugby World Cup, on October 13, 2019, at Yokohama Stadium. (© AFP/Aflo)

After the World Cup, Ji-won was swamped with media attention, and even appeared in a TV commercial. But all this was dwarfed by a major turning point in his life, in late December, two months after Japan’s loss to South African in the quarterfinal: his acquisition of Japanese citizenship.

Describing his motives for naturalizing, Ji-won says, “Ever since I came to Japan, everyone took such good care of me, for which I am so grateful. I started considering Japanese citizenship when I graduated and joined the workforce. I was keen to focus on my rugby, and thought it would be great to play in the World Cup as a Japanese citizen.”

Although the process usually takes over a year, he gained approval in just six months, possibly bolstered by his involvement in the World Cup.

His decision to acquire Japanese citizenship was always his own, mainly based on his desire to focus on rugby.

Being born in Korea, Ji-won is conscious of the strained relations between the two countries. No matter how “minor” rugby may be in South Korea, his father’s high profile made it likely that his son’s move would attract criticism. Indeed, he was labeled a traitor in some South Korean media.

But for Ji-won, the criticism is irrelevant—he just wants to play better rugby. That was why his father sent him to New Zealand, and was what drew him to move to Japan, where his father had once played.

When he started to play for Japan, he met many senior players who had taken the same step, leaving their home countries in pursuit of their rugby dreams.

Eight of the 31 members of the 2019 team, including captain Leitch Michael, had acquired Japanese citizenship. In fact, the team included members from 7 countries: Japan (15), New Zealand (5), Tonga (5), South Africa (3) and one each from Australia, Samoa, and South Korea. One wonders if there is such a multi-cultural team in rugby, or indeed any sport, worldwide.

Training camps for the team can often last for over two weeks. For overseas tournaments, players train and play rugby, and spend other time together for almost a month. Eating, sleeping, and enjoying time off together are important for team bonding. After joining the squad in November 2017, Ji-won often found himself in such settings, which helped crystallize his move to take Japanese citizenship.

His father was supportive of his decision, due to Ji-won’s conviction that it would provide better opportunities for his rugby.

Since his naturalization, Ji-won feels he has been able to focus whole-heartedly on his sport. After the 2019 World Cup, he expressed his hope to play in the 2023 Cup, in France. With just two years remaining, the team should be advanced in their preparations, but the COVID-19 pandemic has hampered their efforts. The team is set to relaunch in a match against an as-yet undecided team on June 12, in Shizuoka. There is much uncertainty beyond that, but Koo Ji-won is sure to still be a lead forward player in two years, when he turns 28.

Looking ahead, Ji-won has yet to play in the peak regional tournament, now called the Asian Rugby Championship, in which his father enjoyed victory in 1988.

In recent years, the popularity of rugby has also grown in South Korea. There are more Korean players competing internationally. The country’s Men’s Sevens National Team, set to compete in the Tokyo Olympic Games, has grown in strength since it appointed Charles Louw, originally from South Africa, as head coach.

When the current pandemic subsides, Japan and South Korea are sure to compete in future tournaments. How will Koo Ji-won feel when he plays against the country of his birth? What will go through his ever-supportive father’s mind?

When that time comes, I hope that I can again speak to Dong-choon, who crossed borders to dedicate his life to rugby, and Ji-won, who changed citizenship in pursuit of his dreams.