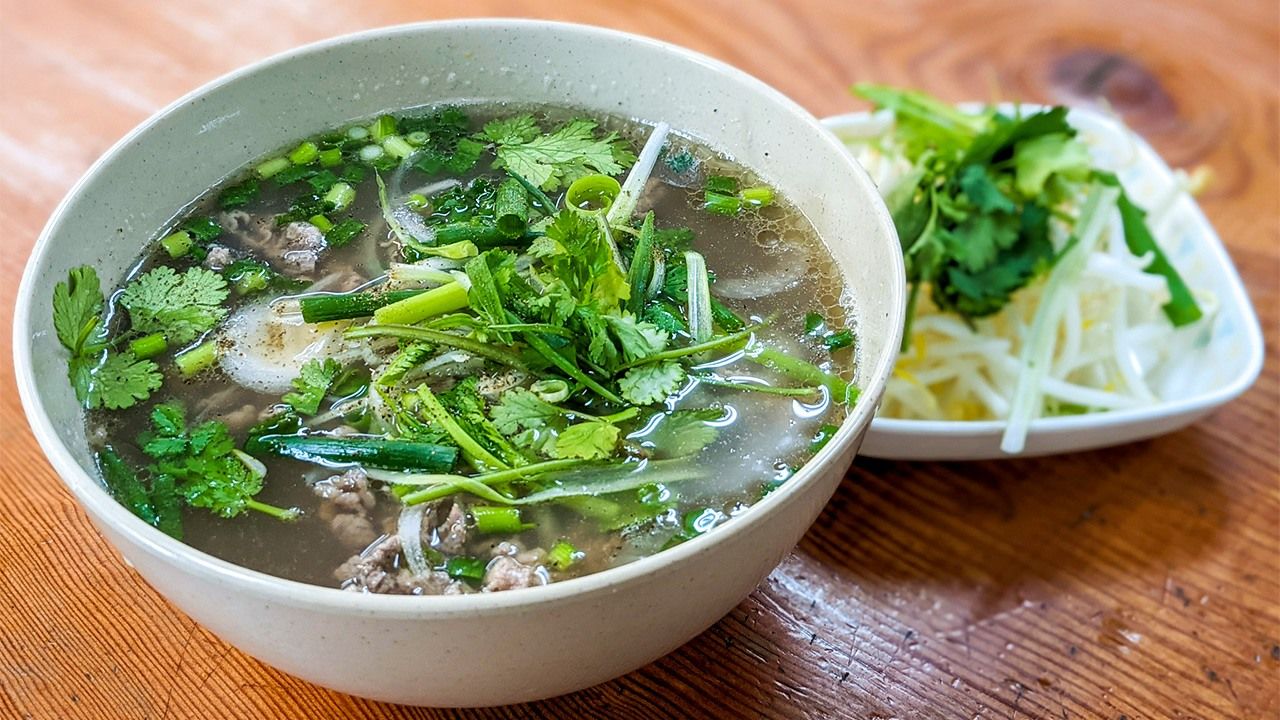 Thanh Ha: An Authentic Vietnamese Eatery in a Yokohama “Danchi”

Society Lifestyle Culture Jun 28, 2021
Restaurants offering foreign cuisines are a part of the daily landscape of life in Japan. Yet what was it that first led these restaurateurs to open shop in an island country in the Far East? A look at Thanh Ha, a famed Vietnamese restaurant in a Kanagawa Prefecture housing complex, the woman who launched it, and the tumultuous era she lived through.

Enveloped in white steam, that famous Vietnamese beef noodle soup known as pho bo was transported to my table. After loading it high with coriander, I first took a spoonful of the broth. So tenderly rich and deep. By the time I had slurped up the pho noodles and taken my first bite of beef, my chopsticks were unstoppable. Sweat beaded my brow. And my body rejoiced to its core.

According to Thanh Ha, the proprietress of her eponymous restaurant, the broth is the lifeblood of pho. With the rich, hearty broth of beef, pork, chicken, and vegetables simmered for 10 hours straight, she re-creates the flavors of her home town of Saigon (today’s Ho Chi Minh City). The mouthfeel of the crisp phak chi coriander and moyashi soybean sprouts, along with the slick, glassy sensation of the soft rice noodles, is wonderfully soothing.

The growing ethnic diversity in Japan today has brought a surge in the number of restaurants where you can savor the tastes and flavors of other lands, as well as an increase in earthy and affordable diners with unpretentious atmospheres. Thanh Ha, where you can savor this pho bō beef soup, is one such place. Open the sliding door and despite the proprietress’s husky Japanese Irasshai! welcome, you are suddenly in Vietnam. The aroma of coriander, a byword for Vietnamese cooking, fills your nostrils. The racks and shelves stacked with countless Vietnamese foods and ingredients covering the walls are overwhelming. 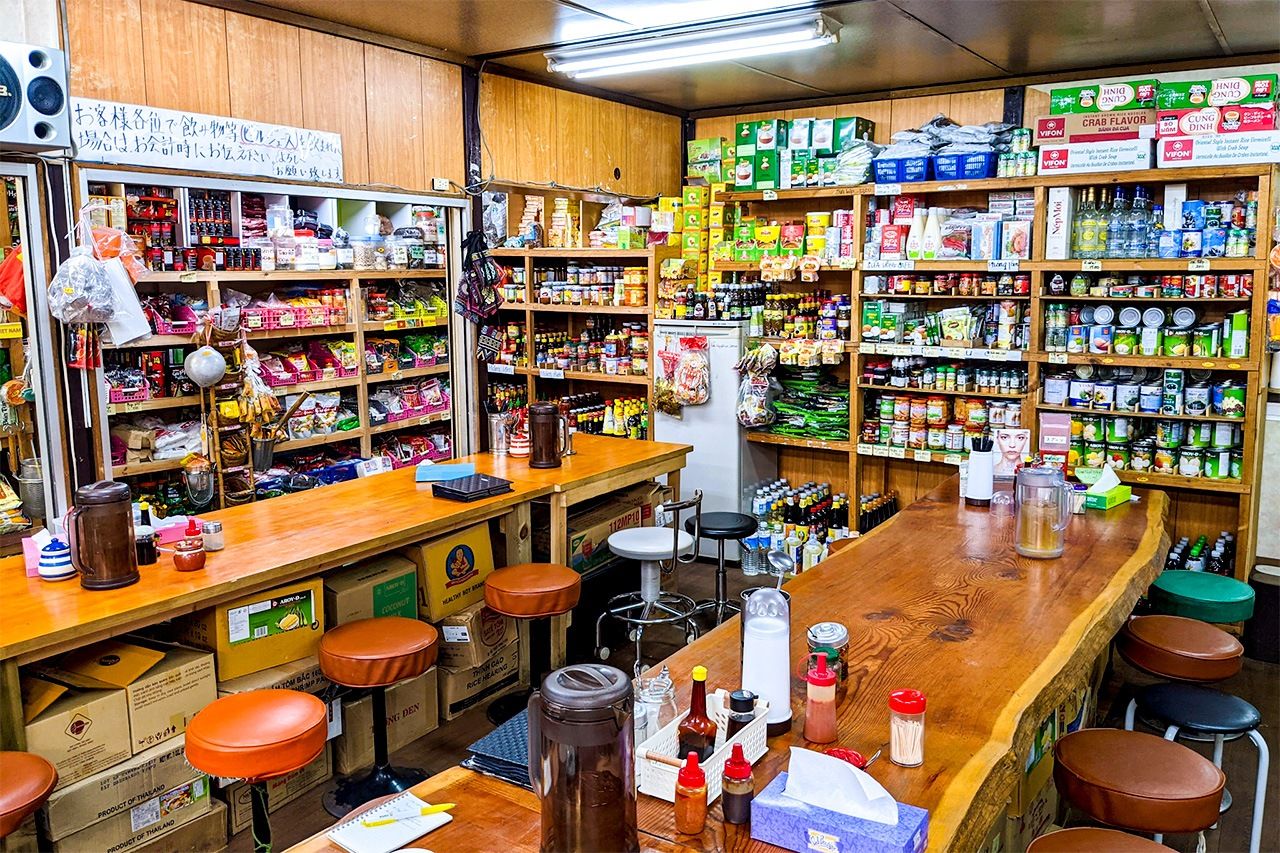 The interior of Thanh Ha, both a restaurant and a market for Vietnamese ingredients. (© Fuchi Takayuki)

The customers, too, are a varied lot. Mixed in with the Vietnamese guests I spot a group of Japanese diners into ethnic foods, and an American with a Filipina companion. They seem to be a young serviceman from the nearby US Navy facility and his girlfriend. They get up to open the fridge and yank out icy cold cans of Saigon beer without a care. If they are allowed to do that, they must be full-fledged regulars . . .

These days Vietnamese restaurants are hardly a rarity in Japan, but there may be none other quite as atmospheric as Thanh Ha, and with good reason. It is all about location. Thanh Ha is located in the heart of the Ichō danchi, known as the most multiethnic housing complex in Japan.

Home to a Dozen Nationalities

Foreign residents first started moving into the Ichō complex in the 1980s. The vast public housing complex consists of no less than 80 apartment blocks that sprawl from the city of Yamato into Yokohama’s Izumi district. Back in 1980 a residency promotion center was established in Minami-rinkan, an area in Yamato. It was a time when refugees from the civil wars and political upheavals sweeping Vietnam, Cambodia, Laos, and other Southeast Asian countries began reaching Japan, and the Japanese government provided assistance in securing places for them to live. Many of the new immigrants wound up in Ichō, and today foreign nationals hailing from more than 10 different countries account for some 20% of the complex’s residents. Ichō was the harbinger of today’s internationalizing Japan. 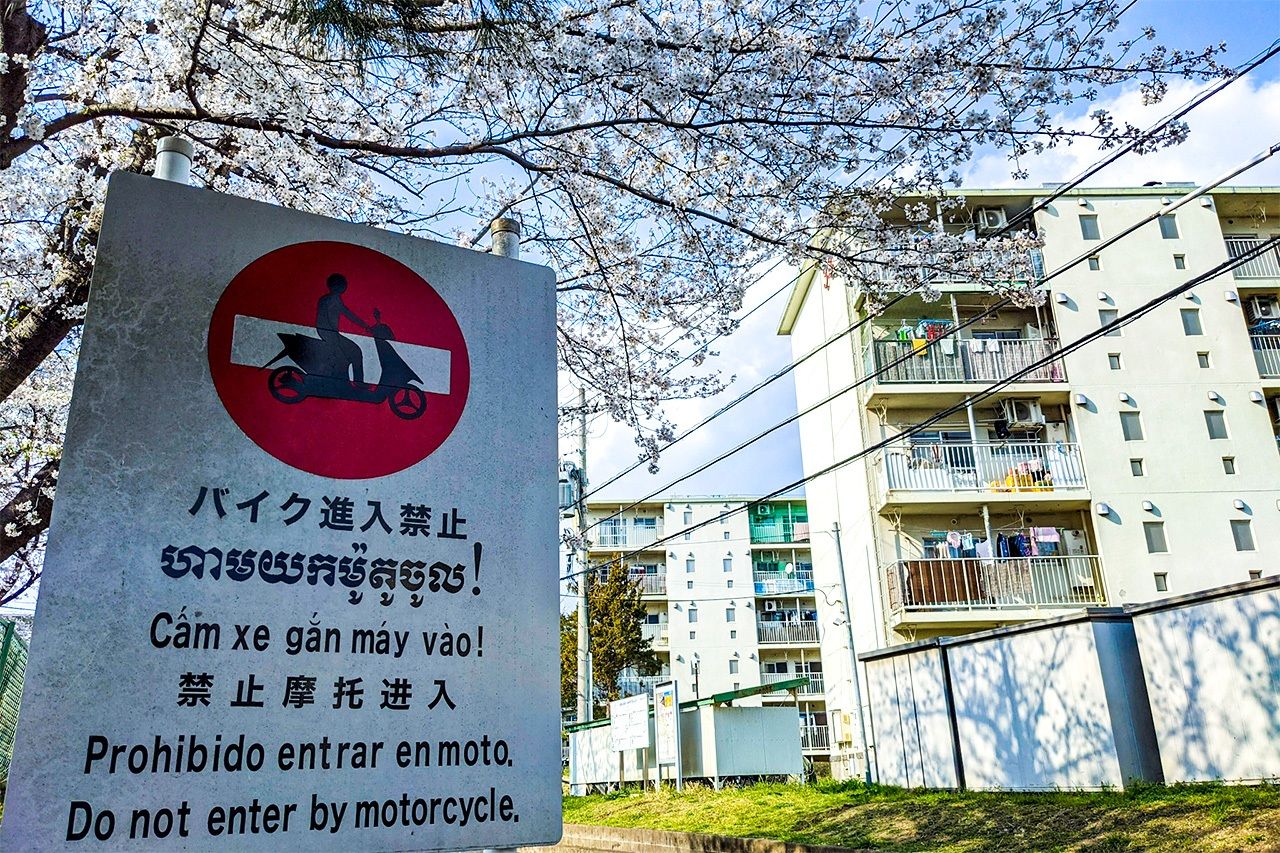 The Ichō danchi, opened in 1971, is the largest housing complex in Kanagawa Prefecture. You can see multilingual signage all over the complex. (© Fuchi Takayuki)

Endō Takeo, a resident of Ichō since 1973 and former chairman of its residents’ association, has been laboring for many long years to promote harmony and rapport between the foreign and Japanese residents of this giant complex.

“I had a lot of contact with American soldiers after the war and I like foreign cultures, so I started getting in touch with the foreign residents here without anyone asking me to,” recalls Endō. “The trigger for that happening all came down to a Vietnamese soccer team.”

In 2006 the complex’s local Vietnamese soccer team was competing in Japan’s soccer league for Vietnamese residents, making it all the way to the playoffs. The venue for the championships just happened to be the grounds at Ichō. Busloads of Vietnamese soccer teams from all across Japan began pouring into the housing complex, and things got a little bit rowdy. Playing on their home ground, the Ichō team won brilliantly, and revved-up young folks began partying in the rice paddies next to the danchi. Right away a fleet of patrol cars were on the scene; nearby residents had called the police to complain.

The person who extended a helping hand to the young athletes in their hour of need was the head of the residents’ association, none other than Endō. “I felt sorry for them,” he recalls, “so I let them use the danchi assembly room. They were delighted, and that started my exchange with our Vietnamese community.”

At the time there was no shortage of friction between Ichō’s Japanese and foreign residents. Disputes broke out over how the foreigners put out the garbage, or how loud they were, or even over how some would hang out raw meat on their balconies to dry into jerky. A lot of those complaints wound up being forwarded to Endō. There was even one instance when he was nearly beaten up by a Japanese resident who accused him of siding with the foreigners. In the end, it was a foreign resident who came to his rescue. 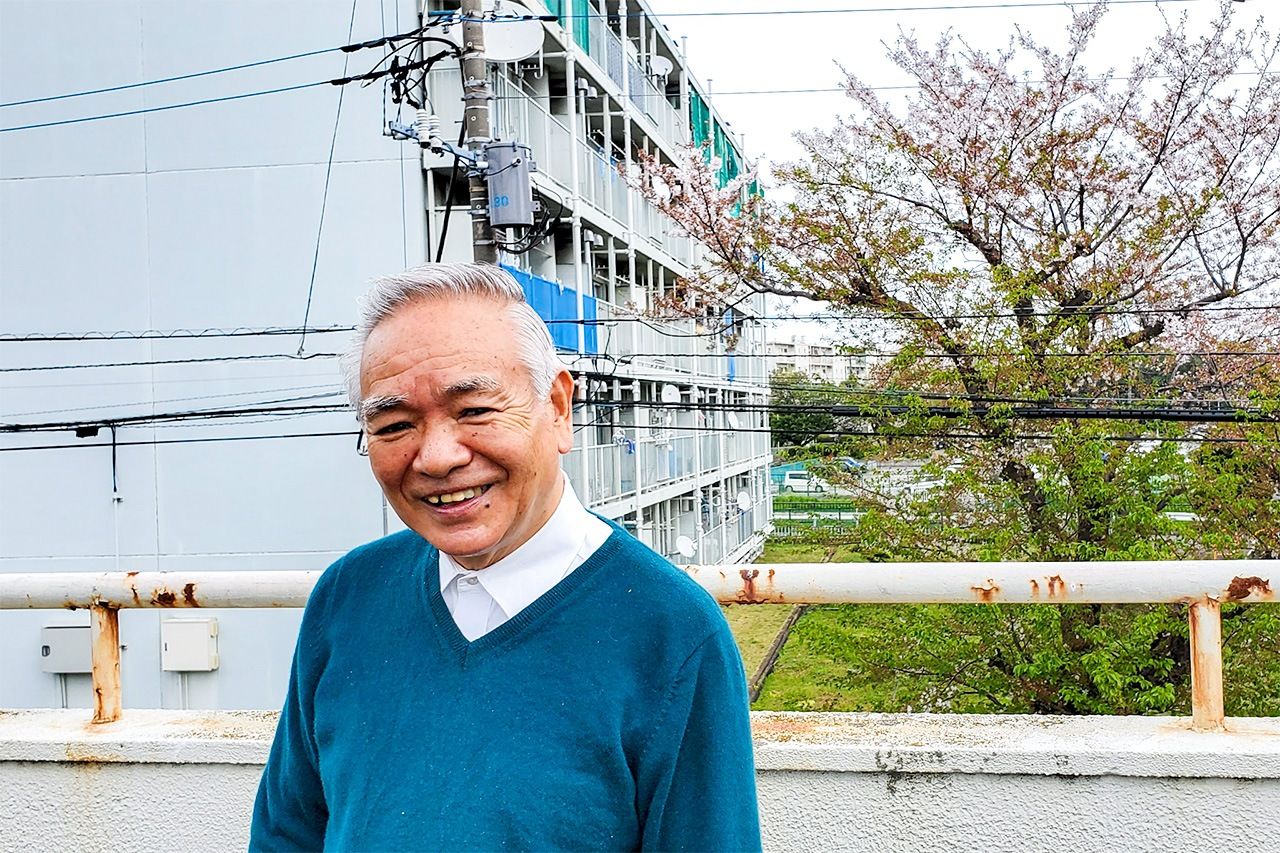 Endō has offered a helping hand to people of many nationalities at the Ichō danchi. The newest problem, he says, is the aging of the complex’s population. (© Kumazaki Takashi)

This was a vast cultural divide to overcome, he thought; and the best way to bridge it was food.

“I thought to myself that we could use food culture as a way to bridge the gaps, and I started organizing cooking classes,” remembers Endō. “That was a big hit. When we held a class on making suigyōza boiled pot-stickers with a Chinese instructor we got fifty Japanese students. There were so many applicants that some people complained that they couldn’t get in. We had a lot of Peruvian residents, too, and at their request I also set up a class on making miso soup.”

At the time there were also danchi residents who complained about the smell of Vietnamese cooking, and Endō found himself run ragged trying to settle these disputes as well. When he visited Vietnamese households, he was sometimes nonplussed by the different scents himself. “This really is intense,” he recalls thinking at the time, but he kept that to himself. Now, he says with a wry smile, “before I knew it I’d gotten used to the different smells, and in time I’ve grown fond of them. Although all that coriander! That’s still something else!”

Vietnamese cooking has now become one of the complex’s local cuisines. At the famous Thanh Ha, I followed up on the beef pho by ordering the restaurant’s popular bi cuon and banh mi.

Bi cuon is a raw spring roll with grilled pork skin inside. The crisp mouthfeel of the skin and the sweet miso with peanut stuffing can get addictive. And then there are Thanh Ha’s banh mi Vietnamese-style sandwiches, a dish increasingly popular around Tokyo as well. Thanh Ha’s banh mi uses thick French bread baked by the proprietress herself, and comes heaped high with veggies and sliced roast pork. It is very healthy, and I could see why so many of Thanh Ha’s female customers order it. 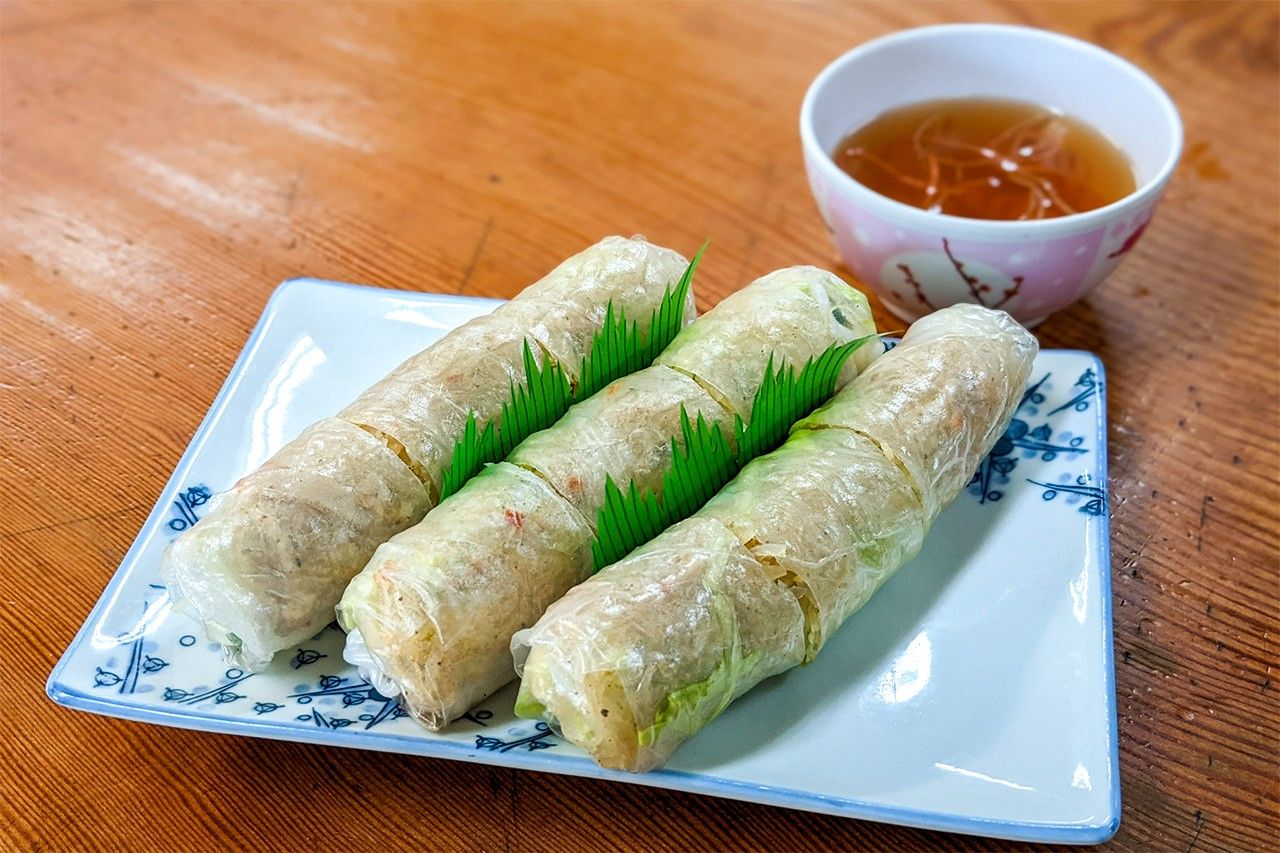 Chatting with Thanh Ha herself, all the while licking my lips over the stream of delicacies, I learn more about her tumultuous life. “It’s 30 years since I came to Japan,” she tells me. “My country changed so much after the Vietnam War. I was living in Saigon, and I had to flee.”

Japan as a Safe Destination

During the 1970s, Vietnam, Laos and Cambodia all became socialist states following years of civil war. Fearing persecution under the new leaderships, those associated with the old regimes and many others sought out new homes. These were the people history remembers today as the “boat people.” Thanh Ha also made her exit, finally reaching the Philippines. There are many people living in and around Ichō today who have similar stories to tell.

“My younger brother and sister are in America and I went to see them,” she tells me, “but I thought it was scary. That’s because Americans have guns. Compared to that, Japan is safe. Japanese people are short and they have black hair like Vietnamese people. I feel comfortable here.”

Around 1990 Japan approved Thanh Ha’s application for a refugee status of residence, and she began living in the Ichō danchi, working herself ragged from morning to night. She waited on customers at a karaoke box, cleaned train station toilets, and worked long hours at a plant where she peeled potatoes all day long. The restaurant she opened 19 years ago with the money she saved by doing that is today’s Thanh Ha. She has even put the two children she had after coming to Japan all the way through college.

“But neither of them can speak Vietnamese,” she admits. “I was always, always working, and I never had time to teach them.”

The restaurant that bears Thanh Ha’s name is the treasure she intends to pass on to her children. But it has also become a place of comfort and relaxation for all her comrades who had to leave their homeland behind and found their way to Japan. 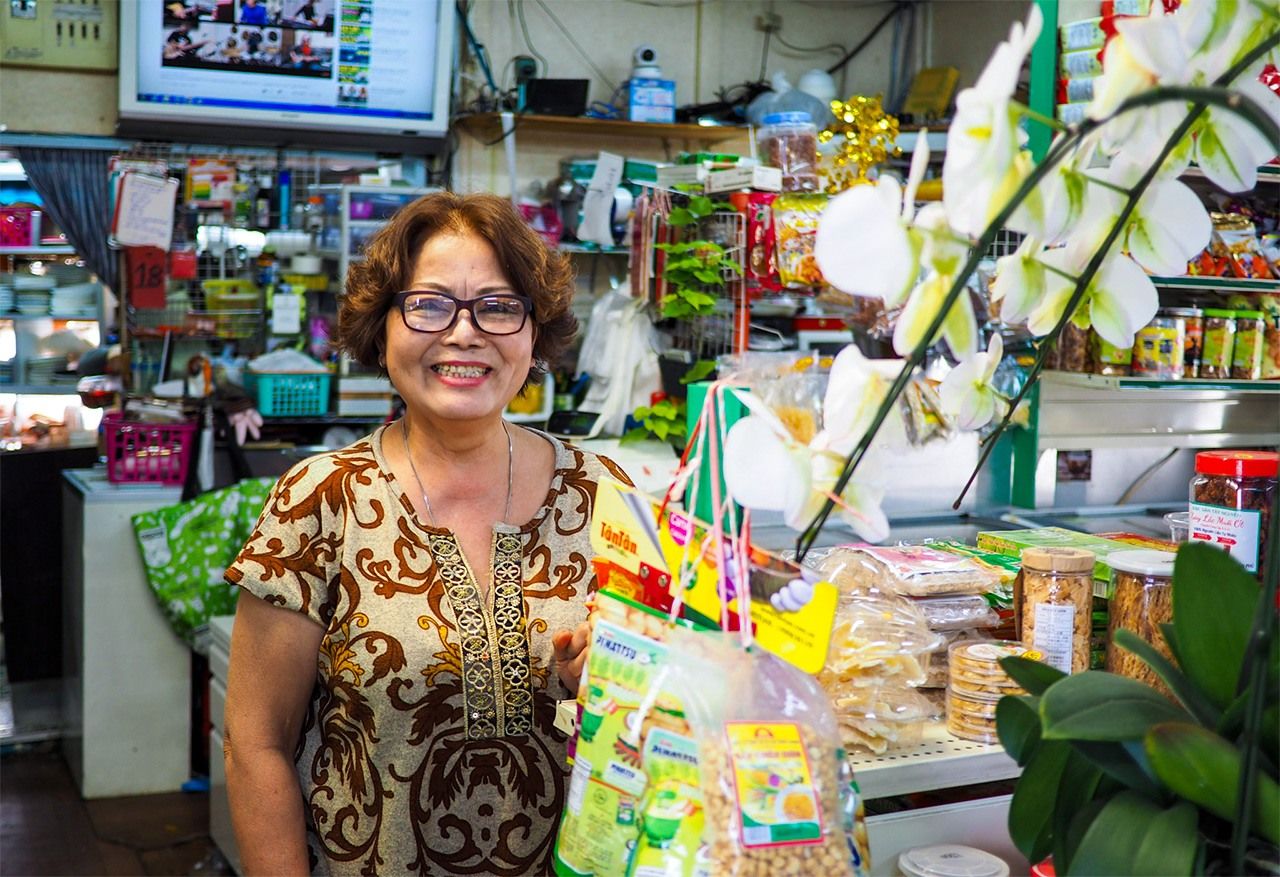 Thanh Ha arrived in Japan 30 years ago and just turned 68 this year. She argues powerfully that the way you greet people is the foundation of human relationships. (© Fuchi Takayuki)

“But you know,” she continues, “now I don’t have as many Vietnamese customers as before. With the pandemic, they have lost their jobs. Even people who used to eat here now just buy groceries to eat at home.”

It seems that COVID-19 has cast its shadow over Ichō as well. Some of Thanh Ha’s compatriots working in nearby factories have lost their jobs. Vietnamese also account for many of the foreign technical trainees now living in Japan, and many of them are facing hard times as well.

Than Ha is no exception. “Everyone is having trouble, and this restaurant and store is struggling, too,” she tells me. “My savings are almost all gone. But even so, my regular Japanese customers support me, so I won’t give up. There are people who call me up just to say, ‘I’m be there as soon as I can, so hang in there for me.’ Other customers send me flowers. For all these people as well, I will be cheerful and keep things going. Because I have my own restaurant and store, I can work. That’s enough to keep me happy.”

Beyond the sliding door of the Ichō danchi Vietnamese diner Thanh Ha lies the flavor of the little people of the world, stoically living out their lives. 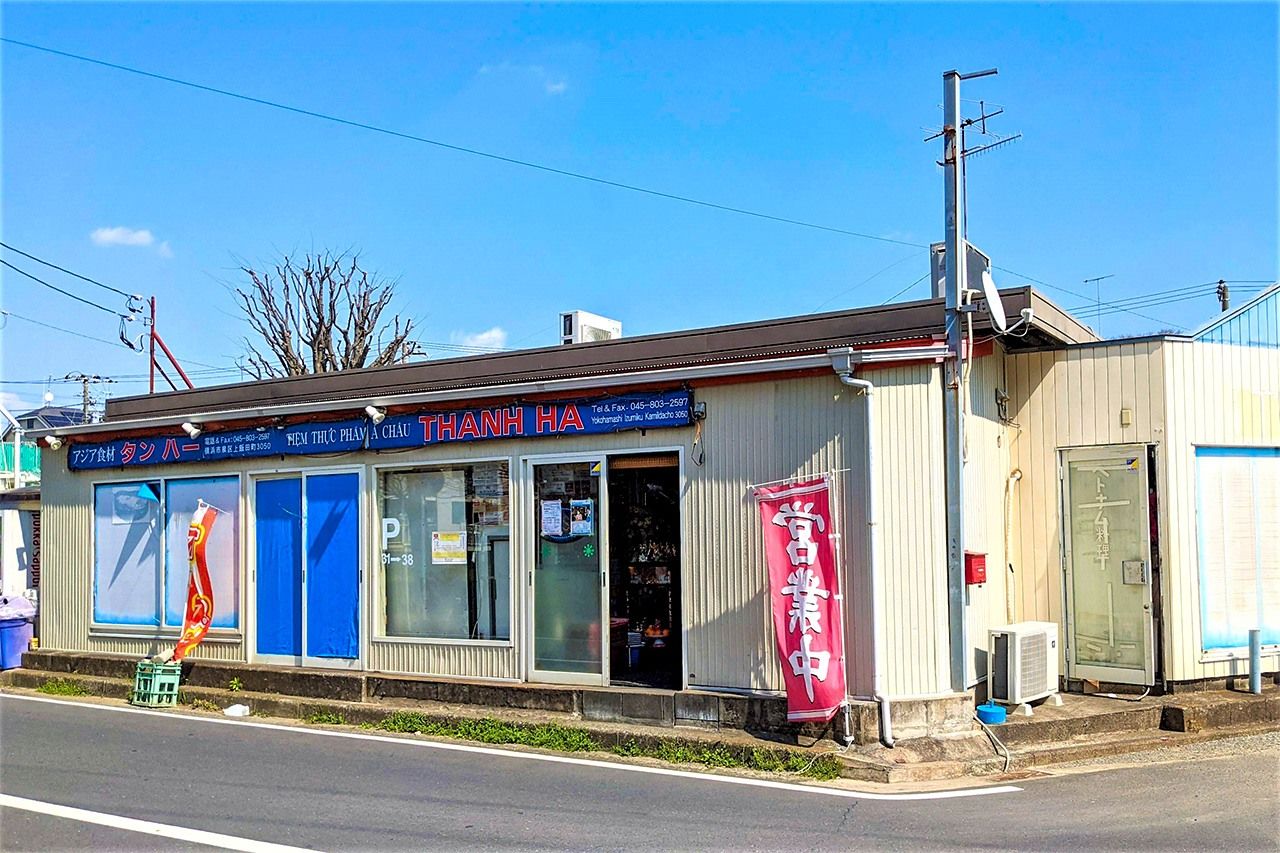