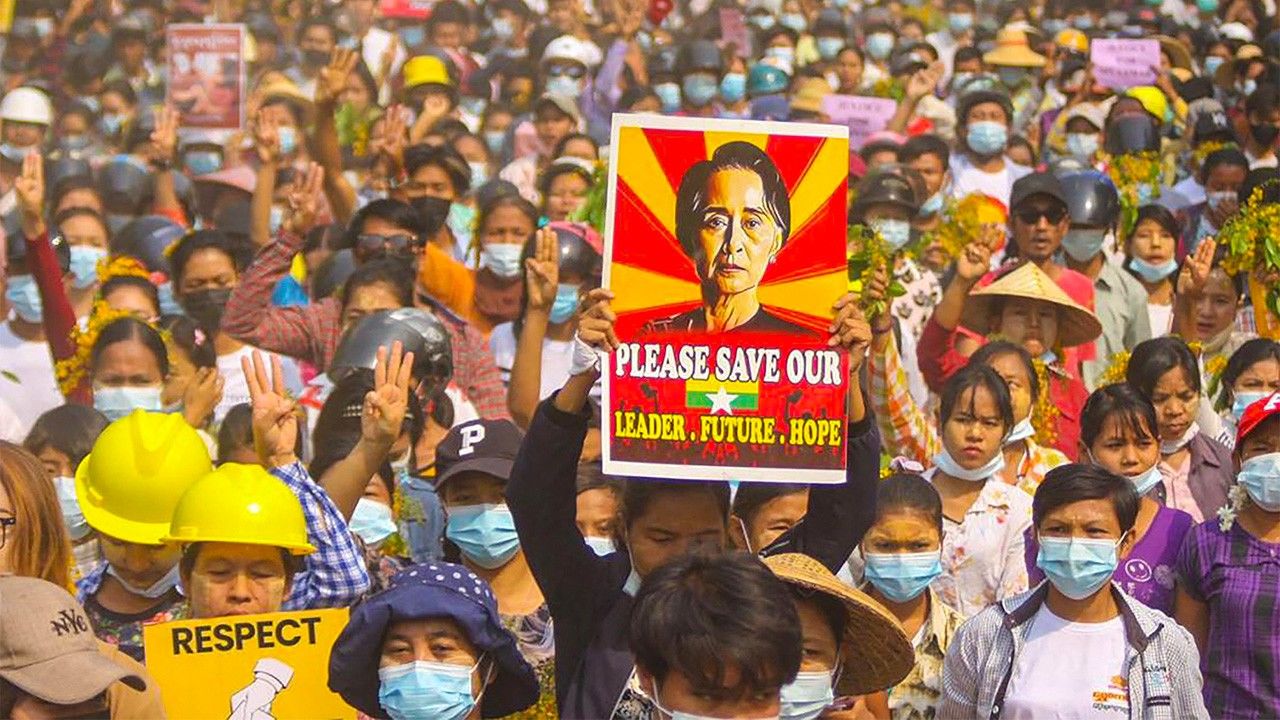 Reports from Myanmar: The People Appeal for Outside Help

World Politics Jun 8, 2021
It has been four months since the February 1 military coup in Myanmar, and the degree of urgency is only increasing. The anonymous author, who has been stationed in Yangon for about three years, tells us about the current situation in Myanmar in two parts—the first delivering the voices of Myanmar’s people.

Outrageous Army and Days of Horror

Aung San Oo once participated in a student riot and has experienced two military coups so far. In this coup, the military and police pointed guns at peaceful demonstrators and used live ammunition; he informs me that two persons were shot dead in front of him. He is angry with the army’s overwhelming deeds, as a fellow Burmese. (The names of all interviewees have been changed to protect their identity and ensure their safety.—Ed.)

“They eliminate peaceful marches, put live ammunition into tax-funded machine guns, and kill their own people with grenades. Soldiers break into houses at midnight to detain residents, then call their families the next day to tell them to pick up the corpse. It’s unthinkable to let them do it. The military is supposed to defend the people, but instead they are perpetrating inhumane crimes against them. For every protestor who is arrested, it costs over 200,000 kyat [around ¥15,000] for their release. This is little more than a ransom demand after a kidnapping.”

“Soldiers have taken people’s donations from the pagoda of the temple Shwe Dagon Pagoda in central Yangon. Not satisfied with that, soldiers have now erected bamboo scaffolds to remove precious jewels from the spire. It makes me feel ashamed as a fellow Buddhist. In this country right now there are a lot of things happening that make you start to doubt your own hearing.”

You can watch many YouTube videos of peaceful protestors being punched and kicked in the violent crackdown. “We fear every day that the devil will knock at our door. It is a fear I have grown up with since I experienced my first coup in 1988,” says Aung San Oo.

Aung San Oo expresses disappointment with the international response to date. “Although the United Nations issued a statement of condemnation statement, more than 700 civilians have already lost their lives. There must be some other way the United Nations can help us.

“I’m grateful for the support the Japanese government has given Myanmar throughout the years. Those of us who are fighting for justice in Myanmar and for universal principles need this support more than ever. We are begging for your help.”

Tha Lin Kyi helps her parents run their restaurants and accommodations in her hometown while working in Yangon on the side. She told me about the increasing daily dangers the people of Myanmar face.

When the mass demonstrations broke out, Tha Lin Kyi was relaxing at home in Yangon and initially considered returning to her hometown ahead of schedule. She instead decided to join the residents in the area who had begun banging their pots every evening in support of the protests. She directly witnessed the military crackdown slowly enveloping the neighborhood.

“One day, when young demonstrators fled to the street in front of my house, a violent terrorist group called a security force fired tear gas from behind, and smoke flowed up to the sixth floor, where I live. After that, I started to hear frequent gunshots nearby and it felt dangerous, so I decided to evacuate to a friend’s house in the suburbs of Yangon within the next few days. This time, violent crackdowns began, and nearly 100 residents were killed by self-proclaimed security forces in one day. At night, when I saw the fiery gunfire and the burning flames up close, I was very angry and sad.” 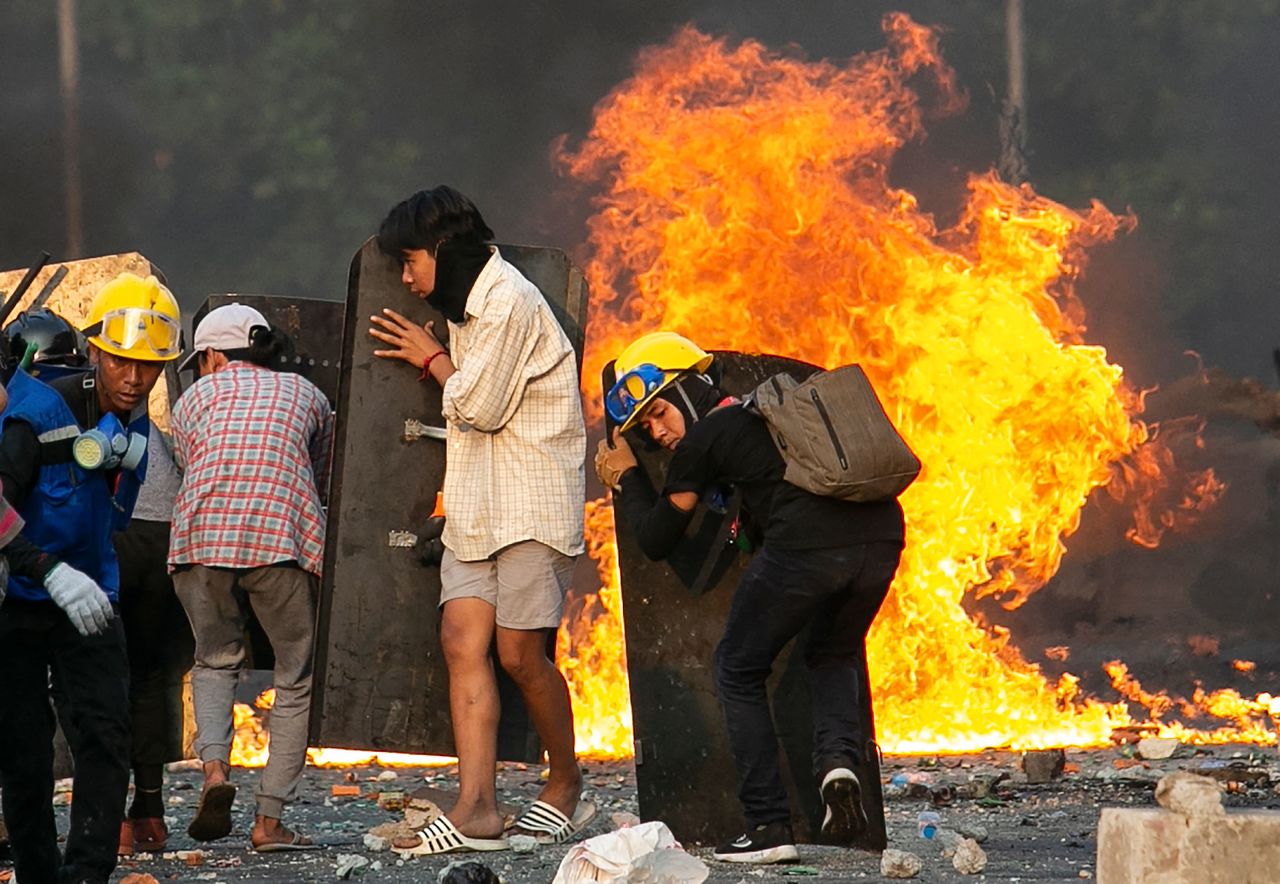 A protest group shields themselves from fires on a Yangon street on March 16, 2021. (© AFP/Jiji)

Tha Lin Kyi could not leave the residential area where she had taken up shelter for days because of the danger presented by the security forces camped out around the area’s gateway. After becoming confident of her safety, she began preparing for her long-desired hometown return. As domestic flights were not operating, Tha Lin Kyi decided to take a minivan that served as a long-distance bus. However, she felt danger even at the bus terminal.

“The person in charge of the bus had an unsavory appearance, unlike anyone I had seen before. There were also several men on the bus with suspicious demeanors. Something didn’t feel right and so I started to leave. I was relentlessly told to get on the bus, but eventually was able to escape by quicky grabbing a taxi coming the other way.”

Tha Lin Kyi got taken care of for a while at a friend’s family’s house but went to the airport the morning after the announcement of the resumption of domestic flights. As the armed forces were not used to dealing with airport terminal check-in procedures, a long line formed at the airport. Tha Lin Kyi nevertheless managed to board the plane for her hometown in time and arrived safely at her parents’ house.

Communications Restricted Even in Quiet Towns

Even in Tha Lin Kyi’s parents’ town there were large-scale demonstrations. There was no violent crackdown, however. This is likely because it is a community home to many military personnel and civil servants. While pot banging and demonstrations were also not so common here, more than 10 people were killed in a massacre by security forces in a larger town nearby.

“Currently we have few people staying in our accommodations as COVID-19 continues to limit travel from large cities. Local regulars sometimes visit our restaurants. As we are a little far from the center of town, you can still use the internet here. It seems that many customers come here just to get online, as mobile internet services remain blocked in other parts of my hometown.”

A Message for All

Tha Lin Kyi passes on the following message: “I am grateful to those who are interested in the situation in Myanmar and support our people. Strict limits on the internet means that it can be difficult for us to obtain external information, but the voices of support from overseas are reaching us.

“Our struggle is not just one for the people of Myanmar but for all people who yearn for democracy. I will be truly grateful if more and more people overseas take interest in the situation in Myanmar and treat our situation as a problem of their own while thinking about actions to take to help solve it.

“We need to quickly rid the world of anachronistic military forces using dirty tactics, weapons and violence against their own citizens to control them and deprive them of their freedoms. Once we do that, we must strive for all peoples and citizens of every country to equally enjoy safe and secure lifestyles. I truly hope for cooperation from everyone around the world.”