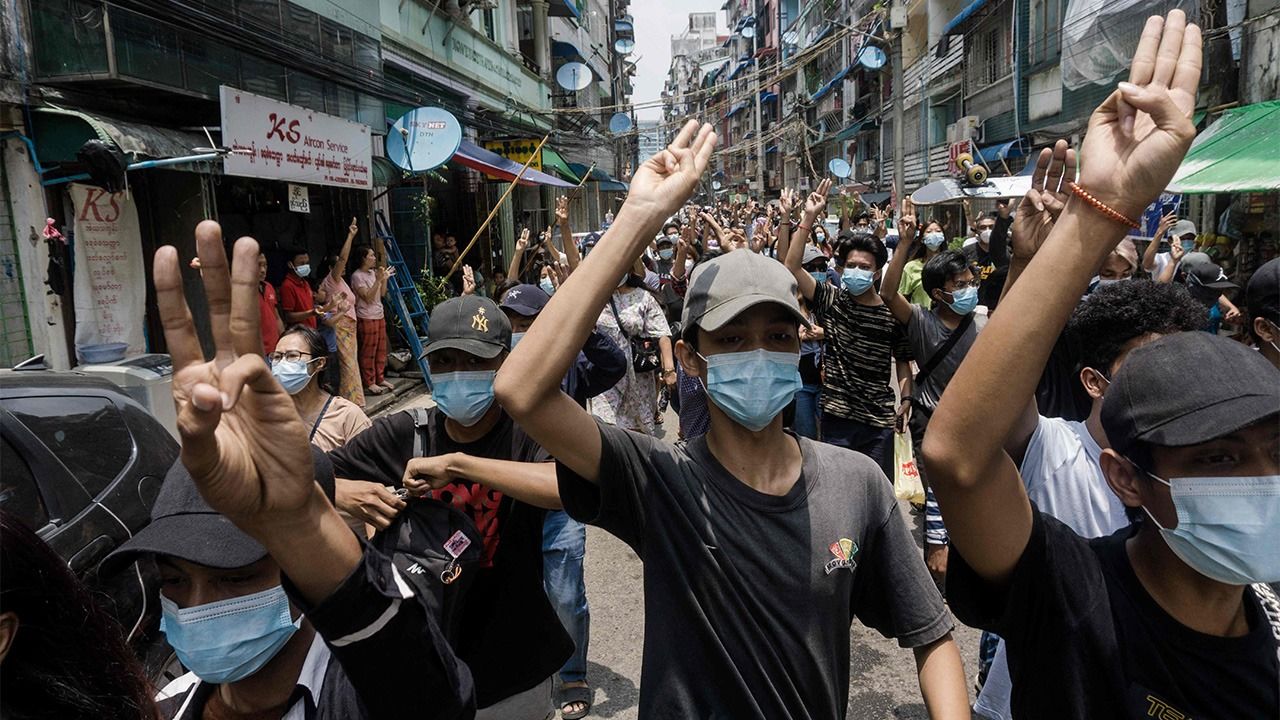 Report from Myanmar: Japanese in Myanmar After the Coup

Global Exchange Politics Jun 9, 2021
A three-year resident of Yangon, writing here anonymously, talked to his network of locals and Myanmar-based Japanese about their experiences after February’s coup d’état. This report, the second of two, focuses on how Japanese residing in Yangon have experienced the coup’s aftereffects.

Many civilians have been caught up in the recent violence perpetrated by security forces in Myanmar. Japanese working with local civic groups have provided first aid and other forms of relief for the injured. As someone with connections to the outside world, I felt that sharing the voices of Japanese residents of Myanmar would be valuable. (The names of all interviewees have been changed to protect their identity and ensure their safety.—Ed.)

Aoki works at a clothing factory and is currently taking refuge in a hotel. He is very appreciative of the help he has received from many of Myanmar’s people during his first overseas assignment on his own. He contemplates what he can give back during this difficult time.

“I have shared openly everything I know with the workers at my factory, including my knowledge on manufacturing methods, sales, financing, and operations. This has enabled a number of employees to set up their own factories and become our rivals; others have taken the skills they have acquired and started working for other companies. Having struck out on their own, however, many have lost employment and are terrified by recent events.”

Aoki says that people are increasingly evacuating to rural areas and many migrant workers have returned to their hometowns.

“Those who cannot evacuate are holding their breath and sitting tight to protect themselves. Many people mutter anxiously about how long they have to live like this—I am one of them.”

Aoki does not hide his dissatisfaction with the situation, but he also recognizes that there are good reasons for Myanmar’s youth to put their bodies and lives on the line.

“By challenging the status quo, the youth are thinking about the future of the country. Despite the difficulty and risk of sending information due to the junta’s restrictions, it is important to let people on the outside know about the real situation in Myanmar. The power of youth can move the country and perhaps even move the world. We must fight indifference to the situation in Myanmar no matter what. The future hopes and dreams of the people of Myanmar depends on it.”

Matsuyama, who runs a company, is also taking refuge in a hotel. From day one of the coup, he has been feeding me detailed information about the ever-increasing tensions in Yangon. Matsuyama learned of the coup d’état and Aung San Suu Kyi’s detention early in the morning from an acquaintance staying at the same hotel. He said the shock he felt was like being hit in the head with a hammer.

“I started up my computer immediately, but both the internet and telephone connections were severed. It was at this moment that I realized that Myanmar was isolated from the rest of the world—like a remote island on land.”

Since he had previously thought that there was only a minute chance of Myanmar returning to military government, Matsuyama could not hide his surprise at the coup having occurred.

He previously witnessed the 2007 antigovernment demonstrations led by Buddhist monks (later known as the Saffron Revolution).

“At that time, I was quite nervous as a Japanese journalist was killed in the Saffron Revolution. Initially, though, I didn’t feel as tense this time. After the coup d’état, large-scale demonstrations spread all over the country, and men and women of all ages turned out to protest. They raised the anti-authoritarian three-finger salute and chanted in unison for the return of democracy. These were peaceful demonstrations peppered with occasional smiles. I started to think that maybe the situation would not seriously deteriorate.”

However, the situation changed suddenly in March following the military’s killing of a female student with rubber bullets in the capital, Naypyidaw. Yangon was soon filled with tear gas shells, live ammunition, and weapons you would normally see on a battlefield—machine guns and even rocket launchers. The number of civilians killed began to rapidly increase soon afterward, reaching over 700 deaths.

“Even though they must be completely shattered, the public continue to use the latest IT to organize demonstrations and communicate with their compatriots all over the world. They are risking everything, every day, in the service of regaining democracy. It can be really painful to see, however, as unarmed citizens do not have a chance of winning against a fully equipped army. You do not often see this kind of bravery and fighting spirit, and it makes you realize just how passionate the people of Myanmar are. What we can do as foreigners is limited, however. As employers of locals, if they want to join the demonstrations, then we have no right to stop them. We can only pray for their safe return.”

Of the 3,000 Japanese in Myanmar at the time of the coup d’état, more than 2,000 had left by May. Unlike the other large Japanese companies that issued orders for their Myanmar-based workers to return home, though, operators like Matsuyama’s company do not have such a choice.

“I’m guided by my own sensibilities fostered over many years of living abroad. While I hope the day will not come, I will evacuate if I judge that things have gotten too dangerous. I’m keeping in mind the saying that ‘every night is followed by dawn’—I hope we will see a democratic dawn again. For now, I will keep my head down and concentrate on the work in front of me!” 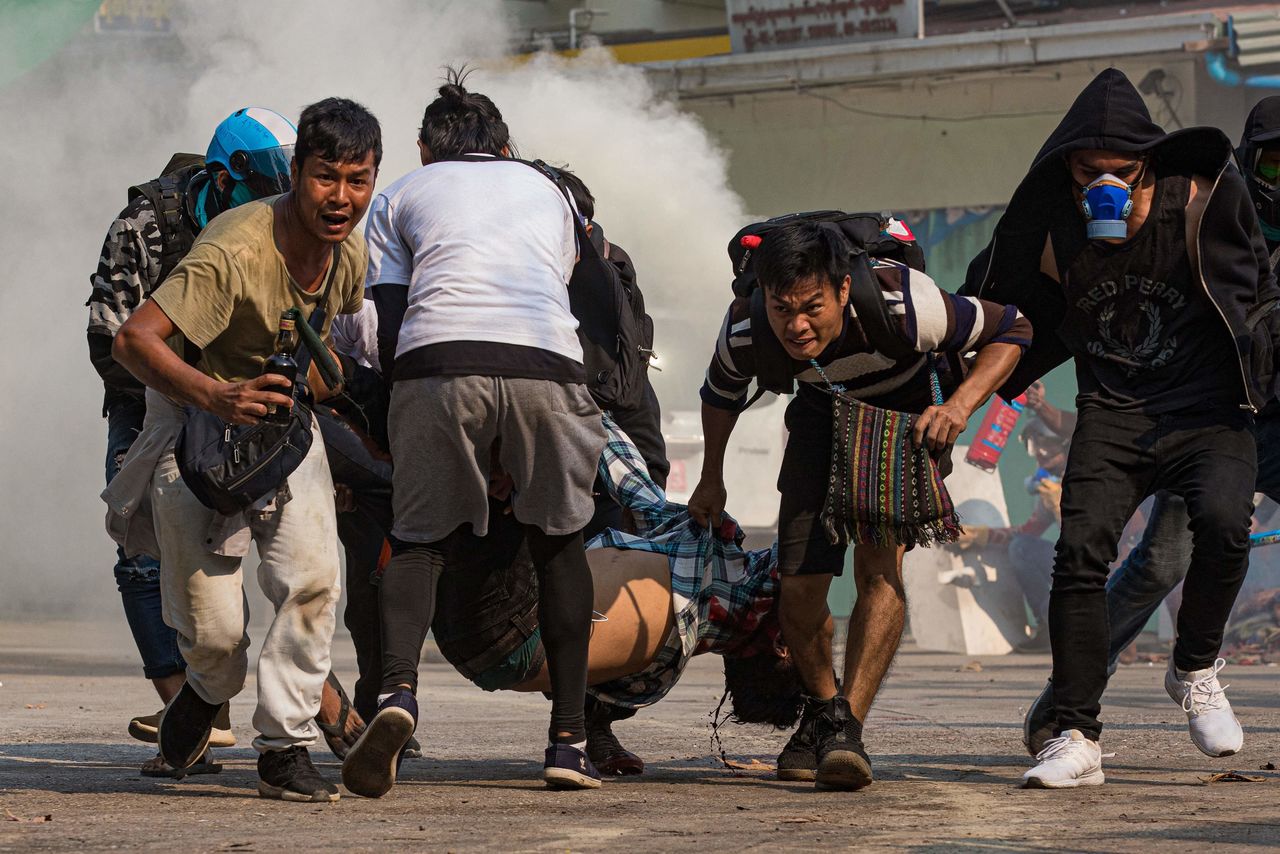 Torii is a businessman raising his children in the Sanchaung township of downtown Yangon. However, Torii moved his family to a hotel for long-term visitors in the central area as clashes between the security forces and demonstrators began to heat up in mid-March.

In Sanchaung, the police rounded up a number of citizens, and the sounds of shooting and the nightly banging of pots in protest by residents became incessant. Like Matsuyama, Torii initially took some comfort in being a foreigner and therefore not a target. But every time he saw an internet video of security forces in Yangon brandishing their guns and aimlessly pointing them at people, he realized that he could no longer take that for granted. Out and about downtown one afternoon, Torii suddenly found himself in a setting where he could not see a single resident—but plenty of police officers.

“As I walked, I became increasingly paranoid about being taken away or accidentally fired upon if I was questioned by the police. That was when I reevaluated the danger posed by being in Sanchaung and decided to move. After arriving at the hotel for long-term visitors, I vividly remember my feelings of relief at being able to let my guard down.”

In Sanchaung, the authorities managed to confine hundreds of demonstrators to a single area. The demonstrations had mostly been suppressed by the end of March as demonstrators either escaped to other areas or were detained. The barricades have been removed, but there are still occasional protests by residents, including tire burnings.

Most schools in Myanmar were already closed or conducting lessons online before the coup d’état due to COVID-19. However, parents still feel a strong sense of anxiety about their children’s safety.

Numerous children have been killed in the violence. In Mandalay, a major city in the center of the country, security forces chasing demonstrators broke into a private home and shot and killed a seven-year-old girl sitting on her father’s lap. A boy was also shot and killed watching a demonstration taking place in front of his own house, while other children have been killed by stray bullets even while inside their homes. The United Nations Children’s Fund (UNICEF) reported that at least five children have died and 500 have been arbitrarily detained as a consequence of the military occupying educational facilities.

Torii, who is currently unable to evacuate abroad, shares his anger at the loss of these young lives. “I can’t help but wonder if children are being indiscriminately targeted. If so, that is exactly what terrorist organizations in Africa have done. Right now, all I can do is focus on protecting my own children.”

Myanmar has attracted attention as Southeast Asia’s final frontier. Although their country is said to be the poorest in the world, Myanmar’s people have a rich spirit of gratitude.

After the Great East Japan Earthquake in 2011, I spent two months in the Tōhoku disaster area engaged in reconstruction activities. I remember at the time feeling moved by the toughness of the members of the Self-Defense Forces as they undertook their duties. But it was also a painful reminder of my frustration that, in Myanmar, it always seems like the army’s gun is aimed at its own citizens and not foreign enemies.

I wish there was something I could do for Myanmar. I am constantly thinking about what else I might be able to do to help.