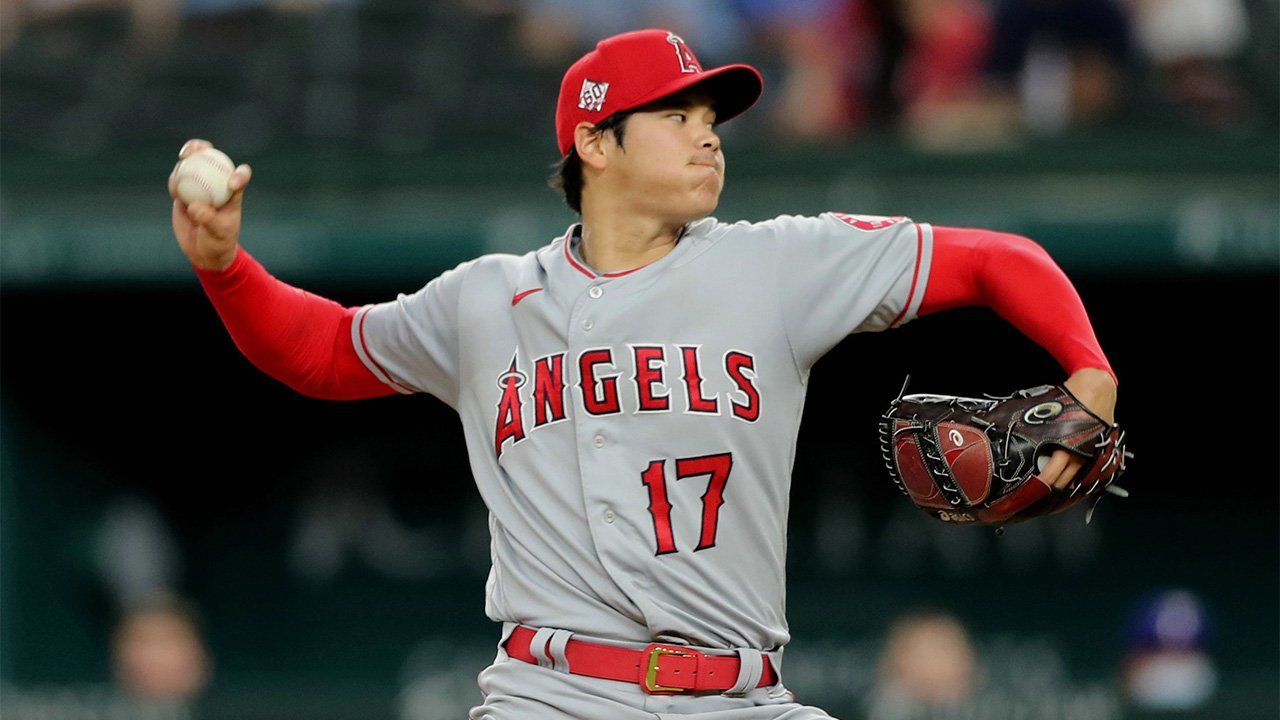 Sports Jun 4, 2021
Japanese baseball star Ohtani Shōhei joined US Major League Baseball with a reputation as a two-way player. His first few seasons have been marred by injury, but now in his fourth year with the Los Angeles Angels, Ohtani is in prime condition and is wowing fans and media alike with his exploits on the mound and at the plate. A US-based reporter reviews his recent performance.

Ohtani Shōhei lived up to his reputation as a genuine two-way player in his first pitching start of the 2021 Major League Baseball season on April 26. After a shaky first inning in which he gave up three hits and four runs, the Los Angeles Angels pitcher found his control against the Texas Rangers side, retiring 14 of the next 15 batters he faced, nine by strikeout, in a commanding five-inning outing.

His performance at the plate was equally impressive. Ohtani had two hits in three at-bats, including a clutch, second-inning double. He knocked in two RBIs, and scored three runs, helping propel himself to his first major-league win since May 20, 2018, against the Tampa Bay Rays 1,072 days earlier.

Ohtani took the mound tied for the most home runs in the MLB with seven, making him the first player since Babe Ruth of the New York Yankees in June 1921 to make a pitching start while leading the major leagues in homers. Ohtani’s pitching mirrored that of Ruth, who on that historic occasion a century earlier came away with a win after giving up five hits and four runs in five innings.

Ohtani’s prowess in playing both ways is truly on a par with the legendary Ruth, although it is a comparison the Japanese star prefers to play down. Speaking to the media after the April 26 game, Ohtani, whose nickname is “Sho Time,” confessed that he was thrilled to be compared to Ruth, but insisted that the only parallel he could draw with the past is a desire to make a stronger showing on the mound. “My aim is to pitch five or six scoreless innings,” he said. “I was fortunate to win this time around, but I want to keep improving.” 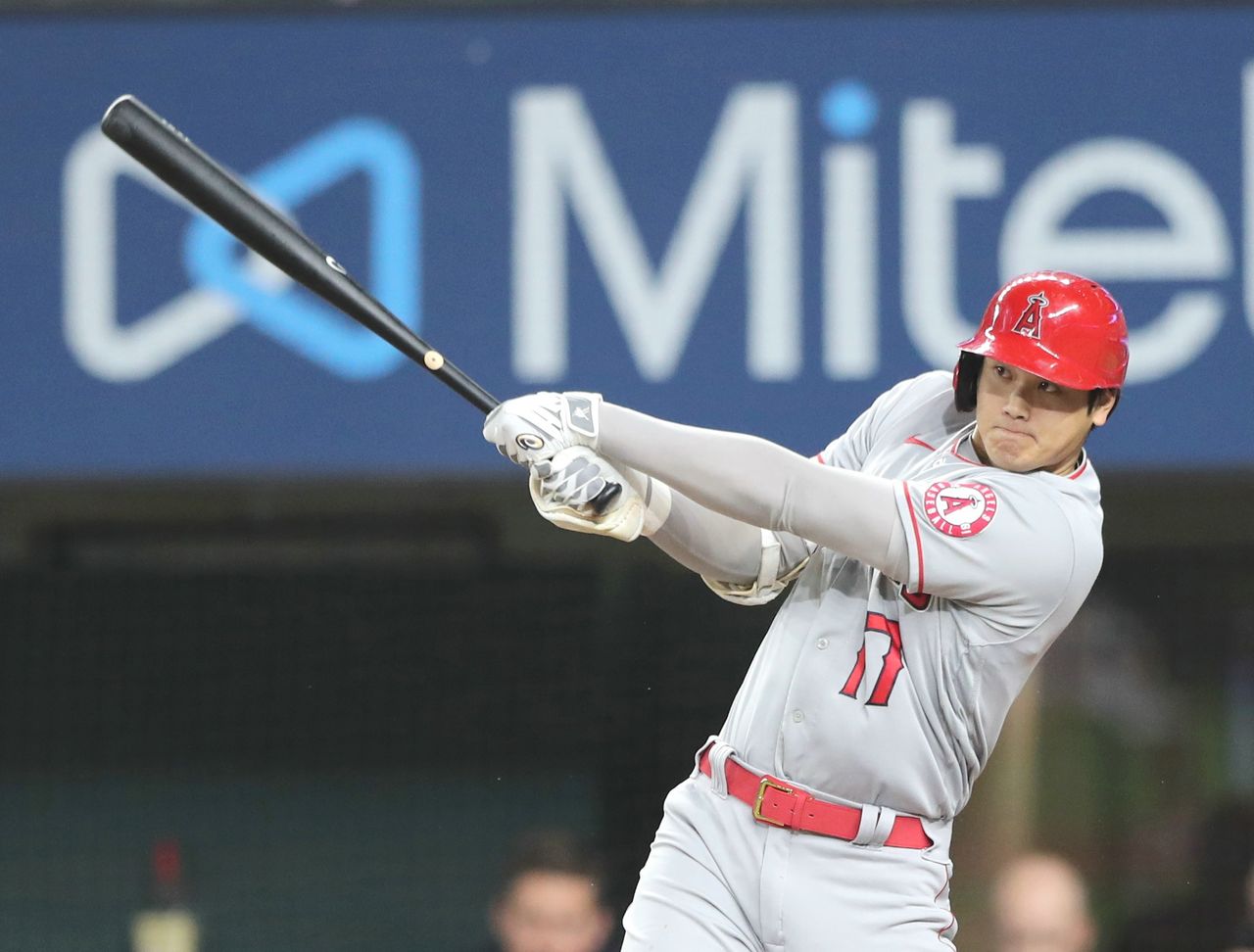 Ohtani Shōhei shows off his hitting ability by smacking his tenth home run in a game on May 6 to again tie as MLB leader. (© Jiji)

All Eyes on Ohtani

US media outlets have closely followed Ohtani’s exploits. The Associated Press described the Japanese pitcher’s performance against the Rangers as “a big league start like none since Babe Ruth a century ago,” while the MLB official website and broadcaster CBS both claiming that Ohtani had “made history.” The Los Angeles Times described his performance after giving up four runs in the first innings as going “from disaster to magnificent.”

He also drew praise from his fellow players and opponents, who know first-hand the level of competition in the major leagues. Following the defeat, Rangers manager Chris Woodward did not hide his astonishment, describing Ohtani as “just amazing” and saying that he is the only big-league player who is able to convincingly play both ways.

However, the highest praise came from the players themselves. Ohtani’s former teammate Albert Pujols of the Los Angeles Dodgers, who has all but stamped his ticket to the US Baseball Hall of Fame with 3,000 hits and 600 home runs over his career, declared that “I can’t believe how far he’s come.” Angels catcher Kurt Suzuki praised his rare talents, describing him as an “incredible athlete.” 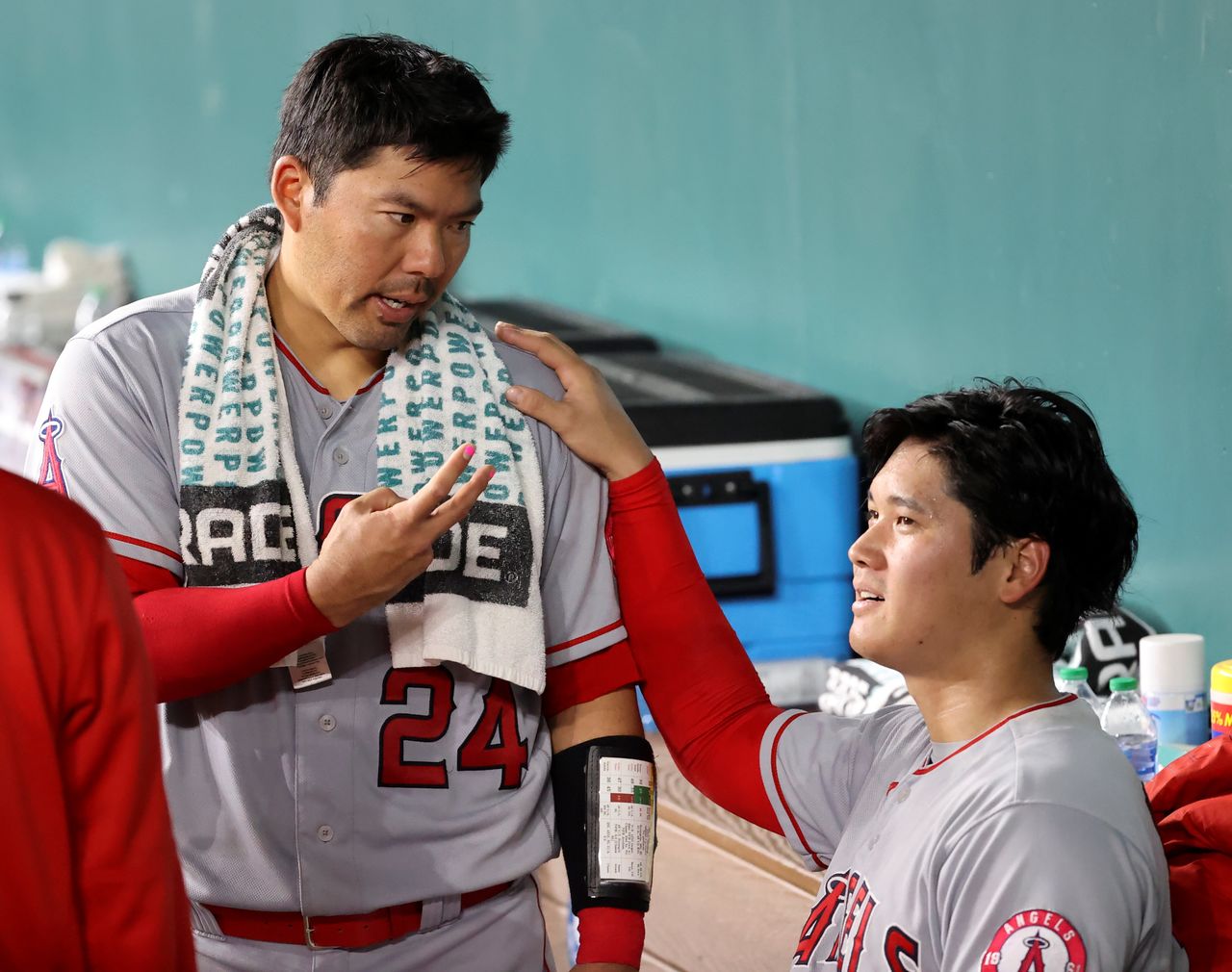 Ohtani, right, chats in the dugout with teammate Kurt Suzuki, a fourth-generation Japanese-American whose grandfather was from Nagoya. (© USA Today Sports/Reuters/AFLO)

Recognition of Ohtani has also shot up among American fans of the US “national pastime.” New footage and other information posted on the MLB official website draws gushing comments praising his playing and how entertaining he is to watch. Footage of him apologizing to the catcher after striking him with a foul tip and saying sorry as he jogs past a batter whose line drive he had just snagged earned him a reputation as a polite player, only increasing his popularity.

Like sports venues around the globe, Angel Stadium in Anaheim is still restricting spectator capacity due to COVID-19, but there is little doubt that once the pandemic subsides, fans will come out in force to watch Ohtani play. He is sure to become a regular fixture in the All-Star game, with his jersey and other merchandise becoming hot items.

Ohtani’s reputation as a two-way player was met with a degree of skepticism when he signed with the Angels in 2018. In the major leagues, players might be known for serving up sizzling fast balls or smacking tape-measure homers, but it is almost unheard of to be proficient in both departments, as Ohtani is. People scoffed at the idea as something that might be possible in Nippon Professional Baseball, but not the MLB.

However, it was his batting that propelled him to Rookie of the Year honors in 2018 after he withdrew as a pitcher mid-season due to a tear in the ulnar collateral ligament of his right elbow. Following undergoing Tommy John surgery in the off-season, he devoted himself to batting in 2019, but in September, surgery to repair an issue with his left kneecap sidelined him for the remainder of the season. In 2020, he returned to the mound for two games, but only managed to record a loss before pain in his right elbow again knocked him out of the pitching roster. He struggled with his bat as well, managing a meager, 190 batting average while hitting just seven home runs and 24 RBIs.

Nevertheless, Angels manager Joe Maddon has maintained his faith in Ohtani’s potential as a two-way player. The star’s lackluster performance in 2020 was in part due to the fact that he was still recuperating from surgery and that the COVID-19 pandemic limited his opportunities to train. As a result, Maddon used Ohtani selectively, biding his time until the Japanese star was in better condition.

Then came the 2021 season, with Ohtani joining the Angels spring training camp in tip-top health. In March, Maddon, who had monitored Ohtani’s condition daily, gave him opportunities on the mound and at the plate in preseason games. For the previous three years, there was an understanding that he would rest the day before and after pitching, but these restrictions were rescinded. The designated hitter restriction for pitching days was also lifted, and he was tried out as lead-off and second batter in preparation for the regular season.

In his fourth game of the season, on April 4, against the Chicago White Sox, Ohtani made history by becoming the first starting pitcher since 1903 to bat second in the lineup. After throwing a scoreless first inning, he swatted a huge home run into the center-right stands in his first at-bat. Although, he missed out on being the winning pitcher, Ohtani marked the start of a new bid to capitalize on his full potential.

Ohtani had a stellar performance on the mound in a May 11 game against the Houston Astros. He had to settle for a no decision again, but allowed only four hits and one run and fanned ten batters in seven innings, improving his earned run average to 2.10. The game also marked his start as a true two-way player by putting him past the requirement of a 2020 rule that stipulates a pitcher must accrue at least 20 innings pitched and 20 games started as a position player in order to remain in the lineup after leaving the mound.

Maddon is obviously betting on Ohtani’s pitching and hitting to help the Angels win a title, calling the Japanese star’s play “entertaining to watch” and “packed with energy.” 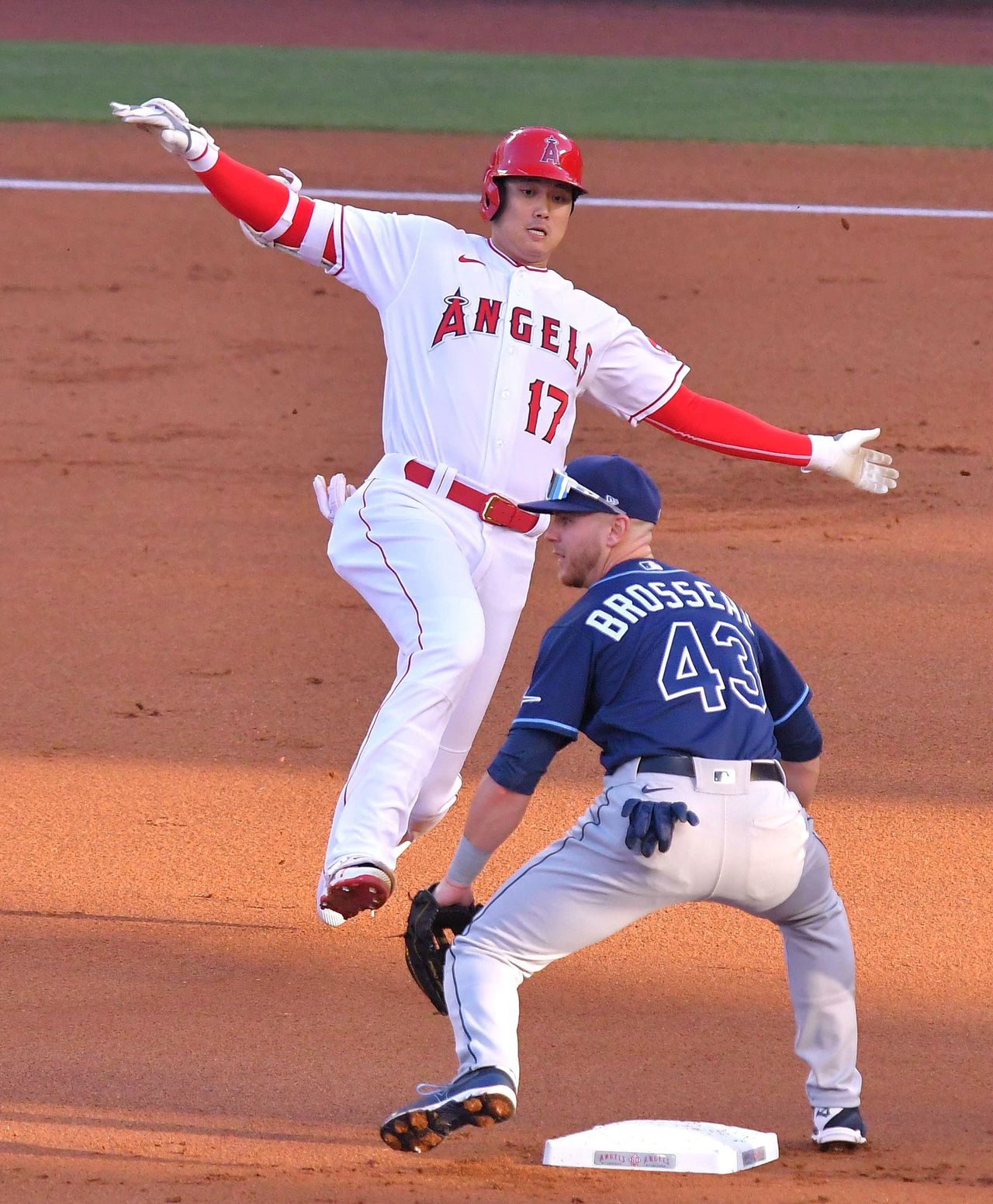 In addition to pitching and batting, Ohtani is a shrewd base runner despite his 193-centimeter stature. (© Jiji)

Secret to this Season’s Form

Ohtani explains that confidence in his physical condition helped with his favorable start to the season and that his more aggressive stance at the plate has also produced great results, including eight home runs in April and seven in May. Last season, he swung at the first pitch only around 29% of the time, but in April, he increased this to 45%. Up to May 12, he scored eight out his ten home runs on the second pitch. This new determination to always hit a good ball is paying off in home runs.

With anxieties about his left knee resolved, Ohtani’s pitching form has stabilized. The course of his fast ball has improved as has the sharpness of breaking ball, much to the dismay of batters.

Some say the comparisons with Ruth are premature as Ohtani has yet to play a full season as a two-way player. While there is no guarantee that he can keep up the pace into the fall, when the long baseball season starts to take its toll, Ohtani is determined to take things as they come. He remains cools and does not seem overly concerned whether he can live up to the expectation surrounding him, saying that “I strive to do my best in my own way. It doesn’t feel like work to me.”

Kuriyama Hideki, manager of Ohtani’s old team the Hokkaidō Nippon-Ham Fighters of the NPB, described his former player as a “baseball rascal,” comparing his all-rounder play to a kid in the little leagues. This is an apt comparison as there is no doubt that Ohtani’s youthful cheer and enthusiasm for the game is inspiring a new generation of aspiring baseball players today.