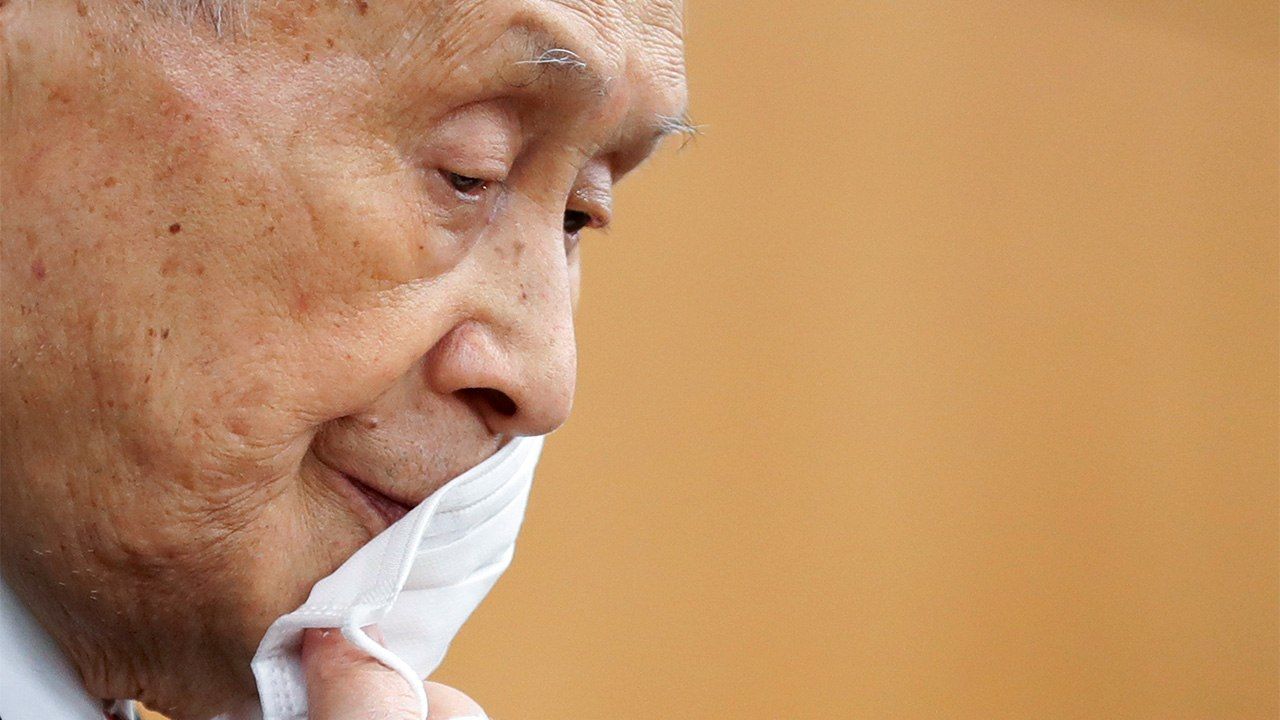 Course Correction: How Mori’s Sexist Comment Shows Change Is Needed at the Helm

Politics Society Family Work Jun 10, 2021
The sexist comment that drew a storm of criticism for former Prime Minister Mori Yoshirō and led to his resignation as head of the Tokyo Olympics and Paralympics organizing committee was a symptom of the regressive reluctance at the top of Japan’s society to make use of the country’s full human potential. Professor Muta Kazue argues that opposition to diversity comes primarily from the desire to hang on to power.

“The sports ministry nags about increasing the number of female members, but meetings with lots of women drag on for ages.” In February 2021, Mori Yoshirō’s comment as head of the organizing committee for the Tokyo Olympics and Paralympics, delivered during a meeting of the Japanese Olympic Committee, drew a storm of criticism. He resigned the following month.

Incidentally, the former prime minister’s comment was reacting to requests from the Ministry of Education, Culture, Sports, Science, and Technology (MEXT) to increase the share of women in leadership positions to at least 30%. This is a government target under the Basic Act for Gender Equal Society; the initial deadline of fiscal 2020 was set back to “as early as possible during the 2020s.” Both the organizing committee and the JOC fall under MEXT jurisdiction, so naturally they must follow their rules.

After lambasting the government policy as nagging inefficiency imposed from above, Mori added, “Women are very competitive. If someone puts her hand up, the others seem to feel they have to say something too, and everyone starts speaking.”

It is unclear whether the increase in women in committees attended by Mori actually led to longer meetings or whether that was just his personal impression. However, if his general belief is that “women open their mouths despite knowing nothing,” undoubtedly he would have been bored at what must have seemed (to him) to be lengthy remarks.

Even if female members did speak frequently, there is nothing strange here. MEXT’s “nagging” about the 30% target is based on the idea that there is a limit to what can be achieved by having only men of similar ages and professional backgrounds make decisions, and that diversity is needed for Japan’s institutions and society to keep moving forward. This is not an idea originated by Japan’s government; it is already accepted around the world. From this perspective, the women who proactively speak at meetings are filling their expected roles and contributing to their organizations. To have that seen as useless or showing off must be quite wearying. Indeed, subjected to such complaints, they might wonder why they were appointed.

Whether intended as lip service, Mori also said, “We have women in the organizing committee, but they all know how to act.” In other words, he positions the female members of the committee as merely decorative, and subservient to the existing culture. What impertinence!

Even after the storm of criticism that forced his resignation, Mori probably only pondered to himself whether what he said was really rude to women, and may not have understood why it became such a big issue. However, he was not the only one who failed to grasp its significance. JOC President Yamashita Yasuhiro and the many others present at the meeting did not seek to refute what Mori said, and there was also apparently laughter. I imagine some attendees must have judged it an unfortunate remark, but it is likely nobody thought that its impact would grow to the point where the JOC could no longer ignore it.

After the comment was reported and criticized for its sexism, Nakanishi Hiroaki, then the chairman of the business lobbying organization Keidanren, supported Mori by saying “I think this is what Japanese society really thinks,” exposing his own lack of understanding by going on with: “It’s frightening how quickly criticism can spread on social media.” Online commenters questioned whether the remark was really worthy of such censure and defended Mori from “bullying,” showing how deeply rooted this kind of anachronistic disdain toward women is.

Japan appears toward the bottom end of the ranking in the Global Gender Gap Report each year (it was 120th out of 156 countries in the latest ranking released at the end of March 2021). It shows notably little progress toward gender equality compared with other industrialized democracies, and prejudice will not go away. This is despite more than 30 years having passed since Japan ratified the Convention on the Elimination of All Forms of Discrimination Against Women, which was initially adopted by the United Nations General Assembly in 1979.

The document identifies stereotypes as a cause of prejudice, and is groundbreaking in saying they should be eliminated, but how many politicians and executives understand this? An optional protocol to the convention was adopted by the UN General Assembly in 1999 to make it more effective; individuals from countries that have ratified the protocol can complain about violations of the convention directly to the UN Committee on the Elimination of Discrimination Against Women. While more than 100 countries have ratified it, Japan has yet to do so.

Domestically, although the Act on Promotion of Gender Equality in the Political Field was finally passed in 2018, there is still a long way to go to a quota system that would require a certain proportion of female candidates or seats in a Diet election. Recently, a cross-party group of lawmakers tried to bolster the legislation through an amendment whereby parties would have to ensure a certain proportion of their candidates were female, but abandoned their efforts in the face of opposition from the Liberal Democratic Party and others.

Obstacles also remain to allowing married couples to maintain separate surnames. The UN CEDAW body had repeatedly urged amendment of Japan’s Civil Code, which forces husbands and wives to share the same surname, and more than half the population—or more than 70% in some age groups—supports the move. However, entrenched resistance means no progress has been made. I could give endless examples of such cases where the way ahead is blocked by the power of the ruling LDP, centered on elderly men and “hereditary lawmakers” who pass seats down, most often from father to child. There are also some female lawmakers who, as long as they are given a degree of prominence, are content to merely toe the party line, and even at times to bear the standard of their party’s reactionary views.

In the movement to change Japanese society, it cannot only be me who is utterly fed up with the stubborn resistance of the powers that be. By opposing the advancement of diversity and refusing to give positions to women, who make up half the population and can actively contribute, they are wasting a great deal of human potential. But this kind of logic is meaningless to them.

Those who want to stomp on buds of change that would lead to gender equality in many areas of life do so because they aim to maintain the present social order. For example, when wondering about the motives of those firmly opposed to married couples being able to choose to have separate surnames, I often hear people say, “If it’s optional, couples will still be able to take the surname of their partner like before, so I don’t know why they’re against it.” But this is to misunderstand the crux of these opponents’ position.

Under the present system, where married couples must have the same surname, in 96% of cases they take the husband’s. Naturally, the man’s name is written at the top of the family register, and he is designated as the head of household, responsible for his wife and children. The COVID-19 relief payments for all family members were thereby effectively paid mainly to male heads of household. Those who oppose separate surnames want to ensure that all families across Japan fit into this system. They believe that surnames must not be the thin end of the wedge that leads to the collapse of the male-centered family as the basic unit of society. They may well also be anxiously imagining how such a change would affect them personally: “What if my son’s wife or my wife wanted a different surname?” “How would this affect my nursing care?” “Who’s going to tend the family grave?”

In brief, those who have power under the present social order use all of that power to block any changes that would undermine it. They deploy the money and influence they currently monopolize to its full extent in trampling opposition. I myself am currently fighting a court case against baseless slander from LDP lawmaker Sugita Mio that I invented source materials and misused grant money in joint research into the questions of the “comfort women” and sexual violence. At first, I was puzzled as to why I was being targeted to such an extent, when I am not a big-name researcher. But I think that under the former Abe Shinzō administration, historical revisionism entered the mainstream of politics, and any research or researchers that question government policy began drawing fire in an attempt to make an example of them.

Telling those who want to hang on to power that failing to implement diversity would lead to Japan falling behind in the world is like talking to a brick wall. The country is already dropping back to some extent, but for them it is no problem as long as the present social order survives with its “unique” traditions: imperial succession that passes only through the male line, wives forced to take their husbands’ surnames, and families where the men are always in control and the women know their place. Japan and the imperial family may thereby go to ruin or decline, but that is a secondary matter to them.

Yet, there cannot be that many of them bent on killing themselves through riding on that Titanic. The rich and powerful will undoubtedly get out as soon as the ship starts sinking. It will be the masses of passengers in the cheap steerage berths who drown. No light and little reliable information comes to the lower decks, but we can still gain a clearer picture of the true situation, and although we are not as strong as them, we are not entirely powerless. We can escape the sinking ship, and if enough time remains, we can surely gain control of the rudder and set a new course.