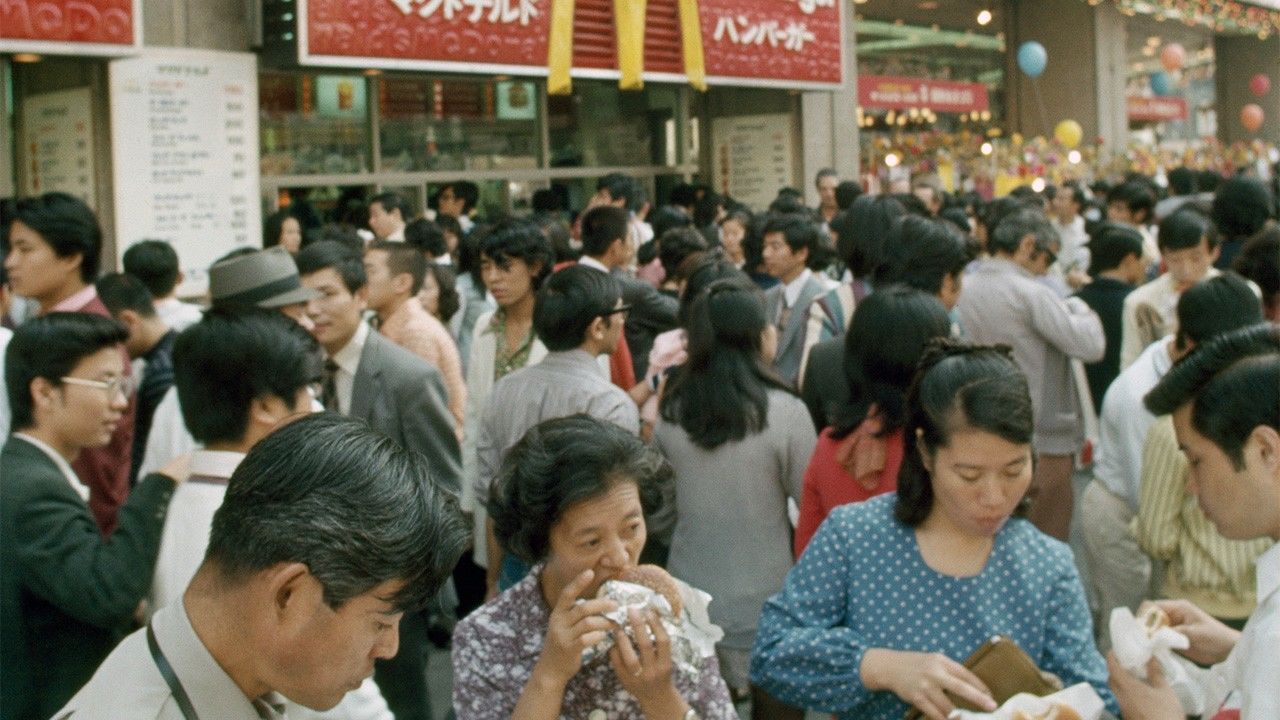 McDonald’s Japan at 50: The Highs and Lows of its First Half-Century

Economy Society Food and Drink Sep 17, 2021
This year, McDonald’s Japan turns 50. While the COVID-19 pandemic has devastated Japan’s restaurant sector, McDonald’s has benefited from demand from consumers who are staying home, and posted record sales of ¥589 billion in the 12 months to December 2020. Former employee Gene Nakazono remembers the early days of the restaurant chain. 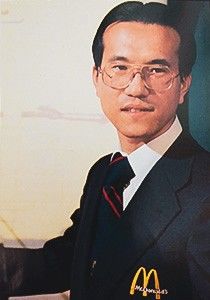 Born in Osaka in 1949. Joined McDonald’s Japan in 1973, remaining with the company until 1990, when he relocated to Australia with his family, obtaining citizenship in 1997. From January 2016, he has published 20 books, the latest of which is titled Fujita Den kara osowatta okane to jikan no fuhen no rūru (Universal Rules of Time and Money I Learned from Fujita Den).

These days, McDonald’s restaurants are a familiar sight all over Japan. The first opened on July 20, 1971 in the Ginza branch of the Mitsukoshi department store. Gene Nakazono was a university student at the time. He would begin working for McDonald’s Japan two years later.

“I was rejected for all of the media jobs I applied for”, he recalls. “I was thinking about where to go from here when I saw a position at McDonald’s advertised at university. I decided to interview for the position. I knew about the company from having seen and visited many McDonald’s in the places I passed through while cycling across the United States as a student.”

That first branch in Ginza made waves, but while the chain went onto open more outlets in Shinjuku and elsewhere, it remained relatively unknown. Hamburgers themselves had yet to gain currency in Japan.

“The McDonald’s business is all about the restaurants. Shortly after joining the company, I was posted to the Umeda Hanshin, Osaka, and Kobe Sannomiya branches. Business was very slow, despite the restaurants’ busy commercial locations. Most people had never heard of McDonald’s.”

However, it was not long before business picked up.

“In those days, McDonald’s tended to hire smartly dressed young women to work in its outlets, and the efficient way they carried out their duties was appealing to see. Over time, the restaurants were frequented by more young female diners, who in turn attracted male diners.”

Five years after Nakazono joined McDonald’s Japan, the company began expanding rapidly. He was sent to manage the Makiminato restaurant that opened in Urasoe, Okinawa, in 1976, where he was responsible for posting an amazing turnover.

“This was four years after Okinawa was returned to Japan, and there were around 200,000 US Army personnel on the island at that time. After we put up a ‘McDonald’s Opening Soon’ sign on the site, Americans would come by on a daily basis asking us when the restaurant would open. On February 1, the day of the grand opening, a long line formed outside, so we decided to open early. It was chaos—the crowds were unbelievable. We made ¥3 million in one day, setting a world record for a McDonald’s opening. The outlet continued to do a roaring trade for some time, also breaking world records for weekly and monthly sales.”

In 1982, McDonald’s Japan’s reported the highest sales of any operator in the Japanese food service industry. No account of the chain’s rapid rise would be complete without a mention of its founder, Fujita Den.

“Mr. Fujita was very energetic. In the 1980s, one or two outlets opened every week: Mr. Fujita would visit every new branch before it opened and then attend the opening ceremony to cut the ribbon. He would also visit nearby branches, thoroughly checking all aspects of the restaurant, both inside and outside, and berating the staff for the slightest discrepancy. Mr. Fujita was intimidating, but his sense for business surpassed that of any other businessperson.”

Fujita became the darling of the food service industry overnight, and wrote several books on getting rich, including Atama no warui yatsu wa son o suru (Why Dummies Lose Money), causing him to be dismissed in some quarters as money-crazed. However, Nakazono, who saw Fujita work up close, remembers things somewhat differently.

“One side of him was all about money, but I would describe Mr. Fujita as a ‘computer who recited the naniwa-bushi’,” says Nakazono, referring to ballads about obligation and compassion.

To make money you have to make people work, says Nakazono. Fujita stressed the importance of a sense of duty and compassion, as well as financial compensation. He especially showed consideration to the families of his employees.

“When Mr. Fujita was CEO, McDonalds would sometimes issue a March bonus at the time of the account settlement, in addition to the regular July and December bonuses. The March bonus was paid not only to permanent staff, but also to their wives, the rationale being that this would make the wives encourage their husbands to work hard.”

And this was not all. Fujita would have florists send flowers to employees’ wives on their birthdays.

“These weren’t ordinary bouquets, either,” explains Nakazono. “They were flowerpot arrangements that lasted for around a year. When the wife saw the flowers, she would encourage her husband to work hard. Mr. Fujita kept his employees motivated by considering their wives.” 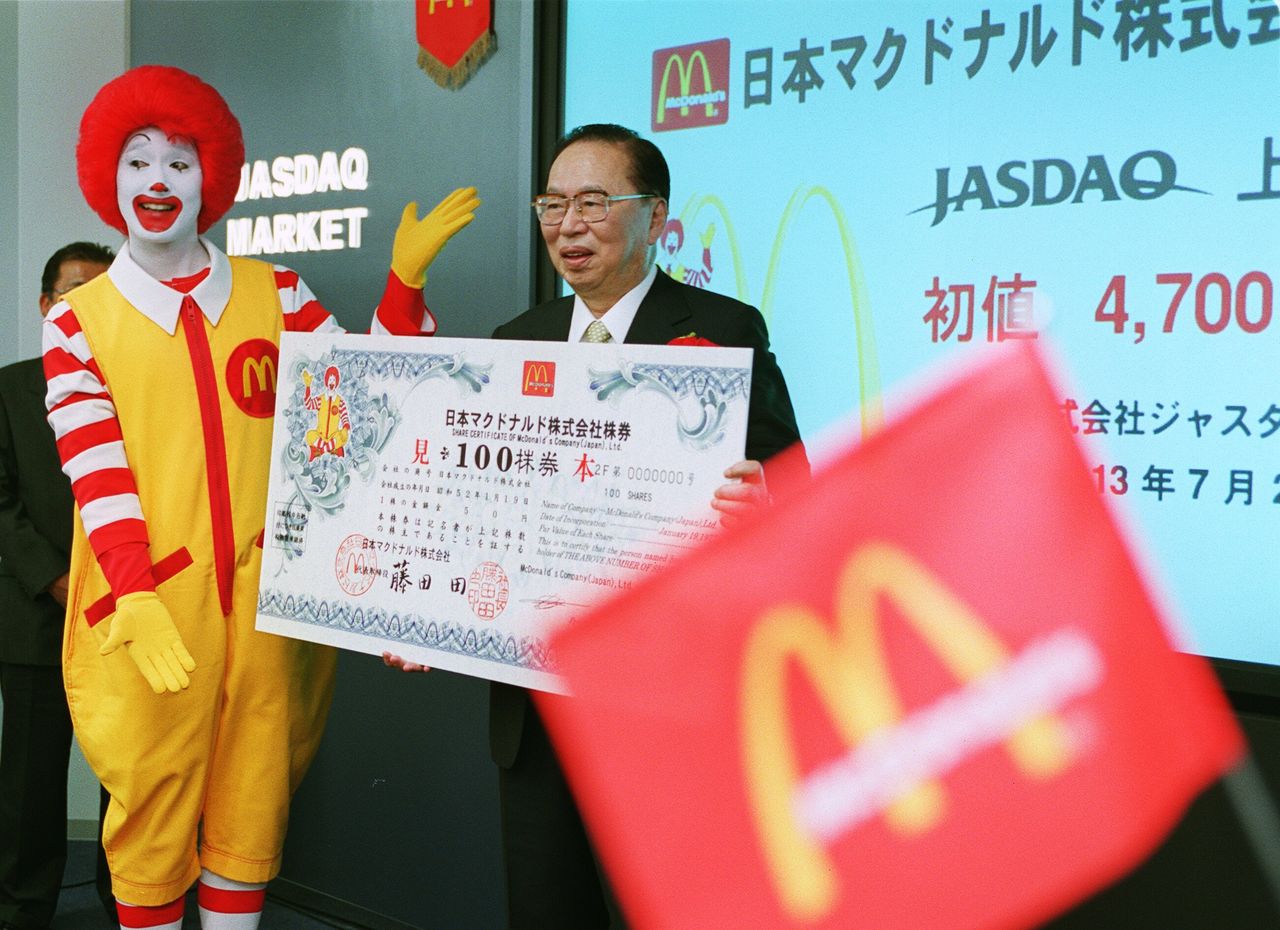 McDonald’s Japan CEO Fujita Den holds a giant stock certificate at a ceremony to mark the chain’s listing on the JASDAQ exchange on July 26, 2001, Tokyo. (© Jiji)

During his first 10 years at McDonald’s, Nakazono was posted to outlets around Japan. He was then assigned to the company’s Tokyo head office, where something happened he will never forget.

Nakazono bumped into Fujita in the toilets. Fujita looked at him and said casually, “Gene! Your daughter will be starting school soon, won’t she?”

Nakazono recalls: “Mr. Fuijta was right. My daughter was starting school the following year. I was surprised: the fact that he was able to come out with that information in a trice means he must have known the family makeup of all his employees. The incident reinforced my impression that Mr. Fujita was always concerned about his employees, and reminded me that I had to be on my A-game while working for him.”

Under the leadership of Fujita, who was extremely charismatic and had a well-honed sense for business, McDonald’s Japan grew quickly, changing Japan’s gastronomical culture. In a country where it was once said that hamburgers would never catch on, they have become a daily snack for many.

Nakazono left McDonald’s Japan in 1990. His years with the company—1973 to 1990—represent the restaurant chain’s period of fastest expansion during its 50 years in Japan. In 1977, McDonald’s Japan opened its first drive-through. In 1987, the chain’s sankyū set meals (a pun on “thank you” and sankyū or “39,” as they cost ¥390) were a hit, and the phrase became a household word. With the opening of the first McDonald’s in Yamagata in 1990, the chain covered every prefecture in Japan.

However, when Japan’s asset bubble collapsed and deflation set in, the restaurant chain’s run of success started to falter. In 2000, McDonald’s launched half-price meals on weekdays. Selling hamburgers that normally cost ¥210 for just ¥65 brought professional men in their forties, who were trying to get by on smaller allowances in a recession, back to McDonald’s. This was the beginning of the collapse of the restaurant’s prices. McDonald’s Japan was celebrated as a winner from the deflationary spiral.

The celebrations were short-lived, however.

In 2002, McDonald’s Japan pulled the plug on its half-price meals in effort to boost average customer spend, which had dropped markedly. This sparked a backlash among consumers, causing the company to post its first loss since it was founded. Fujita stepped down as CEO and assumed the position of chairman, but subsequently resigned from that position as well after the March 2003 general meeting of shareholders. He died from a heart attack on April 21, 2004.

In its 50 year history, McDonald’s Japan has endured two major crises. The first crisis, described above, lasted from the mid-1990s until 2002. The combination of rapidly aging restaurants dating from the company’s period of rapid expansion and the new hard discount approach damaged the McDonald’s brand. While in 2002, the number of McDonald’s outlets in Japan peaked at 3,891, sales of existing outlets had continued to fall for seven consecutive years.

While the company began to gradually recover, in 2010 it fell back into decline, and in 2014 experienced its greatest crisis ever. This was the expired chicken scandal. It was revealed that a Chinese trader that supplied the meat used in chicken nuggets had been altering expiry dates. A noncommittal explanation by CEO (now Chair) Sara Casanova that McDonald’s had been tricked by its suppliers came under fire, tarnishing the company’s reputation.

“I would sometimes go to McDonald’s during my occasional visits to Japan. From 2005 on, the restaurants could be summed up in a single word: ‘messy’. Trays of unfinished food were left on tables and there was rubbish under tables. It was terrible. The QSC values that Mr. Fujita had held dearly since the chain’s establishment had been damaged,” he says.

“QSC” stands for Quality, Service, and Cleanliness. Nakazono and his fellow employees had these values hammered into them by Fujita.

“In terms of cleanliness, Mr. Fujita would visit many outlets no matter how busy he was and give the inside and outside a thorough going-over. He also required restaurants to be refurbished within five years of opening. That’s how important cleanliness was to him,” says Nakazono.

After weathering two crises, however, McDonald’s Japan has managed to pull off an amazing V-shaped recovery. This was all thanks to the chain returning to its roots and re-implementing QSC. To recover lost ground, Casanova instructed employees on the importance of giving good service, and borrowed significantly to fund the refurbishment of all aging restaurants. By revamping its menu, McDonald’s was able to use the news media and social media to get the word out that the old McDonald’s was back, and successfully restored consumers’ confidence. It was in such circumstances that McDonald’s celebrated its golden anniversary. 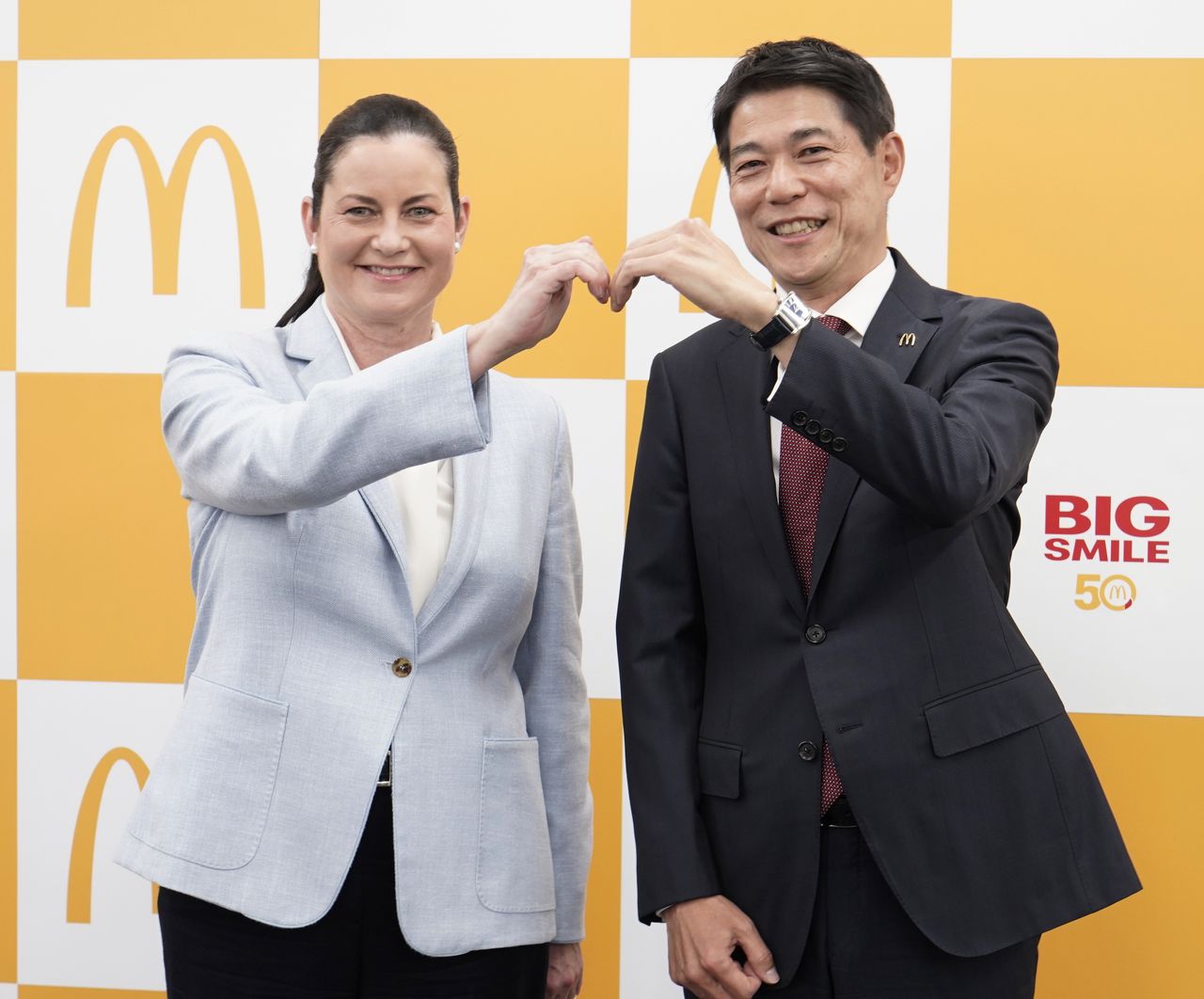 Nakazono reminisces fondly about the company at which he used to work, one that has overcome many crises and recently marked its fiftieth anniversary as the star of Japan’s food service industry.

“In business, there is this thirty-year theory that you’ve done well to last for thirty years, but McDonald’s Japan has lasted for fifty. I honestly think it’s amazing. I believe the genius and innovator who was Fujita Den, who understood the business well and advocated the principles of QSC as well as V, for Value, played a big part in company’s success,” he says.

“When I joined McDonald’s, people still associated the food service industry with sushi chefs and other skilled artisans. However, Mr. Fujita told us that in the future, the industry would all be all about money, and that people fresh out of university would be running the show. He went on to hire a huge number of recent graduates. His prescience was correct. I hope McDonald’s Japan hangs in there and reaches its hundredth anniversary. I will have a big celebration in heaven,” laughs Nakazono. 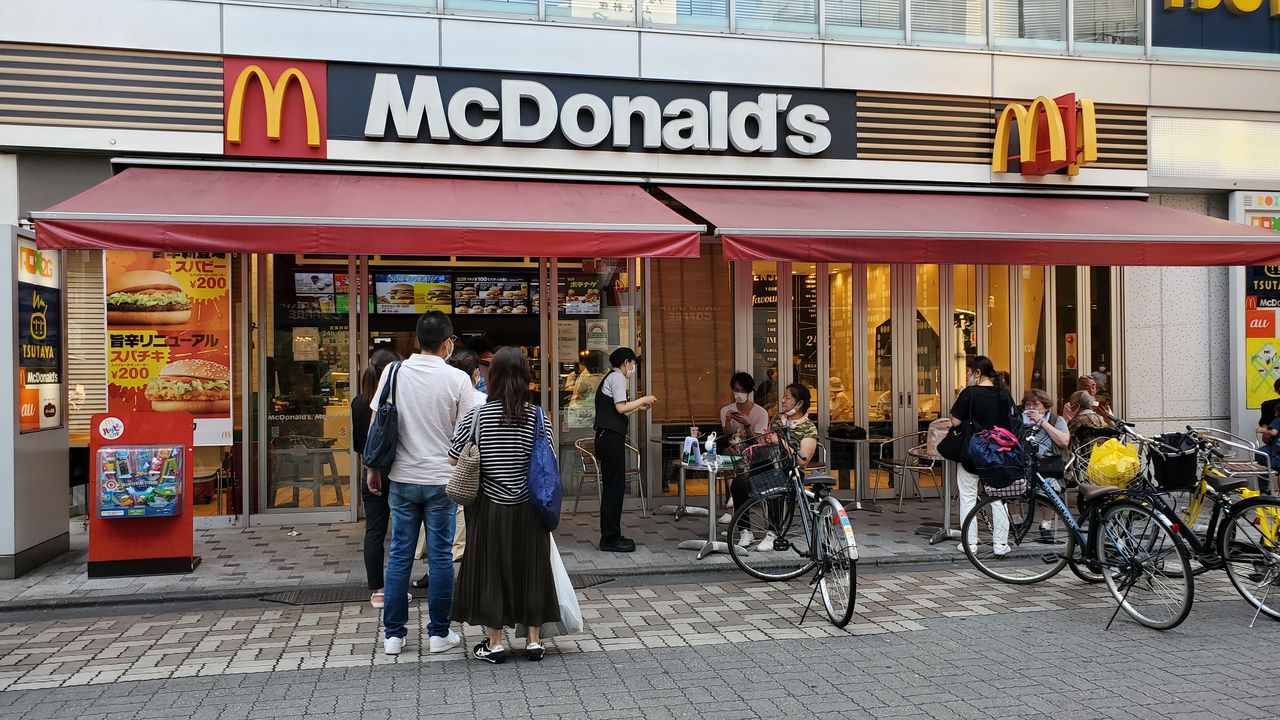 A line forms outside a Tokyo McDonalds. (Photo by the author)