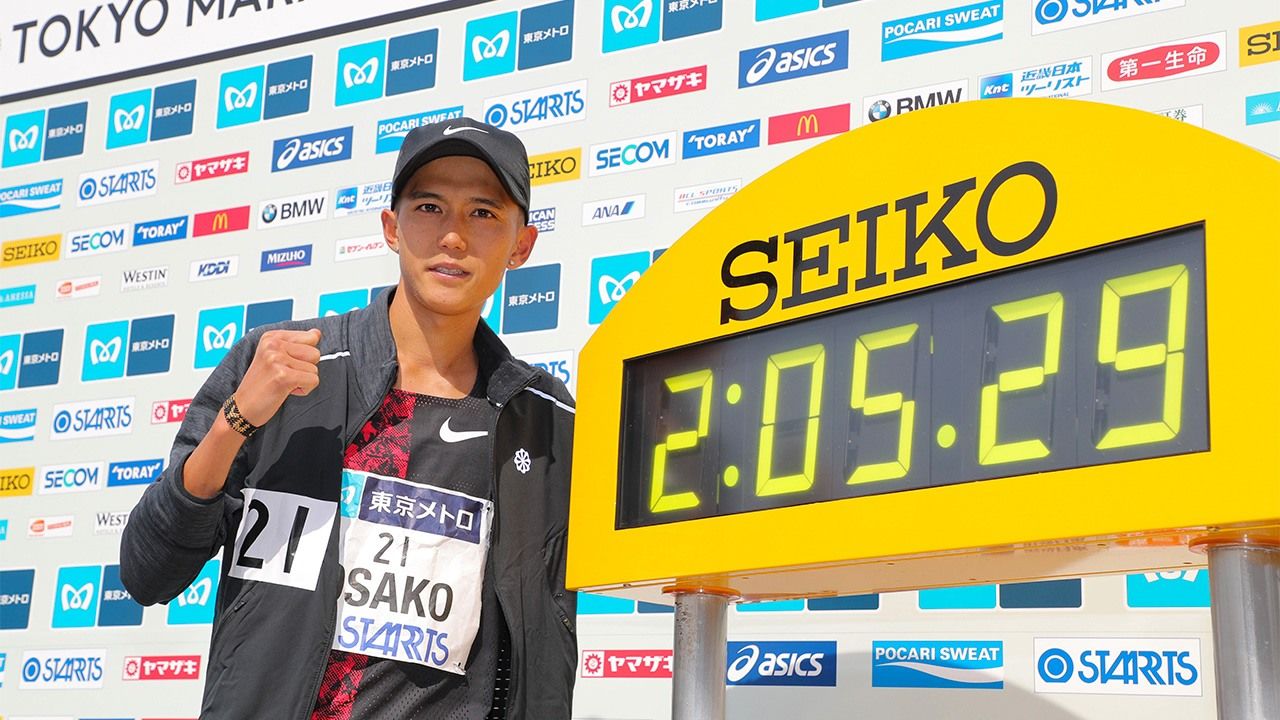 Tokyo 2020 Sports Aug 3, 2021
Long-distance runner Ōsako Suguru is considered to be Japan’s best bet for an Olympic medal in the marathon. Known for his unusual approach to training, he has announced that the hallmark event of the games, slated to get underway on August 8 in Sapporo, will be his last race.

Ever since he was a child, long-distance runner Ōsako Suguru has wanted to go faster. As a youngster coming up through the ranks, he had success in events like cross country and the 10,000 meters. Switching to marathons later in his career, he has logged some of the fastest times among runners from Japan, including twice setting the Japanese record in the event. He has announced his intention to retire after the Olympics.

Ōsako has always been particular about training. As a junior high school student he followed a regular regime and even opted to skip a family skiing trip, partly to train and partly out of fear that an accident on the slopes would hinder—or worse, end—his running ambitions.

Always looking to challenge himself, he sought out faster runners, leading him to leave his native Tokyo to attend running powerhouse Saku Chōsei High School in Nagano Prefecture, before going to Waseda University.

In his view, there are benefits to not being the best. “There’s a certain pride that comes with being the team ace,” Ōsako say. “But this also tempts runners to fall back on their reputations rather than continue pushing the limits.” He insists he has always preferred environments that challenge him to improve. “I’ll train anywhere to shave a few more seconds off my time.”

At Waseda, he competed all four years in the prestigious New Year Hakone Ekiden, a grueling, two-day relay pitting university teams in a race from Tokyo to the foothills of Mount Fuji and back again. Although Ōsako excelled in the competition, including helping Waseda win the title in his freshman year, by his own admission he disliked participating in the long-distance relay format and would have instead preferred to focus his energy on middle-distance races.

After university, like most graduates looking to continue their racing careers, Ōsako joined a corporate-sponsored running team, Nissin Foods. He would leave after little more than a year, though, crossing the Pacific to join the Nike Oregon Project, which brought together some of the top long-distance runners in the world.

Removed from the safety and security of Japan’s corporate team system, he had to think for himself. He had visited the project while in university and was impressed with the warm welcome he had received. Once part of the team, though, he came face to face with the intense competition at the international level. “I was a little naïve at first in expecting to find an environment that would merely challenge me,” Ōsako recounts. “Instead, the pressure to perform was intense. Members were expected to show results or face the prospect of having to quit the project.”

He says training alongside teammates like Galen Rupp, the US 10,000-meter record holder, gave training the emotional intensity of an actual race. “If Galen was running at 98 percent, I would have to put in close to 100 percent just to keep up,” declares Ōsako. “I would talk to other runners as well as the coaches about how I was running like crazy, which was no joke.”

Ōsako qualified for the 2016 Rio de Janeiro Olympics, competing in the 5,000 and 10,000 meters. Facing a competitive international field, he managed to best his fellow Japanese runners, but fell far short of his goal of finishing in the top eight. After the games, he switched his focus from middle-distance events to the marathon. 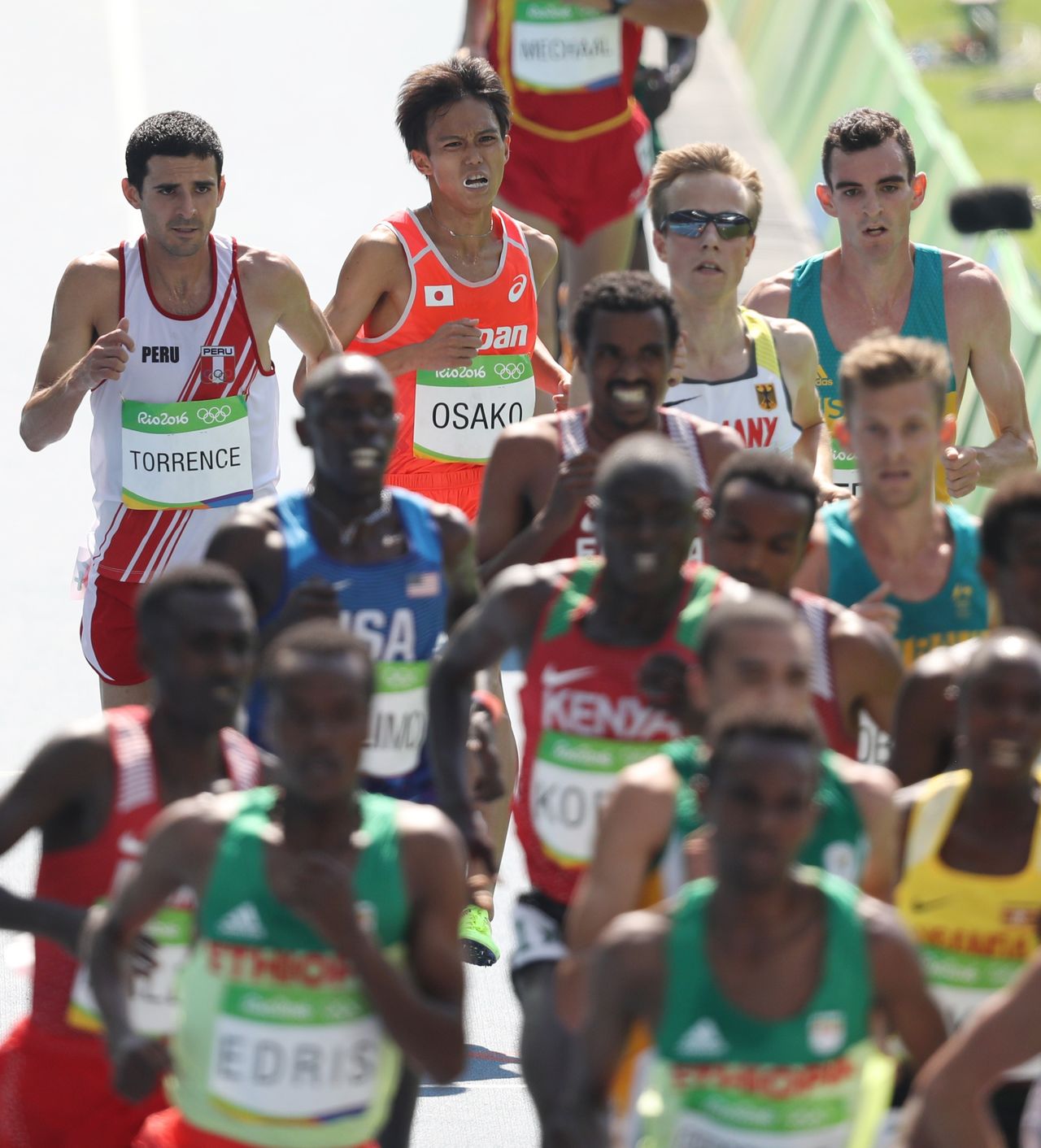 Ōsako runs at the back of the pack in a qualifying heat of the 5,000 meters on August 17, 2016, in Rio de Janeiro. Finishing sixteenth, he failed to make the finals. (© Jiji)

Ōsako quickly took to the longer event. He made his debut at the Boston Marathon in 2017, placing an impressive third. He then went on to match his performance at the Fukuoka International Marathon later that year. Building on these results, in October 2018 at the Chicago Marathon, he broke the Japanese record set barely eight months earlier by Shitara Yūta, finishing in the time of 2 hours, 5 minutes, and 50 seconds.

The Japanese sports world heralded the achievement, but Ōsako refused to get swept up in the hype, seeing his three marathon performances as nothing more than a starting point. “I’ve been fortunate, maybe too fortunate,” he said at the time. “The truth is, I still have a lot to learn.” He would soon find out how right he was.

He competed in the Tokyo Marathon in 2019, his fourth race, amid terrible conditions. The temperature in the capital was a frigid 5.7 degrees Celsius and a chilling rain was falling. Ōsako plodded along through the relentless drizzle, wet, cold, and miserable. Unable to find his stride, he retired near the 29-kilometer mark. The disappointment was palpable.

Then in September that year, he ran in the Marathon Grand Championship. Held in Tokyo, the event determined two of Japan’s three Olympic marathon berths. All eyes were on the national record holder, but after a close-fought race, Ōsako crossed the finish line in third place, five seconds behind the leader.

Despite failing to stamp his ticket to the Tokyo games, Ōsako remained upbeat about his performance. “I got beat,” he candidly admitted. “But I also learned a thing or two from the two guys ahead of me. Sometimes you have to lose to improve.”

As the Japanese record holder, Ōsako was assured the final spot for Tokyo, that is unless someone came along and beat his time. Opting not to play the waiting game, he entered the 2020 Tokyo Marathon and succeeded in knocking 21 seconds off the national record, sealing his place on the Olympic team. 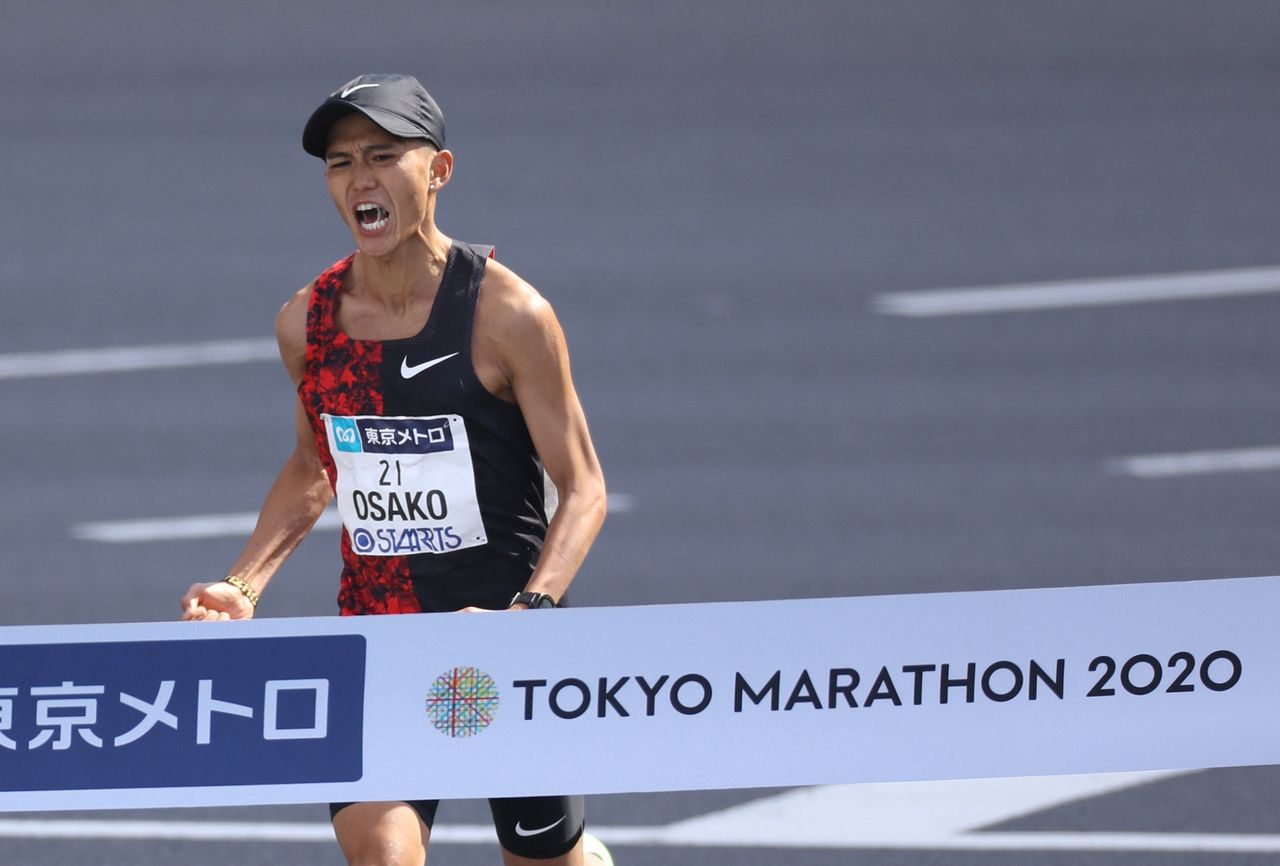 Ōsako celebrates as he crosses the finish line of the Tokyo Marathon on March 1, 2020. His fourth-place finish was the best of any Japanese runner. (© Jiji)

Reflecting on his performance in the MGC and Tokyo Marathon, he says the events reinforced for him the importance of running his own race. “If the pace is a little too fast, then I need to let off the gas some and settle back into a comfortable rhythm,” commented Ōsako. “That’s how I was able to set the Japanese record.”

Like other athletes, Ōsako has struggled to remain motivated for the Olympics as the pandemic wreaked havoc on society. He says that early on he received offers to participate in charity races and virtual events, but that none resonated with him. As cities around the world went into lockdown and Japan declared its own state of emergency, he spent several months pondering his next step and eventually decided to focus his energy on bringing up new, promising Japanese runners.

In July 2020, he launched Sugar Elite, a project that aims to raise the competitiveness of Japanese runners on the world stage. Targeting mainly university athletes, the program gathers top prospects for a series of training camps.

The idea for Sugar Elite, however, predates the pandemic. After finishing the Chicago Marathon in 2018, Ōsako hinted at the idea when he admitted that he had only so many races in him and wanted to be involved in bringing up the superstars of tomorrow. “It’s not realistic to expect runners from my generation to catch up with the top countries in the sport,” he commented. “But we can close the gap by passing on our experience to the next generation. We just need the right environment in which do it.” 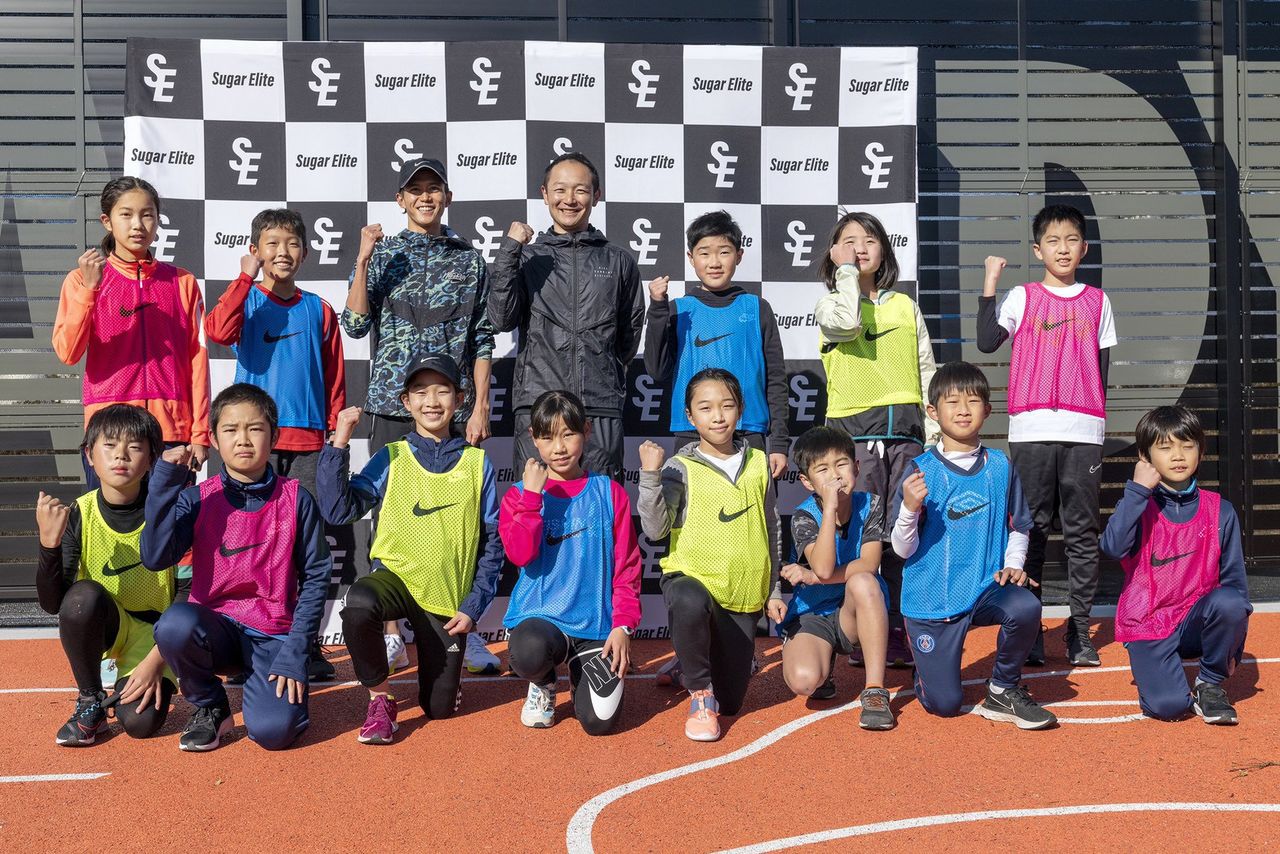 Ōsako poses with elementary students participating in a track and field workshop in Tokyo in December 2020. (© Sugar Elite/Jiji)

Amid the pandemic and subsequent postponement of the Olympics, Ōsako has increasingly poured energy into the project, holding running clinics and other events during the brief breaks in his schedule. Watching him realize his vision for himself after retirement is impressive, although Ōsako admits he has a lot of work ahead of him. “I’m known among track and field fans, but I’m not even in the same league as the top baseball and soccer stars. To do what I want to do, I need to boost my name recognition, which means getting results.”

Ōsako in January of this year travelled to Kenya to train ahead of the Olympics. There he followed a straightforward regime to focus his mind on the race ahead of him. “I’m in a good place,” he said while in Africa. “I’m not going through any ups and downs, but just feeling both excited and relaxed about what’s ahead. I’m focused purely on training.”

At the end of March, though, the Kenyan government ordered a country-wide lockdown to combat a rise in coronavirus cases, forcing Ōsako to cut his training camp short by four months. Flying to the United States, he eventually changed his game plan and switched to high-altitude training in the mountains of Flagstaff, Arizona.

With regard to his medal chances in Tokyo, Ōsako offers up a surprisingly candid response, stating that “the top contenders have times in the two-hour, one-minute and two-minute range. Frankly, that’s beyond my reach. I’m aiming instead to stay close by the leading pack and slip past people as they fall off the pace. If I’m able to run the race I want, then I might have a shot at medaling.”

August 8 will be Ōsako’s last race, and fans will be watching to see how he fares against the world’s top marathoners. However, it will also mark the beginning of a new stage in his life as a runner. He has already committed to participating in events for elementary students and other young athletes. No matter his performance in Sapporo, he intends to work to ensure that the next generation of Japanese runners have a better shot at winning gold.

(Originally published in Japanese. Banner photo: Ōsako poses next to a clock displaying his new Japanese record in the marathon on March 1, 2020. © Jiji.)