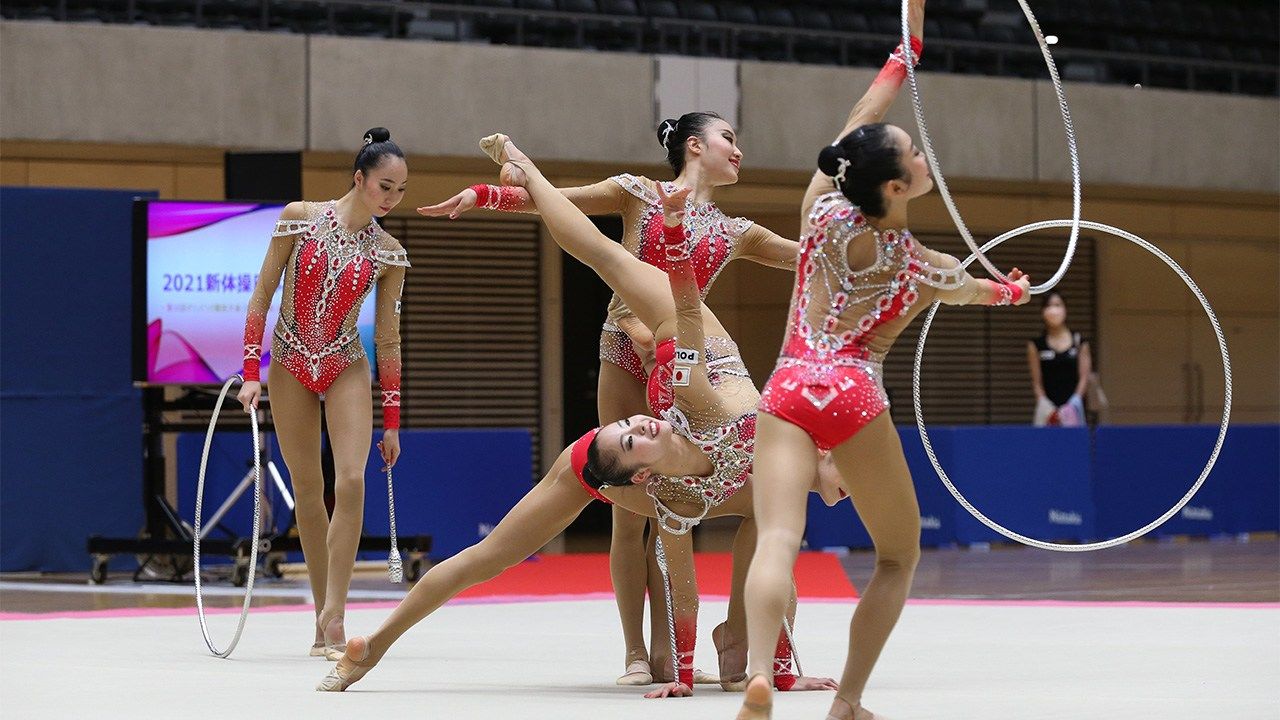 Rhythmic Gymnastics: Fairy Japan Ready Once More to Compete at the Top

Tokyo 2020 Sports Aug 6, 2021
Japan’s rhythmic gymnastics team, nicknamed Fairy Japan, is a gold contender at the Tokyo Olympics. Taking silver at the 2019 world championships demonstrated that the team was a world-class powerhouse, but that came after years of struggle. The team’s slump was broken by Yamasaki Hiroko, a leading gymnast in the 1980s, who helped the team build this new strength over 17 years.

Ripe Time for a Medal

Fairy Japan is ready to go for itsultimate victory at Tokyo 2020, and Yamasaki Hiroko, head of rhythmic gymnastics team enhancement for the Japan Gymnastics Association, is ready for years of hard work to pay off.

The team finished third in the overall group competition at the 2017 world championships, earning Japan’s first medal in 42 years, then went on to win silver at the 2019 championship, with the nation’s first ever gold in the group five balls event, and a silver in the three hoops and two pairs of clubs event.

Now, Fairy Japan is one of the world’s top-ranked rhythmic gymnastics teams, but it took 17 years of rebuilding and reform after its botched Olympic bid in 2004 to get there. Yamasaki has stood at the center of those efforts since taking charge of the Japan Gymnastics Association enhancement division in 2004, during a low period for Japan’s team.

Individual rhythmic gymnastics was first adopted at the 1984 Los Angeles games, and group competition arrived at the 1996 games in Atlanta. Japan performed well at the 2000 Sydney games, finishing fifth in the group competition. Most of the team members were from the club at Tokyo Women’s College of Physical Education, and their daily group practices prepared them to perform in harmony and earn higher marks. Soon after, though, Japan’s rhythmic gymnastics efforts hit a turning point. The team was unable to earn a spot at the 2004 Athens Olympics, due in part to a 2001 change in the rules.

The new rule stated that when one of the five gymnasts made a mistake in any certain move, the points would drop to zero immediately, instead of being deducted from the team total. A team could no longer afford any mistakes when attempting a difficult technique.

In Japan, individual gymnasts were no longer able to keep up with the demands of this new rule. Gymnast training was the responsibility of individual clubs at universities and companies, with no national system for team training like that found in Russia. The development environment and funding were simply inferior to those of the strongest overseas competitors, and Japan was unable to offer a training system that could match the increased level of difficulty.

That was the situation when Yamasaki was chosen to step up to take charge of building a stronger national team. Yamasaki was herself a star on the national team in the early 1980s. after retiring from competition she worked as a sportswriter, while helping the Japan Gymnastics Association to strengthen the team.

She says she was hesitant when she was asked to take the post because she was unsure why she chosen, as she had not made her name in any leadership roles. Nevertheless, she took up the role, saying “If there is something I can do to help revitalize this sport that I have devoted my life to, I will.” 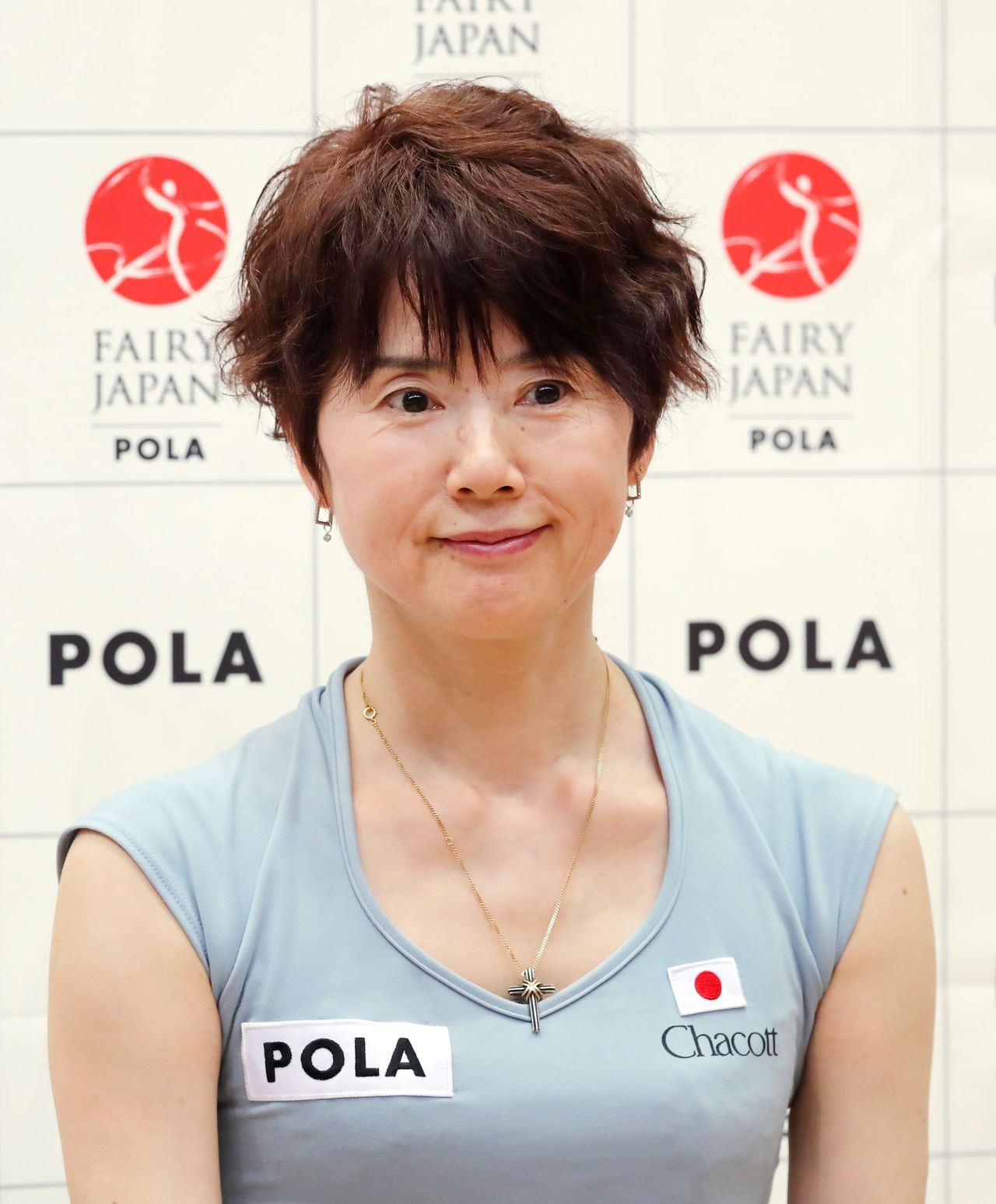 Competing as a Group

The first thing Yamasaki did was investigate what Japan must do to keep from falling further behind on the world stage. Her conclusion was that gymnast development would no longer be an individual club responsibility, but that the national association would get involved. She also felt they should focus on strengthening team performance, rather than on individual athletes.

“Looking at past tournaments, the results clearly showed that individuals struggle to medal,” she says. “Setting aside the Athens Olympics issue, though, our group had done well, placing fourth at the 1999 Osaka World Championships, and fifth at Sydney in 2000. We had a chance at a medal in the group competition.”

In individual events, the competition comes down to a direct battle of skill. In addition, the difference between Japanese gymnasts and their European rivals in arm and leg proportions, and in the resulting gracefulness, had a clear impact on scoring.

With these ideas for reform in place, she then adjusted the selection process for the national team. Rather than looking for gymnasts already excelling at competitions, she looked toward younger athletes in their mid-teens who exhibited outstanding flexibility and physical characteristics. This helped find athletes with potential for skill development, and with the physical proportions to level the playing field with overseas athletes. The next step was to take the time to develop those younger players.

Of course, by intentionally overlooking currently competitive gymnasts, the new plan came under fire. “People would ask ‘why isn’t that gymnast on the team’ and so on,“ Yamasaki says. Even with the criticism, she refused to compromise her plan to start winning medals. The team knew it had to stay on that course, even if it meant ignoring current strengths, and trained hard.

Yamasaki also changed the training program. Auditions for national gymnasts took place at the end of 2005. Selected gymnasts from all over the country then transferred to a special high school in Chiba Prefecture to live, study, and practice together every day. Gymnasts trained for seven hours a day, so this schooling became something more like an extended training camp.

As a result, the team was able to earn a spot at the 2008 Beijing Olympics, but only came in tenth. They were still unable to medal. 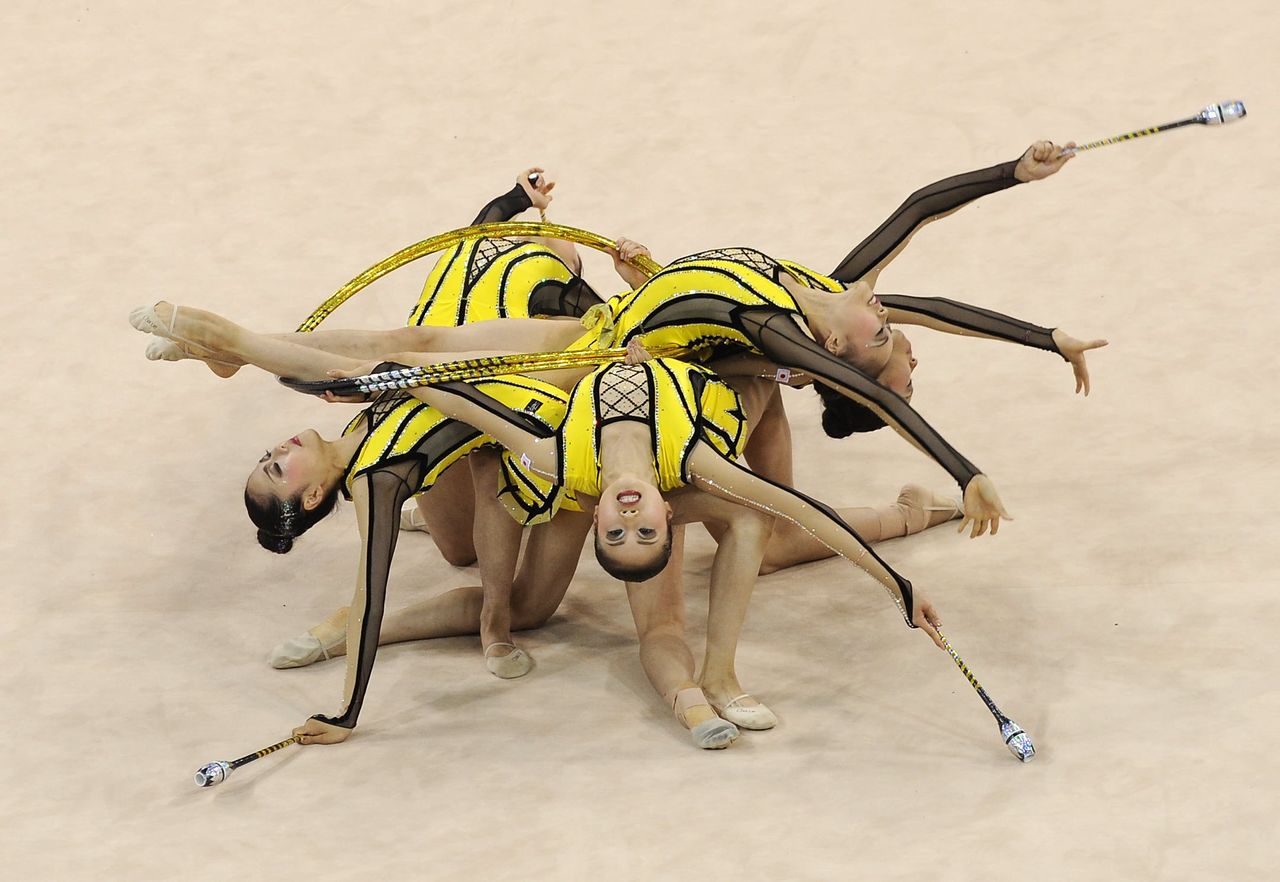 Japan performs in the hoops and clubs event during the group qualifying round for the Beijing Olympics. They missed out on advancing to the top eight after placing tenth, on August 22, 2008. (© Jiji)

Breaking With Tradition to Recruit a Russian Coach

Yamasaki’s next move was to recruit Inna Bystrova, from gymnastics powerhouse Russia, to coach. She also established a training base in Saint Petersburg, Russia, for extended training on-site.

Many of Japan’s Olympic sports groups are run by amateurs, and the field overall remains relatively tight-knit. It has become accepted wisdom that successful Japanese athletes should go on to coach the next national team, which leaves little room for innovation.

Yamasaki’s experience as a sportswriter exposed her to a wider world, broadening her perspective and allowing her to initiate these enormous changes. From an outside perspective, it may seem obvious that recruiting a leader from an already strong country is a good way to improve, but in a field so fixated on the status quo, the move was like setting off a bomb.

The team got financial backing from sponsors to send gymnasts to Saint Petersburg. In addition to the strict training regimen, they also experienced the city’s art and culture in experiences that would go on to feed their creative expression. The results soon started to show.

At the London Olympics in 2012, they finished in seventh place, despite losing a key member to injury just before the games. At the Rio de Janeiro Olympics in 2016, with their sights set on a medal, they placed a solid fifth in the qualifying round. However, a fatal mistake in the ribbon event during the finals cost them a lot of points, and they ended up placing eighth.

“The error was unfortunate, but the gymnasts didn’t give up and did their best,” Yamasaki says. She immediately looked to the future, telling her team: “We couldn’t reach the podium this time, but it’s now in sight. The real competition is still ahead.”

Her words have proven to be prophetic as the team has mounted the winners’ podium increasingly often since the 2017 World Championships, where their bronze seemed to be the signpost for growing success.

One reason for the sudden leap in results is an increased focus on mental toughness. The advance in skills was evident from the group’s fifth place showing at the Rio qualifier. However, the team failed to bring those skills to bear in the finals, and Yamasaki feels that was down to the pressure overwhelming them. So, she hired a mental coach. The gymnasts now practice mental training exercises and encourage each other even when they make mistakes in training. The results of this new training showed with their bronze at the world championships.

In 2018, another change in the rules put a bit more wind in Japan’s sails. In rhythmic gymnastics, final tallies are based on two scores: the D score, which rates technical difficulty, and the E score, which rates successful execution. The latest change eliminated the upper limit for D scores. In other words, the score structure now favors teams that adopt and can execute more difficult techniques. 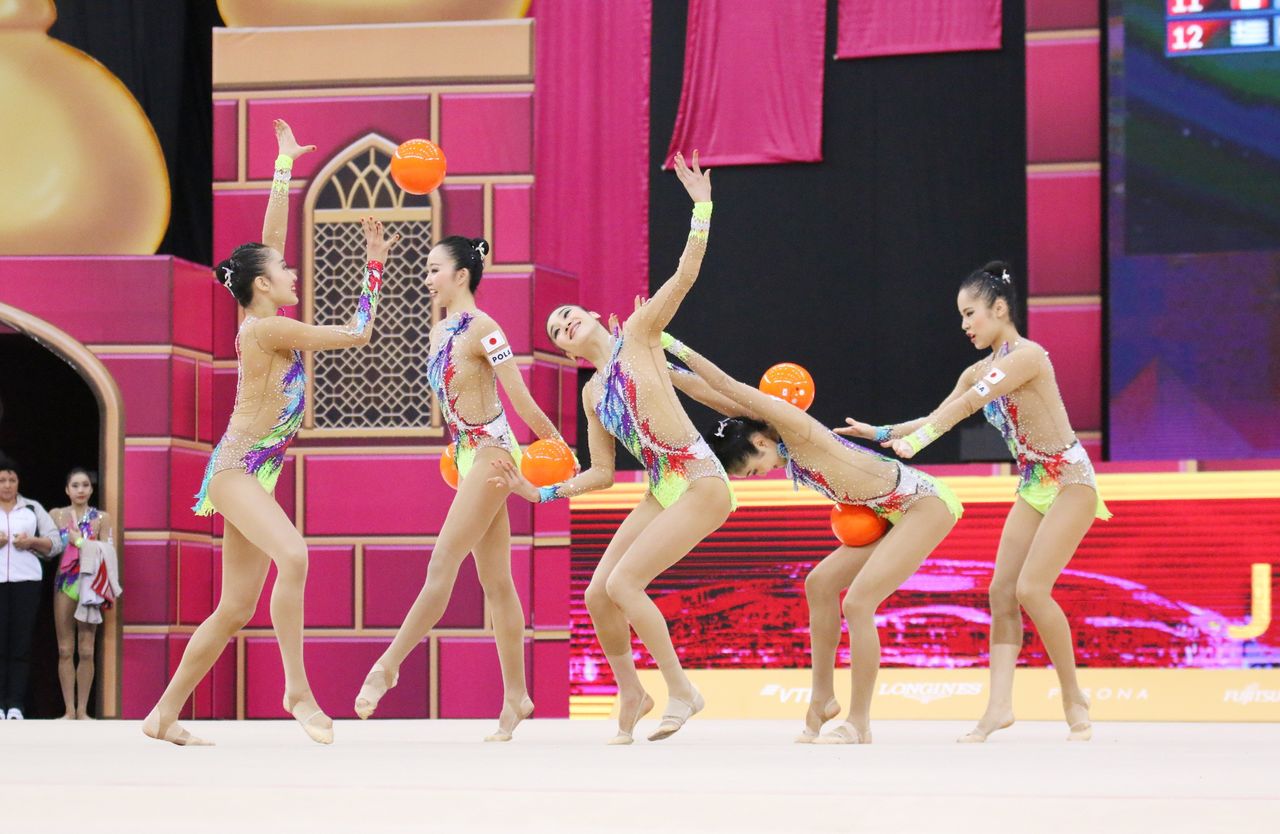 Japan’s five balls performance, which helped earn the team a silver at the world championships. Taken on September 21, 2019, in Baku, Azerbaijan. (© Jiji)

Since Japan had been building advanced technical skills by keeping the same athletes together through extended periods of practice, this rule change was decidedly in their favor. Their silver at the 2019 world championships was a visible result of the years of reform that Yamasaki instituted.

Yamasaki’s biggest target, an Olympic medal, will be decided by the qualifying round on August 7, and the finals on August 8—the last day of the Tokyo Olympics.

Fairy Japan’s greatest rival is the Russian team, who have won gold five times in a row, but the Japanese women will also be facing other nations with strong competition records, like Belarus, with three past medals, or Bulgaria and Italy, with two each. The competition will be tight.

Yamasaki is well aware of the battle ahead. “With every country striving for gold, any competitor could lose in the semifinals. That’s true for us, as well.”

The time has come to put her 17 years of reforms to the final test. Every move in the Fairies’ graceful performance will be an expression of the same passion that has driven Yamasaki’s uncompromising vision.

(Originally published in Japanese. Banner photo: The athletes of Fairy Japan perform with hoops in the rhythmic gymnastics trials for the Tokyo Olympics held on June 19–20, 2021. © Japan Gymnastics Association.)