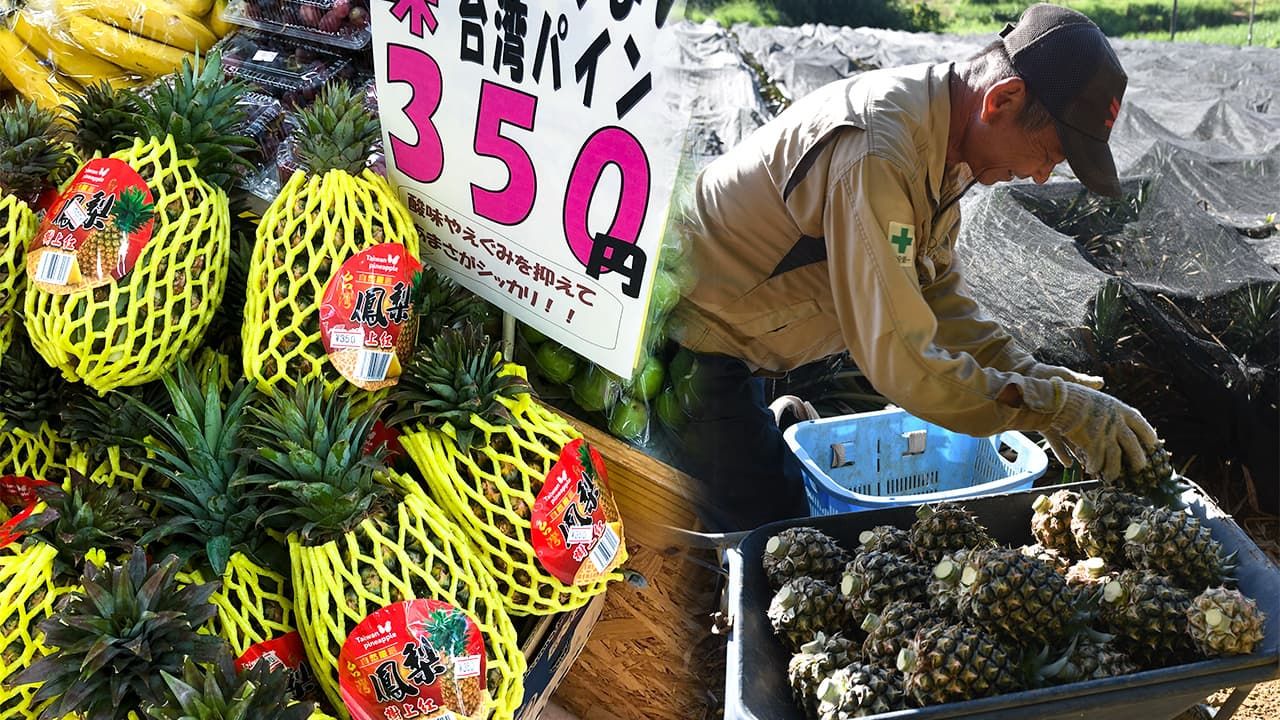 Society Food and Drink Sep 30, 2021
Japan earlier this year countered China’s surprise decision to ban imports of Taiwanese pineapples by boosting shipments of the fruit from the island in a bid to aid growers there. The show of support has dismayed pineapple farmers in Okinawa Prefecture, whose crops compete with Taiwanese brands in the domestic market. The situation shines a light on the shared history of pineapple farming in Taiwan and Okinawa and raises the question of the consumer appeal of Okinawan varieties amid increased competition.

Okinawa is known for a wide array of exotic fruits, most notably pineapples. Farmers in the prefecture have been cultivating the tropical plant for the better part of a century, and from nearly the beginning the industry has been closely linked with nearby Taiwan. At different times, Okinawa has welcomed waves of Taiwanese growers, laborers, and entrepreneurs, whose input has helped make the fruit an agricultural mainstay for the prefecture. Today, though, burgeoning imports of Taiwanese pineapples and pandemic-related economic pressure on local farmers are causing many in the industry to consider a new way forward for home-grown Okinawan brands.

The sweet, unmistakable smell of pineapple permeates the late-May air around Azuma Kinzō’s fields on the island of Ishigaki. Located in the Takeda district in the foothills of Mount Omoto, the farm produces standard varieties of pineapples like the Hawaiian Smooth Cayenne as well as a recently developed type dubbed the “peach pineapple” for its distinctly peachy fragrance.

Azuma is preparing to harvest his crop, mostly the Smooth Cayenne variety, planted on one hectare of land. The summer picking season, which gets into full swing in June and July, is a hectic time for the area’s growers. “The pineapples ripen all at once,” Azuma explains. “You have to pick like mad just to keep up.”

Walking along each row of plants, Azuma carefully lifts the shroud of black netting that shades the bushes from the unrelenting sun, harvesting fruit as he goes. The pineapples he places in the plastic basket on his back are mostly green, with just slight reddish coloring at the base. Wielding a hatchetlike tool called a nata, he deftly peels one of the fruits to reveal the perfectly ripe flesh, juicy and golden. 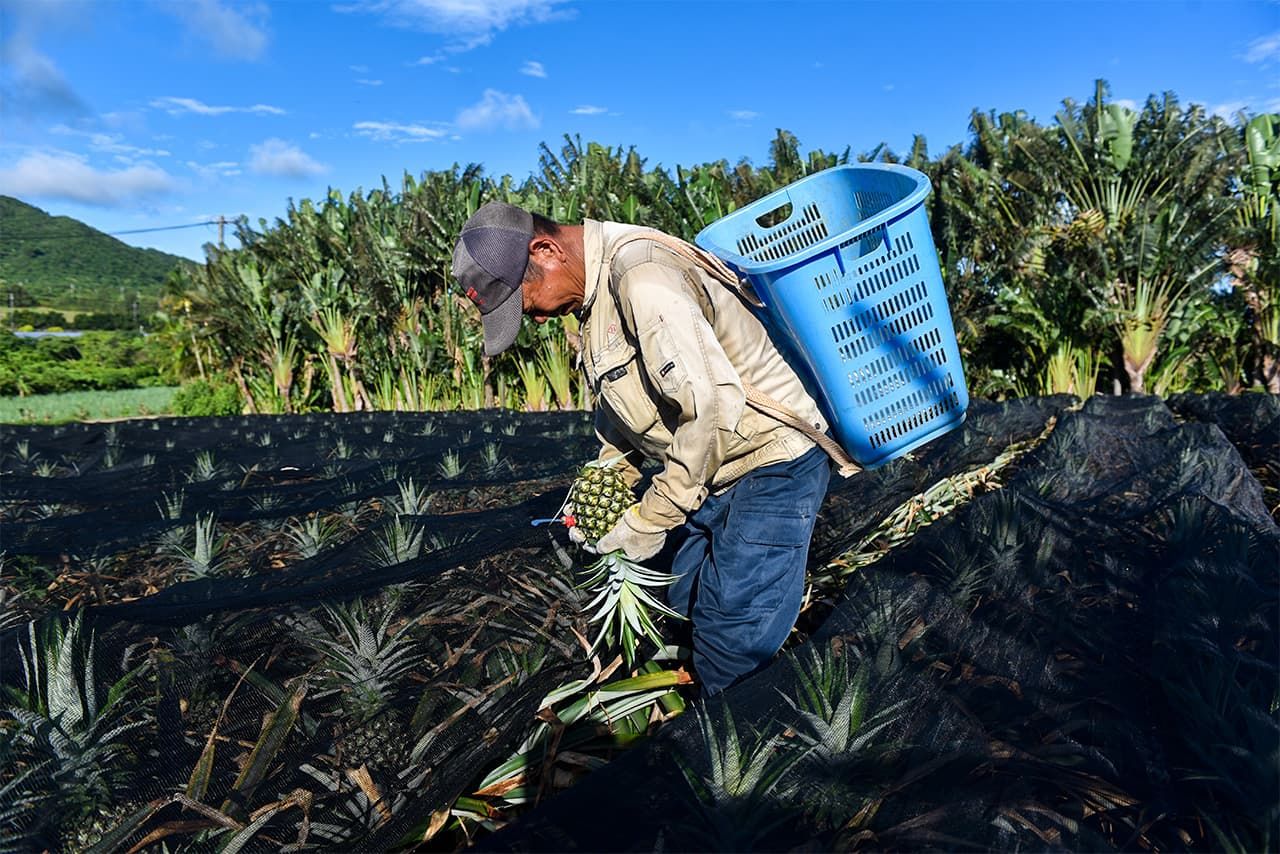 Pineapple farmer Azuma Kinzō harvests fruit from his fields in May 2021. (© Matsuda Yoshitaka)

Azuma offers me a slice, which I gladly accept, the juice running down my arm as I hastily pop the morsel into my mouth. Ishigaki pineapples are known for their balance of sweetness and tanginess. This year’s crop is especially good, the fine weather the island enjoyed during the growing season having imbued the pineapple with an extra sugary succulence.

Azuma peddles his pineapples at Yuratiku, a market run by the local branch of the Japan Agricultural Cooperative group, and at stalls along the prefectural highway. However, he says sales have dropped during the pandemic as the normally steady flow of tourists to the island came to a near halt, forcing him to shift to alternate vending routes. As people stay at home more, he has seen an uptick in domestic orders. One of his biggest sellers is a box of six medium-sized pineapples, which he offers at ¥4,800 and will send anywhere in Japan, shipping included. He packs the parcels himself, carefully wrapping the freshly picked pineapples in newspaper and placing them upside down in the box, a trick that ensures that sugars concentrated at the base redistribute evenly throughout the fruit.

Industrial pineapple farming in Okinawa got its start on Ishigaki. Two of the most influential figures early on were Lin Fa and Liao Jianfu, transplants who brought with them a wealth of knowledge and experience from Taiwan, where the business was already well established.

Lin, a native of Taichung, helped run the company that established the first pineapple cannery on Ishigaki in 1938, while Liao, who came from what today is the township of Beidou, was instrumental in reviving cultivation on the island in the postwar years. According to Liao’s son, Shimada Nagamasa, his father provided pineapple seedlings to the wave of farmers who relocated to Ishigaki from Miyako and the main island of Okinawa, as well as supporting the agricultural efforts of hundreds of Taiwanese immigrants. 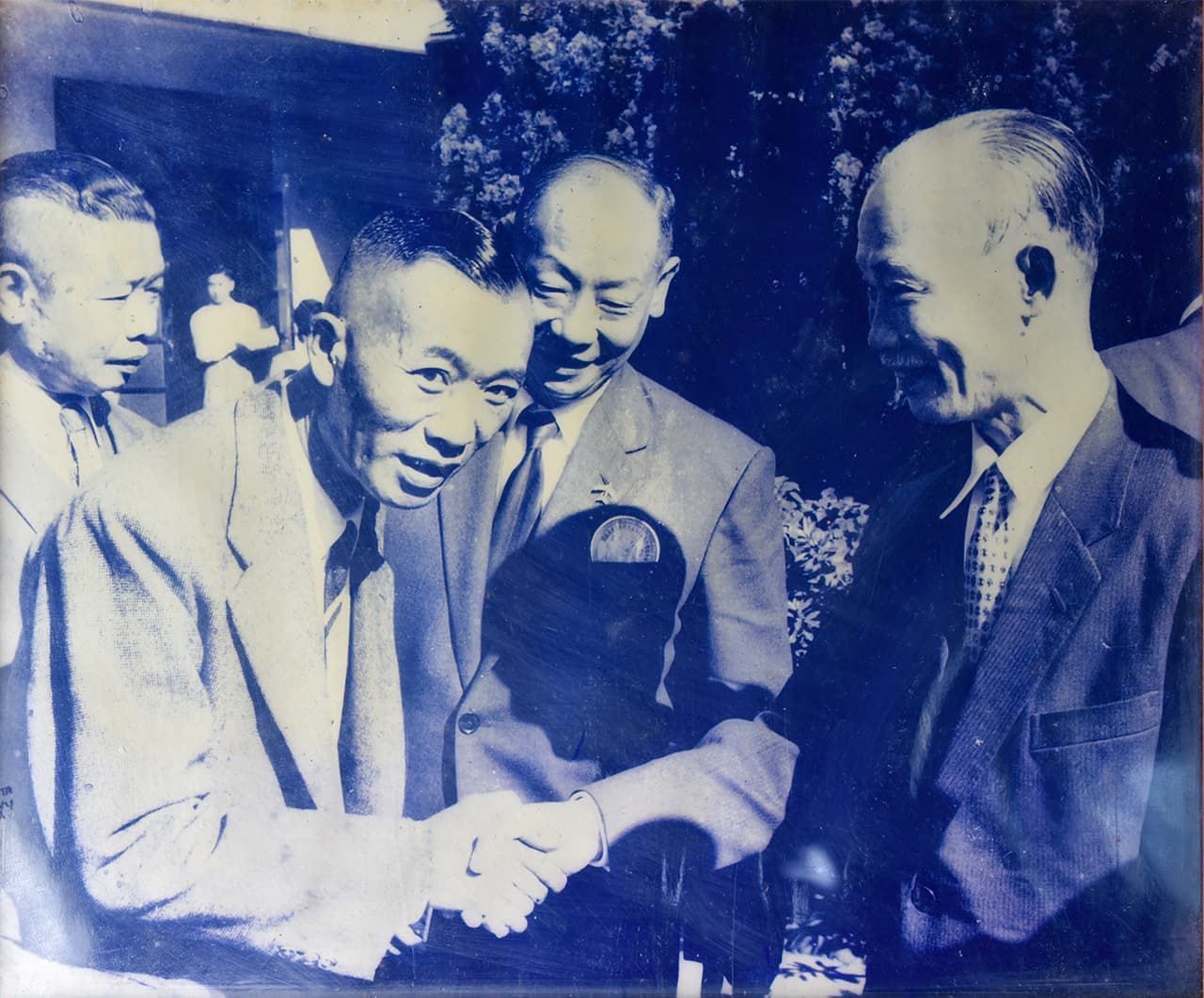 Azuma’s parents were among the tide of newcomers to Ishigaki. His father came to the island from Taiwan around 1960 and established the farm that Azuma now runs with the help of his wife, a Taipei native, and a few part-time workers.

Taiwan also played a role as pineapple production took root in other parts of Okinawa. In 1952, the horticulturalist and businessman Tamai Kamejirō succeeded in establishing a viable plantation in the village of Haneji, which is now part of the city of Nago. Tamai, a graduate of the Okinawa Prefectural Agricultural and Forestry High School, spent the early part of his career at a Japanese sugar refining firm overseeing sugarcane plantations in Taiwan’s Hualien County. After leaving the company, he switched his focus to cassava cultivation and processing. 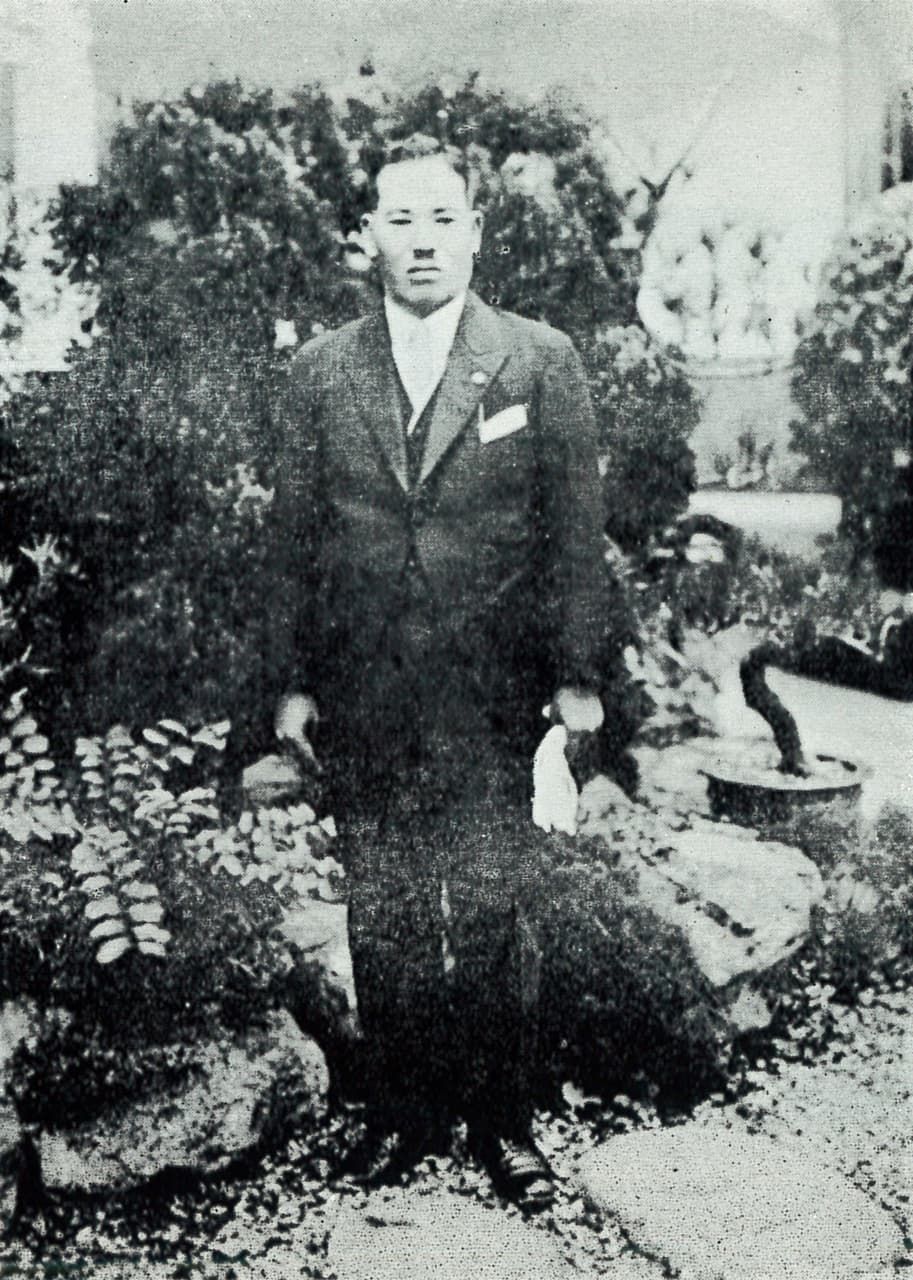 After the war, he returned to Okinawa, and with the help of a cousin, a former emigrant to Hawaii, he put what he had learned in Taiwan to work growing pineapples. Today, the town of Higashi in the north of the main island is famed for the fruit, as is centrally located Nago, which is home to sprawling fields and even a pineapple-themed amusement park.

Okinawa’s pineapple industry, brought to a standstill by the Pacific conflict, flourished in the postwar years. As they had decades earlier, migrant workers from Taiwan played a central role, providing experience and much-needed labor. During the long US occupation of Okinawa, which ended in 1972, thousands of Taiwanese made the trip across the water to work in fields and factories during the busy summer picking season. The Yaeyama Islands in the southwest of Okinawa Prefecture saw an influx of some 2,000 workers during the period. Canneries particularly benefited from Taiwanese knowhow to ramp up output, with the tinned fruit coming to form the backbone of the industry.

The pineapple business flourished in Taiwan as well, where many producers took a negative view of the migrant laborers, who they saw as aiding their main rival in the vital Japanese mainland market. Tensions grew, and in 1967 an influential Taiwanese canning industry group even attempted to block the dispatch of workers. Conversely, in Okinawa, the influx of highly skilled labor from Taiwan was largely well received and even fostered local acceptance of the prefecture’s already sizeable Taiwanese community.

Production in Okinawa peaked in 1969 before steadily declining over the subsequent decades as the availability of inexpensive canned pineapple imports grew. The industry evolved as it contracted, with the bulk of prefectural output becoming fresh rather than canned pineapple.

Since the start of the pandemic, though, growers have increasingly become concerned as the downturn in tourism robbed them of an important customer base. In 2020, the number of visitors to Okinawa fell to less than 2.6 million people, a 72% decrease compared to the previous year. Amid the sudden drop in tourists, farmers and distributors have scrambled to find buyers for their pineapples. For instance, Michi no Eki Kyoda, a roadside station in Nago that offers local produce, launched a crowdfunding campaign in August 2020 in an attempt to keep some 4 tons of fruit from going to waste.

The situation was exacerbated unexpectedly by a rise in tension between China and Taiwan. Earlier this year, the Chinese government, in a thinly veiled political move, announced that it was banning imports of pineapples from Taiwan. In a show of solidarity, Japan snapped up a portion of the surplus fruit, bringing in nearly 7,000 tons from January to April, more than five times the amount imported over the same period the previous year. The pace has not abated, and since March, when the Chinese ban went into effect, Okinawan producers have increasingly felt the pinch of the goodwill gesture.

Okinawa pineapples make up only a fraction of Japan’s overall market for the fruit. In 2018, the prefecture produced 4,780 tons, compared to 158,000 tons imported from Taiwan and other countries. The full effect of the influx of Taiwanese pineapples on Okinawan growers remains to be seen, but many farmers in the prefecture have launched online campaigns or started seeking out alternate avenues to connect to customers in a bid to protect their bottom lines. 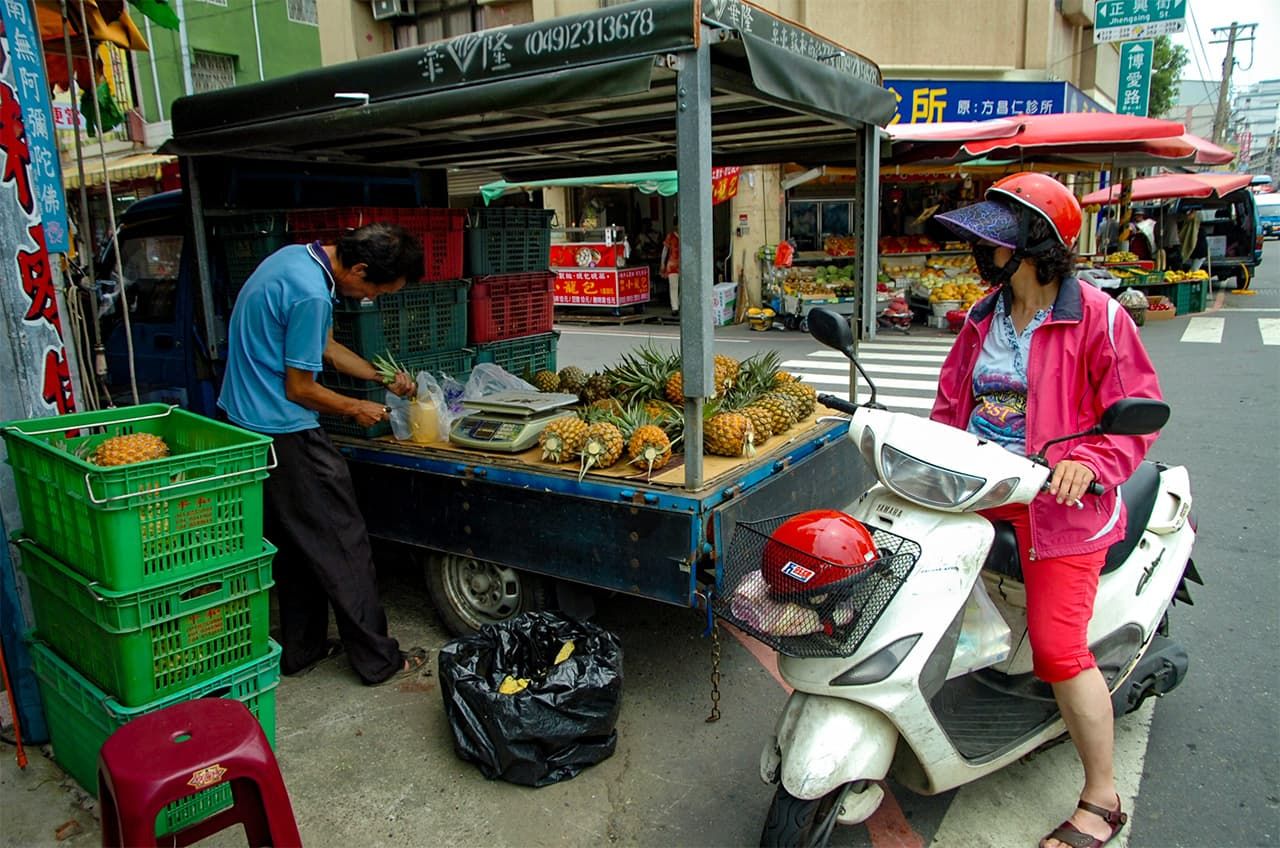 The are some in Okinawa who see the situation as a wakeup call. Looking over a pineapple display at an Ishigaki supermarket, Ōtaki Shiryū, a Taiwanese-born fruit seller in his sixties, says that with fewer tourists to sell to, local growers have been forced to compete more in the domestic market. “It’s shaping up to be a head-to-head battle.”

Farmers in Okinawa have used the high quality and freshness of their pineapples to carve out a corner of the market, offering varieties that are sweet and with little tartness. However, Shimamoto Tetsuo, a veteran grower who cultivates pineapples and mangoes on a little over one hectare of land, had his assuredness shaken during a recent taste test. “I was certain that the Taiwanese imports couldn’t hold a candle to what I grow,” he exclaims, “but one bite changed my mind.” He says the fruit was just as sweet as locally grown varieties, and there was hardly any sourness, a sign that it had been picked at peak ripeness. Shimamoto sells most of his output directly to customers, but says he will have his work cut out for him if shipments of high quality Taiwanese pineapples keep up. In his view, Okinawan farmers will need to develop new and sweeter varieties if they hope to remain competitive.

The anxiety shared by many in Okinawa over the pandemic and increased competition from abroad is understandable. The fortunes of the Okinawan pineapple industry have long gone hand-in-hand with Taiwan, which has been both a savior and a rival. The most recent development in this long relationship is both a challenge an opportunity for local growers and others in the industry to reshape their business model going forward.