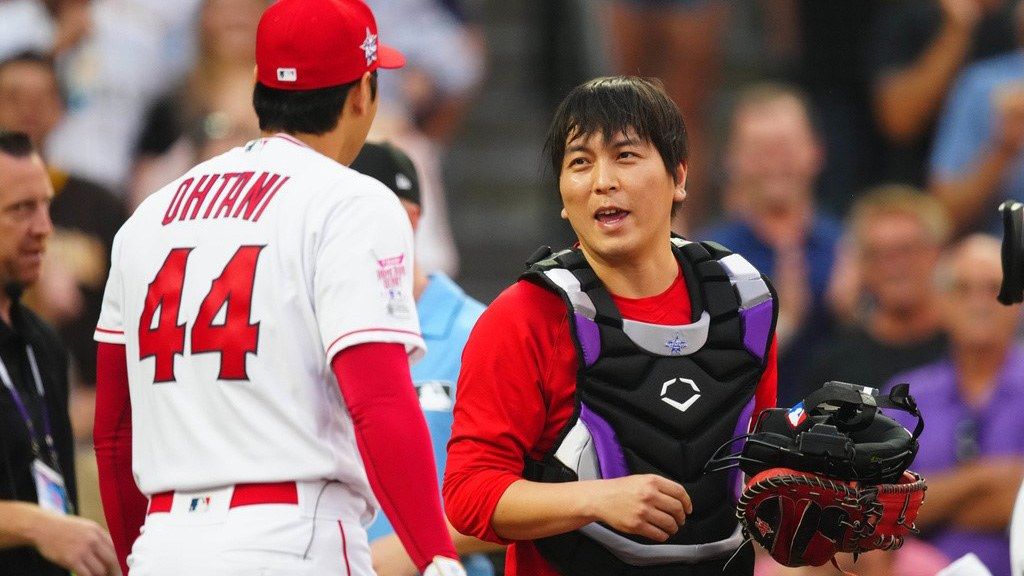 Sports Work Oct 11, 2021
Now in his fourth season with the Los Angeles Angels of Major League Baseball, Ohtani Shōhei has come back from major elbow surgery and is finally proving his abilities as a two-way player. Ohtani’s interpreter Mizuhara Ippei has been a core member of the pitcher’s support team from the start, serving in roles far beyond just his linguistic duties.

Being a two-way player is more than a one-man effort. In the shadows of the rise of Los Angeles Angels star Ohtani Shōhei stands his interpreter, Mizuhara Ippei.

Throughout the vicissitudes of Ohtani’s Major League Baseball career so far, Mizuhara has been close by, taking a low-profile support role as the pitcher quests to rewrite the record books. However, he was thrust reluctantly into the spotlight at this year’s MLB All-Star Game when Ohtani, the first Japanese player to appear in the Home Run Derby, tapped Mizuhara as his catcher. The Angels posted a picture of Mizuhara, who has no experience playing organized baseball, squatting behind home plate on their official Instagram account, much to the delight of fans who were intrigued by Ohtani’s choice.

Ohtani was quoted as saying that after working together for five years at the Hokkaidō Nippon-Ham Fighters, his former Nippon Professional Baseball team, he has great faith in Mizuhara, and feels encouraged having him as his interpreter.

Mizuhara came to the United States in February 2018 together with Ohtani to help him prepare to play in the major leagues. Since then, he has become something of an unsung hero, supporting Ohtani in a wide range of areas. Along with interpreting for Ohtani when he talks with the US media, Mizuhara helps the young star see eye-to-eye with his manager and coaches, serves as a training partner to check pitching and batting​ footage, and lends a hand with various aspects of his training routine.

Mizuhara struggles to describe his relationship with Ohtani. “My first priority is to help create an environment where he can concentrate on baseball,” he declares. This includes facilitating communication in the baseball setting as well helping provide a relaxed atmosphere during down time. This often means joining Ohtani in long sessions of playing video games. The pair are also frequently seen together at a Japanese-style barbecue restaurant in the Anaheim suburbs. During the 2018 All-Stars break they visited Universal Studios together to let off steam. “We’re kind of like friends,” suggests Mizuhara, “but more like partners.” 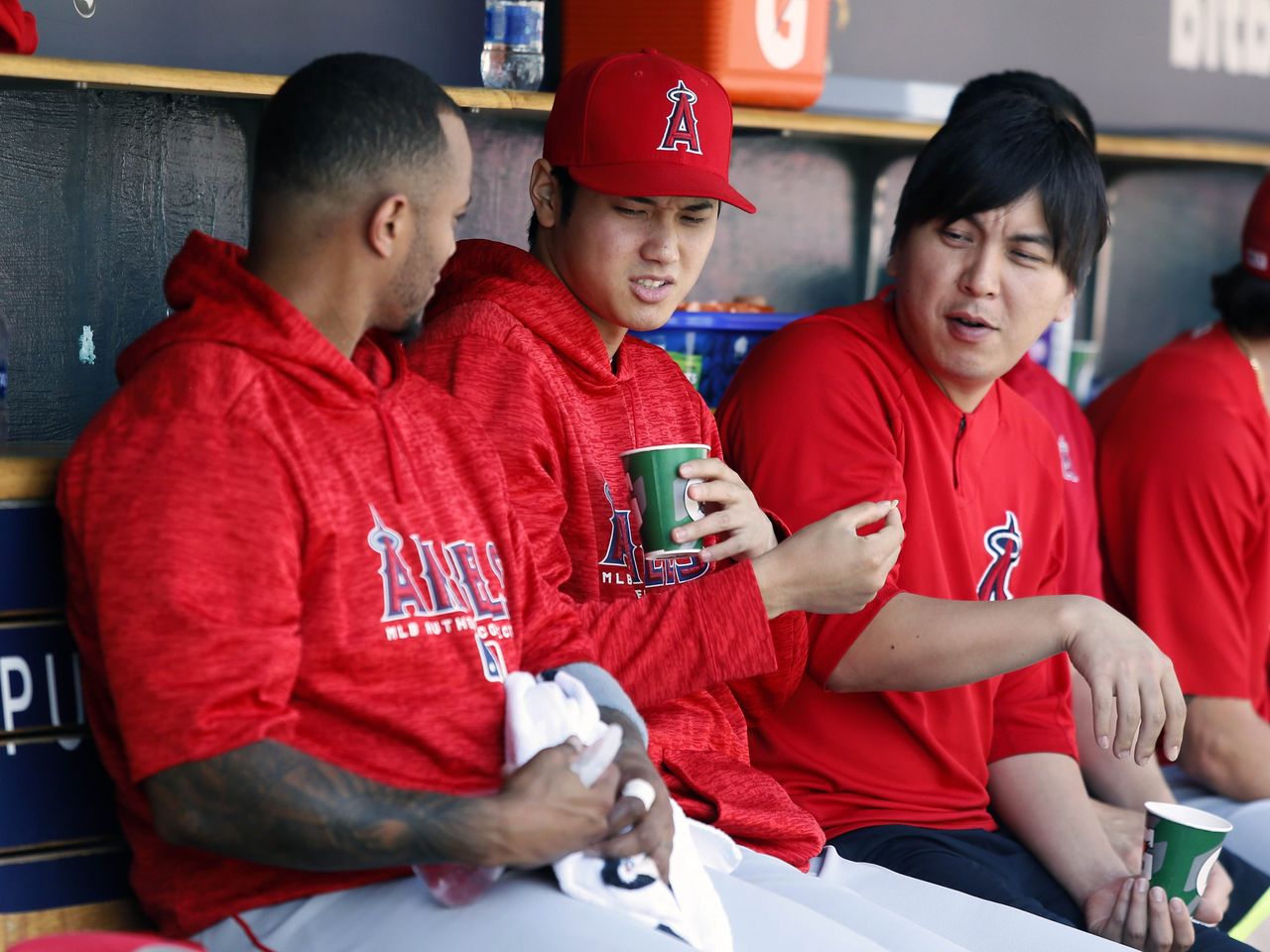 Mizuhara provides linguistic support on the bench during a game at Comerica Park in Detroit on May 31, 2018. He has a designated seat next to Ohtani in the dugout, and the two are rarely apart while at the ball park. (© AFP/Jiji)

A Part of the Team

Mizuhara’s previous job was as interpreter for the Hokkaidō Nippon-Ham Fighters. It was there that he met Ohtani, who joined the team as a rookie in 2013. Mizuhara is originally from Tomakomai in Hokkaidō, but attended high school and university in Los Angeles, owing to his father’s work. In 2010, he interpreted for pitcher Okajima Hideki during his stint with the Boston Red Sox. His work with the Angels is his second appointment in the major leagues.

With Ohtani making headlines as the first two-way player since Babe Ruth a century earlier, interest in the ever-present Mizuhara has naturally soared. He has become a well-liked fixture of the team, even making appearances on the Angels’ Instagram account.

However, his serious nature makes him an easy target for friendly pranks. When Ohtani won the 2018 Rookie of the Year award, he grabbed Mizuhara’s arm and lifted it up to strike a pose. Mizuhara was mortified by the gesture, saying that Ohtani made it seem like they had won the honor together. “I was so embarrassed,” he admitted with a laugh. “Ohtani probably did it just to get a reaction.”

The jesting did not stop there. Mizuhara later showed up at the award ceremony held at the team’s home ground, Angel Stadium, wearing a T-shirt emblazoned with the pitcher’s portrait. The following day, he confessed that team members had put him up to it, chucking that “they’re having a good giggle at making me wear that weird shirt yesterday. It made me look like a clown, but that’s not really me.”

Ohtani’s foray as a two-way player has gone smoothly this season, but COVID-19 threw his routine into disarray last year when the California state government issued a stay at home order, limiting when and where he could train. Mizuhara recounts that he spent most of his time at home, but would meet up with Ohtani to cycle around the stadium for aerobic exercise. “I couldn’t keep up,” he declares. “He pedals too fast.”

During the pandemic, the pair also played catch in the stadium parking lot. Mizuhara says that despite the circumstances, these interactions helped both player and interpreter remain relaxed during a tense period. Mizuhara married in 2018, but he sheepishly confesses that he still spends more time with Ohtani than with his family. 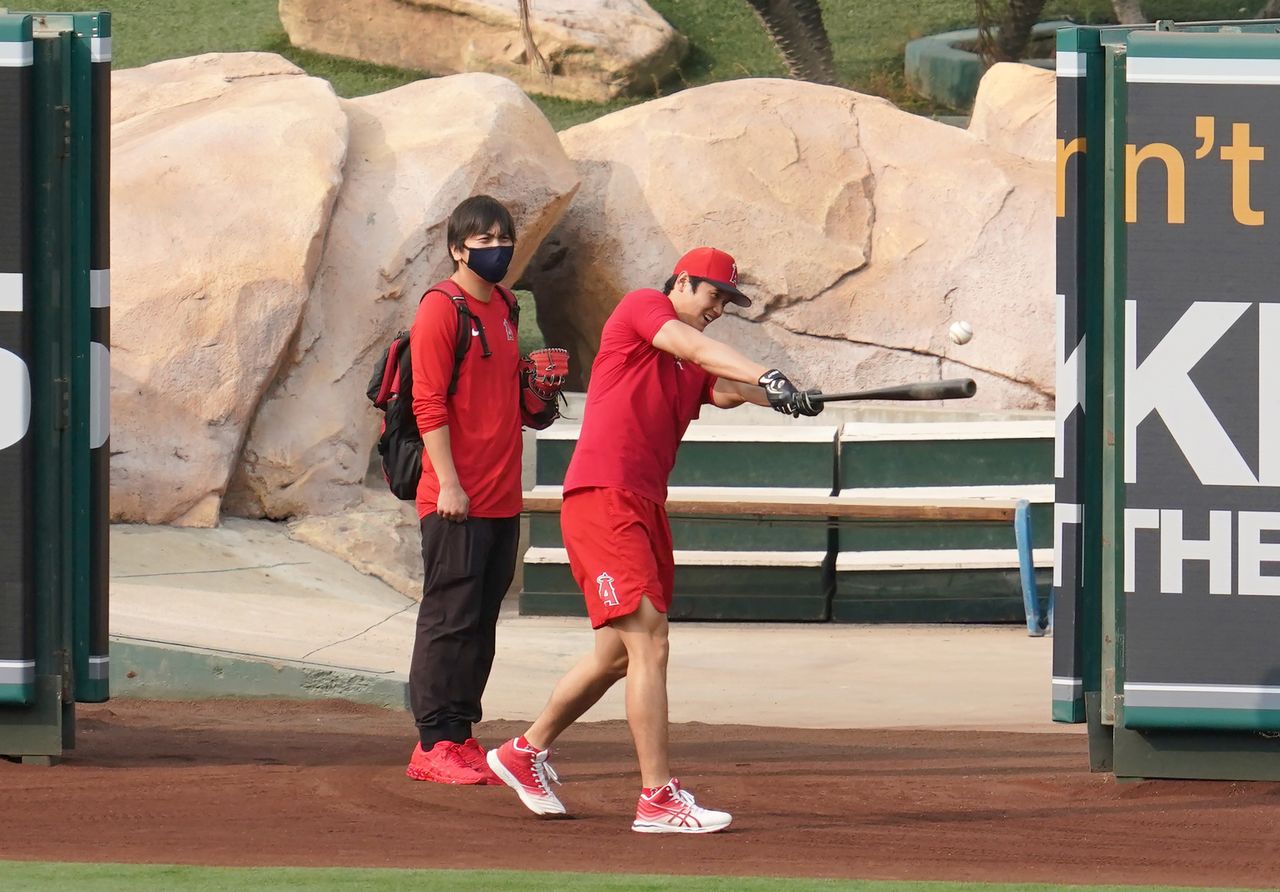 Mizuhara stands ready to assist Ohtani as he trains at Angel Stadium in September 2020. (© AFP/Jiji.)

One of Ohtani’s outstanding qualities is his ability to remain positive no matter what life pitches at him, chalking it up to experience. Mizuhara explains that “it’s not that he’s over-confident, but I never hear him complain.” As his closest confidant, Mizuhara shares in Ohtani’s trials, but he says Ohtani’s positivity picks him up.

During Ohtani’s first year in the MLB, he was diagnosed with an ulnar collateral ligament injury in the elbow of his pitching arm. After other attempts to treat the condition failed, in September 2018 he was urged to undergo Tommy John surgery to repair the ligament, a major procedure that would keep him out of action for an extended period. Having worked alongside Ohtani and seen his determination first-hand, Mizuhara took the news personally. However, Ohtani, unphased, went on to smack four hits and two home runs in the very next game.

Mizuhara says that Ohtani heard about the surgery in a phone call with then-General Manager Billy Eppler. “Naturally, he took it hard at first. He’d just recovered his batting form while undergoing rehab on his elbow, so it was quite a blow.” However, he explains that Ohtani quickly accepted the decision. “He brushed aside any feelings of disappointment and continued to give it his all at the plate. His reaction really impressed me and made me realize that I shouldn’t stay upset.”

Ohtani underwent Tommy John surgery at the end of the 2018 season. He also had surgery on his left knee in 2019. “My main hope was that he would be in better condition after the procedures,” confides Mizuhara. Answering these expectations, Ohtani has steadily recovered and eventually returned to the field as a full-fledged two-way player, giving some of his best performance of his career.

Mizuhara’s role as interpreter has earned him the praise of Angels’ manager Joe Maddon. This season, Maddon focused on closely communicating with Ohtani. Lauding Mizuhara, he said that “Ippei plays a crucial role. He manages to convey every nuance, so I know how Shōhei is feeling about things.”

A large part of what enables Mizuhara to effectively do his job is the trust he has forged with Ohtani. The pair are on the same wavelength, but Mizuhara remains humble about his role, once saying, “I’m not sure that I’m supporting Ohtani. I honestly don’t think it would matter who was doing my job.”

He unassumingly performs his duties and avoids highlighting the trust in their relationship. When fielding questions from the media, he sometimes inadvertently leaves out part of Ohtani’s response, slip ups that the pitcher laughs off. Retaining such an amicable atmosphere is only possible when two people completely trust one another.