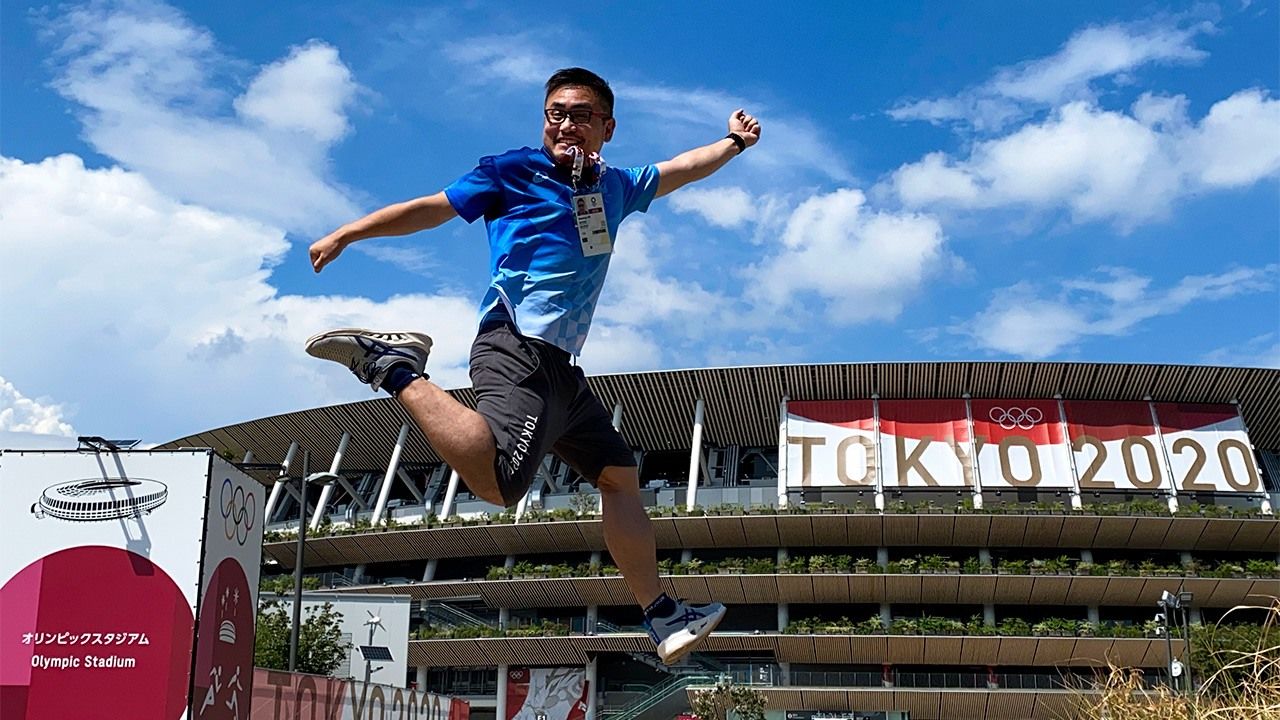 A Taiwan Volunteer’s Rewards from the Tokyo Olympics

Tokyo 2020 Sports Nov 10, 2021
The Tokyo Olympics came to an end after 17 successful days of competition, despite the ongoing COVID-19 pandemic. Behind this success was the hard work of over 100,000 volunteers who supported the event. Yao Hsuan-Hung from Taiwan joined the voluntary team and gained invaluable memories of his experiences in Tokyo.

It was the day when I set out for the first time in my volunteer uniform. The Olympics hadn’t started. TV, magazines, and other media were reporting public opposition to the Olympics, and the air was full of the smell of boycott and resistance. I got on the train with anxiety, catching the eyes of many passengers. Some of them appeared disgusted, but surprisingly there were also what seemed to be envious glances.

While worrying about what to do in case I ran into anti-Olympians, the train slowly entered the next station. I turned my head, noticing several people wearing the same volunteer uniforms boarding the train. We nodded to each other naturally. At that moment I finally felt I could relax.

The year-long delay to the 2020 Tokyo Olympic Games were not only a challenge for the organizers and athletes but also a burden on the volunteers. Undoubtedly, the epidemic and the rising voices against hosting the Olympics poured cold water on the fervor in our hearts.

But once I finally took that first step, my excitement and passion returned in a flash.

As we approached the games, various changes like minimizing the number of participants from different countries and forbidding spectators at most venues caused frequent adjustments to my volunteer program, and I was even concerned about whether it would be cancelled. However, I was fortunate to be able to participate in various eye-opening tasks. 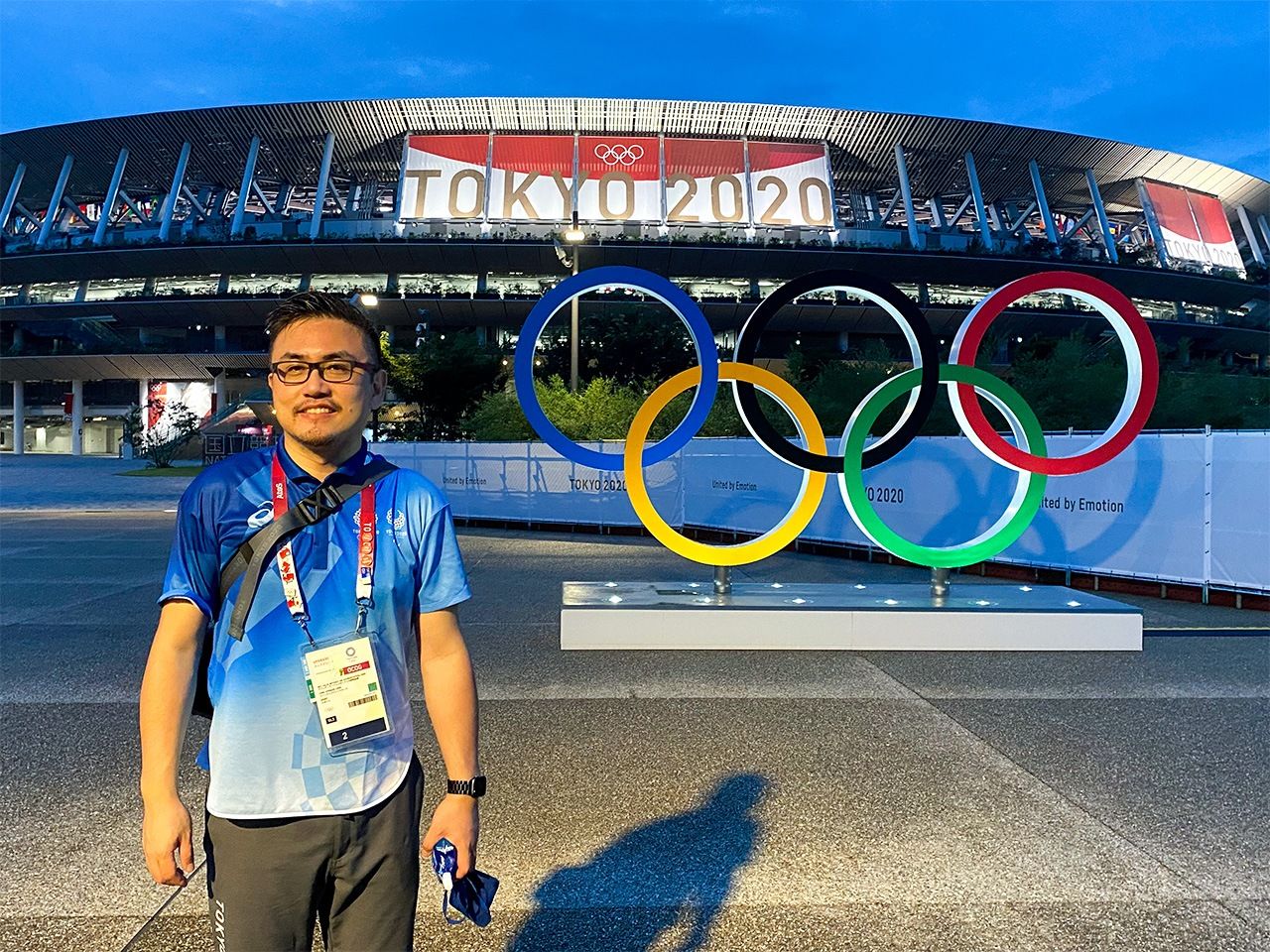 The author at the National Stadium.

Having lived in Japan for years and caring deeply about the country, I decided to volunteer for the Olympics. I didn’t apply the job through any special means; I just registered through the official Tokyo 2020 website after checking the information.

My first task as a volunteer was to play the role of an athlete in the opening ceremony rehearsal, a session that let me cycle through the entire ceremony while roleplaying different sport players. Sometimes I even got to be a flag bearer, waving a country’s flag as we entered the stadium—something I found to be both a great honor and very enjoyable! Although I wouldn’t be able to enter the stadium for the actual ceremony, I felt like I already had experienced something close to the real thing.

Miracles are always unexpected, though. On July 23, the day of the opening ceremony, I was called up to be the flag bearer for the Myanmar team and carried their flag into the arena. Although I couldn’t enter the arena together with the team’s athletes, who opted not to take part, being on the stage where people from all over the world were standing on was exciting enough! I grew teary-eyed as I entered the stadium. This is a story I can tell proudly for the rest of my life. 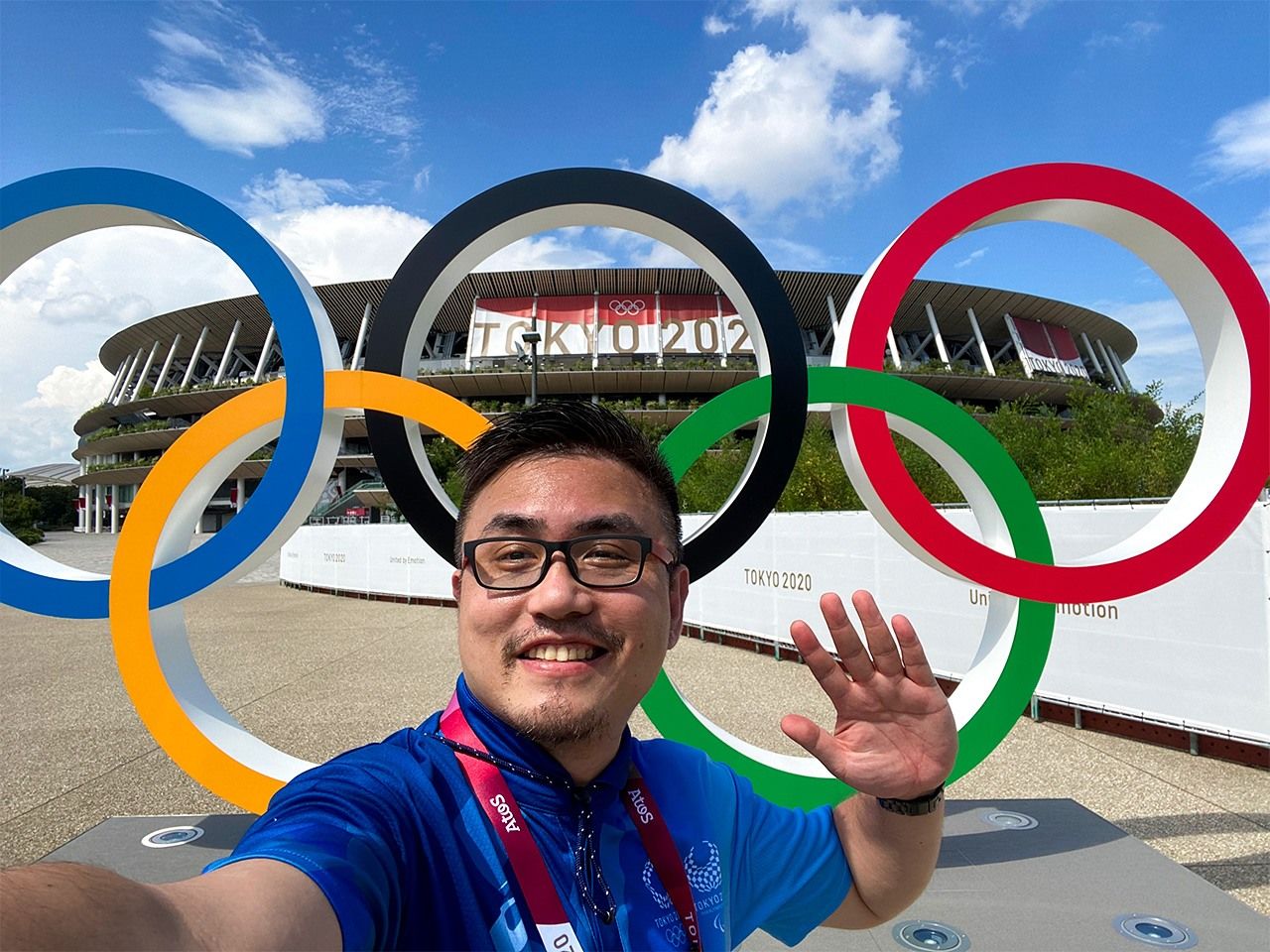 The 17-day Games were a demanding experience for the volunteers as well as the athletes.

It was my pleasure to be selected as a technical assistant responsible for setting up the starting blocks before each sprint event and removing them within 20 seconds after the start to avoid obstructing the runners. This seemingly simple action proved to be anything but simple.

The blocks were heavier than we expected, as they included sophisticated sensors. They had to be handled delicately, but whether we were placing them on the track or removing them, our work had to be completed within 20 seconds, including the time spent carrying the blocks from the storage area to the fixed points. We couldn’t make any mistakes. The days we spent training were pretty stressful, but we didn’t give up easily. Even if it was hot and muggy, and the metal blocks were heated up by the burning sunshine, none of us complained.

Of course, unpredictable situations can occur, and the runners behaved unpredictably after their competitions, at times making the block removal a challenge. But as our job required us to sit on benches along the track so that we could complete our tasks as fast as possible, we enjoyed the races from truly “first-class” seats where we could see the world’s elite athletes receiving the baton, shouting, and running right before us. Their facial expressions and even the drops of sweat on their foreheads could be seen clearly.

Due to our neutral status as volunteers, though, we were not allowed to yell, cheer, or express any feelings other than a poker face. Still, I will never forget the excitement we all felt when the starting pistol went off, and just as Olympians were charging forward on the track, we volunteers were running toward the starting blocks as though we were also competing. 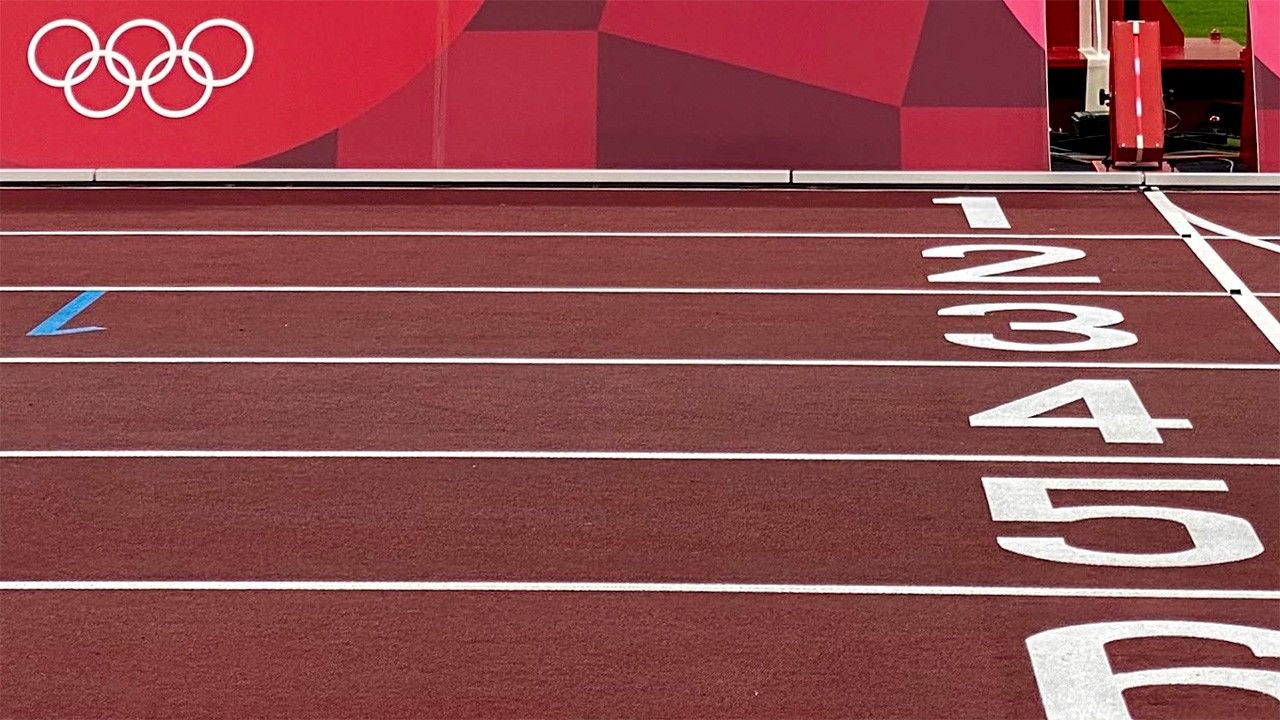 Volunteering on the track requires a high level of responsiveness and quick disassembly and assembly of equipment.

My Olympic experience also included more sedate, yet emotionally engaging work for the athletes—identification control between the warm-up areas and the event arenas, ensuring that the Olympians could check in and go on to their events more smoothly.

Since checking the ID card of each athlete was required, I had the chance to speak with the competitors, giving me plenty of eye contact with them. Even if they were wearing masks, it wasn’t difficult to see the loneliness and frustration in their eyes, especially for those who competed alone. At those moments, I couldn’t help but scan the names on the uniforms so I could give them a silent cheer.

In this crowded aisle, I could directly feel the sentiments of the athletes—their nervousness in the warm-up venue, their last hugs with coaches at the entrance of the tunnel, and all the emotions from thrill and happiness to regret and misery after the competition. While some came back excitedly with medals, others sobbed with their heads down. All these feelings flowed through me and my colleagues from time to time, making us feel the same ways.

The most deeply touching scene I saw was an athlete, who had been injured during the competition, being pushed back in a wheelchair while crying uncontrollably. Although the whole venue was noisy, it was as if the space and time around the athlete stood still, and the silence was chilling. 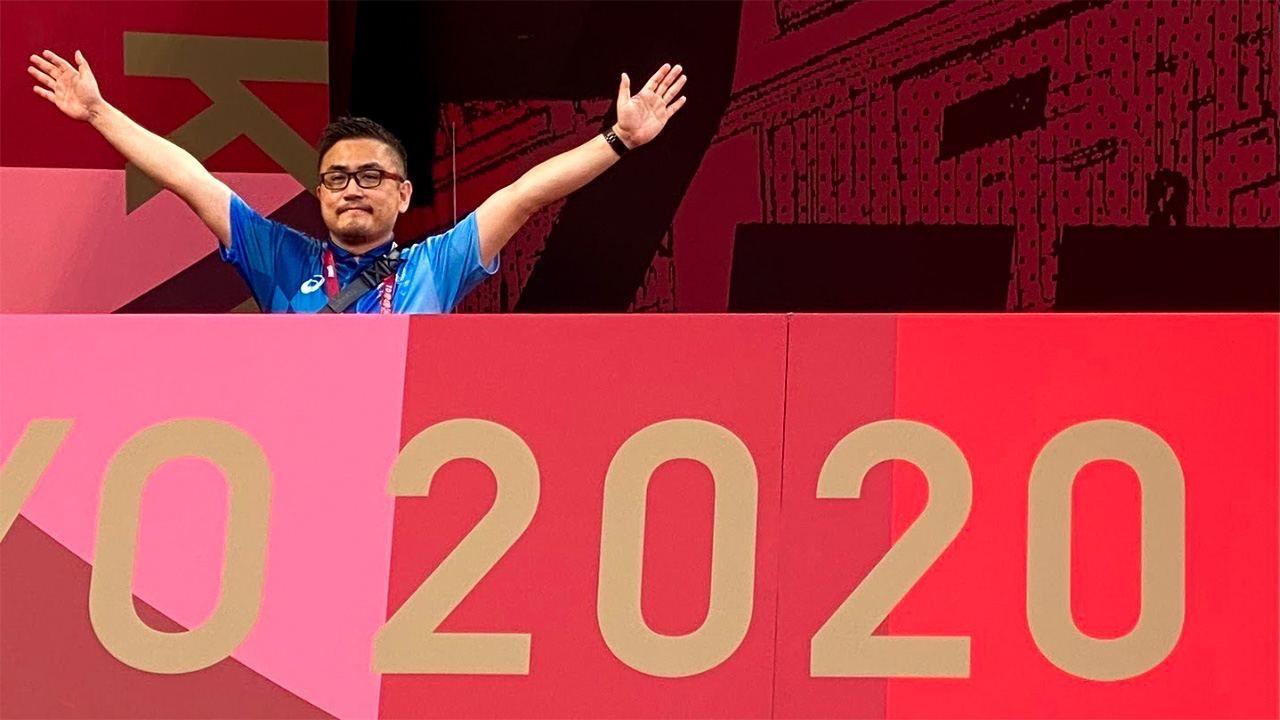 There are things you can feel only when on the field.

In the men’s 400-meter relay final, there was also an incident in which Japanese runners were disqualified due to a baton-handling mistake. Most of the Japanese volunteers and staff were shocked, standing there with their mouths open. My workmate next to me even held his head and screamed, unable to accept this failure. But when I saw that the four Japanese athletes had grouped and were encouraging each other, I understood that since the contestants faced their mistakes head-on, shouldn’t we, as the audience, give them our heartfelt cheers? These athletes were giving their utmost in competition, never giving up. It made me want to do the same.

The Perfect End for the Olympics 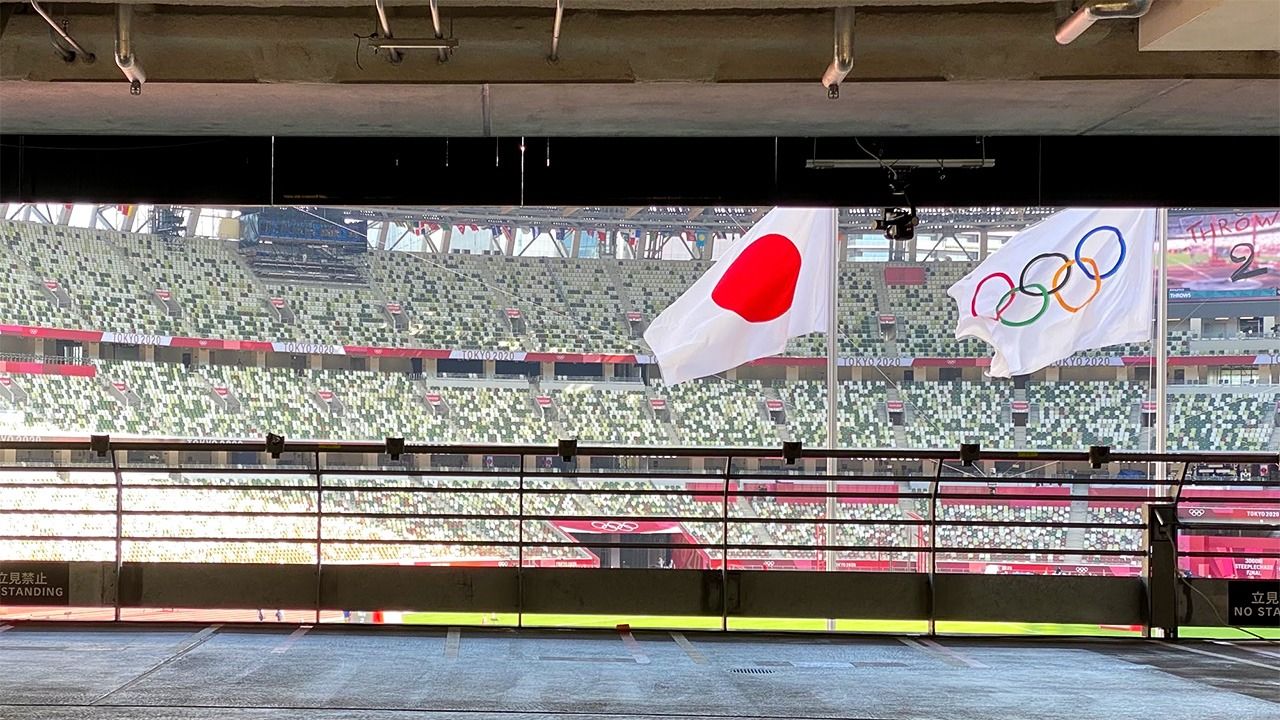 Instead of watching the closing ceremony inside the arena, I enjoyed the show in the square together with my volunteer friends.

On the closing day, all the contestants, having finished their competitions, looked more relaxed than ever before. After seeing my uchiwa, a traditional Japanese fan, several energetic youngsters responded to me with enthusiasm. The atmosphere was pleasant, but my volunteer trip had finally come to an end, and it was hard to part with this amazing experience.

Instead of watching the closing ceremony in person, I ended my Olympic adventure in my own style. I sat in the plaza next to the venue with a few of my volunteer friends, watching the stadium from afar while watching the ceremony broadcast on my phone. When the fireworks went off, we cheered—for the athletes and the games, but also for our own efforts over the past weeks.

The Tokyo Olympics were undoubtedly a shot in the arm for the world in the pandemic era. I hope we can work together to overcome the COVID-19 situation and enjoy the next Olympic Games in Paris! 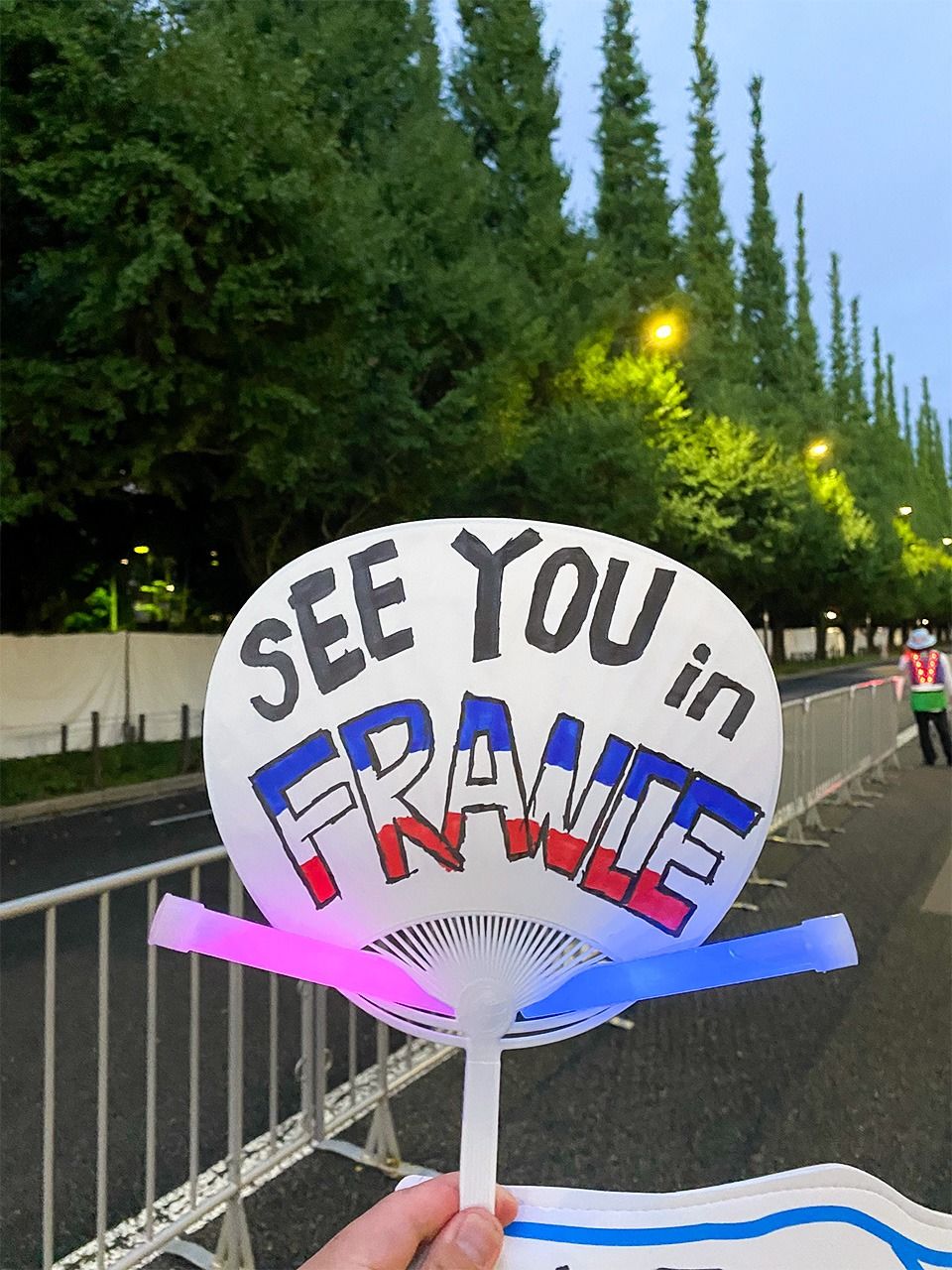 My uchiwa fan for the final day of the games. Goodbye, Tokyo! See you in France!

(Translated from Chinese by Leung Thomas King Tong as part of a Nippon.com internship program with Ritsumeikan University. Banner image: The author volunteered to help out of his love for Japan. All photos courtesy of Yao Hsuan-Hung.)