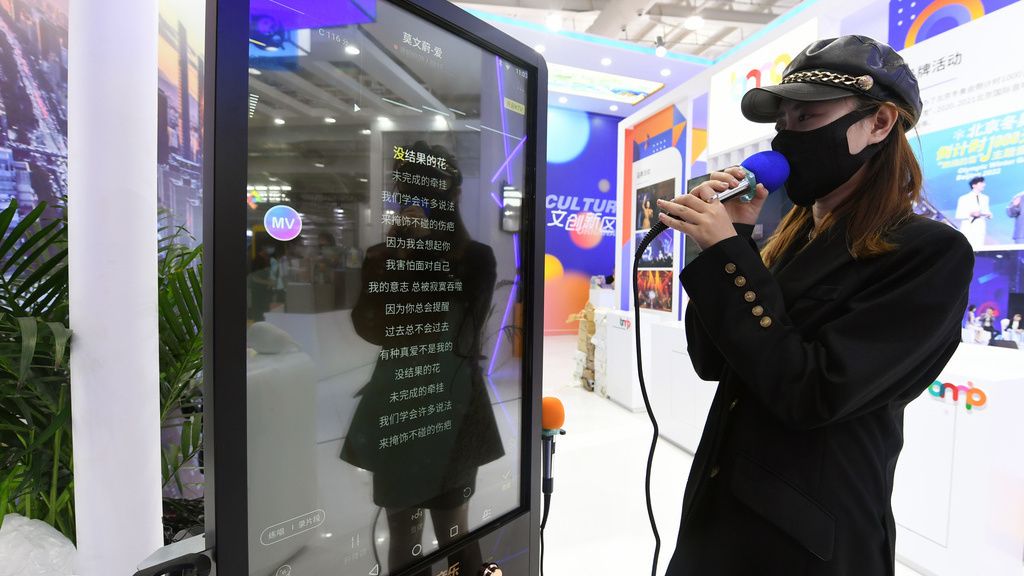 Karaoke: Past, Present, and Future

Culture Entertainment Nov 2, 2021
Karaoke was born some 50 years ago in Japan, where it has become an indelible part of the landscape. Although COVID-19 has put a damper on the fun, this form of entertainment remains popular. A business specialist looks into the origins, evolution, and postpandemic possibilities for the global pastime of karaoke.

Even with the pandemic, the karaoke business is still making news. Important topics include temporary or permanent closures of karaoke businesses, an increase in at-home karaoke, the transformation from solo karaoke to “non-singing” karaoke, and even the transformation of karaoke booths to multi-use spaces for remote work and other purposes. At the same time, some are taking a fresh look at the benefits of karaoke in nursing care, due to worries about worsening dementia in older patients who no longer have access to the karaoke establishments they used to frequent.

According to the Karaoke White Paper 2020, a report by the All-Japan Karaoke Industrialist Association, the pre-COVID 2019 market scope for singing/drinking establishments (including bars with karaoke equipment) was around ¥151.3 billion, karaoke booths around ¥379.8 billion, and other venues offering karaoke services around ¥45.6 billion, for a total market of around ¥576.5 billion. In addition, if we add up software companies’ sales of ¥70 billion, content distribution of ¥272.7 billion, and fees for karaoke apps for smartphones, car navigation systems, and other home uses, we can put the overall scale of the karaoke business at nearly ¥1 trillion a year in Japan.

The Origins of Karaoke

The word karaoke is a coinage whose origin is related to the Takarazuka Revue theater troupe. In 1956, the group’s orchestra went on strike, and with public performances about to be canceled, the theater management asked Matsushita Electric Company to provide recorded materials to supply music for the performance. The show went on, but the orchestra pit was empty. In other words, it was a kara (empty) oke (orchestra). 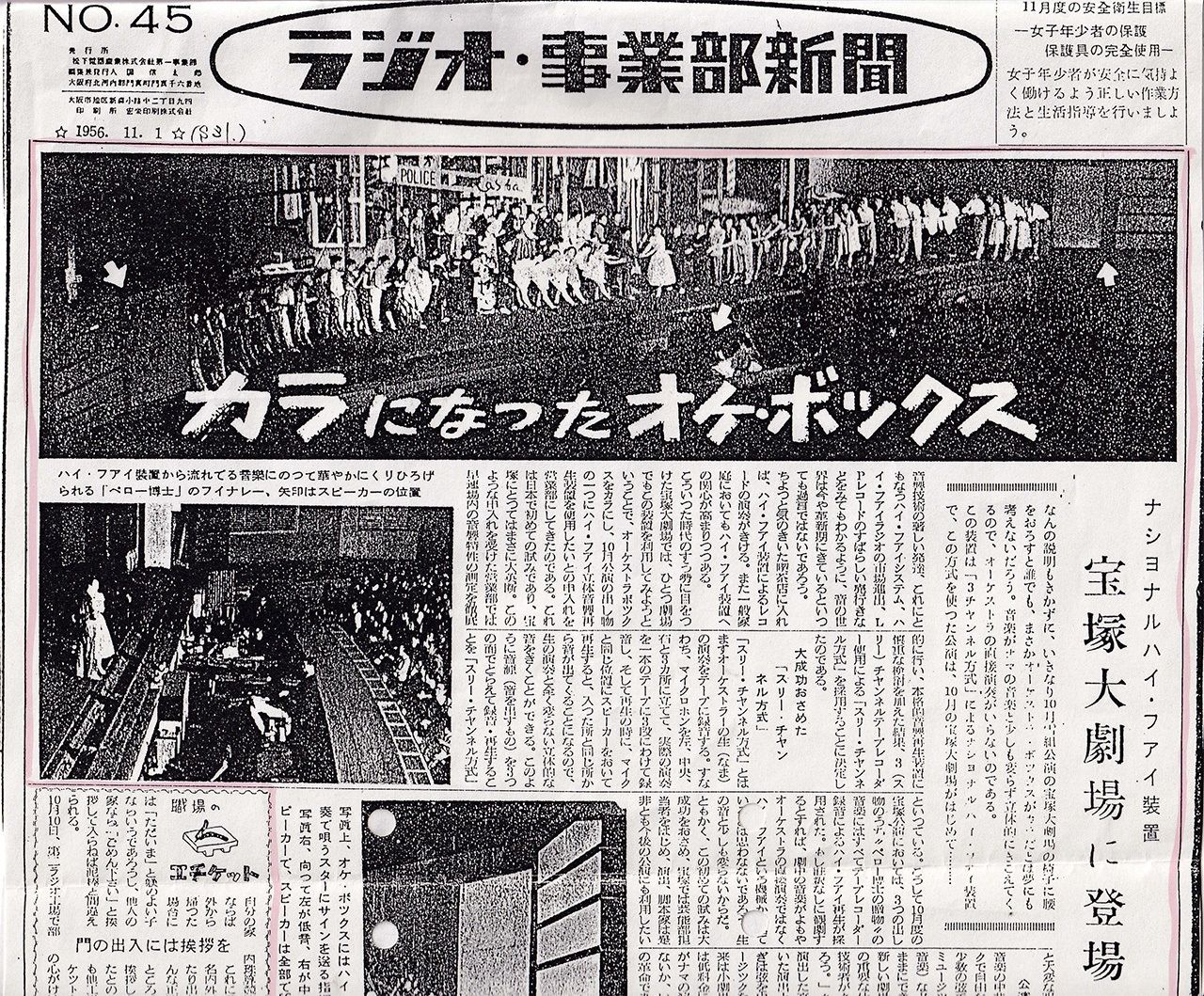 A report on the Takarazuka Revue’s use of Matsushita equipment to replace their absent orchestra in the Rajio-Jigyōbu Shinbun (November 1, 1956). (Courtesy Maekawa Yōichirō)

There is no way to identify a single karaoke inventor. Modern karaoke equipment is a complex interplay of hardware, software, systems, and services, each of which have many inventors and developers, so there is no one person responsible for the phenomenon. Instead, I have chosen 12 people who contributed to the “dawn of karaoke,” from 1965 to 1975.

The first is Negishi Shigeichi, who added recording and mixing capabilities to an automotive 8-track car stereo. The second is Hamasaki Iwao, who helped invent the Juke (Box), which let singers perform their own duet with a pre-recorded professional. Third is Bekku Hiroshi, who brought out a specialty karaoke machine for singing on buses. The fourth is Yamashita Toshiharu, who built an 8-track recording and playback deck for training singers.

The fifth is Inoue Daisuke, who started renting out machines equipped with echo effects, mixing, coin-operated timers, and accompaniment tapes. The sixth is Takagi Kisaburō, who launched a product called the Karaoke Juke to provide the songs he felt were lacking due to a shortage at the time of women employees at evening entertainment bars, called “snack bars” in Japan. The seventh is Natsuaki Yuzō, who developed a means of queuing up individual songs on prerecorded tape. Eighth is the composer Endō Minoru, who founded Minorophone, a record company that released albums with karaoke versions alongside the regular versions.

Ninth on the list is Tobiya Kura, who began mass-producing and selling karaoke tapes. The tenth is Ozaki Mitsunori, who made the company Teichiku Entertainment Japan’s karaoke leader by pioneering karaoke record and tape sales. Eleventh is Kezuka Shōnosuke, who founded the All-Japan Karaoke Industrialist Association. And twelfth is Hoshi Tadahiko, who founded Daiichi Kōshō, today a giant in the karaoke industry. Their unwavering entrepreneurial spirit and innovation all helped to create the culture and industry of karaoke.

Karaoke is a prime example of what Austrian Economist Joseph Schumpeter (1883–1950) describes as a long wave of innovation based on the interplay between new structures, systems, technologies, and services. He says that societies “surf” waves of innovation that come every 10 years, which remake business models and create new culture.

We can say that karaoke began in the latter half of the 1960s, when a mic attached to an 8-track cassette player let bar patrons sing along with popular songs. Then, in the early 1970s, musical content marketed with karaoke in mind came on the scene. The earliest medium for karaoke was 8-track tapes, which had mostly been used in car stereos, where they fell out of favor once cassette tapes gained widespread use; an obsolete technology thus found a new use. 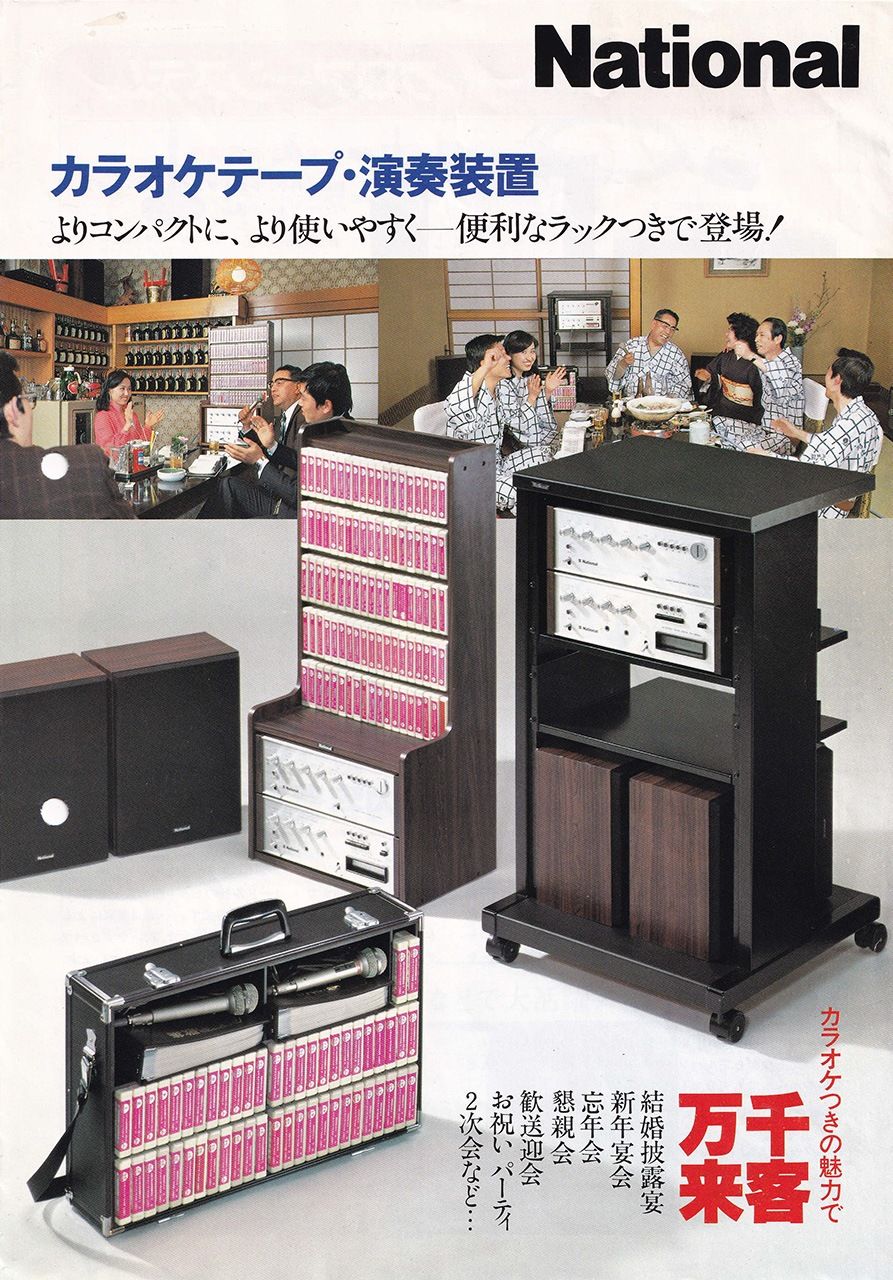 An advertisement for an 8-track-tape-based karaoke machine meant for commercial use. (Courtesy Maekawa Yōichirō)

Laser discs came on the scene in the early 1980s, allowing videos and music lyrics to be displayed together; this new technology could also alter the color of the lyrics as the song progressed. The original karaoke “boxes,” which were cargo containers with automatic karaoke machines that charged ¥100 per song, became very popular in the mid-1980s. Karaoke had once been limited to older men singing at bars, but this new development opened the market to younger customers all day long. Right around that same time, ISDN data lines were opened up for public and commercial use, bringing about an era of network-connected karaoke machines. 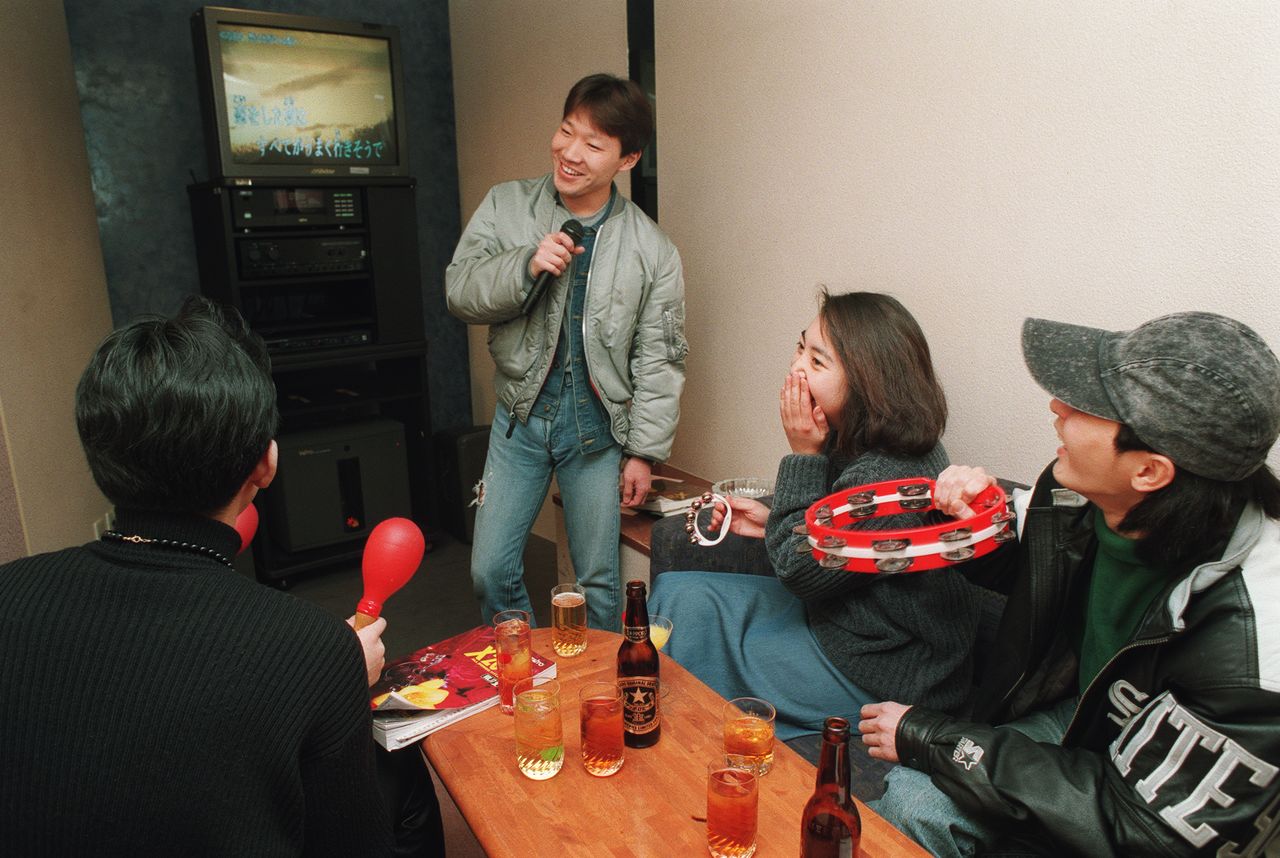 With the release of karaoke machines that could download data from host computers, new song purchases became much faster, and the number of available songs grew dramatically. The system took off almost overnight. Taken at a karaoke booth in Ginza, Tokyo, on February 13, 1995. (© Jiji)

Internet music distribution began at the end of the 1990s, and semiconductor advances ushered in the era of microphone karaoke, where memory-equipped microphones could be connected to TVs for home karaoke.

Cellphone karaoke opened up in the early 2000s. Soon afterward video streaming and video-on-demand services became commonplace, and now we are well into the smartphone karaoke age. All through this, karaoke operators have become a kind of oligopoly, with the truly competitive platforms surviving and thriving on top. Around 1996 there were 15 such companies. By 2004, eight survived. Now, there are only two: Daiichi Kōshō, with its DAM karaoke service, and Xing, with its competitor platform Joysound. 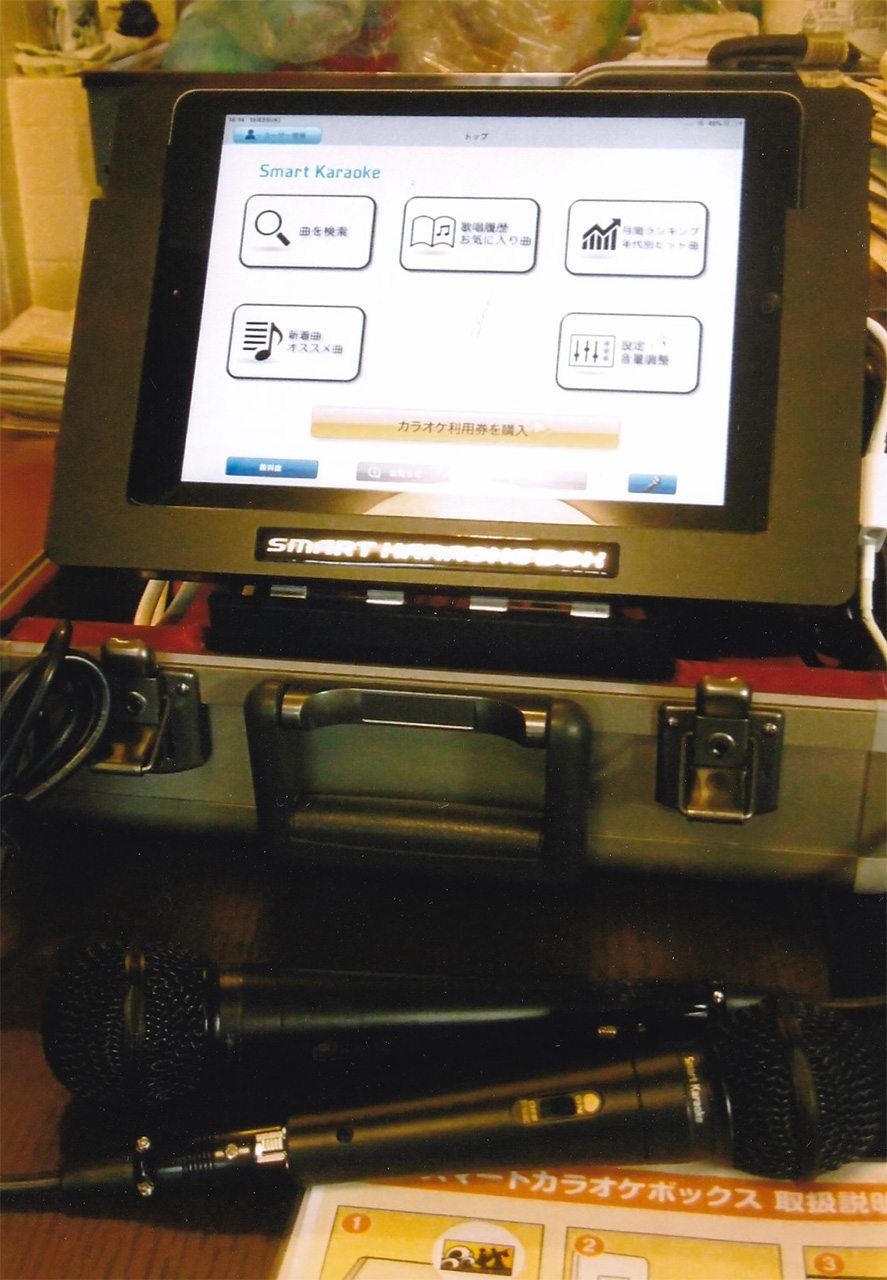 Karaoke initially spread overseas along with the increases in Japanese business and tourism travel. At first, businesses used karaoke machines imported from Japan and could only offer the same content used there, including whatever Western songs had been included in the menu. As the entertainment took root in various regions, though, the systems soon integrated local music; as local makers began producing machines, other nations and regions developed their own networks and business models.

In New York and London, karaoke has become popular at pubs and bars, where everyone enjoys the performance together, in a marked difference from Japan, where enclosed spaces for individual groups are the norm. In recent years, karaoke software for game consoles like PlayStation have also been a hit, particularly in the United States.

Asian nations like South Korea, China, and Taiwan, however, have the same affinity for more private entertainment that Japan does, so karaoke booths are as widespread in Korea and Taiwan as they are in their birthplace.

Changes in the Age of COVID-19

Karaoke has been identified as a high-risk infection spot for the airborne COVID-19 virus, and businesses offering karaoke in Japan have been asked to shorten working hours and avoid providing the services. The resulting lost income means that many have struggled to pay rent or salaries, and as a result some 10% of all the karaoke booth businesses in Japan have closed since the beginning of the pandemic.

Industry organizations are now working with medical authorities to help develop guidelines to prevent the spread of infection. They are taking pains to put up stage curtains and acrylic panels, carry out frequent and thorough disinfection, and improve ventilation. At the same time, many are using their soundproof environments as a sales point to set up miniaturized movie theaters, teleworking bases, and remote meeting spaces in an attempt to expand their business scope beyond the current limitations.

At the same time, smartphone karaoke is also taking off. The free app Pokekara rates users’ singing based on small details like pitch and vibrato and displays nationwide rankings based on the scores. Users can listen to other peoples’ performances, share their reactions, and sing along using the online component for more interactive enjoyment. Other new services are popping up all the time, and some, like Karaoke Joysound, take advantage of Amazon’s voice-recognition artificial intelligence to allow users to play a song by simply saying its name. Karaoke has thus spread even further beyond the adult-oriented bars it once occupied, and now is something people can enjoy anywhere, anytime.

It might only be a simple pastime, but karaoke is still something worth watching. It is a cultural industry that inspires communication and community all over the world, and can even help fight depression and stress. The global phenomenon of karaoke is sure to spring right back in when the pandemic is behind us.

(Originally published in Japanese. Written with assistance from Watanabe Mihiro, former head of PR at Xing, and Yamazaki Hiroyō, president of Uta no Techō. Banner photo: Visitors trying out the latest karaoke technology at the 2021 China International Fair for Trade in Services in Beijing on September 3, 2021. © Xinhua News Agency/Kyodo News Images.)