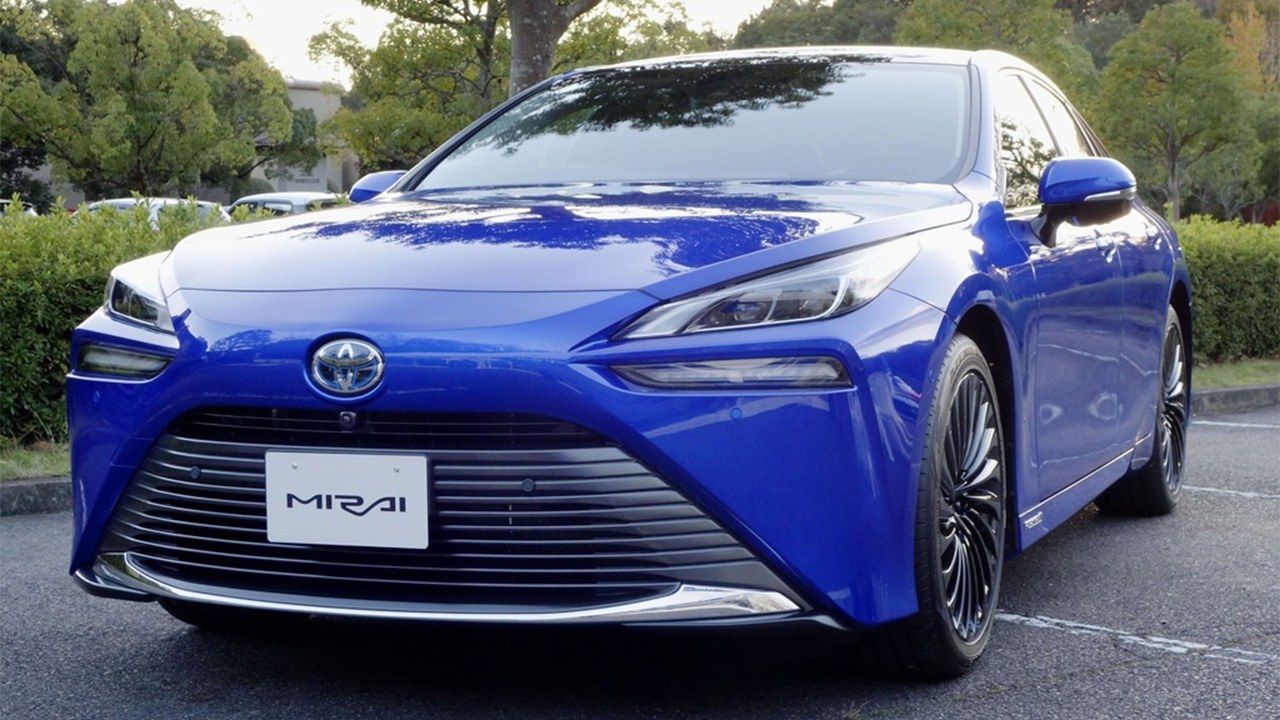 Toyota Accelerates into a Hydrogen Future as Industry Pivots to EVs

Economy Oct 19, 2021
The global EV shift is gaining momentum, with sales of electric vehicles expected to overtake hybrid cars by as early as 2022. Japanese automakers have so far remained minor players in the rapidly expanding zero-emissions car market. Toyota is aiming to make up some of the distance with the newest version of its fuel cell-powered Mirai while also partnering with other Japanese firms to bring hydrogen technology to the fore.

Moving Ahead with Hydrogen

The Tokyo Olympics and Paralympics was a chance for Toyota, which enjoyed the coveted status of worldwide partner of the games, to show off its newest advances in transportation technology. The pandemic dampened the Japanese automaker’s efforts, forcing Tokyo 2020 to be postponed a year and then compelling the firm to pull its Olympic-related advertising campaign out of consideration for the direness of the coronavirus situation.

Despite these setbacks, Toyota drew attention to its fleet of some 3,700 official vehicles, 90% of which were either fully or partially electrified, as helping significantly reduce the carbon footprint of the games. Alongside hybrids like the Prius and electric vehicles such as the self-driving e-Palette transportation pod, Toyota also deployed 475 of its hydrogen fuel cell-powered Mirai.

Hydrogen is expected to play an increasing role as nations move away from fossil fuels in a bid to reduce carbon emissions. However, demand for fuel-cell models of passenger cars remains low, with carmakers instead focused on capturing a greater share of the rapidly growing EV market. Even with new technological advances, Toyota faces huge hurdles in marketing the Mirai as an alternative to battery-powered EVs, but remains determined to forge ahead with its hydrogen strategy.

Prime Minister Suga Yoshihide, in officially setting Japan’s goal of reaching net-zero emissions by 2050, emphasized hydrogen as a “key technology” in the effort. The government plan includes the aim of having “electrified vehicles,” a broad category that encompasses any car propelled by an electric motor, hybrids included, account for all new auto sales by 2035. Bolstering the ratio of fuel-cell electric vehicles (FCEVs) like the Mirai will require heavy investment in the country’s hydrogen infrastructure. The government has pledged to increase the current number of fueling stations from 150 to 1,000 while also boosting the domestic supply of hydrogen to as much as 3 million tons by 2030, with the goal of expanding this to 20 million tons by 2050.

Toyota grabbed headlines with its 2014 launch of the Mirai, one of the first FCEVs to be commercially available. Since then, though, the automaker has struggled to carve a niche for the model, selling only around 11,000 units globally to date. One factor has been the Mirai’s eye-popping ¥7.4 million price tag (roughly $67,000), which has put it out of the range of average car shoppers. The low number of hydrogen fueling stands in most countries has also tarnished its appeal compared to other zero-emission vehicles. Low production volume has been another strike against the model, with Toyota only being capable of manufacturing some 3,000 units annually.

The carmaker made progress in addressing some of these issues when it released the second-generation of the Mirai in December 2020. Toyota redesigned the fuel cell system to have fewer principal components and revamped other aspects of the car, enabling it to cut production costs by two-thirds and boost manufacturing capacity to 30,000 units a year. The new Mirai also has a 30% longer range, traveling up to 850 kilometers on a single tank, boasts a longer and wider chassis, and can carry five adult passengers, one more than its four-seater predecessor. The sticker price of ¥7.1 million still makes it a formidable investment, but for consumers in the market for a luxury sedan, its quietness, power, and stylish design make it an attractive option.

Since April 2021, the Mirai has come equipped with Toyota’s new Advanced Drive driver-assistance software. The system includes safety features like helping drivers to maintain distance from other vehicles and to change lanes while on expressways. The company plans to roll out new functions and improve performance with regular software updates.

Toyota has high expectations for the model. Mirai chief engineer Tanaka Yoshikazu has lauded the design of the car, drawing attention to its roomy interior and drivability, and Toyota’s operating officer Maeda Masahiko has touted the vehicle as paving the way for future generations of FCEVs.

The Mirai is just the tip of the iceberg of Toyota’s hydrogen strategy. The company has begun to offer a compact module of its fuel cell system featured in the car to companies that are developing and manufacturing fuel cell products in an attempt to give them a leg up as a means to promote the use of hydrogen across sectors. It designed the module to be easily utilized by a range of manufacturers, including makers of equipment like stationary generators as well as companies in the transportation industry, such as builders of trucks, buses, trains, and ships.

In March of this year, Toyota also announced a partnership in commercial vehicles with subsidiary Hino Motors and Isuzu Motors to accelerate the application of advances in what the company has labeled as CASE technologies, covering fields like autonomous driving and electrified vehicles. In July, Suzuki and Daihatsu declared they were joining the collaboration, expanding the potential application of Toyota’s fuel-cell technology from large trucks to small commercial vehicles.

Toyota aims to sell 8 million electrified vehicles in 2030, including 2 million EVs and FCEVs. However, it is also exploring new applications for hydrogen. In May, the company entered a hydrogen engine-equipped Corolla in the Fuji Super TEC 24 Hours Race at the Fuji Speedway in Shizuoka Prefecture. The three-cylinder vehicle was fueled with hydrogen produced from renewable sources at the Fukushima Hydrogen Energy Research Field, a facility recently opened in Namie, Fukushima Prefecture, as part of the government’s roadmap to bring hydrogen energy to the application stage.

Unlike a fuel cell, which relies on the chemical reaction between hydrogen and oxygen to create electricity, a hydrogen engine burns the element in much the same way as a conventional gasoline motor. Hydrogen engines are appealing for a variety of reasons, not least of which is the ability of automakers to rely on existing combustion engine technology. A number of hurdles still need to be cleared before Toyota can make a commercial model available, including boosting power output and designing components to withstand the high temperatures of hydrogen combustion. However, the field offers component makers who are seeing their livelihoods threatened by the shift to EVs new business prospects and promises drivers a more traditional driving experience compared to quieter electric motors.

Over the summer, the hydrogen Corolla ran in a two-day event at the Autopolis speedway in Ōita Prefecture that was part of the Super Taikyū endurance racing series. Toyota procured the hydrogen for the race from a plant operated by general contractor Ōbayashi Corporation that is part of the firm’s pilot program aiming to demonstrate the feasibility of producing hydrogen using geothermal energy and shipping it over ground routes.

The plant, located in the mountains of Ōita, taps into superheated hydrothermal sources some 700 meters below the surface to turn turbines, with the resulting electricity used to create hydrogen. Ramping up production of so-called green hydrogen, which is made without fossil fuels, has been hampered by the unreliability of renewable energy sources. However, the Ōbayashi project, which also provides hydrogen to refueling stations around Kyūshū, looks to provide a green model of local production for local consumption.

A First in Shipping Hydrogen

Toyota has also used its Corolla racer to explore ways of procuring hydrogen from overseas sources. For an endurance race in September at the Suzuka track in Mie Prefecture, Toyota used hydrogen from Australia produced at low cost from lignite, a low grade of coal.

The plant producing the hydrogen is part of a pilot project involving firms like Kawasaki Heavy Industries, Iwatani Corporation, and the Electric Power Development Company, which operates under the name J-Power, to develop an international supply chain for liquefied hydrogen. In 2022, Toyota plans a trial shipment of hydrogen from Australia to Japan using a pioneering liquefied hydrogen carrier, the Suiso Frontier, built by Kawasaki Heavy Industries.

The Suiso Frontier is capable of transporting liquefied hydrogen, cooled to minus 253 degrees Celsius until it is 1/800 of its volume as a gas, over long distances. Kawasaki Industries anticipates transportation of liquefied hydrogen will be commercially viable by 2030 as more of the necessary infrastructure is built.

The vessel will be carrying what is called grey hydrogen, which is made from carbon-emitting sources like coal and natural gas. It is less environmentally friendly than blue hydrogen, which is derived from methane with the subsequent emission being captured and stored underground, but is less costly to manufacture. Both varieties will be essential in meeting the growing demand for hydrogen in Japan until more sources of green hydrogen made from renewable energy can be secured.

The worldwide shift toward EVs is picking up pace, driven by ambitious environmental policies of governments like the European Union, which proposes to ban sales of new gasoline- and diesel-powered cars by 2035. Global giants like Mercedes-Benz and Volvo have announced plans to switch their focus to EVs. At the same time, a growing number of tech companies and other firms outside the auto industry are venturing into electric vehicle production, ensuring a competitive EV landscape ahead.

Far from jumping on the EV bandwagon, though, Japanese carmakers like Toyota, which has been successful with its hybrid vehicle strategy, are keeping their options open by leveraging their advanced technologies, including hydrogen. As the EV field heats up, Toyota is betting on hydrogen to remain competitive in the rapidly expanding zero-emission car market.