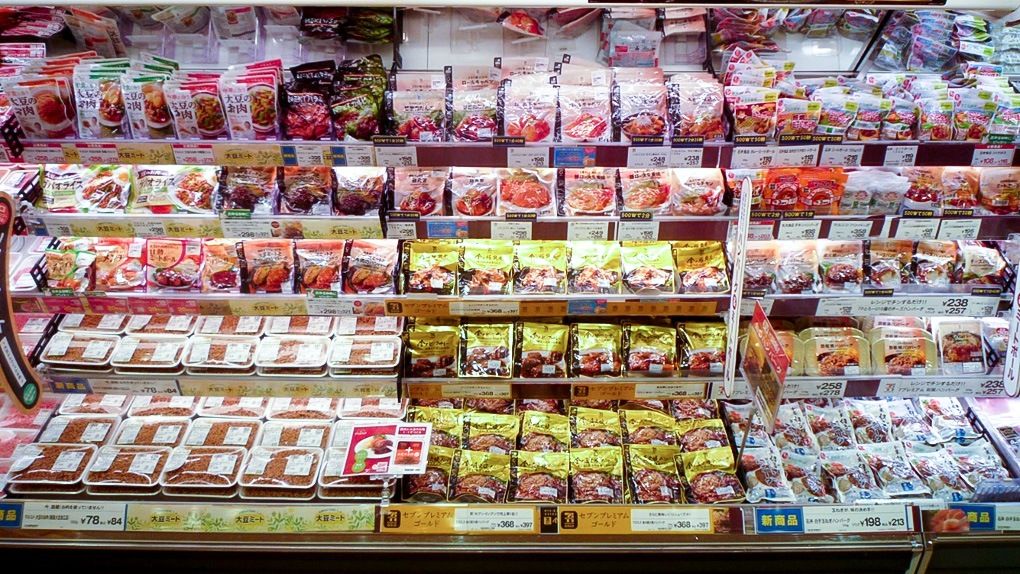 A Short History of Meat Alternatives

Europe and North America have long had more vegetarian and vegan consumers than Japan, and so plant-based meat alternatives, usually made from soybeans, are much more common there. Many start-ups have appeared in the rapidly expanding meat substitute market, riding on the recent rise in environmental awareness. The new foodstuffs have become so common that even fast-food giants like McDonald’s and Kentucky Fried Chicken have begun offering meat-alternative products.

Meat replacements made from processed vegetable matter have over 100 years of history. According to the report Daitainiku no kaihatsu to kongo no tenkai—Shokubutsu niku to baiyōniku o chūshin ni (The Development and Future Growth of Meat Analogues: A Focus on Plant-Based and Lab Cultivated Meat) by Endō Masahiro, head of the Agriculture, Forestry, and Environment Division of the National Diet Library, cornflake inventor John Harvey Kellogg was awarded a patent in 1907 for making a food with meat-like texture and aroma from wheat gluten and milk casein.

It would appear that the real spark for meat alternative research was lit by research from the United States chemist Robert Allen Boyer, though. He devised a process to give soy protein a texture closer to that of edible meat by binding it into fibers like those seen in animal muscle. He was awarded a patent in 1954, and food manufacturers in the United States soon began creating products based on Boyer’s process. However, they never achieved widespread market penetration, because although the texture was similar to that of meat, the appearance and aroma were not.

However, in the twenty-first century, advances in processing technology and additives helped meat replacements approach actual meat in new ways, including texture, appearance, and flavor, and they began to grow more popular. Two companies in particular are pushing these advances to spearhead the new faux-meat boom. Beyond Meat, established in 2009 and listed on the Nasdaq index in 2019, and Impossible Foods, established in 2011, ushered in huge advances in meat alternative technology and growth. On a side note, Microsoft founder Bill Gates has invested heavily in both companies.

Experts now say that global livestock farming around the world produces 15% of CO₂ emissions worldwide, and the livestock industry is a major contributor to environmental destruction through deforestation, greenhouse gas emissions, and excessive water consumption. One reason for the increased support for meat alternatives is that gradually replacing animal meat with plant-based alternatives could reduce CO₂ emissions and help protect the environment.

According to the US-based magazine Business Wire, the world market for meat alternatives could reach $14.9 billion by 2027, up from $5.6 billion in 2020. There is also data showing that the global meat industry percentage taken up by meat alternatives will increase to 10% by 2029. These predictions have had an impact on investors and major manufacturers alike. The market is booming, with related stocks surging, investments rolling in, and new companies entering the market.

2020: “Year One” for Meat Alternatives in Japan

In Japan, despite a surge in plant-based meat alternative development in the late 1960s, the products did not see any widespread adoption. There has, however, been a new trend over the last few years. From 2019 into 2020, startups began releasing new products one after the other, and major food producers have also joined in. The Ministry of Agriculture, Forestry and Fisheries has promoted meat alternative adoption by establishing the and the Council for Public-Private Partnership in Food Technology, which brings in academic and private sector collaboration, both in 2020.

Japanese startup Next Meats, founded in June of 2020, has adopted the slogan and is stressing environmental themes for its business. Makino Yūya, the company’s PR head, has described 2020 as the dawn of a new era for Japan’s meat-alternative market.

“In 2020 we saw such drastic changes in the market that we can call it ‘year one’ for our industry. Supermarkets have moved soy-based meat alternatives from hidden corners to shelves right beside the real meat, and major food manufacturers and fast-food chains are entering the market. These trends are continuing in 2021.” Indeed, this year has seen the company’s sales and brand recognition growing at a huge rate.

“Sales data from our online shop shows that as of August 2021, sales have increased 450 percent from when we launched it in October 2020,” Makino says. “Last year, the solo Korean barbecue chain Yakiniku Like began offering our meat alternatives at all of its branches, and this year, supermarket chain Itō-Yōkadō has also started selling it nationwide.

Itō-Yōkadō has expanded its soy-based meat alternative displays in general, putting them next to the meats and labelling them “soy meat.” A PR representative for the supermarket’s parent company Seven & i Holdings explains, “To meet changing customer needs, we began stocking soy meat products in our meat departments in autumn 2019. In spring 2020, we expanded stock across all shops. We offer a total of fifteen different products, although individual shop selection may differ, and we’ve had excellent customer response. In spring 2021, we began diversifying our soy meat selection with ground-meat type products for different uses.” 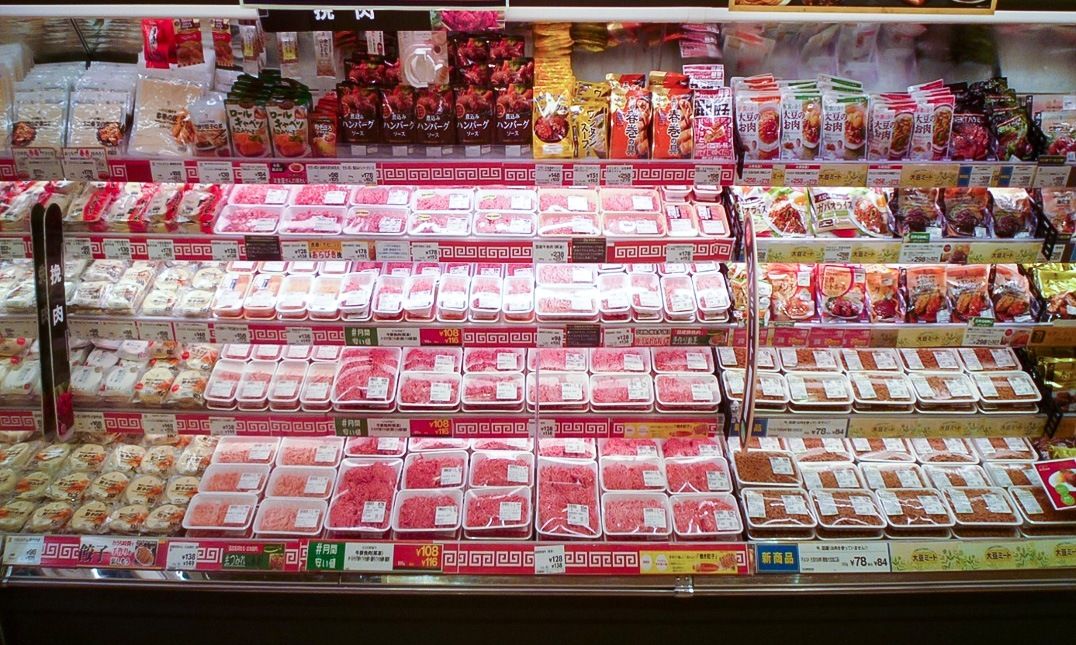 Next Meats is currently riding high on these trends, but how are consumers responding? Makino says, “We’re hearing lots of positive comments, but there is some criticism.” Positive responses include remarks like “I wouldn’t have known it wasn’t meat if no one told me,” “It’s an excellent reproduction,” and “It’s easy to eat and not overfilling.” Criticisms, meanwhile, include “the texture still isn’t perfect” and “it’s unaffordable.”

So, just how is the quality of meat alternatives on the Japanese market? I chose three products from among the many available in Japan to compare them with “the real thing”: a precooked frozen food, a fast-food product, and a product from a meat counter. 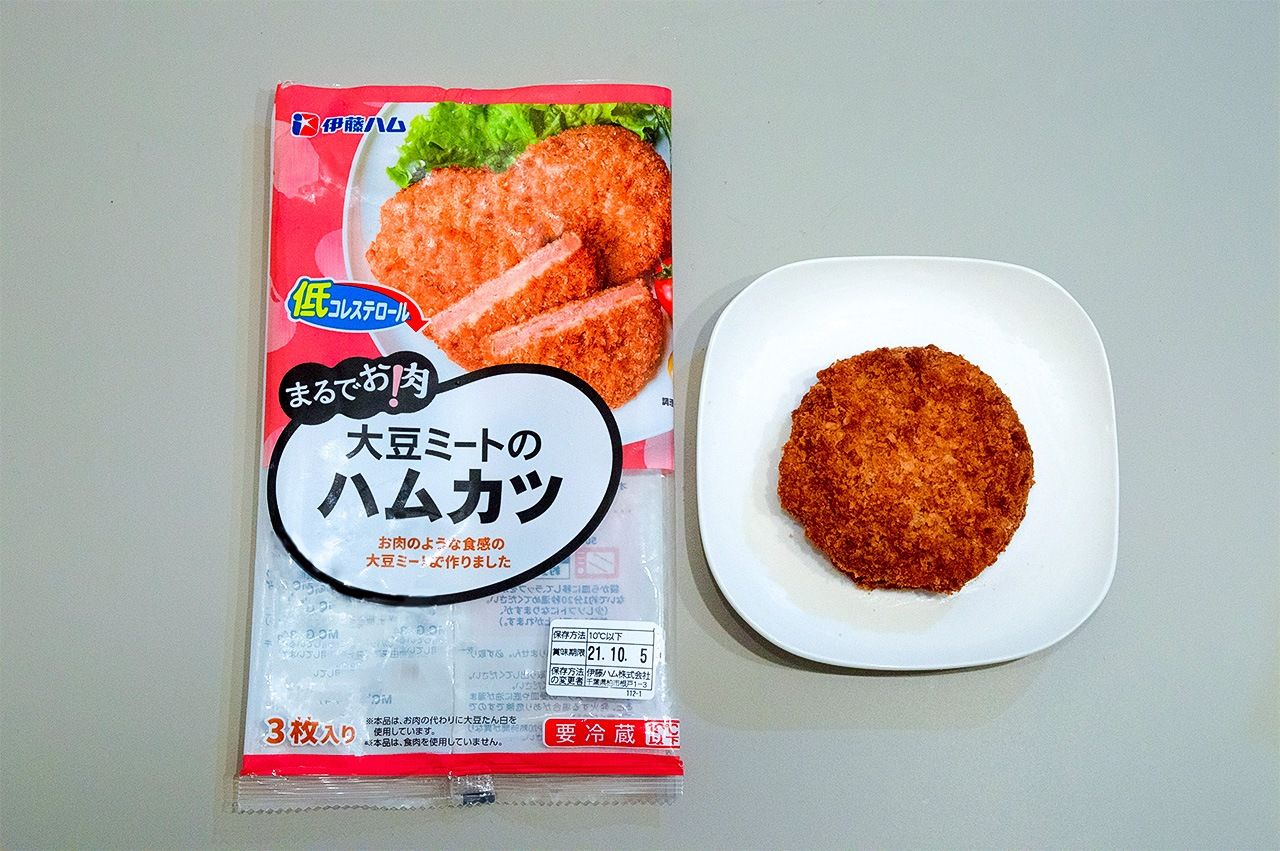 This is part of a full range of products from major ham and sausage manufacturer Itō Ham. The Maru de Oniku! (Just Like Meat) series is popularly considered to be quite close to the original, and these soy-based ham cutlets are extremely close to meat-based versions.

When I compared both versions side by side, I found that the soy version reproduced the firm, juicy texture of the meat version well, and the soy and meat versions were nearly indistinguishable. If I had not already known it was soy based, I would not have been able to tell. At over ¥400 for a three-pack, it’s rather expensive, but it is well within reach of most consumers. 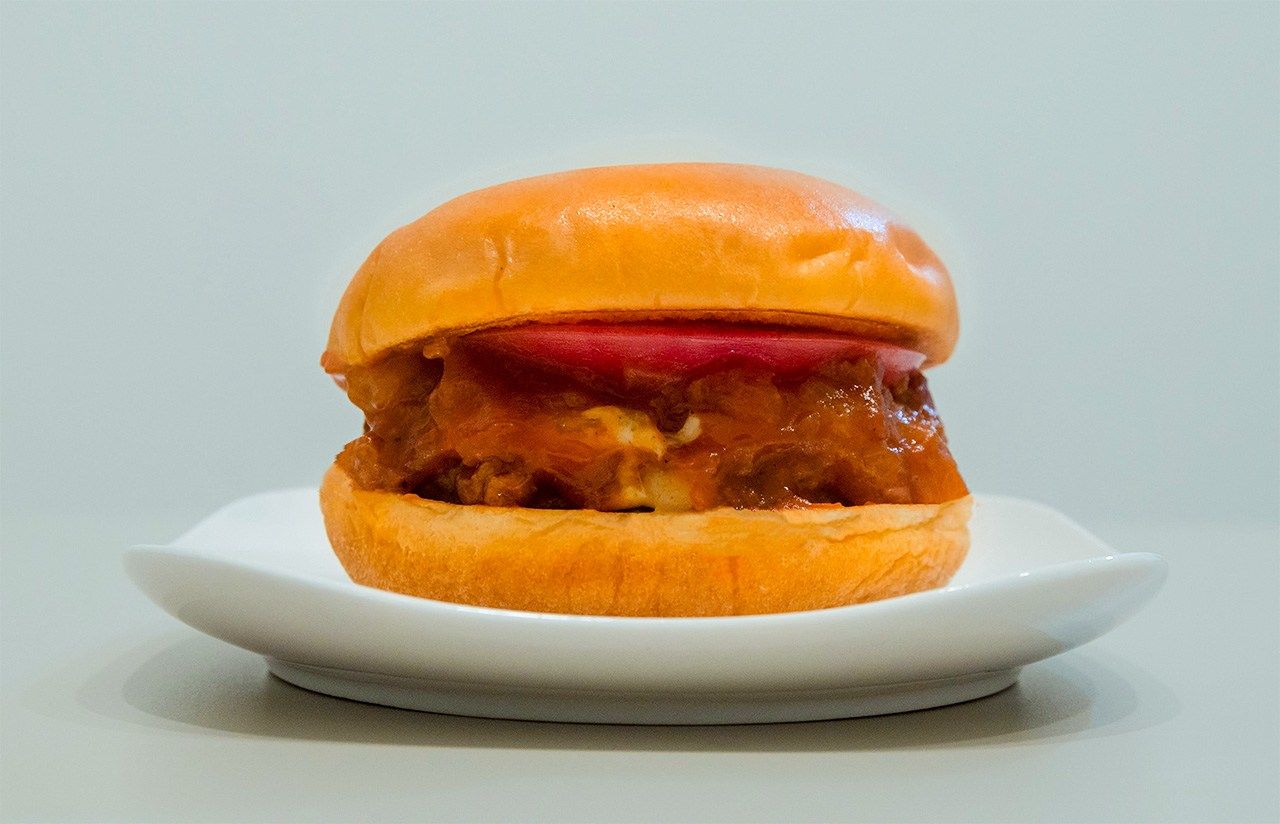 Major Japanese fast-food chain MOS Burger’s Soy MOS Burger is based on the company’s flagship beef product. I tasted this one alongside the original as well, and it has all of the meat version’s rich umami flavor. The texture and appearance are nearly identical to the original MOS Burger, and the only difference I could detect was that the aftertaste seemed lighter. They are now available at branches all over Japan for the same price as the original, ¥390. I highly recommend it for those wanting to try a meat alternative product for a reasonable price. 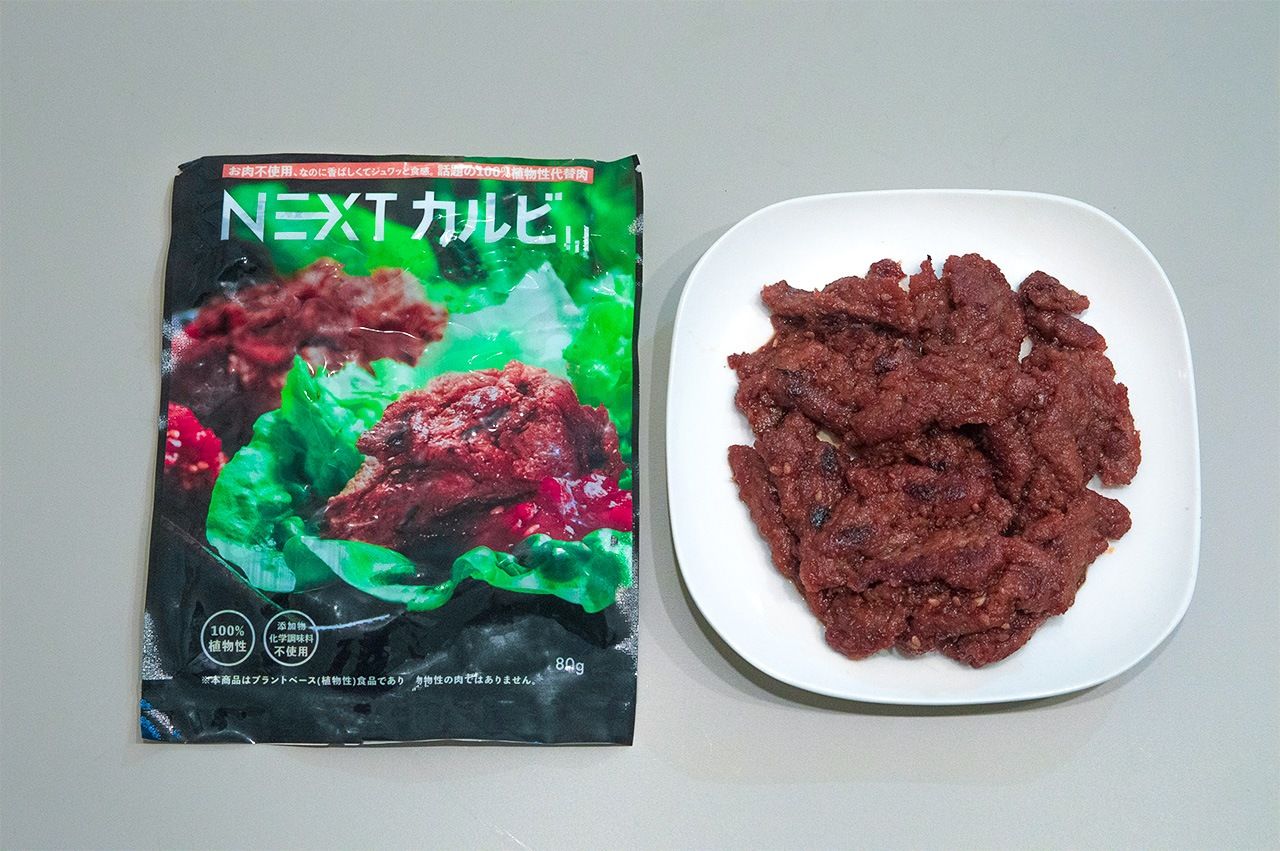 Next Meats Next Galbi 1.1 © Saitō Hayato

While many alternative meat products copy food using ground meat like hamburgers, Next Galbi 1.1 sold by Next Meats tries to compete with a cut of meat: galbi Korean-style barbecue short ribs. Next Galbi is growing quite popular for the rich, grilled meat flavor it offers after a simple sauté.

I first thought that it would be much more difficult to imitate cuts of meat like this, but I was surprised at how much this dish tasted like real galbi. Adding a yakiniku-style barbecue sauce helps bring out the meaty flavor even more. The cuts have a light, soy-like aftertaste, and naturally lack the usual oiliness of most meat, making them all the more appealing to those who find that aspect unappetizing.

After comparing the three products above with the real thing, I was surprised at how much better they were than I had expected.

Flavor the Key to Success

Next Meats’s Makino believes that the key for meat alternative popularity, no matter what country they are marketed in, is a more direct focus on deliciousness.

“The biggest issue is recreating flavor more like that of meat. We’re combining mechatronics and biotechnology to create a 100-percent plant-based version of meat that tastes even better than the original,” he says.

However, it is important to remember that meat alternatives still face many other issues, and Next Meats is focused them as well. “The price is still higher than animal-sourced meat, and there are still issues of widespread availability, particularly outside the Tokyo area. To tackle the price issue, Next Meats is now building new manufacturing plant capacity that should bring costs down.”

The company is also promoting awareness of the relationship between livestock farming and environmental issues.

“The link between factory livestock farming and climate change is contributing to the spread of meat alternatives, but it remains mostly unknown here in Japan. We’re working to spread that awareness using social media, but for us, the first priority is getting people to feel comfortable trying our products. After that, we think it’ll be fine if they come to understand the issues more naturally.”

Today the meat alternatives on the market are at the current level of simple “imitation meat,” but if they reach the stage of complete meat re-creations that are also cheaper than the original, they will become a much more common part of the Japanese diet.