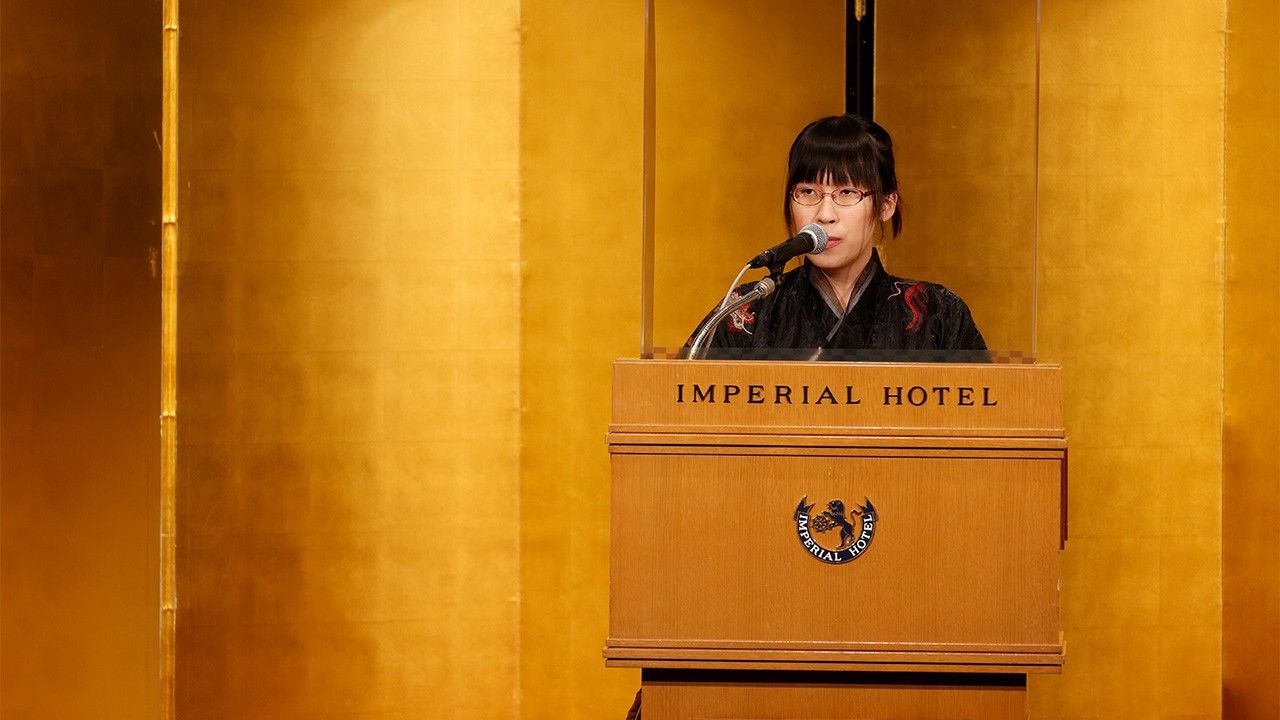 Culture Books Oct 8, 2021
On August 27, 2021, novelist Li Kotomi attended the Akutagawa Prize award ceremony as the first-ever Taiwanese winner of the prize. In her acceptance speech, translated in full here, she talked about her past struggles, how literature gave her a means of expression, and her determination not to be categorized.

Never to Have Existed

“Better if I’d never been born.” I don’t remember now when I started thinking that way. Not, “I’m sorry for being born,” but “better if I’d never been born.” As I did not choose to be born of my own free will, there is no reason to feel apologetic. I have lived my life instead with anger and despair at being thrust into the world, without knowing how best to express them.

This is a little different from “I want to die.” Having been born, I have no desire to bring about my own death, and even if I did die, this would not achieve a perfect nothingness, as it would not alter the fact that I existed. It is aggravating too just to imagine all the speculation on, interpretations of, and inquiries into my death that would follow in realms beyond my control.

In the end, the most desirable state is never to have existed, undergoing everything in life—its joy, rage, sorrow, and pleasure, and the pain of parting from loved ones.

Not Celebrated or Welcomed

What possible reason did I have to think like that? I suppose it was because I noticed the cracks in the world from when I was very young. The cracks in the world, walls of unreason, and corners where the sunshine did not reach. I was quickly made to understand that I would not become the kind of person the world celebrated and welcomed. I despaired as this realization knocked me sideways and forced me to live with a fundamental unease sticking deep inside me. Yet, I clutched at a thread of hope. I told myself that when I was older and became an adult, everything might get better.

However, that was not the case. Rather, in the process of becoming an adult, I saw the world’s malice embodied on countless occasions. That malice is excessively great, and individuals inordinately tiny. And the world never admits its mistakes. No matter how many people are trampled underfoot, tormented, driven to the depths of despair, or buried in death’s darkness, the world just keeps turning, as if nothing had happened. Everything is brushed aside as the fault of individual frailty. Faced with this unknowable beast, outrageous to the point of absurdity, it is reasonable to freeze instinctively, tremble, and seek death’s release. Targeted by malice and hostility, plagued by derision and calumny, having become a mass of wounds, I myself have wandered the edge of the abyss of death. 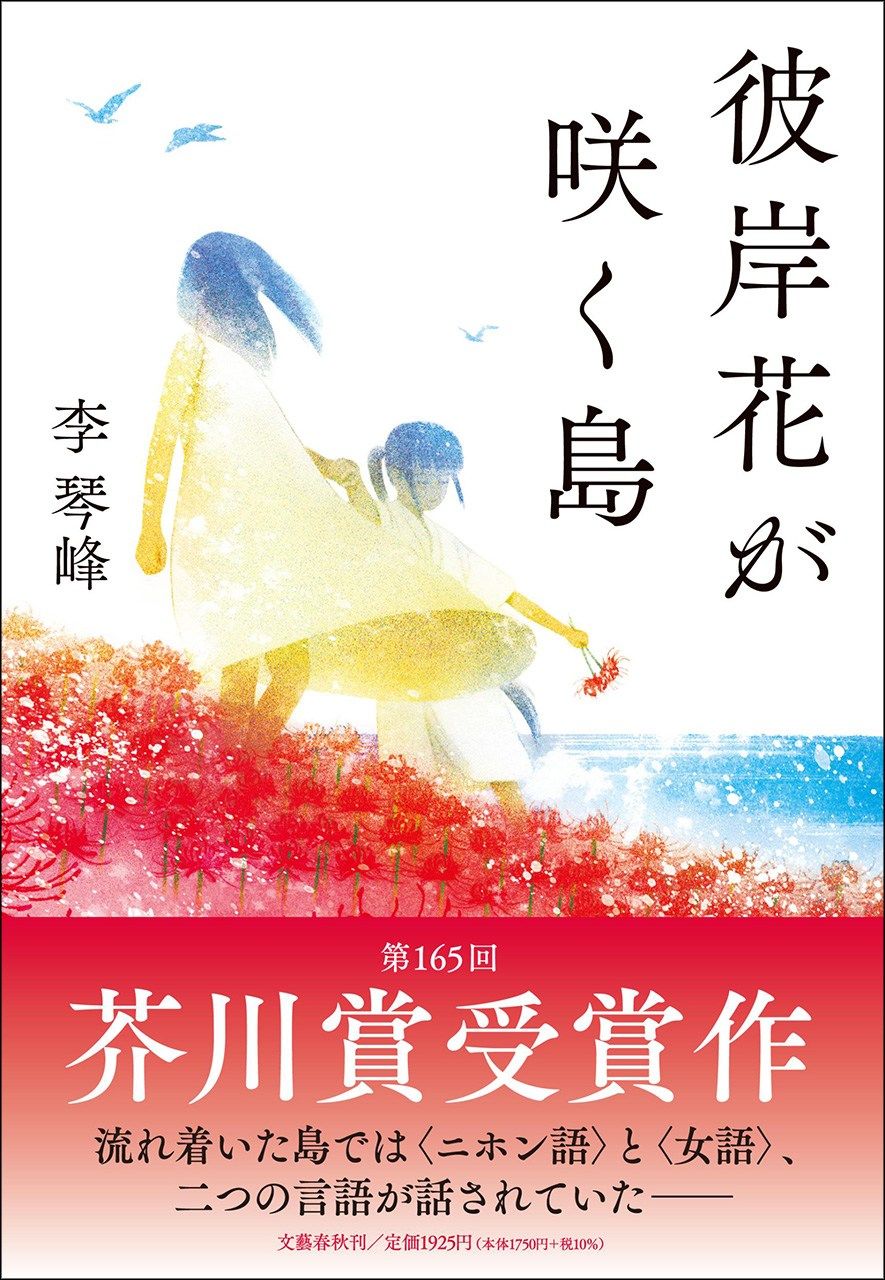 I believe the reason I survived until today is nothing other than the power of knowledge and literature. Knowledge taught me to see with an objective eye. This meant that I could develop a perspective distant in time and space from my own situation and environment, finding hints to seek out the causes of my suffering. Literature gave me a means of expression. This allowed me to assimilate subjective emotions like despair and powerlessness, anger and hatred, anguish and pain. Rather than turning my ear to society’s shallow cacophony, I became engrossed in reading, and instead of gouging out pieces of myself, I carved out words. Even so, I had evenings when I shivered from fear and sleepless nights of tears. But having endured those, I stand here now on the stage at the Akutagawa Prize ceremony.

For readers of my previous works, the prize-winning novel Higanbana ga saku shima [The Island Where the Spider Lily Blooms] might not seem very typical. In contrast, there may be some who think that I finally found my voice. The fantasy-style form of this latest book sets it apart from earlier works like Porarisu ga furisosogu yoru [Night of the Shining North Star] and Hoshi tsuki yoru [The Starry Night], but I believe it shares the same exploration of issues, meditating on language, nations, culture, and history, as well as the sense of crisis over contemporary society and politics, and the pains of being categorized.

After it was announced that I had won the prize in mid-July, I was bombarded with innumerable messages of abuse, slander, and hate speech from people who had likely never read a word that I have written. “You foreigner, don’t insult Japan!” “Get out, Japan-hater!” Those violent words, intended to hurt or silence me, ironically provided very real supporting evidence for the contemporary sense of crisis I wrote about in The Island Where the Spider Lily Blooms. Their cruel language brought my allegorical fiction one step closer to prophecy.

There were also false rumors circulating with two or three layers of incorrect information, such as that, “Li Kotomi moved to Taiwan from mainland China, so she’s not really Taiwanese. That’s why she hates Japan.” This is so ridiculously untrue I would not know where to begin countering it, but it vividly displays how humans desire a sense of security by categorizing others. “You’re such-and-such, so you should be like this.” “As that person is so-and-so, it’s no surprise that such-and-such is the case.” In this way, they interpret people, who by nature have highly complex ways of thinking, via simple attributes and a logic based on conditioned reflexes. It is precisely these violent, aggressive explanations that I have tried to resist consistently through literature, including my own writing.

In The Island Where the Spider Lily Blooms, a character says, “The ‘island’ where we were born and raised has always been a ship that might sink at any moment.” Yuval Noah Harari writes in Sapiens: A Brief History of Humankind that we are now lucky to be living in the most peaceful era in human history. However, it would be no surprise if the peace we enjoy at this moment were suddenly to vanish. As the writer of my novel, I cannot say whether it will become a prophecy or remain simply a fable. That will be decided by the actions of individuals—those living in this country, in this world.

As I am the first Taiwanese winner of the Akutagawa Prize, there has been a lot of interest and media coverage in Taiwan. I have been called the “pride of Taiwan,” as have other citizens who achieve overseas. I am pleased by this reaction in one sense, but it is also true that a part of me wants to maintain some distance.

It goes without saying that Taiwan, where I was born and raised, and Japan, where I chose to move to and live, are both very important places to me. Their languages and cultures nurtured me and undoubtedly formed the flesh and blood of my writing. I would be happy if my works or their translations could perform a role of international exchange. However, this is not the main purpose of literature, and I am nothing more than an individual born and raised in Taiwan, who chose to move to Japan. I read somewhere that writers are eternal outsiders. I have no intention to shoulder something bigger than me—for example, a state, Japan-Taiwan friendship, or the well-being of my homeland—and I would not be able to do so. I will add that I picked my traditional Chinese outfit today simply because I wished to wear it, and it is not intended to convey the least nationalist association. 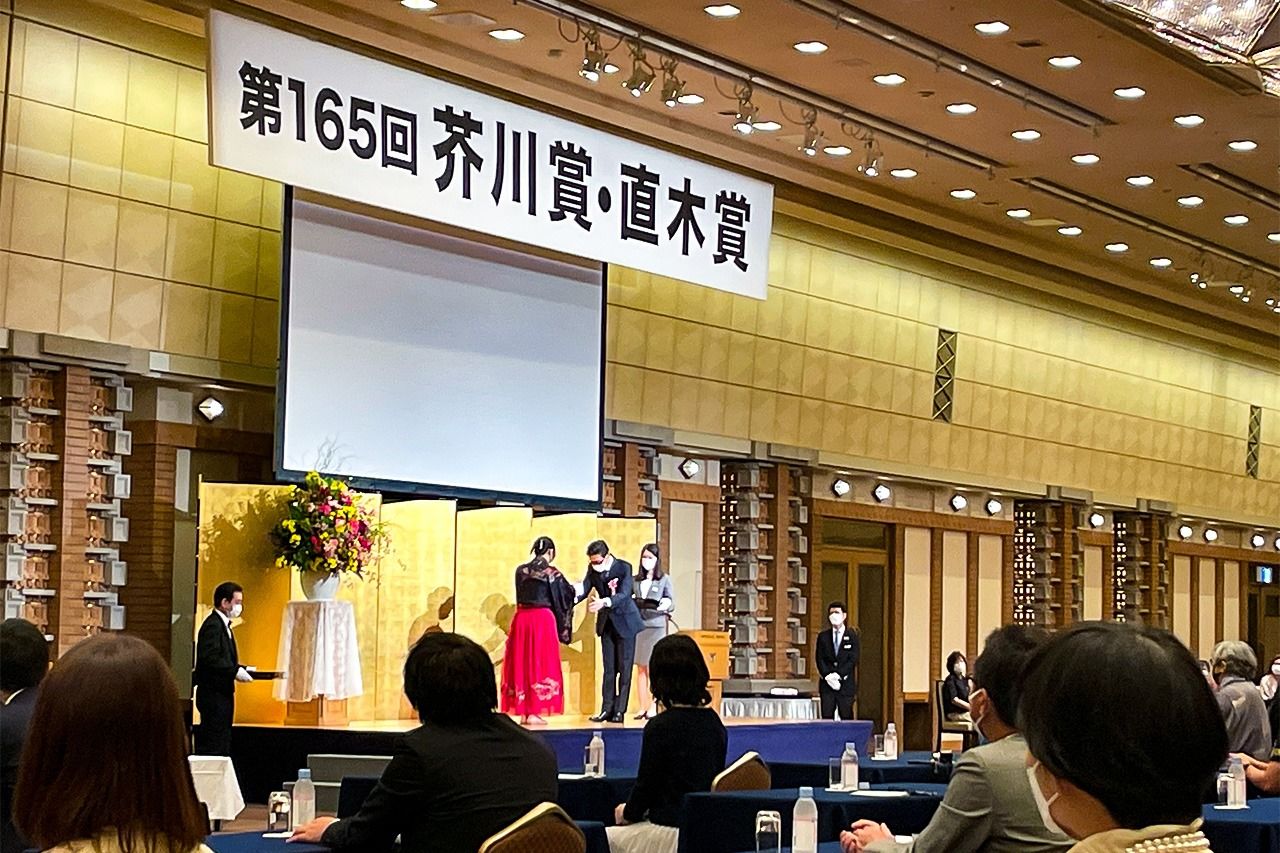 At the end of Hitorimai [Solo Dance], my debut work and the first novel I wrote in Japanese, the protagonist manages to escape death thanks to a miracle. Critics find fault with this as expediency or wish fulfillment, but I still think this kind of miracle was necessary to me for survival. I am convinced that this Akutagawa Prize award will prove to be another miracle that will help me survive.

Then, if you will indulge me, until the day literary magazines publish special features on the death of Li Kotomi, if I can leave behind me a number of works that stir up society, then I can say I have been thoroughly blessed with fortune as a writer.

I dedicate the prize to my past selves, and my works to my readers. I will continue to do so.

Thank you very much.

(Originally published in Japanese. Banner photo: Li Kotomi gives her acceptance speech at the Akutagawa Prize award ceremony in Tokyo on August 27, 2021. Courtesy of the Society for the Promotion of Japanese Literature.)