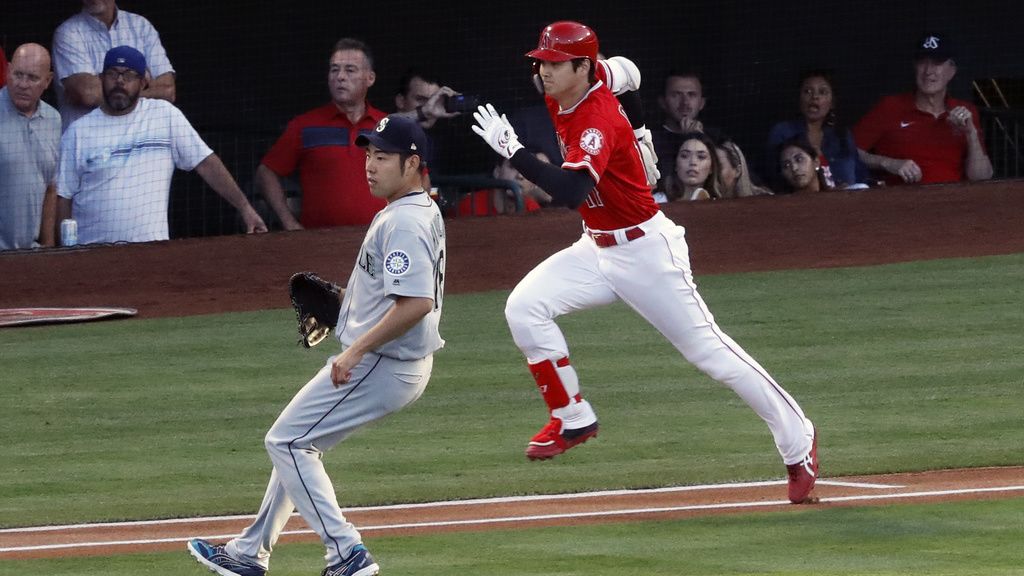 Sports Mar 8, 2022
Ohtani Shōhei refined his skills as a two-way player under the guidance of coach Sasaki Hiroshi at Hanamaki Higashi High School. The school is also the alma mater of fellow major-league pitcher Kikuchi Yūsei, whose early exploits on the mound set an example for the young Ohtani.

The first time Ohtani Shōhei heard his high school baseball coach Sasaki Hiroshi declare that he would throw a 160-kilometer-an-hour fastball someday, he had his doubts. “It was an impossible number,” the Los Angeles Angels pitcher recounts. After all, Ohtani was 15 years old and still in his first year at Hanamaki Higashi High School in Iwate Prefecture.

On top of this, Ohtani was built like a matchstick—long and skinny. Hitting puberty, he had shot to a towering 190 centimeters tall, but he had barely any meat on his gangly, 63-kilogram frame. In the gym, he struggled to hoist just the bench press bar. Still, his fastball was already pushing 140 kilometers, and his coach and others knew he would have the strength and technique to reach the blistering mark soon enough. “Everyone, including the team trainer, kept saying I’d get there eventually,” states Ohtani. “After a while, I started to believe them.”

In making his prediction, Sasaki was speaking from experience. A few years earlier he had helped bring up another high school pitching sensation, Kikuchi Yūsei. “I more or less knew what to expect,” Sasaki asserts. He says Kikuchi, who joined the Seattle Mariners of Major League Baseball in 2019, threw progressively faster as his body filled out. “He put on 20 kilograms and his fastball increased by 20 kilometers an hour. I knew it would be the same with Ohtani. Factor in his raw talent, and there was no question he’d hit 160.”

Kikuchi, who is three years older than Ohtani, gained national attention when he guided Hanamaki Higashi to a second-place finish at the 2009 spring national high school baseball invitational. Then at the prestigious summer tournament the following August, he set a new tourney record with a pitch that clocked in at 154 kilometers an hour. Ohtani joined the team the year after Kikuchi graduated, and the pair never suited up for a game together until the 2021 MLB All Star Game, which made headlines in Japan.

They were connected indirectly through Sasaki, though. In fact, Ohtani having joined Hanamaki Higashi so closely on the heels of Kikuchi feels akin to fate. In Sasaki, Ohtani was blessed with a coach who had fresh, firsthand experience bringing up a pitching prodigy and could guide him toward greatness.

Out of the gates, Sasaki was careful to avoid filling Ohtani’s head with expectations or to hold Kikuchi up as the ideal. Instead, he set out to instill in Ohtani a can-do attitude. He would present his charge with statements meant to stimulate his mind. He would assert that the shortest path to success is to follow in a person’s footsteps while also emphasizing the importance of thinking outside the box. The message was clear: learn from others, but find your own way. 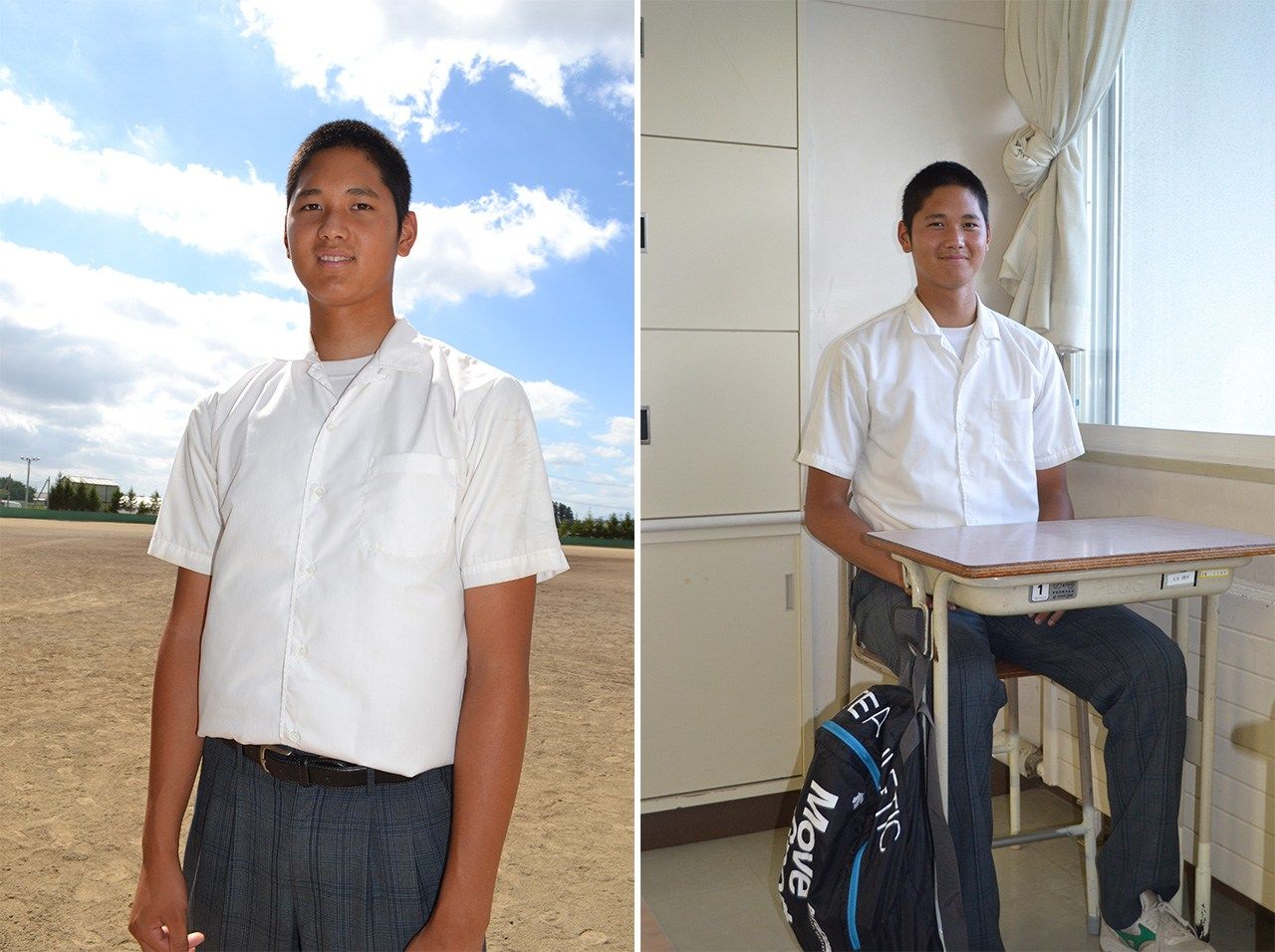 Ohtani Shōhei while a student at Hanamaki Higashi High School. (Courtesy of the author)

Sasaki is a big proponent of setting measurable objectives to strive for. “Players need to shoot for a concrete number or have a rival to compete against,” he explains. “You can’t make a plan without a clear goal in mind.” In Ohtani’s case, he says trying to make it to the 160-kilometer mark became a major motivator. “It pushed him forward as a pitcher.”

However, setting goals is only part of the equation. Taking a hint from business books and corporate training manuals, Sasaki has his players draw a grid consisting of nine squares divided into nine parts each to create what he calls a “goal sheet.” At the center he has them write their main target and then fill in the remaining squares with things they need to do to achieve that goal.

Ohtani did not hold back in his aspirations. When a first-year high school student, he wrote in the center square of his goal sheet that he wanted to be the top draft pick for eight pro teams. Around this he wrote the elements he thought vital: sharp ball movement, ball control, breaking ball, physical fitness, mental strength, character, and luck. In the final square he added Sasaki’s 160 km/h fastball prediction.

When Sasaki saw Ohtani’s goal sheet, he felt a twinge of regret. He knew from experience that most players came up just short of their targets, and a good trick for hitting the mark is to aim a little bit higher. “It occurred to me that I should have said 163 instead,” recalls Sasaki. To his surprise, though, he discovered that Ohtani had reached the same conclusion on his own. “I walked into the team weight room and found a sheet of paper that read ‘163 kilometers an hour’ posted on the wall. I couldn’t believe my eyes.” 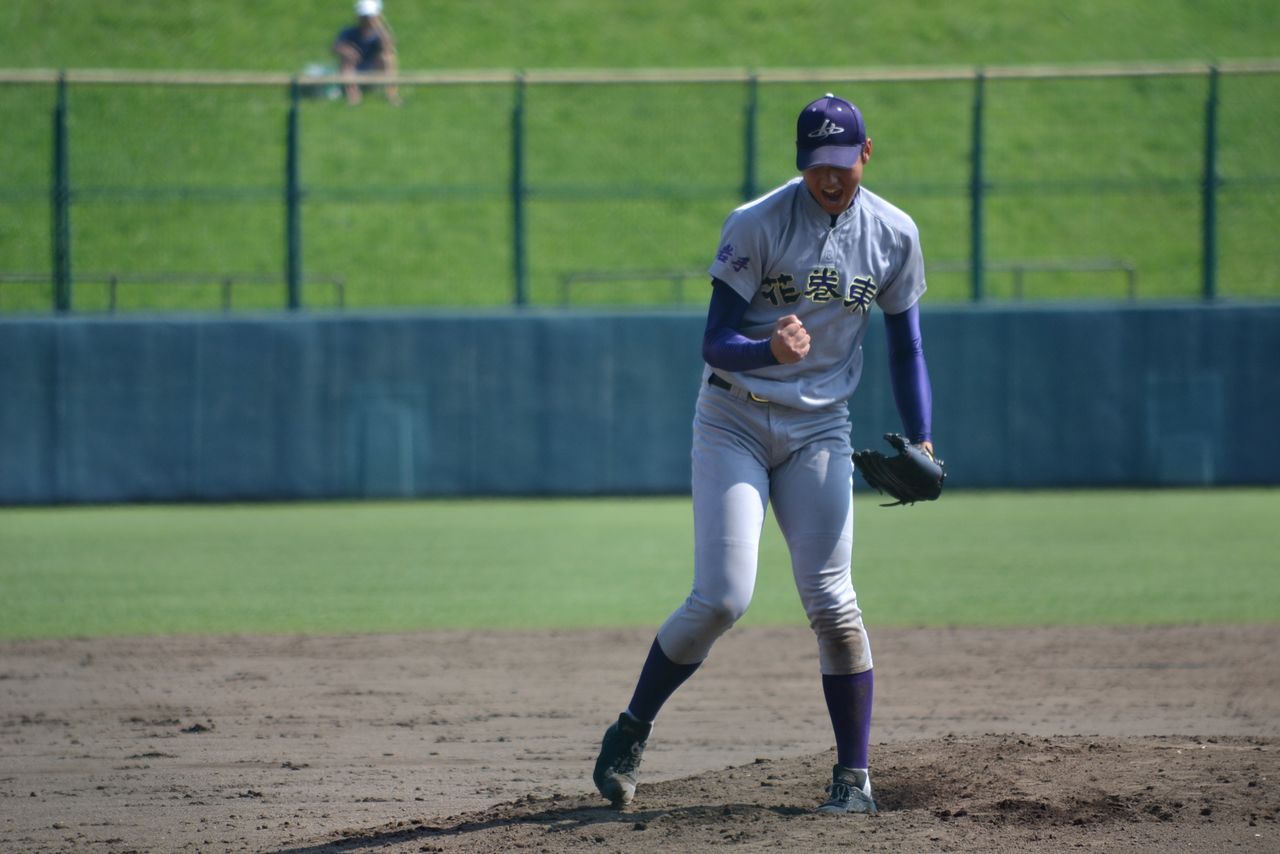 Ohtani during the semifinals of the Iwate regional high school baseball tournament in July 2012. Hanamaki Higashi prevailed 9–1, but went on to lose in the final. (Courtesy of the author) 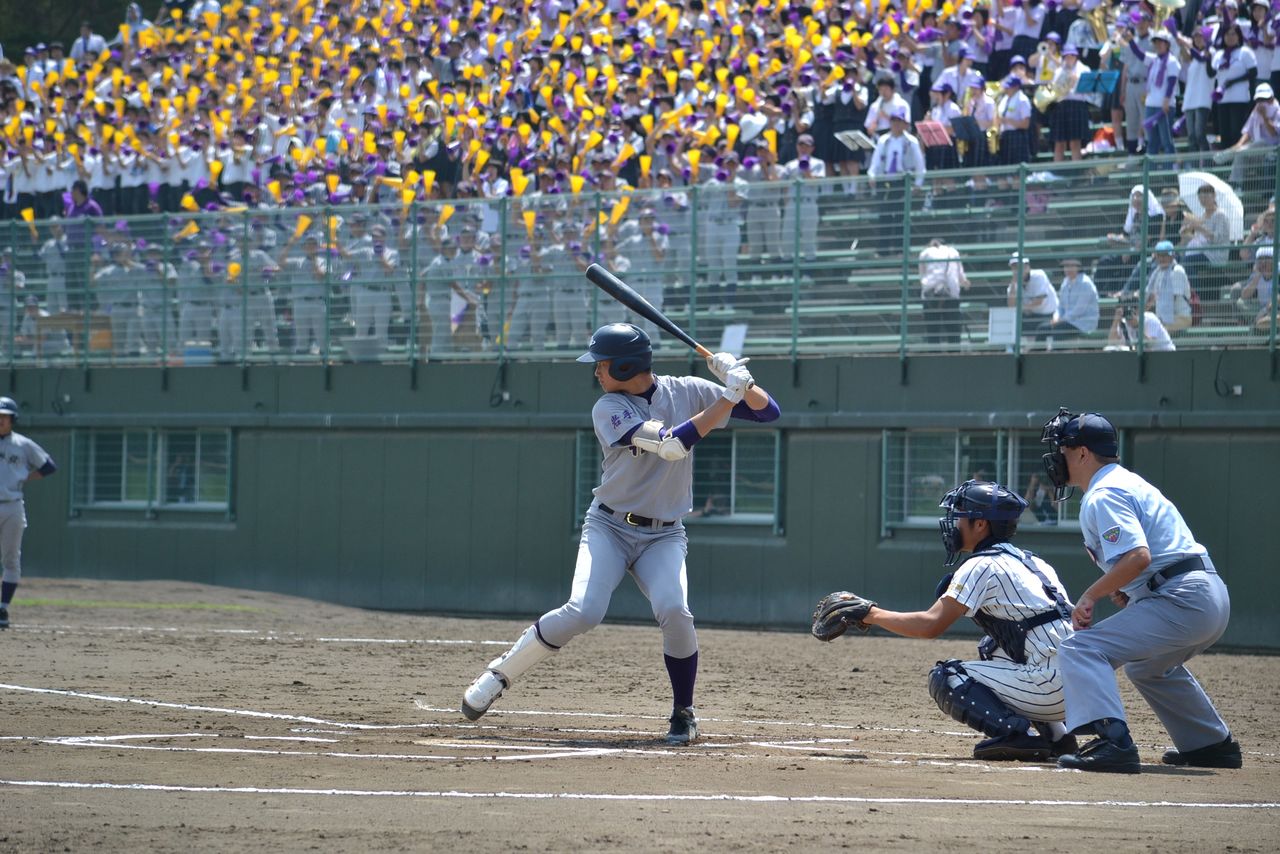 Ohtani at bat in the quarterfinal of the 2012 Iwate regional baseball tournament. (Courtesy of the author)

Ohtani had big dreams, but Sasaki knew he was still growing and made certain not to overtax the young player. To prevent injuries during training and in games, he pushed his developing star only as far as he thought his strength and stamina would allow. Sasaki kept up the approach over the some two and a half years Ohtani played for him.

During Ohtani’s first year on the team, for instance, Sasaki played him in positions other than pitcher. He admits this was a tough decision to make, but argues it was for the best. “With his build and talents, I had no doubt Ohtani would have gotten results if I’d used him on the mound,” Sasaki declares. “But I stuck to my decision not to let him pitch in games until after his first summer on the team.” 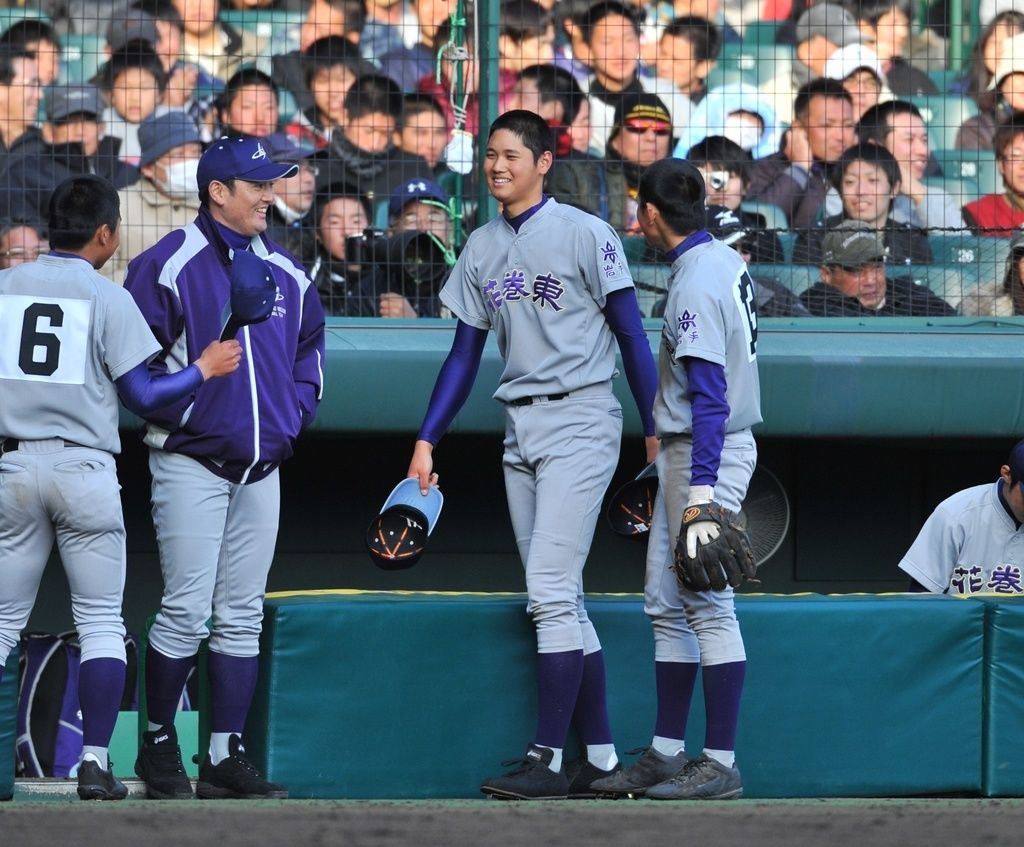 Ohtani (center) and Sasaki (second from left) during Hanamaki Higashi’s game against Osaka Tōin High School in the first round of the national spring invitational on March 3, 2021 at Kōshien Stadium. (© Iwate Nippō/Kyōdō)

Sasaki saw Ohtani’s development as a marathon, not a sprint. “I knew his goal was much further down the road,” he says. “He needed time to properly develop physically and mentally, and it was my job to help guide him along each step of this path.” Japanese high school baseball is notorious for pushing pitchers to their limits, but Sasaki was careful not to overwork Ohtani. Consequently, the only injury of note the young star suffered in his high school career was to the growth plate, the thin layer of cartilage where growth of long bones takes place, in his arm. Although this happened just ahead of the summer Iwate regional tournament, Sasaki did not baulk at taking Ohtani, then in his second year, out of the rotation until he was fully healed.

A year later, in July 2012, Ohtani made headlines when he threw a 160-kilometer-an-hour fastball in the semifinals of the Iwate regional tournament, shattering the previous amateur record. Of course, reaching the milestone was important, but the process that got him there was of more value to Ohtani. Under Sasaki he developed the mentality and maturity that sustains him today as a Major League Baseball superstar.