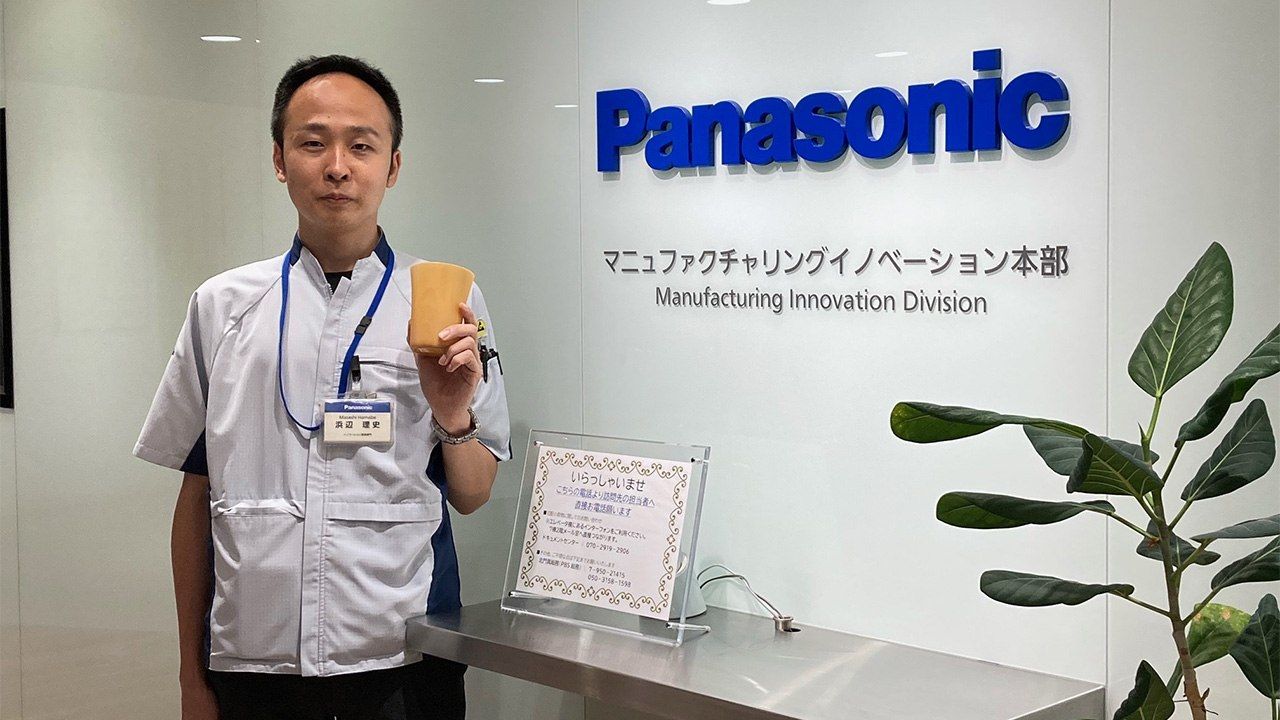 Economy Science Environment Jan 20, 2022
Made from crude oil, plastic contributes to both marine pollution and global warming. Traditional plastics might soon be replaced with plant-based materials, however, like Panasonic’s new cellulose fiber resin composite. This composite is harder than traditional plastic, despite containing over 70% cellulose. 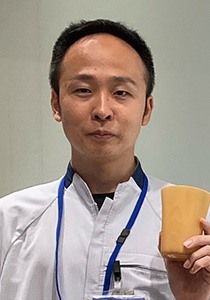 Hamabe Masashi, a senior engineer at Panasonic, is currently stationed in the company’s Material and Device Technology Department. Upon joining Panasonic in 2012 Hamabe was initially involved in the development of processes for battery anode manufacture, but in 2015 he began working on cellulose fiber resin composites. He has patented several new types of resin, including hydrophilic cellulose composite resin molded bodies and hydrophilic cellulose composite resin molded bodies.

INTERVIEWER  In 2021, Panasonic invented a cellulose fiber composite that combined fiber manufactured from the cellulose contained in plant cells with plastic resin, releasing it under the brand name Kinari. What’s the significance of Kinari for the environment?

HAMABE Masashi  Traditional plastic resins are almost 100% oil, and when they are eventually incinerated, they release carbon dioxide. If you focus on the beginning and end of their lives, it’s clear that by using these plastics, we’re simply turning oil into carbon dioxide. Plant-derived resins, on the other hand, do create carbon dioxide when incinerated, but because that carbon content was originally captured by those plants during photosynthesis, the emissions are balanced by the carbon dioxide absorbed while the plants grew. In other words, these plastics make it possible to create a circular economy that does not rely on oil. Also, because cellulose fibers are biodegradable, switching to plant-derived resins helps us reduce the discharge of nonbiodegradable plastics into the ocean, thereby combatting marine pollution.

INTERVIEWER  Do plant-derived resins have the same properties as traditional plastics?

HAMABE  Cellulose fiber resin composites contain reinforcing fibers that form the “backbone” of a plant’s structure, making the plastic stronger. In particular, these composites outperform traditional resins in terms of rigidity, a measure of a material’s ability to withstand force. This means that a cellulose fiber resin composite of a given rigidity will be lighter that its traditional counterpart.

Cellulose fiber resin composites also enable us to simulate a wood finish. At the same time, because the process generally only requires the application of a moderate amount of heat, it’s possible to stop the resin from browning, maintaining a white color.

INTERVIEWER  Your team began working seriously on the cellulose fiber resin composite in 2015, and the project ramped up after the Ministry of the Environment commissioned a technology to improve the carbon-emission profile of the manufacturing process. How did you come to develop the cellulose fiber?

HAMABE  In around 2014, other Japanese manufacturers began releasing cellulose nanofibers. These fibers are manufactured by using water or additives to untangle cellulose-derived pulp fiber and convert it into very fine fibers, mere nanometers in diameter. These fibers are then dried and mixed with resin to create a composite. We were also interested in cellulose nanofiber. We were given the mission of developing a process to manufacture it, and our belief that an innovative approach might result in an even better product gave us the idea of creating a fully dry process.

HAMABE  The process is unique in that no part of it requires water. The pulp feedstock is ground dry. The ground pulp is then straightened by immersing it in a resin solvent, which has had plastic resin and additives dissolved in it, creating cellulose fiber. In this way, we can create cellulose fiber resin composite using only pulp fiber and plastic resin. The manufacturing process requires less than a quarter of the energy of traditional processes.

INTERVIEWER  Where did the idea for a completely dry process come from?

HAMABE  It was the result of a discussion among the engineers. Previously, we had developed materials for batteries, which involved applying liquid compounds to substrates, and we attempted to create a water-free process. By eliminating liquids, we avoided overconcentrating the active ingredients, thereby maintaining performance. While our focus has now shifted from batteries to cellulose fiber, I believe the dry process we developed draws on the body of research we accumulated while developing batteries.

INTERVIEWER  Were you able to leverage Panasonic’s fortes?

HAMABE  I believe so. Expertise we gained in development of battery materials has been applied in other areas. For example, the process of developing a technology to grind battery materials gave us an understanding of the fundamentals of grinding, which we were able to apply when considering how to grind fiber-embedded pulp.

HAMABE  In 2019, we succeeded in creating a plastic that was 55% fiber, and by 2021 that percentage had risen to 70%. The ability to use high ratios of fiber is another advantage of the dry process. This process allows us to maintain the thickness of the core part of the fiber, while straightening and thinning the ends. The core sections of the fibers are not over-straightened, and this improves the take-up of dissolved resin.

From Vacuum Cleaners to Cups

INTERVIEWER  In 2019, Panasonic released several products that incorporated the resin, including some jointly developed with other corporations. How did you come to use cellulose fiber resin composite in its stick vacuums?

HAMABE  There was demand from both our own engineers and our customers for lighter stick vacuum cleaners. In addition to cellulose fiber, we also considered using glass fiber or carbon fiber. Because these vacuum cleaners are stored upright, it was important that they would not crack or break if they fell on their sides. Our strength tests found that resin containing cellulose fiber was at least as strong as the other alternatives, while being around 10% lighter. This led us to decide on cellulose fiber resin composite for the vacuum parts.

HAMABE  Panasonic already had a relationship with Asahi, with both corporations being official sponsors of the Tokyo Olympic and Paralympic Games. This led us to show Asahi prototype containers manufactured using cellulose fiber resin composite. Asahi, for its part, was concerned about the way drinkers tended to immediately discard the clear plastic cups they received at events. This led the two corporations to jointly develop the Morino tumbler.

At an event to test the prototype tumbler in 2019, patrons were able to buy beer in a tumbler for ¥600, with their second beer costing ¥500 on the condition that they reused the tumbler. Patrons were also able to keep the tumblers as souvenirs, thereby reducing waste.

The new material also had the unexpected benefit of improving the head on the beer. Fine grooves at just the right intervals on the surface of the material create fine bubbles, enhancing foam quality. 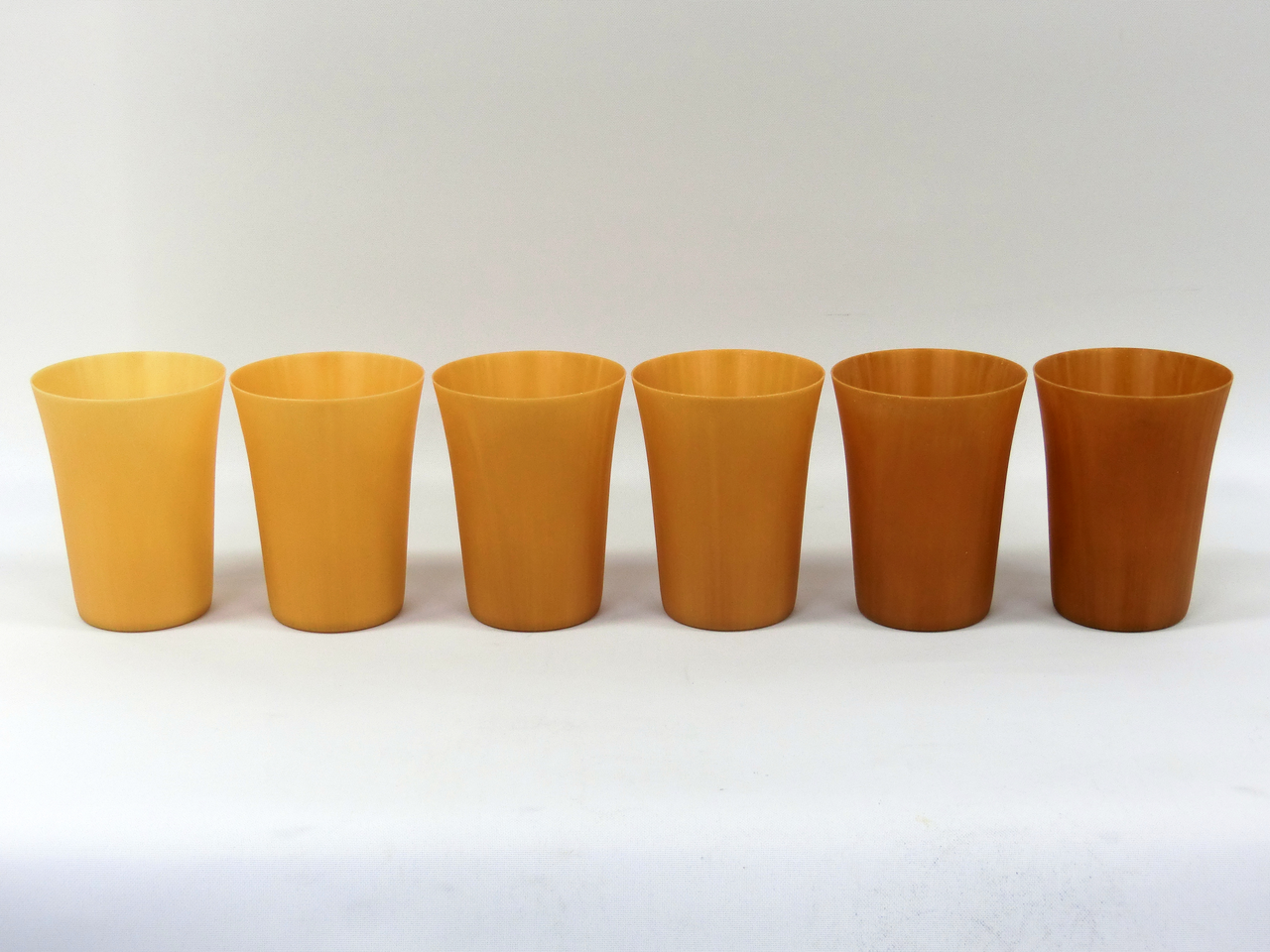 INTERVIEWER  What resins is cellulose fiber most suited to?

HAMABE  In the process of working with this material I came to feel that it is more suited to some resins than others. Polyethylene terephthalate, or PET, resin has a high melting point, causing the fibers to become scorched. Cellulose fiber is therefore more suited to resins with lower melting points like polypropylene. To that end, we’re evaluating various possibilities, with a view to using cellulose fiber in household appliances, building materials, and the like.

INTERVIEWER  Now that your composite has been used in actual products, what challenges do you face and what ambitions do you have in regard to the wide-scale uptake of the material?

HAMABE  We want to use a greater variety of plant materials. I believe one possibility would be buying discarded cotton fabric and other fabric from clothing manufacturers and turning it into clothes hangers for use in stores.

We now want to have the clients that use the material work with our engineering divisions to solve challenges one by one. At the moment, our biggest challenge is reducing costs. Cellulose fiber resin composite is currently several times to several dozen times more expensive than generic resin. By establishing mass production and distribution capacity, we hope to dramatically reduce production costs so that we will be able to provide reasonably priced materials both for use by external clients and in Panasonic products.

INTERVIEWER  What is your end goal?

HAMABE  Ultimately, I want to see the creation of a circular economy that utilizes plant material and is not dependent on fossil fuels. This resin might only be one small step toward that goal, but to that end, we’re planning to slowly but surely transition to new materials, one product a time.