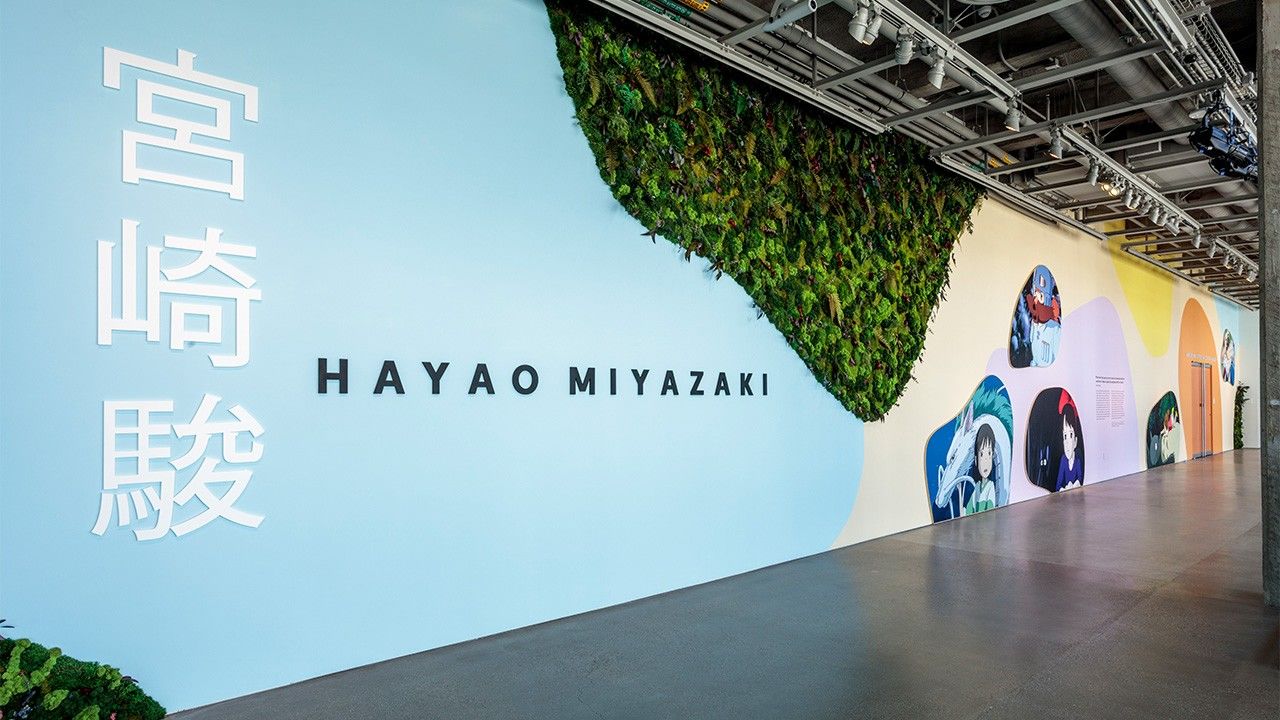 Culture Art Nov 12, 2021
A new museum in Los Angeles showcasing the history of cinema kicks off with a special exhibition on Miyazaki Hayao and Studio Ghibli.

A New Site for Cinema Buffs

Admirers of Miyazaki Hayao now have a chance to see a considerable collection of original items related to his work in Los Angeles, in the first major show of authentic Studio Ghibli items outside of Japan. The Miyazaki exhibit opened as the first temporary exhibition in the Academy Museum of Motion Pictures in Los Angeles, which opened to the public on September 30. Situated on the fourth floor of the museum, on the corner of Wilshire Boulevard and Fairfax Avenue and right next to the Los Angeles County Museum of Art, the exhibit has already become a popular draw for visitors, with lines of people waiting to get in the first few days it was open.

The Academy of Motion Pictures has been giving out Oscar statuettes since 1929 and is well known around the world for its lavish award ceremonies, but aside from offices in Beverly Hills, New York and London, the organization had no physical presence like a museum until now. Most tourists associate the Academy Awards with the Kodak Theater in Hollywood, which has hosted most Oscar shows in recent years. However, the establishment of this museum gives film buffs yet another place to view memorabilia from cinema’s past. 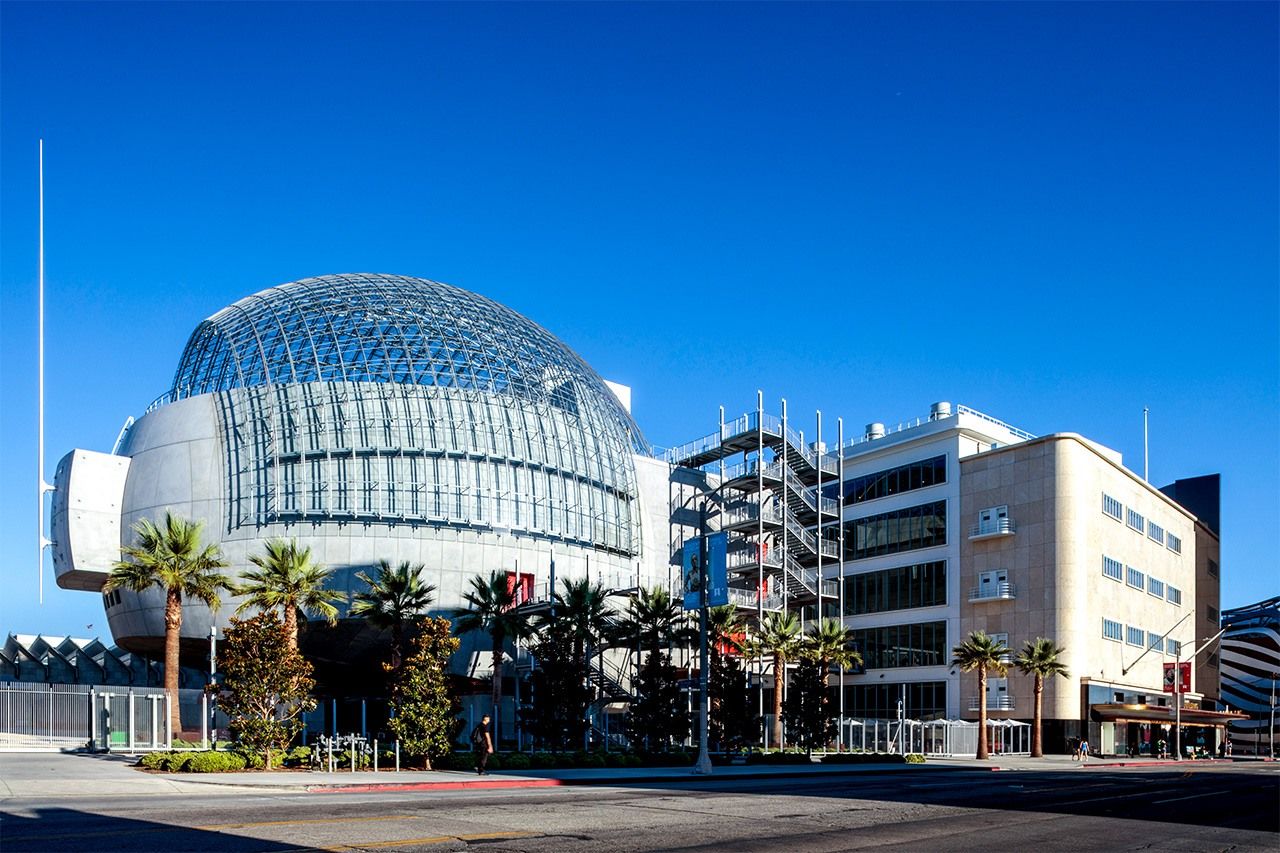 The Saban Building at right is joined by a futuristic dome extension. (Photo by Joshua White/© Academy Museum Foundation)

Visitors to the museum itself will notice that the original building (now called the Saban Building after primary donors Cheryl and Haim Saban) has been around for some time, as it used to be a department store that opened in 1939 and remained in business until 1992. The LA County Museum of Art used the area as exhibition space until it signed a 55-year lease agreement with the Museum for use of the structure and nearby land to extend it with a striking dome-shaped hall.

Miyazaki Kicks Off the Show

The Miyazaki Hayao exhibition was created in collaboration with Studio Ghibli, which actively worked with the museum and had active input in how everything was arranged. Several videoconferences were also part of the final arrangements before the pre-opening press event on September 23 and the general public opening a week later. So far, the reaction has been quite positive, with numerous visitors even making a point of specifically visiting that exhibit before anything else in the museum.

“Miyazaki has a singular ability to capture how we perceive life, with all its ambiguities and complexities,” said Academy Museum Exhibitions Curator Jessica Niebel. “It has been a privilege to collaborate with Studio Ghibli in creating an exhibition that will appeal to the most avid Miyazaki fans and those not yet familiar with his work.” 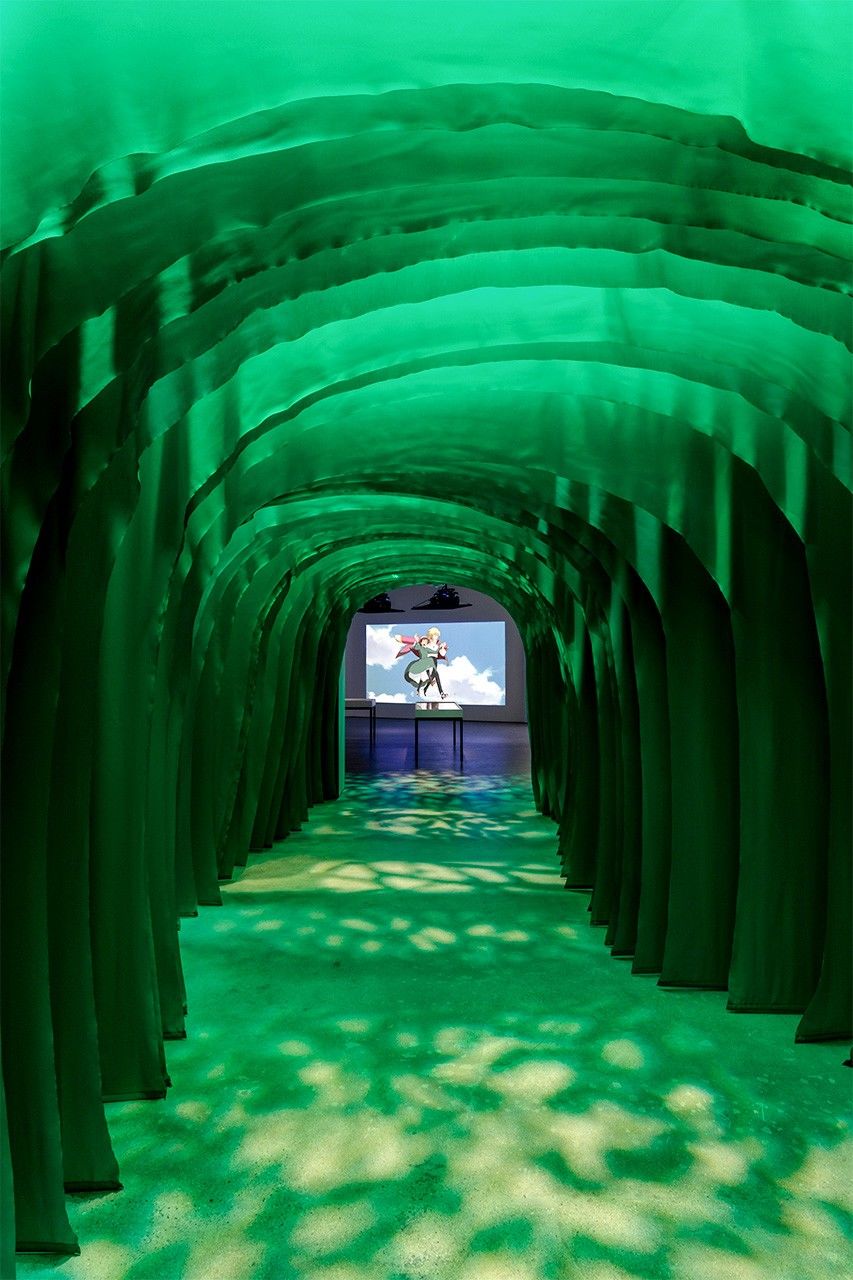 Also commenting on the opening of the exhibition was producer and Studio Ghibli cofounder Suzuki Toshio. The producer said, “It is an immense honor that Miyazaki Hayao is the inaugural temporary exhibition at the Academy Museum of Motion Pictures. Miyazaki’s genius is his power of remembering what he sees. He opens the drawers in his head to pull out these visual memories to create characters, landscapes, and structures that are bursting with originality. It is our hope that visitors will be able to experience the entire scope of his creative process through this exhibition. I am deeply grateful to all those who have been instrumental in presenting it.”

Entrance to the exhibit is included with the museum’s general admission. Visitors first go through a Tree Tunnel like that in My Neighbor Totoro to enter the Creating Characters gallery, where several projectors show various scenes from protagonists in some of the most famous Miyazaki films and explain the process of how those characters came to be. Complementing this and in other sections as well are almost 300 authentic pieces, including storyboards, illustrations, reproductions, key animations, and even some miniatures used to create large set pieces in the Ghibli Museum in Mitaka, Tokyo. One of these miniatures is a reproduction of the Slag Ravine Mine used in Castle in the Sky. 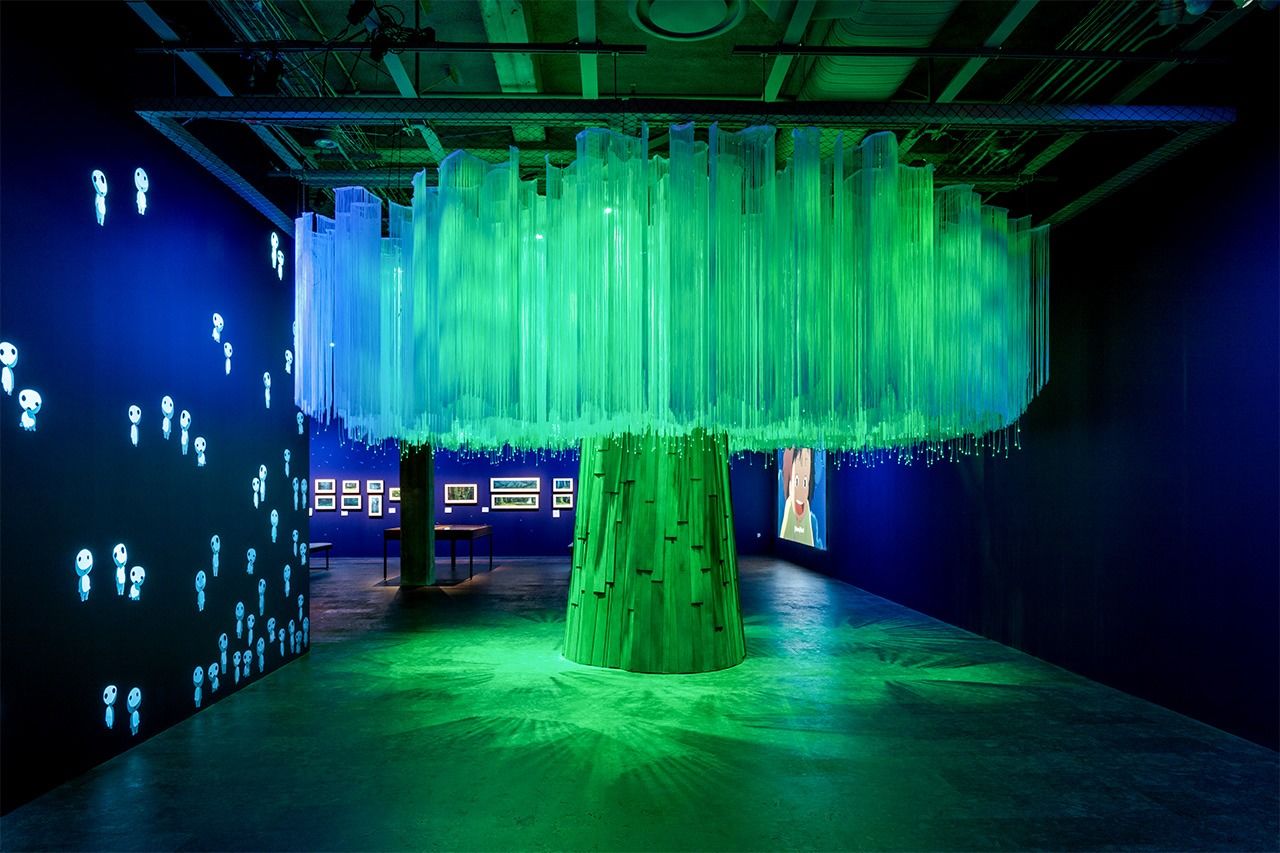 Included in all of the authentic items is a wall of original film release posters from Japan, going from the 1979 Lupin III: The Castle of Caligostro to Earwig and the Witch, which just hit cinemas in Japan this August after its debut showing on Japanese TV on December 30, 2020. There is footage of interviews with both Miyazaki himself and late cofounder Takahata Isao, who talk about the beginning of their career and how they founded Studio Ghibli.

An interactive part of the exhibit has visitors lie down in the Sky View installation, where they can feel a breeze and relax while being surrounded by images from many of the films that include themes of flight, such as Kiki’s Delivery Service, Porco Rosso, and The Wind Rises. Large portions of the exhibit’s walls are dedicated to space for projections of the films, which are alternately displayed in Japanese with English subtitles or with English dubbing.

A separate Transformations gallery shows both the creative and destructive power of change seen in films such as Nausicaa Valley of the Wind and Howl’s Moving Castle. This gallery eventually leads to a separate section of the exhibit called the Magical Forest. A large tree installation welcomes visitors to scenes of a mythical forest and items from the production of Princess Mononoke, which was the first large-scale introduction of Miyazaki and Studio Ghibli’s work to general audiences in North America.

Finally, visitors are guided back to the regular museum through a pathway reminiscent of that in the film Spirited Away. Items related to the exhibit feature heavily in promotion for the museum itself and also are present in the gift shop.

One interesting note is that one of several theaters in the Academy Museum, the yet-to-open 288-seat Ted Mann Theater, will be showing a few films related to museum exhibits. One of the first films to be shown will be My Neighbor Totoro.

There is a strict prohibition of any videos or photography of the exhibit itself on the fourth floor, but the Academy Museum provided some images of the exhibit, which are shown with this article. 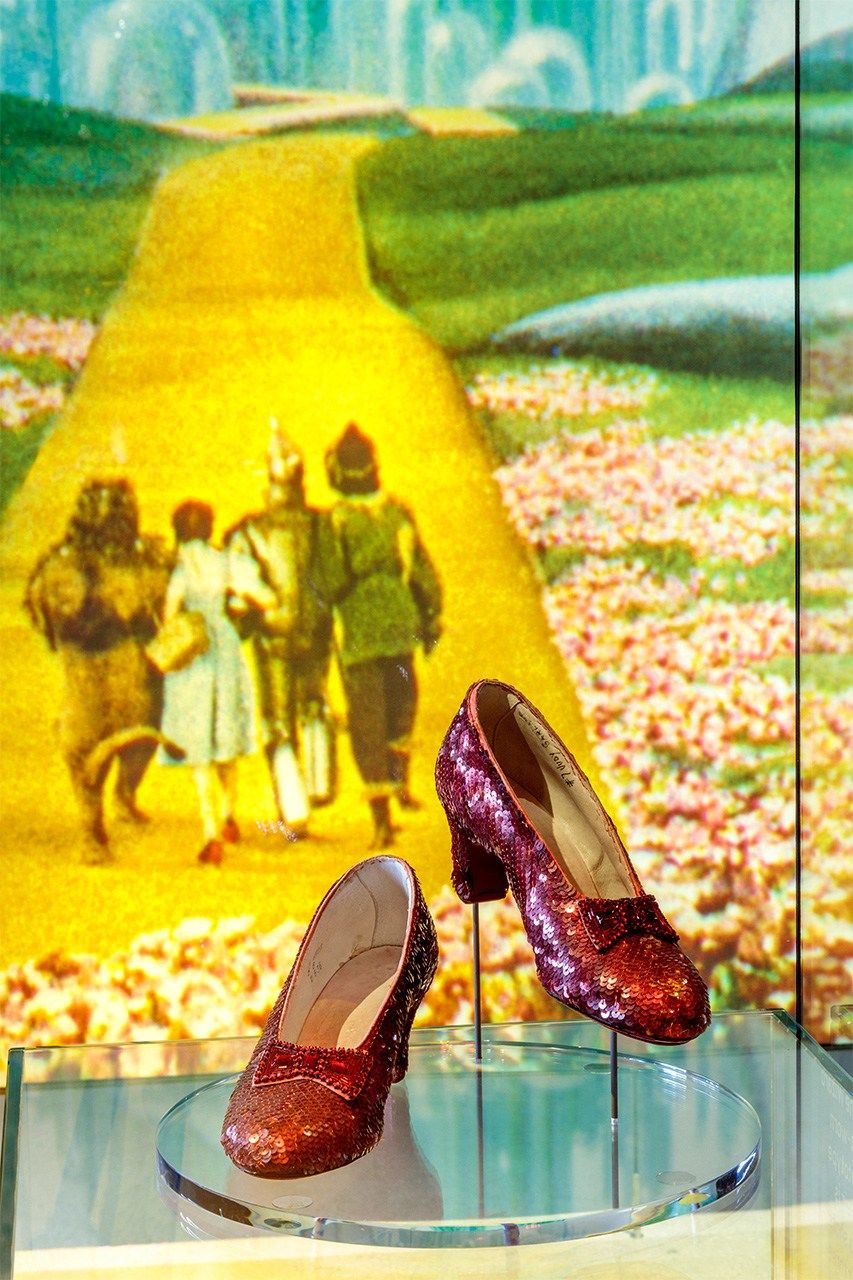 The museum’s permanent space displays treasures from the history of cinema, like the ruby slippers Judy Garland wore in the 1939 Wizard of Oz. (Photo by Joshua White/© Academy Museum Foundation)

Even with the current COVID-19 protocols in place for visitors to any large indoor venues, the museum is getting attention in hopes of welcoming many more visitors in the future. Personally, I found my time in the museum to be one of the best possible ways to see authentic items from Miyazaki Hayao and Studio Ghibli without going to Japan. Having the exhibit among such prominent items of cinema history, such as original costumes from Star Wars and The Wizard of Oz and the original “Rosebud” sled from Citizen Kane) make it an even more worthwhile visit, although the Miyazaki exhibit appeared to be quite a draw on its own for many of the tourists I saw there.