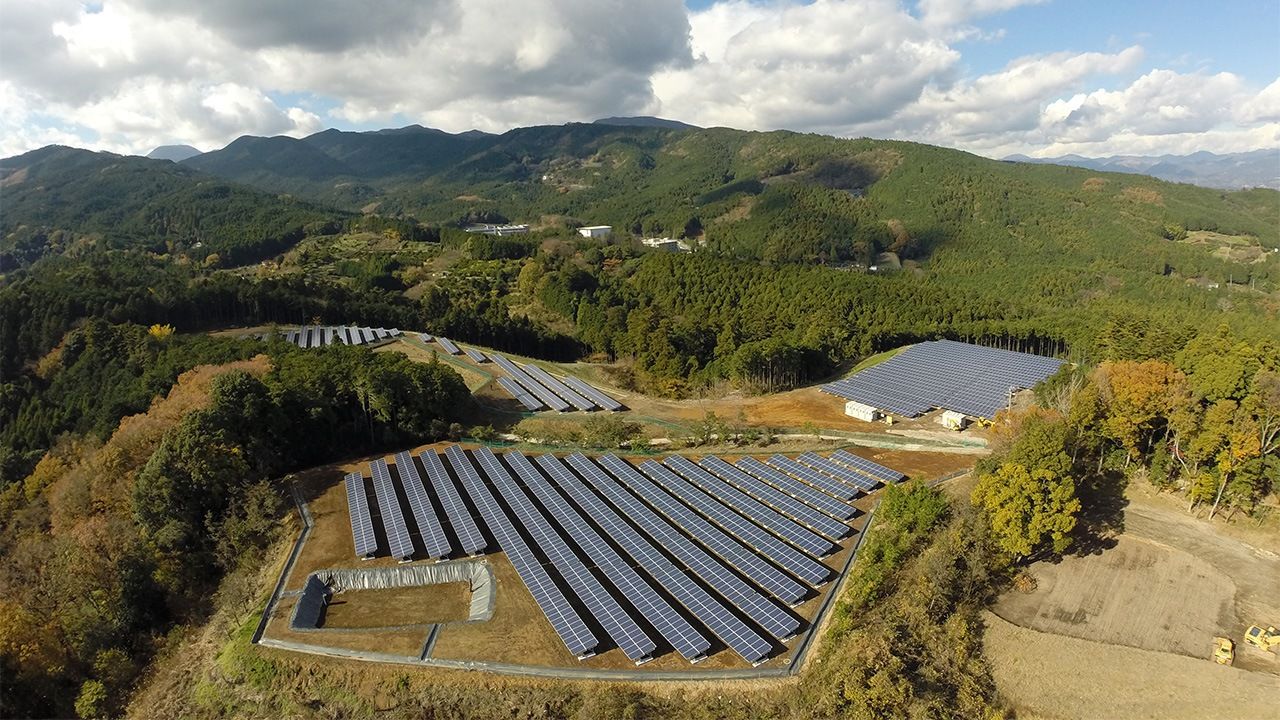 Getting to Zero: Businesses in Odawara Embrace Renewable Energy

Environment Society Economy Nov 12, 2021
A growing number of companies in Odawara, Kanagawa Prefecture, see shifting to renewable energy as good business. They are joining forces to transition away from power from large utilities and to meet energy needs locally with sustainable sources like solar, bringing benefits to the environment as well as the local economy.

Suzuhiro, a maker of traditional fishcakes in Kanagawa Prefecture, has been hawking its famed kamaboko along the historic Tōkaidō highway for nearly 150 years. The manufacturer has weathered a number of storms over this time, but none that compared to the aftermath of the 2011 Great East Japan Earthquake.

Located in the old castle town of Odawara, the firm was spared the worst of the shaking, only to be slammed by the rolling blackouts authorities instigated following the meltdowns at the Fukushima Daiichi Nuclear Power Station. With the normally steady flow of power to essential equipment like refrigerators, mixers, and steaming vats cut off for long stretches, production lines sat idle, dealing an unexpected blow to the company’s sense of security and its bottom line.

“Dealing with the unpredictable blackouts was a massive challenge,” recounts Suzuhiro’s vice president Suzuki Teisuke. “The electricity would shut off in the morning one day and then the afternoon the next. It wreaked havoc with our production schedule.” Suzuki says he had assumed Japan, as a leading industrial nation, was safe from such disruption, but the experience opened his eyes to just how precarious the country’s energy situation really was. “It was little better than a house of cards.” 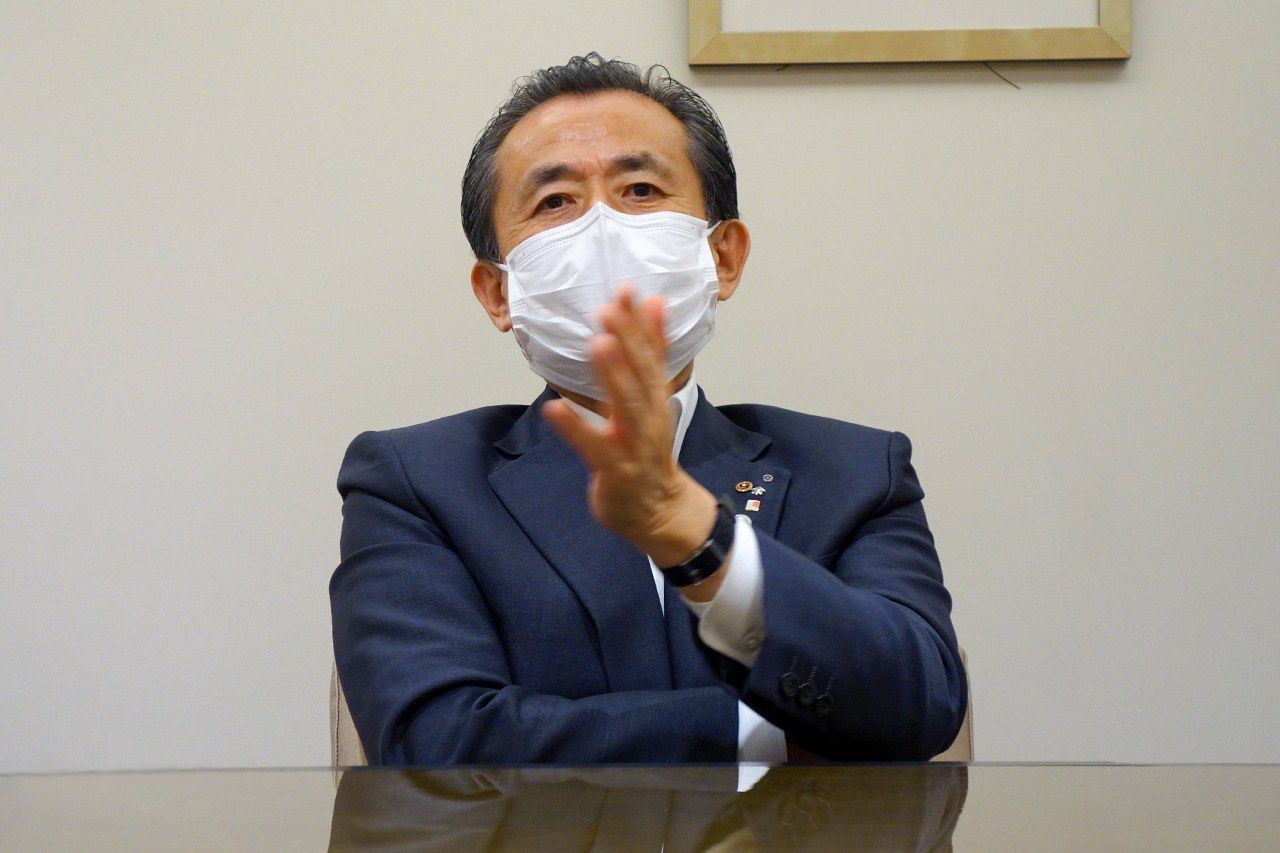 The impact of the Fukushima Daiichi disaster went far beyond just power outages, though. Suzuki explains that Suzuhiro relies on Odawara’s rich natural surroundings to make its prized kamaboko, including fish from adjacent Sagami Bay and ground water that percolates down from the Tanzawa mountains. But the safety of these long-depended on resources were suddenly thrown into question by radioactive cesium spewed out by the crippled plant some 300 kilometers away. Tea growers in the nearby town of Yamakita, for instance, were forced to halt shipments of the area’s famed Ashigara-cha after traces were detected, raising concerns of broader contamination. “We couldn’t sit back and ignore the looming threat to our business,” stresses Suzuki.

The experience made him and others at Suzuhiro start to rethink their views on energy. One obvious issue was the inequality of Japan’s approach to power generation. Fukushima Daiichi supplied electricity to the Tokyo metropolitan area, but it was the communities around the plant that suffered the brunt of the accident. “Electricity isn’t generated at the light switch,” declares Suzuki. “The disaster made us question the wisdom of shamelessly consuming power without acknowledging the negative consequences of our actions. It forced us to consider more broadly where our energy comes from.”

Recognizing the risks of relying solely on giant utilities, Suzuki wanted to boost the company’s resilience and started exploring ways of generating power closer to home. The idea of establishing a large-scale thermal power station was quickly abandoned as being too costly and technically challenging. There were also environmental concerns to consider, which made renewable energy sources the best options.

Suzuki set to work immediately, organizing a group to study the issue and hosting a public symposium on the topic. Others in the business community shared his concerns about Odawara’s power conundrum, and with financial investments from 37 local firms, along with ¥100 million gathered from private citizens in three months, the solar-based power company Hōtoku Energy was established in 2012.

Hōtoku’s business model is straightforward: The company sells the power it produces at its photovoltaic installations in and around Odawara to retailer Shōnan Power, a utility similarly established with local investment, which then provides the electricity to service subscribers in the community. Since 2020, Shōnan Power has taken advantage of subsidies from Kanagawa Prefecture’s Zero Yen Solar program to launch a new program that covers the cost of installing solar panels on private homes, with residents paying only for the electricity produced. So far supply has kept pace with local demand, and even outstripped it at times, demonstrating room for further growth. 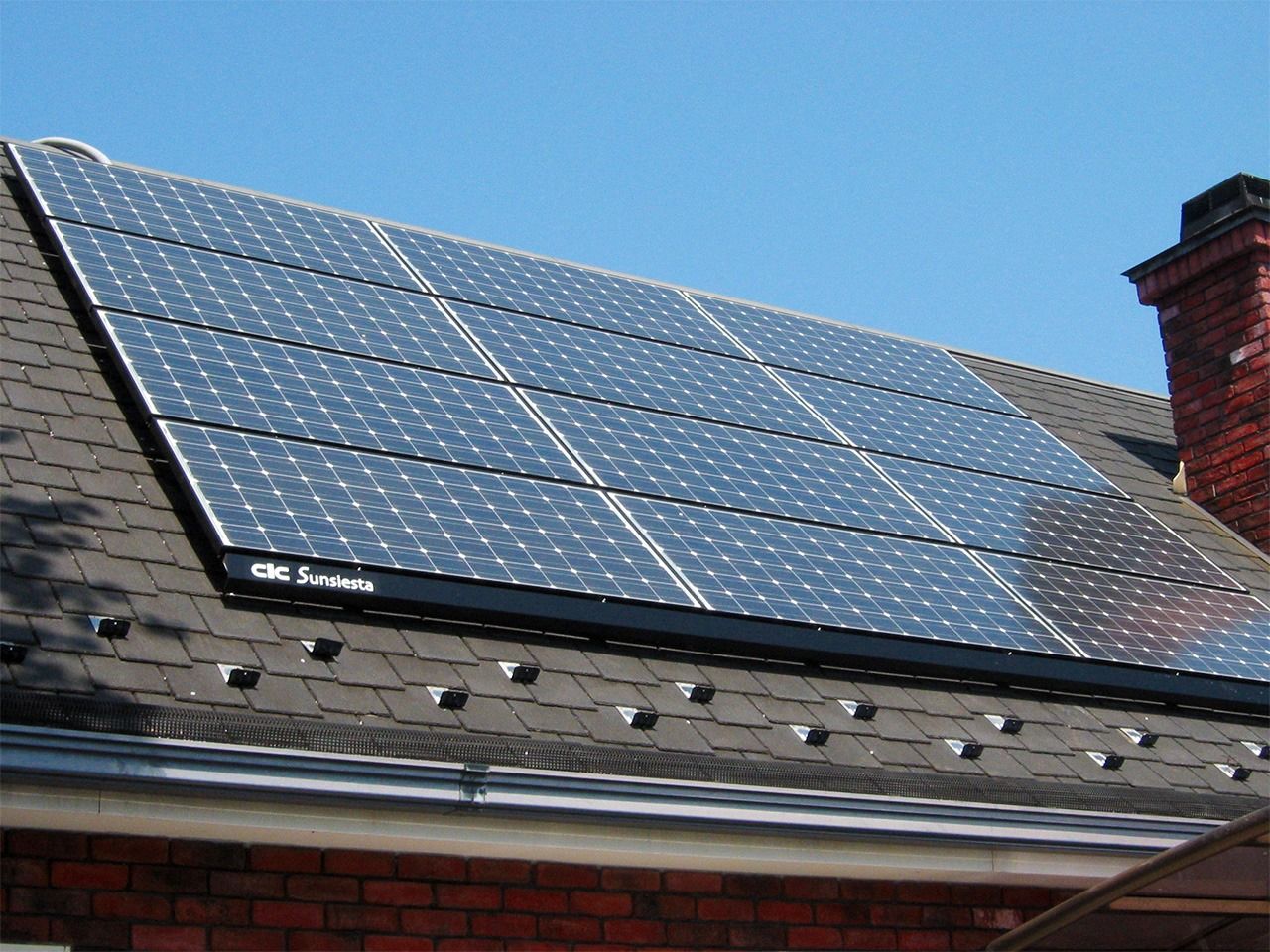 In 2019, a second disaster, a typhoon, brought home to residents of Odawara the stark reality of climate change. In October, Typhoon Hagibis battered the coast and dumped more than 900 millimeters of rain on neighboring Hakone in a single day. Landslides triggered by the deluge destroyed large stretches of the Hakone Tozan Railway, bringing tourism to the area to a near halt for a time. In Suzuki’s mind, the storm was the price of complacency on climate issues. 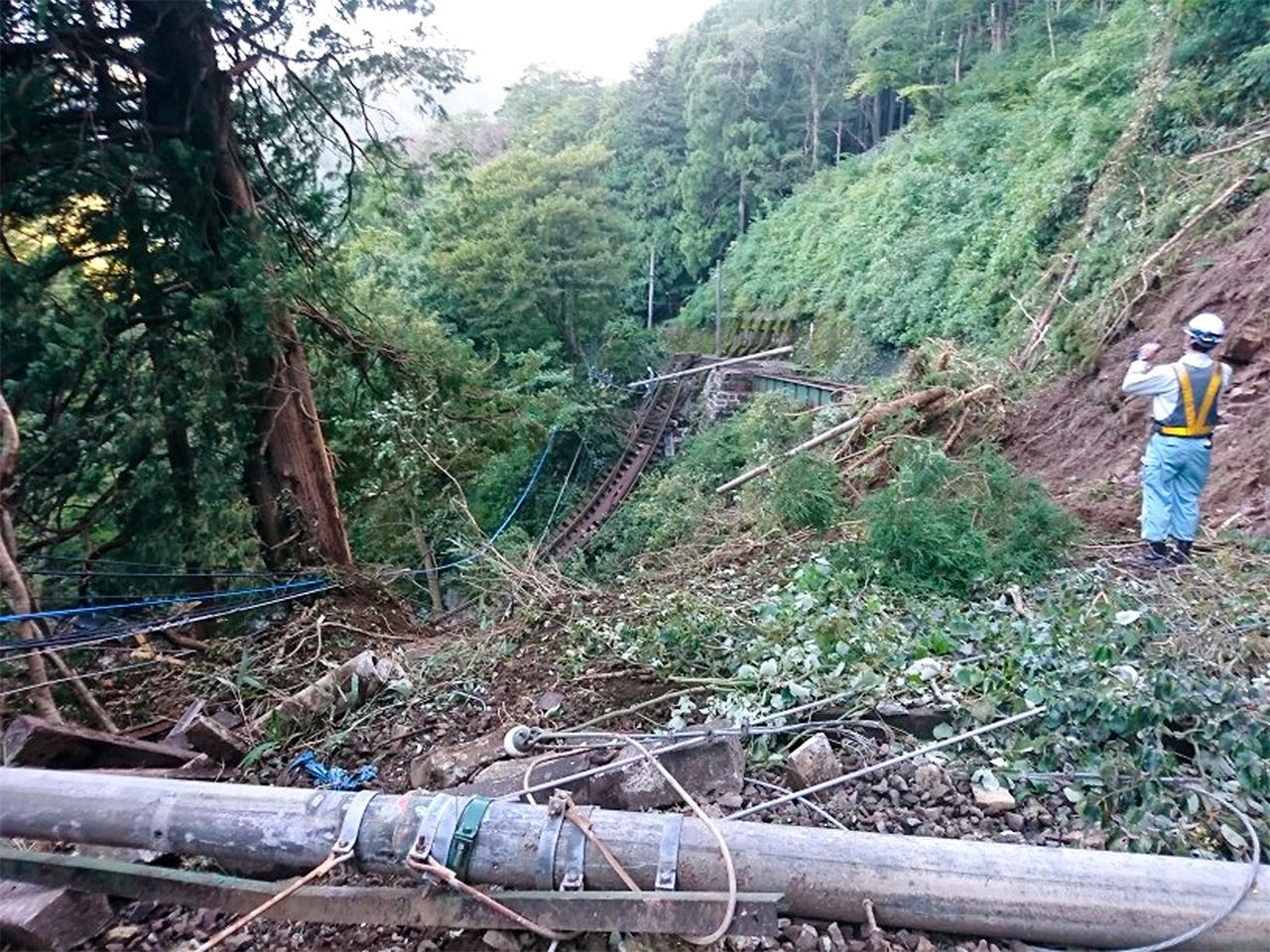 Along with the obvious environmental benefits, the policy of keeping energy production and consumption localized with renewables makes good economic sense. Odawara’s 190,000 residents collectively spend around ¥30 billion on power each year. “If we can meet even 10 percent of demand locally,” explains Suzuki, “that will pump some 3 billion yen back into the community rather than it being paid to an outside utility.”

Shōnan Power has been pioneering a system to recirculate that revenue within the local economy. In September 2021, the utility signed an agreement with the Odawara municipal government and firms like Zeroboard, a cloud service company offering tools for businesses and individual to track and offset their carbon emissions. Under the scheme, customers enrolled in the Zero Yen Solar program earn credits for the amount of carbon-free electricity that they consume, with a portion of the credits being converted to discount coupons that can be used at participating businesses in the community. 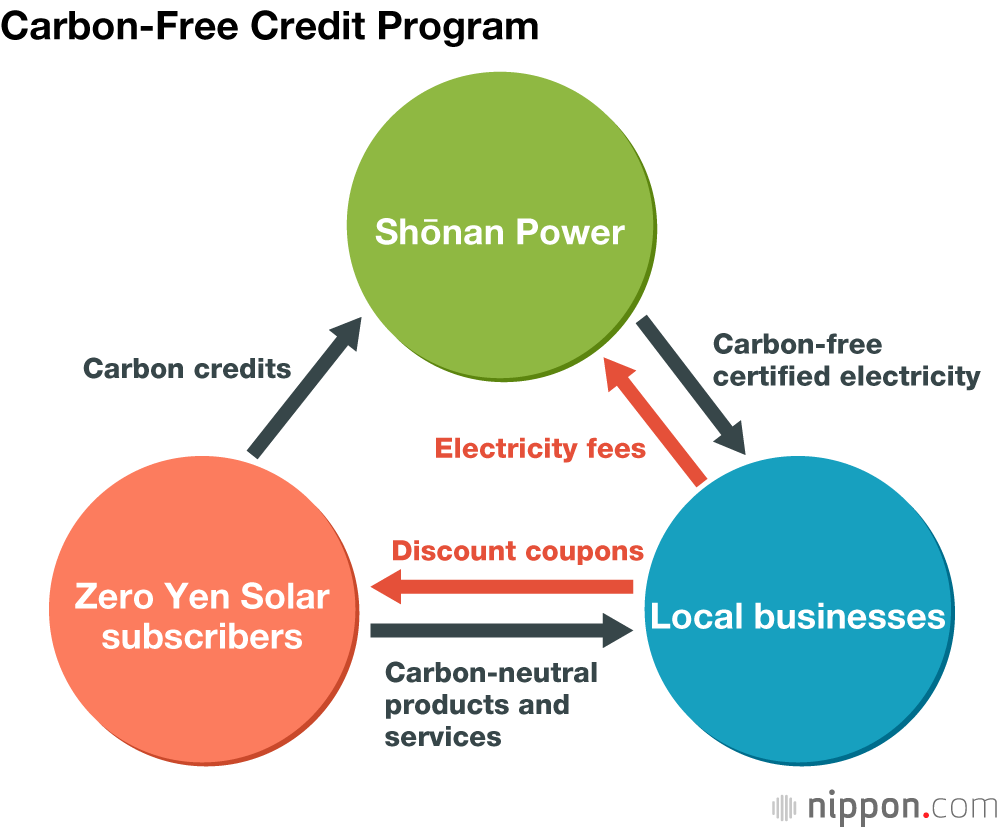 Shōnan Power President Hara Masaki sees the program, which aims to raise awareness reducing CO2 emissions, as a great means of strengthening community ties and the local economy at the same time. “The discount coupons encourage Zero Yen Solar customers to use their carbon credits in their own backyard,” says Hara. “Through these interactions, people support area businesses and build connections in the process.”

Onmori Yufuko owns the Vietnamese restaurant Aulac, one of the businesses participating in the coupon program. She was drawn to it for its climate and business benefits, saying that it provided a “simple way to make the restaurant more environmentally friendly.” She is now labeling several dishes on the menu as carbon free and taking other approaches to entice customers to use their carbon-neutral discount coupons at the shop. 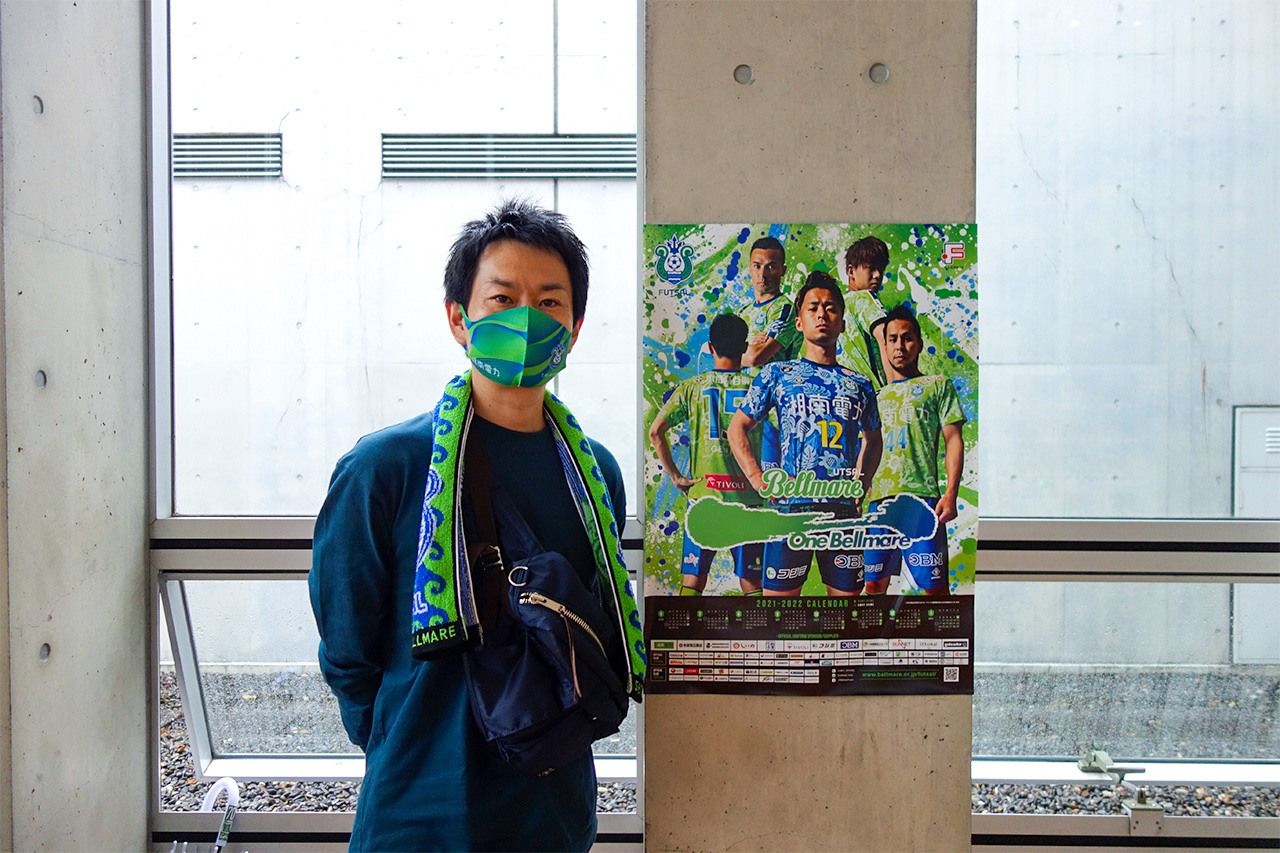 Shōnan Power’s Hara Masaki showing his support for local J. League team Shōnan Bellmare. The company is an official partner of the club, which competes in the top-flight J1 division.

Hara admits that the program, which currently has 133 Zero Yen Solar subscribers in and around Odawara and eight participating businesses, is just getting started. However, he says, the utility is working to increase the scope. This includes boosting power production by expanding areas where panels can be installed to covered carports, garages, and abandoned agricultural land, and partnering with the local Chamber of Commerce and Industry to get more shops using locally produced, carbon-free electricity.

A pivotal aspect of the program is Zeroboard’s service enabling subscribers and participating businesses to track their emissions from a dedicated site by simply entering the amount of electricity they consume. “Individuals may want to reduce their carbon output,” says Tokeiji Michitaka, president of the firm, “but this is hard without being able to see how their actions effect their emissions. It’s key that people can visualize changes in their carbon footprint.” 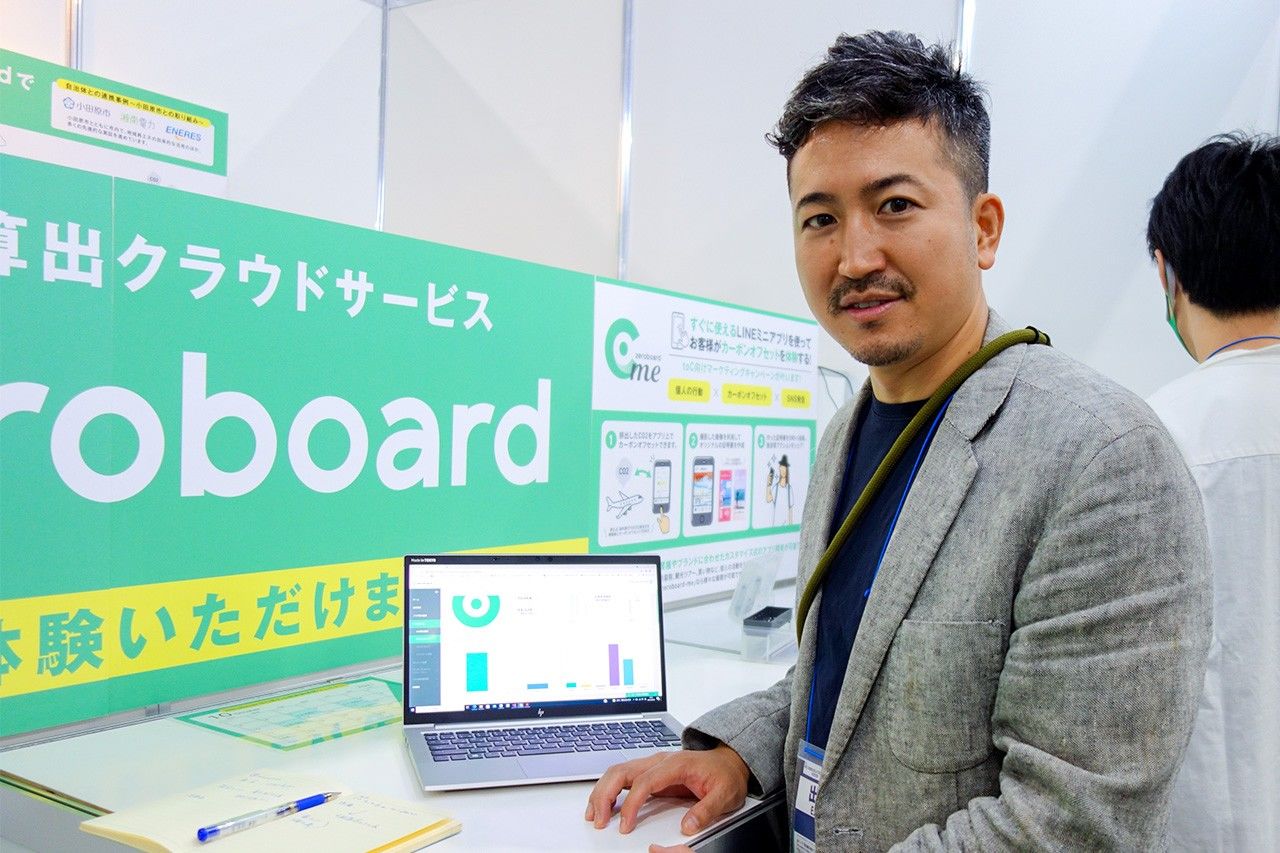 Onmori says that being able to see her emissions has changed her perception. “My restaurant produces more than 7 tons of carbon dioxide annually,” she explains. After joining the program, she says she was surprised that “I was able to reduce the amount of carbon dioxide the restaurant contributed to the atmosphere merely by switching to carbon-free power.”

Although Shōnan Power charges more per kilowatt hour than larger utilities generating power from carbon-emitting sources, the higher rates promote conservation of electricity by encouraging customers to cut down on wasteful practices and install energy-saving devices, which has benefits beyond just reducing utility bills.

Amid a growing surge of global companies making carbon-neutral pledges, restructuring of the Tokyo Stock Exchange’s Prime Market slated to go into effect in April 2022 will require firms to boost the quality and quantity of their climate-related disclosures. The main goal of the changes is to attract more foreign investors. Large corporations have been leading the way in Japan by announcing plans to cut their carbon to net zero, a trend that is expected to encourage smaller businesses to do the same. Financial institutions are also getting in on the action by providing loans at preferential interest rates on the condition that companies decarbonize. 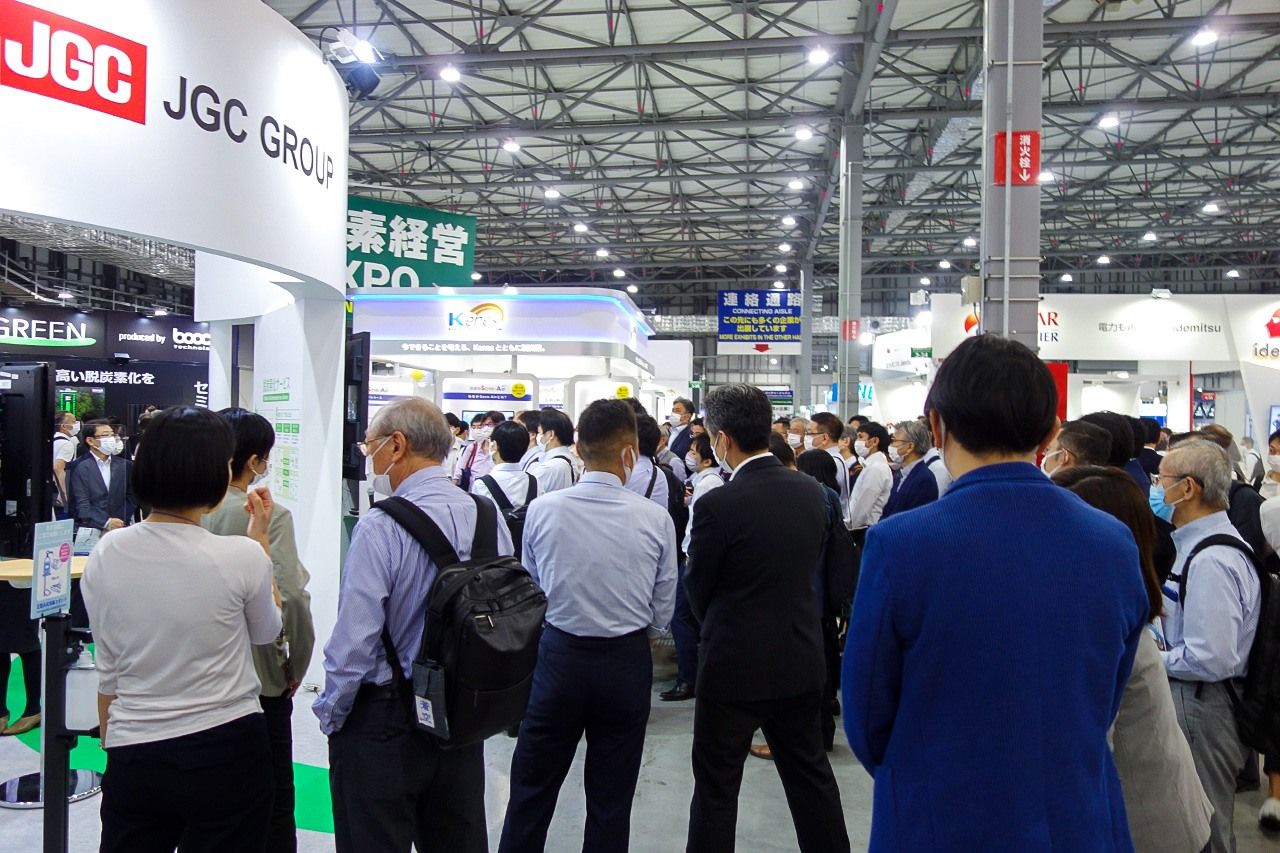 Attendees outside a seminar on carbon-free business practices during the industrial exhibition World Smart Energy Week at Tokyo Big Sight on September 29, 2021.

As more companies seek out clean forms of energy, Tokeiji of Zeroboard predicts that demand for emission tracking services will grow, but warns that competition over renewable power will increase as demand begins to outstrip supply. This scenario raised the issue of how the business sector going forward will meet its burgeoning appetite for carbon-free energy.

The twenty-sixth UN Climate Change Conference (COP26) kicked off in Glasgow, Scotland, on October 31 as the UN Intergovernmental Panel on Climate Change sounded the alarm over the imminent threat of global warming. Ahead of the conference, the Japanese government revised its basic energy plan, giving “top priority” to increasing renewable energy, which lags behind other developed countries. Prime Minister Kishida Fumio, who sees nuclear energy as an important option, is considering restarting idled reactors as part of the plan.

However, Suzuki sees this as premature, arguing instead that companies and private citizens can do more to save energy. “Renewable power isn’t only about generating electricity,” he stresses. “We’ve just begun to scratch the surface of applications of solar and geothermal energy, as well as wood biomass. We need to explore other carbon-free options on the table before recommitting to nuclear power.” 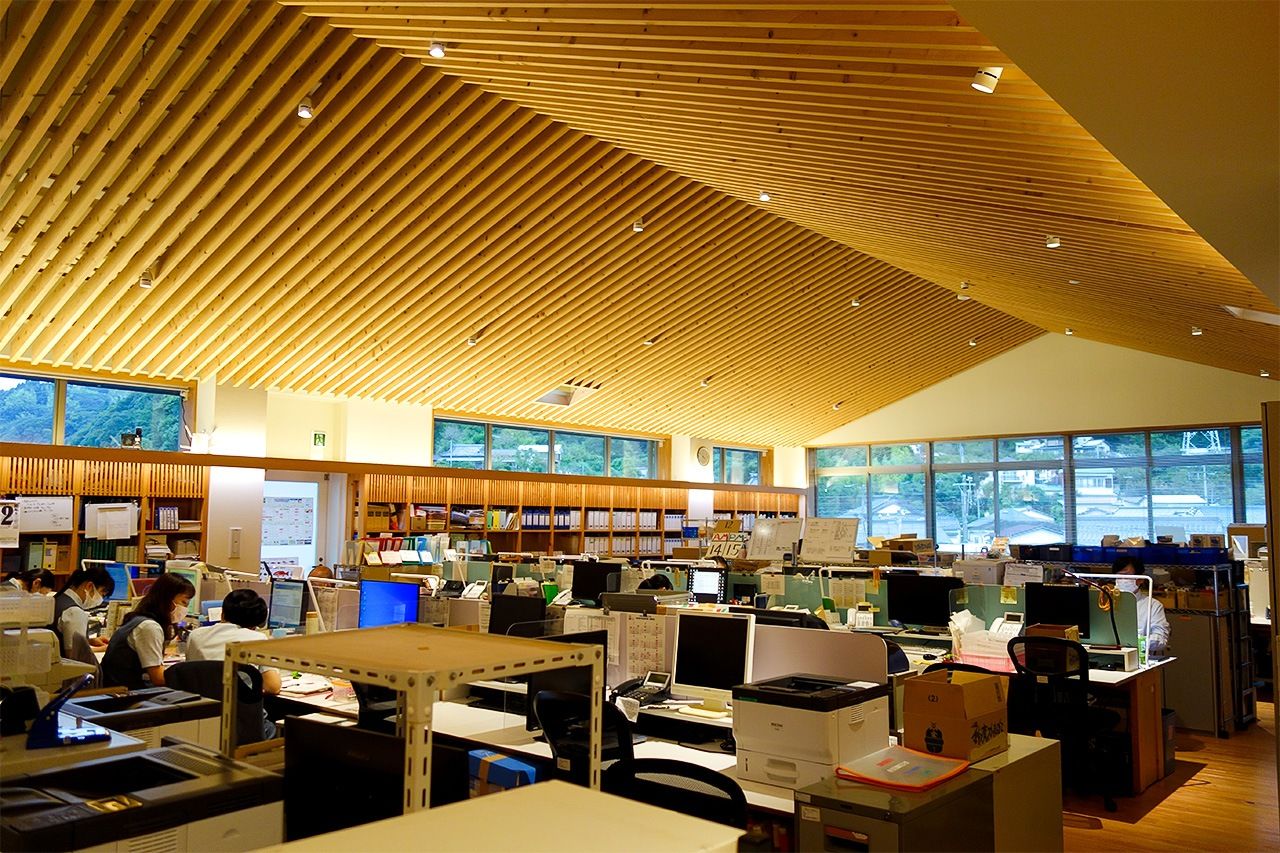 The offices of Suzuhiro use a mixture of solar power, geothermal energy, and ground water, which has reduced energy use by two thirds.

Odawara’s efforts are small on the grand scale of the global environment, but Suzuki is working to sell other regions on the benefits of generating and consuming energy locally. He has formed a network of some 300 small and medium-sized business owners across Japan to study different approaches. He stresses that there is no one-size-fits-all model, though. “Each region faces its own unique situation,” he explains. “Local stakeholders need to come up with independent energy systems that fit the needs of their communities. However, if these independent efforts can be organically connected, we can help each other as the need arises.”