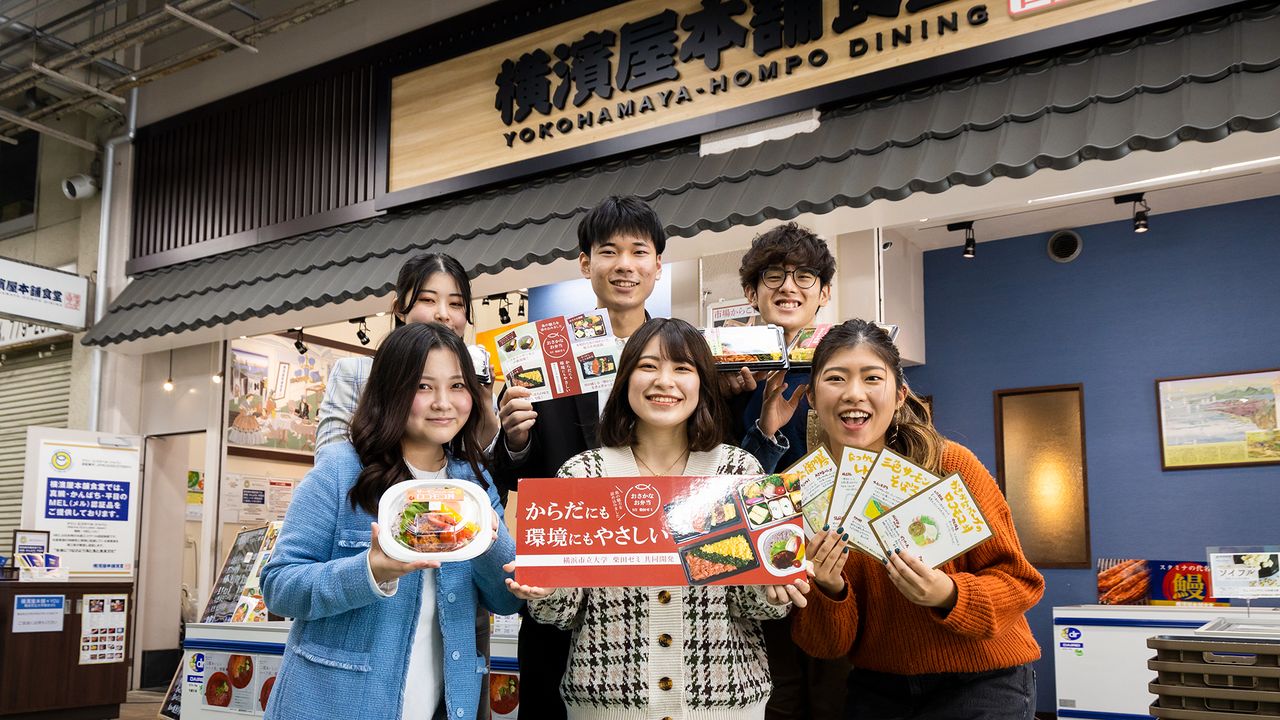 Food and Drink Guide to Japan Feb 3, 2022
The United Nations’ Sustainable Development Goals are gaining momentum in a variety of fields. One endeavor gaining popularity in Japan is the “Fish SDG” to cut food loss and waste in the fisheries industry. At one fish market, a wholesaler is adopting ideas proposed by young people to make the best use of resources and revive Japan’s traditional seafood-based diet.

At the Yokohama Nanbu Market in the city’s Kanazawa Ward, Yokohama Food Service Co., Ltd, a marine product wholesaler that also operates the restaurant Yokohamaya Honpo Dining, is working with students at Yokohama City University to develop new products and systems to help achieve the UN’s SDGs. In October 2021, the company secured certification from Marine Eco-Label Japan for its processing and distribution of marine products. 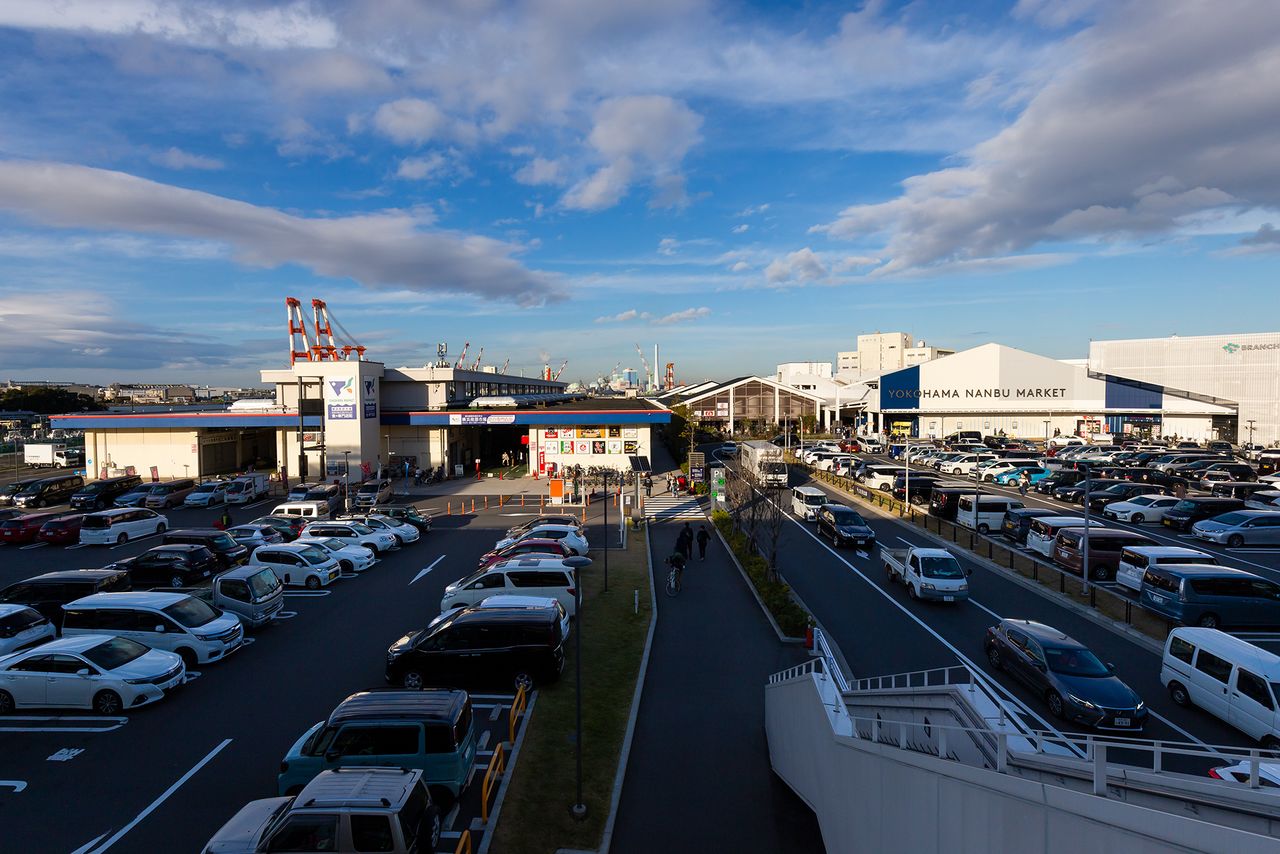 Yokohama Nanbu Market has both wholesalers and retailers selling marine products, fruit and vegetables, and fresh flowers. The building on the left houses a variety of eateries, including Yokohamaya Honpo Dining. 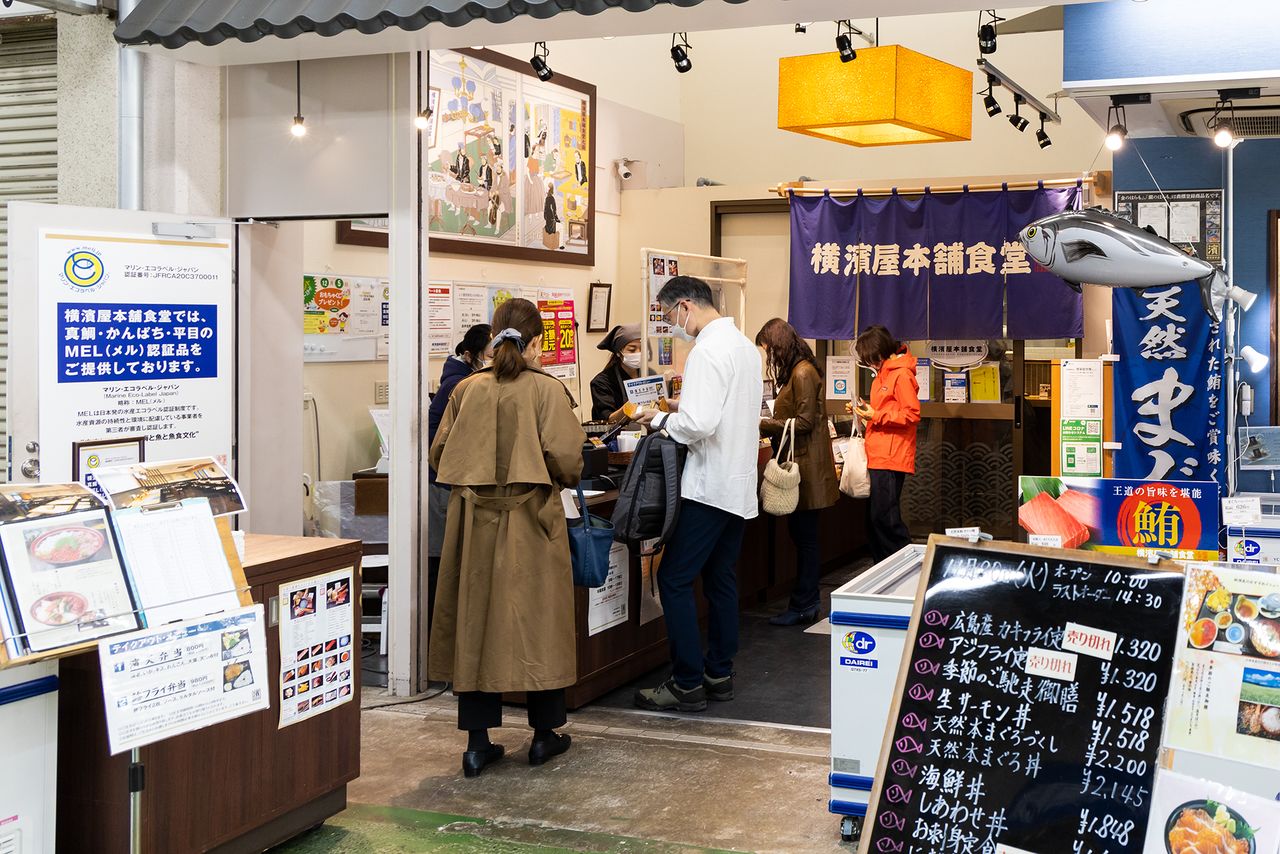 Yokohama Food Service aims to further contribute to the pursuit of the UN goals by cutting down on food loss, finding ways to make use of the tuna and salmon scraps generated in its processing systems. More than 20 tons of scraps are generated every year in the cutting of tuna sashimi blocks. Previously, the scraps, cleared of bones and gristle, were sold to specialized merchants at around ¥17 per kilogram.

The scraps left after processing tuna and salmon are often quite meaty, and Seto Kiyoshi, president of Yokohama Food Service, was sure there must be better ways to put them to use. He consulted with Shibata Noriko, a marketing researcher and associate professor at Yokohama City University, and together they decided to have her students collaborate with the company to codevelop new products that would make use of the fish scraps. 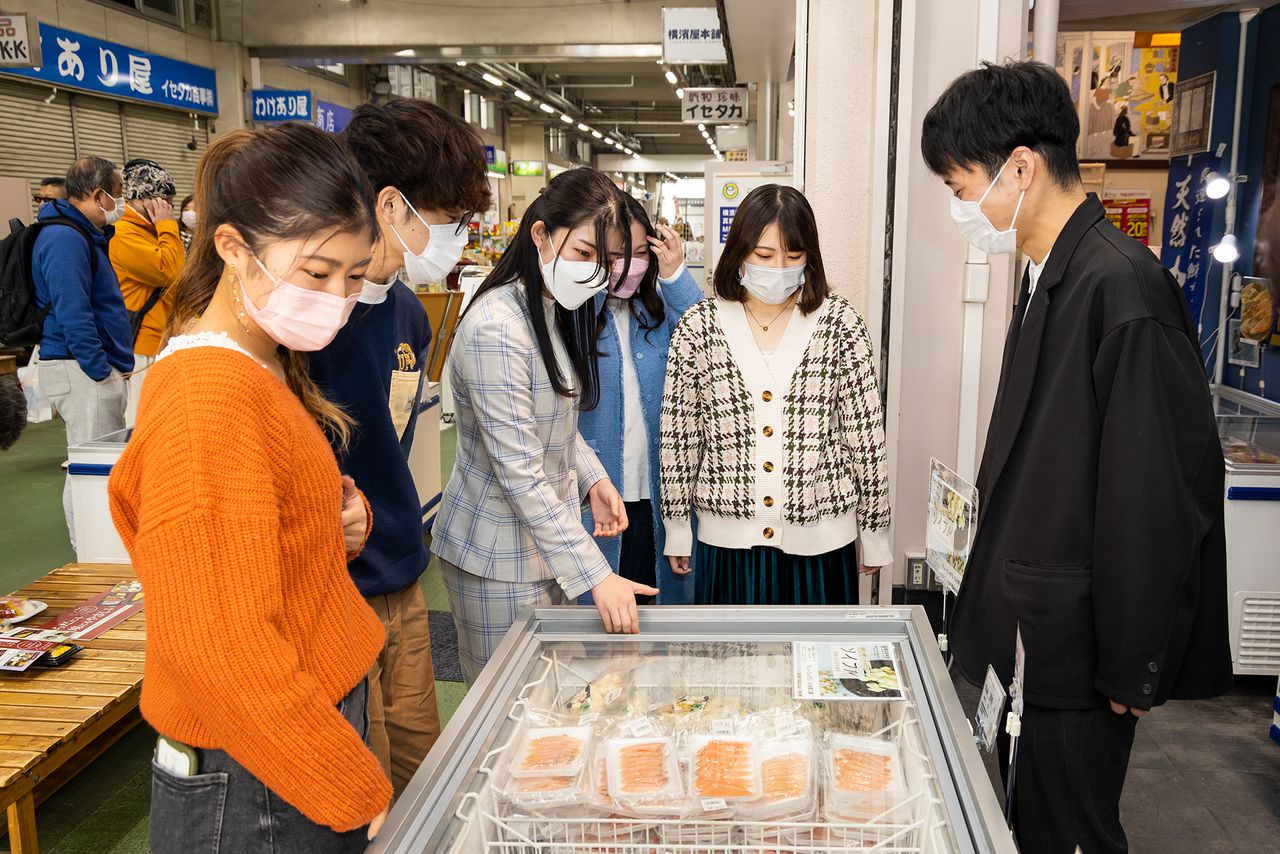 Professor Shibata’s marketing seminars were already well-known for their food-related focus. In 2021, her students won second place in the nationwide Agriculture Competition, in which university students present their research on Japan’s agriculture, food, communities, and agricultural cooperatives. In another intercollegiate competition related to economics, a team of Professor Shibata’s students came out at the top among 132 competing teams.

With this background, Professor Shibata’s students lost no time after it was decided to collaborate with Yokohama Food Service to launch a project to promote the eating of seafood in Japan. Changes in lifestyles spurred by the COIVD-19 pandemic have caused many young Japanese to shy away from eating fish and other seafood. Focusing on this recent trend, the group set about to reverse it while at the same time promoting sustainable development goals within the seafood industries.

In the meantime, Yokohama Food Service had already launched its own initiative to cut back on food waste by creating fish burgers made of ground tuna and salmon scraps to be sold with the fresh fish and other foods offered by Yokohamaya Honpo Dining. The use of fish scraps, however, did not mean the new product was cheap. Production involved scrapping every edible bit of meat from the fish bones, a time-consuming and costly process. As a result, the fish burgers were expensive. Additionally, the company had difficulty tying the new product to the SDGs. At this point the students stepped in with suggestions as to how to encourage shoppers to try the fish burgers. “It was the students’ idea to advise customers to fry the fish burgers in sesame oil,” says Seto. 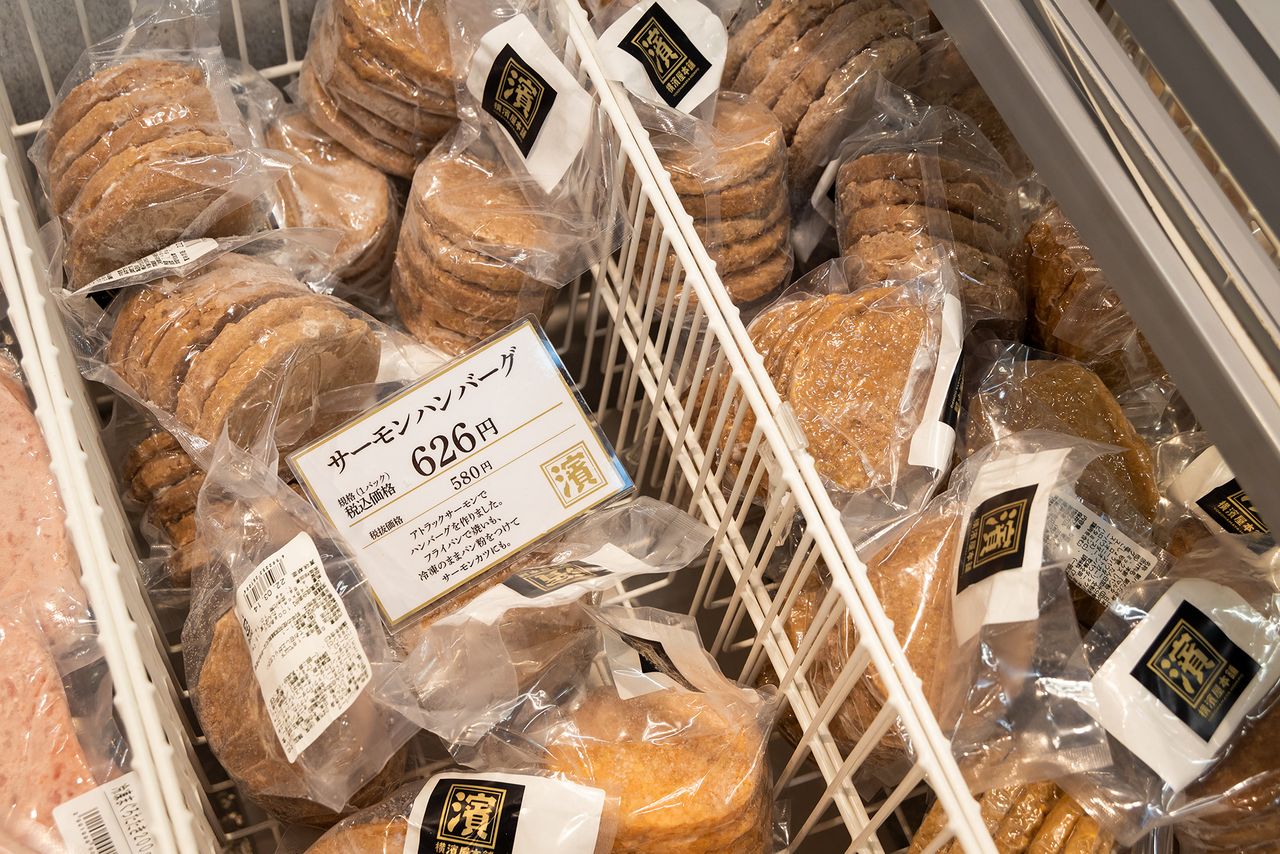 Shibata’s students set about developing bentō box lunches using the new fish patties. After numerous meetings with the company over half a year, they came up with five varieties. Collectively branded Osakana Obentō, or “boxed fish lunches,” the new meals are touted as “kind to the body as well as to the environment,” and are being promoted as SDG meals. 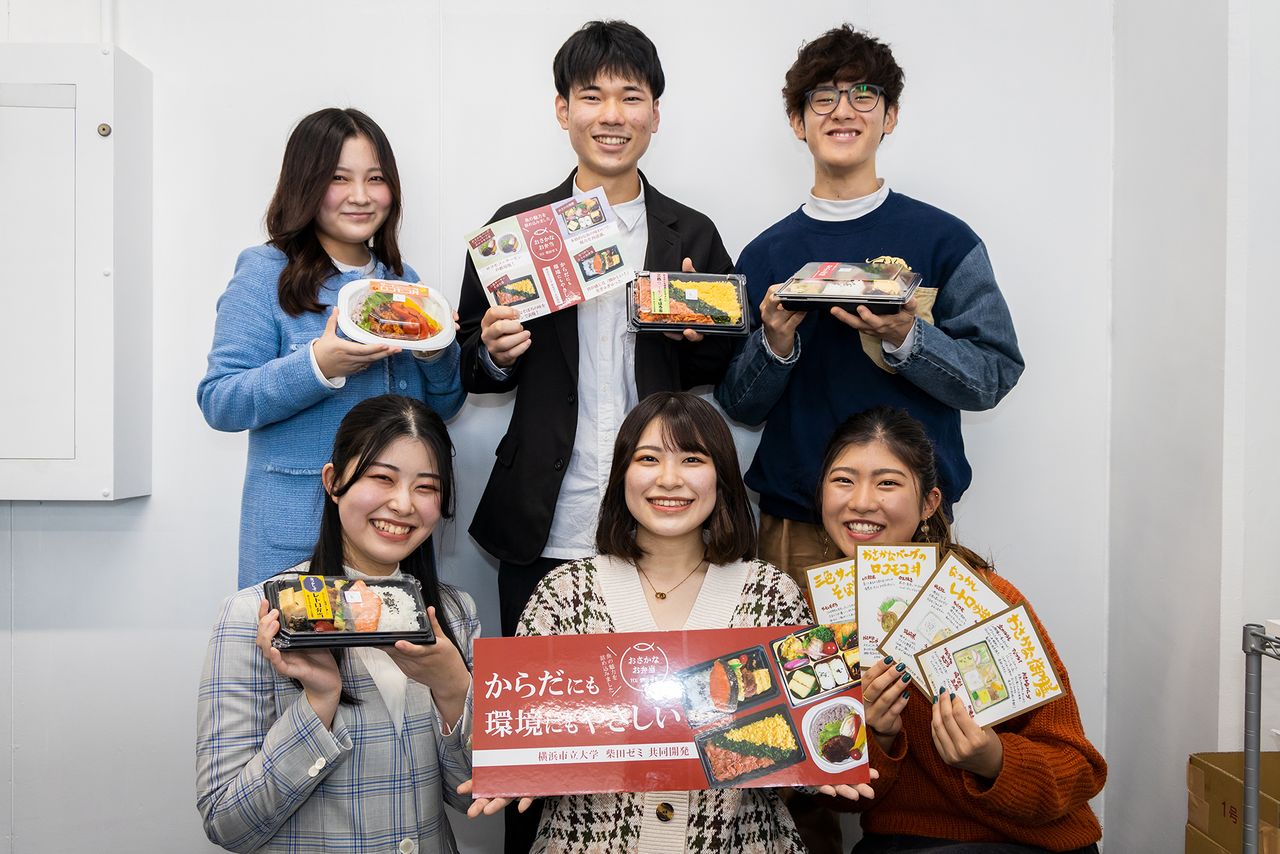 Shibata’s students pose with their SDG bentō boxes the day before the new products went on sale.

One of the five offerings is a tuna or salmon burger loco moco bowl resembling the popular Hawaiian dish. Each bowl has a fish burger smothered in brown sauce on a mound of mixed-grain rice topped with a fried egg, colorful bell pepper and avocado slices, and cherry tomatoes.

Another selection is the three-colored salmon bentō that is just as colorful, with toppings of pink sweet-and-sour shredded salmon, green spinach, and scrambled egg on white rice. The three toppings are applied at a novel, appetizing diagonal slant . The students who designed this bentō box did so for Instagrammable effect, convinced that its appearance on social media will help to spread awareness of the SDGs. “We never would have thought of this or the loco moco bentō box,” says Seto with admiration. “These young people really know how to make these dishes look appealing.” 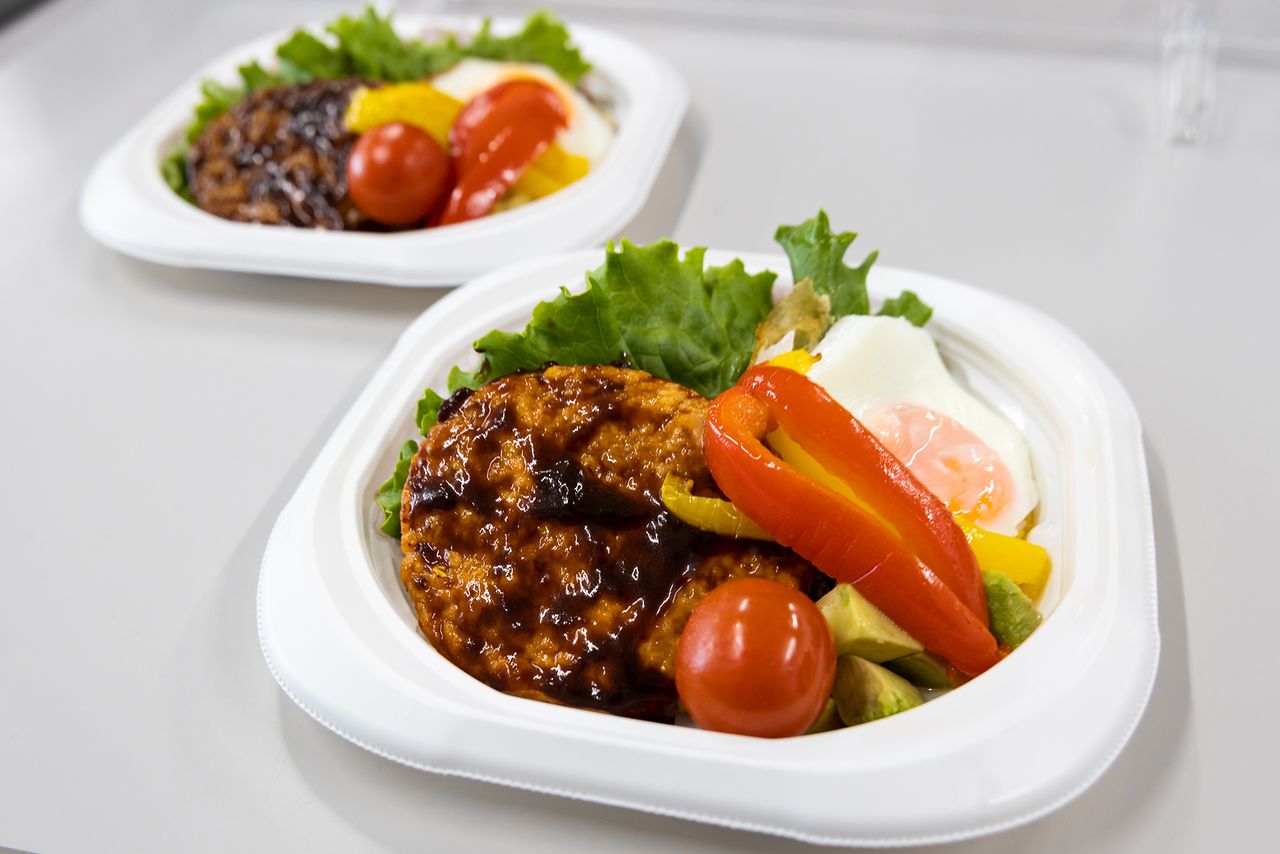 Both the salmon and tuna fish burger loco moco bowls are priced at ¥498. The female students say the idea came to them at a café. 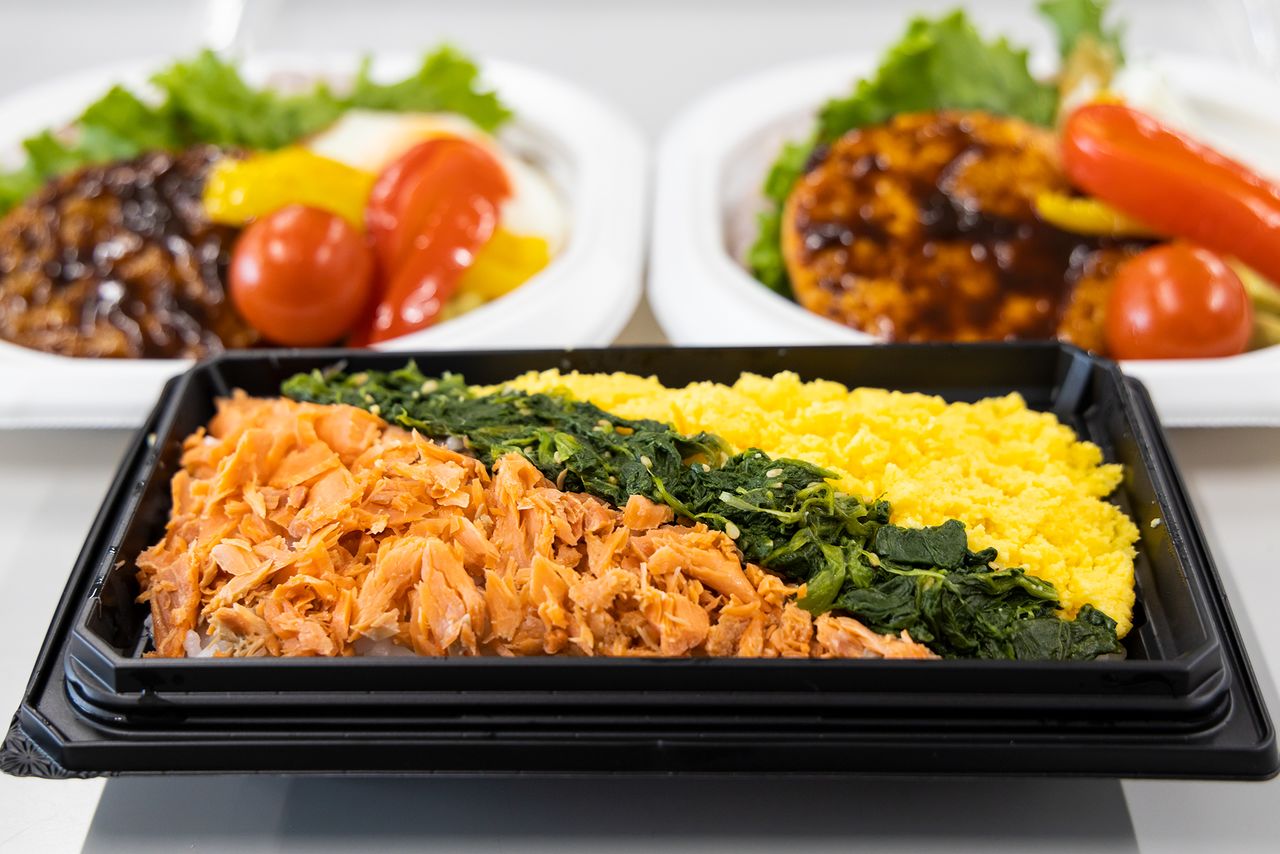 The three-colored salmon bento box with its striking striped design is ¥450.

The premium Osakana Gozen bentō is the most expensive of the five prepared by the students, but its contents are well worth the price. The box contains a tasty assortment of salmon fish burger, deep-fried horse mackerel, tuna grilled with Saikyō miso paste, chikuwa fish paste tempura rolls, pieces of kamaboko fish paste, deep-fried tofu, and egg omelet that rival even the best makunouchi variety bentō box. Says one of the students with pride, “We tried to include as many fish products as possible—grilled, fried, and pasted fish, as well as tempura. It’s definitely a full meal.” 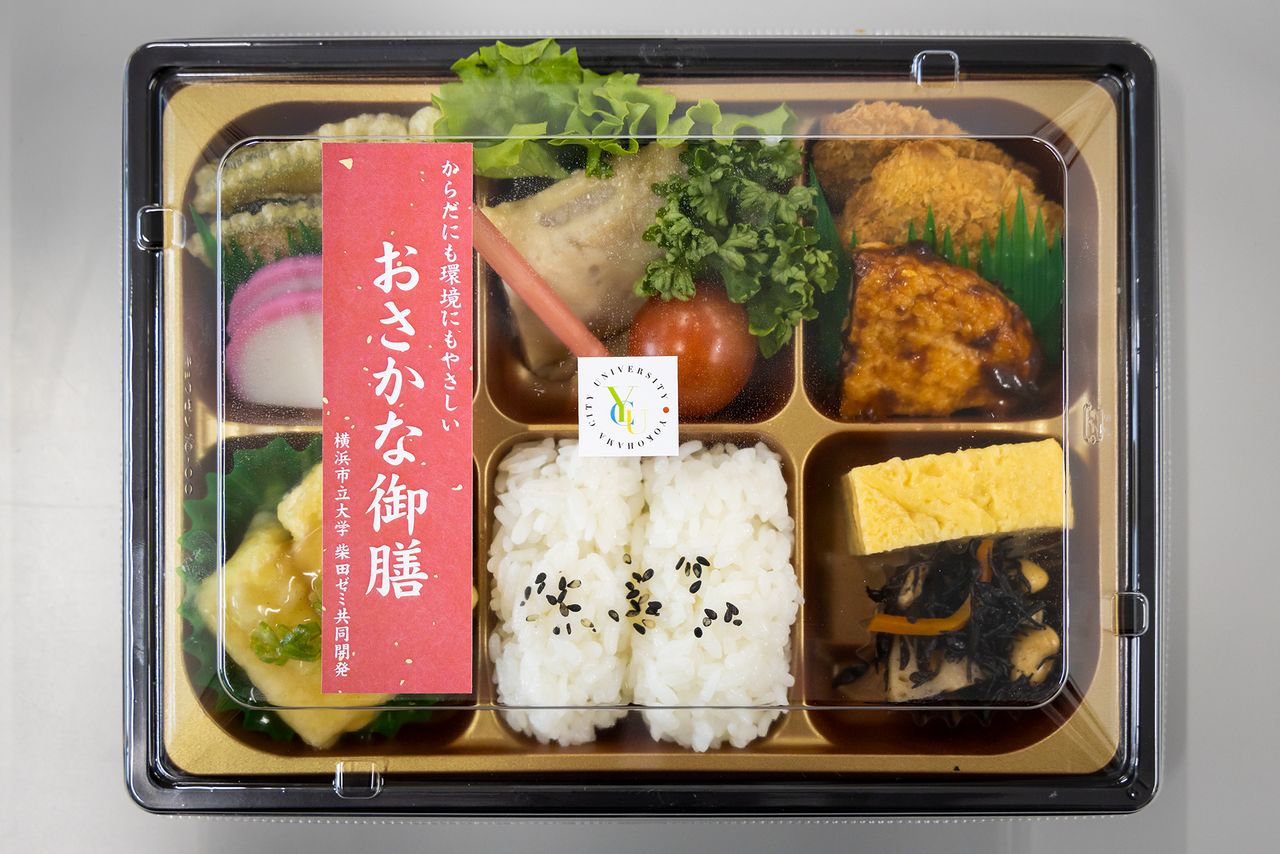 SDG Containers as well as Contents

The bentō containers, including that for the “retro” offering containing salted salmon, deep-fried chicken pieces, chikuwa tempura, and miniature red wieners, are all biodegradable plastic containing 30% plant-based biomass material. The containers were also the idea of the students who saw no point in using SDG ingredients if the containers remained the usual plastic type.

The five SDG bentō varieties debuted in a Yokohama supermarket on December 1, advertised with eye-catching posters designed by the students. The meals have already proven to be a hit with local customers and will continue to be sold in the supermarket throughout the year, with the exception of the year-end and New Year holidays.

Looking back on the project, the students say, “Implementing sustainable development goals seems like a major task until you realize you can start small.” They also urge people to “try our bentō box lunches. We’re sure you’ll feel the satisfaction of having ‘done an SDG.’” 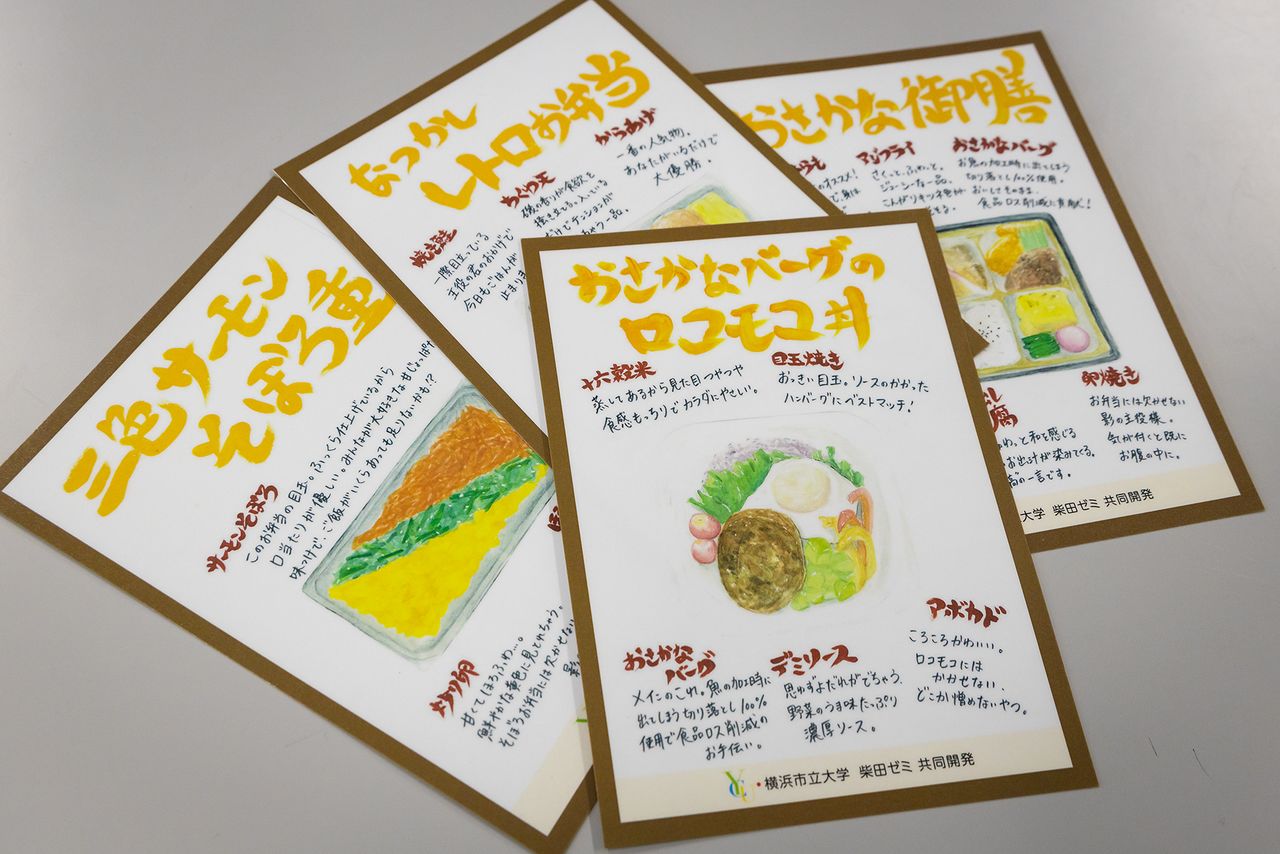 The students’ handmade posters have a special appeal.

The Yokohama Food Service staff who worked with the students concur. “We learned that the students’ creative approach was more effective than conventional one-way marketing techniques that force themselves on the consumer. It’s important to take such youthful sensibilities into consideration in trying to get young people to eat more fish, which has always been a mainstay of traditional Japanese cuisine. We’ll continue working with the students to revive seafood’s popularity.”

The students take special pride in their achievement. “I always preferred meat, but after working on these bentō, I have come to realize how tasty and nutritious fish can be,” says one of the group. “I’m going to keep promoting the appeal of fish and other seafood, along with the need to strive for sustainable development goals.” 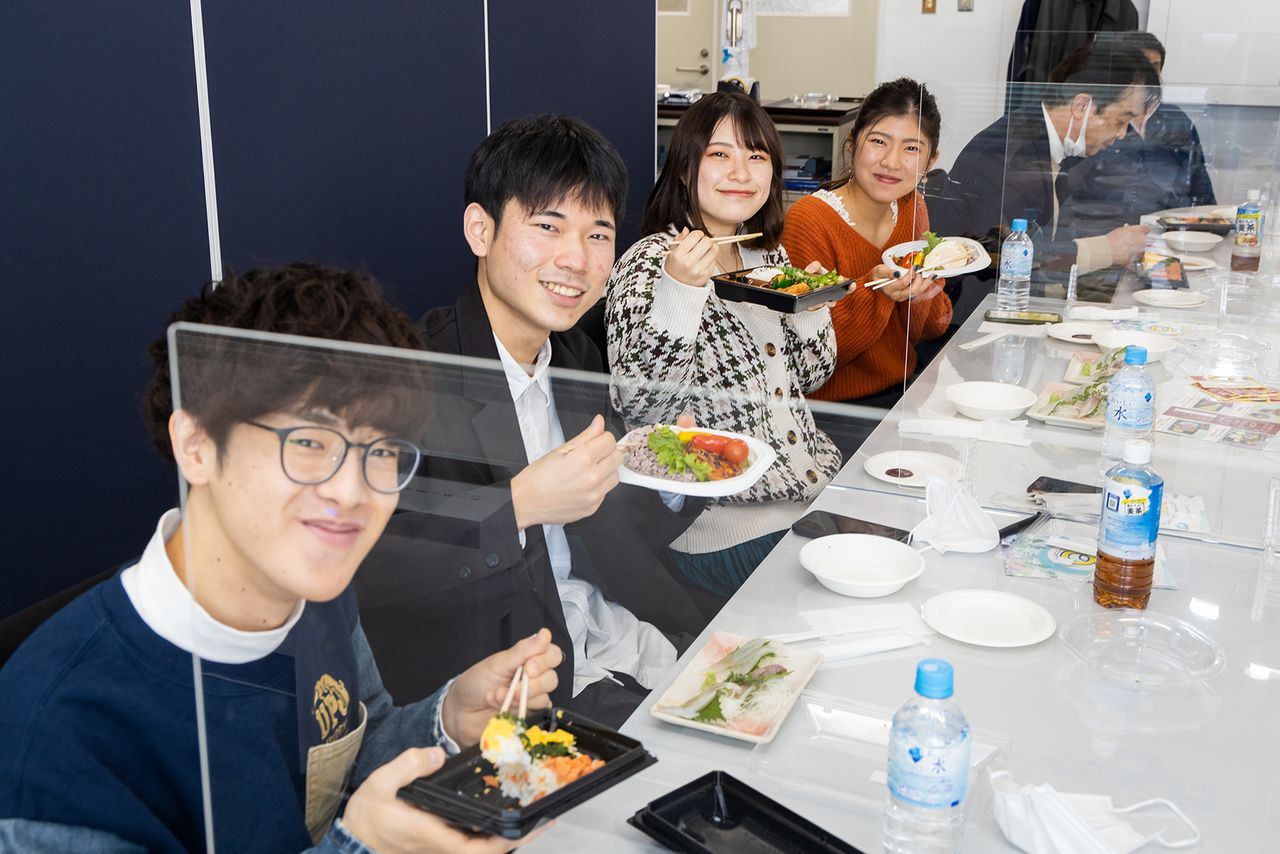 The students savor the box lunches they created. “Once they go on sale, I’m going to buy one of every kind,” asserts one team member.