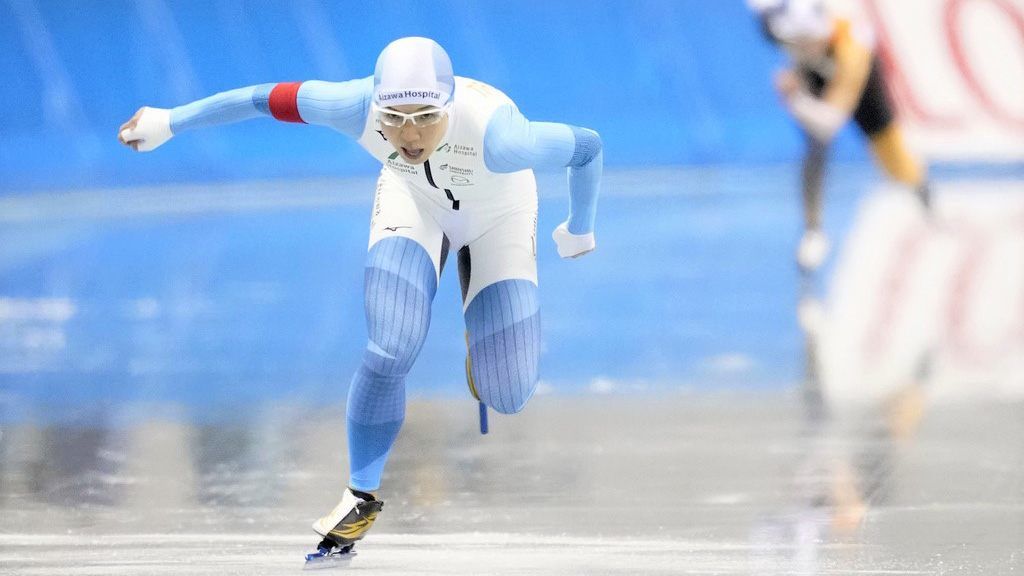 Sports Feb 10, 2022
Speed skating queen Kodaira Nao won two medals, including a gold in the 500 meters, at Pyeongchang, but has been slowed by injuries over the last several seasons. She is determined to put the adversity behind her in Beijing as she defends her title in her fourth Olympic games.

Speed skater Kodaira Nao sped to glory at the 2018 Winter Games in Pyeongchang, winning gold in the 500 meters in Olympic-record time. The 35-year-old veteran is looking to repeat her performance in Beijing, her fourth Olympics, but has faced an unexpected uphill battle just to get to the starting line. Following Pyeongchang, Kodaira has been plagued by soreness in her left hip that has affected her performance. Last season, the issue saw her relinquish her title as five-time national champion in the 500 meters.

Finding herself in a dark tunnel with no way out, Kodaira decided to leave the ice midway through the 2020/21 season and dedicated herself to training, with the aim of rebuilding her strength and form. This gamble paid off, and in top physical condition again, Kodaira has put in a strong showing at International Skating Union World Cup events so far this season. 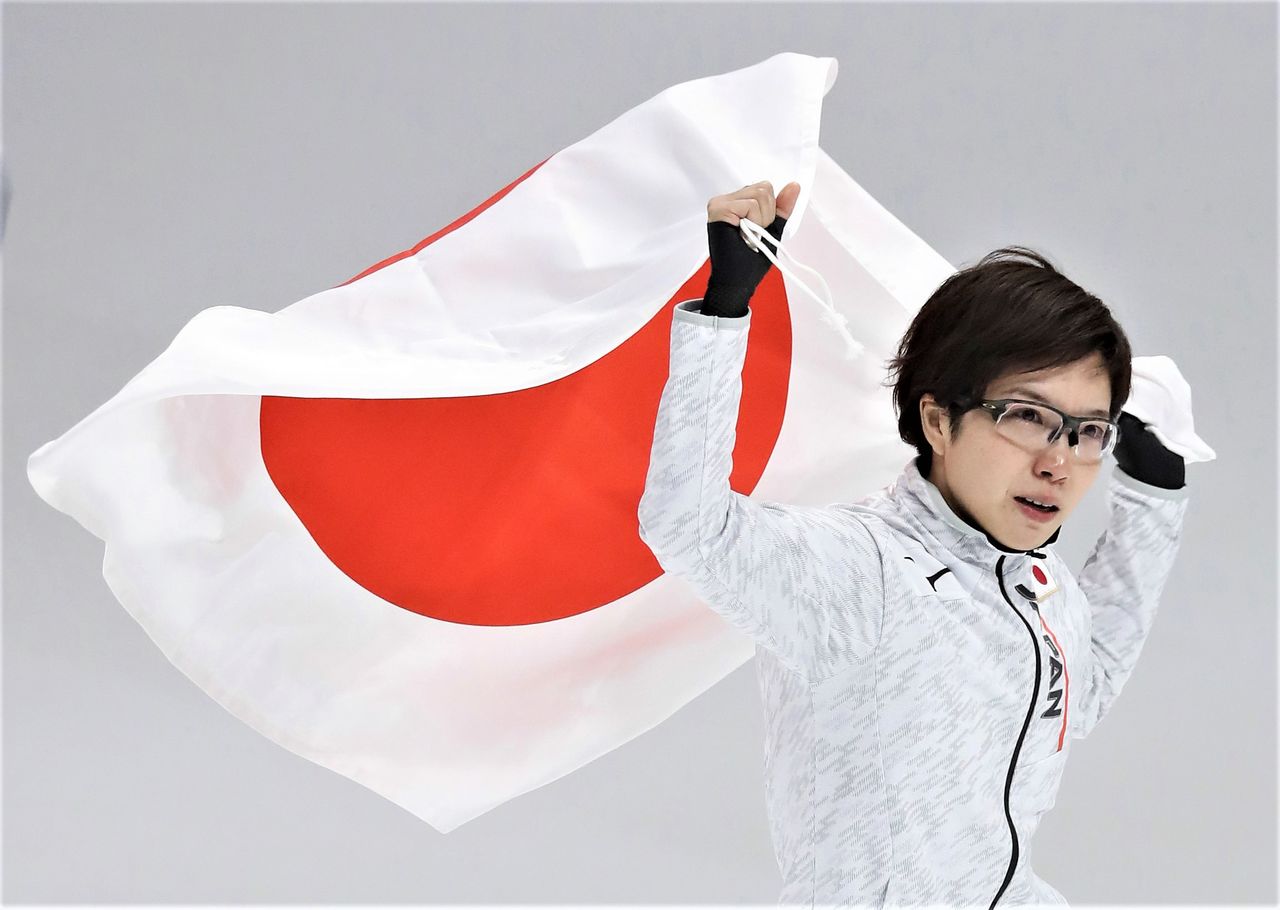 Kodaira Nao celebrates her victory in the 500 meters on February 18, 2018, at Gangneung, South Korea. She is the first Japanese woman speed skater to win Olympic gold in the event. (© Jiji)

Racing in the 500 in Norway in November, Kodaira claimed her first World Cup win since February 2020. Then in Canada in December, she prevailed in the 1,000 meters at the fourth Cup event of the season. The titles brought her total career World Cup wins in the 500 and 1,000 meters to 34, equaling the record set by Nagano Olympics men’s 500-meter gold medalist Shimizu Hiroyasu.

Kodaira’s dazzling comeback is the result of her pursuing a bold strategy in the face of adversity and her unwavering determination, a characteristic she honed as a youth.

Born in Chino, Nagano Prefecture, Kodaira followed her two older sisters onto the ice, making her skating debut at the tender age of three. She displayed a talent for the sport from the start that astounded the adults around her. But it was the 1998 Nagano Olympics that inspired the then 11-year old Kodaira to devote herself to skating. She says that watching women’s 500-meter bronze medal winner Okazaki Tomomi and men’s 500-meter gold medalist Shimizu race moved her beyond words.

After the games, Kodaira threw herself into speed skating. Her talents really began to blossom in junior high when she joined her school’s skating team and enrolled in a local ice-skating club. During the winter, she trained late into the night at rinks in Chino and nearby Okaya, sometimes not getting home until 11:00 pm. By her second year of junior high school she was competing in junior national tournaments, and in her third year, Kodaira attracted attention by winning the Japan Junior Championships. 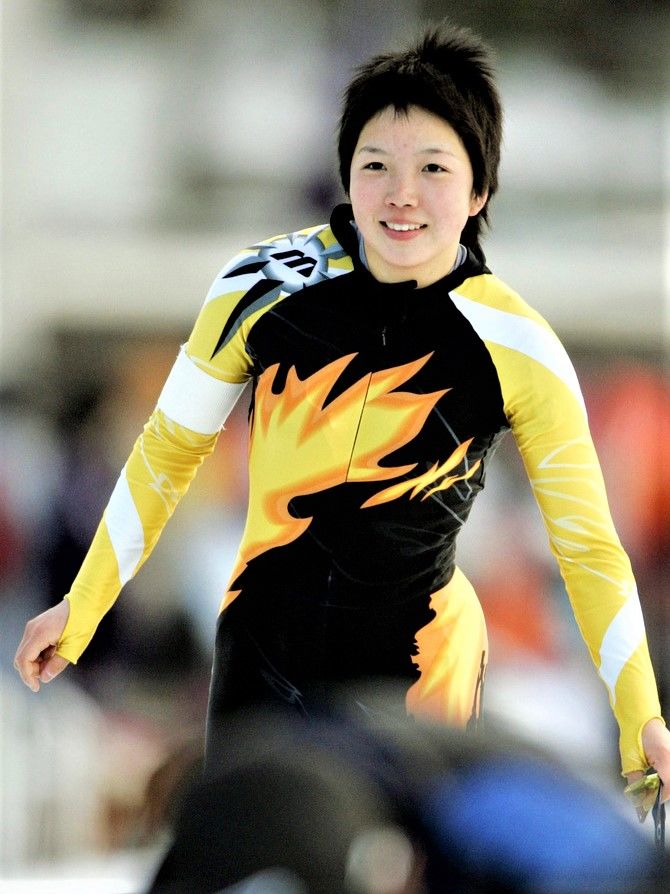 Kodaira at the 2005 National High School Skating Championships. Her strength on the ice was apparent from the time she was a junior competitor. (© Kyōdō)

In junior high she broke a number of junior records and was wooed by elite sporting high schools. However, she ultimately chose to attend nearby Inanishi High School, initially boarding with her coach’s family before moving into an apartment for her final two years. She trained relentlessly, heading to the rink before school, after school, and even at night.

A major turning point in Kodaira’s early skating career was her decision to attend Shinshū University. Yūki Masahiro, whose scientific approach helped Shimizu win gold at Nagano, taught at the school, and Kodaira while still in her first year of high school made it her aim to get admitted to the university on a sporting recommendation. Training remained her top priority, so she says she focused intently during classes so that she could cover all the material without needing to do any additional study, which would eat into her time on the ice.

Kodaira says balancing skating and her studies came down to putting her faith in the path she had chosen and then doing her best to make it work. Whatever the outcome, she was guaranteed to benefit from the experience. Kodaira realized that any decision she made on her own was a correct decision, even if it did not pan out in the end, and this approach remains at the core of her approach to speed skating.

After graduating from Shinshū University, Kodaira began skating for a team sponsored by Aizawa Hospital in Matsumoto. Having turned professional, she became even more dedicated to her skating and grew as a competitor. She made her Olympic debut at the Vancouver Games in 2010, where she raced in the 1,000 meters and 1,500 meters, and won a silver medal in the team pursuit event. 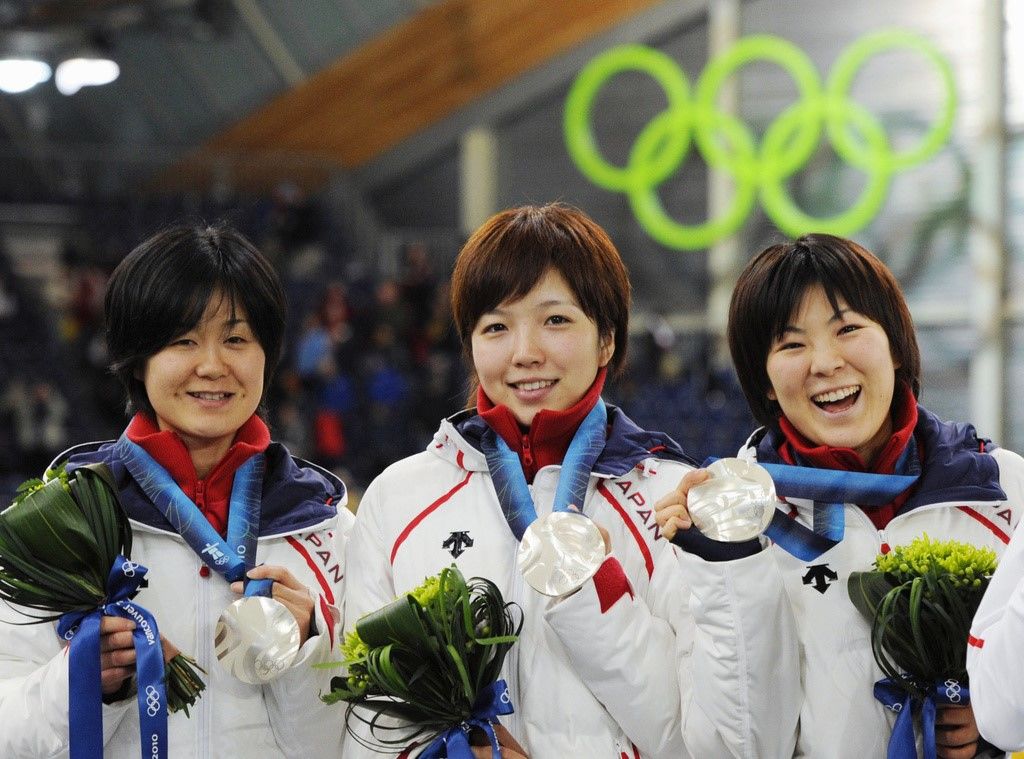 From left, Tabata Maki, Kodaira, and Hozumi Masako show off their silver medals in the team pursuit at the Vancouver Olympics. (© Kyōdō)

The second major turning point of her career came after the 2014 Sochi Olympics. Having finished a disappointing sixth in the 500 meters, Kodaira wanted to rework her form. She decided to head to Europe to train, basing herself in the Netherlands, a speed skating superpower.

In the Netherlands, Kodaira found that she was unable to fully convey her thoughts or properly understand advice on the subtleties of skating techniques in English alone. She set out to learn Dutch to fully appreciate the nuances of discussion. She made a habit of carrying a small notebook around with her and having her Dutch teammates write down new words and phrases for her, which she then diligently memorized. At the end of her two year stay, Kodaira was proficient enough in the language to be interviewed by media outlets in Dutch.

Kodaira would go on to shine at the Pyeongchang Olympics. In January of 2019, though, she realized something was not right with her body. She was in Germany for the world championships, and as an Olympic gold medalist, she attracted attention. “Expectations were high,” she recounts. “It made it extremely hard to admit to myself that I was in bad form.”

Unwilling to show weakness, she pushed through the pain, which in the end prolonged her injury. In November 2020, she hit a wall, her body unable to handle any more punishment. Even though early prep had already begun for the Beijing Olympics, the Japan Skating Federation had cancelled overseas travel due to COVID-19, so Kodaira made the bold decision to rework her form through athletic training.

This turned out to be an inspired decision that would put her on the road to recovery. Reflecting on her defeat in last winter’s all-Japan championship, Kodaira states positively that “most people avoid showing weakness. But true supporters will empathize with your efforts to overcome adversity.”

Looking to Beijing, Kodaira says she intends to prove that she is back and better than ever. “I don’t intend just to show up. I want to blow people away with my performance.” With the defense of her 500-meter title on the line, she says she is fully focused.

At the Pyeongchang games, Kodaira carried the flag for Team Japan at the opening ceremony and went on to debunk the superstition that flag bearers never win by claiming two medals. She has come a long way to qualify for her fourth Olympics and is determined to shine her brightest on the ice in Beijing.

(Originally published in Japanese. Banner photo: Kodaira Nao races in the women’s 1,000 meters during the Olympic trials in Nagano on December 30, 2021. © Kyōdō.)