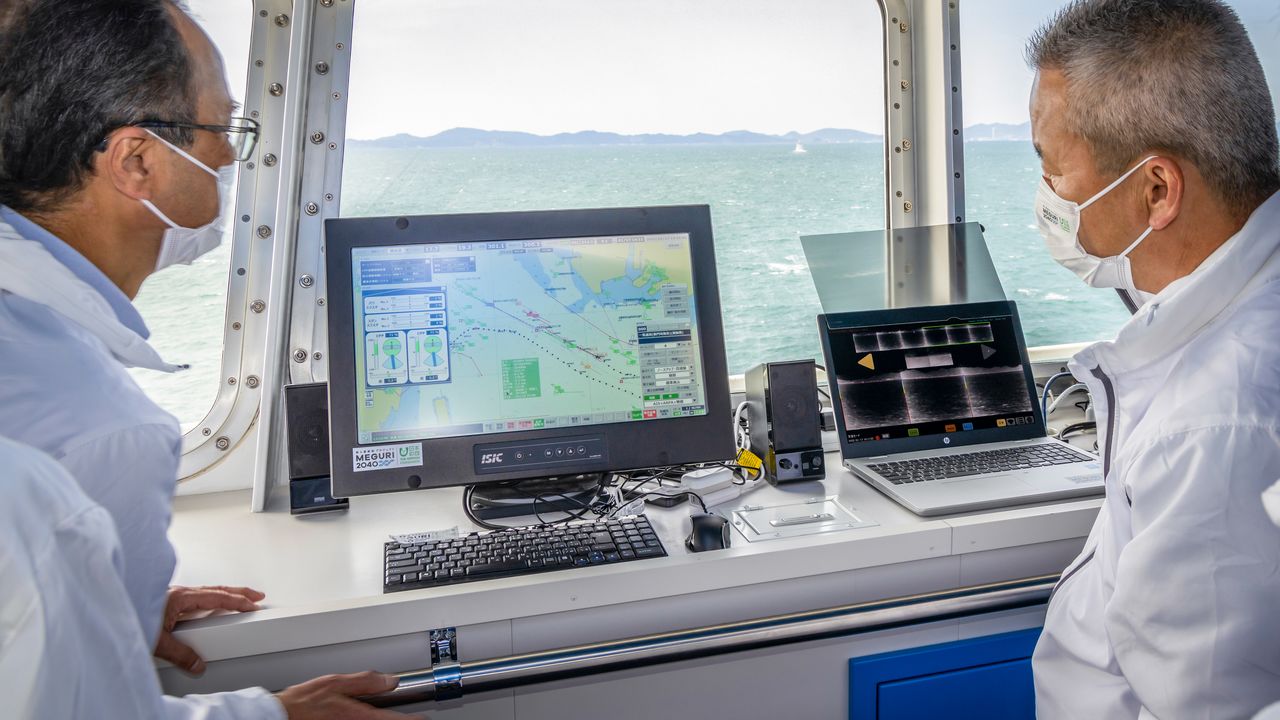 Technology Feb 28, 2022
A recent autonomous test voyage by a large car ferry out of the port of Shinmoji, Fukuoka, was a significant step toward the commercialization of the technology. We look at the latest in autonomous navigation and ask what the future holds for the shipping industry.

The Nippon Foundation, Mitsubishi Shipbuilding, and Shin Nihonkai Ferry recently successfully deployed the 223 meter, 15,500 metric ton Soleil, a large, vehicle-carrying ferry, on an autonomous 240-kilometer return voyage from the port of Shinmoji in Kitakyūshū, Fukuoka, to the Iyonada sea off the eastern coast of nearby Ōita Prefecture. It was the first time for a vessel over 200 meters in length to attempt an autonomous voyage at speeds of up to 26 knots (48 kilometers an hour) that involved auto-berthing. 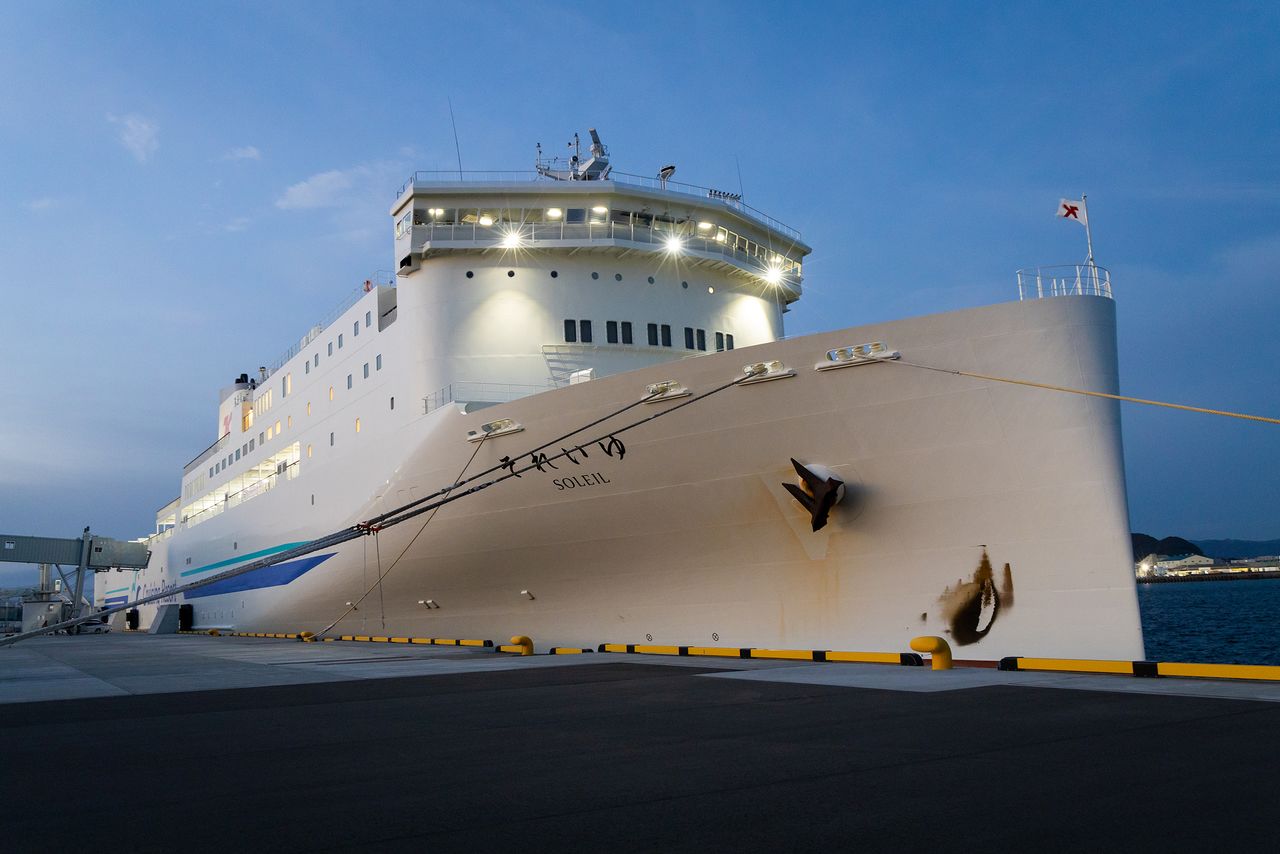 The Soleil, shown here in dock before the voyage, is licensed to carry 268 persons. 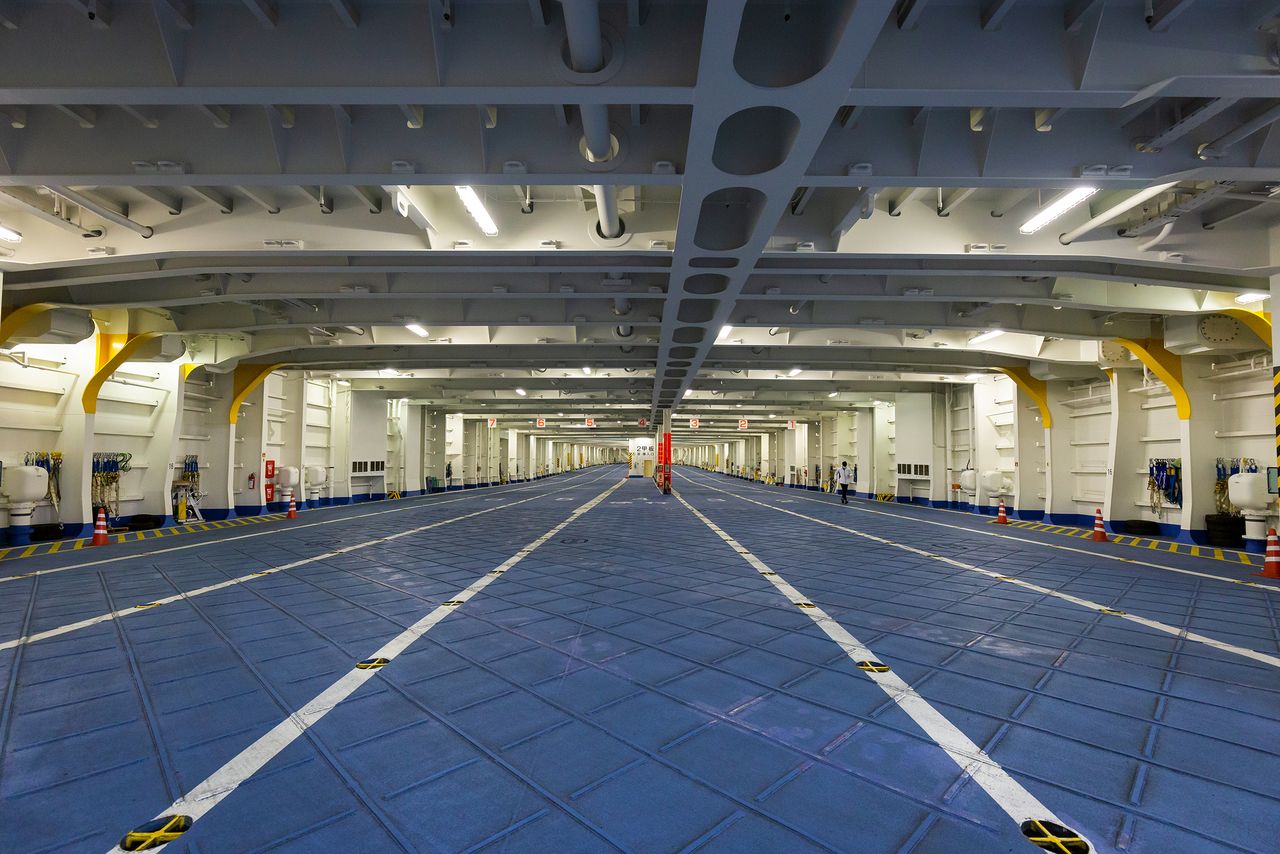 The Soleil, owned by Shin Nihonkai Ferry, was built as a “smart ferry” and has been part of the Nippon Foundation’s Meguri 2040 autonomous shipping project since before it was completed. The ship is fitted with an automatic navigation system from Mitsubishi Shipbuilding. Since being deployed on the route connecting Fukuoka’s Shinmoji with Yokosuka, Kanagawa Prefecture, in July 2021, the Soleil had been collecting data in preparation for its first autonomous voyage.

The January 17 test voyage chiefly tested the Soleil’s autonomous navigation systems, which detect and avoid collisions with obstacles and other vessels, as well as its systems for automatically berthing and unberthing the ship (the equivalent to parking a car) that execute turns and reversing maneuvers. During autonomous operation, the Super Bridge-X autonomous navigation system ensures that the ship travels along the planned route, using automatic identification systems, radar, and a target image analysis system to avert collisions with other vessels. The target image analysis system, which replaces human operators, includes an array of eight infrared cameras that are able detect obstacles precisely, even at night. 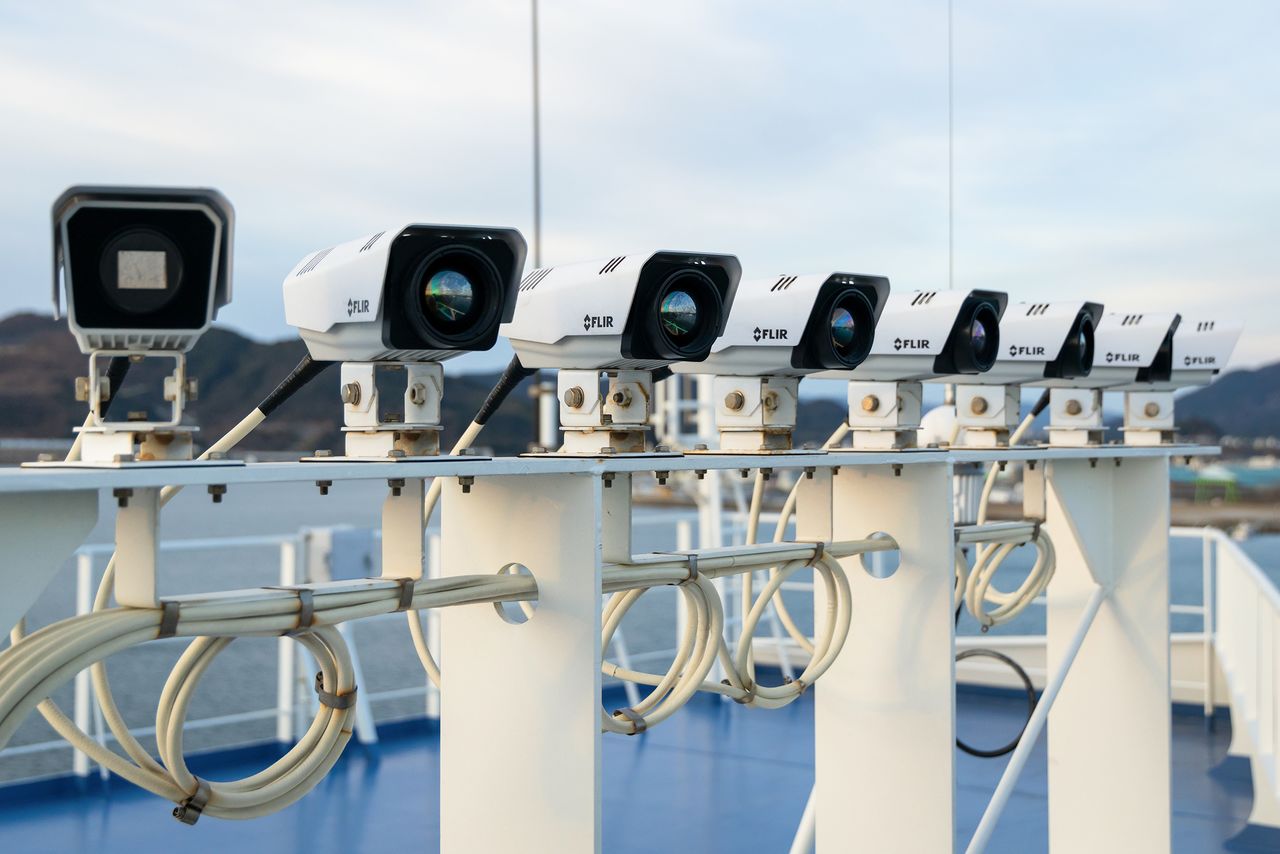 This array of infrared cameras serves as the eyes of the target image analysis system. 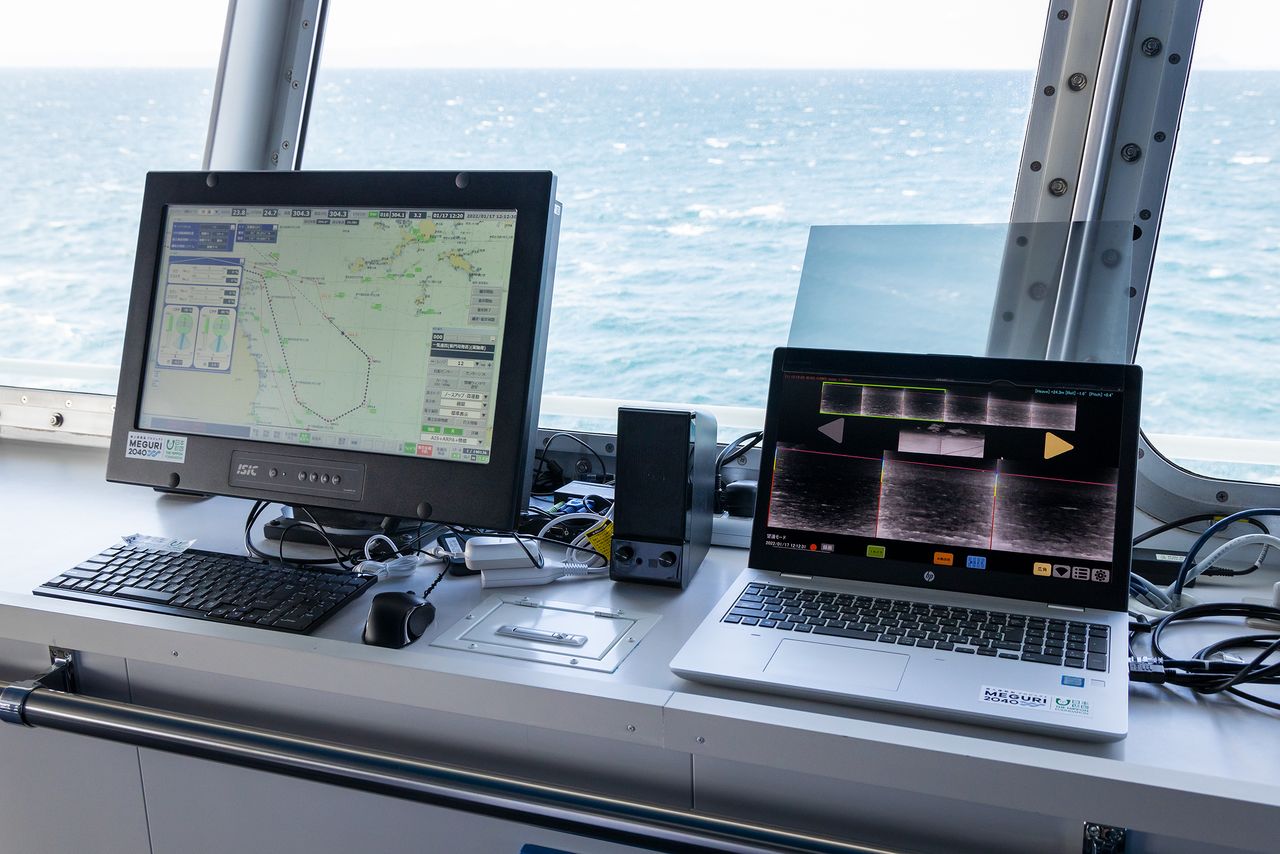 The 5 1/2 hour, 240-kilometer voyage took the ship past fishing vessels and tankers that normally operate in the area. The autonomous navigation system successfully avoided over 10 other vessels travelling at speed. While a human operator took the controls at one point in the voyage, as Mori Hideo, Mitsubishi Shipbuilding’s chief engineer, explains, “The system operated normally. Because it was displaying a route that might have caused the crew of the other vessel some concern, the captain took the precaution of performing a manual avoidance maneuver.”

Mori adds that such issues only emerge once real-world testing has begun, and says that more tests will be performed to resolve any potential issues. 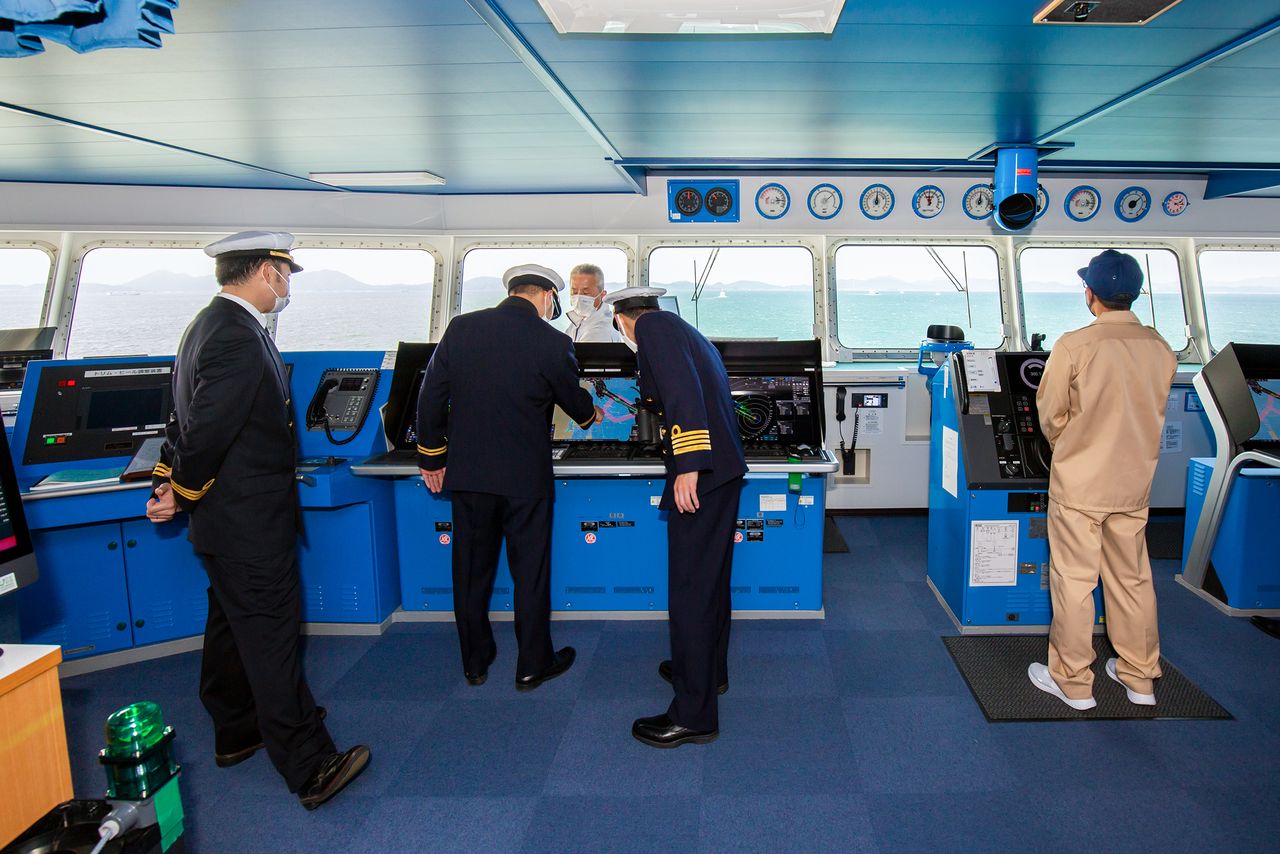 The ship’s bridge during autonomous operation, with no hands on the wheel.

In the test, the ship’s automated berthing systems were tested using a “virtual berth” at sea rather than an actual berth. Unlike the cruise phase of the voyage, in which the system is simply required to drive the ship forward, berthing involves more sophisticated maneuvers including reversing, sideways movement, and turning on the spot. Using information from a LiDAR-based berth proximity system, artificial intelligence activates and controls propellers, rudders, and the bow and stern thrusters that move the ship sideways. Despite challenging conditions with strong winds, the ship executed all maneuvers with flying colors.

The Soleil is also fitted with systems that detect fuel leaks, monitor the status of the vessel’s electric motors, and remotely monitor its engines. All these systems were tested and subjected to simulations on the test voyage as well. Dealing with anomalies that manifest themselves during autonomous voyages is a major challenge, so monitoring the status of systems on a day-to-day basis to identify the slightest signs of a malfunction makes it possible to provide more targeted maintenance. 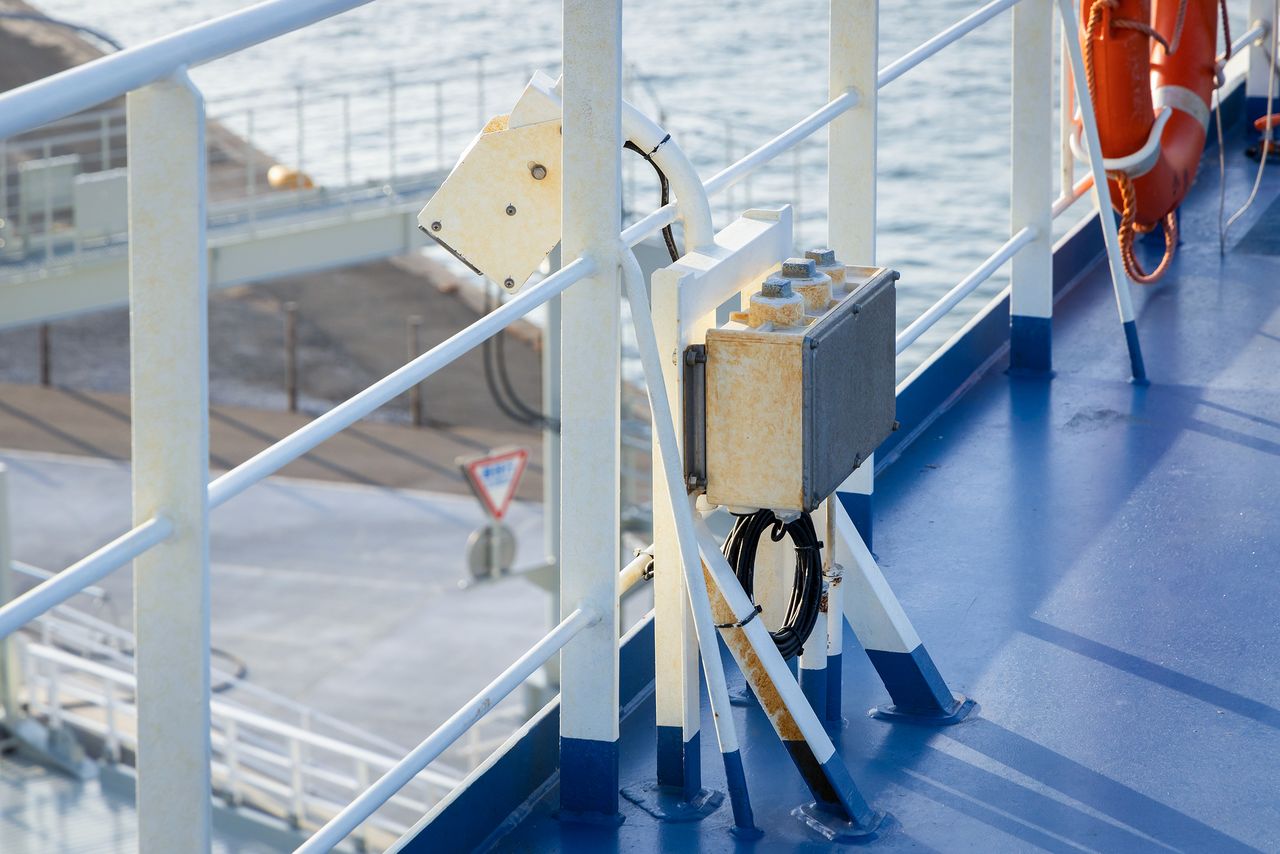 LiDAR determines the proximity and position of the berth. 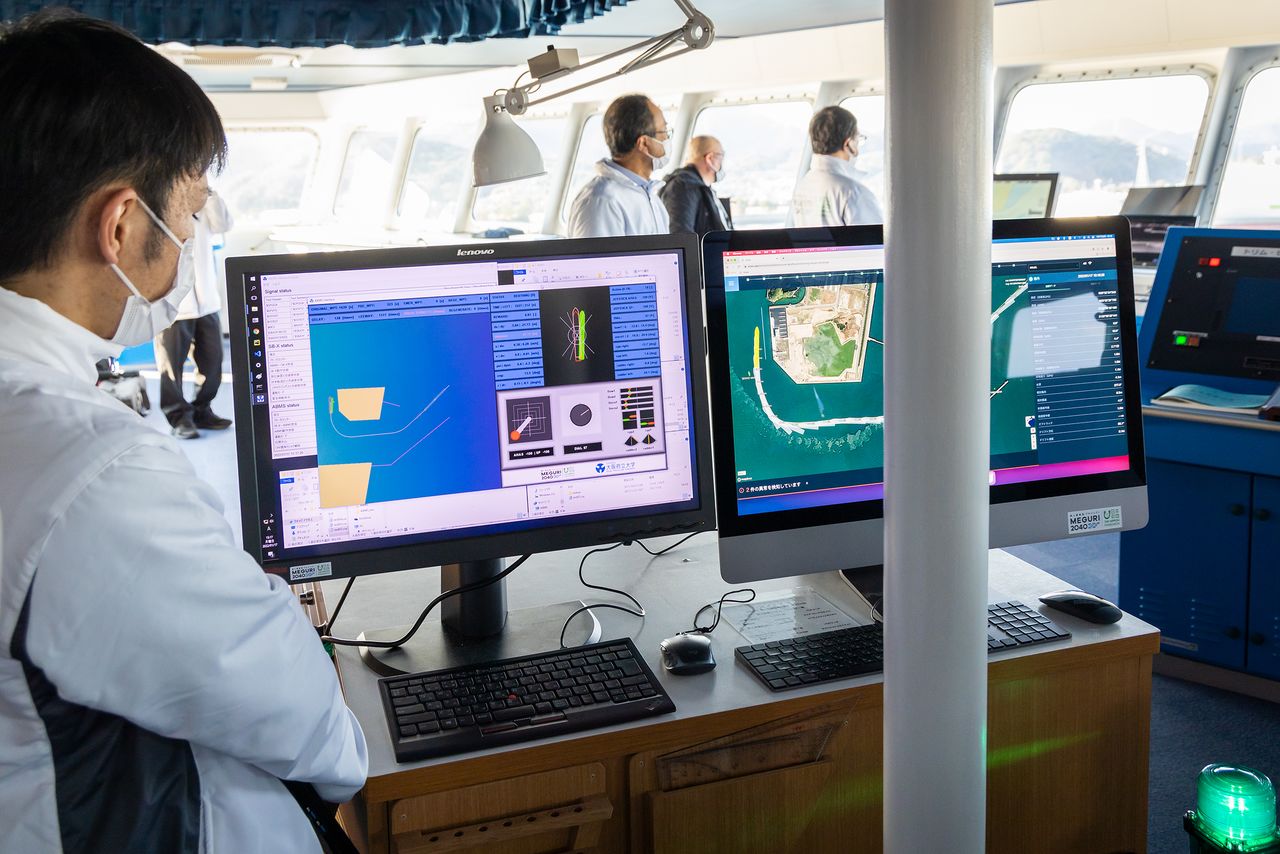 The automated berthing system interface (left) provides a visual display of the instructions issued by the ship’s AI. A navigation system shows the ship’s position in real time.

At a press conference after the voyage, Nippon Foundation Executive Director Unno Mitsuyuki explained the significance of the project: “As a result of population decline, the average mariner is now older and more overworked. Eighty percent of maritime accidents are the result of human error. Autonomous ships are one solution to this problem.”

Meguri 2040 involved the creation of five different consortiums encompassing around 50 corporations and organizations in all. The project has already pulled off a successful trial of a small autonomous sightseeing vessel in Yokosuka, and there are plans for autonomous voyages by commercial container ships and amphibious vehicles, some in the busy Tokyo Bay area, before the end of the current fiscal year. Investment in the project to date amounts to ¥8.8 billion, of which ¥7.4 billion came in the form of a Nippon Foundation grant.

“When individual companies attempt to develop these kind of technologies on their own, progress is slow and they struggle to compete internationally,” says Unno. “We believe Japanese industry should collaborate on this project as one team. We plan to use the outcome of the test voyage to lobby the International Maritime Organization to let Japan lead efforts to formulate international rules governing autonomous shipping.”

The project aims to make the first autonomous commercial voyages a reality by 2025, with 50% of coastal services to be autonomous by 2040. 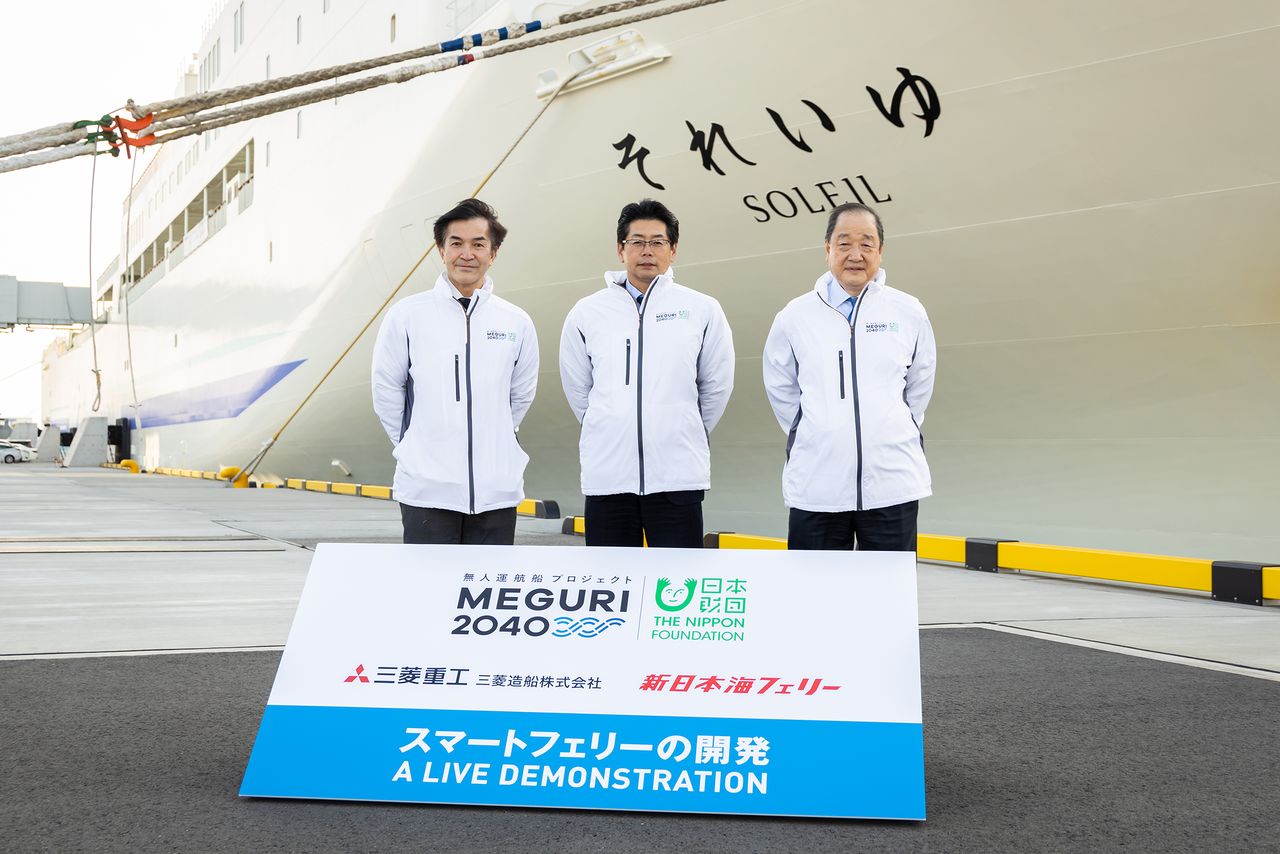 Interest in autonomous technologies tends to concentrate on cars and drones, but automation is set to bring about major changes in familiar forms of maritime transport as well. With around 400 inhabited islands, Japan is finding that the shortage of mariners is affecting essential services. Automation promises not only to resolve this issue, but also to boost both domestic and inbound tourism. The growth of water-based transport in urban areas will help reduce congestion and add vitality to the waterfront. 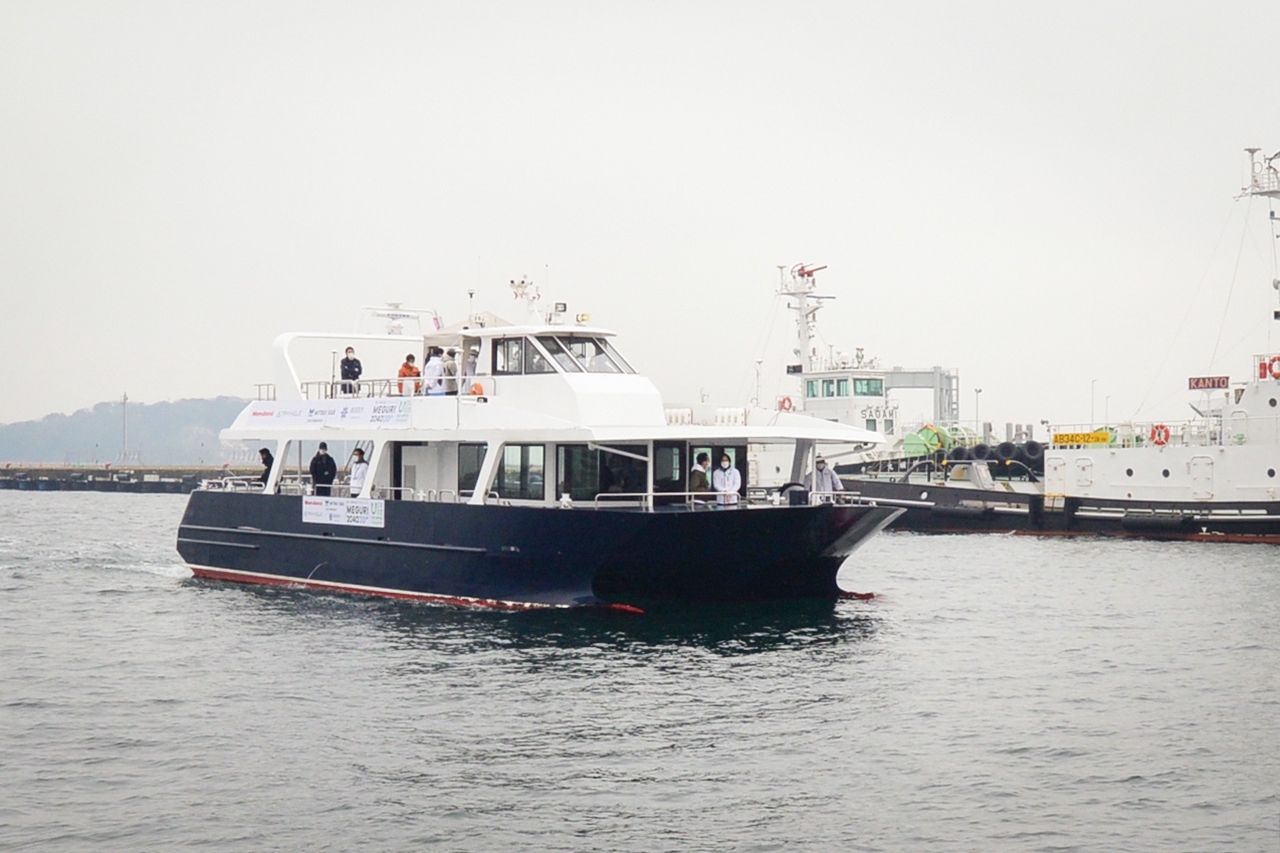 The Sea Friend Zero successfully completed an autonomous voyage between Shin-Mikasabashi and the island of Sarushima in Yokosuka, Kanagawa, on January 11. (Courtesy the Nippon Foundation) 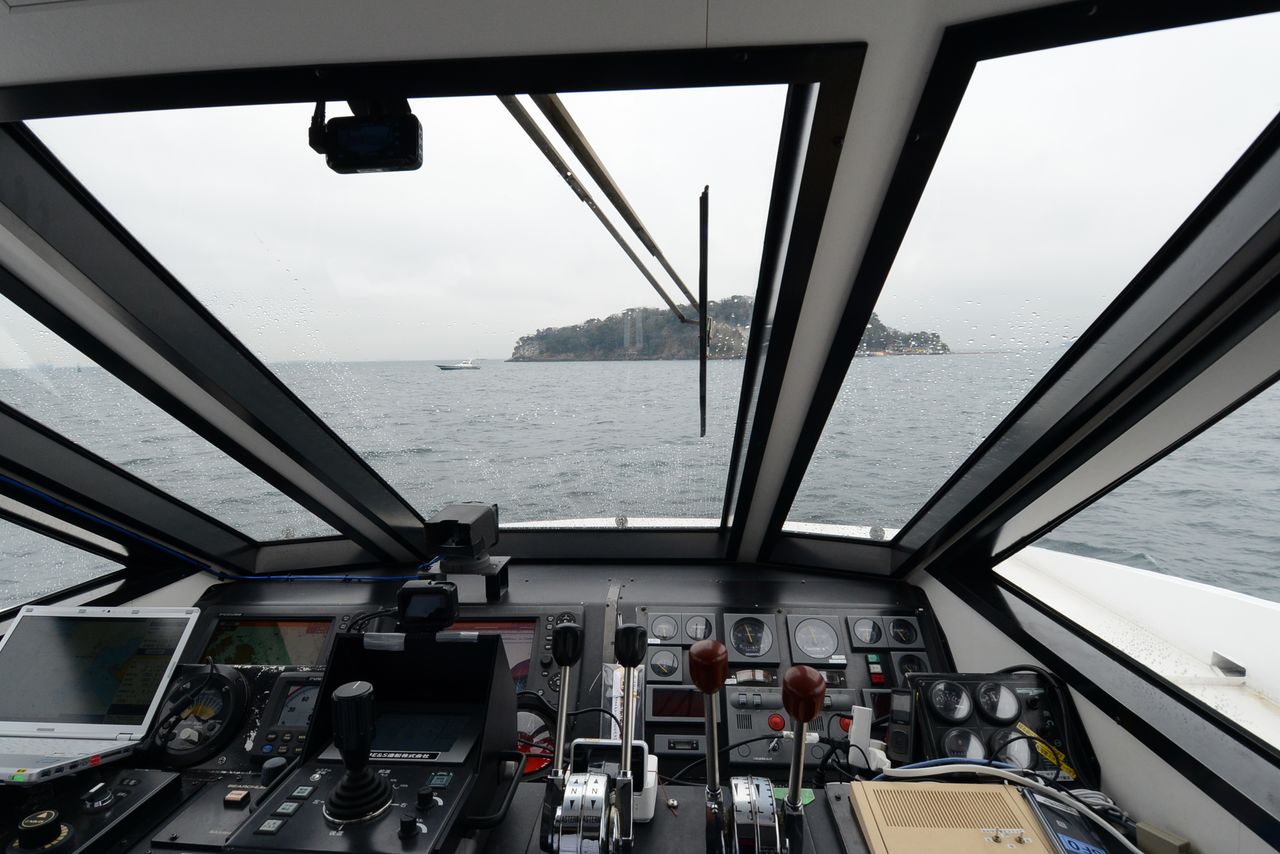 During the voyage, throttles and other controls on the bridge move by themselves. (Courtesy the Nippon Foundation)

As the shipping and marine transport industries diversify and pursue further efficiencies, the transition to autonomous shipping will have a significant economic effect on the shipbuilding and dockside industries. The Nippon Foundation projects that the economic benefits of automation will exceed ¥1 trillion by 2040. In response to those who say mariners will lose their jobs, it should be noted that autonomous vessels will still need to be monitored remotely, and that the significant economic benefits the vessels bring will likely result in the creation of new jobs. Chief engineer Mori Hideo says while we have only just begun our climb to achieving the goal of autonomous shipping, “now that we are at the stage of real-world testing, we can at last see the peak of the mountain. To use a Mount Fuji reference, I guess we have reached the fifth station—about half-way up—on the way to the top.”

Remote monitoring systems present many challenges, including the need to recover from malfunctions and the threat of cyberattacks. In addition to the need to refine the technology, there is also a need for legislation and international standards to govern autonomous shipping. Unno gave his outlook for the future of Meguri 2040:

“This year marks a milestone in the testing process. We are now going to start working seriously on the establishment of a legal framework and accident-response protocols for autonomous vessels. We’re 50 percent of the way to our goal, and as we work to get to 60 or 70 percent, we also need to consider whether to support the commercialization efforts of the respective consortiums or to consolidate the strengths of the various members into one,” says Unno. 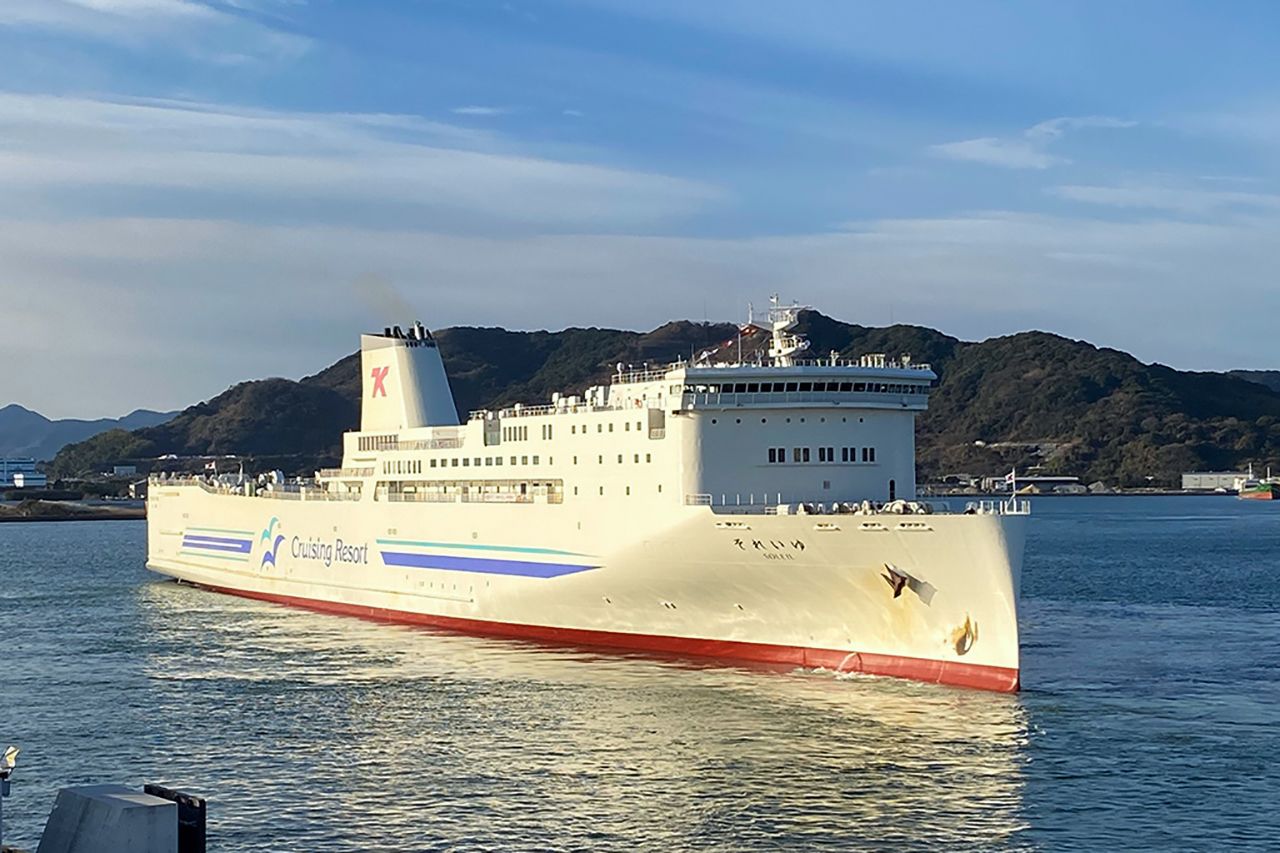 The Soleil returns to dock after its seven-hour test voyage. (Courtesy the Nippon Foundation) 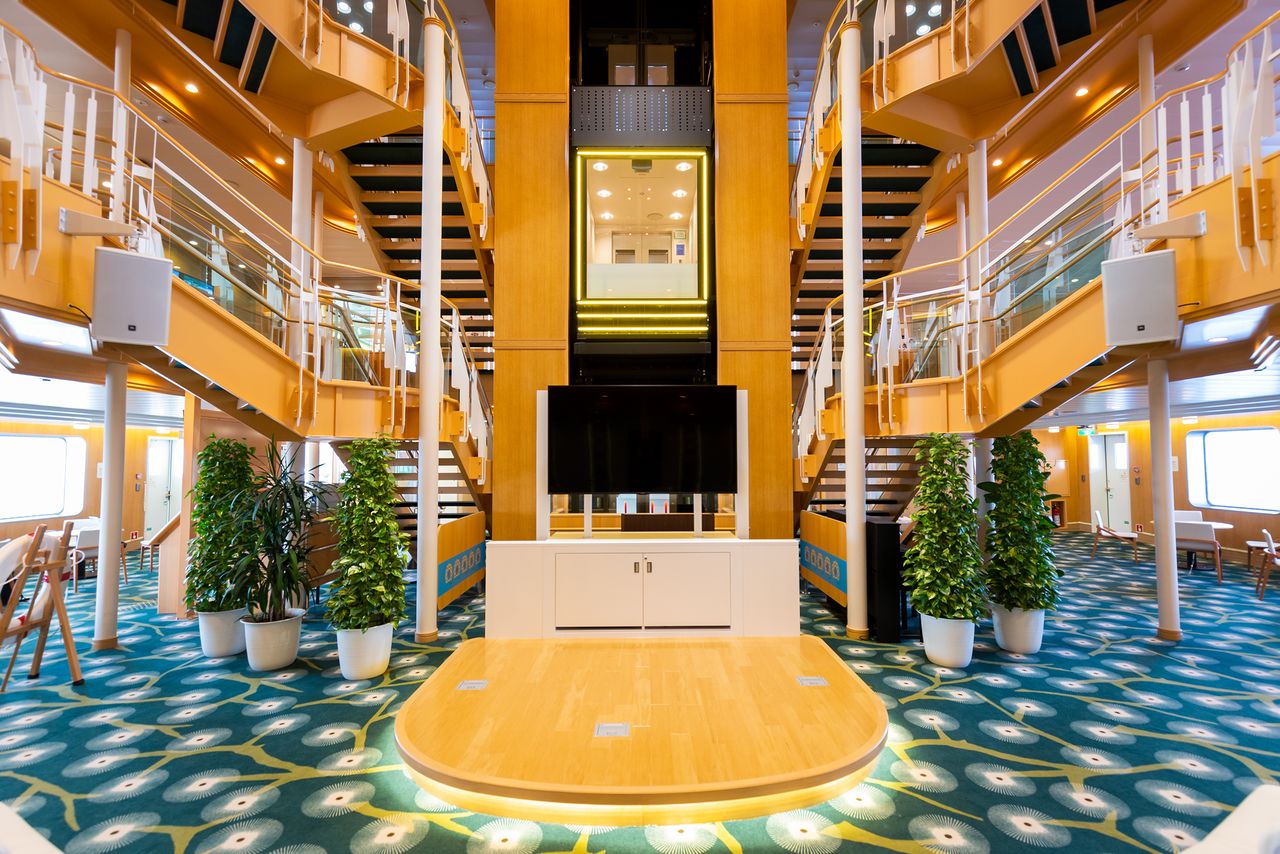 The grand entrance hall of the Soleil. Automation looks set to make maritime travel a bigger part of our lives.