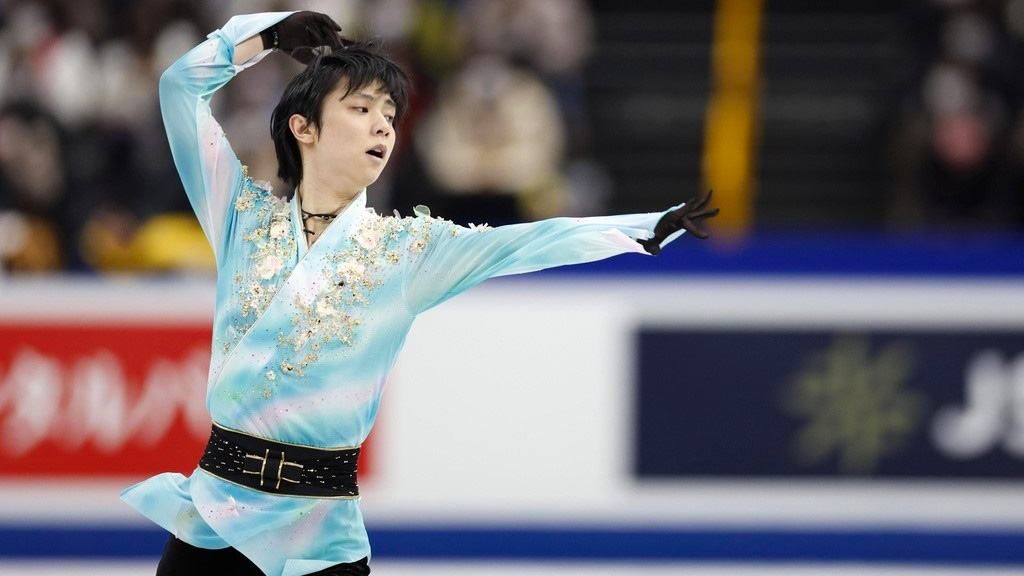 Sports Feb 7, 2022
Two-time Olympic gold medalist Hanyū Yuzuru heads into the 2022 Beijing Winter Olympics under a cloud of doubt as to whether he can recover fully from his recent ankle injury. With his December 2021 victory in the Japanese national championships he reclaimed his position as Japan’s top skater, but questions remain about his ability to stick his quadruple axel in competition and win his third Olympic gold medal.

An Answer to Fans’ Questions

On December 26, 2021, Japanese figure-skating superstar Hanyū Yuzuru stepped up with a performance on the ice that showed why he remains the top male skater in Japanese history, securing his third straight berth on Japan’s Olympic skating squad. Now that he is headed to the rink in Beijing, it seems time to look back on the career of this Japanese champion.

Let’s go back to the 2010–11 season. Hanyū, then just a high school freshman, was making his move from the junior to the senior division of the Japanese skating ranks. He had already made his global mark, coming in second in the Four Continents Figure Skating Championships, but his sheer physical prowess had already given him a name—he had stuck a quadruple toe-loop in competition and was known for his triple axel jumps, but was also recognized for his artistic moves, including an Ina Bauer arch that marked him as something special among the men’s competitors. More than a decade ago, all eyes were on Hanyū as a likely leader of the future of the sport.

He was quick to follow up on these expectations. In the 2011–12 season he won the Rostelecom Cup in the International Skating Union’s Grand Prix series, gaining a spot on Japan’s national team from that year onward. At the 2012 World Championships he took third overall, after beating all his teammates—including eventual second-place finisher Takahashi Daisuke—in the free-skate phase of the competition. 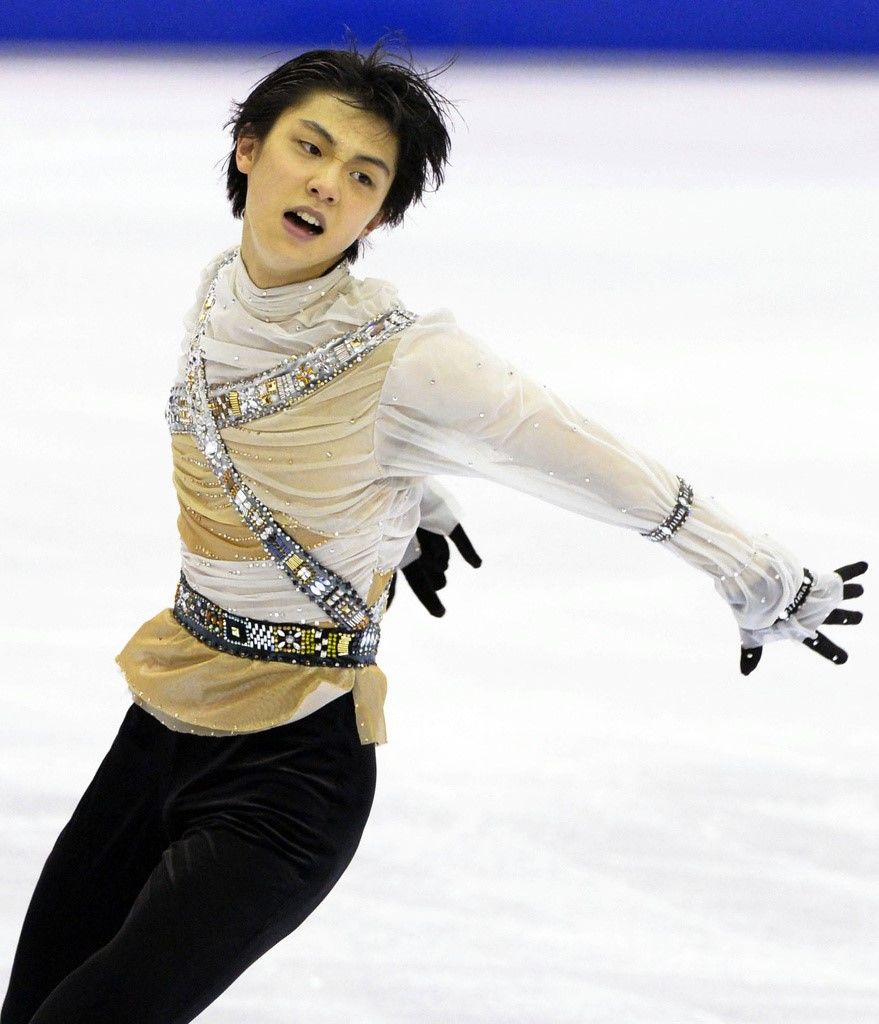 A 17-year-old Hanyū takes the bronze in his first-ever World Championships appearance. Taken on March 31, 2012, at Nice, France. (© Kyōdō)

What drove this Japanese skater to become the best ever? It was his desire to be better—to be the best he could possibly be in terms of all the skills he could bring to bear in each competition.

This is, of course, nothing unusual for a world-class skater. But he differed from his peers in the competitive field when it came to the strength of his dedication to this goal. Tsuzuki Shōichirō, one of the coaches who guided him in his youth, recalls Hanyū as one of the most driven skaters he ever worked with.

As he rose through the ranks, he learned new moves from the skaters above him, working rapidly to master them and go beyond what he had absorbed from the other competitors. His powerful competitive spirit pushed him not just to master their abilities, but more importantly, to go beyond any challenge he had set for himself as he polished his repertoire. At the 2012 World Championships, where he ended up taking the bronze, he injured himself during the short program and considered bowing out of the free-skate phrase of the competition. Convincing himself that this would be a defeat at his own hands, though, he skated the complete program—viewing it as a duty of any competitor representing the nation—and made it to the podium in the end.

Having gone on to register strong performances in a string of international competitions Hanyū made his first Olympic appearance at Sochi, Russia, in 2014. In the team skating event, he took part in the short program, where he beat his main opponents before bowing out and concentrating on the singles event. In the solo competition he became the first skater to score more than 100 points in the short program. His lead was strong enough that despite flubbing a jump in the free program he remained in front, taking home the gold medal.

He repeated his gold-medal performance at Pyeongchang, South Korea, in 2018, but this was a more dramatic victory than it sounds, given all that he went through in the runup to the global competition.

In November 2017, Hanyū took a bad fall during the NHK Trophy tournament in Japan, injuring a ligament in his right ankle. The situation was serious enough that he took a pass on the rest of the competitions that season, including the following month’s Grand Prix Final in Nagoya, which he had won every year since 2013. His Pyeongchang appearance would end up being his return to competition. 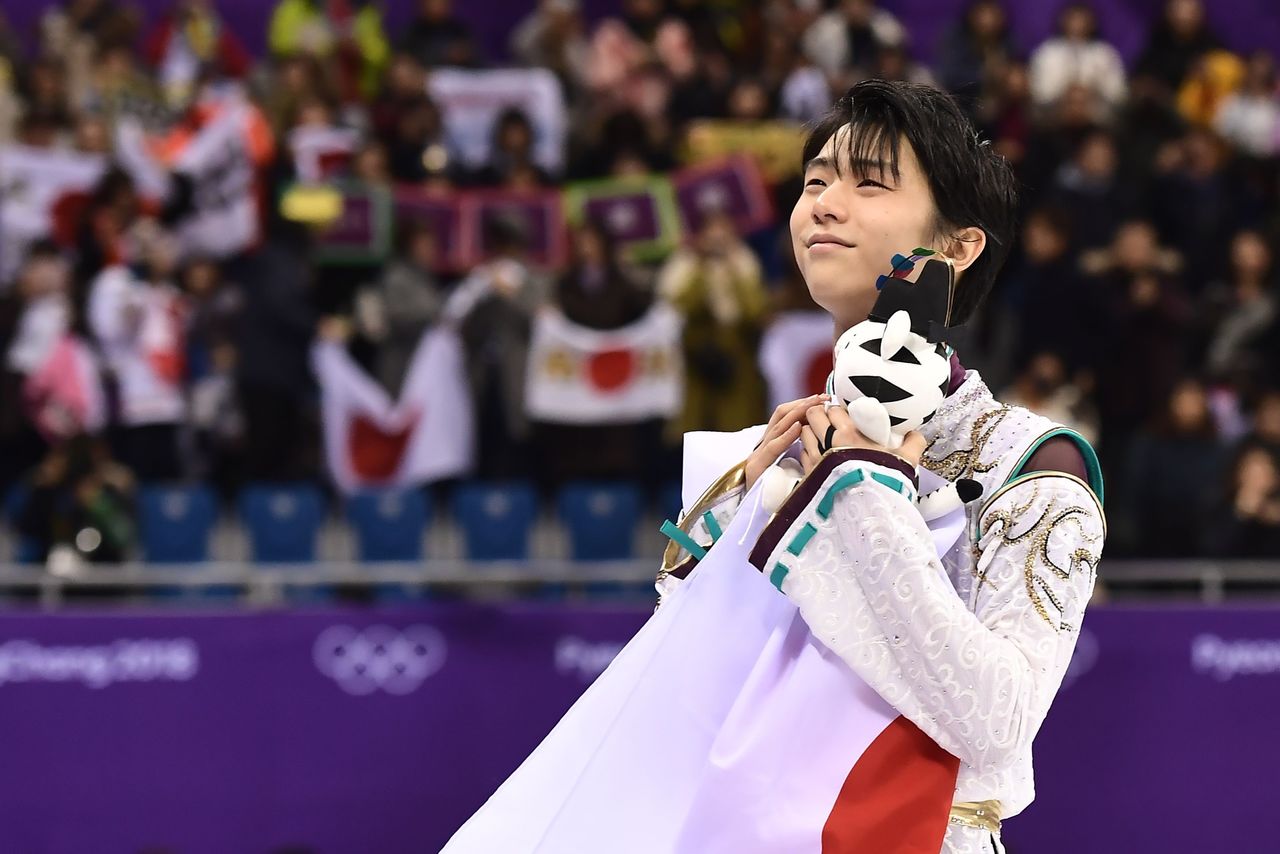 Despite his incomplete recovery from injury, Hanyū Yuzuru wins his second straight Olympic gold in the men’s singles competition at Pyeongchang, South Korea, on February 17, 2018. (© AFP/Jiji)

But there is more to Hanyū’s presence as a dominating skater than his record in competition. We must also look at what he has sought to accomplish on the rink in terms of his skills. During the 2016–17 season, for instance, he successfully landed the first-ever quadruple loop jump in international skating competition. In the next year, he also stuck a quadruple Lutz, the first such move since the US skater Brandon Mroz successfully landed one in competition in 2011.

All of this points to a skater who is constantly pushing his own abilities forward. Indeed, it is Hanyū’s drive to take his sport to new levels that has made him the most lauded athlete of his generation in the rink.

Why an Undisputed Champion Goes for the Quad

This year the Beijing Olympics will take place, and Hanyū will once again be there, striving to take his sport to new places. Ever since the Pyeongchang competition four years ago, he has sought to successfully land a quadruple axel jump. This is a supremely difficult move that has yet to be accomplished by any skater in competition; it is also a key source of motivation for the Japanese skater today.

Landing a jump like this is of course no easy matter even for a skater like Hanyū. It has taken him countless hours of practice to even be ready to attempt the move in an actual tournament. When he finally made it a part of the program he skated at the Japan Figure Skating Championships in Saitama in December 2021, though, he made it clear that he had taken his skills to a level where this previously impossible move was within his reach.

Attempting something so challenging in a competition like the Olympics is highly risky, of course. A fall will mean a significant docking of points, likely dropping him from gold medal contention. But Hanyū is determined to attempt that leap. This determination, indeed, has been the primary driver of all of his work since his repeat gold medal at Pyeongchang four years ago. 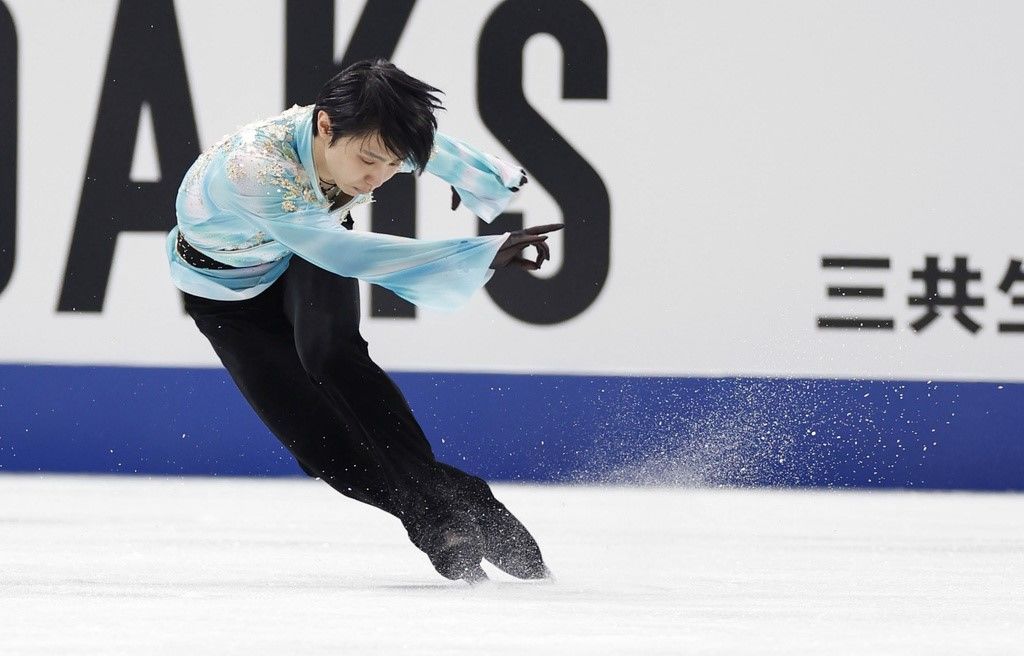 Hanyū Yuzuru hits the ice after failing to complete his quadruple axel at the Japan Figure Skating Championships on December 26, 2021, at Saitama Super Arena in Saitama Prefecture. (© Kyōdō)

And Hanyū does not see this as a goal he wants to achieve for himself alone. “This is everyone’s dream,” he says. “It’s a dream that all these people have entrusted me with. So it’s something I want to achieve for all of them, too.” The quad axel is something he wants to do as a skater, of course, but also a responsibility he feels for his fans. This is why he intends to attempt it at Beijing.

Competition, though, always involves other competitors. One of the toughest Hanyū faces is the American skater Nathan Chen. Chen had a poor start at Pyeongchang, struggling to finish in seventeenth place in the short program skating; he stormed back in the free program to end up in fifth place overall, though, and maintained his strong output after the 2018 Games, winning the World Championships in March of that year (a tournament that Hanyū skipped) and going on to rack up numerous victories in the international competitions that followed.

Chen’s hot streak lasted up through 2021, when he finished third at the October Skate America tournament, the first round of the 2021–22 international season. He rebounded at the end of that month, though, with a decisive victory at the Skate Canada International competition. In January 2022 he followed this up with his sixth straight win at the US Figure Skating Championships, where he maintained a comfortable lead despite some mistakes in his performances. His free-skating program, including five quadruple jumps, ranks him alongside Hanyū as one of the world’s top leapers, and a key rival for the Japanese skater.

Early in the current season, Hanyū, hampered by injury, was seriously considering sitting out the Beijing Games. With his resounding win at the December 2021 Japan Figure Skating Championships, though, he made it clear that he was back on the ice. All eyes are now on him to see whether he can make his way from that ice to the top of the medals podium for his third straight Olympics.