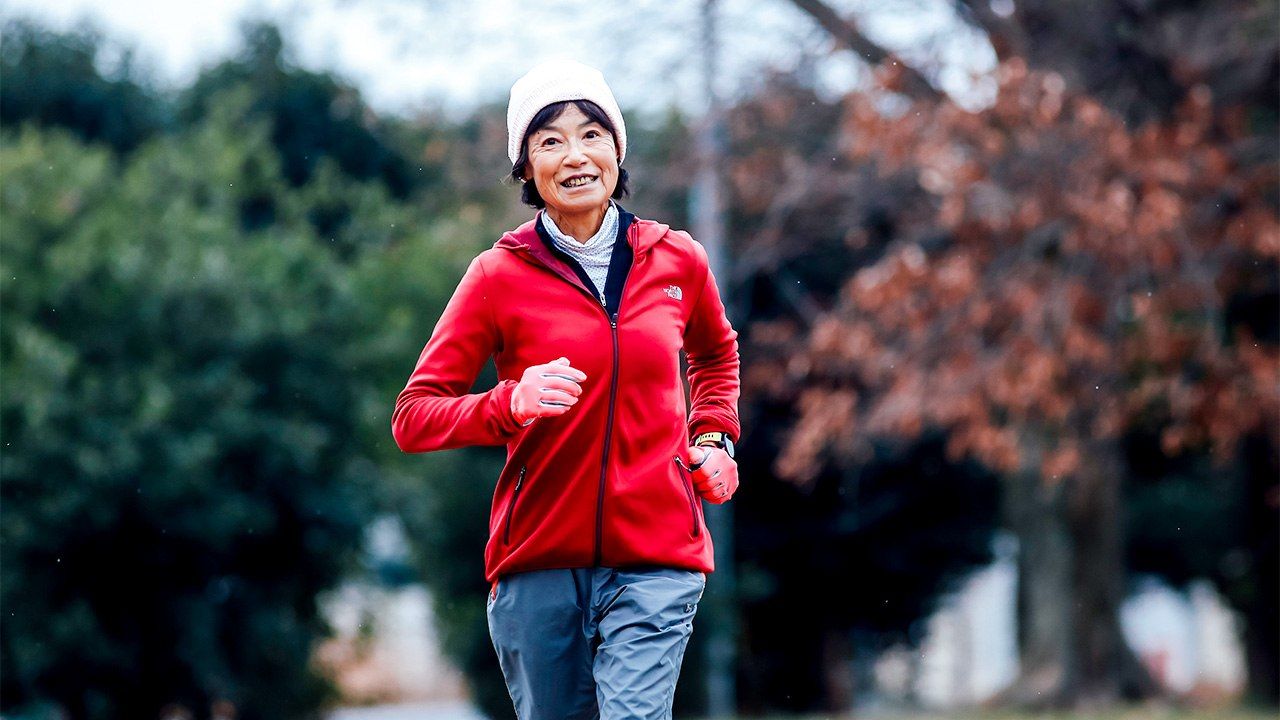 Sports People Mar 22, 2022
Japanese marathoner Yugeta Mariko is in her sixties, but is racing faster than she ever has. She holds the world record for the marathon in the women’s 60- to 64-year-old category, and is the first in that group to break the three-hour mark. The master runner talks about what keeps her going at an age when others are thinking of slowing down. 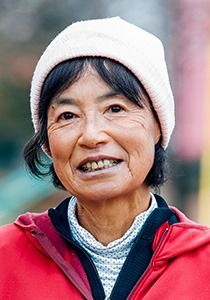 High school teacher. Marathon and 10,000 meters world record holder, (women, 60–64 age group). Born in 1958 in Hannō, Saitama Prefecture. Competed at the national level in middle-distance events in high school and university. She ran her first marathon, the 1982 Tokyo International Women’s Marathon, at 24, finishing in a time of 3:09:21. After raising a family, she returned to the marathon, and in 2019 she became the first woman in her sixties to run a sub-3-hour race, finishing the Shimonoseki Kaikyō Marathon in 2:59:15. She bested her own world record at the 2021 Osaka International Women’s Marathon with a time of 2:52:13.

Running Down a Dream

In her sixties, Yugeta Mariko has achieved the holy grail of Japanese amateur marathoners: a sub-3-hour time. According to Japanese running portal Runnet, only a fraction of racers—both men and women of any age—finish a marathon in under three hours. Yugeta, a native of Saitama Prefecture, is the only female sexagenarian on the planet to have achieved the mark, not just once, but multiple times. She currently holds the women’s world record for 60‒64-year-olds with the blistering time of 2:52:13, which she set at the age of 62 at the 2021 Osaka International Women’s Marathon.

Yugeta is a life-long runner. As a student, she competed in middle-distance events, including earning a berth in the national high school championships in the 800 meters. She later switched to the marathon, making her debut at 24 with a time of 3:09:21. She set her sights on breaking the three-hour mark, but the road to the sub-3 stretched out farther than she ever imagined.

Not long after she took up the marathon, she married, and soon training took a back seat to her domestic duties. “I wed at 25 and had my oldest son a year later,” Yugeta recounts. She was 37 by the time her fourth and final child arrived. Even though parenting took up most of her time, she insists that she never gave up on her dream of running a sub-3-hour marathon. Although her options for training were limited, she was determined to stay active. As a high school teacher, she ran with the members of the athletics club and did push-ups and sit-ups when time allowed.

She returned to road running just shy of her fortieth birthday, but she would have to wait until her children were older to mount a serious challenge on the sub-3. In 2009 at the age of 51, she came close to the mark at the Nagoya Women’s Marathon, finishing in just under 3 hours, 6 minutes. Once her youngest child entered high school, she devoted more time to training, including joining an athletics club in nearby Tokyo. She continued to whittle away at her time until at the age of 58, she at long last succeeded in breaking the three-hour barrier.

Yugeta savored her accomplishment, but a comment from one of her students opened her eyes to the fact that it might be more than just a personal best. “They joked that a sub-3 at my age must be a world record or something,” she recounts with a smile. “When I looked into it, though, I was surprised to find that no women in her sixties had achieved the feat. I thought that if I could maintain my time over the next two years, I could claim the record. It really motivated me.” 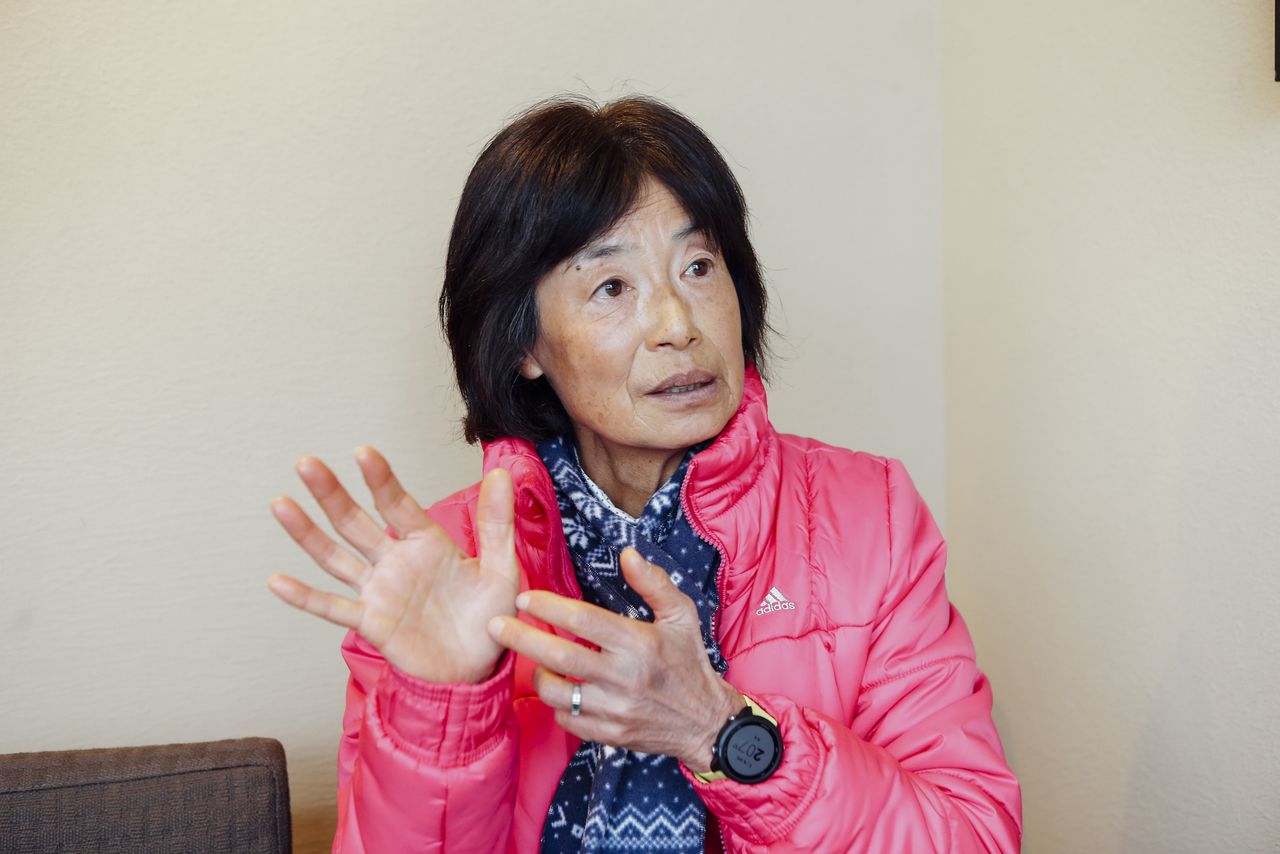 Yugeta Mariko. Her success in the marathon has made her something of a celebrity among her fellow amateur racers.

Yugeta is a prolific racer. She has run in all three of Japan’s major marathons for women—Nagoya, Osaka, and Tokyo—and has participated in scores of regional events. She has completed over 100 races in all, and shows no sign of slowing her pace. Key to her vitality—and what keeps her running sub-3-hour marathons—is her well-rounded approach to training that combines regular running, plenty of sleep, and a balanced diet. 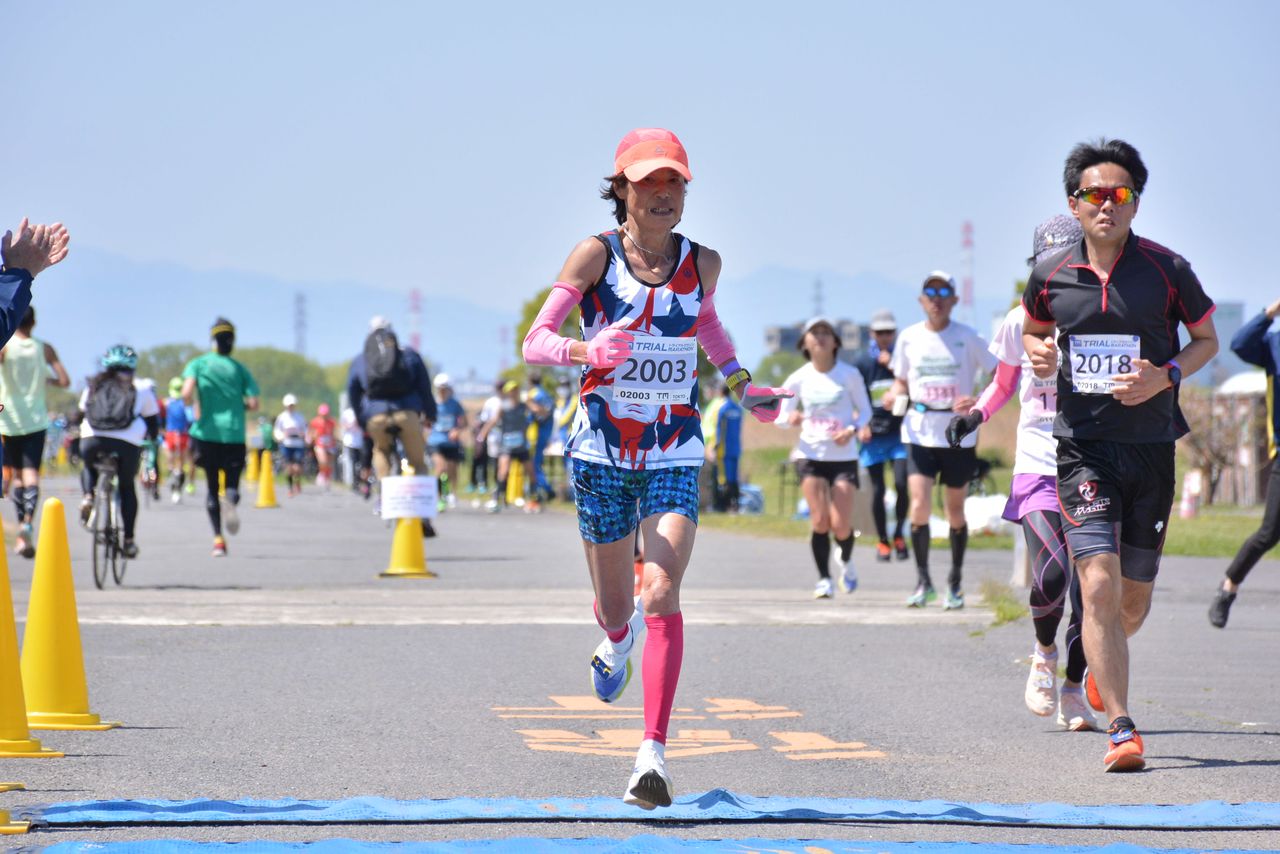 Yugeta teaches physical education three days a week at her alma mater, Kawagoe Girl’s High School, but still manages to run an eye-popping 600 to 800 kilometers a month. “You have to keep up the mileage to run marathons,” she asserts. She cleverly combines her training with her teaching duties to maintain her daily average of 25 kilometers. “On days I’m at school, I put in some 15 kilometers with members of the athletics club. Then after the kids are finished, I do laps around the sports ground to make up the difference.” On the other four days, she runs in the nearby hills, or heads to the school to join the afternoon club practice.

Asked about resting, Yugeta, without missing a beat, declares that she runs every day, come rain, sun, or snow. “Marathons aren’t canceled because of the weather,” she points out. She says that the only time she hit the pause button was when a large typhoon struck where she lives, but only then at the insistence of her family. “I was about to head out when they stopped me.”

To sustain her running regime, Yugeta makes certain she eats right and gets enough sleep to allow her body to recover fully. “The most important thing is to foster healthy habits,” she says. “I make sure I get eight hours of sleep a night and eat things like chicken, raw tuna, tōfu, eggs, and milk to give my body the protein it needs.” She cooks simple, nutritious meals that include locally grown produce, often from her neighbors’ gardens, and makes sure to stay away from alcohol. “I loved beer when I was younger, but since my fourth child, I’ve pretty much been a teetotaler.”

Although Yugeta boasts an ageless fortitude, she stresses that it took great patience and hard work to get where she is today. Starting in her late fifties, the wear and tear on her body began catching up with her. She has suffered a string of ailments, including neuralgia in her lower back, Achilles tendinitis, and painful jogger’s heel. Her appetite has also declined, forcing her to pay more attention to nutrition.

She is persistent if nothing else, though, and rather than dwell on her health woes, she makes it her goal to overcome them. “At my age, injuries and the like are just things you have to deal with,” she says matter-of-factly. Depending on the ailment, Yugeta might visit a chiropractor or try out an herbal remedy, but the aim remains the same: to get over it. “To succeed, you have to face each challenge head on. You can do anything if you put your mind to it.”

Such statements, however, make Yugeta sound more stoic than she actually is. When asked if she ever tires of training every day, she flashes a smile and states cheerfully that “the thought never crossed my mind.”

When pressed about what it is she loves about running, though, Yugeta struggles for an answer. “It’s such a part of life now that I really can’t quantify it. I just have an urge to keep going.” She says that when she watches young runners battling it out on TV, she gets an itch to lace on her shoes and start pounding the pavement. Working with high school students also invigorates her. “I feed off the energy. It’s the best.”

Having achieved a sub-3-hour marathon, Yugeta’s next goal is to finish in under 2 hours, 50 minutes. However, she insists she would be just as happy to be able to continue running for the rest of her days. “I want to keep at it until the very end,” she says, grinning. “Although I can feel the effects of age, there are still things I can do to push myself forward.” This includes starting core training, which she admittedly dislikes. “I’m determined to pour my entire essence into the marathon so that when my time comes, I can say to my kids with confidence that I lived a full life.”

With luck, that day is still far off. In the meantime, Yugeta, with the support of her family and fellow runners, will continue training and competing, something that she is certain to enjoy every moment of.

(Originally published in Japanese. All photos by Yamamoto Raita unless otherwise noted.)