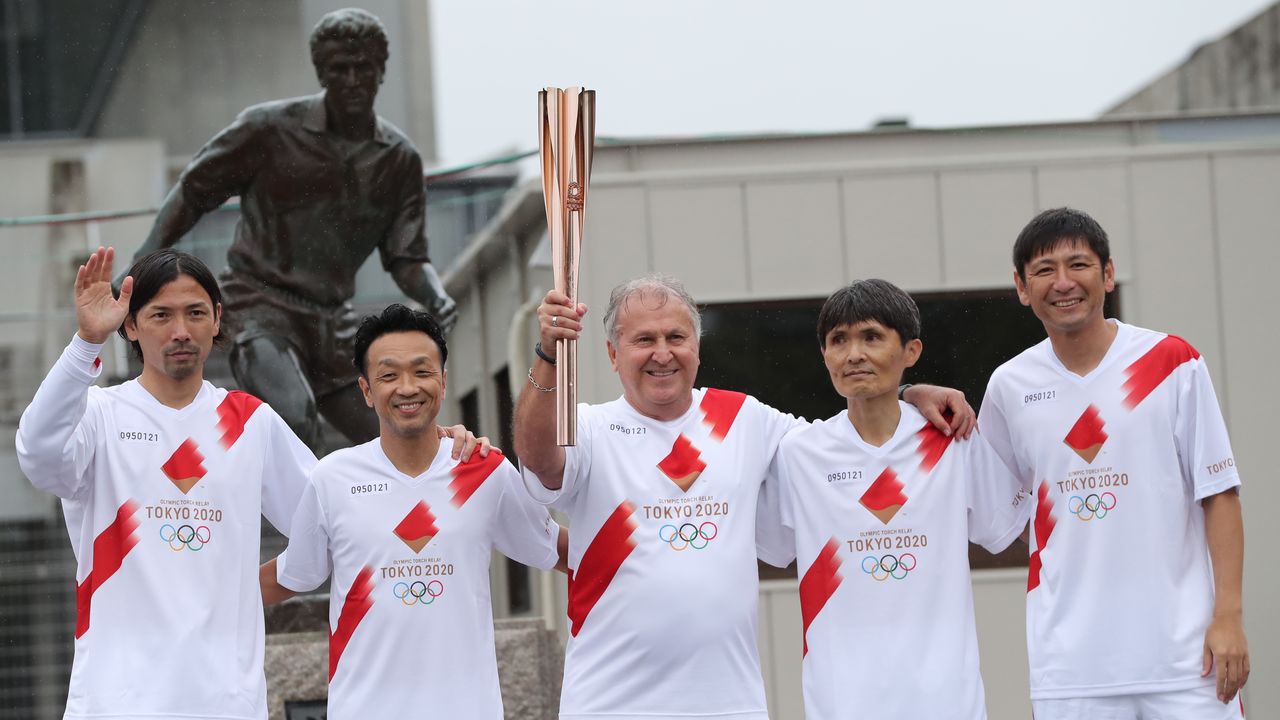 Sports People Apr 12, 2022
Zico has forged lasting bonds with Japan since first coming as a player in 1991. He played for and coached the J. League’s Kashima Antlers, where he now serves as an advisor, and managed Japan’s campaign at the 2006 FIFA World Cup in Germany. In this article, he shares his relationship with the city and country he calls his “second home.” 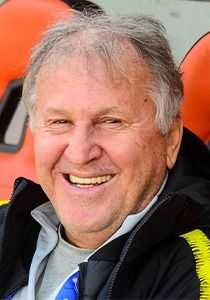 Club advisor for the J. League team Kashima Antlers. Born Arthur Antunes Coimbra in 1953 in Rio de Janeiro, Brazil. Started his professional career with Brazilian team Flamengo at 18 and would go on to win multiple domestic and international titles with the organization, including the Copa Libertadores and Toyota Cup in 1981. Played in three World Cups. Came to Japan in 1991, joining Sumitomo Metal Industries. Led the club, rebranded the Antlers in 1992, to a first-stage victory in the inaugural season of the J. League. Retired as a player in 1994. Has coached clubs in Turkey, Uzbekistan, Russia, and Greece, and briefly managed the Iraqi men’s national team. Has served several stints as Kashima’s technical director. Assumed his current post in 2022.

Brazilian soccer star Zico’s relationship with Japan first took root in the small industrial city of Kashima in Ibaraki Prefecture. After a stellar career playing for Brazilian powerhouse Flamengo and Italian side Udinese, in 1991, he flew halfway around the world to join the company team of Sumitomo Metal Industries. Two years later, with the launch of the J. League, the team was reborn as the Kashima Antlers, and Zico’s presence both on and off the pitch have been at the core of the club’s long-running success.

Perhaps most illustrative of Zico’s deep connection with Kashima are two bronze statues of the legend that stand in the city. One, erected in a local shopping center in 1994, adorns a space dubbed “Zico Square.” The other, put up in 1996, graces the grounds of a municipal sports center adjoining Kashima Soccer Stadium, the home ground of the Antlers. Asked about the likenesses, Zico expresses nothing but gratitude: “The statues are tributes beyond my wildest dreams. I’m truly honored.”

Although Zico is quick to downplay his role, the Brazilian’s contribution to Kashima’s status as a powerhouse of Japanese professional soccer cannot be understated. “When the grand project was launched some 30 years ago to help revitalize the city through soccer,” Zico says, “I joined a hard-working, dedicated team that included coaches, players, and team staff, as well as club sponsors and members of the local community. I’m blessed that it was my image chosen for the statues. But they really symbolize the combined efforts of every individual involved.”

The first of the two statues, showing Zico posed with his right foot atop the ball and both hands on his hips, was commissioned secretly to commemorate the superstar’s retirement. He recalls attending a photo shoot that, unbeknown to him, yielded the image used for the statue. “The photographer had me stand this way and that,” Zico chuckles. As the session dragged on, his irritation started to bubble over. “I asked how much longer it was going to take, to which I was politely told to grin and bear it as it was a very important picture. What was I to do? I stuck it out.” 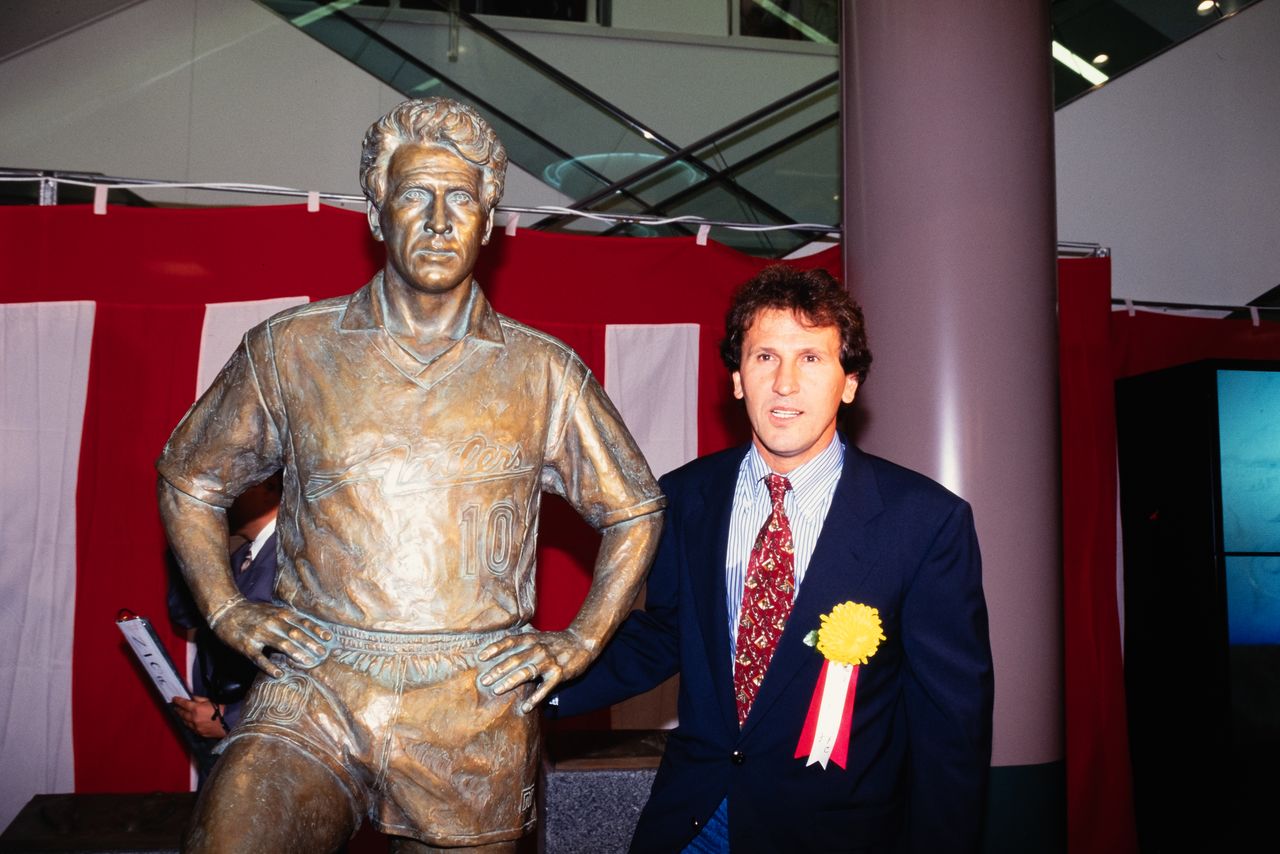 Zico poses next to his bronze likeness in October 1994 at an event commemorating his retirement as a player. (© Kashima Antlers)

The surprise unveiling came in October 1994. Zico had hung up his spikes that summer, and to honor him the club, sponsors, and others got together to hold a 10-day event, dubbed the “Zico Carnival.” The unveiling was the climax of the celebration and was attended by his mother Matilde and his five siblings, who had made the long journey from Brazil to be by his side. ”I had made so many memories in Japan. It was a very moving occasion,” recalls Zico. 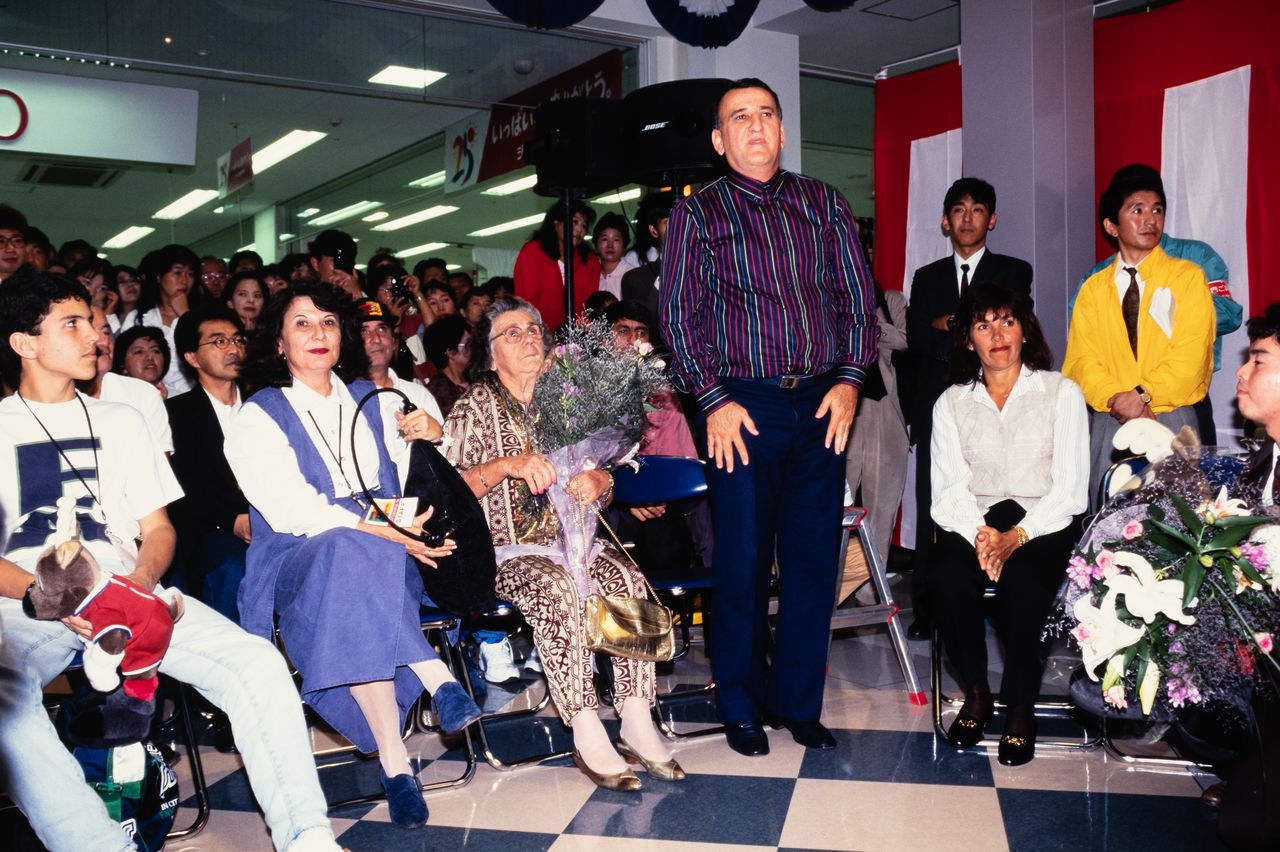 Zico’s family sit in the front row during the unveiling ceremony. (© Kashima Antlers)

The second Zico statue outside Kashima Stadium catches the legend mid-dribble, pushing the ball with the outside of his right foot as his eyes gaze downfield. It is a draw for Kashima fans—and even some supporters of opposing teams—who on game days can be seen posing for snapshots with the figure, a testament to the lasting respect and admiration for the Brazilian legend.

These are not the only statues of the star—two others stand on the other side of the globe, in Rio de Janeiro. One bronze image, depicting Zico connecting with the ball in a dramatic flying kick, is now installed at the Flamengo club headquarters; another decorates a Flamengo training facility. This artistic recognition of the celebrated kicker on both sides of the world is testament to his impact on the sport. 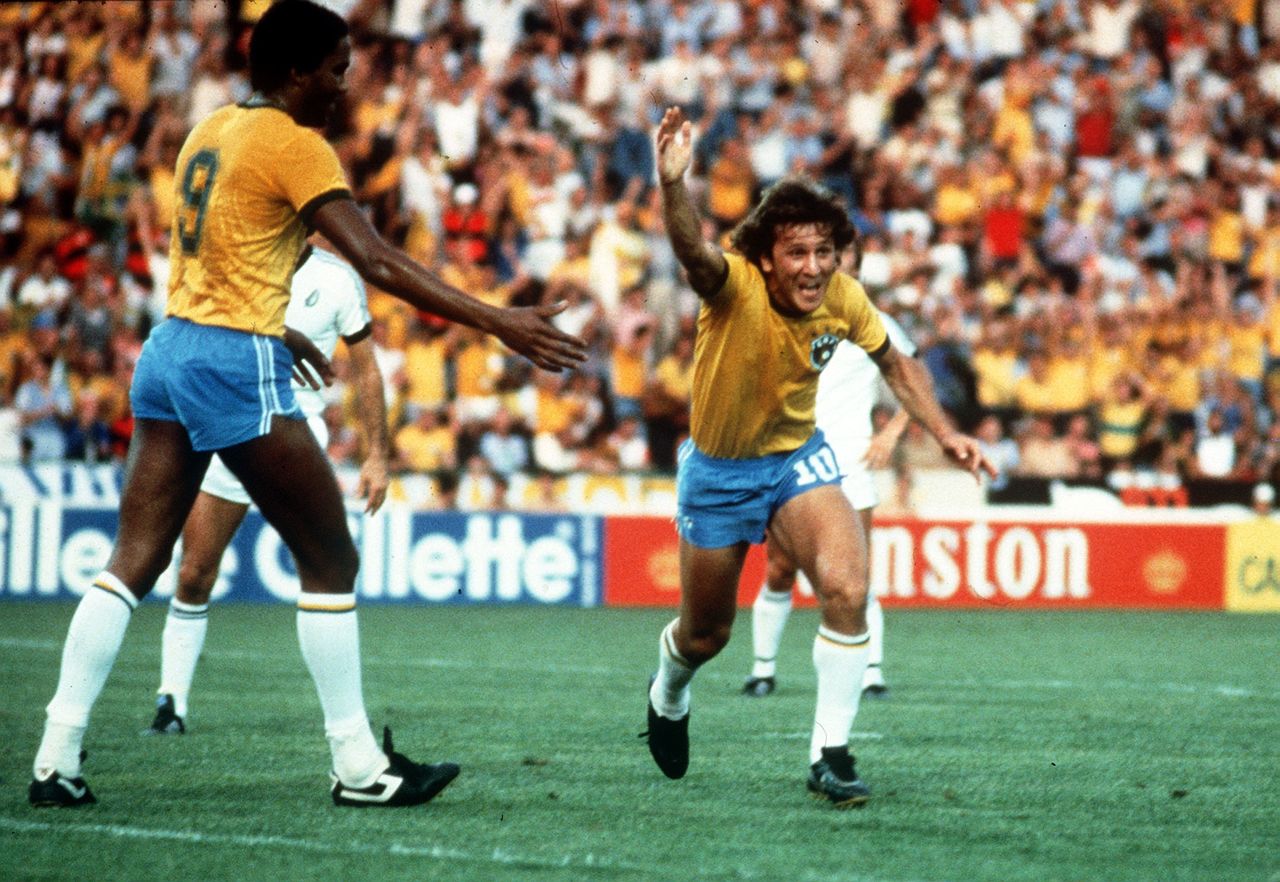 Zico celebrates scoring against New Zealand in a group-stage match on June 23, 1982, at the FIFA World Cup in Spain. (© Reuters/Action Images)

Kashima’s success in wooing one of the greatest soccer players ever to a small Ibaraki town with a second-tier team is nothing short of miraculous. Zico was retired and serving as Brazil’s first-ever minister of sports when Sumitomo Metals Industries offered him a three-year contract with its soccer club. Japan was on the verge of launching the J. League, its first professional league, and Sumitomo was one of 10 founding teams selected to participate. “It struck a chord with me,” Zico says. Much to the club’s delight, he accepted the proposal and flew to Japan in May 1991. 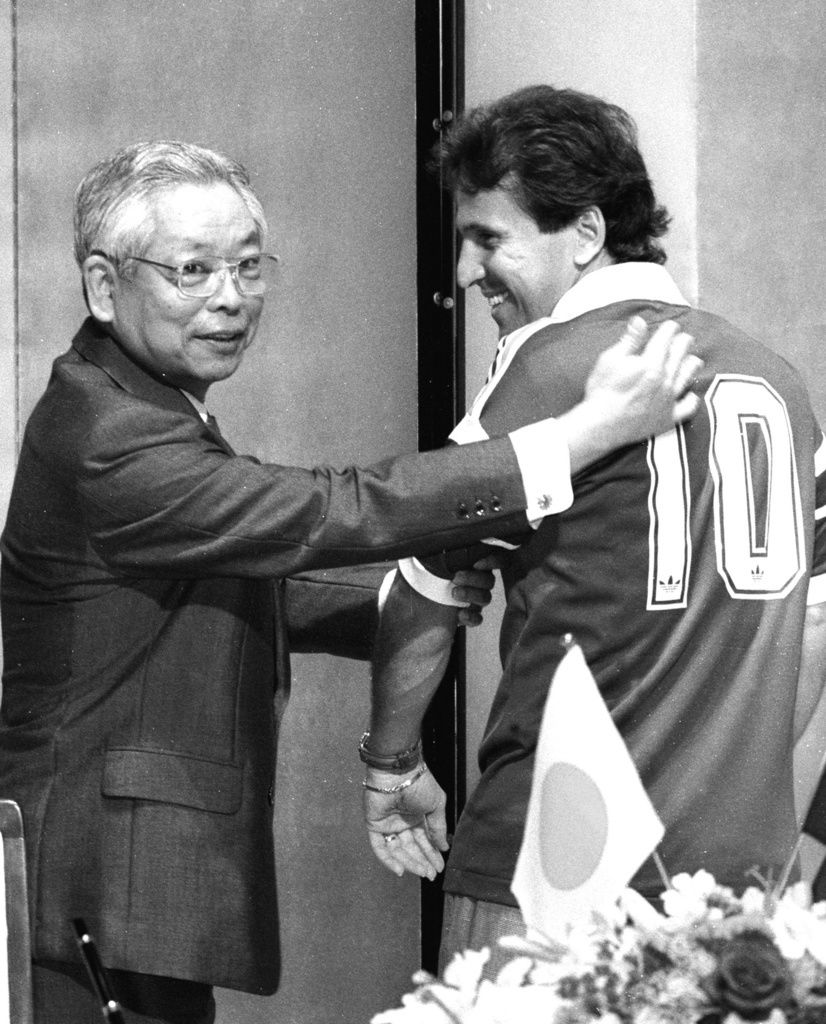 Zico is joined by Sumitomo Metal Industries president Shingū Yasuo as he displays his number 10 jersey at a press conference on May 21, 1991. (© Kyōdō)

At 38, Zico doubted if he would be of any use to the team as a player, but he was drawn by the ambitious aims of the project. “I thought that if anything, I could use my experience and knowledge of the sport to help the team build itself into a successful professional club,” he says. “It was a compelling challenge.”

Sumitomo laid the groundwork for its professional rebirth in Zico’s first two years. In July 1991, a public poll decided on Kashima Antlers as the club’s new name, and the following spring the team unveiled its logo and emblem. Construction also got underway on a new clubhouse and stadium.

Zico quickly stepped into a leadership role at Kashima, offering technical advice to his teammates on and off the pitch. Having competed at the highest levels of the sport, he knew that if the organization hoped to successfully transition from the amateur to professional ranks, it would first need to instill a winning mentality in players and staff. “A second- or third-place club may take comfort in a good season,” says Zico. “But history remembers the team that lifted the cup.” To build its legacy, Kashima needed to win titles.

Becoming a contender would take time, but Zico set Sumitomo solidly in that direction from the get-go. The team finished the 1991–92 season of the second division of the Japan Soccer League, the J. League’s predecessor, as runners up, and Zico claimed the golden boot with 21 goals. That same year, Sumitomo advanced to the semifinals of the inaugural J. League Cup.

Determined as ever to win, the 40-year-old Zico charged into the 1993 maiden season of the J. League. On May 16, he and his Antlers teammates took the field at a newly opened Kashima Stadium against a Nagoya Grampus Eight side that featured England international and 1986 World Cup top scorer Gary Lineker. Kashima dominated the contest, thrashing Nagoya 5–0, including a historic league-first hat trick by Zico. 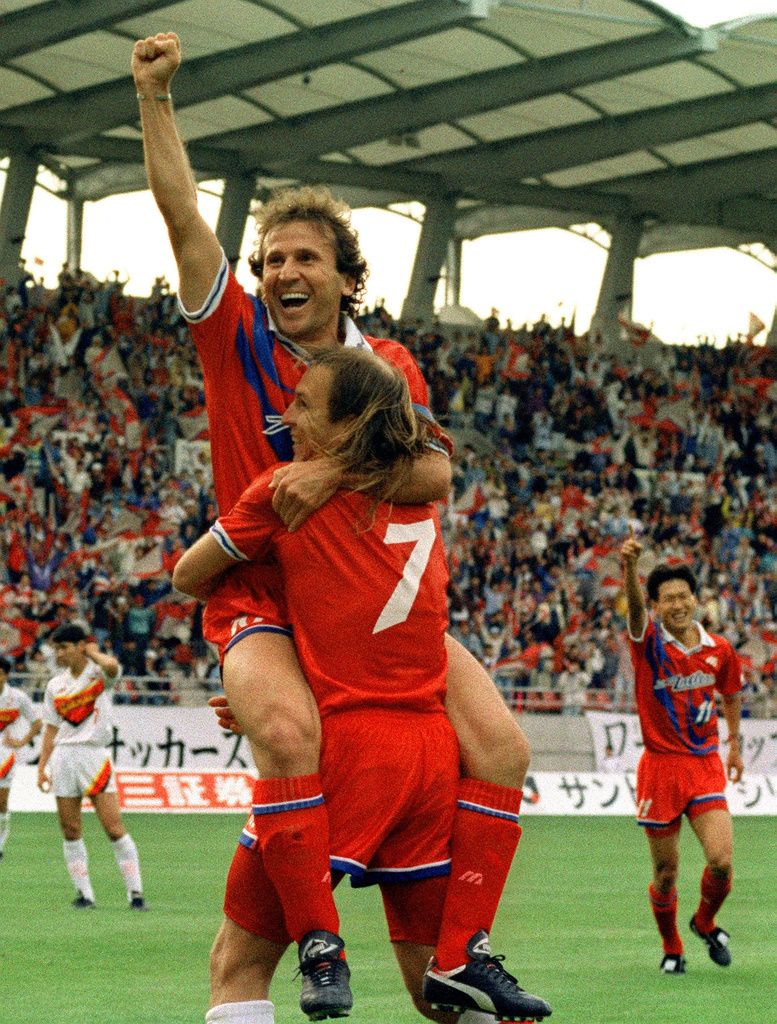 Thanks to robust interest among foreign media in Japan’s new league, the match was covered by numerous overseas outlets, and the news of Zico’s accomplishment quickly crossed the globe. 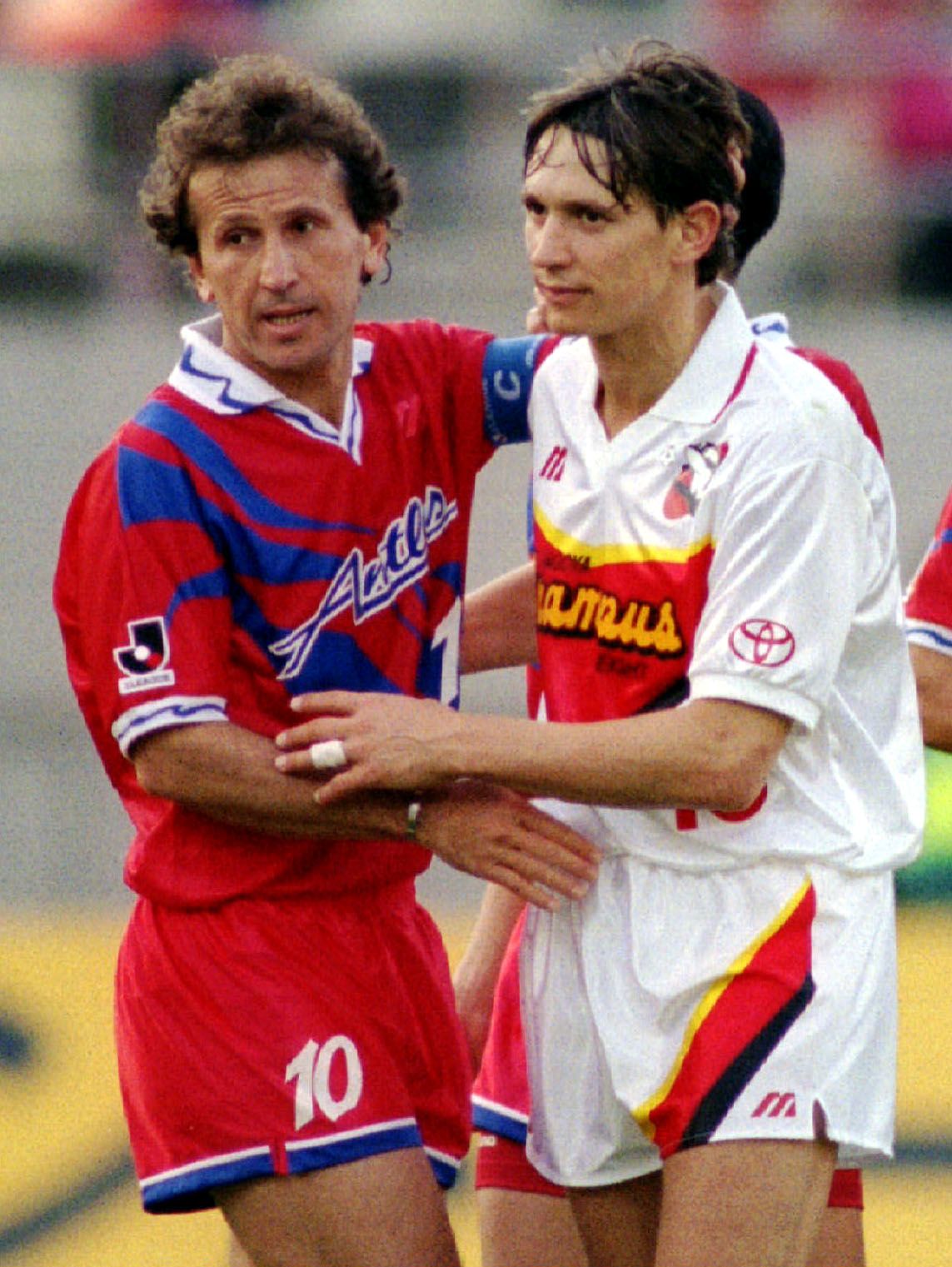 From this auspicious beginning, Kashima would go on to earn its first title, of sorts. The J. League started off following a split-season format, with the winners of each stage meeting in a two-game series to decide the overall champion. Although Zico was dogged by injuries that limited him to just three appearances, his presence spurred Kashima on to the first-stage title with two games remaining.

“We were a tight unit,” Zico says of the Antlers squad. “Just as a team should be.” His philosophy of always playing to win and other “Zicoisms” remain the backbone of Kashima soccer to this day.

The House that Zico Built

Zico looks back at his 30-year involvement at Kashima with a mixture of awe and gratitude. “I never imagined the relationship would be so long lasting,” he says. “It’s a rock-solid connection built on trust. Coming to Kashima has enriched my life immensely.”

The feeling is shared by the Antlers organization. Club advisor Suzuki Mitsuru, who was Kashima’s coach during Zico’s time as a player, says the Brazilian legend became the gold standard for professionalism in soccer. “He arrived committed to building Kashima into a championship team,” remarks Suzuki, adding that his passion for the sport permeated everything he did. “No matter what he was talking about, I made sure I took in everything he said.”

The longevity of the relationship owes much to Zico’s own affinity for Japan. While a player, he was known to make the long commute to team practices from his Tokyo home using public transportation. “It reminded me of my time playing with the junior team at Flamengo,” Zico chuckles. “I like riding the train and would have happily traveled all the way to Kashima by rail, but I had to switch to a highway bus at Tokyo Station for the second leg of the journey. Sometimes I would get stuck in rush hour traffic, but it was all part of the adventure of living in Japan.”

After retiring in 1994, Zico returned to Brazil for a stint. In 1996, he was back in Kashima, serving as the team’s technical director. That same year, the Antlers won their first league championship, and would go on to claim many more titles in the decades to come.

Zico’s success at Kashima eventually drew the attention of the Japan Football Association, and in 2002 he was tapped to be the men’s national team coach. During his tenure, he steered the team to its third Asian Cup Championship and third appearance in the World Cup finals, furthering his legacy and bolstering Japanese soccer.