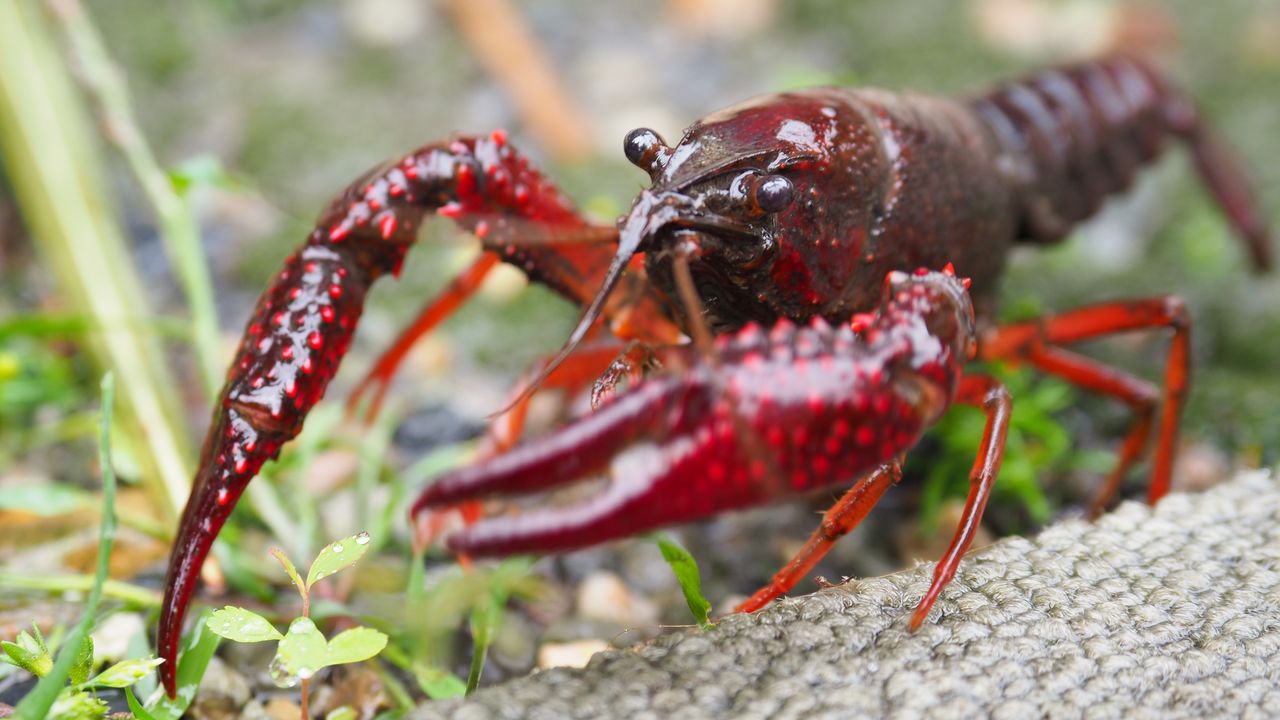 Will a Pest Designation Spell the End for the American Crayfish?

Lifestyle Environment Apr 7, 2022
To reduce the environmental impact of the American crayfish, which was introduced to Japan in the 1920s, the Japanese government may soon ban the importation, release, and commercial breeding and sale of the species. The author, a crayfish fishing enthusiast, explains the proposed restrictions.

Being a male in my fifties, I was taken aback by a piece of news that came out in January 2022 regarding the American crayfish, a creature whose popularity among Japanese children may be second only to the stag beetle. A report by the Central Environment Council recommended banning the species’ importation, release, and commercial breeding and sale, thereby putting it in the same category as the pond-slider species of turtle. The government has responded by scheduling the deliberation of an amendment to the Act on Invasive Alien Species for the current ordinary Diet session, an amendment that could be passed into law as early as spring 2023.

A part of life in Japan since before World War II, American crayfish have become a real threat to the ecosystem. Able to reproduce extremely quickly, crayfish not only deplete waterway-based insect populations, but also nibble and clip vegetation in which small fish and amphibians make their homes, reducing the plants’ water-purifying effects.

And yet, the government has thus far not listed American crayfish as an introduced pest, a measure that would result in the prohibition of the breeding, keeping, or transportation of the creatures, due to fears that such a move would trigger the large-scale release of the species into streams and ponds, further exacerbating the issue. Rather, the Type II restriction that is being proposed would see the creation of a new legislative framework that would make it possible to keep American crayfish as pets as well as gifting them to third parties.

Many readers would have been surprised to learn that there are plans to ban the release, commercial keeping, and sale of these creatures. I myself jumped to conclusions and assumed that I would no longer be able to go crayfish catching. When I made inquiries with the Ministry of the Environment, however, the member of staff I spoke to told me that substantive deliberation of the matter has not begun, saying dismissively that the Council’s report “did not go into much detail.” To avoid any further confusion, I will share here what I have found out so far. 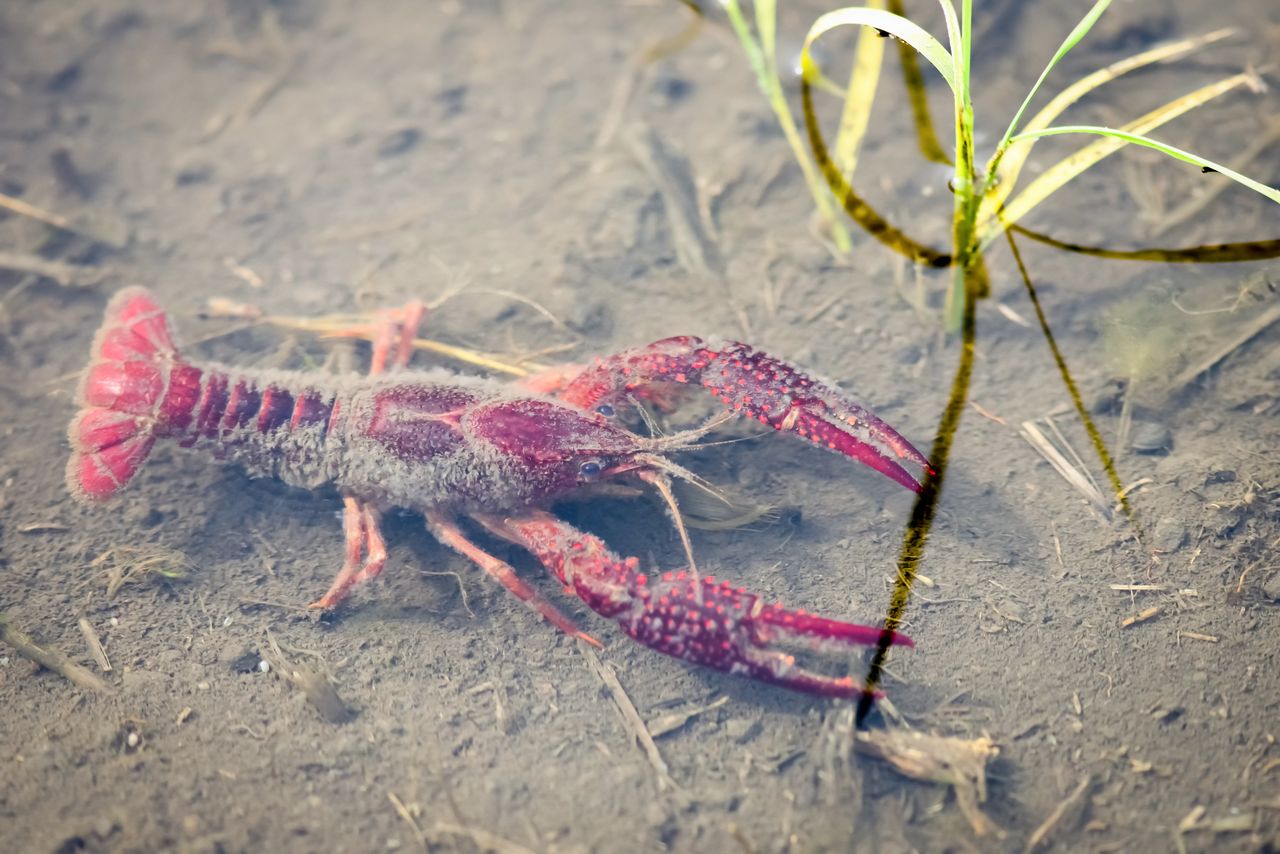 American crayfish chop up water plants with their pincers. (© Pixta)

Are the Days of Crayfish Catching Over?

In the Shōwa era (1926–89), crayfish catching was one of the most popular pastimes for Japanese children. All you had to do was tie a piece of squid, available from sweetshops, onto the end of a piece of string as bait and cast it into a pond or irrigation trench, and you could spend hours engrossed in fishing. Large in size and reddish black in color, the crustaceans were popular with children, and there was nothing like the excitement of getting a bite on the end of your line. Even now, one occasionally spots family groups trying to catch crayfish in ponds and parks. It’s always heartwarming to see a father triumphantly showing off his fishing skills to his kids.

You’ve probably had the experience of collecting a catch of crayfish in a bucket, only to throw it back. If the new rules end up prohibiting the release of crayfish into waterways, it raises the question whether those catching crayfish will we be required to take their spoils home with them. You often hear people say that they would not like crayfish for pets, prone as the species is to cannibalism and stinking in the summer. The nuisance to other passengers created by transporting crayfish on the train would make anyone reluctant to attempt this either. In fact, not being allowed to throw crayfish back would take all the fun out of catching them. All you need is some bait on the end of a stick. (© Pixta)

I made inquiries with the caretakers of several parks, most of them in Tokyo, about the status of crayfish catching. While some parks ban fishing outright, the precise rules vary from park to park. American crayfish hibernate in winter, so you will hardly see anyone fishing for them at this time of year. In fact, some park caretakers told me they do not get many crayfish fishers in summer either, despite that being the season in which crayfish are most active. One park told me it gets around 10 people trying to catch crayfish on a busy day, but that it bans the removal of living things from the park.

Prohibitions on both the removal and release of crayfish would effectively amount to a ban on all crayfish fishing. While the Ministry of the Environment staff member I spoke to told me that it was up to individual parks to make the rules, I also learned that while the proposal called for the prohibition of commercial breeding, it was unlikely to affect catch-and-release fishing, citing the fact that even the black bass (a listed pest) is not subject to an across-the-board ban on catch-and-release fishing. In other words, at parks and ponds that do not ban fishing per se, individuals can continue to enjoy crayfish catching. 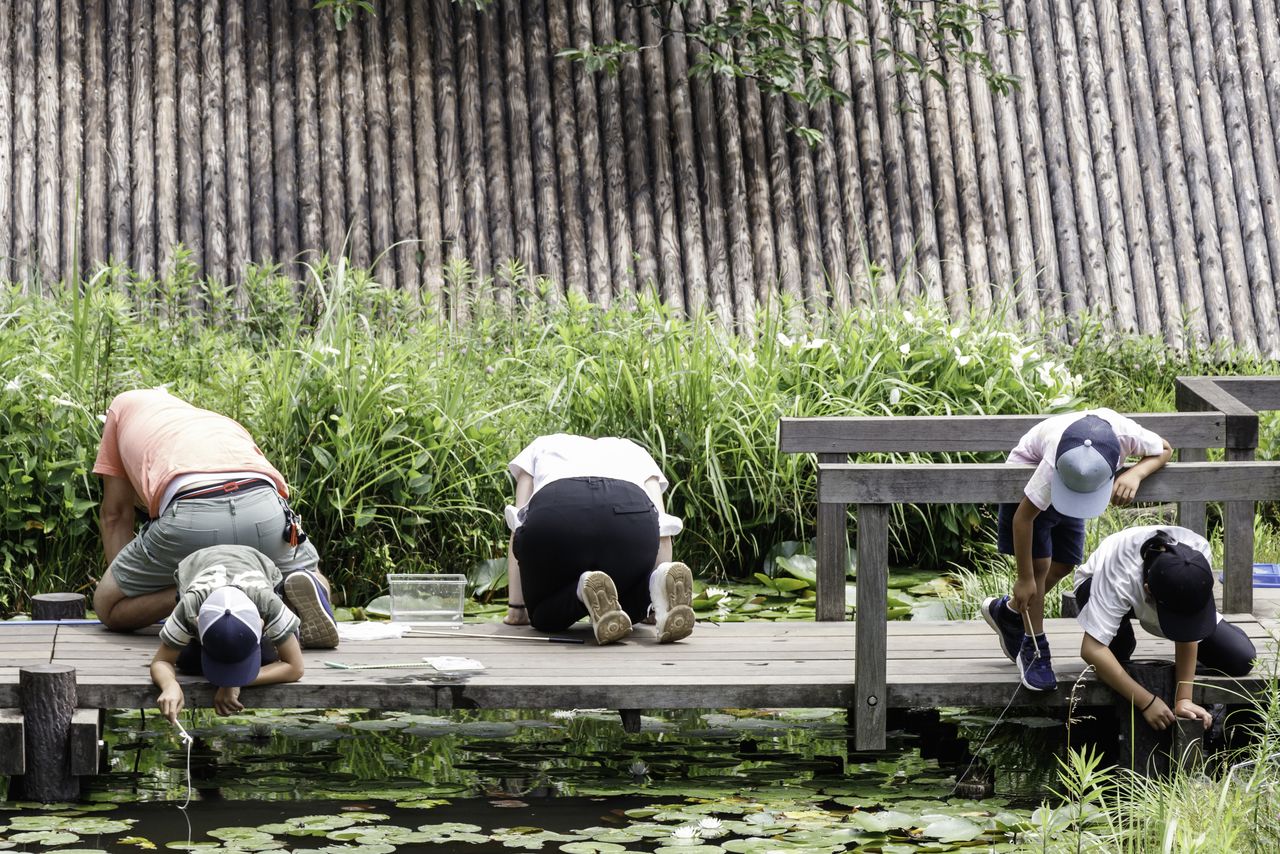 The prospect of a ban on the commercial breeding and sale of crayfish also made me wonder what would happen to the crayfish trade at Tokyo’s Toyosu Market. In the summer of 2009, when the Tsukiji seafood market was still open, I wrote an article describing how the wholesale price of American crayfish had doubled to ¥2,000 per kilogram in the space of 10 years. 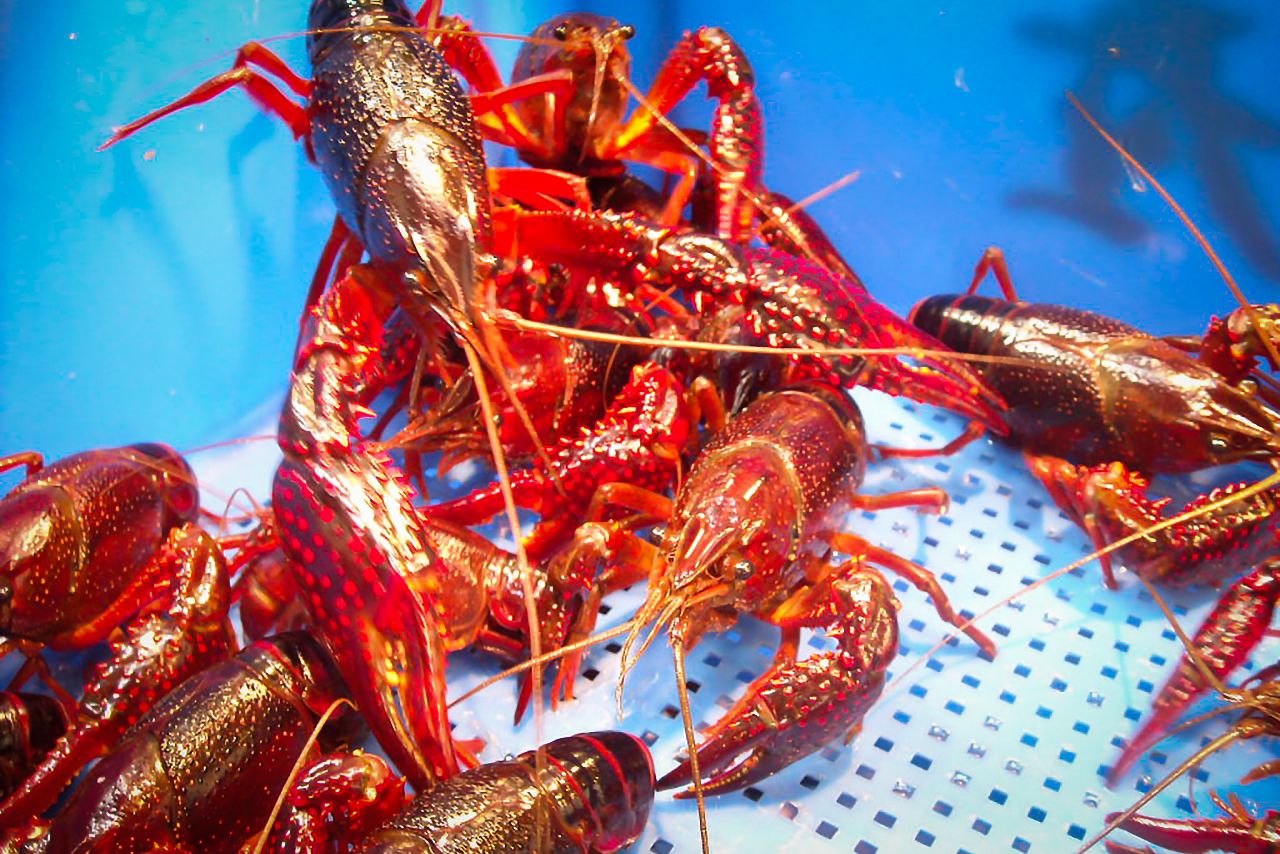 In 2009, American crayfish wholesaled for ¥2,000 per kilogram at the Tsukiji market. (© Kawamoto Daigo)

More than 10 years later, crayfish at Toyosu can now sell for ¥3,000 a kilogram in summer. A buyer at the market told me that crayfish are still popular with French and Chinese restaurants. The high prices achieved are due to the fact that crayfish are becoming more scarce. An Ibaraki-based seafood producer that trades in American crayfish told me that fertilizer use has decimated the local crayfish population. A decrease in the number of rice paddies, the crayfish’s natural habitat, combined with improved drainage resulting from more prevalent irrigation ditches has made it more difficult for the creatures to reproduce.

Volumes traded on the market are tapering off, as was evidenced by comment by a Toyosu buyer: “We receive a lot of orders in summer, but supplies are sporadic and lots small. Last year I stopped accepting orders for crayfish.”

Most restaurants source their crayfish directly from the producer, but I wonder if even this supply might eventually dry up. 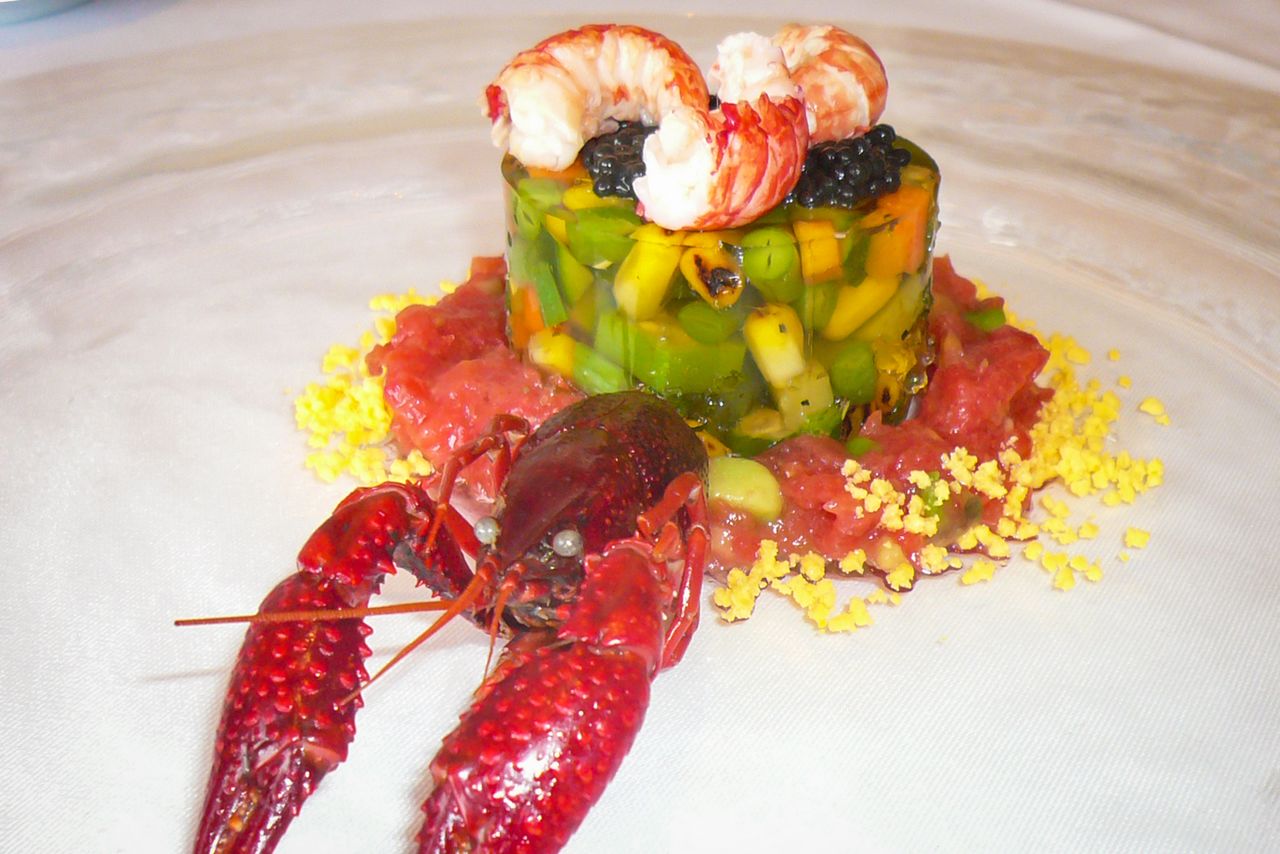 A crayfish dish served at a French restaurant. (© Kawamoto Daigo)

The signal crayfish, which was listed as a pest in 2006, still appears on restaurant menus. One hotel restaurant in Tokyo hotel has served boiled signal crayfish for many years, and says the fact that this type is larger and cheaper than its American counterparts makes this a popular dish. A two-person serving of signal crayfish is only ¥400, cheap for a hotel restaurant in Tokyo (January 2022). (© Kawamoto Daigo)

As the staff member from the Environment Ministry who I talked to explained,

“In the interests of maintaining vendors’ livelihoods, those who have been trading crayfish for human consumption since before the regulations are introduced will likely be able to continue to do so, as long as they obtain a permit.”

The staff member said the same applies to the Shanghai crayfish, which was listed as a pest at the same time as the signal crayfish, and that operators who had traded the creatures before the introduction of regulations had been granted permits for the importation and sale of the creatures. It would appear that the American crayfish will not be disappearing from menus either.

In fact, a dish that features American crayfish called mala xiaolongxia is currently seeing tremendous popularity among younger Chinese diners. In summer, when crayfish are in season, the mild spicy flavor of mala xiaolongxia is the perfect complement to beer, and restaurants are reporting record sales of the dish. In Tokyo, too, an increasing number of Chinese restaurants in areas frequented by Chinese students like Takadanobaba and Ikebukuro have added crayfish to the menu. With signs that mala xiaolongxia could now take off in Japan, one hopes that any regulations on crayfish will be flexible, while at the same time ensuring that the environment and ecosystem are protected. 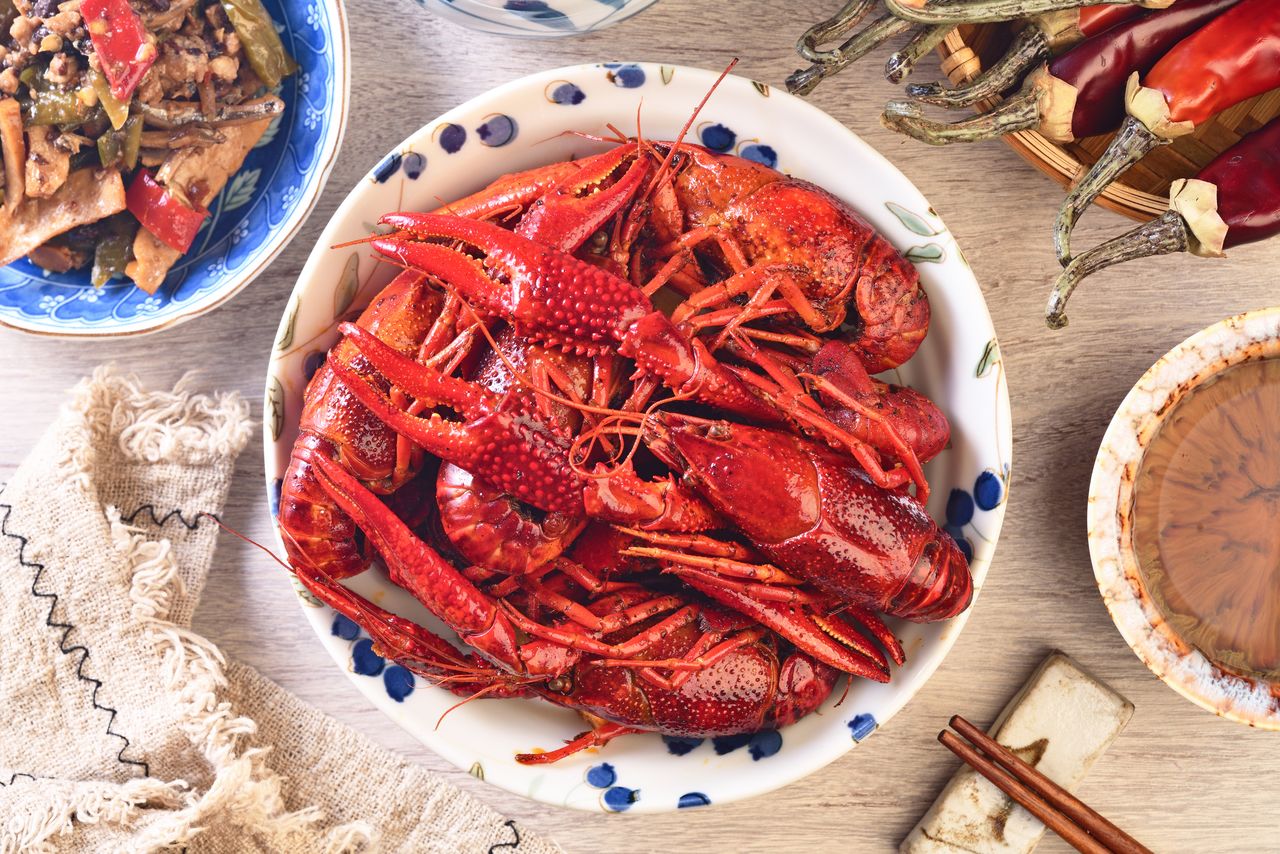 Spicy steamed crayfish is the perfect complement to beer, making it likely to be a hit with Japanese diners. (© Kawamoto Daigo)