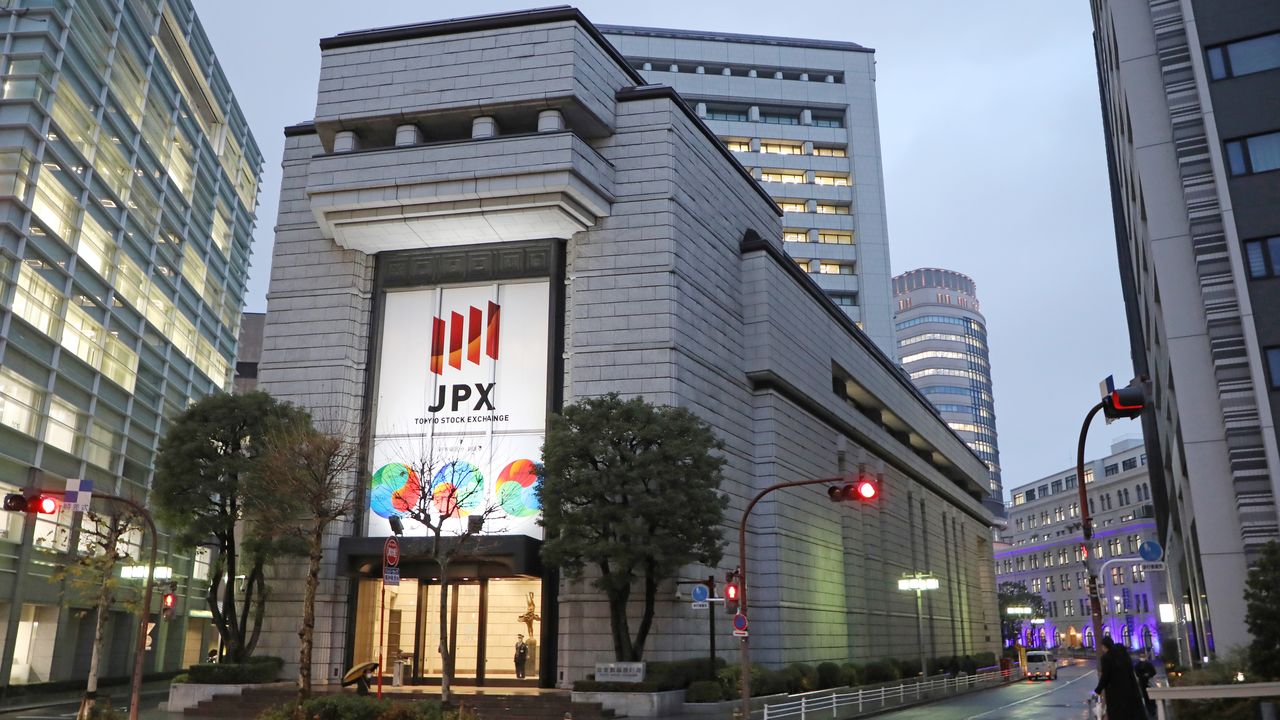 Economy Politics Global Exchange Apr 4, 2022
The Tokyo Stock Exchange had a presence comparable to the New York Stock Exchange at the height of Japan’s asset-price bubble. Since then, the TSE has fallen to fourth in market capitalization after the NYSE, Nasdaq, and the Shanghai Stock Exchange. To remedy the sinking of its foundations, the TSE will reorganize its market structure in April 2022. Will the market find success?

The Tokyo Stock Exchange will reorganize its existing market structure in April 2022. Japan’s stock market is no longer a world leader and is losing ground to Asia’s regional markets. Without change of some sort, it is highly probable that the TSE’s presence will diminish further, and there is therefore no time to waste. However, in view of the restructuring plan and the progress made to date, fundamental changes seem unlikely, and reforms may go no further than simply relabeling existing market segments.

The TSE was once viewed as a major world bourse, along with the stock exchanges of New York and London. This was a time when Japanese companies enjoyed strong earnings and enormous global influence was.

During the asset bubble years, the TSE’s market capitalization rose to about ¥190 trillion in 1985, a size comparable to the NYSE’s market cap at that time of ¥244 trillion. The TSE’s market cap even exceeded the NYSE’s in 1989, at the height of the speculative bubble. Following the bubble’s collapse, however, this market cap has trended downward and is currently about one-fourth the size of the NYSE’s or Nasdaq’s. The combined market capitalization of the Hong Kong and Shanghai stock exchanges is already more than twice that of Tokyo. An increasing number of foreign institutional investors have begun to exclude TSE-listed companies from their portfolios.

Fears of the TSE becoming a regional Asian stock exchange have been felt for some time by the exchange’s stakeholders, who have held multiple discussions on needed reforms. It is frequently the case when reforms are attempted in Japan that the interests of stakeholders are poorly coordinated, that agreements are reached in principle but not in practice, and that the measures become watered down in the end. Previous attempts to reform the TSE were no exception, and the same difficulties prevented these achievement of real change. The declining standing of Japan’s stock market, however, can no longer be ignored, and the restructuring being considered may be the TSE’s last chance.

The reform of the TSE consists of two pillars: market restructuring and the overhaul of the Tokyo Stock Price Index (TOPIX).

The TSE currently consists of four market segments: the First Section, Second Section, JASDAQ, and Mothers. These segments will be reorganized into the three segments of Prime Market, Standard Market, and Growth Market. Stated in simple terms, the Prime Market will be a market for companies meeting global standards, the Standard Market for other companies, and the Growth Market for startup. 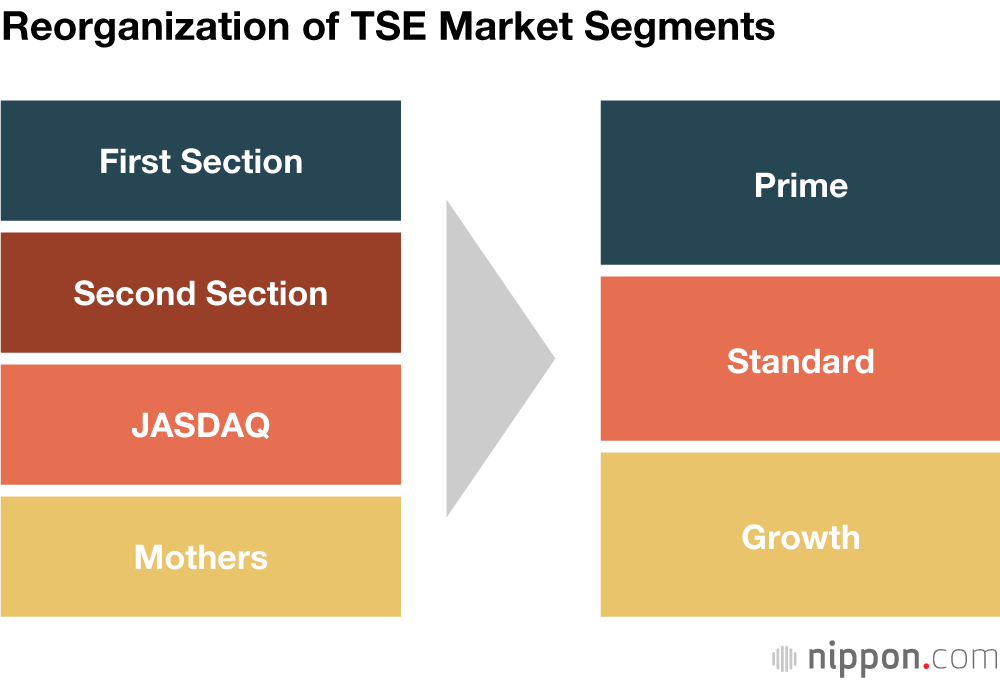 Of these three new market segments, the transition to the Growth Market can be expected to go smoothly. JASDAQ and Mothers are both meant for startup companies, and the difference between them, while not all that apparent, is explained by their histories. JASDAQ developed not as a stock exchange but as an OTC market where stocks are traded over the counters of securities companies.

JASDAQ was formerly the only market where startups could be listed. Following its acquisition by the Osaka Securities Exchange, it was incorporated into the TSE in 2013. Mothers, on the other hand, is a market the TSE created for startup companies, making it a rival to JASDAQ. Nearly a decade has passed since JASDAQ became part of the TSE. Few stakeholders are likely to object to the creation of a single market for startup companies.

The situation is more complicated for the Prime and Standard markets. A sizable difference exists in the number of companies listed on the First and Second sections, with 2,180 listed on the former and 473 on the latter (as of March 2, 2022). In other words, it would not be greatly mistaken to say that “TSE-listed companies” comprise those listed on the First Section only.

A Low Market Capitalization Per Company

Influenced in part by government policy, companies preferred to raise funds through indirect financing (bank loans) rather than direct financing (the issue of shares) since World War II. This has led to the persistent criticism that the stock market has not functioned as a means for raising funds in Japan. Rather than the purpose of raising funds, many companies sought to list their shares to enhance their recognition or to boost employee morale. Naturally, many companies preferred to be listed on the First Section.

Given this situation, the TSE has not adopted particularly stringent standards, since that would disqualify and reduce the number of listed companies. Weakened standards, however, have let companies that should not qualify maintain listings on the First Section. As a result, a large number of companies remain there, and TSE’s market segmentation is failing to serve its purpose.

Easy listing standards mean that companies with insufficient financial strength can still readily list their shares. Such companies will have little incentive to increase earnings in a sustained manner to maintain their position. In the long term, such an environment will cause such harms as the loss of confidence in the broader market and the decline of market capitalization.

A comparison of the TSE with the NYSE is enlightening. Market capitalization per company is about ¥270 billion for the First and Second sections of the TSE, which is only about one-fifth of that of the NYSE. Lax securities exchange standards and the ease of remaining listed can be said to be factors behind the decline of TSE’s market capitalization.

If the TSE is serious about restoring the standing of Japan’s market, it should take the decisive step of tightening the standards of the top-tier Prime Market and allow the listing of only those companies meeting global standards. Initial expectations were that such reforms would be made. In actuality, changes were few, and 84% of companies listed on the First Section will be listed on the Prime Market. While this is some improvement, it will not be enough to strongly promote an increase in the market capitalizations of companies.

The second pillar of pending reforms is the overhaul of TOPIX that will be implemented on October 31, 2022. This overhaul may not function properly if the new TOPIX is not closely linked with market segments and if market restructuring does not go well.

The current TOPIX is an index of all stocks listed on the First Section and is weighted by market capitalization. Following its overhaul, the stocks in TOPIX will be selected according to a new standard regardless of their market segment. In the transition period for the new TOPIX (October 31, 2022, to January 31, 2025), First Section stocks will continue to be a part of the index.

Through a selection process based on the market capitalization of outstanding shares and other factors, the quality of stocks included in the new TOPIX will be gradually raised above the current implementation.

Stricter standards will naturally create expectations for improvements in performance. This effect, however, will differ depending on the selection standard that is chosen. If the selection standard is limited to the market value of outstanding shares, most observers believe that the new TOPIX will not differ so greatly from its current version.

The new TOPIX can be expected to encourage companies to increase their earnings, since stocks will not necessarily be included in the index simply for being part of the Prime Market. This effect, however, is unlikely to be significant if the new TOPIX differs little from its current version. TSE reforms as they stand now are limited to perfunctory changes to market segmentation and the stocks constituting TOPIX. One can wonder whether the market’s management will actually see real changes.

Only the Market Can Promote Corporate Reform

As noted above, the stagnation of Japan’s stock market is largely the consequence of the poor earnings of Japanese companies. The aggregate sales of Japanese companies have been flat for the most part since 1990. Over the same period, US firms have seen their sales triple. Since the ratio of value added to sales (gross profit margin) has changed little in Japan, sales have declined in relative terms, meaning that the value added of companies has also declined.

The low wages paid by Japanese companies have become an issue in recent years, and the administration of Prime Minister Kishida Fumio is examining tax policies that would boost wages. Economic theory, however, stipulates that as long as the value added by companies does not increase, neither will the wages of workers. The cause of falling wages in Japan is the low profitability of Japanese companies. Hence, market reforms will be a powerful driving force for rectifying this situation.

For companies that issue stocks, only shareholders can directly influence them, and only the market can prompt shareholders to act. The stock market can be viewed as the last stronghold protecting Japan’s economy. If this market is unable to reform itself at its own initiative, this will further reduce the confidence in Japan’s economy.

(Originally published in Japanese on March 9, 2022. Banner photograph: The east entrance to the main building of the Tokyo Stock Exchange displaying the logo of the new market segments on January 11, 2022, in Chūō, Tokyo. © Jiji.)