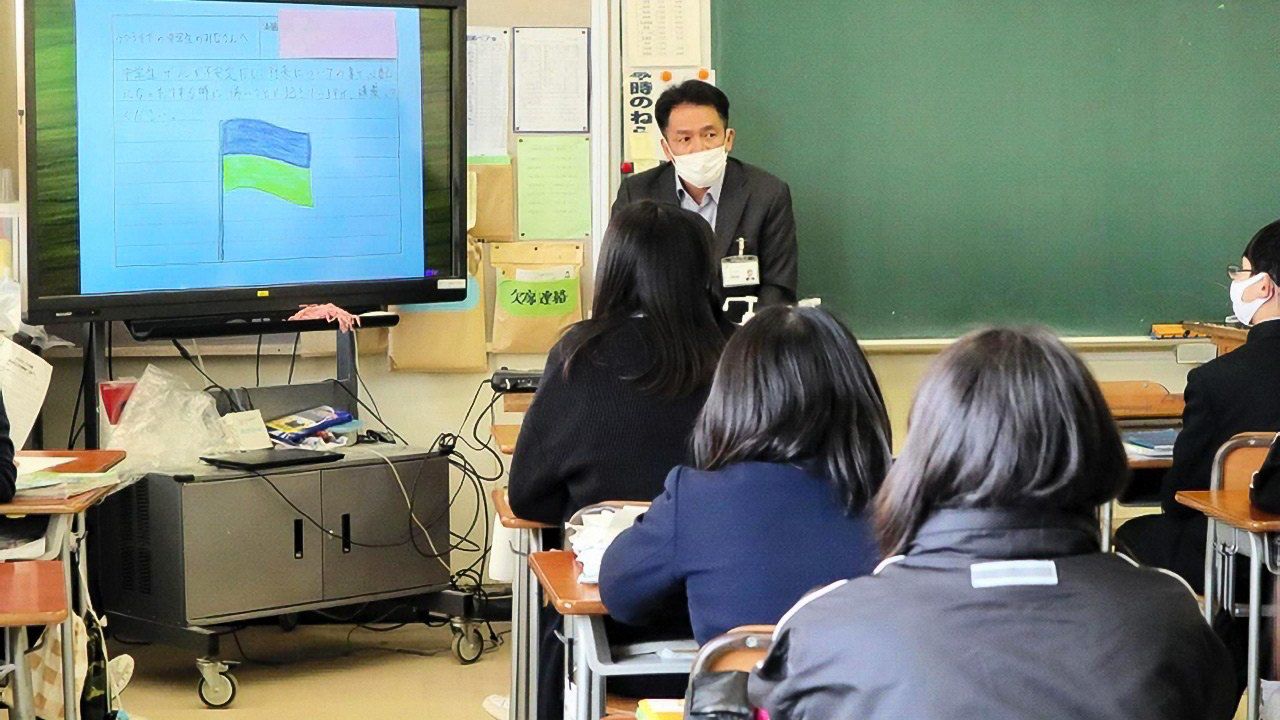 Education Society Apr 19, 2022
More than six weeks into the Russian invasion of Ukraine, the global media are filled with images of the conflict and its victims. Educators in Japan have long focused on the importance of peace and the evils of war in abstract terms, but addressing a conflict playing out in real time is a more challenging task.

Getting an Education from Current Events

[Kobe Shimbun] At Hamawaki Junior High School in the city of Nishinomiya, Hyōgo Prefecture, Nishimura Satoshi approached his fellow social-studies teacher Shibutani Yoshitaka on February 24 this year with a proposal: “How about focusing on the Ukraine issue with our eighth-grade classes?” That very day, the issue exploded into violence as Russia launched its invasion of Ukrainian territory.

Hamawaki’s eighth graders are active participants in the Newspaper in Education program, and all students maintain a personal collection of news clippings on stories they follow. They arrive at school each day having looked over the stories in the morning paper and discuss the latest topics in their morning assembly; in the runup to the invasion, Ukraine had been the focus of much of their attention.

In planning the Ukraine learning unit, Nishimura says, “I didn’t want it to end up a shallow treatment of the issues—we had to go deeper than just saying ‘we’re against war’ or ‘oh, these poor people.’” The teachers set aside three hour-long class periods, dedicating the first to an overview of Ukrainian and Russian history, geography, and other basic facts. The second covered specific historical topics like the 1979–89 Soviet invasion of Afghanistan and Russia’s 2014 annexation of Crimea.

For their classwork, the students explored the issues without any preconceived judgment in mind. They gathered information in newspapers and online to clarify the claims made by Russian President Vladimir Putin, the nature of involvement by the United Nations and other national actors, and many other factors. Throughout this process, Nishimura reminded his students: “There aren’t any correct answers for you to arrive at here. You need to think about these things yourselves.”

In the final hour of the unit, the students drew on what they had learned so far and sat down to write messages to selected groups of people involved in the conflict.

“To the junior high school students of Ukraine: Ours is an age when we have yet to find a state of calm mental stability, even in the best of times. It must be terrible to go through what you are experiencing during this part of life. Please find a way to make it through.”

“To the people in favor of this war: We hope you will take the time to look back on the past. Today, in an era when nuclear weapons exist, we can only expect the number of victims to climb still higher. Resolving issues through armed force can only result in people’s deaths. Wouldn’t it be happier to take the time to thrash things out with words instead?”

The ongoing conflict is increasingly messy, with Russia and Ukraine stating their opposing cases while the United States, China, and other major powers project their own interests as they become involved. Educators who have worked to pass forward the lessons of World War II in Japan are finding their work cut out for them as they seek ways to address the Russian invasion today.

Okamura Takahiro, a high-school teacher and head of a group researching the victims of the bombing of Kobe during World War II, says: “Japan has long viewed the wars taking place around the world as ‘fires on the opposite shore,’ to use the Japanese saying—distant events with no real connection to the country. But the time has come for the Japanese to face these conflicts seriously.” At the same time, he stresses, “There’s a real danger in taking a one-sided view of things. We have to consider them in the context of the grand sweep of history.”

Okamura says that he feels afraid when he sees the heroic light in which Ukrainian President Volodymyr Zelenskyy is depicted in the media. “There’s no such thing as absolute right or absolute wrong. In Japan right now anyone seen to be supporting Vladimir Putin in any way is likely to come in for severe criticism. There’s a real lack of composure in the public discourse today.”

Okamura goes on: “The important thing is for us to learn from the repeated events of history, to put our imagination to use, and to figure out ways we can put an end to war. In instructing the younger generations, we have to give them the tools to consider these issues as though they were happening directly to them.”