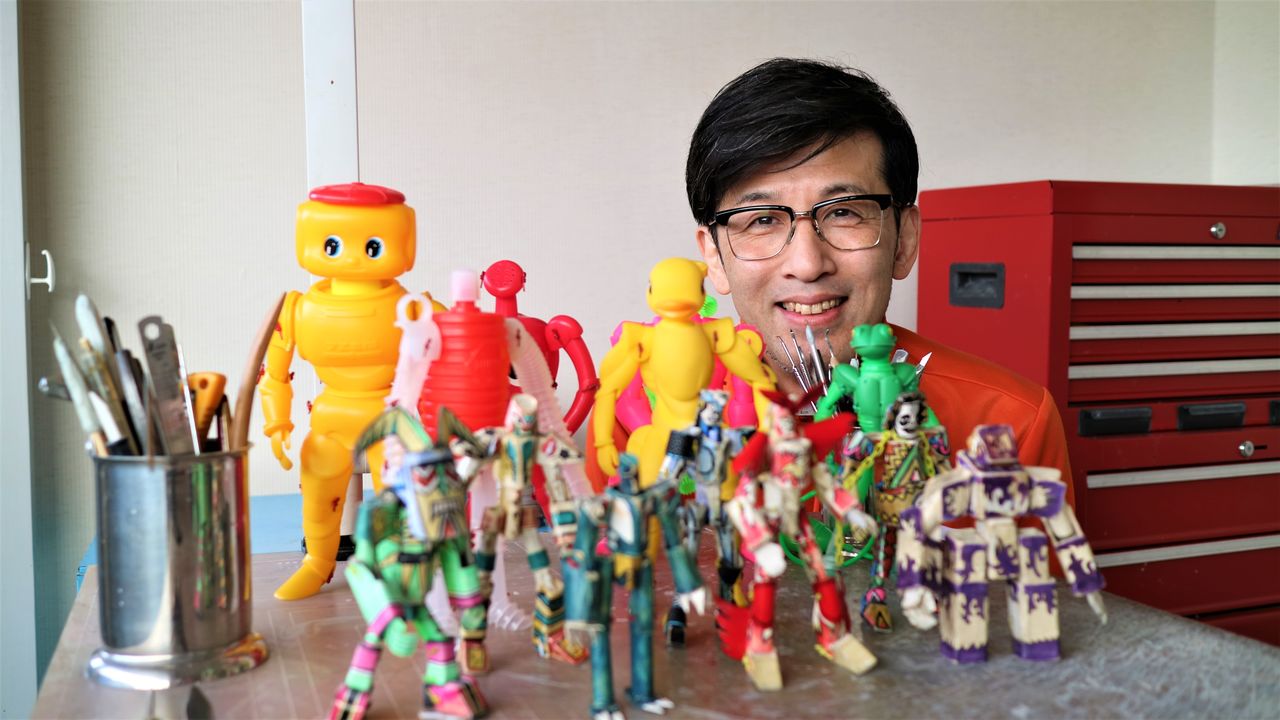 Art Jun 27, 2022
The renowned creator Yasui Tomohiro released a book on toymaking using cheap goods from the 100-yen store in February 2022. An enjoyable read in its own right for both young and old, the book shows readers how to create DIY action figures. An interview with Yasui in his Kyoto studio.

Everyday Objects as You’ve Never Seen Them Before

Hyakkin guzzu kaizō hīrō daishūgō (Making Your Own Action Figures from 100-Yen-Store Goods) is a book that brings rubber ducks, tires, squeaky hammers, and other familiar everyday objects and toys to life in all-new ways. This is the work of Yasui Tomohiro, the creator of the figurines. Many will have seen the suit of armor Yasui fashioned from traffic cones: A seven-second clip of Yasui walking through an overgrown courtyard while wearing the suit has garnered over 170,000 likes on Twitter and been viewed over 2.5 million times as of April 2022. 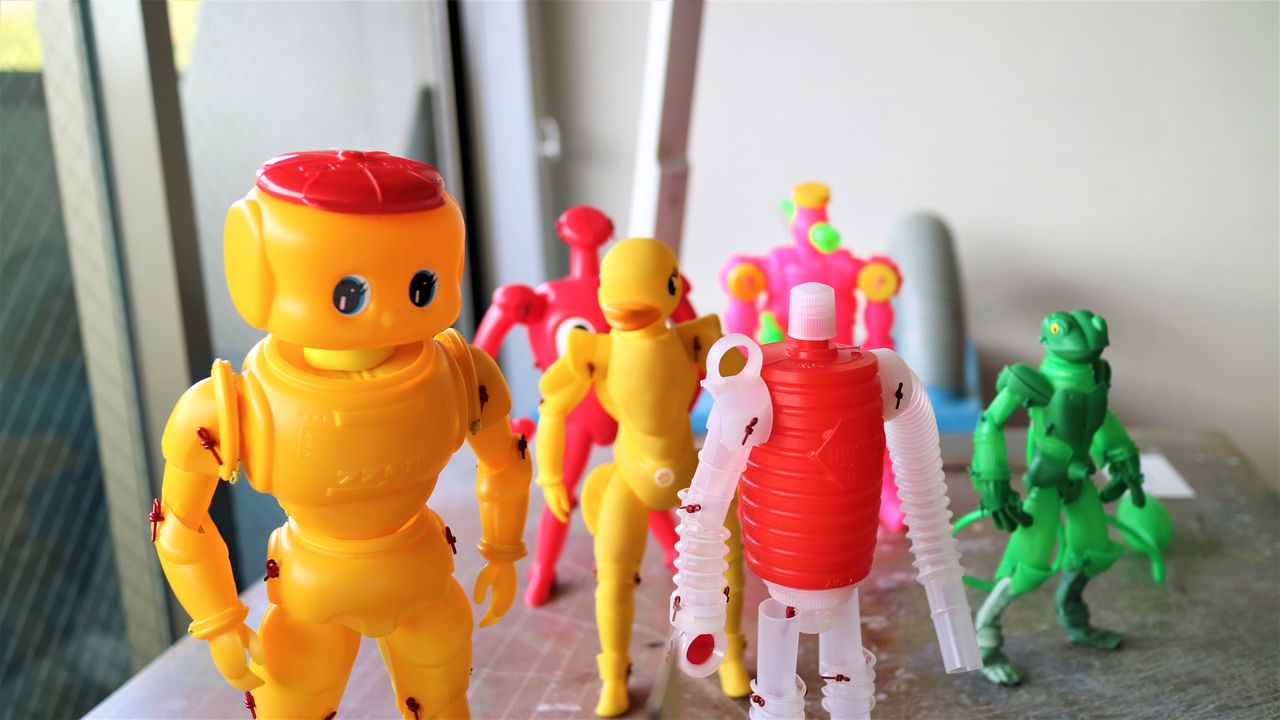 All of these models were made from everyday objects. (© Kondō Yūki)

Based on Yasui’s creations alone, you might imagine him to be an easy-going artist who makes figurines to please people. However, there is more to him than that. After all, he was included in the Newsweek Japan feature 100 Japanese People Respected Around the World, and replicas of his creations have been sold by the Museum of Modern Art in New York. So just who is Yasui Tomohiro? Let us start with a discussion of his paper robots, which are key to understanding the man.

Yasui’s “paper robots” are 15- to 20-centimeter-high humanoid figurines that Yasui has been creating out of paper since he was nine years old. The robots sport highly flexible joints, thanks to a special hinge invented by Yasui that he has dubbed the yasuijime. Intrigued by the way his homemade robots were much more flexible than regular action figures, Yasui created hundreds of the figures, which he dressed as wrestlers and had fight each other. In the process, each robot developed its own personality and story. The artist has created over 600 paper robots to date. 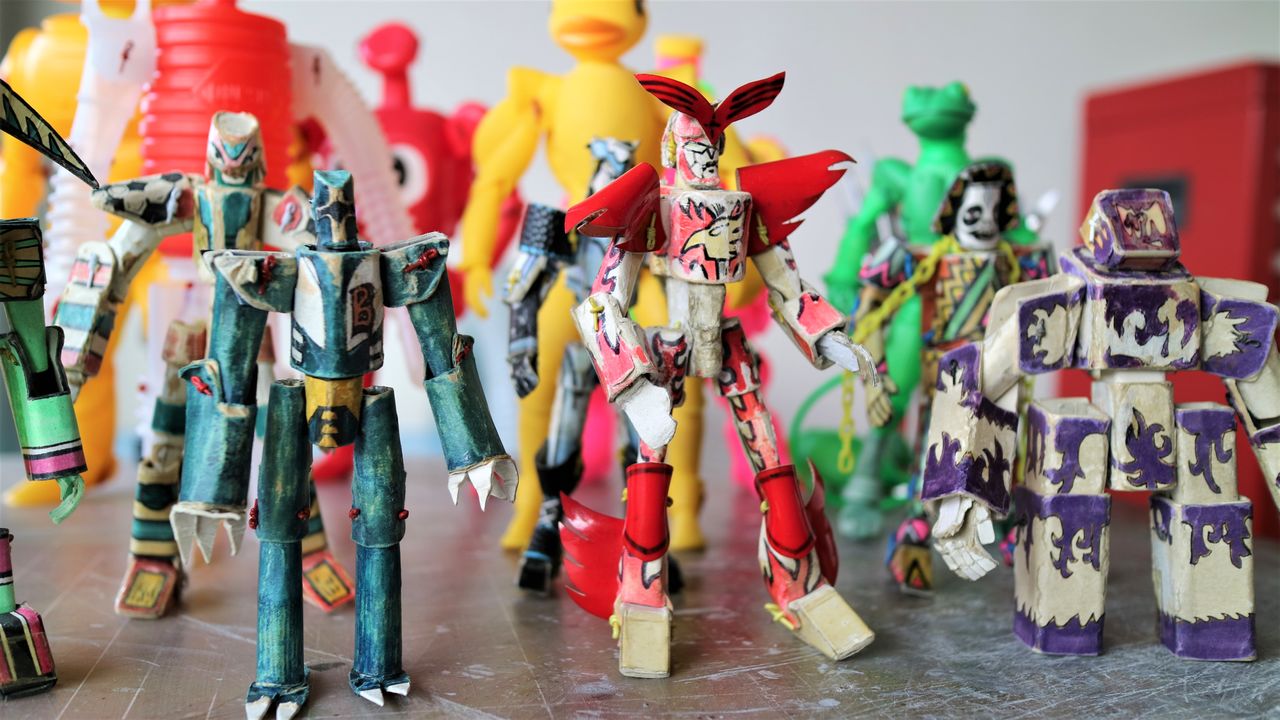 Each of Yasui’s paper robots has a name and background story. (© Kondō Yūki) 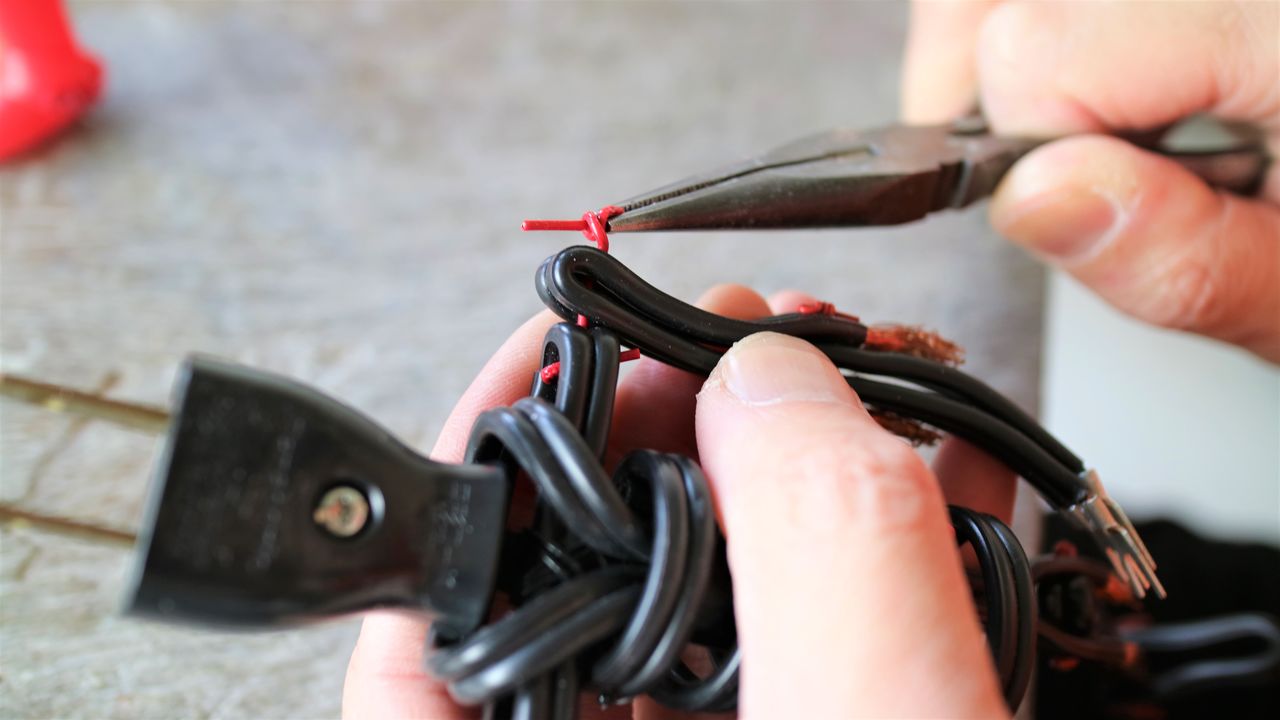 The unique wire hinges give the figurines their flexibility. Amazingly, the artist invented this technique as an elementary school student. (© Kondō Yūki)

While Yasui’s international recognition will make him the envy of anyone in a creative line of work, the artist himself has mixed feelings about his fame.

“I originally made the paper robots to play with. I’ve been embarrassed to have others see them,” he says.

Yasui says he can trace his feelings back to elementary school, to the experience of having his friends delight at the Gundam plastic models he assembled, while meanwhile showing no interest in his original paper robots.

“My friends mocked my robots, which really hurt. They would ask me to assemble off-the-shelf models for them, but never to make paper robots. This made me realize that there was a clear distinction between the two,” he says. 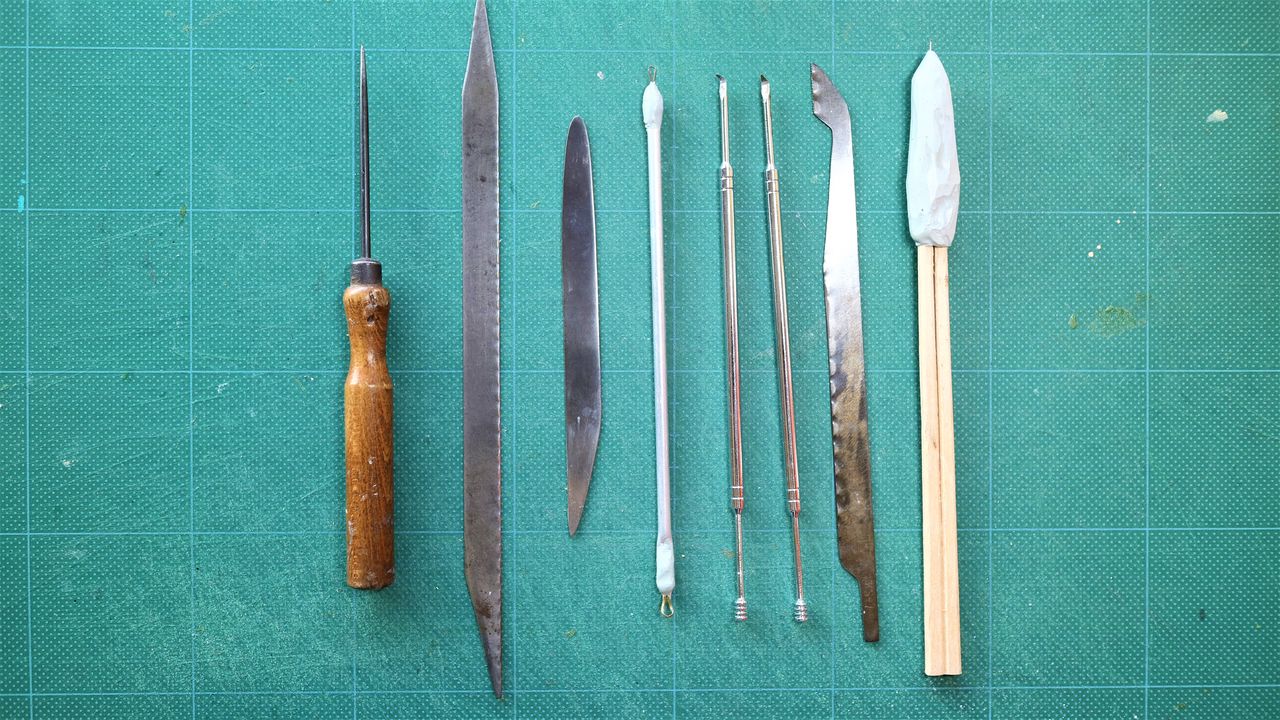 Yasui has used some of these tools for decades. (© Kondō Yūki)

By the time he started junior high school, Yasui had stopped making robots. Thrusting himself “into the light,” he joined the school soccer team.

After starting high school, however, the more Yasui tried to put his nerdy hobby behind him, the more he felt that nothing was going right in his life. He didn’t know who was anymore. In his final year of high school, he was struck by an urge to make robots again. He dug out the collection he had banished from his life and began adding to them. Standing robots he made in the past up against new ones gave him inspiration.

“The old and new robots were separated by a clear hierarchy and a real time continuum. Each robot had its own world. As soon as I realized this, I began creating a deeper story for each robot,” he says. 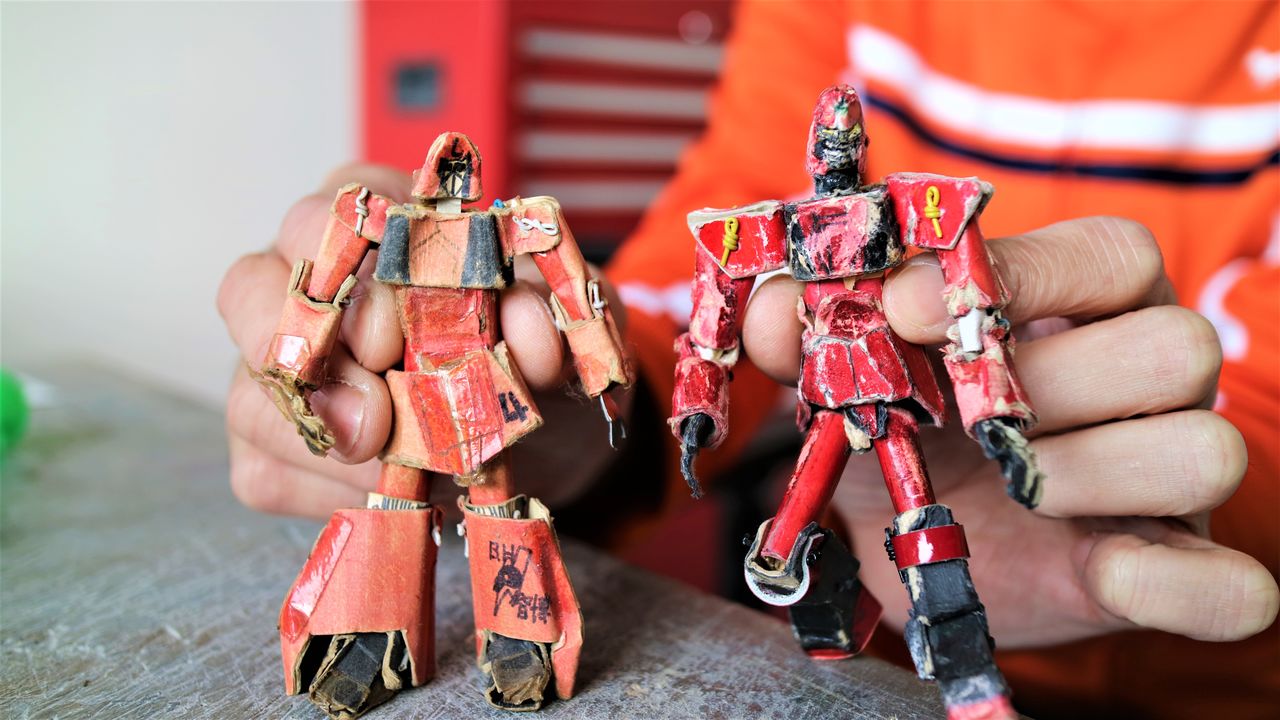 Yasui made the robot on the left when he was 11 and the one on the right when he was 12. The spirit of the older robot was transferred to the newer one, he says. (© Kondō Yūki)

After university, Yasui got a job with a company that made costumes for action heroes, and later moved to a company that made masks for wrestlers. He then began freelancing as a modelist but continued to make his paper robots. His imaginary world of robot wrestling, in which paper robots would spar against each other, became more and more sophisticated.

Then, just before he turned 30, his life hit a turning point when he happened to show his robots to noted creative director Aoki Katsunori, whom he met through his work. Aoki later suggested that Yasui showcase the robots in exhibitions. Aoki was enthralled by the paper robot concept, which he thought was very creative.

While happy to receive recognition, Yasui was still embarrassed about his robots. However, despite some doubts, he eventually decided to go ahead with the exhibitions. In addition to exhibitions in Japan and overseas, Yasui also held a live “paper robot fight” that featured wrestling robots. 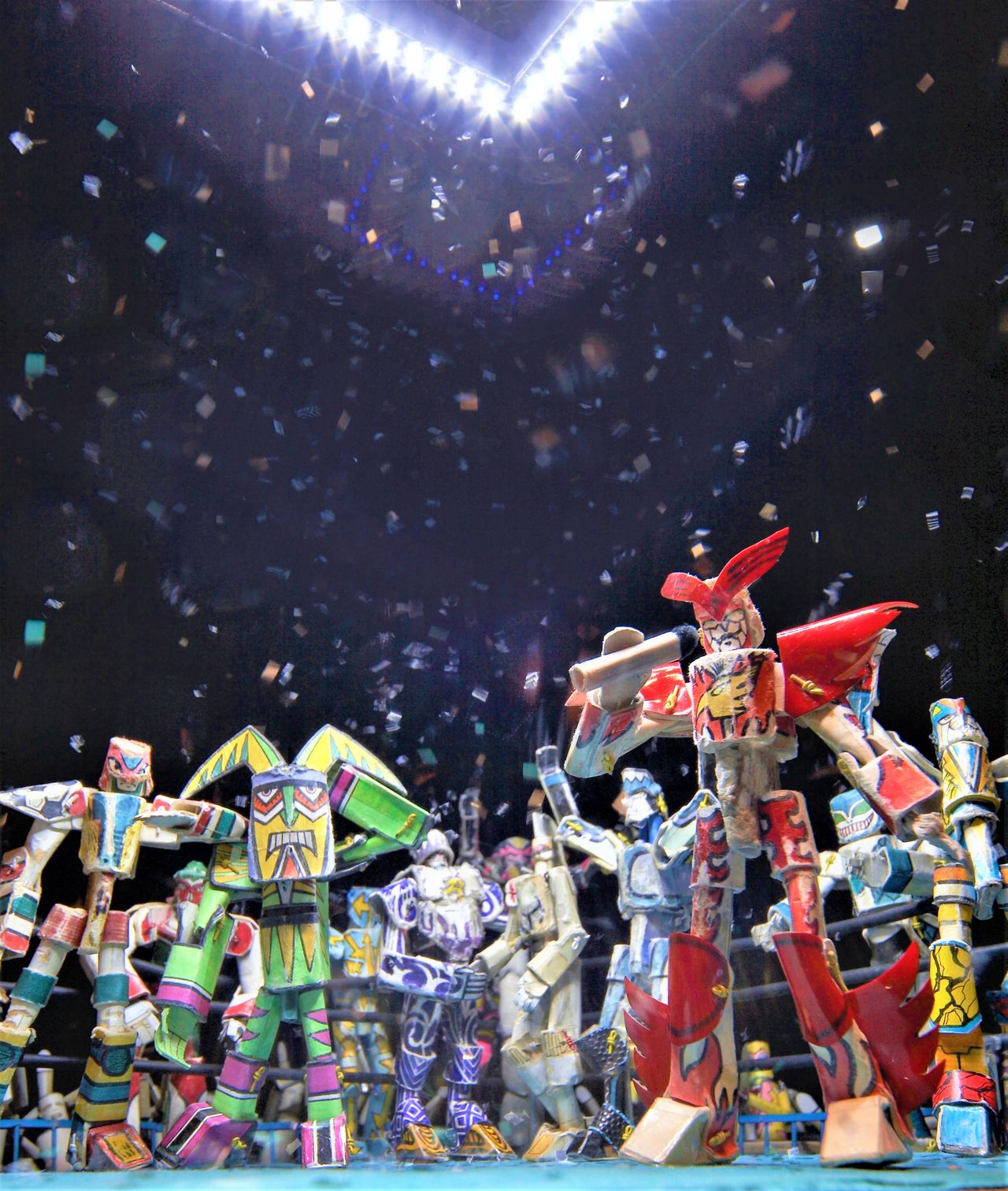 The paper robots are part of a detailed imaginary world. (© Yasui Tomohiro)

The size of the public reaction to the robots was quite unexpected. Acclaim transcended national borders, and Yasui received approaches from unexpected places. In addition to MoMA and Newsweek, even high school art textbooks featured the robots. A video of the figures fighting was also posted online, creating loyal fans and a paper robot craze that lasted for several years before gradually subsiding. In 2013, Yasui staged a final paper robot “fight for justice,” thereby drawing a line under this chapter in his life.

Learning to Deal with Shame

It has now been nearly a decade since that last robot fight. In the years since, Yasui has been less active in showing off his robots, but the robot world he created has continued to evolve. As an evolution of the paper robot idea, Yasui began to create robots from other materials and objects. The product of this process was his figures made from everyday objects, leading to his latest book.

“My tweet of a figurine made out of a rubber duck got around 250,000 likes. That unexpected response made me decide that I would create more, seeing as these figures are something people are able to enjoy while the world is depressed about COVID-19,” he says.

Yasui crafts the figures from familiar, everyday products. At the same time, he says he feels like he is putting his own private world on display, sensing some of the same embarrassment that he felt about his paper robots. For Yasui, therefore, the figurines made from everyday objects lie somewhere between the Gundam figures and the paper robots.

“I also have a rational, adult side that sees this as a way to share the imaginary world of paper robots I’ve created inside of me. While I still feel embarrassed about sharing what is inside, recently I’ve learned how to handle that shame somewhat,” laughs Yasui.

Complete with a Personality and a Past

While the artist frequently self-effacingly using the word “embarrassing” to describe the fantasy world he created, the more you listen to him speak about paper robots, the more passionate he becomes. In particular, his story about the attention-seeking Birdman and Madroneck, who lurks in the shadows, was filled with profound emotion. 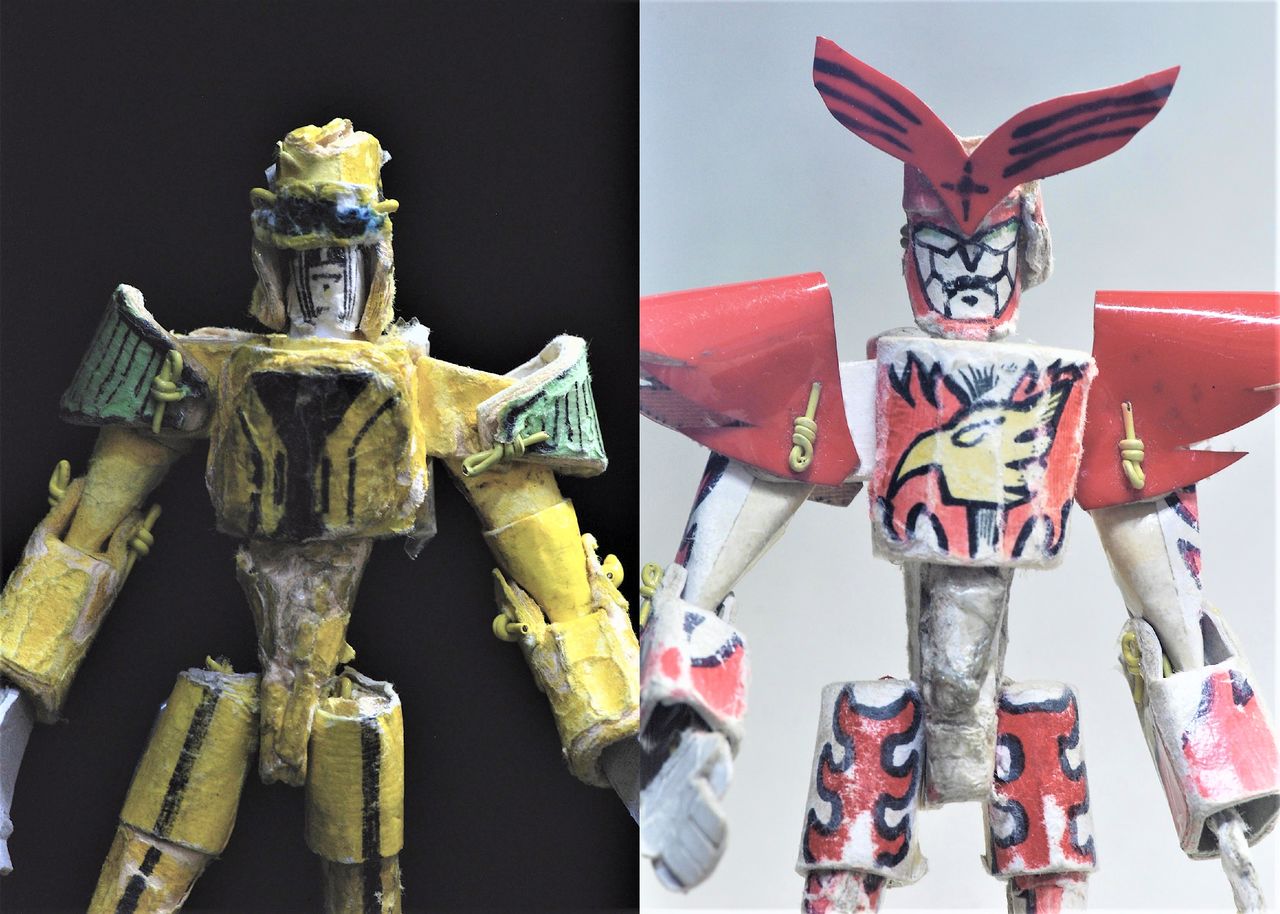 Both Madroneck (left) and Birdman have distinct personalities. (© Yasui Tomohiro)

“A reporter once asked me to make ‘the red robot and the yellow robot,’ Birdman and Madroneck, fight each other for a photograph. This didn’t seem right, however—I was like, ‘No, I can’t do that.’ Each robot has a personality and a past. I knew all too well that Madroneck, not being a sociable robot, wouldn’t be interested in fighting and would refuse the challenge. I realized I couldn’t make them fight,” says Yasui.

Yasui told this story with emotion and in a single breath, as if possessed by Madroneck. I was taken aback at first, but when I realized how incredibly passionate Yasui is, I was moved. The artist then laughed as if regaining his senses. Yasui is an artist who can delve deep into his inner world while at the same time possessing the objectivity to look at himself from the outside. That is why Madroneck’s emotions, as conveyed by Yasui, felt real to me.

By the end of our two-hour interview, I realized that I too had been drawn into Yasui’s imaginary world. I encourage readers to check out his book on robot creation to gain a glimpse of this world. It will make you want to learn more about the artist’s deep, vast imagination.