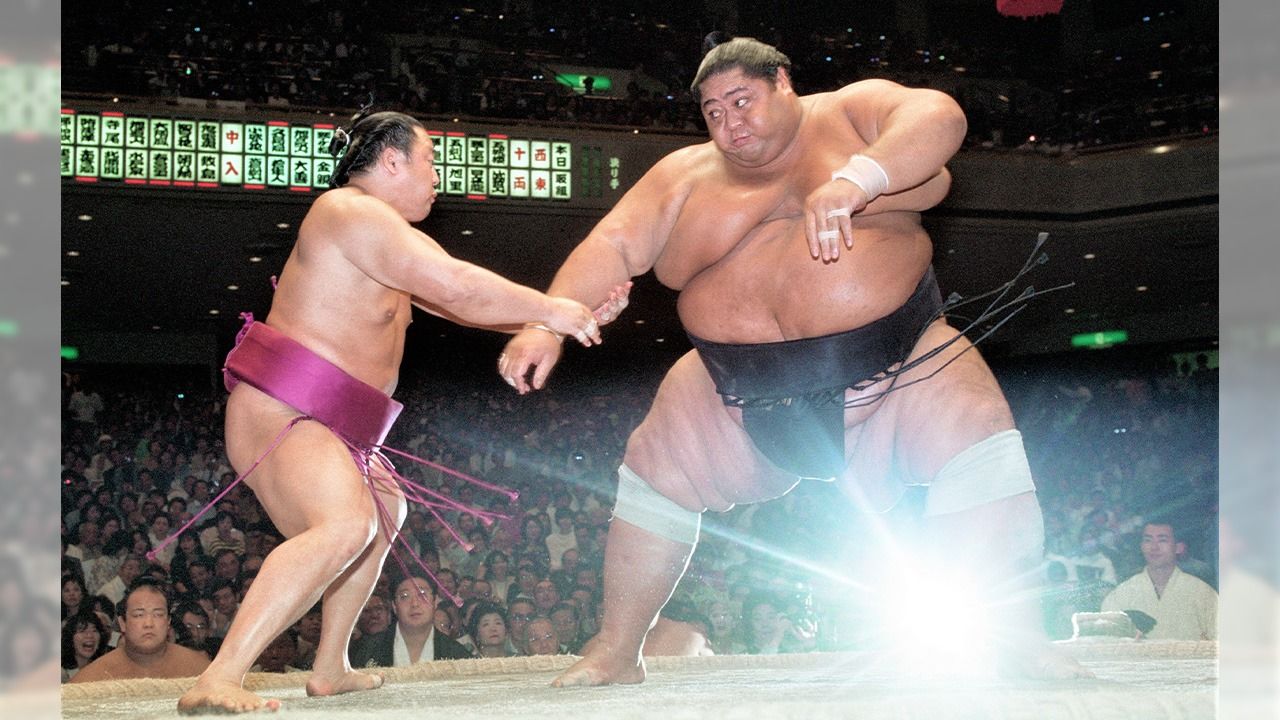 The Essence of Mainoumi’s Sumō: Compensating for Small Physical Size

Culture Sports Jul 28, 2022
Mainoumi brought a breath of fresh air to the world of sumō with his repertoire of winning techniques. But his path was anything but smooth: the first major obstacle was the height requirement. Mainoumi was short by a few centimeters, but a rebellious spirit helped him make it to the top ranks. 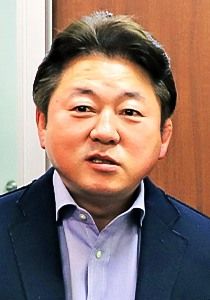 Former sumō wrestler and current commentator on NHK sumō tournament broadcasts. Born as Nagao Shūhei in 1968 in Ajigasawa, Aomori Prefecture. After graduating from Nihon University, he was offered a teaching position at a Yamagata Prefecture high school but opted to become a sumō wrestler instead, joining the Dewanoumi stable. Rising to the rank of komusubi, he used his small stature and a range of unusual moves to defeat much larger opponents. Five-time winner of the Technique prize. After retiring from the ring in 1999, he has served as a commentator on NHK sumō tournament broadcasts since 2000.

(For part 1 of this interview, see “The Essence of Mainoumi’s Sumō: When Small Can Win Big.”)

NAGAYAMA SATOSHI  Sumō has long been popular in your hometown of Ajigasawa, Aomori. At age ten you wrote an essay for school analyzing the weak points of your opponent in a match, typical of your bent for research in the sport. You went from a strong high-school program to Nihon University, renowned as a sumō powerhouse and alma mater of numerous top rikishi.

When you joined the team there, you were just 169 centimeters tall and weighed 65 kilograms. I hear that although you were not a big eater to start with, you ate up a storm when the coach said you could participate in matches if you got your weight up to 90 kilograms.

MAINOUMI SHŪHEI  Yes, I ate like there was no tomorrow. [Laughs] Morning and evening, I would eat five big bowls of rice. At lunch I’d eat two portions of the student cafeteria teishoku set meal. I was ready to do whatever it took, downing gyūdon beef bowls, udon wheat noodles, cream puffs, whatever. By my junior year, I was up to 88 kilograms.

NAGAYAMA  Anyone under 90 kilograms won’t have put on the necessary muscle for fighting in a match. New recruits spend their days practicing, eating, and putting on muscle, eventually reaching 90 kilograms or thereabouts so they are fight-ready.

MAINOUMI  To my mind, the person with the ideal sumō physique is 185 centimeters tall and weighs about 130 kilograms. I aspired to a build like that of Wakanohana II. It seemed to me that with a body like that, I could do anything. At any rate, I was desperate to keep putting on weight, or else I’d never make it into the professional ranks.

NAGAYAMA  You ultimately became a Nihon University regular, but the prevailing view was that it was almost impossible for a smaller man to become a professional. In fact, you were poised to start working as a high school teacher, but shortly before graduation you changed course and opted for sumō. after the sudden death of Narita Haruki, your Aomori compatriot and teammate at Nihon University.

MAINOUMI  That’s right. He had the right build—191 centimeters tall, 150 kilograms—and the talent, and a really promising future in sumō. When I saw his father crying over his dead son’s memorial photo at the funeral, it struck me that life can end in the blink of an eye. There’s no way of knowing when your life will end, so I thought, if that’s the case, I’d rather live my life doing something I love.

NAGAYAMA  Until you came along, collegiate wrestlers going into professional sumō had all been big men. You paved the way for smaller wrestlers to do so.

MAINOUMI  I think I have a bit of the rebel in me. Besides, I was really curious about what went on inside. Sumō is a world that’s closed to outsiders, and I wondered about things like whether the wrestlers were eating some secret, high-calorie food nobody else knew about; whether there were any tricks to their training. Moreover, I wasn’t looking for any stability in my life. A predictable life is boring, don’t you think? I found uncertainty about the future exciting.

NAGAYAMA  You faced a daunting obstacle, though: the physical criteria for new recruits. At the time, prospective entrants needed to be at least 173 centimeters tall and weigh 75 kilograms or more. [Those criteria were subsequently modified to 167 centimeters/67 kilograms, and in the case of youths straight out of junior high school, 165 centimeters/65 kilograms.—Ed.] You cleared the weight requirement but came up a few centimeters short.

When one of his senior teammates told you about an old man who could make you taller, you set out to seek his help. Was the man a qigong therapist or some kind of spiritualist? What did he do to you?

MAINOUMI  This man often treated wrestlers’ sore calves and other physical aches. It wasn’t chiropractic treatment—it was more that he was conducting psychic energy to the affected body part. I came up with the 200,000-yen fee by telling my father that I needed the money for college textbooks and set off for Kumamoto, where the man lived.

For three days, I underwent his “treatment,” which consisted of my lying flat on my back and him laying hands on my knees. On the third day, he declared that my height had gone over 173 centimeters. I went back to my quarters at the sumō club and announced to my teammates, “I’m 173 centimeters tall now.” They crowded around me, saying “Really?” Somebody produced a tape measure, I stood against a wall, and measured . . . 169 centimeters. [Laughs]

NAGAYAMA  That certainly shows how desperate you were! It’s true that officially, new entrants needed to clear 173 centimeters, but I’ve heard that certain applicants who were shorter squeaked in after prior behind-the-scenes negotiations. Dewanoumi, the former yokozuna Sadanoyama and your oyakata, who subsequently became chairman of the Japan Sumo Association, would likely have been in a position to help. Surely, he could have pulled some strings?

MAINOUMI  Frankly, I was expecting him to work his magic. But when the oyakata Kagamiyama, who was in charge of measuring height, clicked the slider on the height scale firmly against my head, I felt as though my knees had buckled. [Laughs] 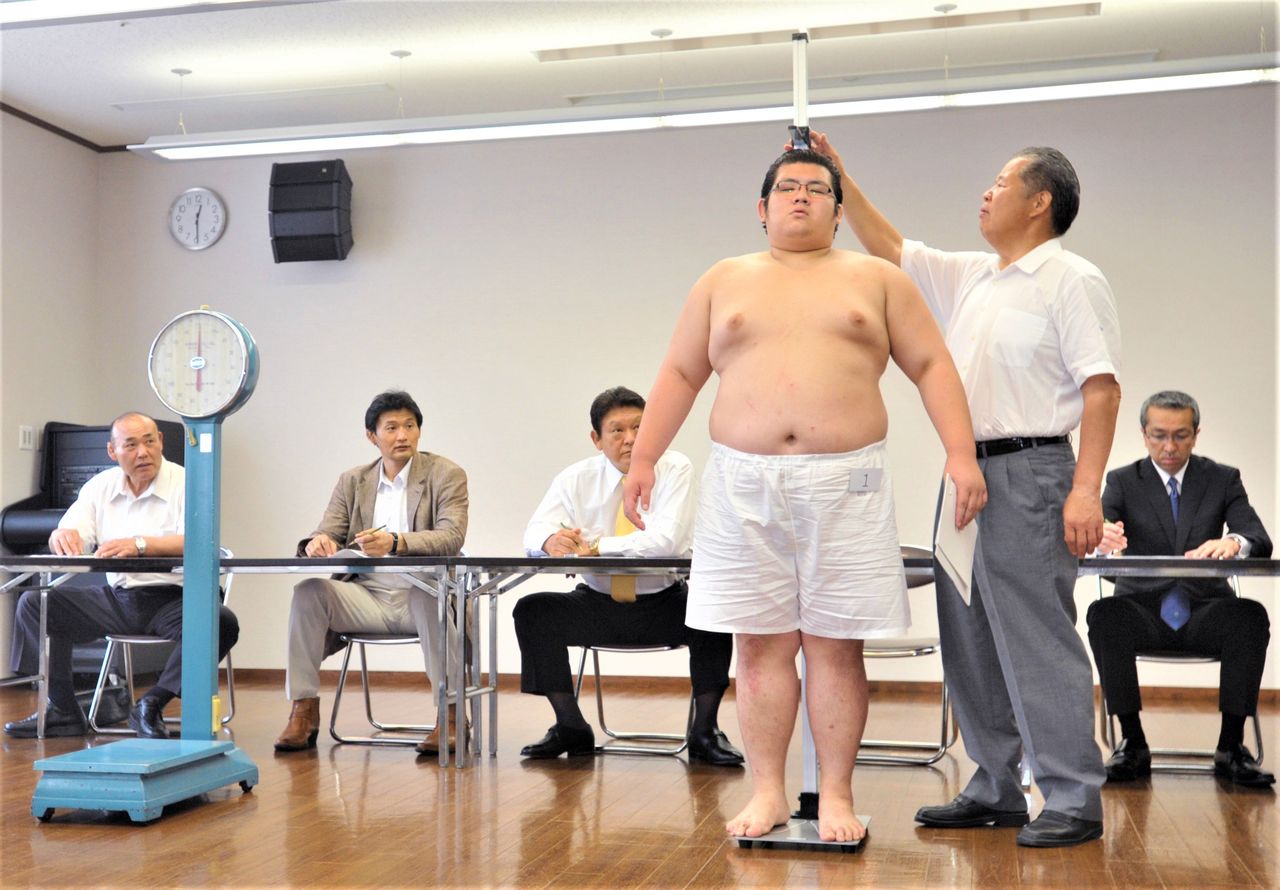 The physical examination for new recruits. An oyakata operates the slider on the height scale and reads out the number to the adjudicators. Taken on July 4, 2011, in Nagoya. (© Jiji)

NAGAYAMA  So,you failed to pass the new recruit physical prior to the March 1990 tournament and tried again at the May tournament, this time after having silicone injected into your scalp by a cosmetic surgeon. Several treatments over a month—cutting open your scalp and injecting silicone above the skull—finally brought you to 173 centimeters.

Ordinarily, you’d have been expected to give up and take up that high school teaching job. What motivated you to go to such lengths?

MAINOUMI  I suppose it’s just the way I am. I was angry at the JSA for imposing that 173-centimeter height requirement. It’s just completely arbitrary. I was going to show them that even somebody under 170 centimeters tall could certainly win, depending on their approach. I was really fired up; I wanted to challenge authority.

NAGAYAMA  You were even more determined the second time around, so in that sense, your first, unsuccessful, try was a blessing. But what you went through sounds pretty painful.

MAINOUMI  When I got up in the morning, my hair would be coming out in clumps and my pillow was covered in blood. The pain was so bad that I felt nauseated all day, and my sense of balance was affected too. Compared to other recruits, I was going through a lot more, so I definitely wanted to make that pain worth it. [Laughs] 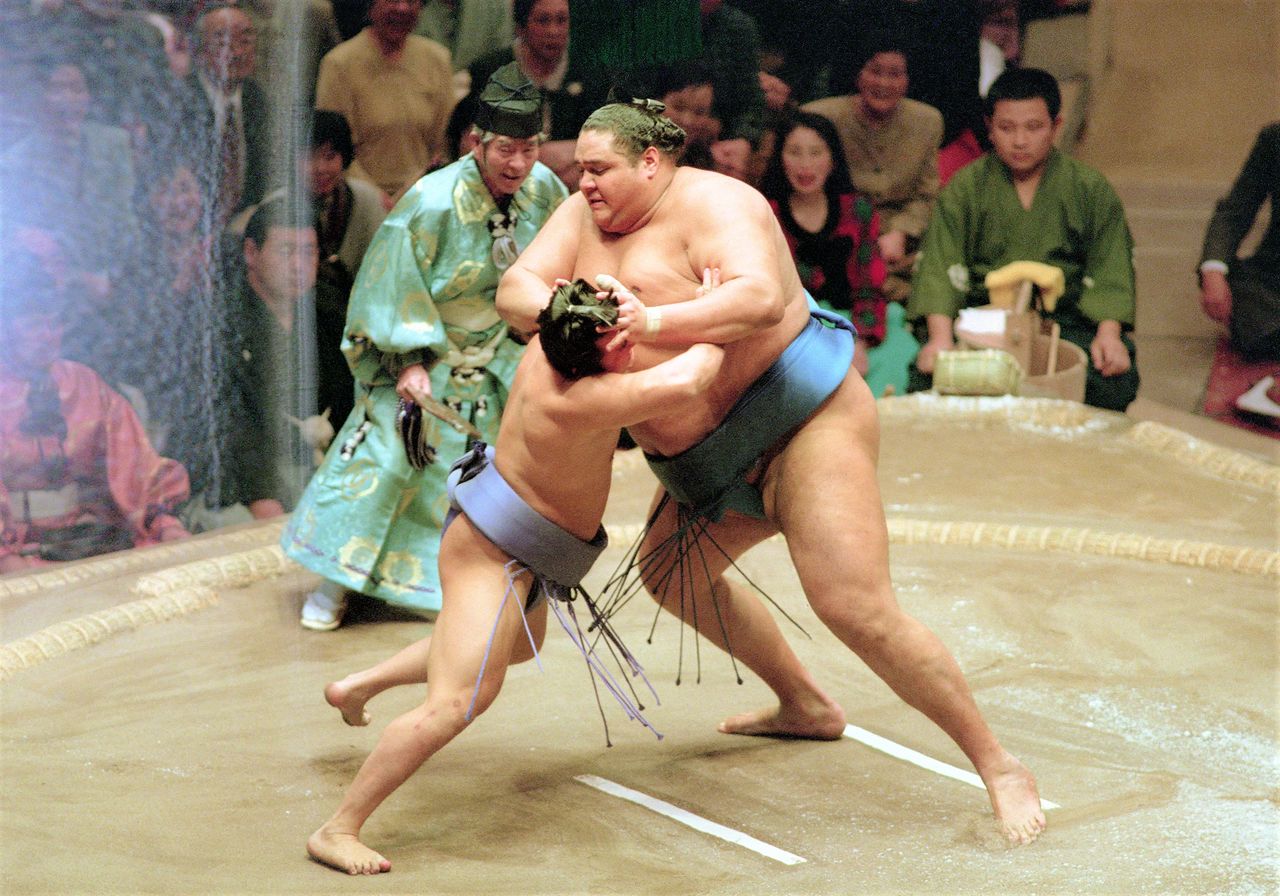 Mainoumi hung on even in the face of a two-handed thrust by 203-centimeter, 230-kilogram yokozuna Akebono on January 12, 1995, at the Tokyo Ryōgoku Kokugikan. Mainoumi maintained that physical size difference with an opponent was not a handicap. (© Jiji) 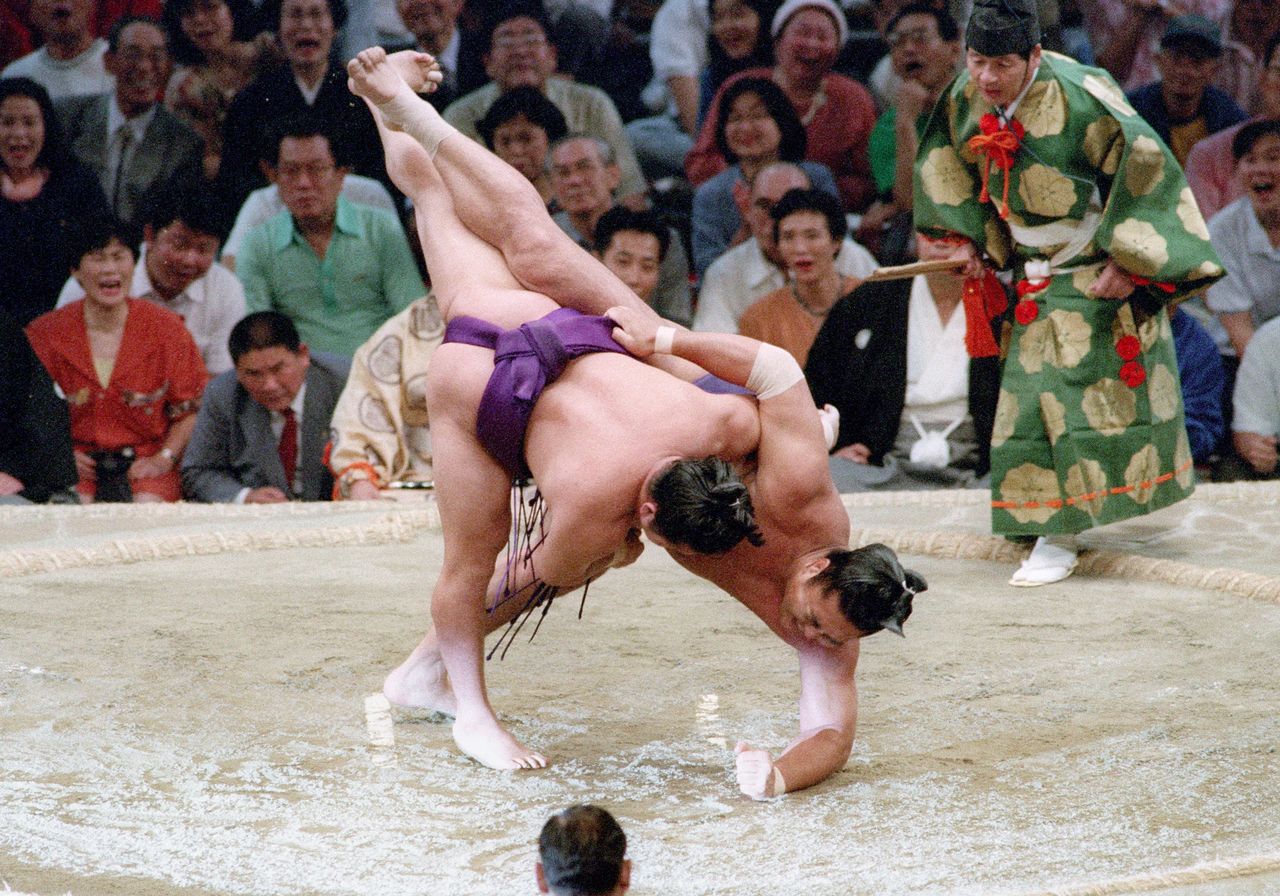 Mainoumi upends ōzeki Kirishima (right) with a spectacular kakenage hooking inner thigh throw. While Mainoumi was known for a broad repertoire of unusual moves, his solid grounding in sumō basics and lower body strength helped him prevail over larger opponents. Taken on July 11, 1993, at the Aichi Prefectural Gymnasium. (© Jiji)

Another Sumō Truism Falls by the Wayside

NAGAYAMA  So that’s where your fighting spirit came from. Now, let’s get back to sumō. In the first part of our interview, you said that the belief among oyakata that the tachiai faceoff is everything in a match has engendered a mistaken notion among both rikishi and sumō aficionados. In your view, even if a rikishi does not get going right at the faceoff, he has a chance to win if he repositions himself. Could you explain this thinking?

MAINOUMI  As part of preparation for my commentary during tournament broadcasts, I visit various stables beforehand to view practice bouts. It’s always disappointing to see rikishi just going into endless repetitions of full-on attacks, as it’s clear they’ve been hearing from coaches that “Everything depends on the tachiai,” “Attack more aggressively,” or “Don’t think; just let your body move.” I disagree with that. I believe the edge of the dohyō ring is even more important than tachiai, and I’m puzzled that rikishi don’t take advantage of the tawara straw bales that form the raised edge of the ring to brace themselves and gain a solid footing. Besides, before they learn to move automatically, rikishi need to understand the logic of sumō and figure out how to move to make their opponent go off balance.

NAGAYAMA  Yes, rikishi can certainly gain a foothold that way, or kick against the edge to gain momentum and bounce back at their opponents.

MAINOUMI  The way to stay in the ring isn’t to bring the foot right up against the tawara, though. You need to stop a bit before, sliding the foot against the edge as you lean forward. That way you can brace yourself and stay inside. It’s too late to push back if you’re already upright. Some rikishi who are larger can try to lift their opponent out of the ring from that position, but for smaller men it’s too late. The minute they feel they’ll be pushed out, they should position their weight-bearing foot so they can push back, and the lower the angle they have against the dohyō edge, the harder they can push back.

Size Is Not All That Matters

NAGAYAMA  Wrestlers these days are getting bigger and bigger, which puts smaller men at a disadvantage, but fans will always be looking for the thrill of seeing a smaller rikishi win.

MAINOUMI  During my time as a rikishi, I always told myself that when I lost, it was because I hadn’t figured out the way to win, not because my opponent was bigger. The dohyo is round, not square; why? And why aren’t there weight classes in sumō? The answer is that there are ways of winning, even if your much larger opponent is lunging at you. My message to smaller rikishi is that they should study the art of winning more deeply. 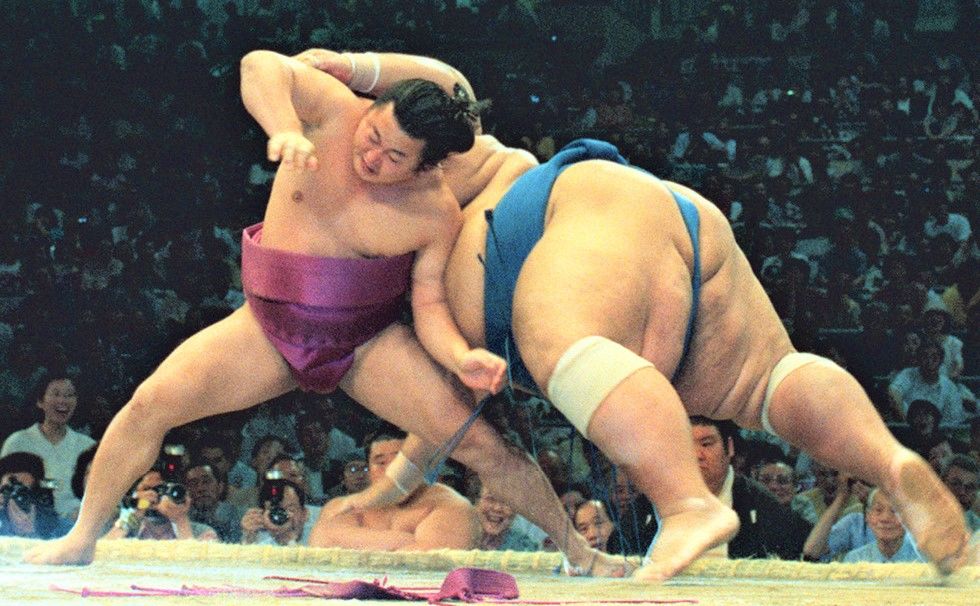 At the July 1996 basho, Mainoumi, pushed to the edge of the ring by 280-kilogram ōzeki Konishiki, overturned him with a shitatehineri twisting underarm throw. After he fell to the makushita division as a result of the severed ligament he suffered when Konishiki fell on his leg during that bout, Mainoumi’s fighting spirit propelled him back to the top makuuchi division. (© Kyōdō) 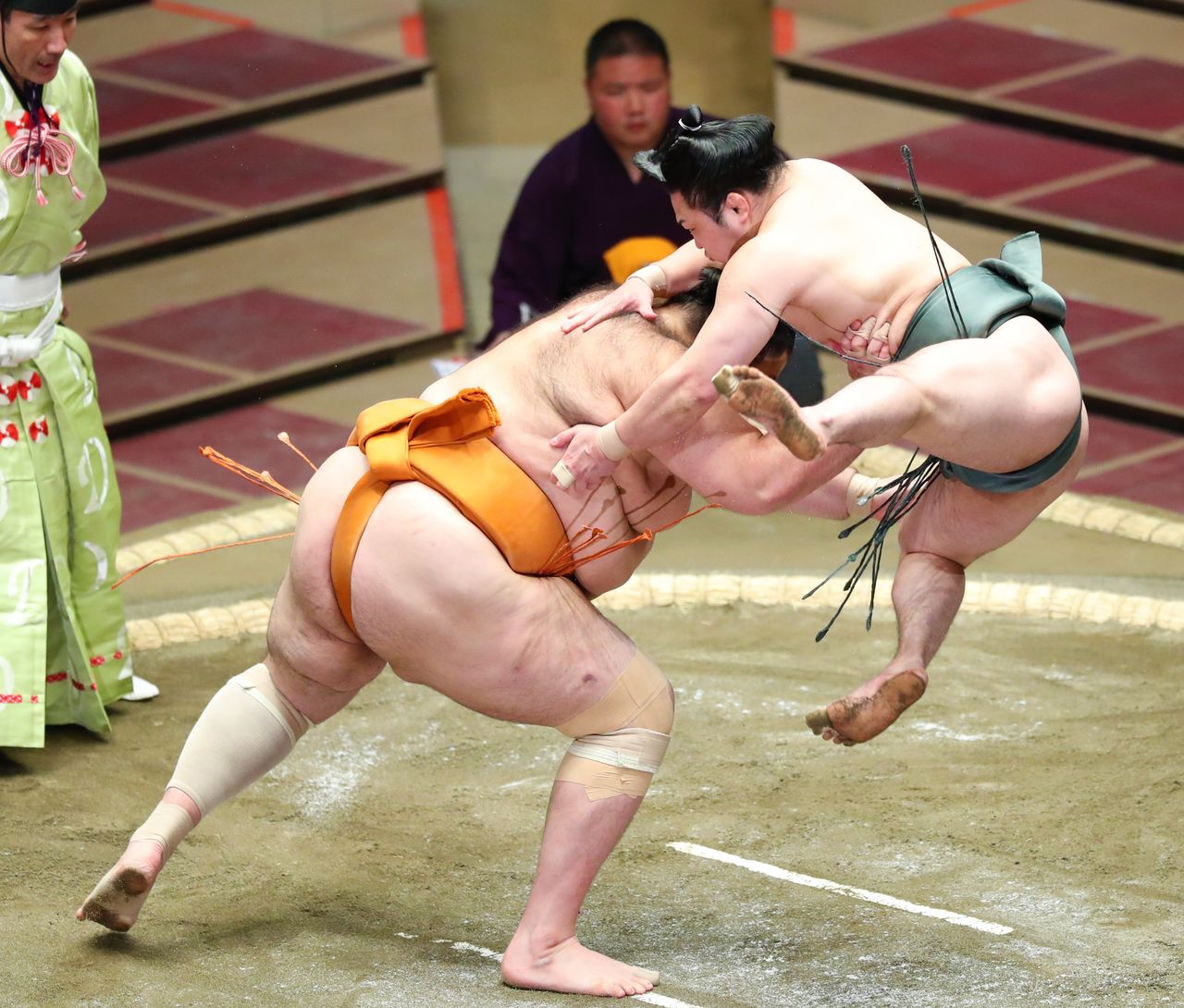 On the second day of the November 2020 basho, Enhō (right) takes a hassōtobi flying leap at the faceoff with fellow maegashira Kaisei. At 168 centimeters and 99 kilograms, Enho’s physique is almost identical to Mainoumi’s. Taken on November 9, 2020, at Tokyo Ryōgoku Kokugikan. (© Jiji)

(Originally published in Japanese. Banner photo: Mainoumi and Konishiki at the faceoff on September 19, 1995, at Tokyo Ryōgoku Kokugikan. Mainoumi later commented that fighting Konishiki felt like grappling with a concrete mound. © Jiji)