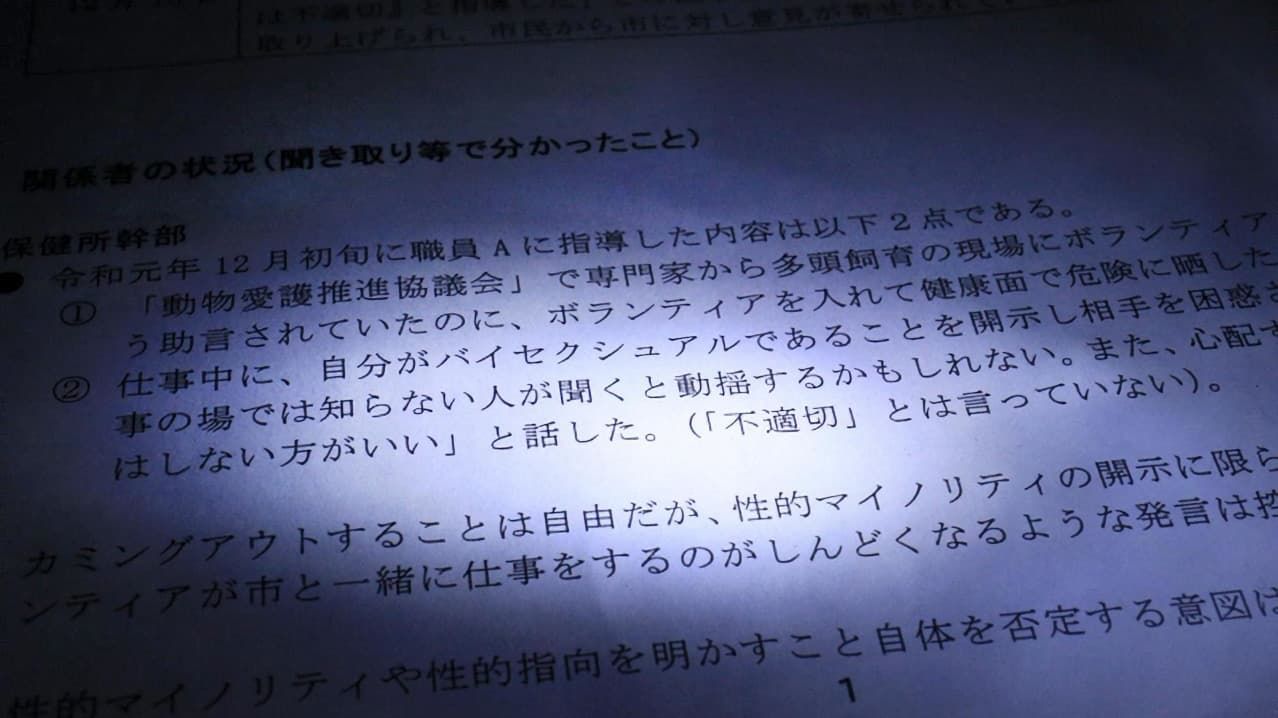 Society Gender and Sex Jun 17, 2022
In 2019, a municipal employee of the city of Amagasaki in Hyōgo Prefecture quit after city officials unintentionally outed him as bisexual to his superior. The city later acknowledged it had violated the man’s human rights, but the incident highlights how unconscious bias impacts LGBT individuals, hampering efforts to make society more inclusive for sexual minorities.

[Kobe Shimbun] Amagasaki, Hyōgo Prefecture, has gone to pains to present itself as a city that recognizes the rights of sexual minorities. However, an incident in 2019 offered a stark reminder of how unintended bias can undermine efforts to make society more inclusive for LGBT individuals.

In November of that year, officials at the city’s public health department received a complaint from an animal welfare organization about a male employee at the department. According to the group, the worker was helping with cat adoption and rescue efforts when the man revealed that he was bisexual. The welfare group took objection to the employee’s candidness, calling his revelation “disturbing.”

Officials reprimanded the man, insisting that he keep his sexual orientation under wraps while on the job. However, the employee had not come out at work, and in dealing with the issue officials inadvertently let slip to his superior that he was bisexual. Shortly after, the man left his position, saying that he had lost trust in the department.

Details of the incident came to light in September 2021 when a city council member questioned officials about the case during a meeting of the body. The council member argued that the male employee had not openly shared his bisexuality to the animal welfare group, but instead had been pressured into revealing his sexual orientation by members of the organization who had pressed him with questions about his marriage status and whether he had a girlfriend. The legislator called out the officials at the public health department for failing to look into all the facts of the case and instead reprimanding the man for behavior it deemed “unbecoming of a civil servant.”

This prompted a weak response from the head of the city’s internal affairs department, who promised to conduct sensitivity training for municipal employees. However, Amagasaki took no further action on the matter at the time.

The city’s complacency would come back to bite it, though. In December 2021, the Kobe Shimbun reported about the incident, prompting a deluge of telephone calls and emails from around the country demanding that the public health department officials be fired. Up to then, Amagasaki had been seen as a leader in addressing LGBT needs, including for removing boxes designating gender from official forms and introducing a partnership system that recognizes sexual minorities. Mayor Inamura Kazumi had openly touted the city’s embrace of the LGBT community, but she and others at city hall suddenly found themselves having to admit that they had misjudged the level of acceptance of sexual minorities.

A Case of Outing

Through an information request, the Kobe Shimbun attained 36 pages of documents from Amagasaki that included minutes from meetings of a working group of the expert committee charged with investigating the incident. The transcripts revealed that when interviewed, the man’s supervisor at the health department said that sexual orientation was a choice and likened it to a “private concern,” such as becoming ill or falling into debt. This stance influenced the response of the superior, who wanting foremost to avoid troubling residents rebuked the man for his actions, including saying that he needed to “learn to choose his words.”

Committee members were quick to call out these actions. They staunchly refuted the supervisor’s statements comparing sexual orientation to illness and debt. They also called the line of questioning from the animal welfare group a case of sexual harassment and strongly urged the city to address issues of discrimination.

Members also admonished department officials for their lack of sensitivity, saying that they had in essence outed the man. According to city records, officials asked the department to confidentially look into the claims of the animal welfare group. However, the employee’s superior was included in the disciplinary meeting and learned about the man’s sexual orientation without his consent.

In 2015, the suicide of a graduate student at Tokyo’s Hitotsubashi University after being outed as gay by a classmate propelled the issue into the public consciousness and drew attention to the mental anguish suffered by victims. Since then, Kunitachi in Tokyo and Mie Prefecture have introduced anti-outing ordinances that, if applied in the Amagasaki case, would have found department officials culpable for violating the human rights of the city employee.

Speaking to the press, a visibly upset Mayor Inamura recognized the pain the incident caused the employee while also admitting her own unconscious bias, saying that if she had been in their position, she might have acted in the same way as the department officials. She then went on to say that the city was taking steps to improve the sensitivity training municipal employees receive.

In its March 2022 report, the investigating council stated that in its rush to deal with the complaint, the city failed to recognize underlying issues of discrimination against the employee. It noted that issues concerning sexual minorities are too often dealt with solely from the perspective of the heterosexual majority, such as with department officials deciding that an employee’s sexual preference is a “private concern.”

(Translated from Japanese. Banner photo: A copy of the minutes from the investigatory council meeting. Article and photo by Hirohata Chiharu.)